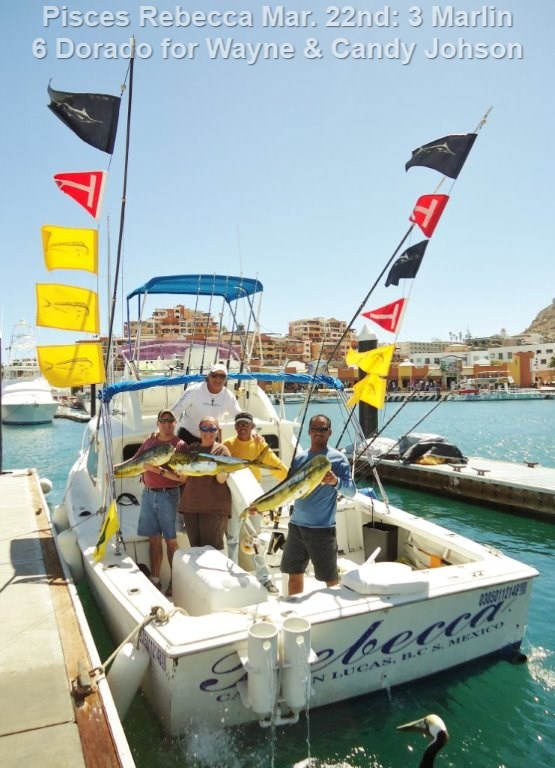 BILLFISH: This week was the poorest so far of the year, overall for fishing. A full moon combined with very windy weather and a drop in water temperatures was the recipe for slow catches. That is not to say that the fish were not there; first it was hard to get to where the fish were on several days due to the rough seas caused by the wind. Crews could not depend on the Golden Gate at the start of this week & had to go the other direction to Destiladeras and Punta Gorda on the Cortez side.  The striped marlin were not as easily found as they had been on the Pacific and when spotted were not that hungry, as they had been feeding all night, which accounts for our low catch rate of just thirty percent. When marlin catches did occur it was usually just a single fish; the exception was Pisces La Brisa who released three striped marlin caught on combination of ballyhoo & caballito, twenty miles out from Land’s End of Frank & Kelly Chapman from Wyoming on March 18th.  As the week drew to a close boats again ventured into the Pacific where they did slightly better, however, there were days when even the best boat and crews, drew a blank. Pisces anglers released a total of 25 striped marlin in the 110 to 160 lb. class. 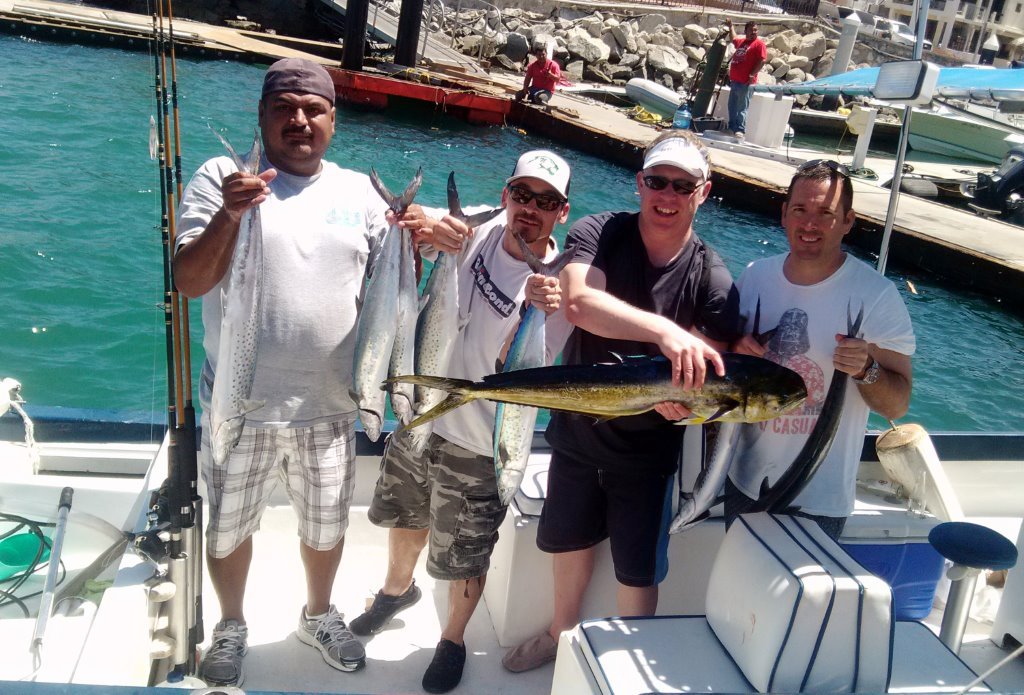 OTHER SPECIES: Inshore and smaller game dominated the catches this week with forty five percent of our charters catching skipjacks, sierra, rooster fish, trigger fish and lesser number of pompano, yellow tail, amberjack & bonitas.  Pisces Ruthless released five roosters up to 25 lbs. for John Ropas from Lubbock, Texas and was the high catch boat for this species. Not only roosters, but Ruthless also had two hammer head sharks at the 95 spot, both released for Jack Suddarth from Newport Beach, Ca.  Dave Fairfield released a mako shark aboard Listo as well as Kelly Wood, who also released one aboard a panga. None of the sharks were huge at around 50 lbs. each. We had a single wahoo, smallish at 25 lbs. aboard C Rod. Seeing as boats fished the Cortez side on several days, there were able to pick up some dorado, mostly around Punta Gorda, with catches between one and three dorado up to 30 lbs., giving us a catch rate of twenty one percent and a total of fifteen fish. Tuna catches were very slow with just a few here and there caught.
LOCATION: Punta Gorda, Destiladeras, Herradura, 95 spot, Cerro Colorado, Pedregalito, San Jaime, Margaritas, 30 miles from 210 spot.
WEATHER CONDITIONS: Sunny, extremely windy on some days, seas, choppy to moderate.
AVERAGE WATER TEMP: 71-72 F (warmer than past years for March)
BEST LURES: Live bait, caballito, ballyhoo, green color lures.