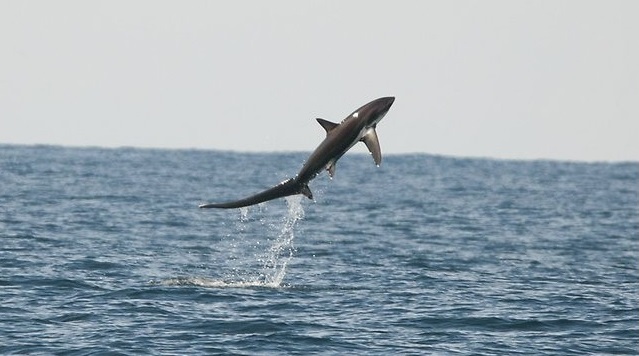 BILLFISH: This week saw great fishing in the Los Cabos area, with hotter than normal weather producing some great catches. We did not have as many sheer marlin numbers this week but boats regularly caught between one and four billfish each. The fishing moved a little northward, towards Punta Gorda, but the 11.50 spot still produced the goods too. The marlin are ranging in size from 90 to  180 lbs and are taking live bait. Darren Wyckoff from Spokane, Washington aboard Pisces Rebecca one of a half dozen boats that achieved four marlin in a day  – he also caught a nice 30 lb dorado for the table on May 17th. May 19th was a day when we saw big stripers, with La Brisa releasing one just over 180 lbs for Milford Ballard & Steven Jones from Amarillo & Corpus Christ, Texas; their other three marlin were feisty, but not as large. With eighty six percent of boats catching marlin, those that didn’t were deliberately looking for something else  – and they succeeded as every boat we sent out caught fish this week. Hot, weather, nice seas  – we even saw schools of bait, right on the shoreline of the main beach. It shows the weather is beginning to warm up as we released a couple of sailfish this week. John Ireland reporting seeing  700 lb swordfish that he followed around for an hour and a half trying to get to take his bait – with no success, but we did receive a picture from Bob Manroe who actually caught one, we don’t have the details but it looks to be between 300 -400 lbs. Pisces anglers caught a total of 99 striped marlin & 2 sailfish this week, with all but two fish released.
OTHER SPECIES: What really surprised us this week was the number of sharks, we have never seen shark catches like these, with threshers, hammerheads & pilot sharks being found in with the marlin. We caught a total of 20 sharks this week, with the majority of them released, but boy, did our equipment take a beating.  For example, James Haefner, Maurice Sherman & Jeff & Leslie Taylor, were out on Pisces Bill Collector on May 20th and released two striped marlin, a 140 lb thresher shark and a 160 lb thresher shark that took them three hours and forty minutes to subdue. This same day both Ruthless & La Brisa also released a thresher shark as well as marlin. Bill Collector seemed to be the shark boat this week, as they released three pilot sharks up to 180 lbs AND a thresher shark and a striped marlin – all on May 22nd for the Mann family from Detroit.  Rebecca earlier in the week released two thresher sharks up to 130 lbs, plus a hammerhead shark and two striped marlin for our good friends Gerald Richmond & John Mason. Please note that there is a ban on hammerhead sharks for any kind of fishing as of May 17th until June 17th, there is also a permanent ban on catching white sharks by any method in Mexico.  Dorado catches were on the slow side with just five boats finding fish up to 30 lbs. There were no yellowfin tuna but we did hear of some nice ones in the East Cape are. The pangas that we sent this week did well on skipjacks and also got few jack crevalles and amberjack, plus the odd dorado.
LOCATION: 11.50 spot & Punta Gorda.
WEATHER CONDITIONS: Nice – except Thursday when we had some wind in the early morning hours, followed by a little rain. Seas are calm.
AVERAGE WATER TEMP:78 F
BEST LURES: Live bait.