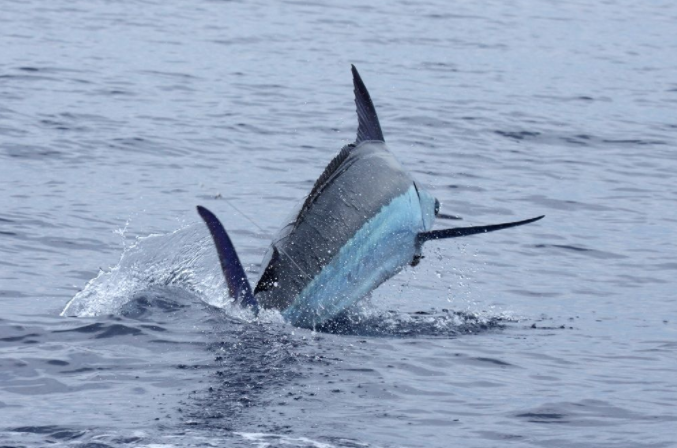 Andrew and Jennifer Stutzman didn’t know what they were in for when they signed up for a trip aboard Tiburon, one of Pisces standard cruisers, a 31 ft Bertram. Andrew a 38-year-old pilot for American Airlines was excited to venture out with his bride for his first ever marlin fishing trip. The couple who are from Texas, were introduced to their crew that morning; Bruce Monta?o as Captain and Abraham Castro, (son of the famous Julio Castro of Tracy Ann). They headed out to the Pacific in search of big game and the crew settled on a spot about ten miles out from the Old Lighthouse. It wasn’t long before they spotted a striped marlin and deckhand Abraham expertly cast live bait to the fish that eagerly ate and the fight was on. Andrew & Jennifer were pleased, here they were already hooked up to a marlin; what they had come for.  The fish was safely released and swam off after about a 20-minute fight.

Lines were put back with lures, deckhand Abraham had a live bait rod ready and Captain Bruce was trolling a dead bait from up on the flybridge. Andrew suddenly shouted to the crew, they turned and saw the water stirred up and an enormous splash. The fish charged the dead bait and the captain quickly handed the rod to the deckhand as he manevoured the boat into the perfect position. They had a solid hookup and a big blue marlin that jumped and landed close to the boat. The fish jumped again and the crew was glad that he fish had hit on the 80 LB rig and not the smaller equipment they use for striped marlin.  The Stutzman’s had no idea of what they were in for and neither did the crew. The fish was very big, strong and appeared tireless. Andrew faithfully worked away for hours, from around 10.30 am to 3.00 pm then Jennifer took a turn for almost two hours but the fish refused to be tamed.  By this time it was late in the day and the anglers were exhausted so the crew took over the rod. At 6.00 pm the dockmaster called them to see if they were in need of help or if another boat should to be sent out. Then crew spoke with the anglers, with Jennifer saying, “we came out with you, we go back with you” not knowing they had many hours still to go. Andrew was hungry and thought longingly of The Office, where they had reservations that night and realized that there was no way there were going to make it.

The fish never wavered in strength and continued to jump into what was now nighttime.  The crew fought on until after 9.30 when Andrew said to them “you are the professionals we are not, we are hungry cold and tired and want to go back”.  Reluctantly, the crew put pressure on the line and broke the fish off and it disappeared silently into the depths. The crew was disappointed as the fish was estimated to be at least 600 LBS, but nevertheless it had been an incredible experience and maybe they will meet this fish again some day. Abraham who is studying to be a lawyer even missed an exam at university to fight this fish, but said it was worth it to have lived such an incredible experience, one of the best of his fishing life.

The anglers were cold and tired and finally made it back a little after 10.00 pm, an experience they are sure never to forgot but perhaps not exactly what they had dreamed of; they would have been happy with the striped marlin early in the day and their dinner at The Office.