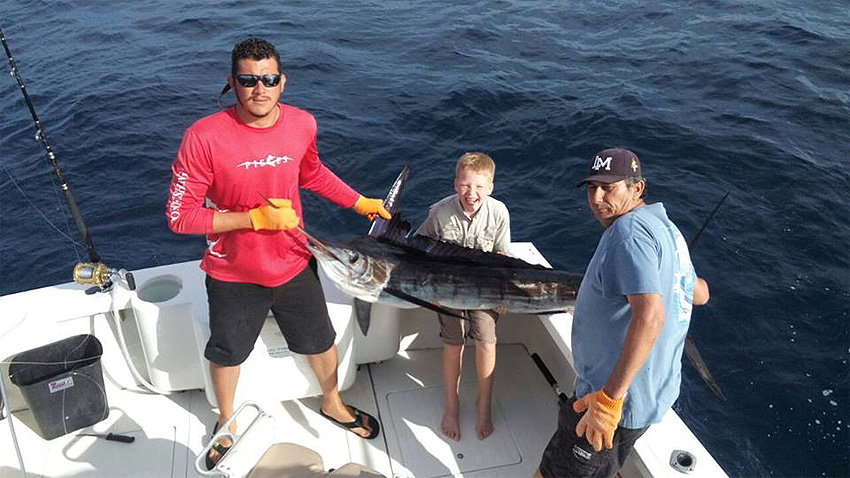 BILLFISH: We’re back! Finally after months of small game fishing we saw a return this week to the big stuff. We were pleased to see more consistent billfish catches and even multiple marlin catches for some boats. At the start of the week the hot boat was the Hot Rod as they released three striped marlin up to 150 LBS and SIX pilot sharks up to 130 LBS all caught at the 11.50 spot by Kevin Bremer, James Snyder, Pamela Snyder, Jesse Jernigan & Sam Jernigan – a pretty busy days for these lucky anglers. Our 35 ft. Cabo Listo celebrated 5 de Mayo in style as they also released three striped marlin and released a large pilot shark for a group of Mexican anglers from Monterey, mainland Mexico. Another boat with more than one marlin was Pisces 31ft Bertram La Brisa; they released two striped marlin at the 11.50 spot for the Collins and Lancers from Maryland, who also did well to release an 180 LB pilot shark and a 110 LB thresher shark. Forty nine percent of our charters caught marlin this week, not fantastic, but definitely on the road to recovery with a total of 23 marlin released this week.

OTHER SPECIES: The killing of sharks’ ban that runs from May 1st to July 31st went into to effect this week and it’s like somebody told them they were safe as they showed up by the dozen. Anglers are allowed to catch and release them during this period but cannot kill them or bring a dead shark back to the dock. Pisces Tracy Ann released a total of SIX pilot sharks, a large 180 LB thresher shark and a striped marlin for 10 year old Bentley Willcott who was on a special birthday trip to Cabo with his dad Matthew from Texas. Henry & Kaitlin Troutner from Virginia had a great time battling three thresher sharks up to 180 LBS and a pilot shark, all caught on live caballito. Hot Rod made the fishing report a second time for having the most variety of sharks with a thresher, a pilot and mako shark, as well as a striped marlin released for the Sutton family from California. Seventy three percent of our charters caught sharks this week giving a total of 49 sharks released.  Just a couple of boats caught dorado and tuna catches were on a par – all small fish. Small game catches continued throughout the week but to a lesser degree with forty six percent of boats catching grouper, ladyfish, triggerfish, babosas, sheephead, skipjacks, roosterfish and one solitary wahoo that was around 40 LBS.

LOCATION: Marlin and shark were caught in the Sea of Cortez between Santa Maria and the 11.50 spot. Smaller game were on the Pacific at Migrino.

WEATHER CONDITIONS: Partly cloudy, windy on the Pacific, lighter winds on the Cortez side.

Based on the catches of Pisces of Tracy Ehrenberg