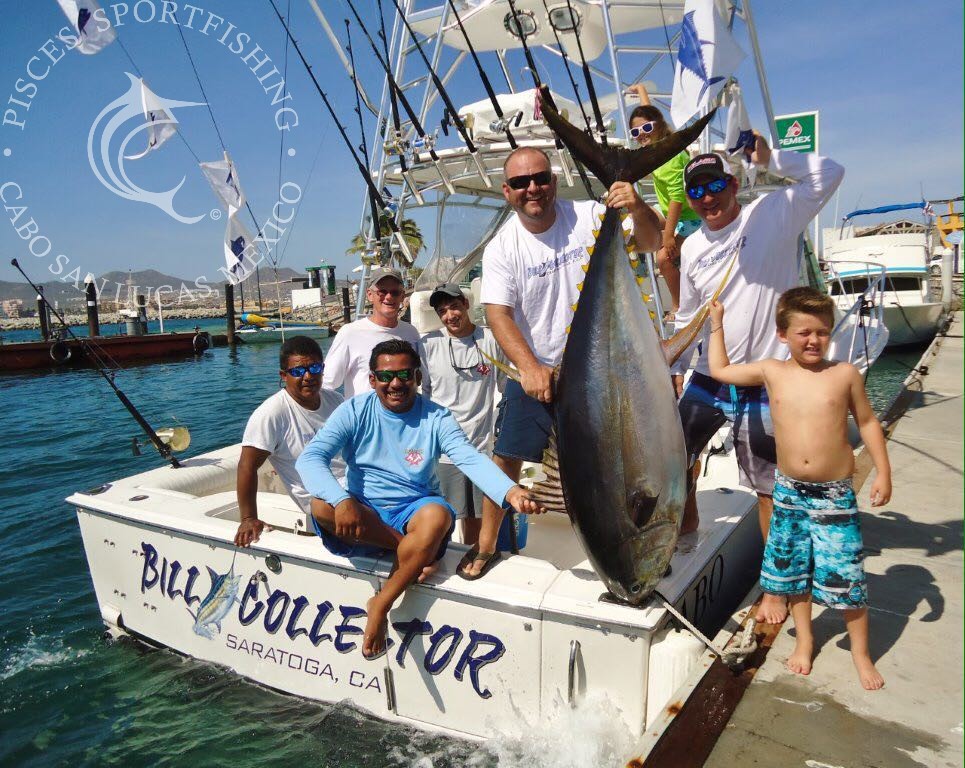 MARLIN: This week marlin catches remained steady, but with the influx of schools of tuna many boats opted for eating fish and not strictly marlin. Catches slowed a little as the moon grew and strong winds provoked rough seas on several days. Top boat this week was definitely Pisces Hot Rod our 42 ft. Cabo. On June 17th she had a fabulous day with six striped marlin released by David Whiting, Casey Whiting and Jordan Stout, along with three small tuna and a dorado boated. This same day was good for Pisces Listo II a 48 ft. Viking, with four marlin released up to 140 LBS and a 100 lb. pilot shark released for a group from Dallas headed up by John Wiggins. A couple of days before this it was the 35 ft. Cabo Pisces Knot Workin that has the best day, just three miles from Cabeza de Ballena with Matt and Angela Husky from Tampa, Florida on board. They managed to catch and fight four large striped marlin, with the top fish just over 160 LBS, on live caballlito.  The Ackernecht and Costa families from California fished together on the ever popular 31 ft. Bertram Pisces Rebecca on June 13th and with six anglers on board Captain J.R went above and beyond to make sure each person caught a fish. They ended up with three striped marlin up to 140 LBS released, a 120 LB pilot shark released and four nice dorado for the table.  On June 11th Javier Casillas and friends from La Paz and Cabo San Lucas were out on this same boat and were able to fight three striped marlin up to 140 LBS. Other catches were of one or two marlin usually with a few tuna thrown in. Forty one percent of our boats caught marlin this week, giving us a total catch of 57 marlin – remember we go where the fish are -all but three of the marlin were released. 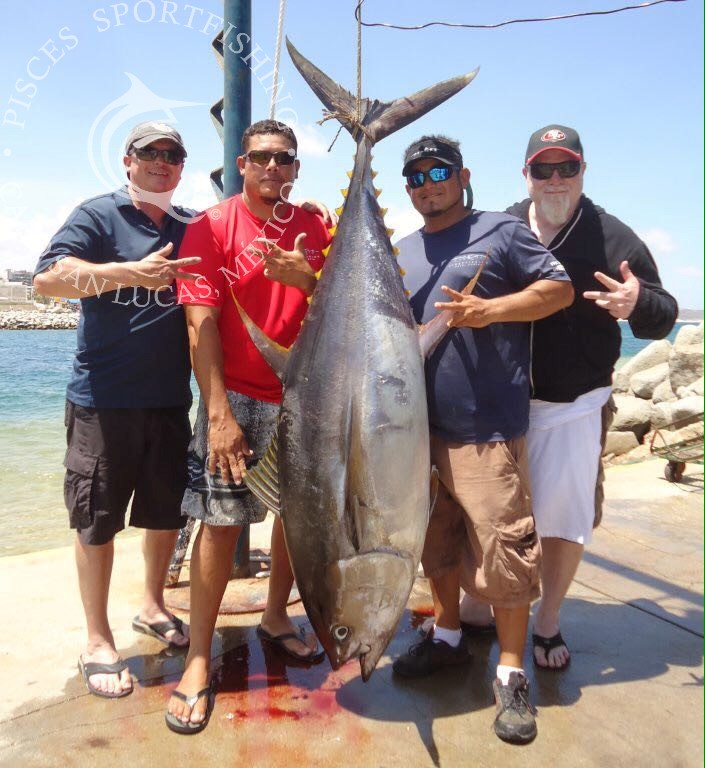 OTHER SPECIES: You could have almost called it “Tuna Week” as they were the most prolific catch this report; in fact our total tuna tally was 451 fish. The majority of the tuna were school size fish from 5 to 30 LBS, with many released. There were however, a couple of very nice exceptions, both caught on the same day. Pisces Ruthless, one of our 31 ft. Bertram’s managed to catch a total of 30 tuna, with many released in one day for Brian Gernand and Johnny Berry from New York. They went out again June 17th, on this same boat and had their work cut out when they hooked a tuna that took them one and a half hours to land; it was worth it though, it tipped the scales at 205 LBS after taking a tuna plug at the Herradura. Just a few pounds behind this fish was Pisces Bill Collector ‘s fish which weighed in at 197 LBS the largest of fourteen tuna they caught that day plus a striped marlin released for Mark Chiavetta and friends from San Jose, California. Forty seven percent of our boats caught between one and eighteen tuna in the 5 to 25 LB class. Dorado catches remain a bit slow with just sixteen percent of boats finding smaller examples of this species. Catches were usually a single fish and occasionally up to four, with the exception being Pisces Rebecca who managed to catch eleven and release ten – the fish they kept was 20 LBS, the others that were released were very small.  We had several sharks again this week, with most being pilot sharks up to 120 LBS. A Mako was released on the Panga Jessica who was also fortunate to release a striped marlin and catch a small tuna and skipjack.  It was nice to see fair amounts of roosterfish this week, with Tim Osterman from Missouri able to catch two aboard the Panga Pichurro that weighed approximately 35 and 40 LBS. Other small game catches were of jack crevalle, sierra, amberjack and skipjacks.