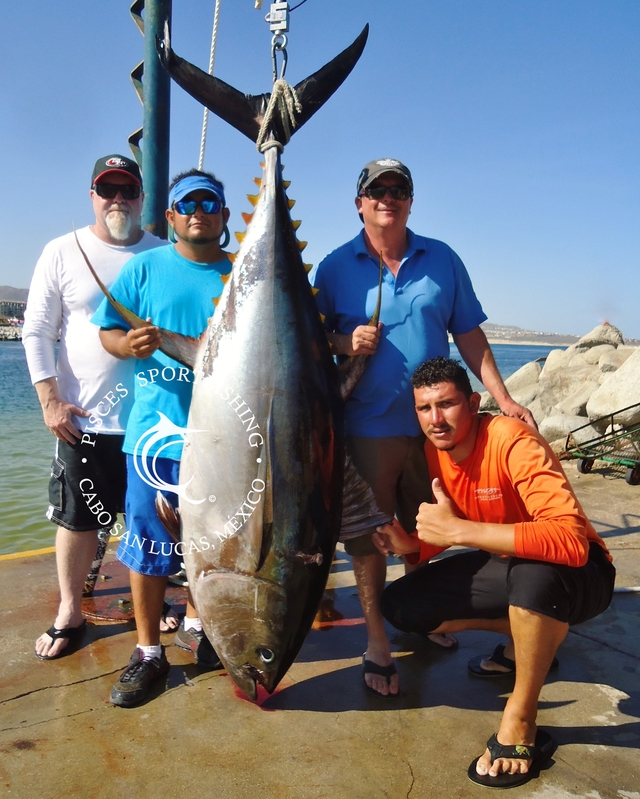 BILLFISH: This week we saw fishing take a bit of a downward turn with catches dropping below previous weeks’ level, that is not to say that fish are not here, they are, but not that hungry. Of course we had a full moon this past week which is thought to be a determining factor in catch rates. Many fishermen believe that with a big moon the fish can feed during the night due to heightened visibility and then are not as hungry during the day.  The colder water that had been contained on the Pacific has now edged into the Cortez around Cabo which is also a factor. Many boats saw marlin and even hooked them, but getting them to stay was often another question. It is also said that a big moon is good for blue marlin and we did hear of a 450 LB blue marlin being caught aboard El Chivato. Some boats were more fortunate than others; Pisces Tracy Ann was the only boat to do really well on June 22nd, with John Ettlin on board from San Diego. John was able to catch and release two striped marlin and a sailfish and then add four small tuna for the table. This boat had headed out on the Sea of Cortez side to the Cabrillo sea mount and caught their billfish on live bait and their tuna on cedar plugs. June 24th saw Pisces Ruthless do well the first day of the Stars and Stripes tournament – they went out 52 miles, but it paid off with three striped marlin released. Pisces Shambala also got one scoreboard the first day of the event releasing two striped marlin and weighing a 15 LB dorado. Just twenty seven percent of our boats caught marlin this week resulting in total catch of 19 fish released.

OTHER SPECIES: Top catch this week was again yellowfin tuna with some very big fish caught. The largest took a muscle exhausting five hours to land for John Berry from Bell Canyon, California aboard Pisces Ruthless. John’s fish tipped the official scale at 283 LBS and took a cedar plug outside the Herradura. This same day John and his friend Brian Gernarnd caught an 89 LB and 78 LB tuna, both respectable fish also.   Tampa Florida angler Joey Puleo and friends out on Pisces Valerie caught a beautiful 197 LBS tuna on a red and black lure and a 136 LB tuna on a petrolero lure 16 miles from the 180 spot. John Ettlin and Andrew Tochterman headed out for a second trip on Pisces Tracy Ann on June 20th and ran out 45 miles in search of tuna. It paid off; they were able to boat a nice 135 LB fish as ell as a smaller one. The big fish took a red and black lure. Thirty eight percent of our charters caught between one and sixteen tuna with the majority of the catches being small fish in the 10 to 25 LB class. Dorado catches have not taken off so far this year, but we are seeing that slowly starting to change, nevertheless nineteen percent of our boats found dorado but usually very small in size. Pisces Ruthless had the Baldwin’s and Tuckers on board and headed up the Pacific to San Jaime, where they released ten small dorado as well as a striped marlin.  Our total dorado count for the week was just 23 fish. We had a hammerhead shark released from a panga as well as a 130 LB hammerhead, also released aboard Yahoo. Captain Benito, out on a half-day trip aboard Listo released two pilot sharks and a skipjack. Inshore we had a few skipjacks, jack crevalle and triggerfish.

LOCATION: All over, but mostly Cortez side, 6 miles off of Lands End, Destiladeras, Cabrillo, below San Jaime, Herradura, boat were travelling up to 50 miles.