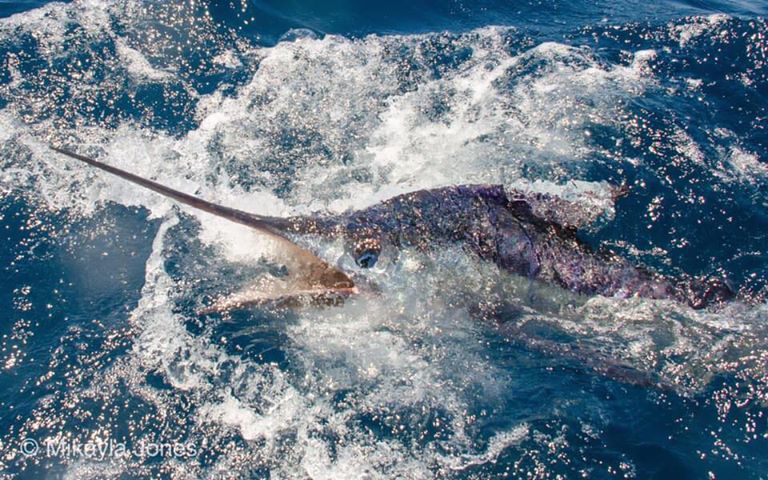 Striped Marlin caught and released on Pisces 31′ Tracy Ann by the Jones family.

Although this week presented one extraordinary catch, with the 814 lbs Blue Marlin caught by Pisces 31′ Tiburon (which is actually presumed to have weighed more than that.. more on this later), most fishing this week was somewhat inconsistent. April tends to have more inconsistencies in the fishing, compared to other seasons, and these past weeks have been hard to peg. The fish have been moving quite rapidly and the bottom fishing and small game have gotten quite some pressure from all Cabo fleets because of it. The tuna on the other hand, have turned up again, even if far out and even if not the largest specimens. There still have been a few marlin releases, with 1 marlin released per boat on average, and a great day looking at 5 striped marlin released at Golden Gate. A few dorado sprinkled in to the catches of sierra, roosterfish, ladyfish, jack crevalle and yellowtail.

April 14th will be a day to remember for Pisces anglers Sam Ferrans, Mark Molnar, Dinesh Poudel and Curtis Paul, who fished aboard Pisces 31′ Tiburon and caught the 814 lbs Blue Marlin. The full story on this catch is found in our “News” section HERE. But still, some controversy has surrounded this fish, which at 167.5″ and 66″ around, that is, almost 15 feet long and almost 6 feet around only weighed 814 lbs. We all know that the scale used to weigh the fish is not “certified” and so cannot claim this weight as the official and free of error. Using measurement calculations to figure weight it comes out to 1,072 lbs when dividing by 650 which is what is used for Pacific marlin, and if you divide by 800 which is what you use for Atlantic marlin, it is 871 lbs. ” Either way, we will never really know the ‘official’ weight, but a great effort by anglers and crew, will be remembered for a long time coming. 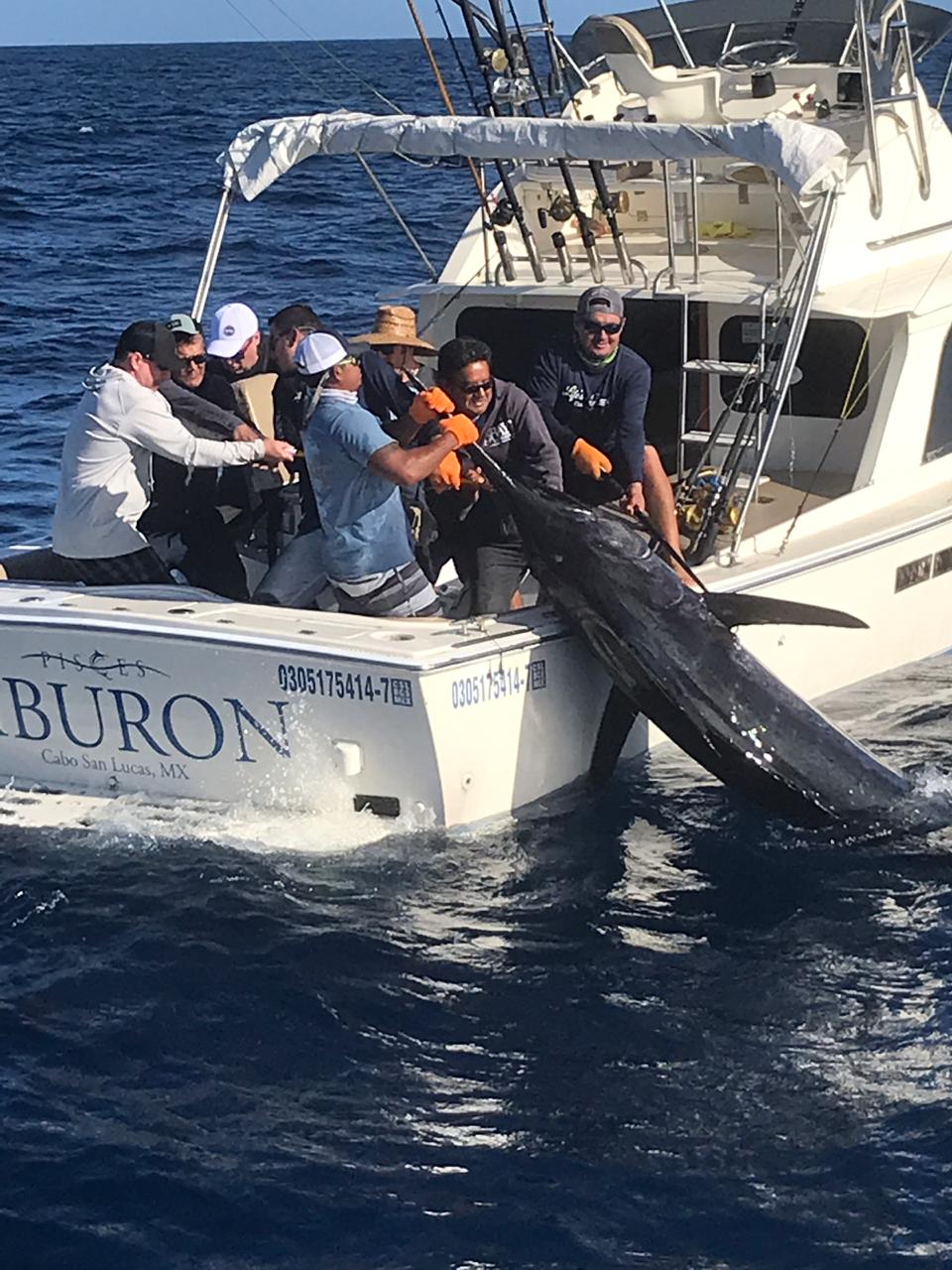 This same day actually, the 35′ Bill Collector 2 went in search of marlin and released five total. The marlin ranged in size from 80 to 120 lbs each and hit on mackerel batt at Golden Gate.  Pisces 38′ C Rod also had a great day later in the week, releasing 1 striped marlin at Golden Gate along with 20 yellowfin tuna, all weighing between 10 and 20 lbs each on mackerel bait. 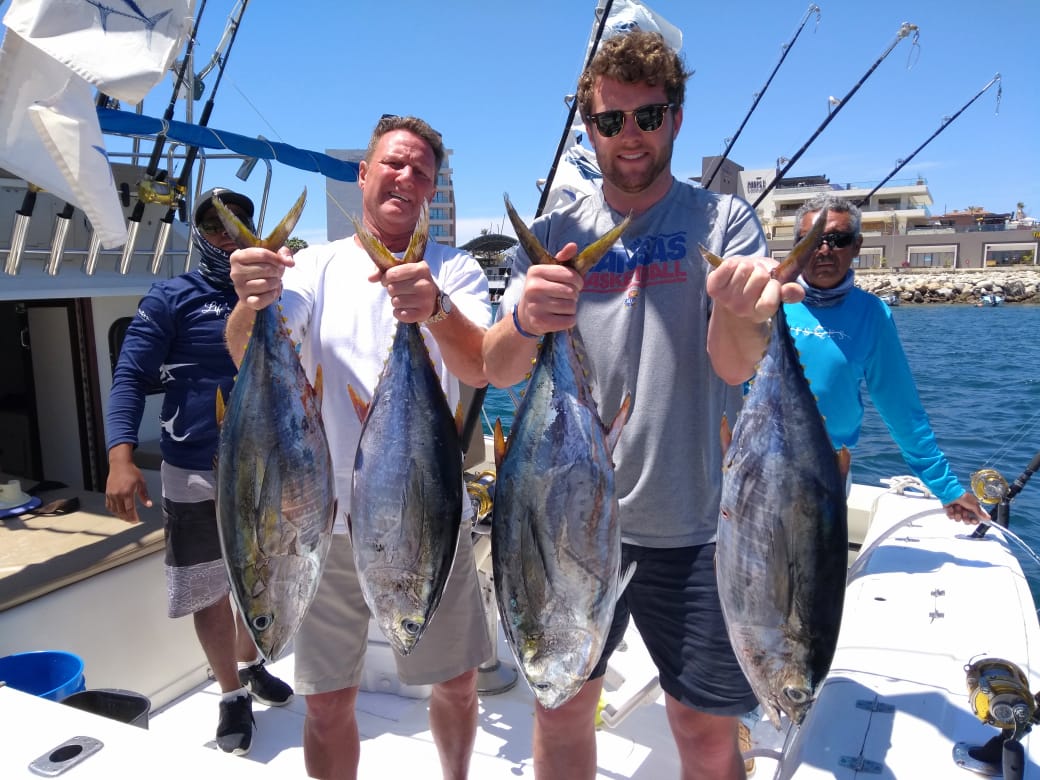 Pisces 31′ La Brisa also had luck in releasing marlin this week, with 1 striped marlin released at Herradura. The marlin hit on ballyhoo bait, and 5 yellowfin hit on cedar plugs. For more tuna, Pisces 31′ Rebecca, landed 16 yellowfin on April 16th, although all were about football size. Found just outside of San Jaime, hitting on cedar plugs. Later in the week the Rebecca would land 2 of the only 3 dorados caught this week.  Anglers Hilary Andrews and Naeem Khalid caught both dorado, about 15 and 20 lbs,  outside of San Jaime on caballito bait. Pisces 31′ Ruthless would also catch a dorado later in the week, also out of San Jaime, but would release it, as it was only about five or so pounds. The anglers aboard did, however, get to keep their tuna, all 20 of them that hit on cedar plugs at san jaime. Tuna weighed between 2 and 20 lbs each.

Pisces 31′ Tracy Ann really hit the jackpot with tuna on their outing, landing 26 yellowfin about 42 miles out, close to San Jaime. Similarly, the Pisces 32′ Bill Collector caught 20 yellowfin between 10 and 20 lbs each on cedar plugs and the 220 Spot. Anglers were the Gros family form Texas. This same day, Pisces 31′ La Brisa also landed 26 yellowfin, these were found at the 230 Spot, about 40 miles out, again on cedar plugs and feathers. 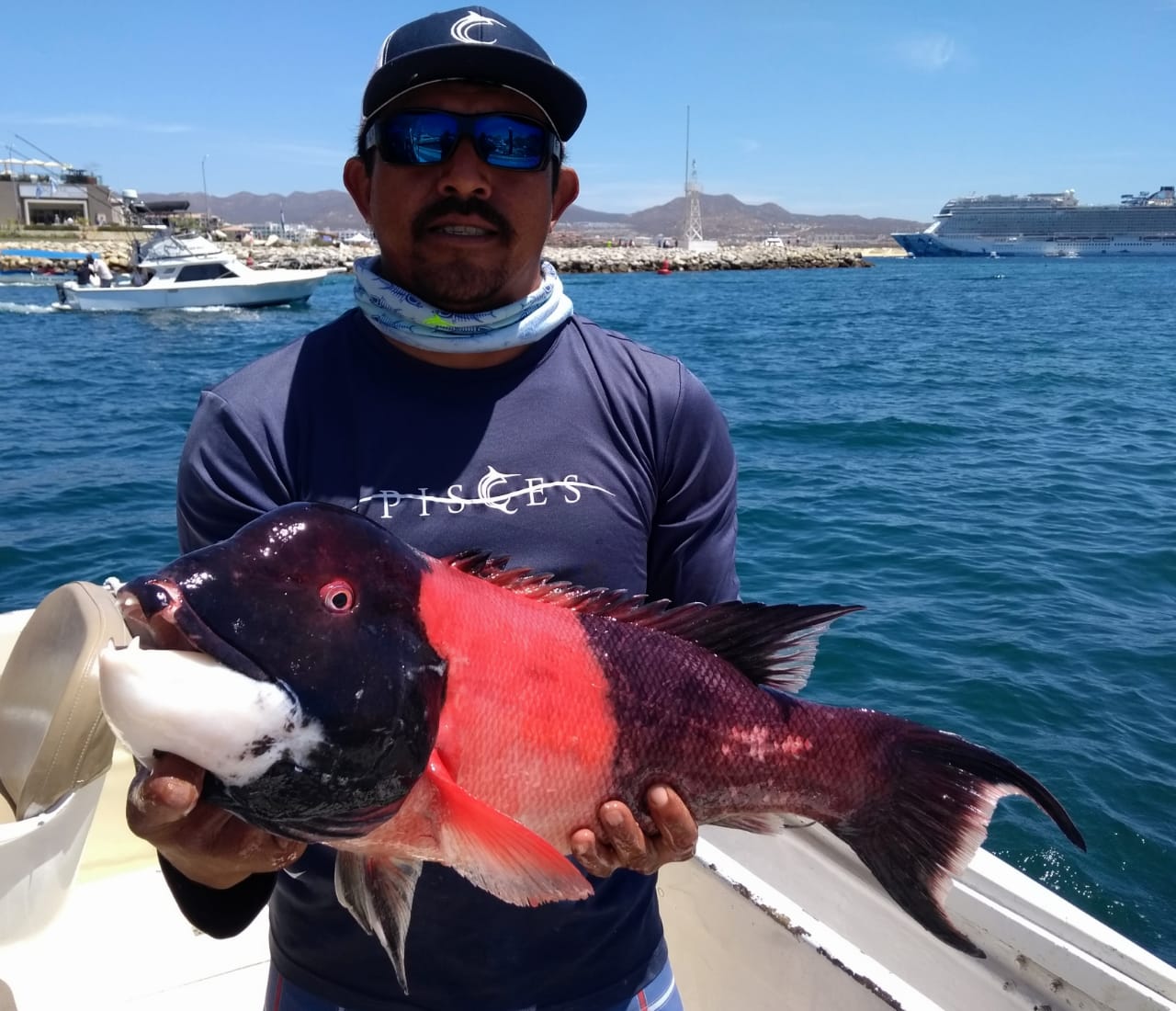 Small game catches this week included 2 sierra mackerel that hit on hoochis at Migrino on the Pisces 31′ La Brisa, as well as 2 Ladyfish and 1 babosa for anglers, the Liner family from Colorado. Not too bad, on a half day of fishing. Pisces 27′ Panga Tres Amigos did well to release 1 roosterfish on caballito bait at San Cristobal, 2 bonita and 3 jack crevalle as well. Rebecca also went for small game this weekend, releasing 1 roosterfish, on hoochies at Migrino and kept 2 out of 3 red snapper.

WEATHER CONDITIONS: Strong winds on most days, seas up to 4 ft.