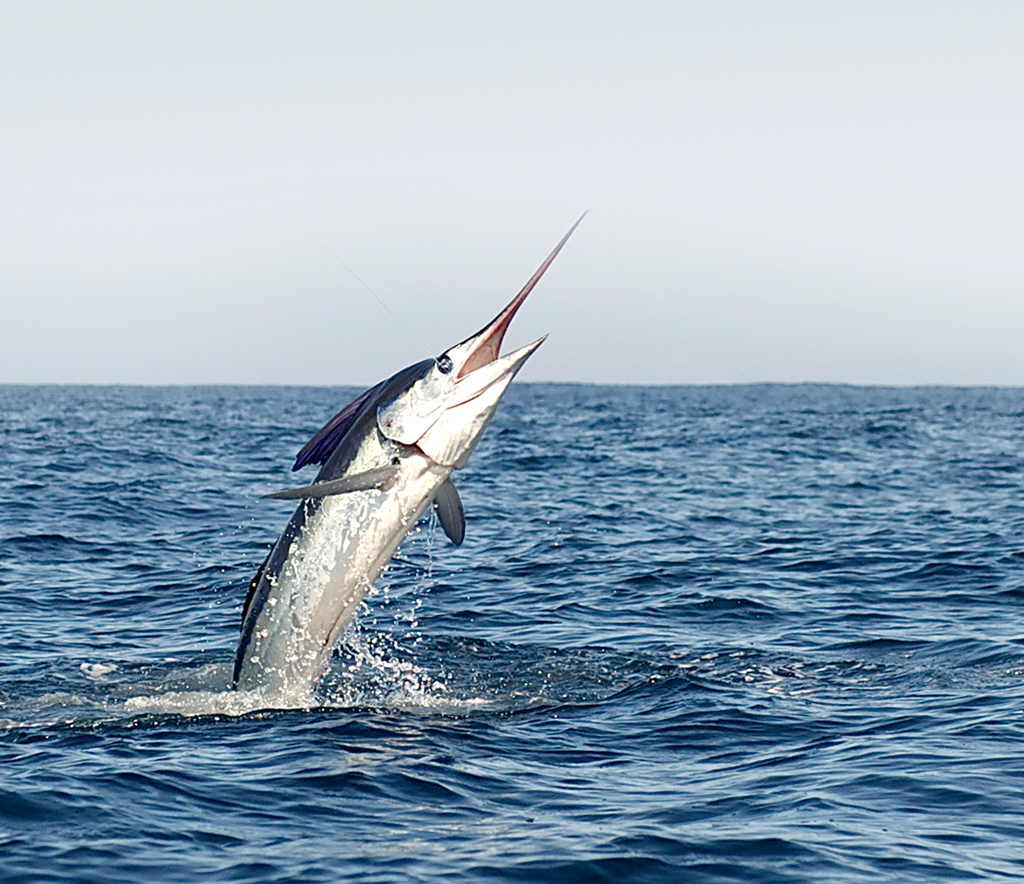 Anglers and crews this week did a great job of making the best of the day, even with some rough weather and inconsistent fishing (which is not rare for this time of year). What did help though was that the tuna numbers still held this week, and we saw a spike in dorado catches compared really, to the rest of the year so far. We had seen only 1 or 2 dorado caught per week total, whereas this week we saw a total of 18 dorado caught by our crews. Inshore fishing is still producing nice fish, with roosterfish still around, along with yellowtail, sierra, bonita, red snapper and others. A few nice wahoo made the catches this week too. Marlin have been “fussy eaters” this week, with crews often seeing them and pitching baits, but not much interest on their part; and difficulty getting them to bite on the troll as well. With this said, our top marlin boat this week released 3 striped marlin in one day.

Pisces 31′ Rebecca was our top marlin boat, with anglers Doug and Jennifer Lavoie releasing their three marlin, which hit on live Caballito bait out of the 170 Spot (about 35 miles out). The marlin weighed approximately 70 lbs each. Pisces 35′ Knot Workin’ found their marlin closer by, only 8 miles out from Cerros de Arena area. The marlin weighed about 150 lbs and was released successfully, hitting on caballito bait. They also landed 14 bonitas, of decent size, about a mile offshore, on hoochis and feather lures, for the Seibel family from Co. 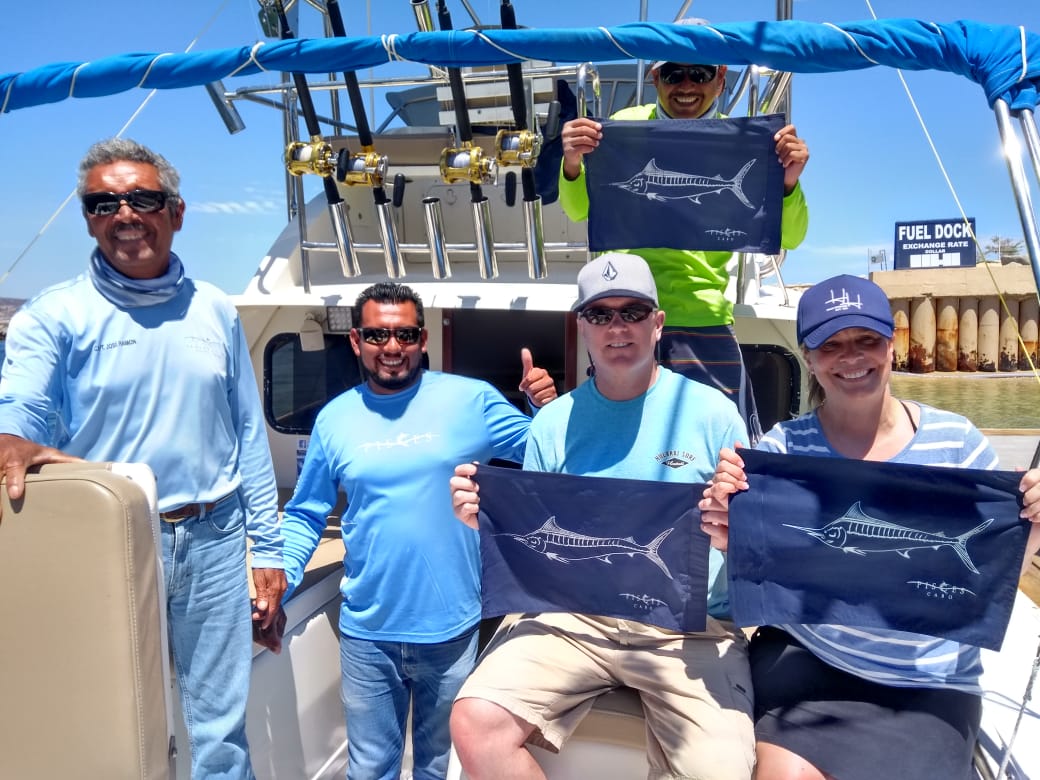 April 25th Pisces 31′ Tracy Ann also tagged and released a nice marlin, of about 120 lbs, which hit on live caballito bait 29 miles south of Cabo. There they also released a small dorado, of about 6 lbs and tagged it as well. And to finish off the day they caught and released a small yellowfin tuna which hit on a cedar plug lure. Congratulations to the anglers from Redding, CA: Alan and David Gilman and Michael And Patrick Lewis, who did a great job on their catch and who we applaud for their enthusiasm to tag and release all fish; giving them an opportunity for growth and reproduction.

Pisces 35′ Valerie was one of our top boats this week, with the highest catch success rate compared to others. Beginning the week they caught and released 1 striped marlin on caballito bait out of San Jaime Bank, which weighed approx. 130 lbs. They also found some tuna, landing 8 total, football size, which hit on cedar plugs, feathers and green/white and blue/white lures. Anglers were Cheryl, Paul and Will Cadieux and Magella and Zach Wells from Canada. beginning the week the Valerie also did well with tuna, April 21st they landed 6 yellowfin tuna of about 15 lbs each on cedar plugs out of San Jaime and also kept 2 dorado of about 10 -12 lbs each which hit on cedar plugs as well. The next day on Valerie brought slightly larger tuna, between 15 and 25 lbs each, hitting on feathers, cedar plugs and white/blue lures, for anglers Michele Haddad and Scott Curtis from San Francisco. 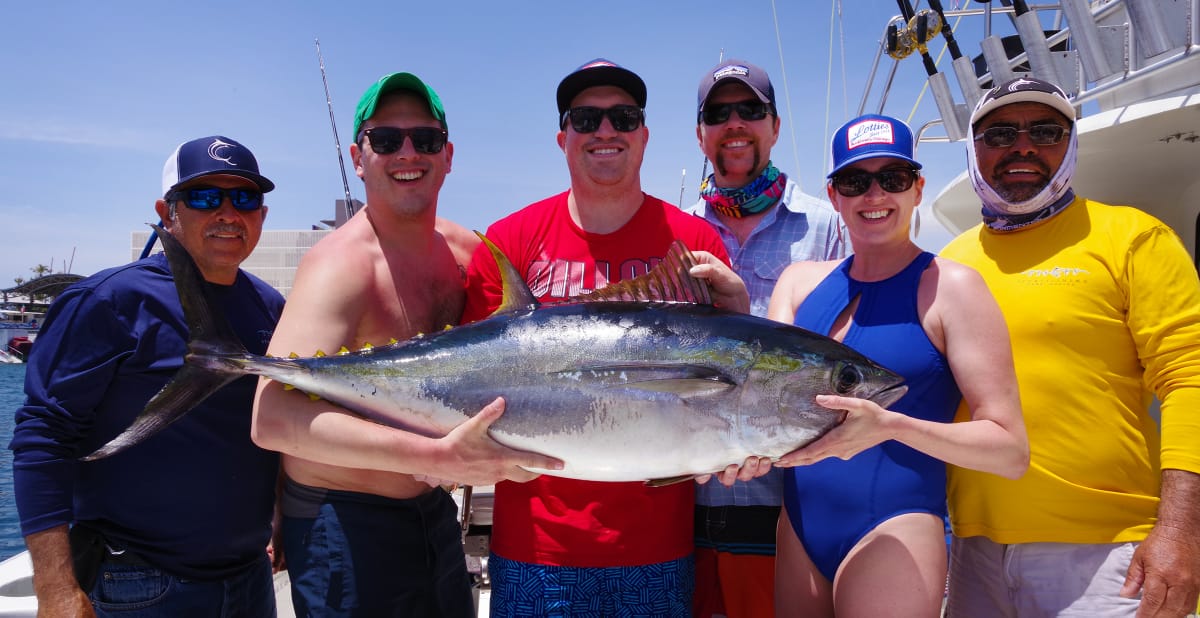 The largest tuna of the week though was caught by Pisces 35′ Valerie on April 24th, when Amy Bandanza, Andrew Morris, JM Jones and Tony Bandanza from Chicago landed a nice 65 lbs yellowfin. They kept another 4 tuna in addition to this. All tuna hit on cedar plugs and hooch is at San Jaime.

Pisces 42′ Yahoo impressed at the end of the week with 22 yellowfin tuna between 10 and 20 lbs each, which hit on cedar plugs, feathers and hoochis, almost 40 miles out of La Herradura. And more tuna and dorado caught on Pisces 32′ Bill Collector, which headed about 15 miles south of the Old Lighthouse at the beginning of the week and landed 12 yellowfin of about 15 lbs each on feathers, cedar plugs and white/blue lures. They also caught an approx. 10 lbs dorado. To close out the week they hit a home run with the dorado, finding a nice school about 23 miles out of the 150 Spot. A total of 9 dorado were caught, but three were released as they were only about 3-5 lbs. The others kept were about 10 lbs each. All fish hit on hoochis, feathers and caballito bait. Big brother Pisces 35′ Bill Collector 2 did well this same day too, heading to La Herradura and finding a nice 100 lbs striped marlin which they released and a great wahoo of about 35 lbs which hit on ballyhoo. Anglers were from Nashville, Tennessee. 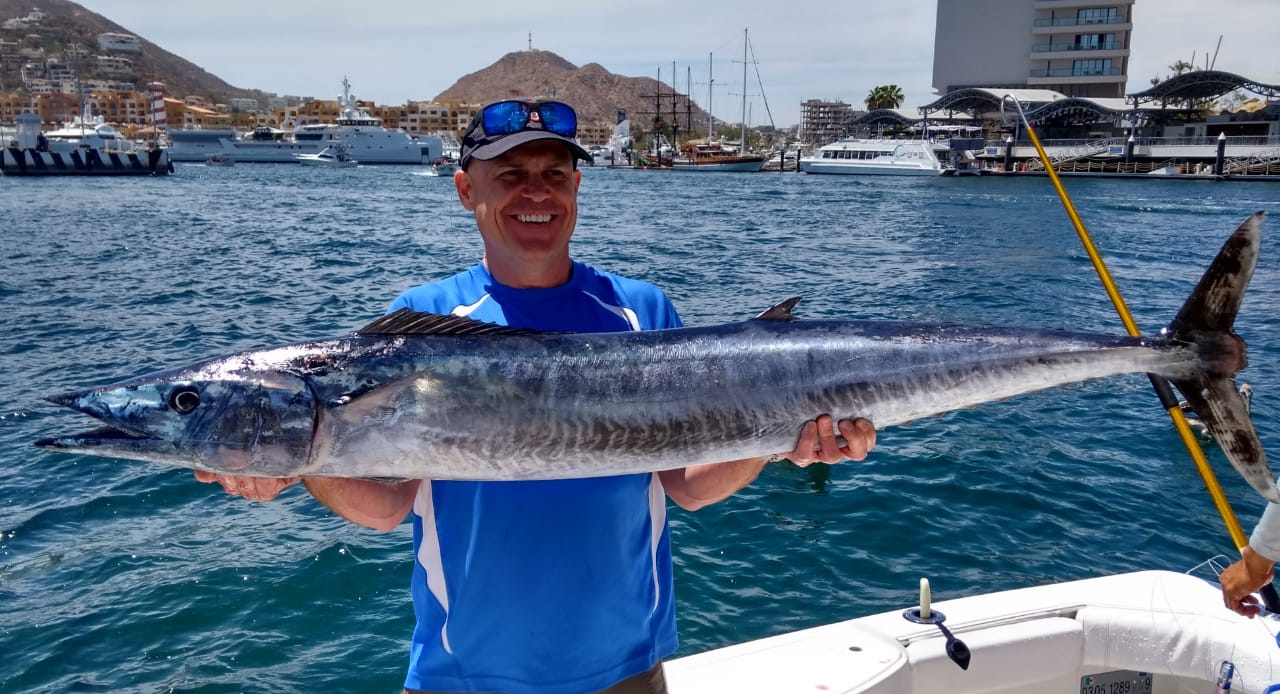 Pisces 31′ Karina also landed a nice wahoo of about 30 lbs which hit on a pink/blue lure out of La Herradura the next day for anglers Jerry Shea and Wayne Pourciau. Earlier in the week the Karina headed closer to shore around Cerro De Arena area for small game and landed 4 sierra mackerel on hoochis, with the largest weighing about 7 lbs.

Pisces 24′ Panga Anamar II also did well at Cerros de Arena in the week, landing 9 Sierra mackerel of up to 8 lbs, hitting on hoochis.  Anglers Tom Pilch and Jim Helmrick also released a Jack Crevalle, which hit on Caballito bait. Anamar I caught 1 sierra of about 7 lbs on hoochis at Solmar as well and released two jack crevalles at Solmar on live bait.  Closer to Cabo, Pisces 27′ Superpanga Tres Amigos caught 5 Sierra on hoochis at the Old Lighthosue for Dan Ceballos and Shawn Olivier from Houston. 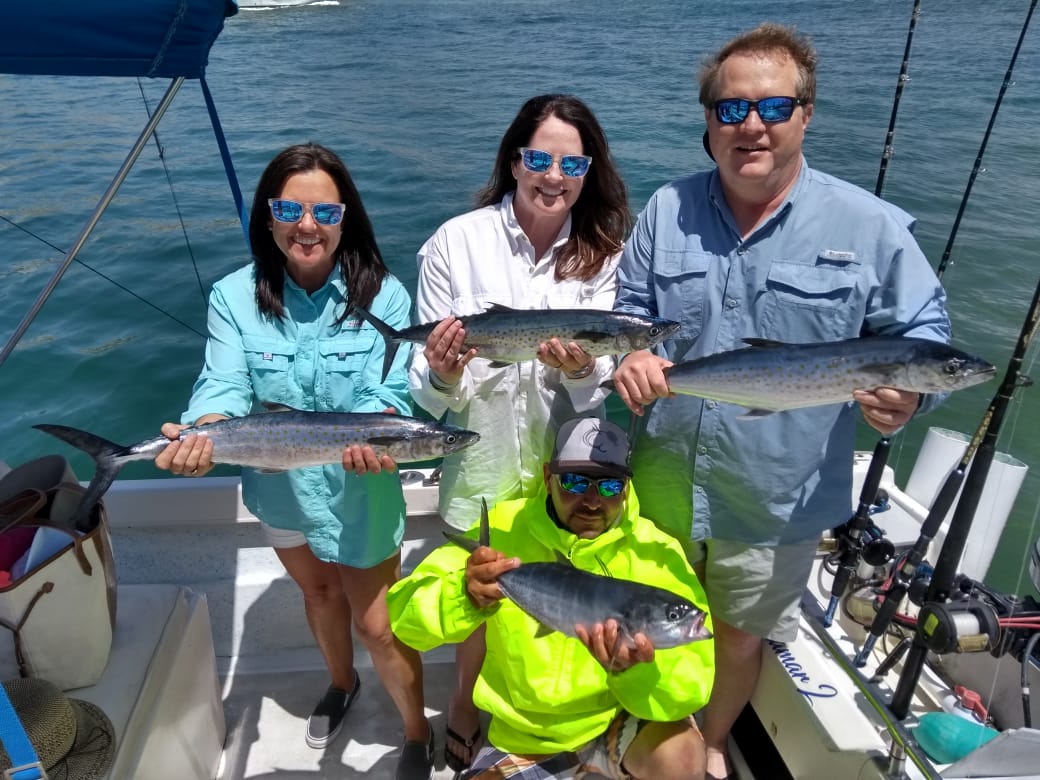 Sierra time on our Pisces Pangas!