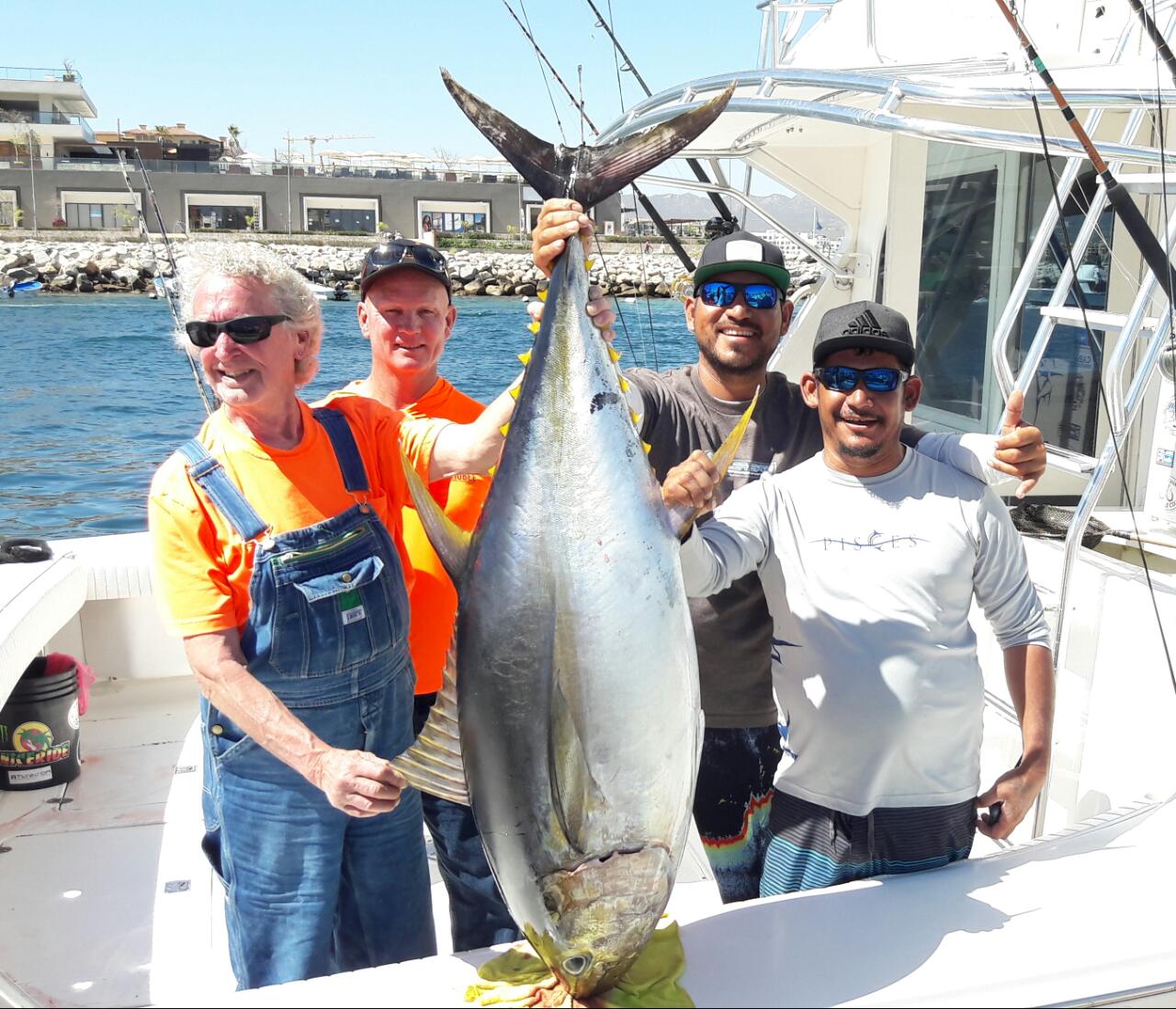 We were very happy this week to see that the weather and the fishing have improved! We are up over thirty percentage points in our overall catch success rate this time around, with 63 out of 66 boats catching fish! Winds have died down for the most part (only a few where they picked up intermittently) and water temperatures South of Cabo have risen a few degrees; with this the marlin have shown up. In total this week, our fleet caught and released 60 Striped Marlin with an average of about 1-3 per boat, and some boats releasing up to 5 marlin each. Tuna numbers did fall slightly, but mostly because anglers chose to target marlin over them; but those who did go for the yellowfin found them in good numbers and sometimes found luck with a marlin release too. The largest tuna this week was caught on Pisces 38′ C Rod, weighing approx. 100 lbs with owners aboard. Other catches have included a few dorado, jack crevalle, roosterfish, ladyfish, skipjack, bonita and even one or two makos.

We started off the week with Pisces 31′ Karina landing, again, the wahoo of the week. At about 25lbs, it hit on caballito bait out side the 95 Spot. Anglers were Brenda and Chris Reichert. A few days later, and the marlin showed up, with Karina again, being of the first to get into them. Three Striped Marlin total caught and released around the 150 spot, almost 30 miles out. The marlin ranged in size of about 100, 110 and 140 lbs each.  Anglers were Doug Applegate, Edward Maney and John Weil from Yuma, Arizona. 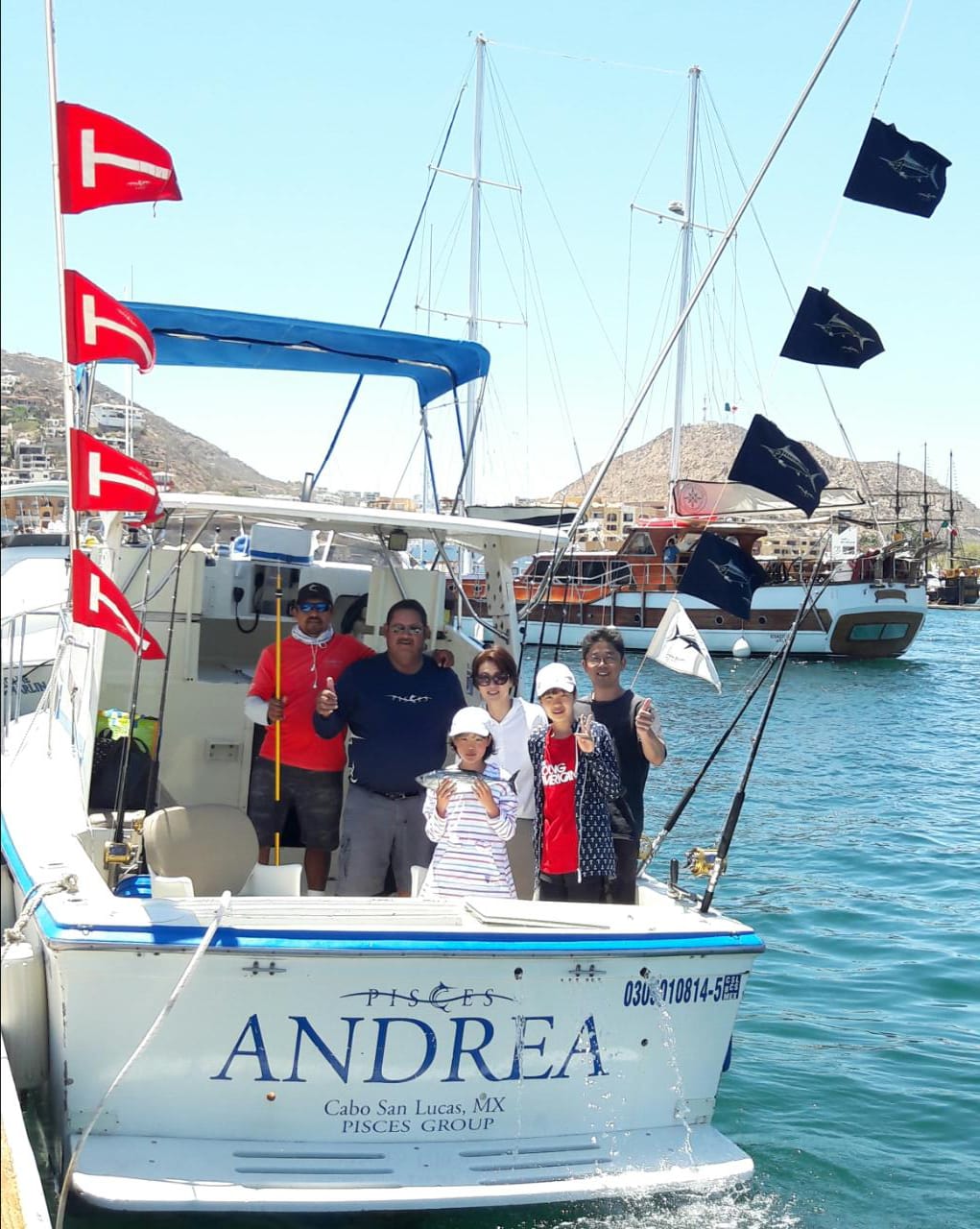 The Nakumura family showing off their 4 striped marlin released flags

The next day, Pisces 31′ Ruthless caught and released 4 striped marlin of up to 120 lbs, hitting on caballito bait out of the 11:50 Spot for angler Kirk Duncan from Wisconsin.

Pisces 31′ Rebecca also found luck with the marlin of course, releasing 5 stripeys total, of up to 150 lbs each, also at the 11:50 and on caballito bait. And the Nakamura family of anglers did a great job on Pisces 28′ Andrea by releasing 4 striped marlin between 100 and 140 lbs at the 11:50 Spot too. They also caught one skipjack on a ceda plug lure. Similarly, the Pisces 35′ Bill Collector II  caught and released 3 striped marlin and football sized yellowfin between the 95 and 11:50 Spot. Pisces 31′ Tiburon also landed 3 striped marlin close by to the 11:50 Spot, although slightly smaller, from about 70 to 100 lbs each. Plus one small tuna for them too, hitting on cedar plug lure.

Pisces 35′ Valerie upped the ant? on the tuna this day, catching 5 small yellowfin on cedar plugs out of the 95 along with 3 striped marlin caught on live bait, as well. Anglers were the Brown’s from Arlington, TX. The previous day the Valerie caught and released 2 striped marlin, one hitting on slow trolled dead bait and the other on live bait, when spotted. The fish weighed between 130 and 150 lbs each at the 11:50 Spot by anglers Andrey Mineev, Artur Abdulin, Nazmiev Iskander, Timur Malikov and Vladimir Chubenko.

And and awesome day for Pisces 42′ Yahoo who caught and released 3 striped marlin out of the 11:50 Spot along with 4 yellowfin tuna of up to 25 lbs each on cedar plug lures.

The tuna picked up throughout the week, with boats like Pisces 28′ Andrea landing 22 yellowfin of about 15-20 lbs on cedar plugs and feathers out of the 120 Spot, while Pisces 28′ Adriana landed 15 yellowfin of up to 20 lbs each at La Herradura. The next day, Pisces 42′ Hot Rod caught 25 yellowfin for anglers from CA, out at the 120 Spot and 1 striped marlin released just outside of there. 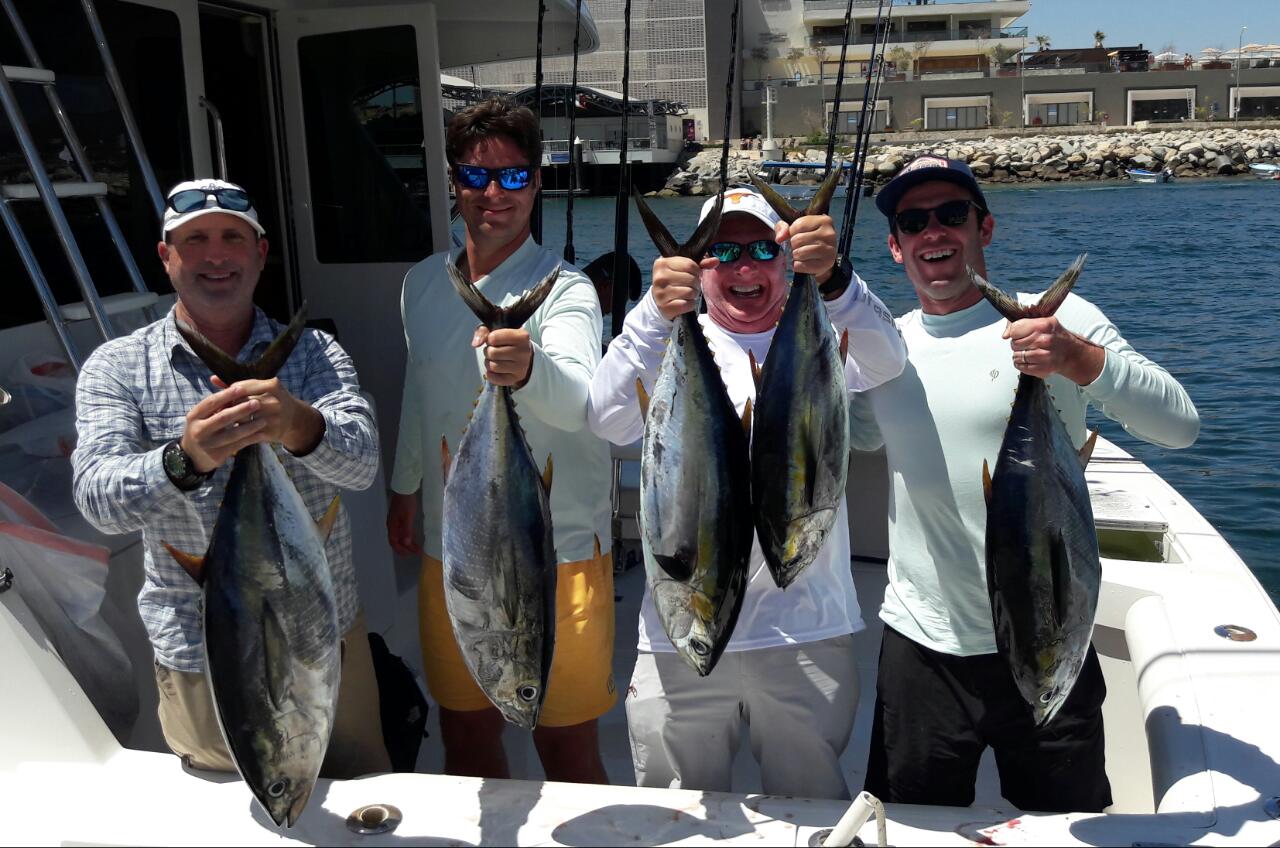 Anglers aboard the Pisces 42′ Hot Rod showing off some of their 25 tunas caught this day!

Biggest tuna this week though was for Pisces 38′ C Rod, which weighed approximately 100 lbs, caught on the kite about 40 miles out at the 140 Spot by the owner onboard.

For inshore fishing, we had success on Pisces 52′ Free 2 Play , who caught and released a nice roosterfish of about 30 lbs at Destiladeras on the East Cape, which hit on caballito bait. They also caught 3 bonita on yo-yos there and 4 red snapper on a nice half day. Pisces 24′ Panga Anamar II also did well with 2 Jack Crevalle of about 10 lbs released, hitting on live caballito bait at Finisterra from Grant Myers and Michelle Sehulster from Louisiana.

Pisces 25′ Panga Poseidon also caught 2 bonitas on yo-yos at Cabeza Ballena, along with a Skipjack and 1 Mako Shark.

WEATHER CONDITIONS: Mostly sunny, intermittent winds on some days of up to 20 knots. Other days much calmer, with seas of 1-2 ft.