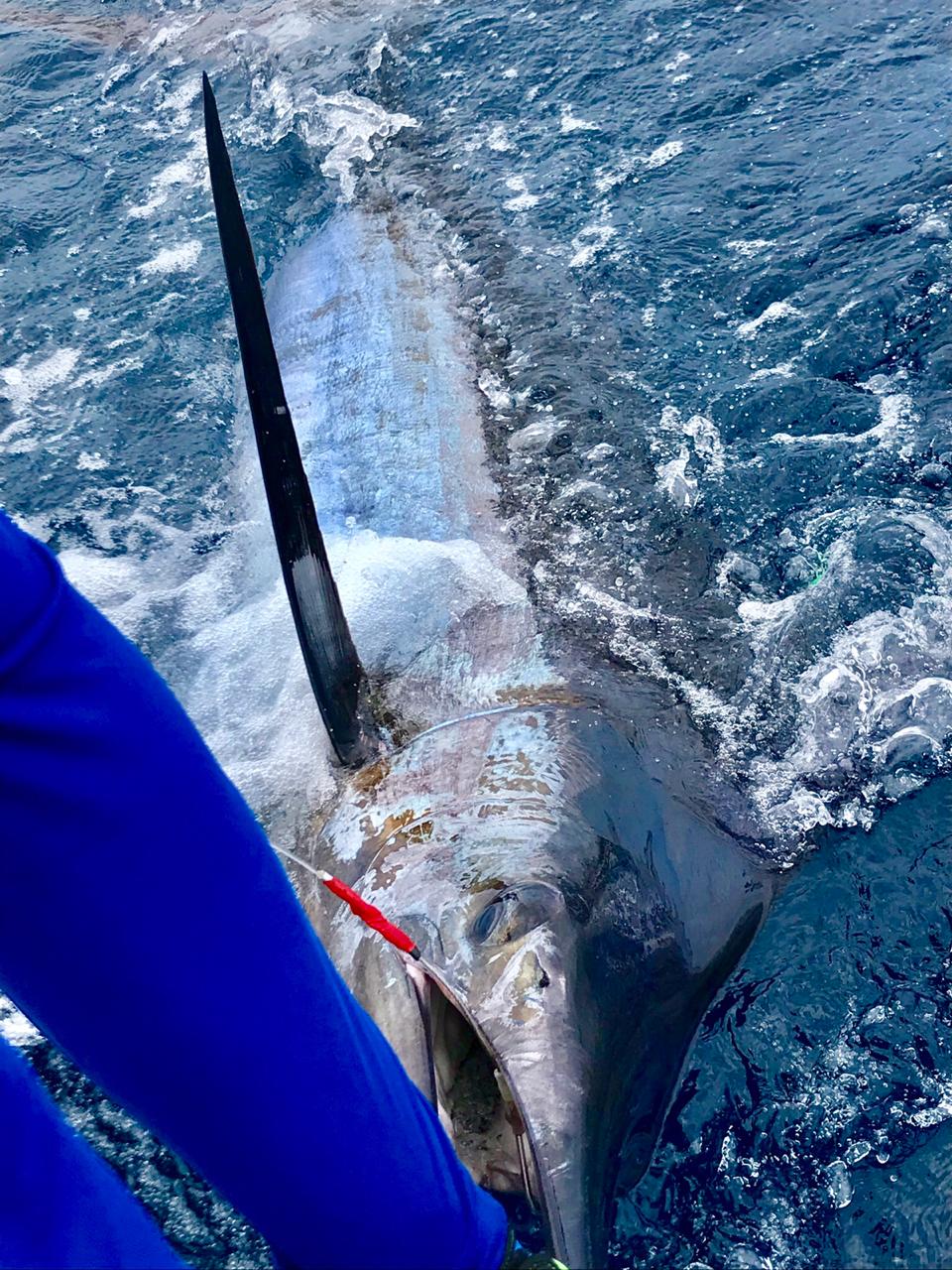 A pretty spectacular week with not one or two, but THREE Billfish Grand Slams by Pisces boats the 42′ Caliente and 30′ Karina in less than 24 hours (one of which was just short of being a Super Grand Slamas they lost a Black Marlin). Most boats caught and average of 3 to 5 billfish each, with a total of 74 Billfish for the fleet and only 3 boated and the rest successfully tagged and released. Dorado numbers were good as well, 39 dorado caught total, mostly ranging in size from 10 – 30 lbs each. Again, we saw decent tuna numbers for those that went the 20- 35 miles to find them, with Pisces 31′ Tracy Ann landing a 146 pounder! Currently, the port is closed due to a tropical storm nearby, which has only brought rain. Still, Port Captain is extending precautions, and we should be back out fishing Sunday. Previous days were slightly overcast, with small swells only, some humidity, and no wind. Fishing has been focused mostly on the Sea of Cortez Side from Punta Gorda to Destiladeras for outstanding Billfish catches and out at at the San Jaime Banks for tuna; Dorado has been spread out, and there has been some good wahoo numbers as well, mostly fish between 25 and 35 lbs each. There has been some inshore fishing as well for triggerfish and red snapper mostly. We also saw a barracuda catch this week, which is rarely seen. 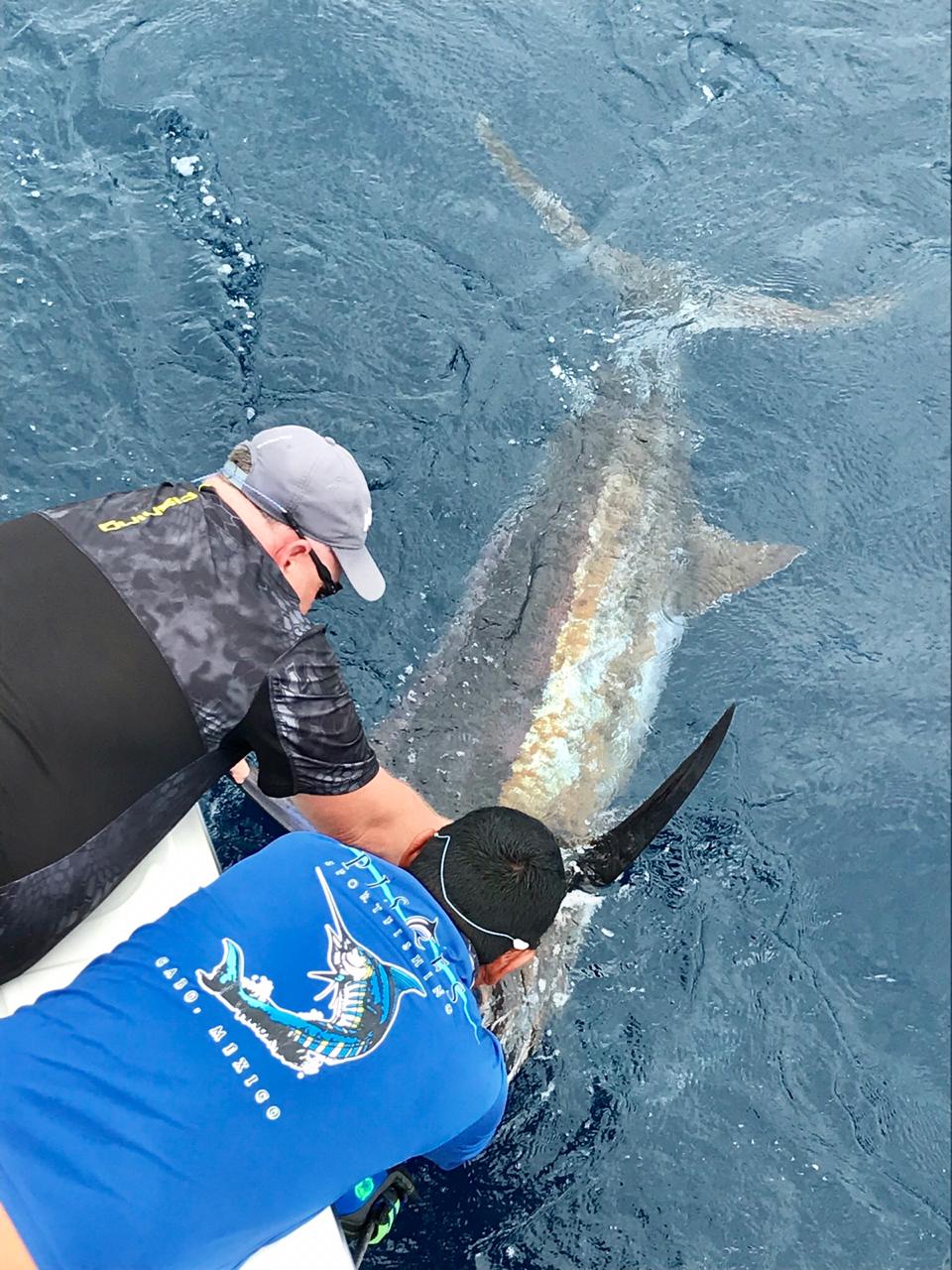 Starting off with our amazing Grand Slams this week, we had Pisces 42′ Caliente that had the two consecutive Grand Slams. The first day, August 15th, Pisces Caliente went 1 for 2 on Sails, 2 for 3 on Striped Marlin, 1 for 3 on Blue Marlin and 0 for 1 on Black Marlin (Would have been a SUPER Grand Slam!) The Striped Marlin hit on Ballyhoo bait, the Blue took a blue/white lure and the Sailfish also took ballyhoo; all at Punta Gorda area. Anglers were David Miller, James T. Gummersbach, and Joseph W. Huk from Forth Worth, TX. They also released one shark that ate a ballyhoo in the spread… and then the guys did it all over again the next day! Amazingly, these same anglers managed to land a Grand Slam again – something we’ve never experienced before. Going 1 for 1 on Blue Marlin, 1 for 1 on Sailfish and 3 for 3 on Stripeys. A huge congratulations to these anglers and the awesome crew of the Caliente. 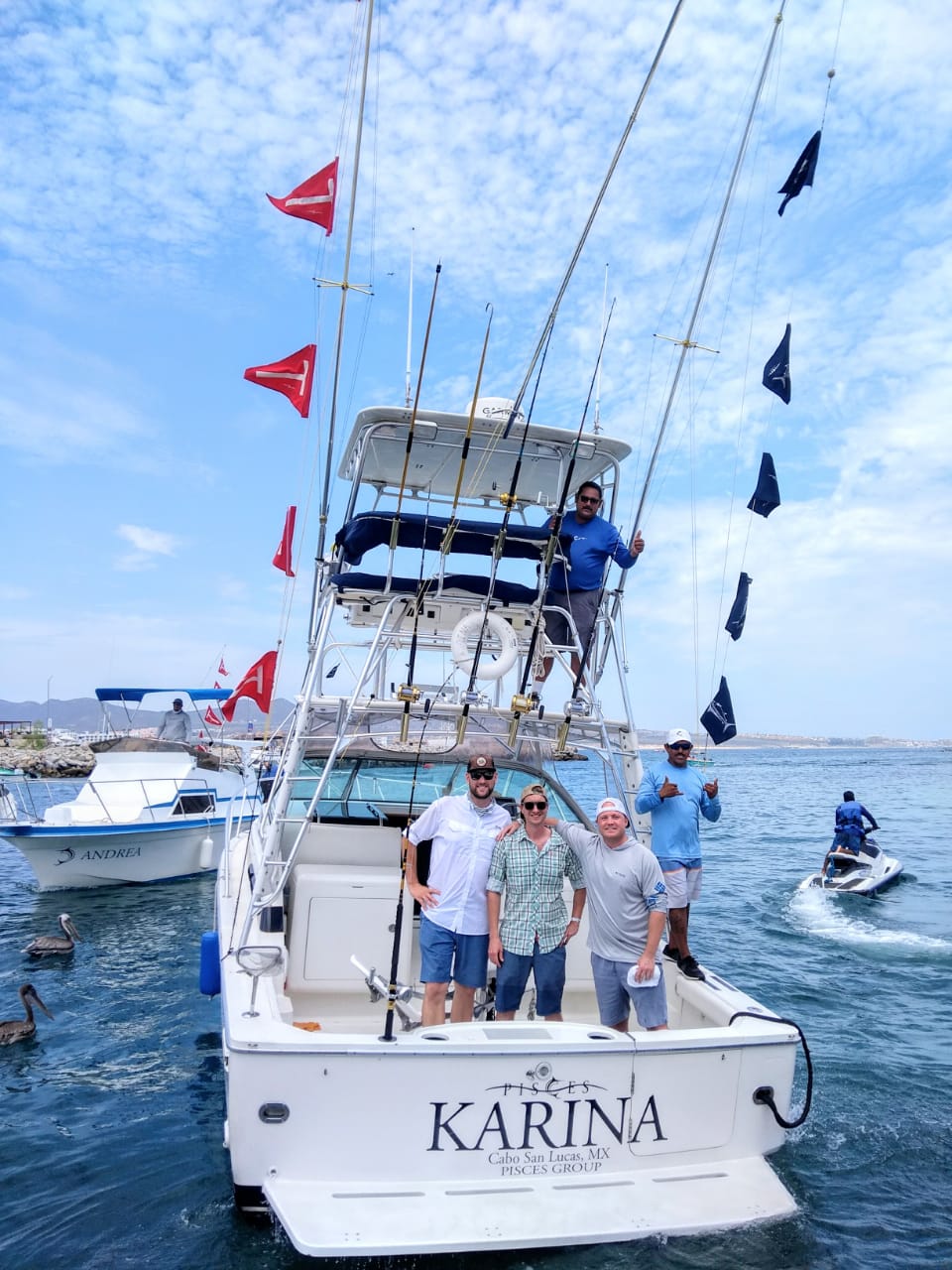 To top it off, This same, August 15th, Pisces 30′ Karina released a Grand Slam as well. They went 2 for 3 on Blues, 2 for 4 on Striped and 1 for 1 on Sailfish. Captain Orlando said they spotted 5 more Billfish on the surface that didn’t take a bite. Their striped marlin and sailfish took live caballito bait and the blues took a cedar plug lure and dead caballito, also at Punta Gorda. Anglers were Brock Skarsgard, Brent Baker and Ethan Maclean from Overland Park, Arkansas. 30′ Karina kept up their marlin streak, and released 3 striped marlin in one day towards the end of the week, with fish weighing approx 60, 80 and 100 lbs each. They landed them on live and dead caballito out of Destiladeras. They also released 3 shark.

Pisces 28′ Andrea released 4 Striped midweek and Pisces 28′ Adriana released 1 Blue. The Andrea’s striped marlin hit also at Punta Gorda, with two of them taking dead bait, and one taking a pitched live bait. The other hit an orange lure for anglers Carl and Danielle Wilson from Washington. 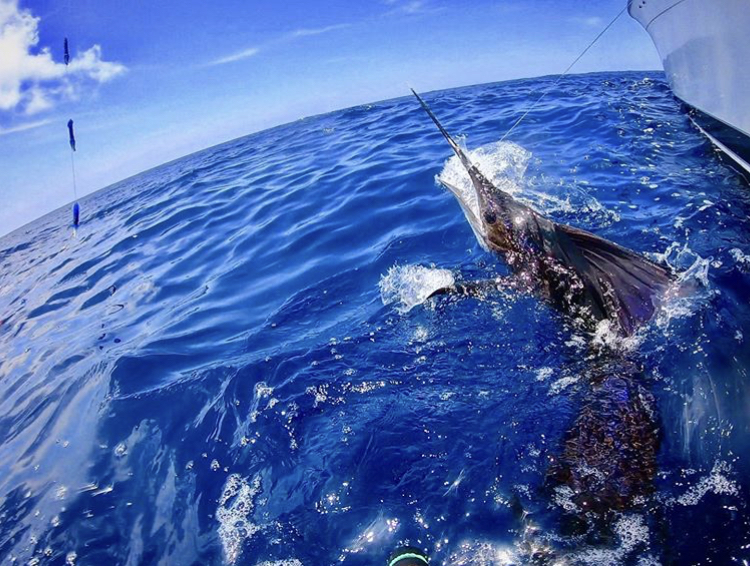 Pisces 31′ Ruthless released 3 Blues and 2 Striped as well. The Striped marlin were about 100 and 120 lbs each, and hit on live caballito bait out at Punta Gorda. Two of the Blue Marlin hit on dead bait, and one hit on a petrolero lure. Fish were about 230 and 250 lbs each, released successfully by the Moorer family from Sugarland, TX. 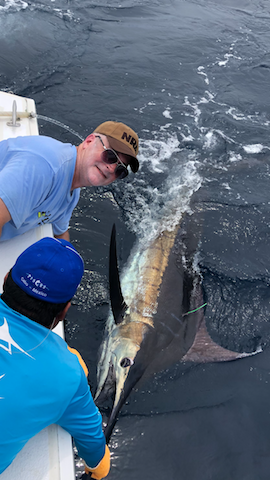 Pisces 31′ Ruthless was one of our most consistent boats this week; also catching some variety of fish. For example, anglers Bennet and Mathew Adamson abaord, released 1 Striped Marlin of about 130 lbs, which hit on caballito bait out at the 11:50 Spot; then they headed towards shore and released a beautiful blue marlin of about 300 lbs, which hit on a lime green lure. Once closer to shore, they headed outside of Chileno and landed grouper and triggerfish for dinner. 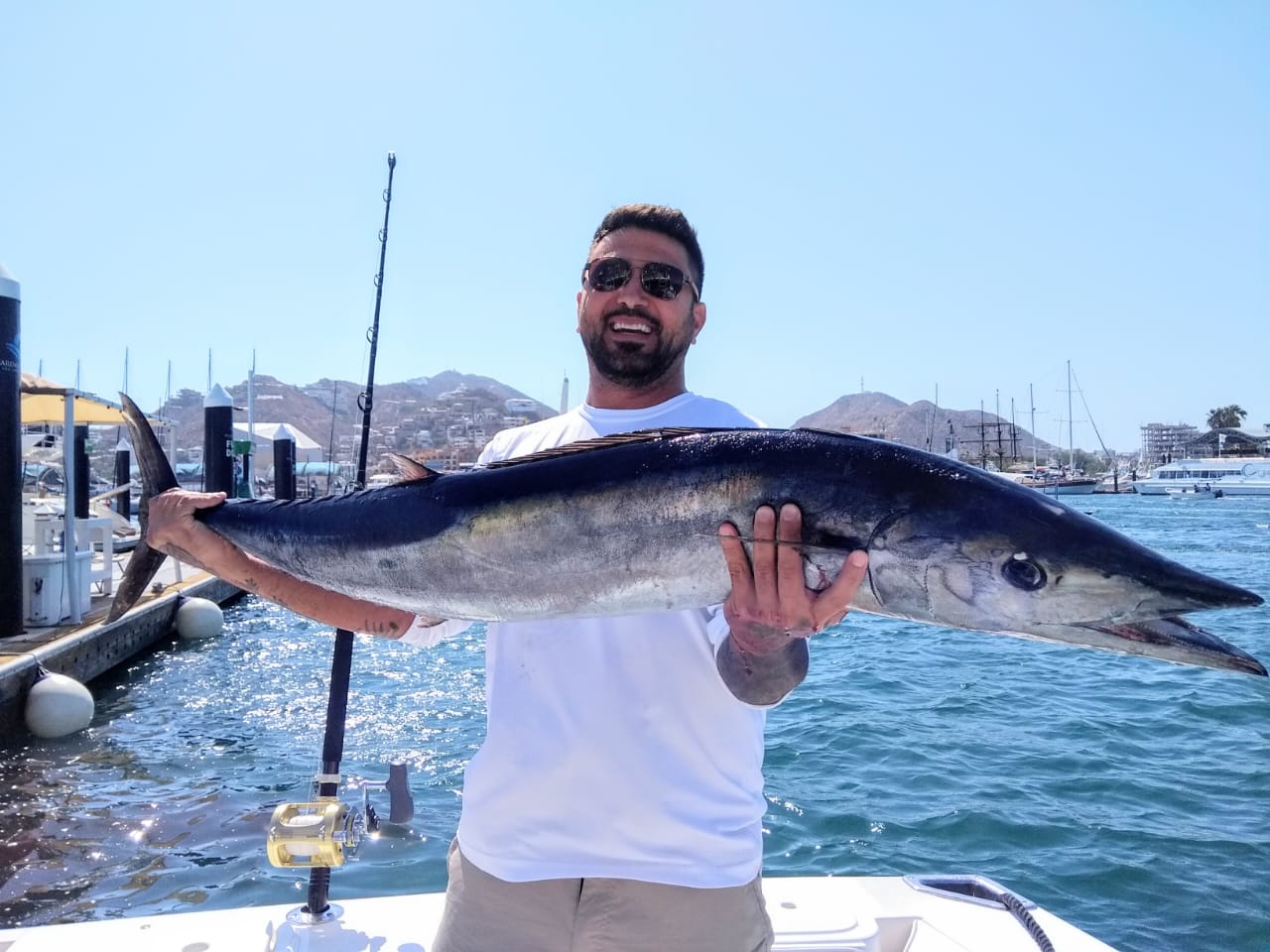 Pisces 35′ Bill Collector 2 was the king of variety though; they landed two very nice yellowfin of about 35-45 lbs each at the Iman bank on squid; 6 bonita on the yoyo and squid, 1 red snapper, 8 triggerfishh and a nice dorado of about 15 lbs along with an approx 30 lbs wahoo! Anglers were Joshua Guild and friends from Nevada.

August 16th Joshua and friends went out again on the Pisces 35′ Bill Collector 2 released and had another spectacular day. They released 4 Striped Marlin, all between 90 – 120 lbs, hitting on a pink lure, and ballyhoo bait. They also released an approx 250 lbs Blue marlin on dead caballito and kept a 10 lbs dorado and a bonita on the yoyo. All fish were caught at Gordo Bank. 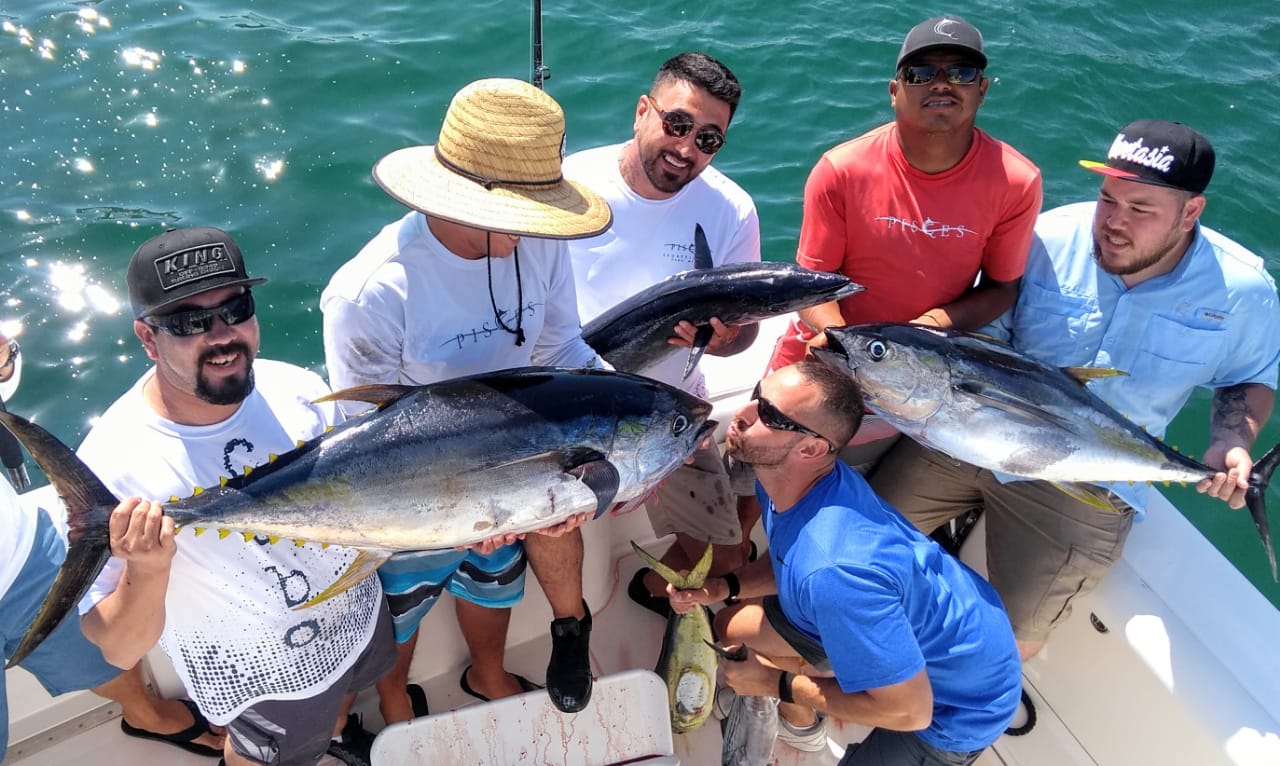 Joshua Guild and friends from Nevada with their fantastic catch on

Earlier in the week the Pisces 35′ Bill Collector 2 released 5 Striped Marlin between 80 and 140 lbs each. Two of the fish hit on petrolero lures, while the others hit on ballyhoo at Punta Gorda.

For more dorado we saw Pisces 38′ C Rod land a nice 15 pounder on a purple lure around the 95 Spot and anglers also released two sailfish of about 60 lbs which chit on live caballito. 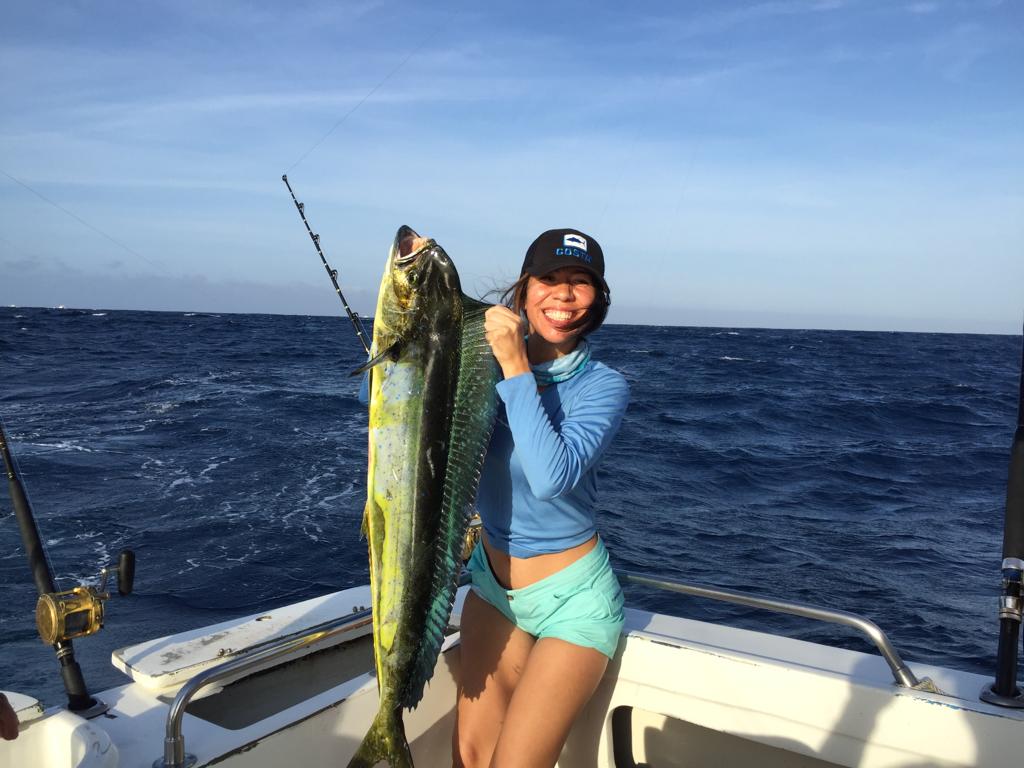 Pisces 28′ Andrea was one of the top Dorado boats, they caught 5 total, of about 10 lab each, hitting on cedar plugs and feathers out at Destiladeras. They also chummed for triggerfish and kept 8 total, and landed an approx 25 lbs wahoo on a pink feather lure for anglers from Georgia. 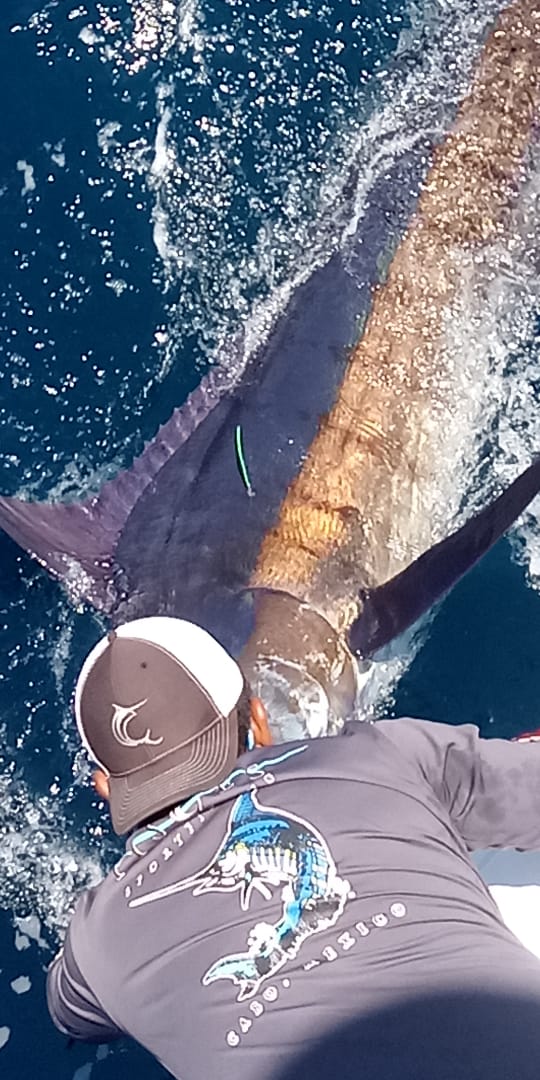 Tuna fishing highlights include Pisces 32′ Bill Collector, which landed 8 yellowfin of about 15 to 20 lbs, hitting on cedar plugs and feathers at the 240 Spot. They also released a striped marlin of about 80 lbs on caballito bait, along with a beautiful 300 lbs Blue marlin which hit on a green/yellow lure.

The biggest tuna caught this week was on Pisces 31′ Tracy Ann (which also had a spectacular week of billfish catches, too many to mention here!). Anglers Ian Peckel, Matt Foster, Scott and Mark Patterson went in search of tuna at San Jaime, about 37 miles offshore. There they used their kite and set out some tigrillo lures and remarkably the kite produced a 15 pounder and the tigrillo a 146 lbs yellowfin. With these two fish they had enough to call it a day and headed on back to port! 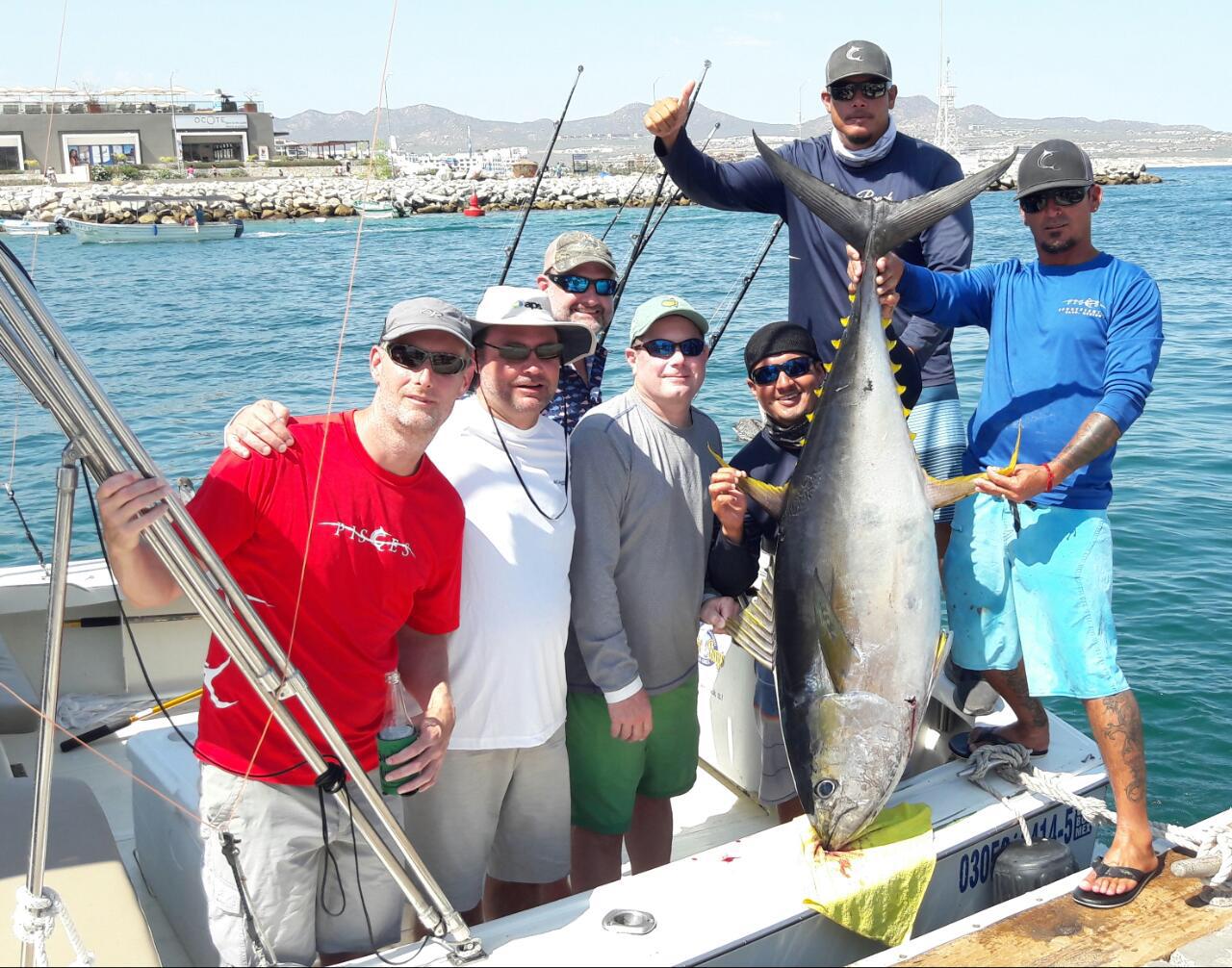 WEATHER CONDITIONS: Slightly overcast, small swells only, some humidity – Port closed August 22, 23, 24 due to nearby storm which brought rain. 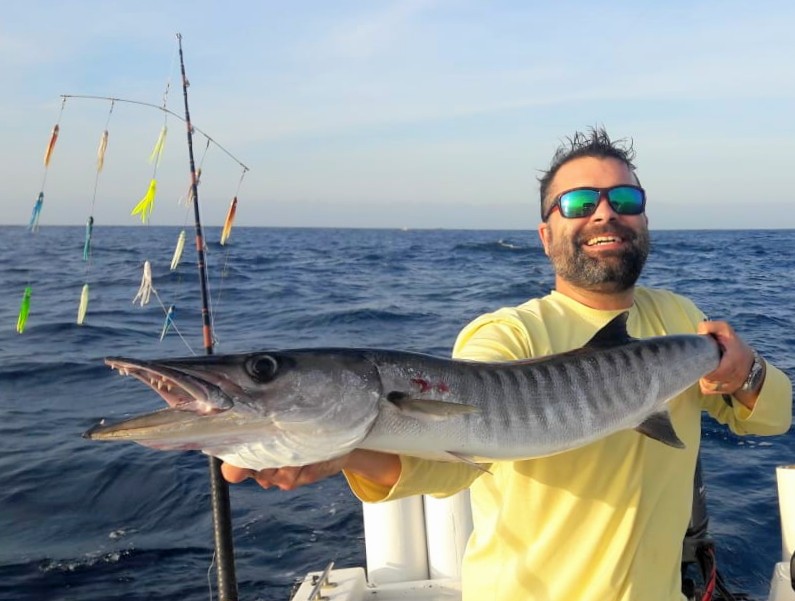