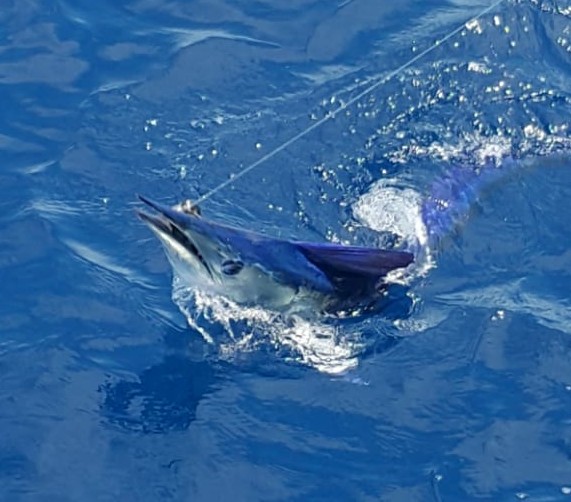 This week has been similar to the last, in the sense that there has been really great days of fishing, then some slowing the next, then BAM! a really fantastic catch shows up. For example, we had a rarely seen short billed spearfish caught this week, along with some big black marlin in the Cabo area in general. A few big bull mahi-mahis caught as well and a beautiful big sailfish, whose size is rarely encountered anywhere else in the world.

Kicking off the week we had Pisces Andrea catch the above mentioned spearfish, which weighed about 50 to 60 lbs. Anglers Debbie, Hanna and Mark Pietz also caught 2 small yellowfin tuna at the 11:50 Spot. The spearfish hit on caballito bait, while the tuna hit on cedar plugs. 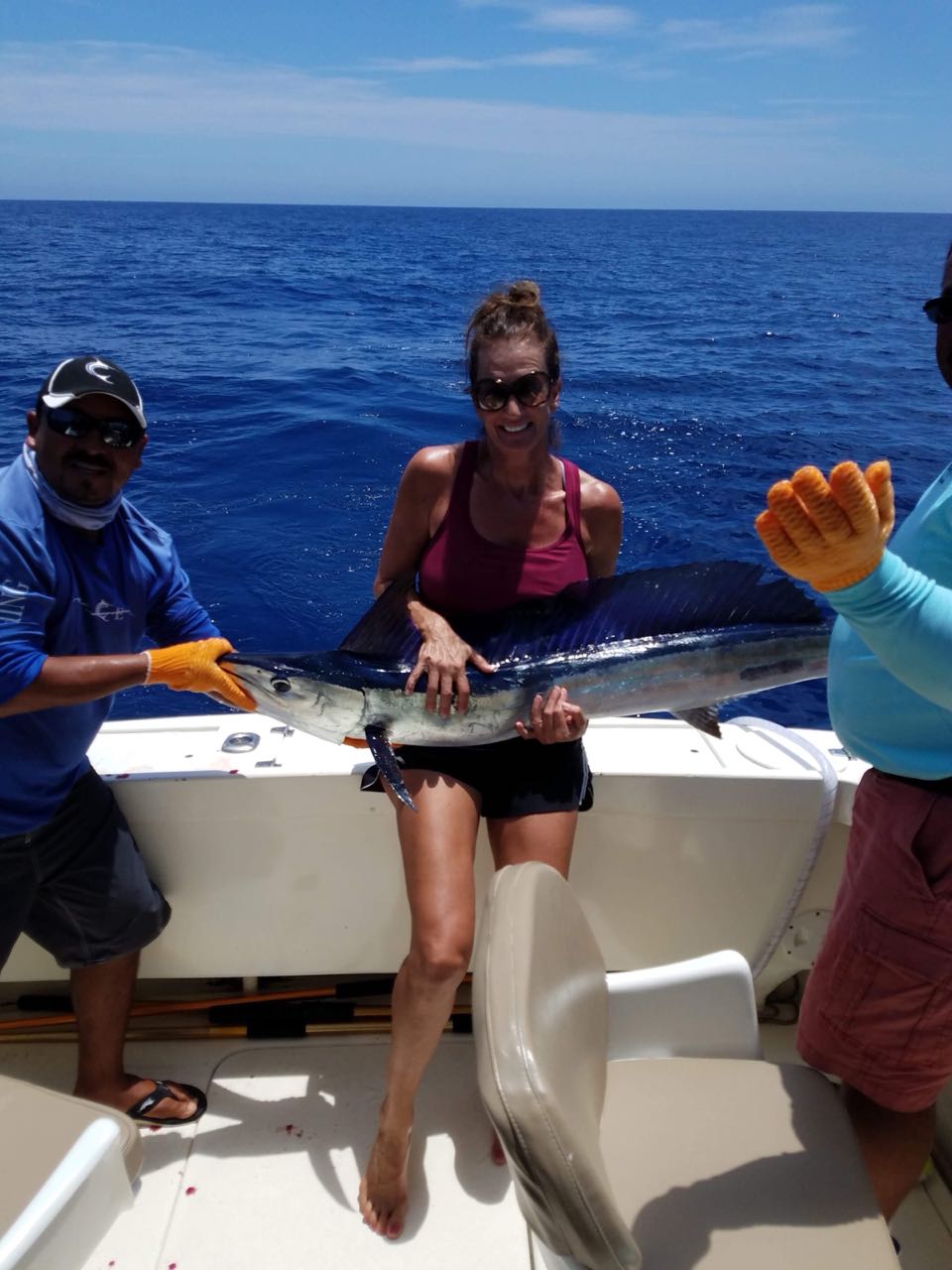 The big sailfish this week was caught by Pisces Adriana, weighing approximately 160 lbs! It was released out at las Margaritas by angler Herman Hogue, who was accompanied by  Kim Hogue and Holly and Ken Griggs. They also landed 4 red snapper between 5 and 10 lbs each by chumming out form the Old Lighthouse, as well as two skipjacks and two triggerfish which hit on feathers. 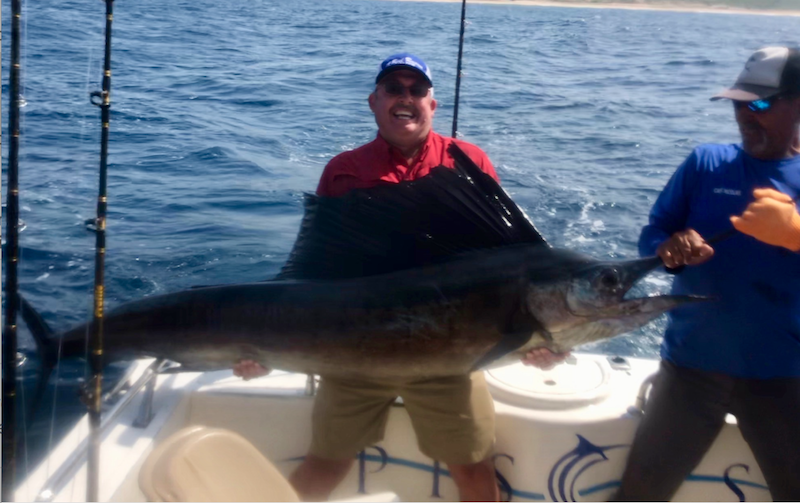 The definite stand-out boat this week was Pisces 32′ Bill Collector, as they topped all other boats by a long shot on marlin catches. They had a total of 11 striped marlin caught and released in just two days by the same anglers! This of course, as a result of making the extra effort and taking on the extra costs associated with heading farther up North, to the Finger Banks. On August 21st, anglers Gene and Darlene Lavengco from Louisiana caught and released 6 striped marlin ranging from 70 all the way to 180 lbs each. The fish hit mostly on caballito bait and tiger striped or green lures. They also landed an impressive 45 lbs dorado. Two days later the couple were at it again, this time landing 5 striped marlin between 100 and 150 lbs, all on caballito and mackerel bait, and of course released. Again, another mahi for dinner, this time a bit smaller, of about 20 lbs. The mahi hit on a pink lure, again all fish caught at the Finger Banks. 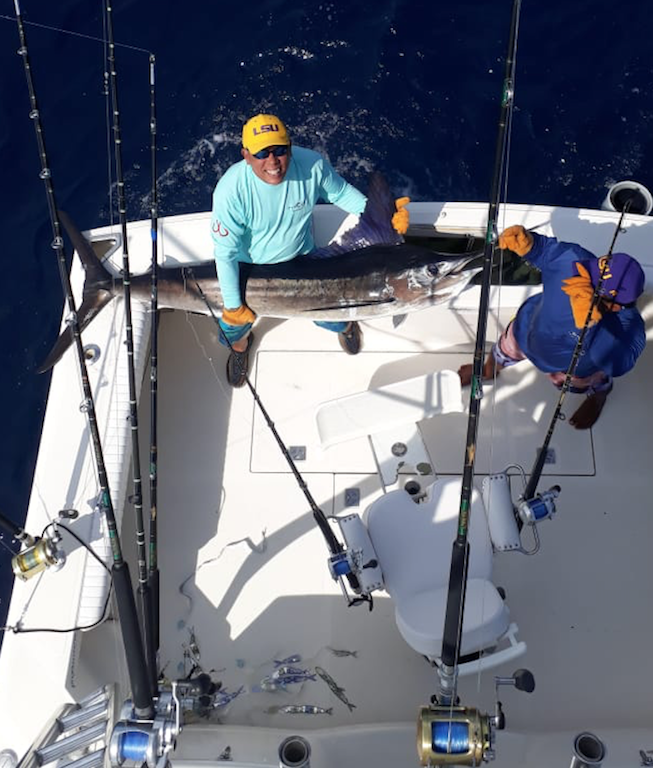 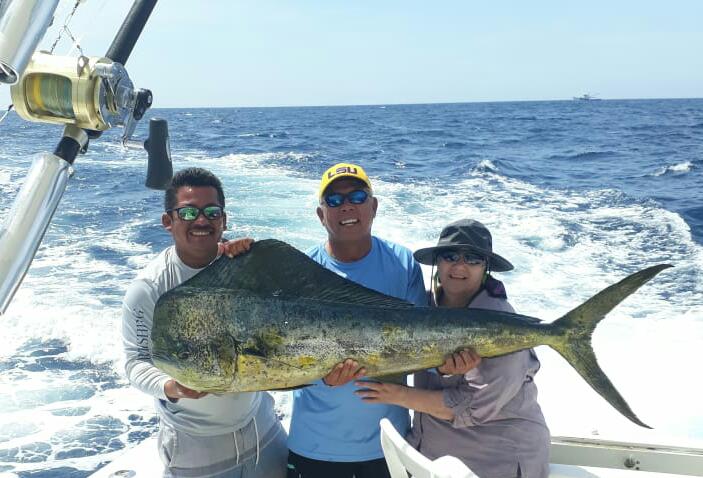 Anglers Gene and Darlene Lavengco with their Bull Mahi to top off the day, after releasing 6 striped marlin too, on Pisces Bill Collector.

And speaking of BIG mahi-mahi, Pisces 31′ Rebecca had the largest of the week. They caught three dorado, with the largest weighed at 57 lbs! The other two were only slightly smaller, between 45 and 55 lbs each. These hit on caballito bait out at Punta Lobos and fought by anglers Emilia and Tom Shankle. They also caught and released a striped marlin of about 130 lbs which hit on caballito bait. The previous day, the Rebecca again turned heads by bringing in the only wahoo of the week; two nice 25 pounders. The fish hit on a tiger striped lure and lime green lure. And to top it off, Pisces Rebecca also landed one of the larger tuna caught this week, with one yellowfin of about 40 lbs caught on August 22nd. 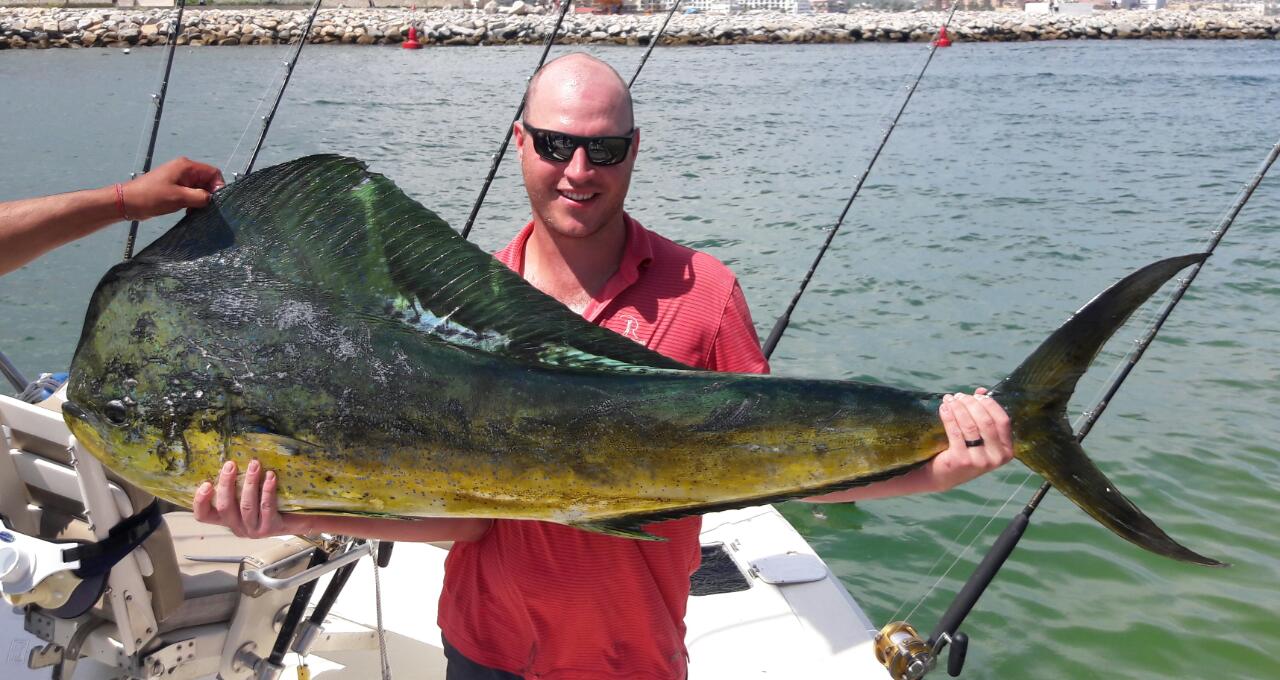 Pisces 35′ Valerie also did well with tuna this week, landing three yellowfin of about 35-40 lbs each as well. These hit on cedar plugs and green/yellow lures about 30 miles out from the Old Lighthouse. Anglers from Redwood, CA, also had a good day aboard Valerie, with one of the most diverse catches this week. They landed 1 striped marlin, 1 dorado, 3 Sierra mackerel, 1 roosterfish and 1 amberjack! The marlin hit on caballito close to Golden Gate, while the dorado, of about 10 lbs, took a feather lure out of Gaspare?o and the sierra, rooster and amberjack all hit at Pozo Cota.

Anglers showing off their yellowfin tuna caught aboard Valerie, with deckhand Salvador and Captain Roberto Sandez.

A few boats had some blue marlin this week, ranging form 200 – 300 lbs each, with larger black marlin between 400 and 500 lbs being caught in Cabo and San Jose area as well. Pisces La Brisa was one of the boats to land a nice blue, about 200 lbs out of Migrino on caballito bait, which was released. Anglers also caught 1 dorado of about 10 lbs on a blue/white lure.

And even Pisces Panga Poseidon got lucky and landed a nice 300 lbs blue marlin on a black and purple lure, just 6 miles out from Santa Maria bay, which anglers released. 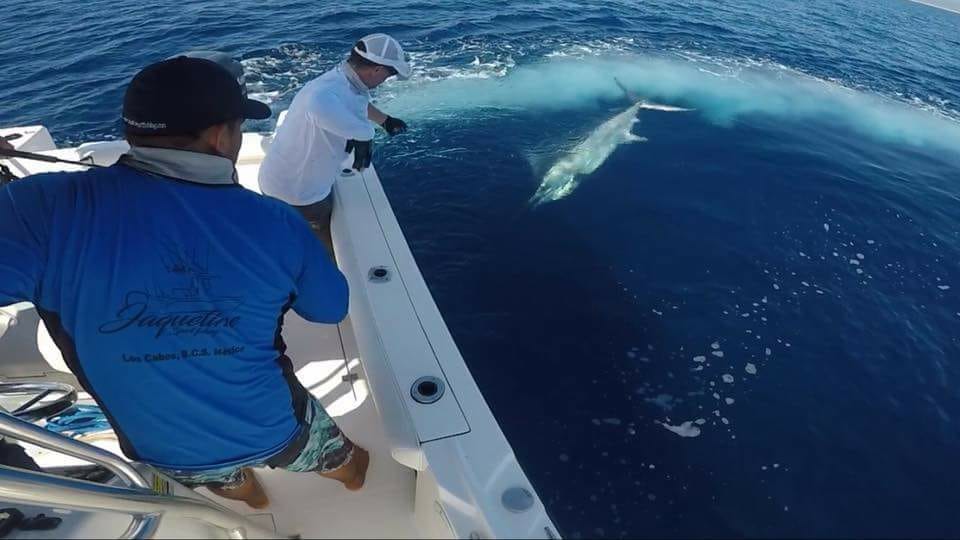 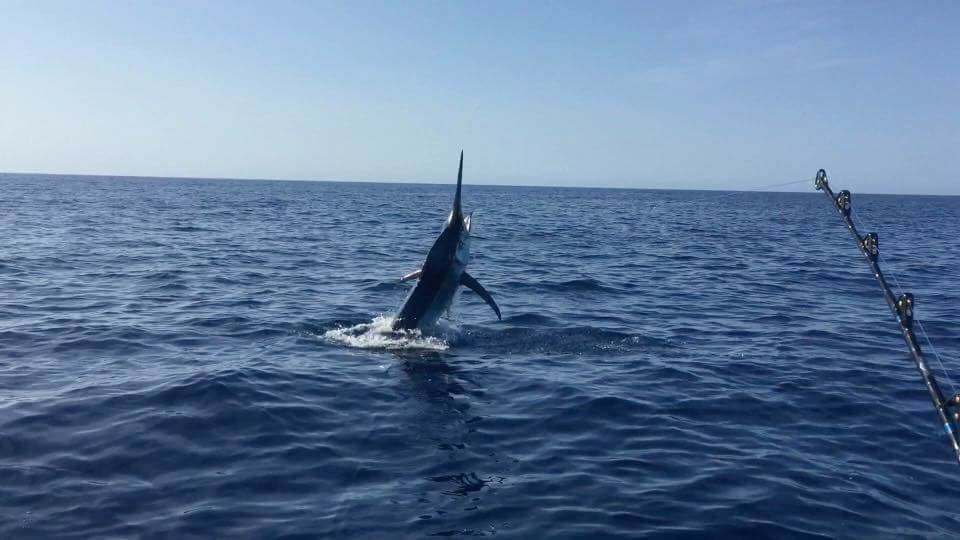 Black marlin coming in hot, Pictures courtesy of Jaqueline, a boat out of La Playita.

Last but not least, Pisces newest addition to the fleet, Pisces 42′ Caliente caught and released 1 striped marlin of about 160 lbs which hit on yo-yos at Punta Gorda. Angler Karl Kehr also landed 6 yellowfin tuna between 10 and 15 lbs each and 2 red snapper of about 10 lbs too using the same methods.