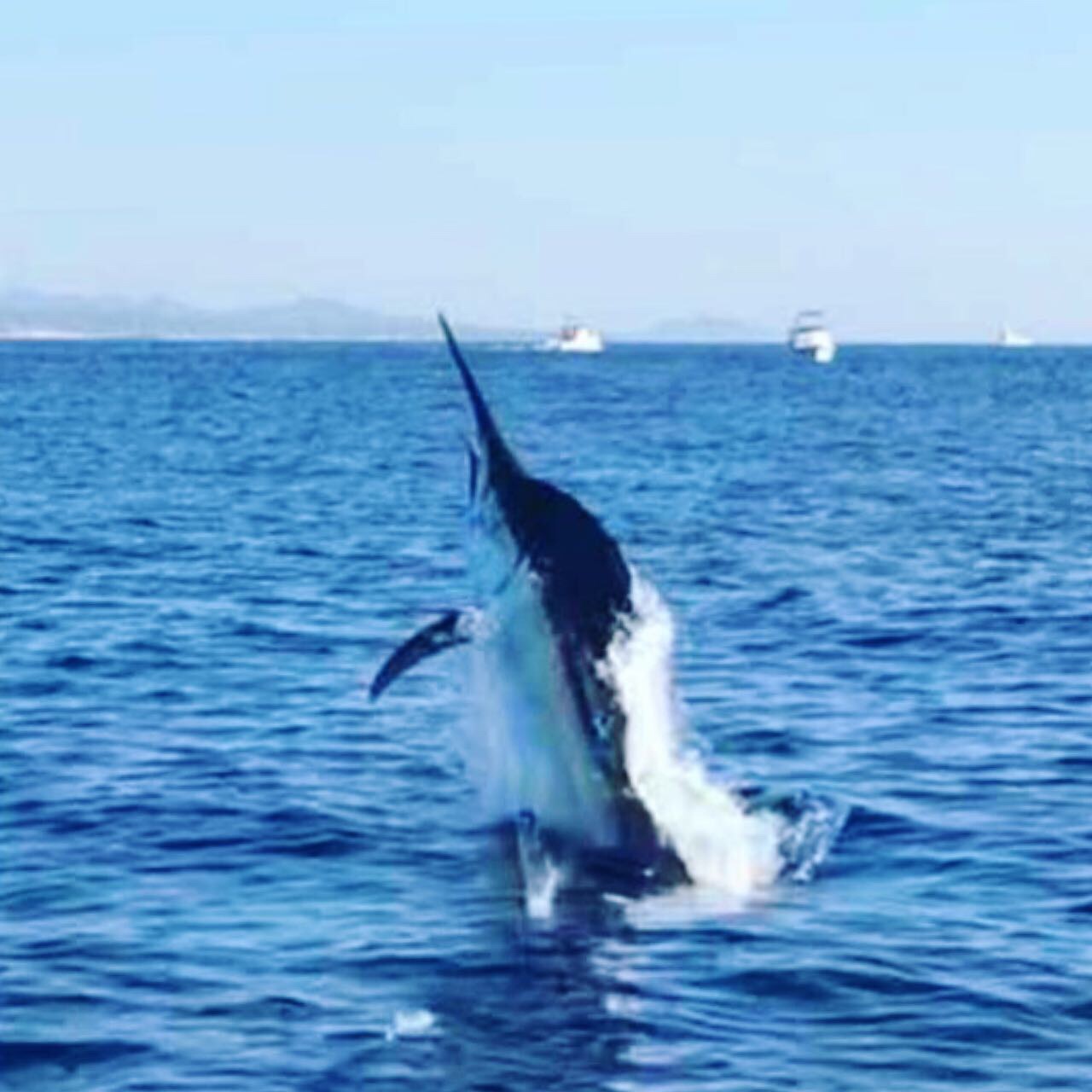 Although this week saw the port closed from the 22nd to the 24th because a tropical storm nearby, the fishing did bring some nice surprises even if it was slightly inconsistent. And by inconsistent I mean for Cabo standards, as on some days we landed one fish per boat, but on others we had BIG fish and good numbers, as you can see by our percentages. Highlights this week include a 700 lbs Black Marlin released on a private boat, Hammer Time, and the epic release of an approx 215 lbs yellowfin tuna on our Pisces 31′ Tracy Ann. Tracy Ann caught a 146 pounder last week as well, and the Pisces 28′ Andrea caught an 128 lbs yellowfin this week too, along with 2 dorado and 2 striped marlin released in the same day! Other boats in the area have also reported big tuna, from 100 – 250 lbs each being caught. Dorado numbers picked up in the beginning of the week, but slowed towards the weekend. Blue marlin have been consistent, with blues caught and released almost daily, ranging from 150 to 280 lbs approx. each. Thirteen blue marlin and twenty-eight striped marlin were caught this week by Pisces. 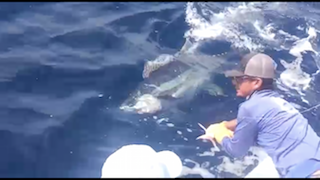 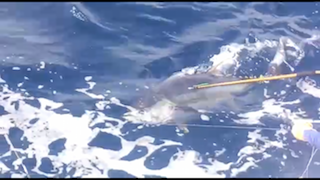 We’ll start off this week with the Black Marlin release. “Hammer Time” owner Matt Campbell sent out his friends on August 30th for a day of fishing at the Iman Bank, where Captain Gonzalo Castillo thought they would have the most luck. Captain Gonzalo is only 24 years old but has already won multiple big money tournaments such as the Bisbees (the richest tournament in the World) and WON Tuna Jackpot – both coming up in October and November. He tells the story, “We never expected it to be a marlin, and definitely not a Black of this size. I thought it was another tuna when we got the hit”. He explained, “We had drifted out from the Bank about a mile, so we were about 5 miles offshore total, and we were repositioning ourselves, slowly trolling back to the area where we had already caught a 70 lbs Yellowfin Tuna.” His brother and deckhand, Freddy Castillo had just caught a Green Jack for bait and put it on a 30 Shimano Tiagra with 80 pound line and a 130 lbs leader, just in case they found a Striped Marlin.

As they slow trolled back to their spot it was adios Green Jack! The Black erupted from the sea only a few minutes after taking the bait and it was ON. Angler Trevor Conroy from Calgary did a great job of working the fish and fought it standup for about two and a half hours. They only saw the fish twice, when it first took the bait and then about 3 and a half hours later just before the release. Gonzalo estimated this marlin at about 700 lbs. The fight for the release lasted 4 hours and 20 minutes according to Gonzalo.

This video shows the moment the crew and anglers realized they

had a Black Marlin on the line!

“The intent was always to release her. She broke off just as we we’re closing in. The leader clip hit the reel and she snapped the line”, Gonzalo said. They also caught another two red snapper and three nice dorado, making for an epic day.

In the fleet, we saw Pisces 28′ Andrea become our top producing boat with consistent fishing every day. They started off the week with 15 dorado caught, and 9 released, only keeping those of about 10 lbs. The dorado hit on feathers and hoochies out of Solmar and the Old Lighthouse area.  This same day, Pisces 42′ Caliente did well to catch 12 dorados of around 15 lbs each, releasing six. They also hit on hoochis and green feathers at the Old Lighthouse. 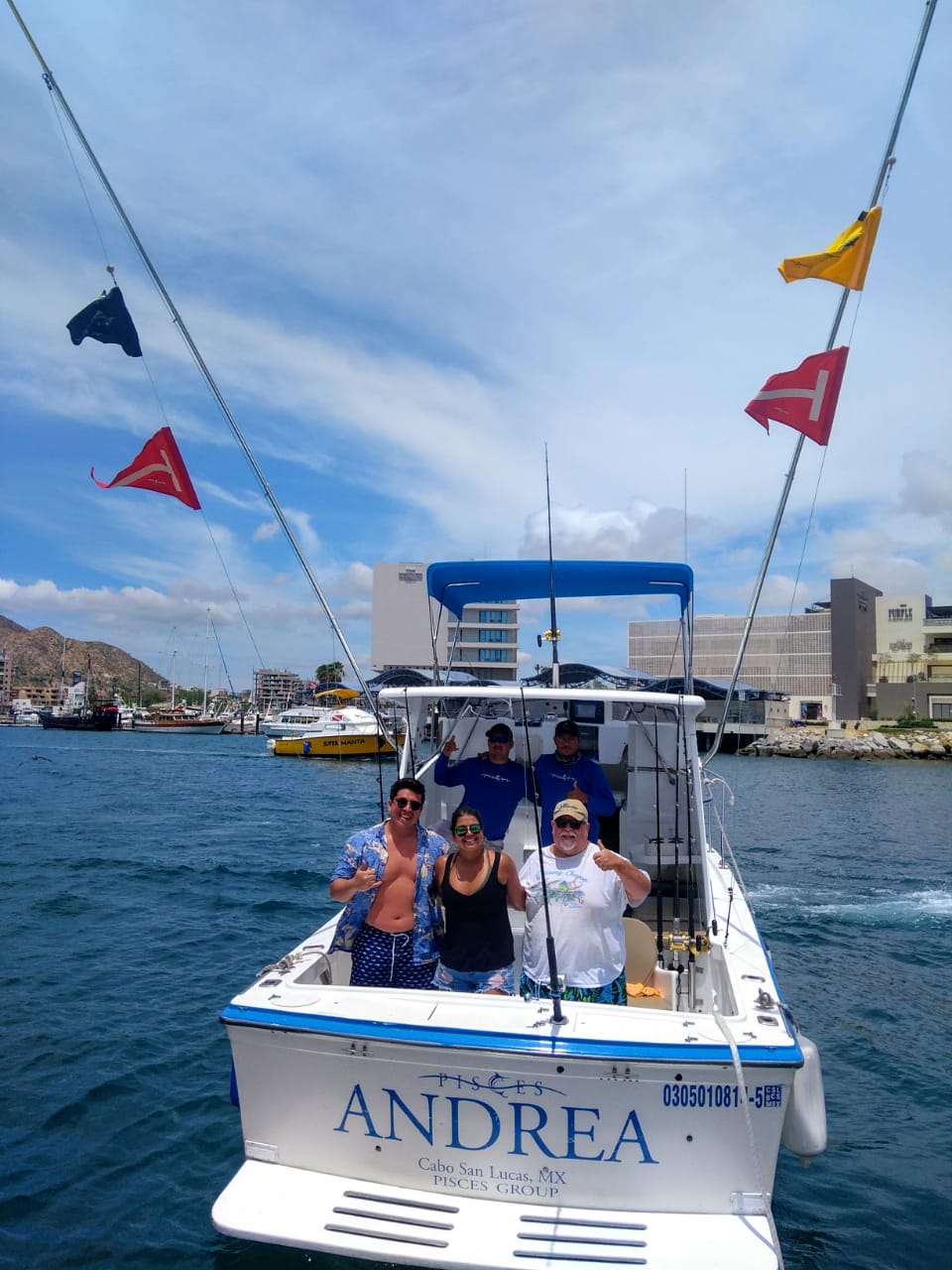 On the 28th of August, the Andrea found a small dorado they released, along with an approximate 200 lbs Blue Marlin. The marlin took live caballito bait about 30 miles out, at the 130 spot for anglers Mara, Robert and Robert Meil Rudolph from Florida. The Andrea added a striped marlin to the mix the next day, this time at La Herradura on dead caballito for angler James Mackey from Boston, Massachusetts. James Decided to head out again, this time heading to Golden Gate aboard Pisces 31′ Tracy Ann. There, he and Viaeney Morales released a nice striped marlin on dead caballito bait and landed a beautiful yellowfin tuna of about 215 lbs. This was by far, not only the biggest, but the most groundbreaking tuna caught by Pisces not only in the week, but EVER. And we say that without exaggeration. Why? Well, James has now become the first client we have ever had who has decided to tag and release a yellowfin of this size. We were so proud to see this decision coming from one of our anglers, which shows a change in perspective, in terms of tuna fishing and sport fishing in general. Of course, Captain Julio Castro was very happy to oblige.

Video of the Approx 200 lbs Yellowfin being released on Pisces 31′ Tracy Ann.

The next day out, the 28′ Andrea found dorado again, two of them of about 12 lbs, which hit on blue feather lures out at Golden gate. They also landed 2 yellowfin one of 10 lbs and the other of 128 lbs! These hit on cedar plugs lures at Golden Gate as well. Two striped marlin released, which were about 100 lbs each, hitting on live caballito and ballyhoo bait at the 11:50 Spot. Angler was John Mc Cune from Texas.

More yellowfin on the 31′ Ruthless which landed 19 total for anglers from Fountain Valley, CA: Jay and Justin Trementozzi, Tony Hocker and Hannah Friel. The tuna hit on feathers and cedar plugs at the 230 Spot about 32 miles out. They also released an 110 lbs approx striped marlin. 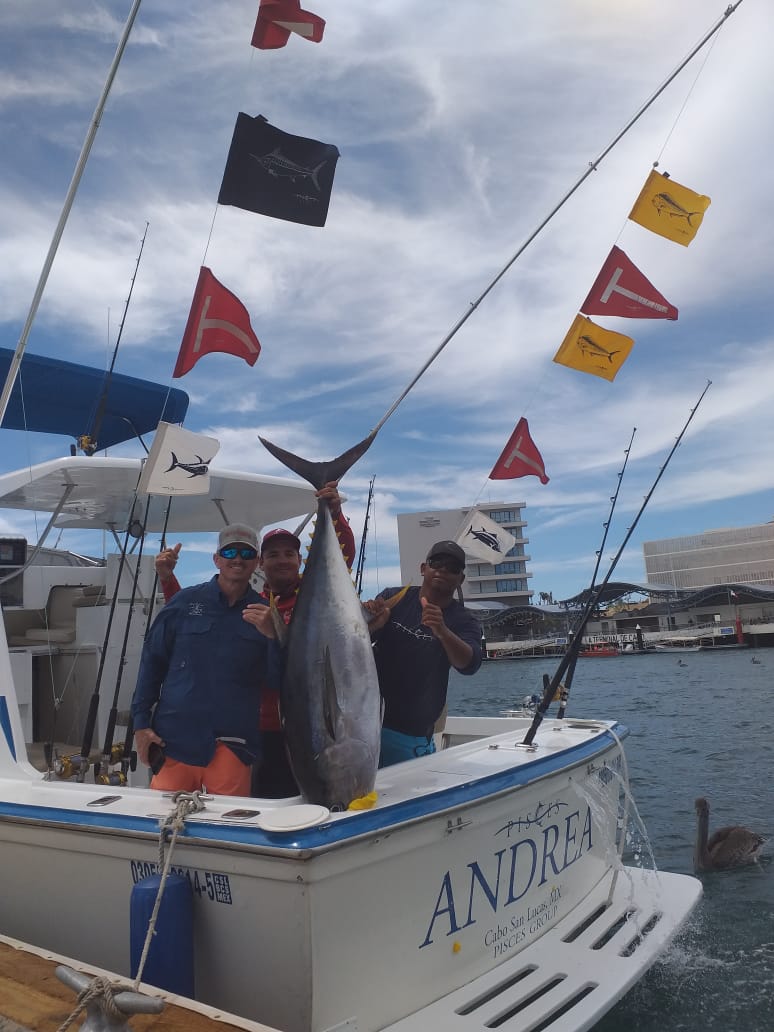 Pisces 30′ Karina, has by now proven herself with consistent fishing weekly, and this week was no different. Two striped marlin released at the 95 Spot by John Flood and June Higashi and the next day another 2 striped marlin released of about 60 and 120 lbs approx. hitting on live bait  and a red/black lure at the 11:50. Anglers were John and Kerin Hanley. The Karina and anglers Dustin Burkhalter and Jennifer Smith from Texas released an approx 280 lbs Blue Marlin at the 95 Spot as well. This fish hit on a guacamayo lure.

And Last but not least, Pisces 35′ Bill Collector 2 released 3 striped marlin from about 80 to 120 lbs each about 3 miles out of the Cerro Blanco, and kept 3 bonitas. Young anglers Elina Hibel, 12 years old, Ione Rose, 6 years old and Nolan Hibel, 8 years old, did a fantastic job!

WEATHER CONDITIONS: Slightly overcast, small swells only, some humidity – Port closed August 22, 23, 24 due to nearby storm which brought rain.