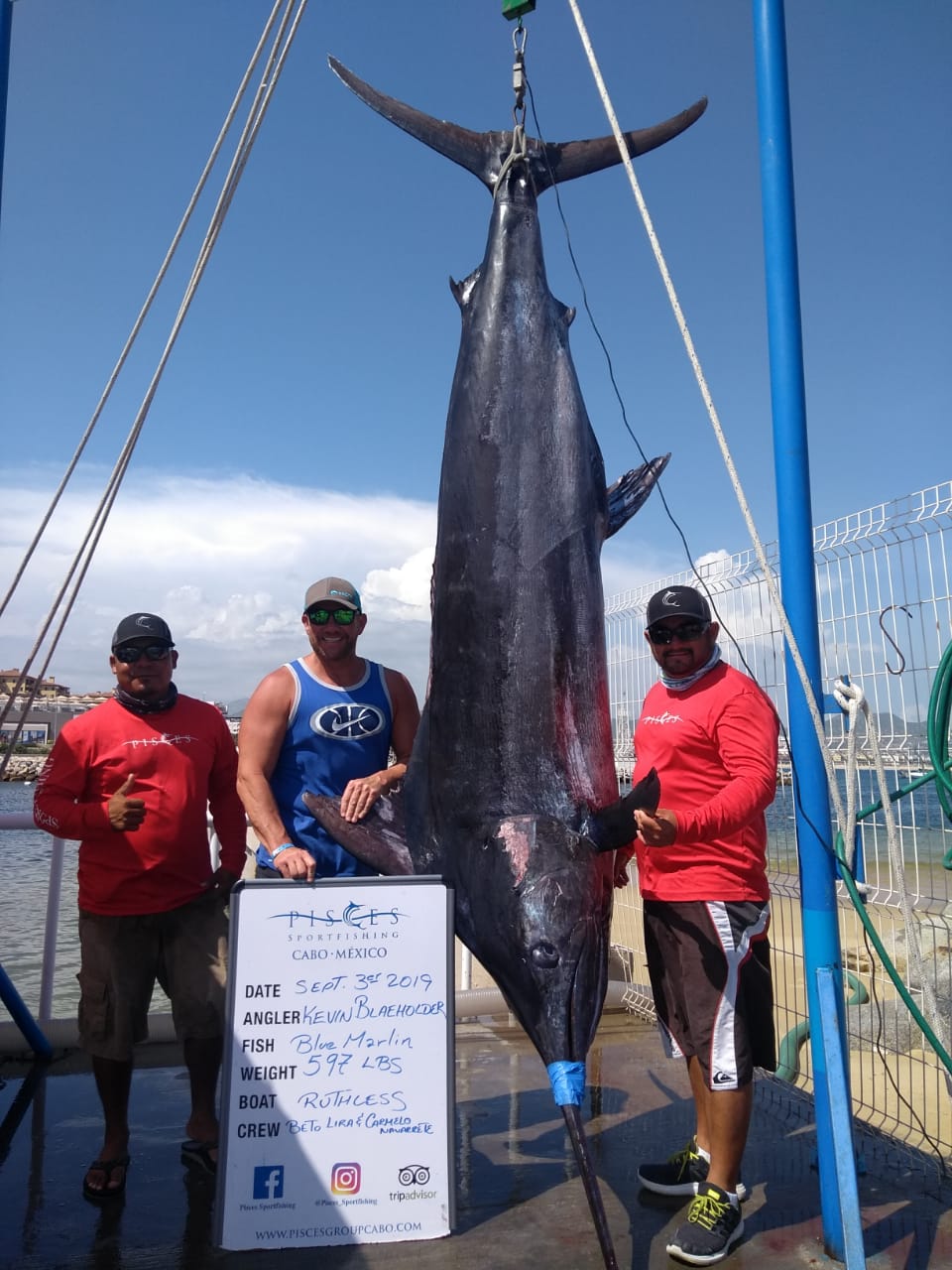 We sure don’t get tired of saying it, ITS BEEN ONE HELL OF A WEEK in Cabo! This week was one of our best for this time of year for billfish, with a whopping 132 billfish caught and released between 30 boats, which included Sailfish, Blue marlin and Striped marlin. Throw in a nice tag recapture and re-release on one of 3 striped marlin caught on Pisces 42′ Caliente too and a 597 lbs Blue Marlin caught on Pisces 31′ Ruthless by angler Kevin Blaeholder from Texas. The weigh-in was bittersweet because the original intent was to release the fish, but the meat was shared by angler and crew and donated to our partner organization “Feeding Los Cabos Kids” , which has 14 community kitchens serving some of the poorest kids in the Los Cabos area. Apart from billfish this week, we still saw good tuna numbers for those that ignored the hot billfish bite, and they reaped rewards, for example, Pisces 25′ No Borders landed a 110 lbs Yellowfin. More dorado showed up towards the end of the week, and in decent sizes, ranging from 15 to 30 lbs each. We also saw a few wahoo (about 25 lbs) and one spearfish to close out the week, along with a few big rooster fish of about 50 lbs. Fishing has been divided between the Pacific and Sea of Cortez, with a stronger shift back to the Pacific for billfish towards the end of this week. 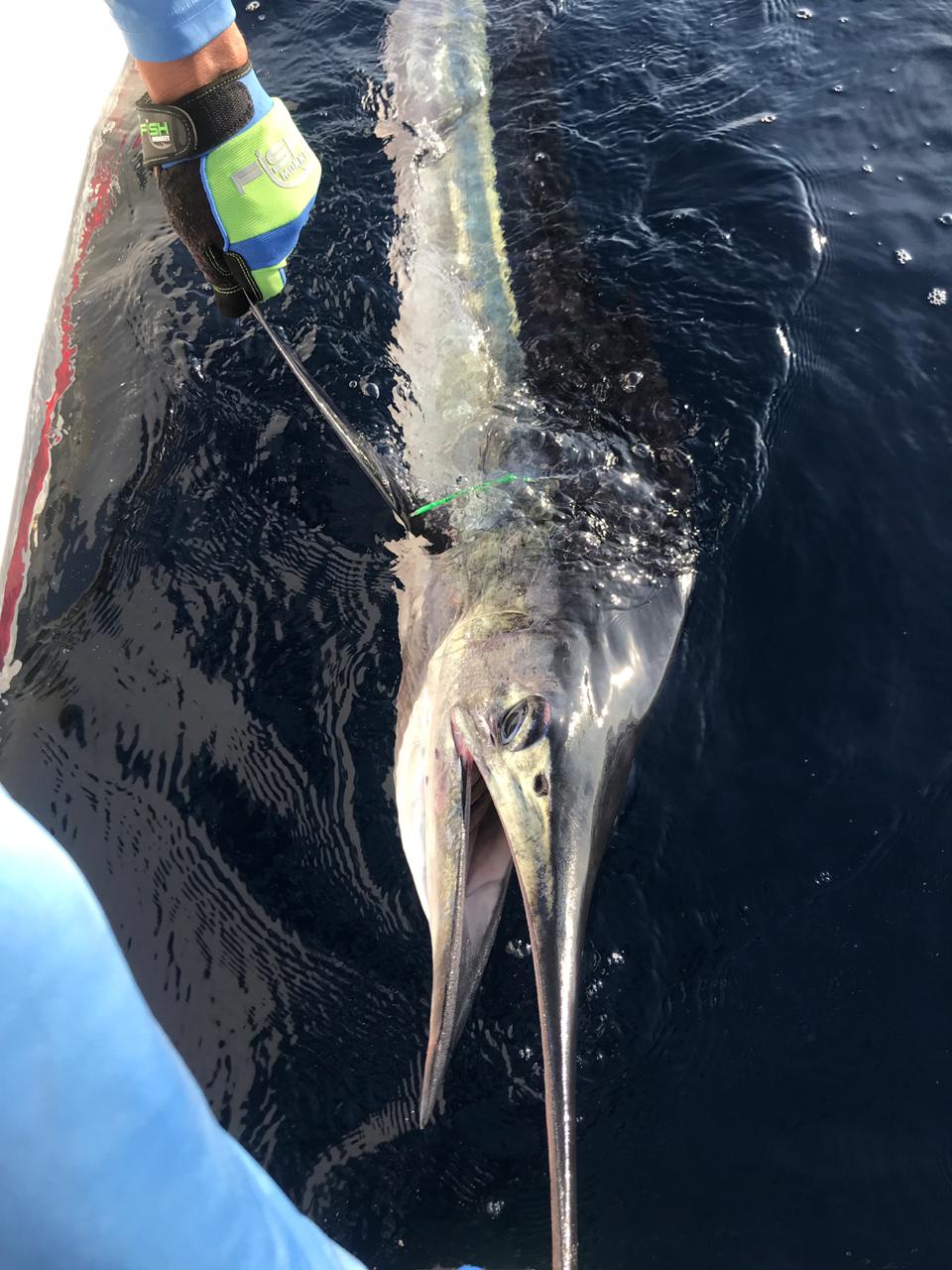 First off, our 597 lbs Blue Marlin caught on September 3rd. A beauty landed by Kevin Blaeholder from Colorado. He was targeting tuna, and the crew of the Ruthless, Beto Lira and Carmelo Navarrete headed to San Jaime Bank. They were trolling at about 30 miles out, when the Blue hit a yellow/green lure.

Captain Beto said, “We had the tag stick ready as soon as we saw it. But it dove down deep, and although I tried to aid the angler as much as I could with the boat, about an hour and a half or two into the fight we knew it was gone… this would have been a nice one to see swim away, but we’re glad it is going to good use”.

All the fish except for a small portion that the angler and crew kept is being donated to 14 Community Kitchens that serve 50 to 100 kids a day in the poorest neighborhoods of Cabo. We have officially partnered with these kitchens and any angler who fishes with us and wants to share their catch, can know it’s going to those most in need. Congratulations to the crew and angler that worked very hard to bring the fish to the boat by reeling and hand-lining it up for the last hour or so. You can read more of this in USA Today’s FTW Article.

After this day, billfish madness ensued, with 11 marlin released by Pisces 31′ Rebecca on their top day. Anglers were Art Hevener and Art Hevener IV along with Shaun Ziconni from Pennsylvania. In 4 days of fishing aboard Pisces 31′ Rebecca they released 25 marlin, including a nice 250 lbs Blue that hit on a live skipjack at Punta Gorda. They focused their fishing efforts on their two most productive days about 20 miles South of Cabo. Most of the Striped Marlin weighed between 100 and 130 lbs approx. Other days they headed to Cerros de Arena Area and La Ballena. When here, they also landed Dorado, which hit on ballyhoo and sardines. They caught 7 dorado total, with the largest of about 25 lbs. 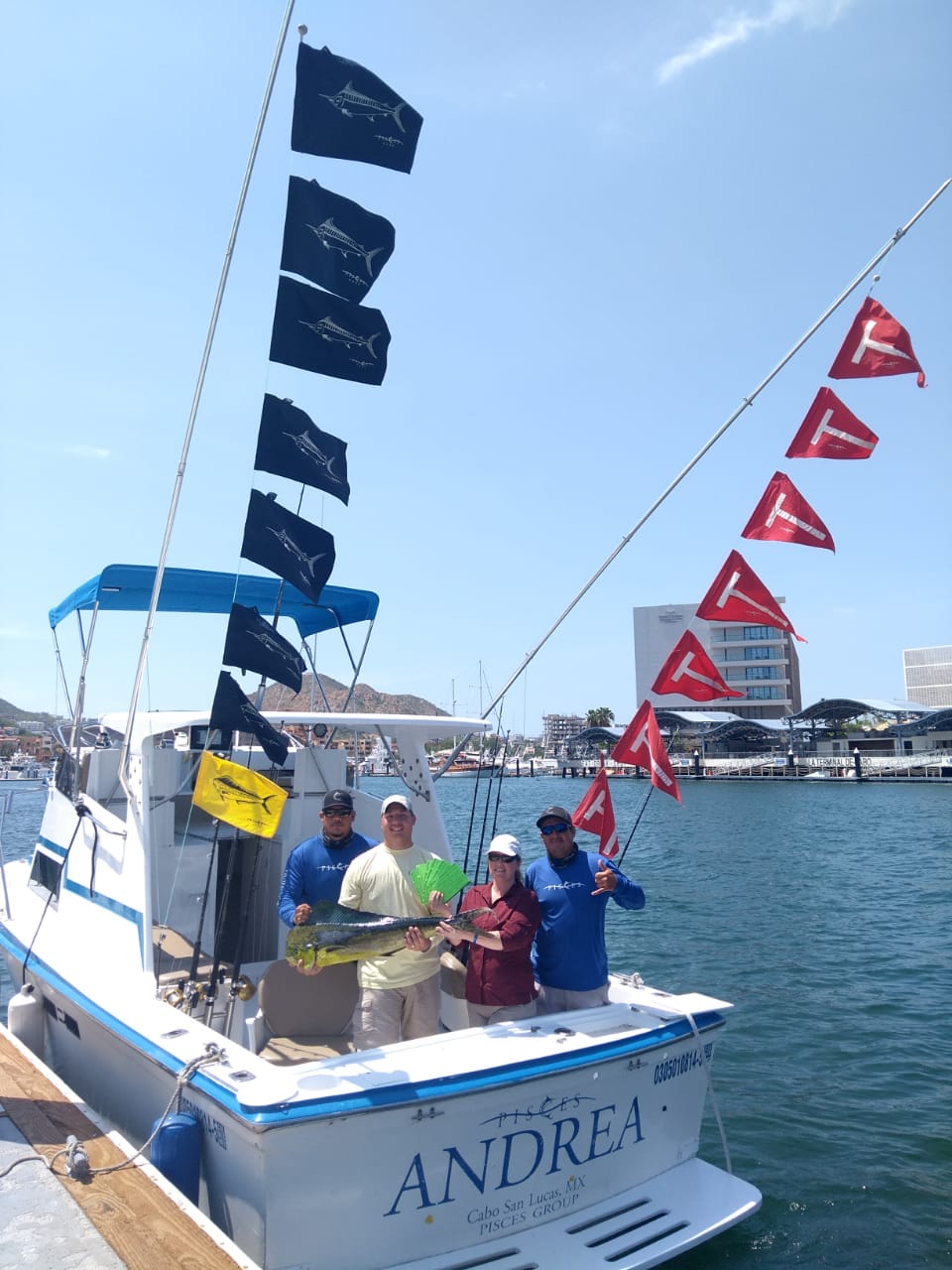 Billfish madness looks like this: Pisces 28′ Andrea released 7 Striped marlin and kept one dorado this day.

Pisces 30′ Karina also had a productive week, with a nice blue marlin of about 200 lbs caught and released by John and Alicia Little. The blue hit on caballito bait just before the 95 Spot; there they released an approx 140 lbs striped marlin as well.  The next day Karina found the honey hole, with anglers Kirstyn and Lawrence Groop from AZ releasing 7 striped marlin between 80 to 120 lbs each which hit on live and dead bait about 20 miles South of Cabo.

On their best day Pisces 31′ Tiburon, caught and released 7 striped marlin and 2 sailfish with anglers Doug and Mary Jo Walker, Ed Williams and Lenora Ellingburg from Texas. They too, fished about 20 miles south of Cabo and used live and dead bait. Marlin ranged from about 80 to 120 lbs each, while sailfish were about 60 lbs each. 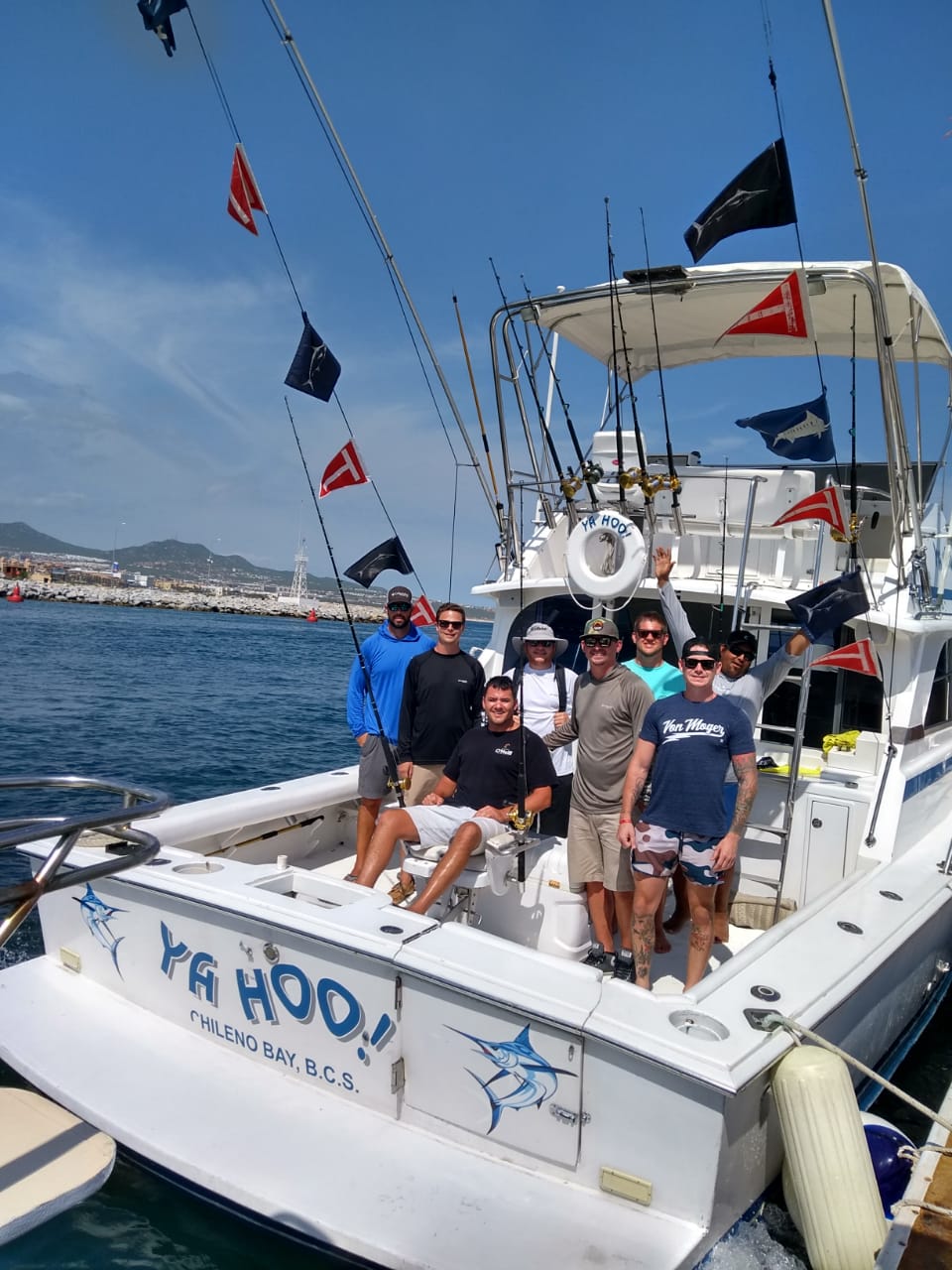 Pisces 42′ Yahoo also got in on the action, releasing 6 striped marlin that hit on a tigrillo lure, and live and dead bait, with anglers Donald Murray JR, Emily Fochs, Ramzi Halim, Robert Cocanougher JR doing an excellent job at angling the fish. The next day Pisces 42′ Yahoo headed out again, this time toward Migri?o. Anglers from again released 6 striped marlin, using ballyhoo and live bait mostly. Fish ranged from 100 – 120 lbs each.

All boats fishing these two areas over the two days, without exception, released upwards of 6 Striped Marlin each, with live and dead caballito bait and ballyhoo being preferred. 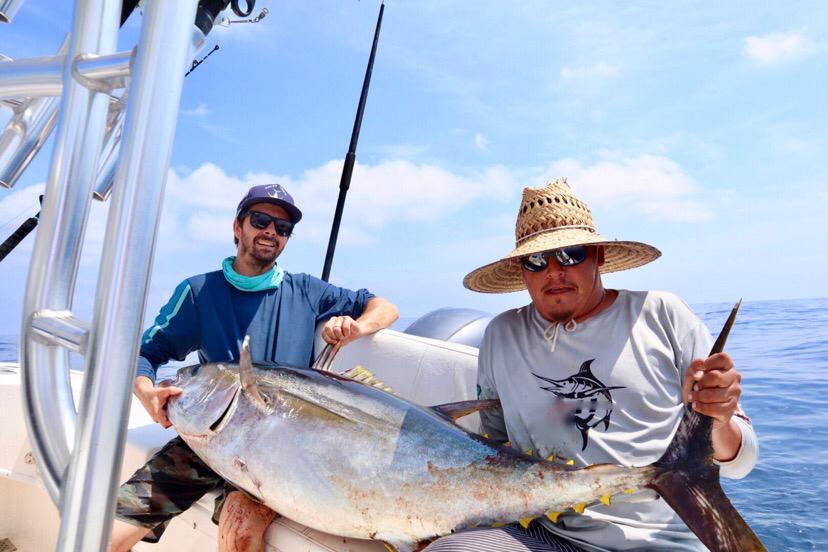 Pisces 25′ No Borders also had a good week with a half day that produced a striped marlin and sailfish. The next outing, Ryan Caughren caught a 110 lbs yellowfin that hit on a blue and pink lure almost 50 miles out of the 220 Spot. 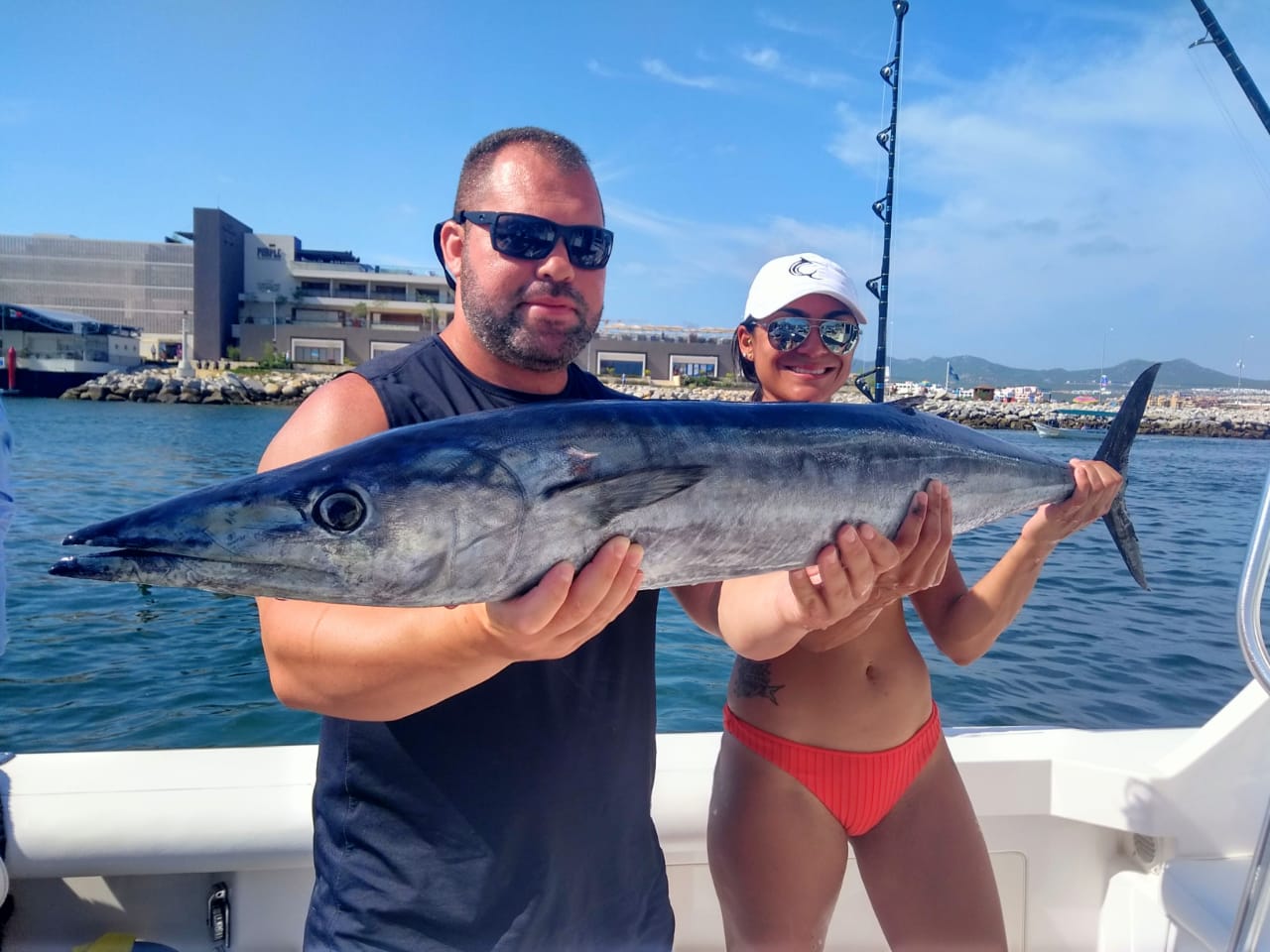 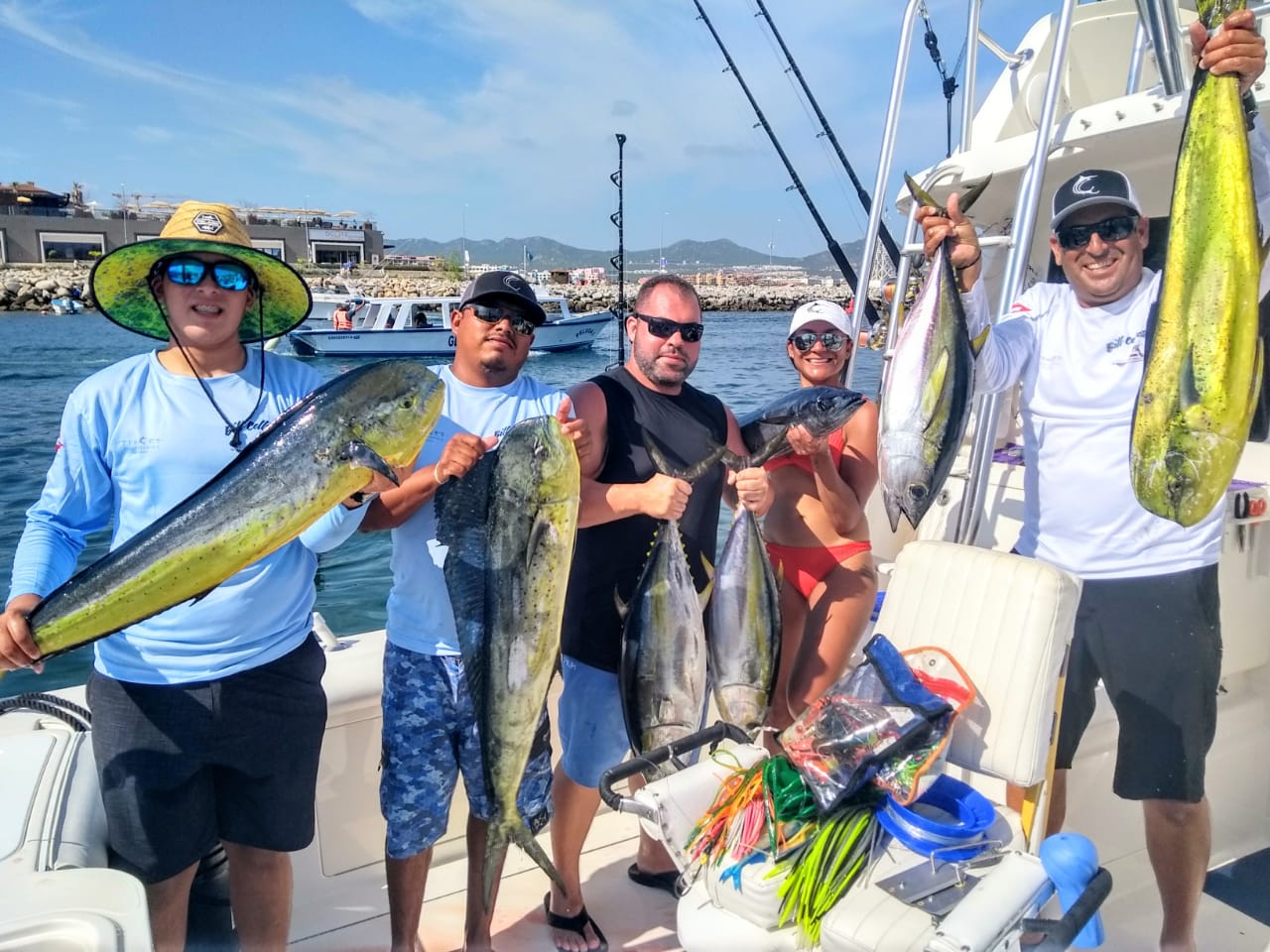 Pisces 31′ Karina also did well to find some Tuna for anglers Chloe Turner and Ryan Wells from Texas. They headed about 40 miles out of San Jaime and landed 12 yellowfin on cedar plugs and using the kite. The largest was about 25 lbs. Anglers Chloe and Ryan also fished the week on Pisces 31′ Ruthless. The previous day they released 3 striped marlin between 80 and 110 lbs. The marlin hit on dead bait, also landing 2 yellowfin on cedar plugs at San Jaime.

Pisces 35′ Bill Collector 2 had a great week, with anglers Karina Cuellar and Scott Wilkins from Houston, who fished the previous day on Pisces 42′ Hot Rod and caught two blue marlin of around 200 lbs each. Now they  wanted wahoo and other eating fish, and found them quickly, with Captain Gil Castro at the helm. They caught 3 dorado of about 15 lbs, 7 yellowfin tuna of about 15 and 20 lbs, 8 skipjack (released) 4 triggerfish and 1 wahoo of 26 lbs, which hit on a purple rapala lure. All others hit on sardines. 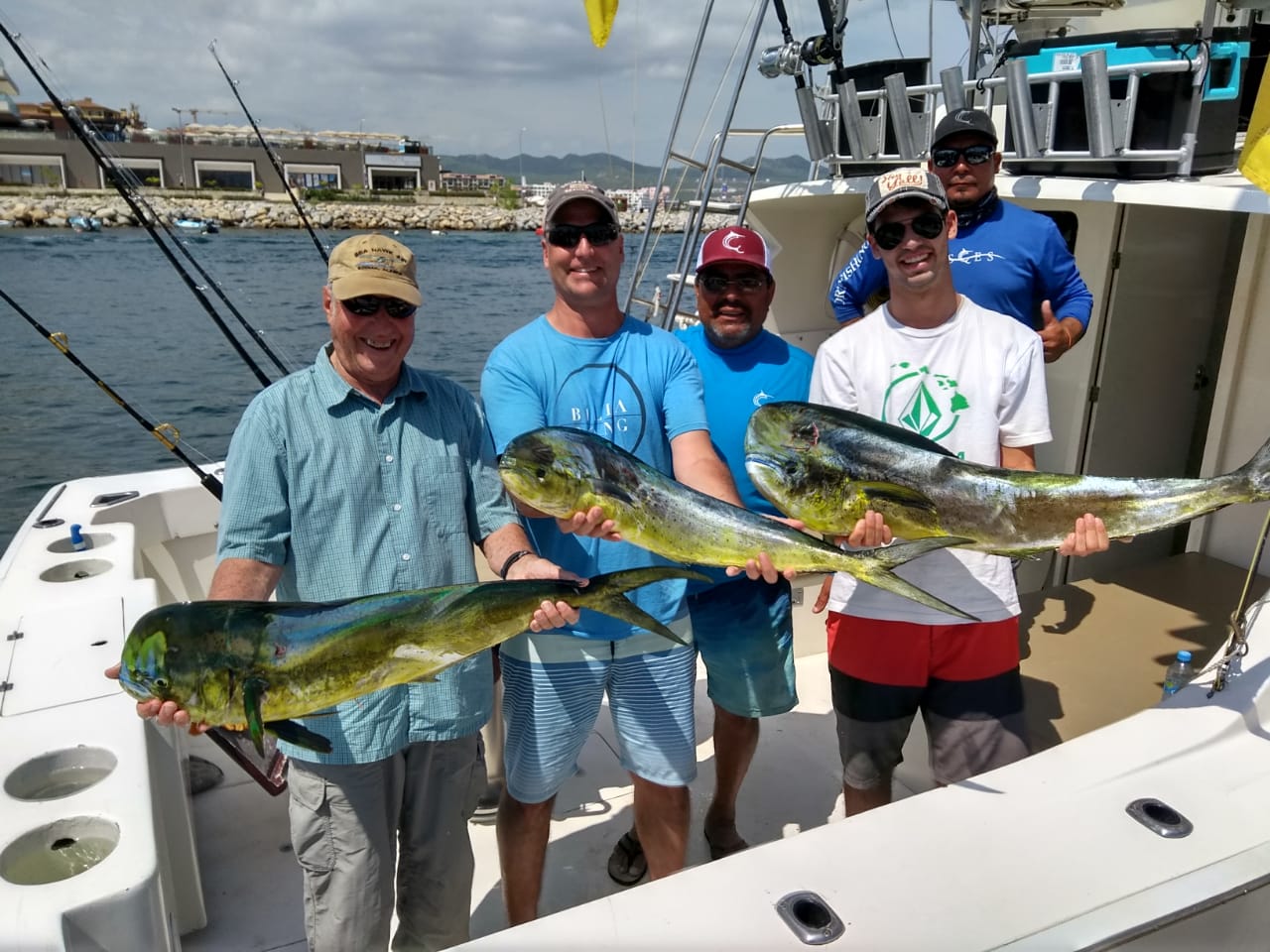 Pisces 24′ Panga Anamar II found dorado as well, at Rancho San Lucas on feathers and tagged and released a very nice roosterfish of about 50 lbs, which hit on caballito bait at Las Margaritas. Anglers were Christina Franchini and Mike Olivero from NY.

The Spearfish this week was caught by Pisces 28′ Adriana at the 1150 Spot on Dead Caballito bait. It weighed about 80 lbs. Anglers Andrew, Matt and Daniel Shaw from Florida also released a nice striped marlin of about 120 lbs. 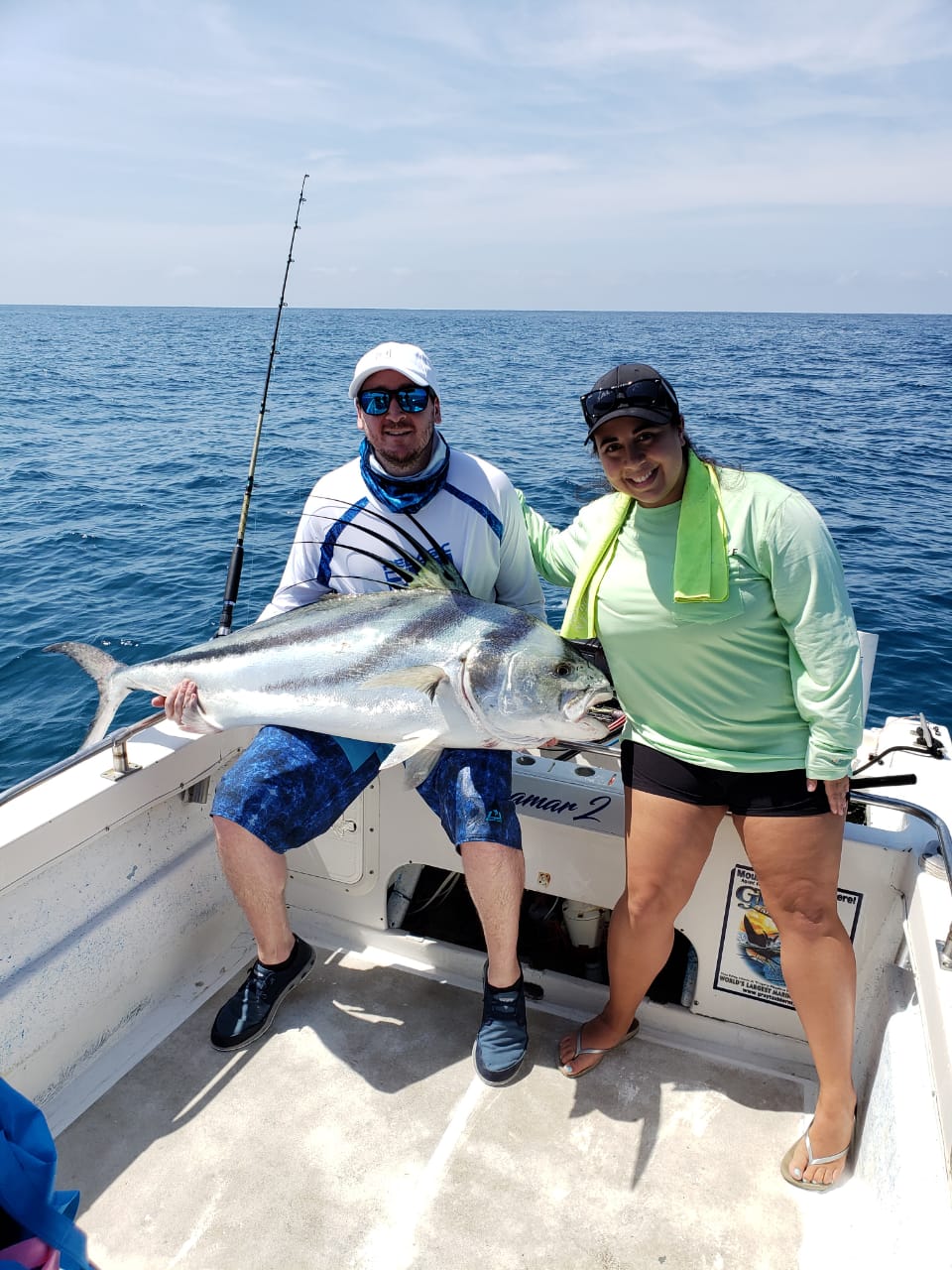