Hot hot hot – Not only has the weather turned up, so has the fishing! Although anglers are not catching too many billfish per boat, we are seeing greater numbers of blue marlin being caught and in the 200-300 lbs range. Again this week we had the appearance of 1 spearfish caught on the 42ft Hot Rod. But there’s no stopping the tuna, which have been the most widely caught fish this week. Most tunas were football sized but we had a few in the 100+ lbs range. Roosterfish, sierra, jack crevelle and skipjack were some of the most popular game fish caught this week as well. 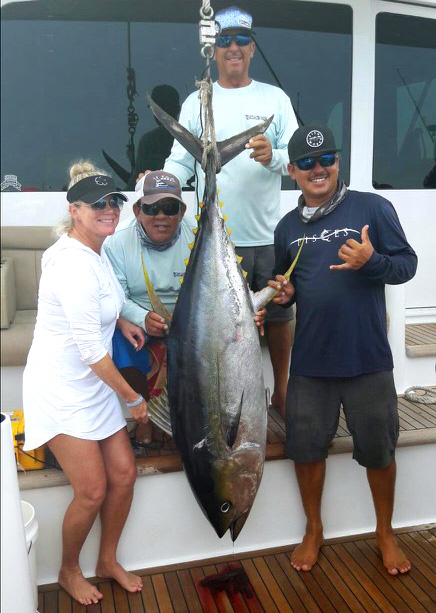 Below you can find a selection of our top catches this week:

The 61ft Tag Team, captained by Nayo Winkler and anglers from Florida put on quite a fight to land their 100lbs yellowfin tuna which was lured to their lines by caballito bait out at the 11:50 Spot. They managed to boat the fish after a grueling 4 hour fight!

35ft Valerie had a great day on August 7th, setting the pace for the week, catching a nice 15 lbs dorado and 24 yellowfin tuna ranging from 8-15 lbs each, all caught on cedar plug lures out at San Jaime by anglers from Idaho.

Captain Abel Ramirez of the C Rod had a similar day on the 8th, with the Seedig  family from California landing and releasing a nice 100 lbs sailfish in addition to 21 yellowfin tunas. The sailfish was caught on caballito bait and the tunas on cedar plug/ feather lures.

The Tracy Ann with anglers Thomas and Hemingway from Kingwood, TX,  decided to stay in a little closer to shore and did well with that decision, finding themselves hooked up to and landing 2 dorados, 8 tunas and 1 sierra all at Gaspare?o on cedar plug lures. These same anglers fished another day, but this time in search of marlin. Again, they found what they were looking for as Captain Julio Castro put them on to 1 striped marlin and 1 blue marlin out at La Herradura, both released, they took to caballito bait. What a great two days of fishing!

As for marlin, the most fruitful area this week was out at the 95 and 1150 spot, as well as La Herradura. The 31ft Tiburon and Grube family from Pennsylvania caught two blues weighing approximately 200lbs which hit on tiger striped and blue/white lures at the 11:50. Whereas the 35ft Valerie did well to land a 350 lbs blue marlin on petrolero lure out at the 11:50 Spot for Joshua Stein from New York.

WEATHER CONDITIONS: Partly cloudy skies, some swell in the water but most days calm seas, one day port closed, air temperatures in the high 80’s.

– Based on the catches of Pisces Sportfishing Fleet by Rebecca Ehrenberg.