What a wild week it’s been. A bit of unexpected weather: thunder storms, lightning and even a bit of hail here in Cabo these past few days. Usually it does not rain around this time of year, let alone hail, ever! But two quick storms past through the city, not lasting more than an hour or so. Colder temperatures also finally showed up this week and it seems to have had an effect on fishing. Boats this week had more luck with tuna and smaller game fish than marlin and although dorado numbers are still good, they are lower than the previous week’s. With all this said, fishing was good and of great variety! Only three boats got skunked and one was because of seasick anglers that wished to return early.

Starting off the week strong was our Pisces 28ft Adriana, which in the first two days of the week caught a crazy amount of fish of all kinds! On December 10th, anglers from Texas caught and released one striped marlin, out form Los Arcos on a hoochi lure, as well as three yellowfin tuna of about 10 lbs each which also landed on hoochi lures. As if this wasn’t enough, they also landed three dorado of around 15 to 18 lbs this time out of Migri?o, again on hoochi lures as well as a nice sized sierra. 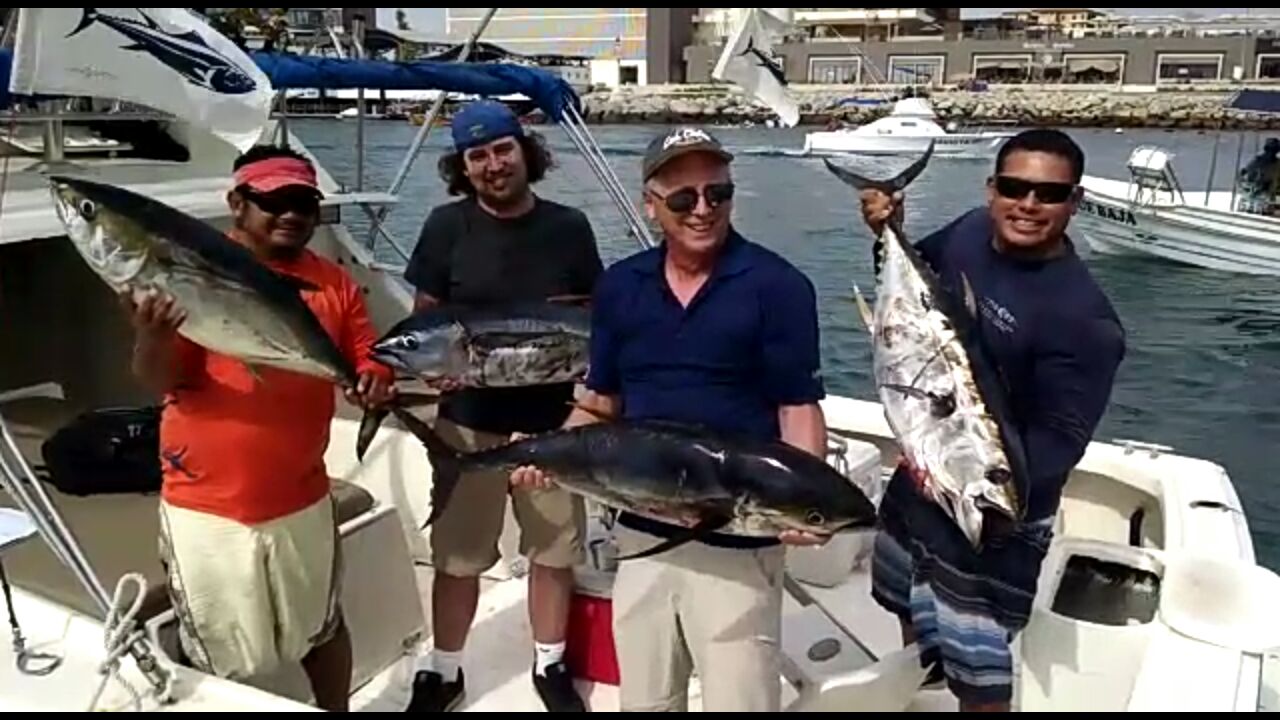 Anglers aboard the Pisces Ruthless with their tuna catch

The next day the Adriana landed three dorado again, around the same size, except this time out at Pozo Cota. Then they found luck out at La Antena, where they caught one yellowfin tuna of about 20 lbs and one skipjack on cedar plugs, followed by three groupers, one red snapper and one triggerfish (these on mackerel bait). Needless to say, anglers Barbara and David Fiocca had a great day and some fresh fish for lunch!

Pisces 31ft Ruthless also had a nice day for marlin, catching and releasing two striped marlin of about 120 lbs each, which anglers the Moorer’s and Stubenrouch’s caught on mackerel bait. They also landed twelve yellowfin tuna on cedar pugs and feathers all out from the Old Lighthouse.

And how about Taylor and Tamara Whitcamp, newlyweds from Roswell, New Mexico, here in Cabo on their honeymoon who caught and released one striped marlin of about 130 lbs on mackerel bait out from La Herradura. This was Taylor’s first striped marlin! Him and the Mrs. also caught five yellowfin tuna aboard the Pisces 31ft Tracy Ann that day. 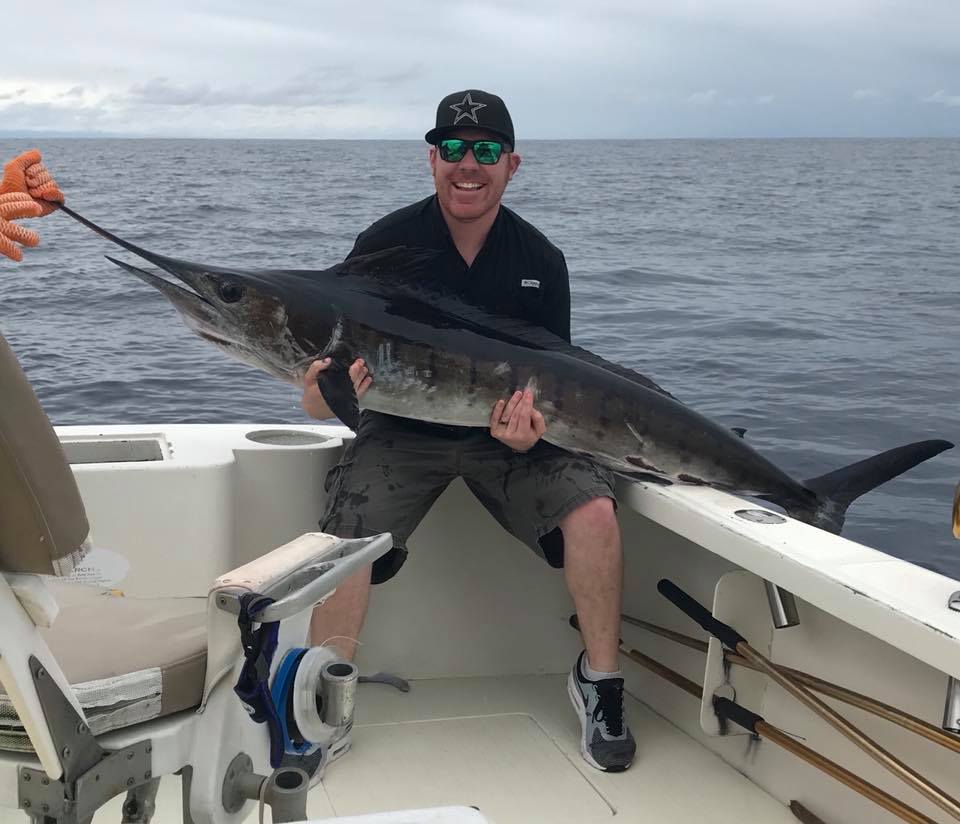 Taylor Whitcamp with his striped marlin, which he released, aboard the Pisces Tracy Ann

Finishing off the week we had the 35ft Pisces Knot Workin, with anglers Bill Bunting and Richard Schwab who fished two consecutive days, close out a great week with a total of 28 fish caught! They landed one dorado and seven yellowfin their first day out at Cabeza Ballena on sardines and the next day, with rain and all, found themselves 17 dorado! Again, they landed these on sardines, but this time out from Balmaceda. They kept 10 fish, the larger ones of about 15 and 20 lbs and released the smaller specimens, of about 10 lbs. They also caught three more yellowfin tuna, of about 12 lbs each.

And for the luckiest half day of fishing I’ve ever seen, the Pisces 28ft Andrea and anglers Daniel and Linda Brubaker caught one dorado, one sierra, one grouper, one red snapper, nineteen triggerfish, as well as one sheep head fish. All fish were caught just before Chileno. 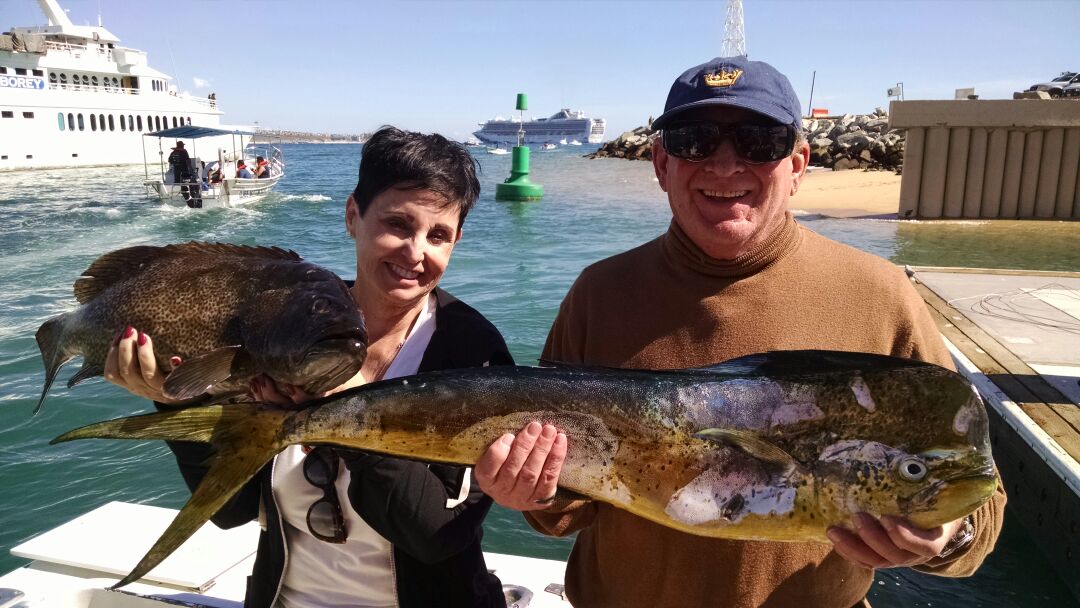 A total of 313 fish caught by Pisces boats this week, with 14 being marlin, 184 being tuna and 62 dorado. All catch limits well respected.

WEATHER CONDITIONS: Overcast, a few quick rain storms and showers. Some chop in the water.

A total of 313 fish caught by Pisces boats this week, with 14 being marlin, 184 being tuna and 62 dorado. All catch limits well respected.

WEATHER CONDITIONS: Overcast, a few quick rain storms and showers. Some chop in the water.