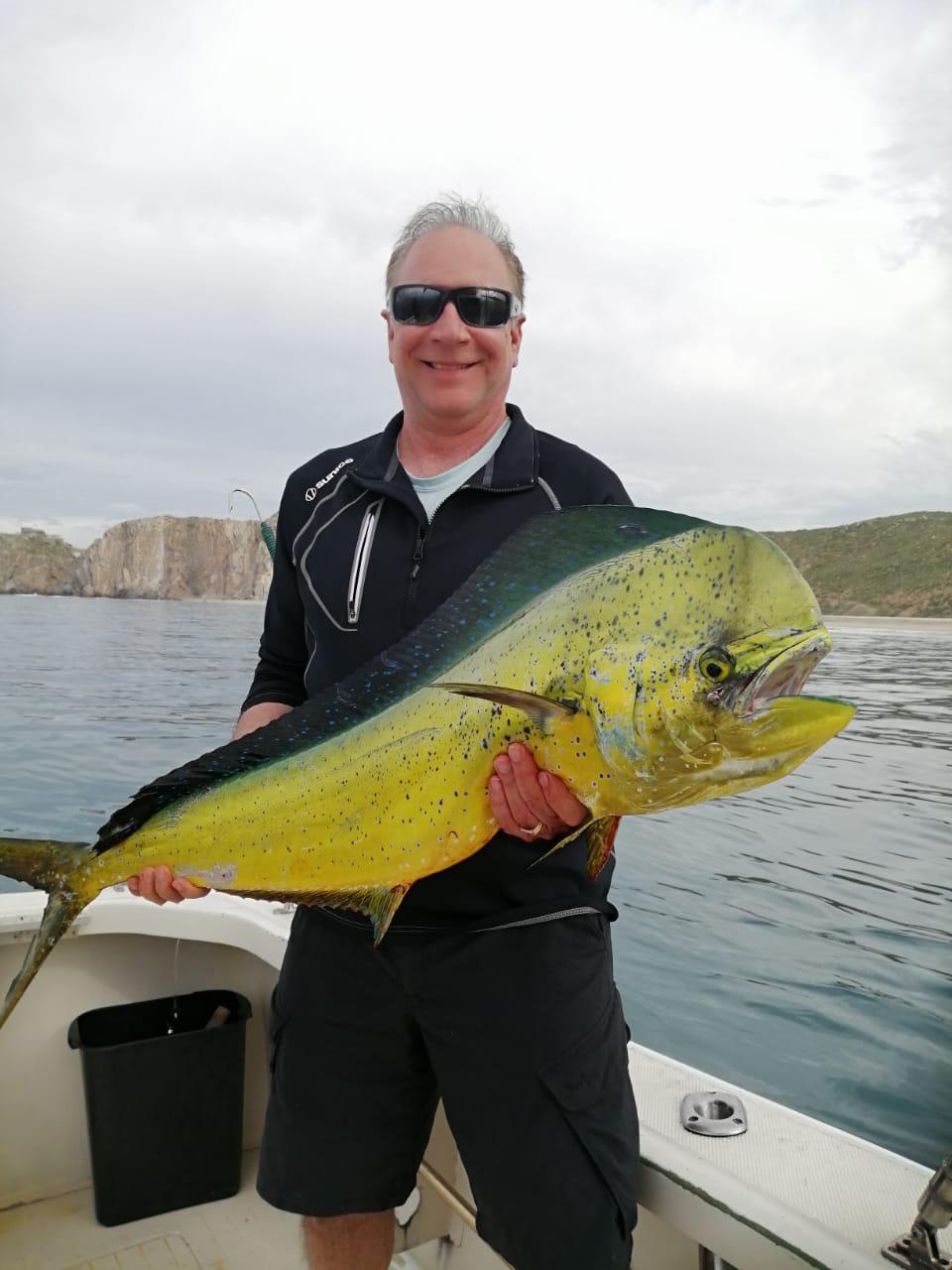 Another truly amazing week of fishing in Cabo. We had an incredible catch success rate of 100%! All sixty-nine boats out caught fish, and in good numbers. The dorado fishing produced the most, with 280 fish caught (of course respecting catch limits).

Most fish were of nice size as well, ranging from 10/15 lbs to up to 30 lbs each. The dorado were found from the Old Lighthouse and up the Pacific coast until Elias Calles. They took mostly to live and dead bait, mackerel mainly, as well as varied feather lures, blue/white lures or green. 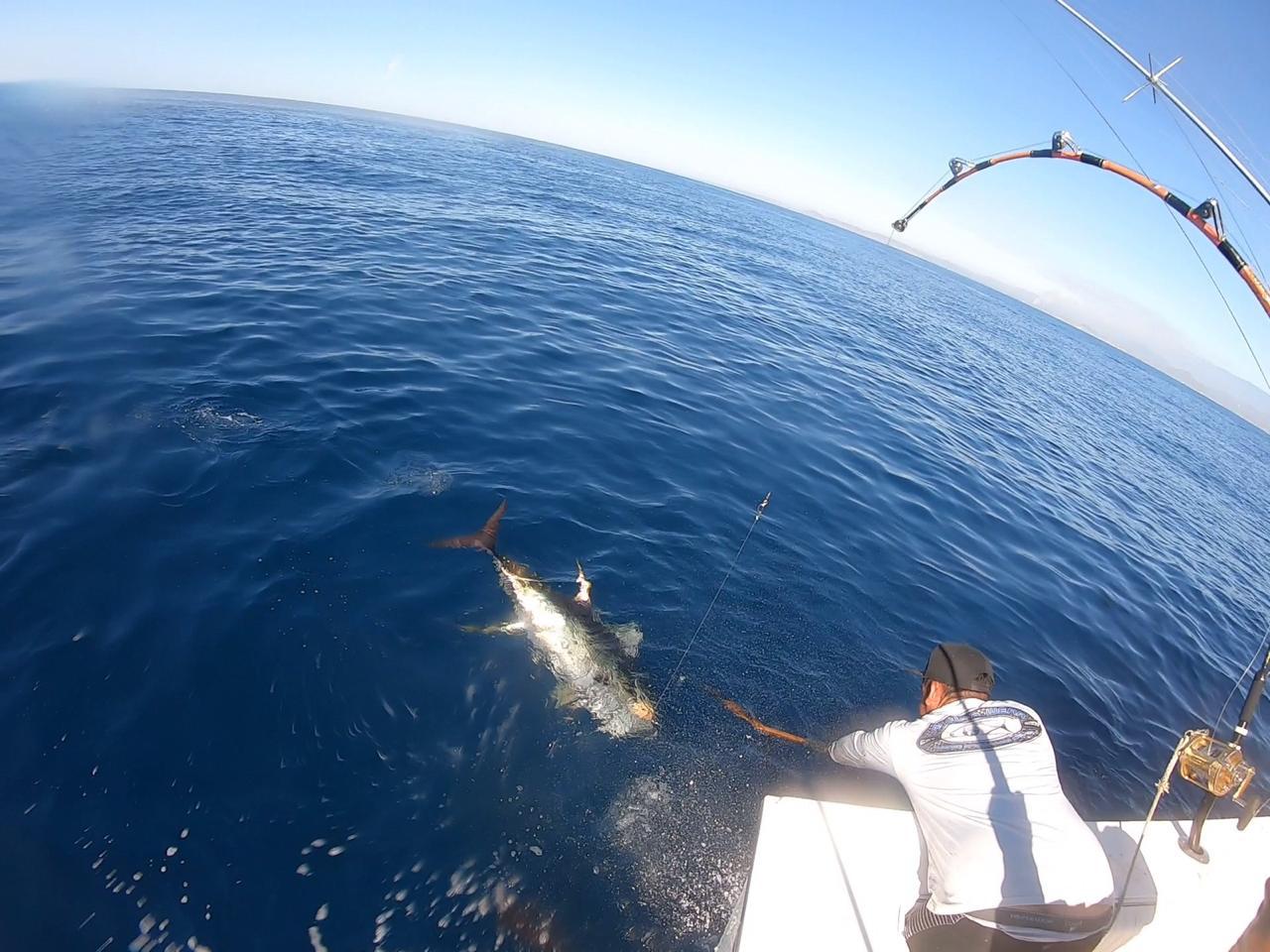 The yellowfin tuna this week were also found closer to shore (not all catches, but quite a few notable ones). In various occasions the crews were surprised to find schools of porpoise only 1 to 3 miles offshore, accompanied by enough tuna to limit up in an hour. Pisces 38′ C Rod, did just this, and ended up with two 150 -180 lbs tuna on board after a feeding frenzy broke loose.. Pisces 31′ Ruthless   was fishing alongside C Rod this day, and even ended up free-gaffing three fish!

See video of this day aboardPisces 38′ C Rod below!

Pisces 37′ Viking BBII  also surprised at the dock, when anglers Mike Kott and Gary Bailey weighed in a 215 pound Yellowfin. The fish hit on the yummy flyer about 30 miles South of Cabo at the 210 Spot. They also caught another 4 tuna there and 3 dorado around 20 lbs! Tuna catches for the fleet totaled 224 fish, respecting catch limits. 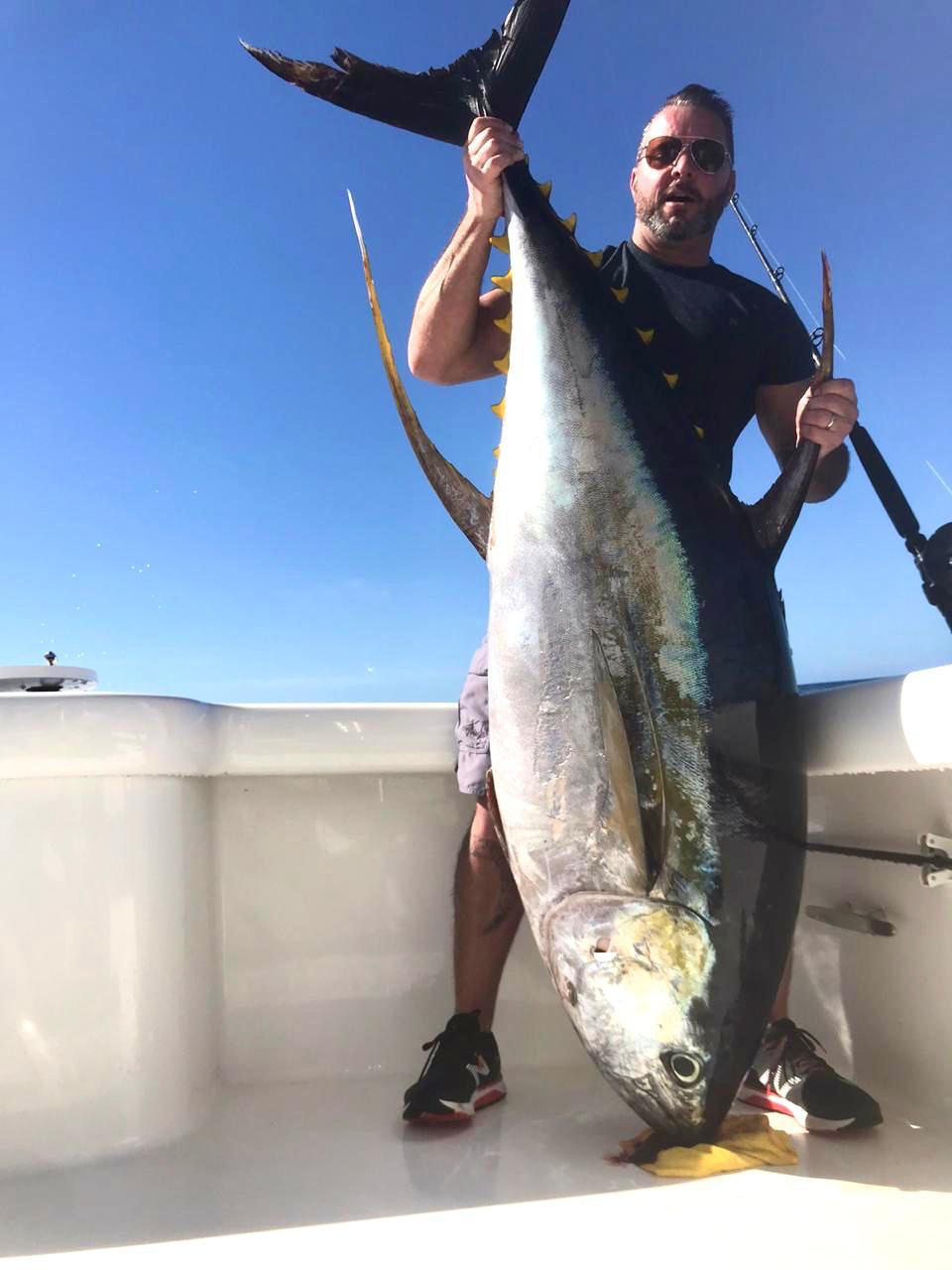 Billfish were very slow this week, which is a-typical of the season, but actually not surprising since we haven’t even seen the Striped Marlin fishery start up at the Finger banks yet. The few Striped marlin caught and released this week, were all on the Sea of Cortez side, between Cabo Real and Palmilla areas.

Other catches this week included several wahoo, sierra mackerel and some nice roosterfish. All these were caught on Pacific side as well, and all roosterfish were successfully released – taking live bait mostly.

Some of the highlights of the week are here (we wish we could share them all!). Starting with the impressive dorado numbers, we had some boats catch up to 18 dorado each. Pisces 31′ Ruthless was top dorado boat, with 18 total, 8 released after finding a big school. All weighed about 15 to 20 lbs and hit on live and dead bait, between Gaspareno and La Ballena areas. 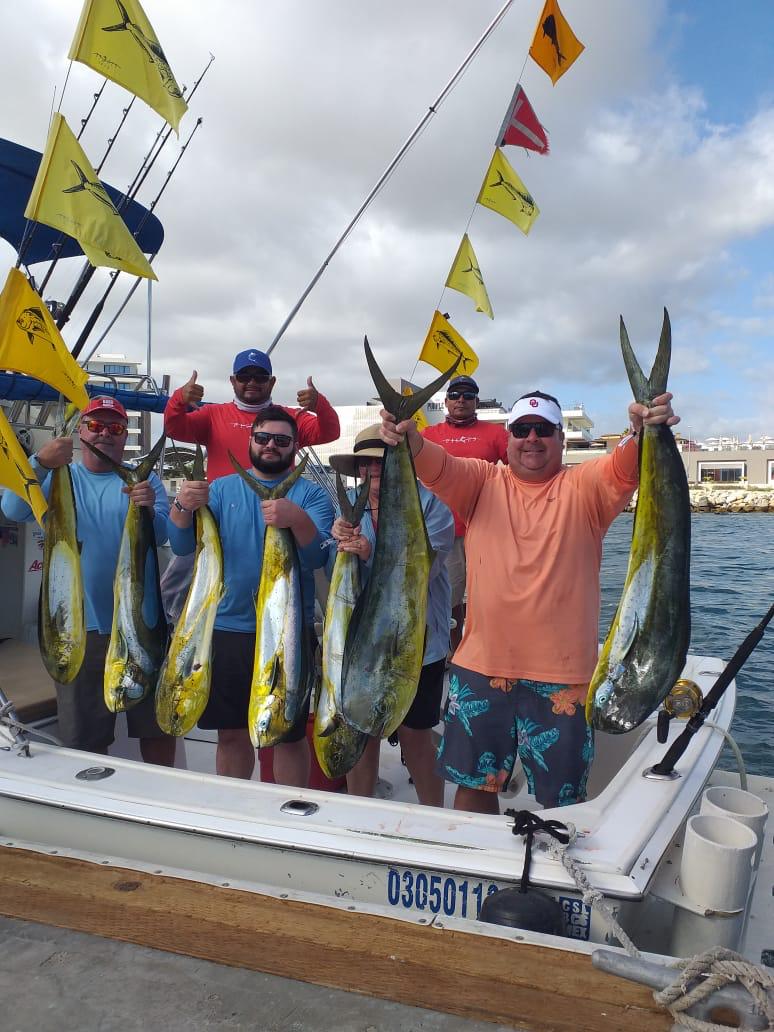 The next day, Pisces 31′ Ruthless  had an even better day, reaching limits on yellowfin (10) for angler Matthew Curley and friend from Fort Wayne, Indiana, by 10 am! Not only this, but they also landed 12 dorado, releasing 8, which hit on live bait and feathers at Cerritos. As if that wasn’t enough, after catching all these for two anglers way before midday, they tried for small game, and released a roosterfish of about 15 pounds. Then, another 5 needlefish released at Pozo Cota. 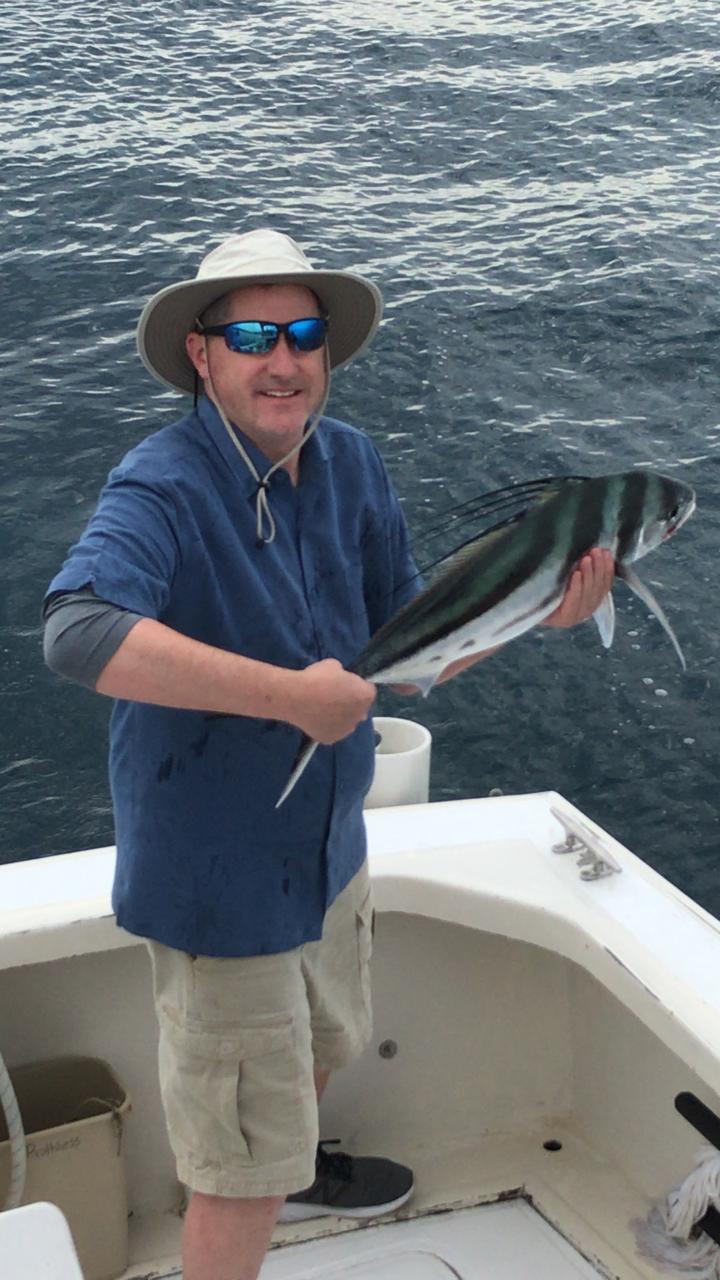 Big dorado numbers coming from Pisces 60′ Reel Machine   as well, with 16 caught in one day, weighing approx 10 to 15 pounds each and hitting on lures and dead bait on the Sea of Cortez side, close to Palmilla.  Later in the week they caught 6 dorado close to Las Margaritas, as well as a nice Sierra Mackerel of about 10 pounds! To top if off a small wahoo that hit on red/black lure at Golden Gate, al for anglers from Utah.

More sierra for Pisces 31′ La Brisa  and angler Derek Leichliter, who caught 4 sierras on live and dead bait and hoochis at Los Arcos. Plus 5 dorado of about 10 to 20 lbs on dead mackerel bait. 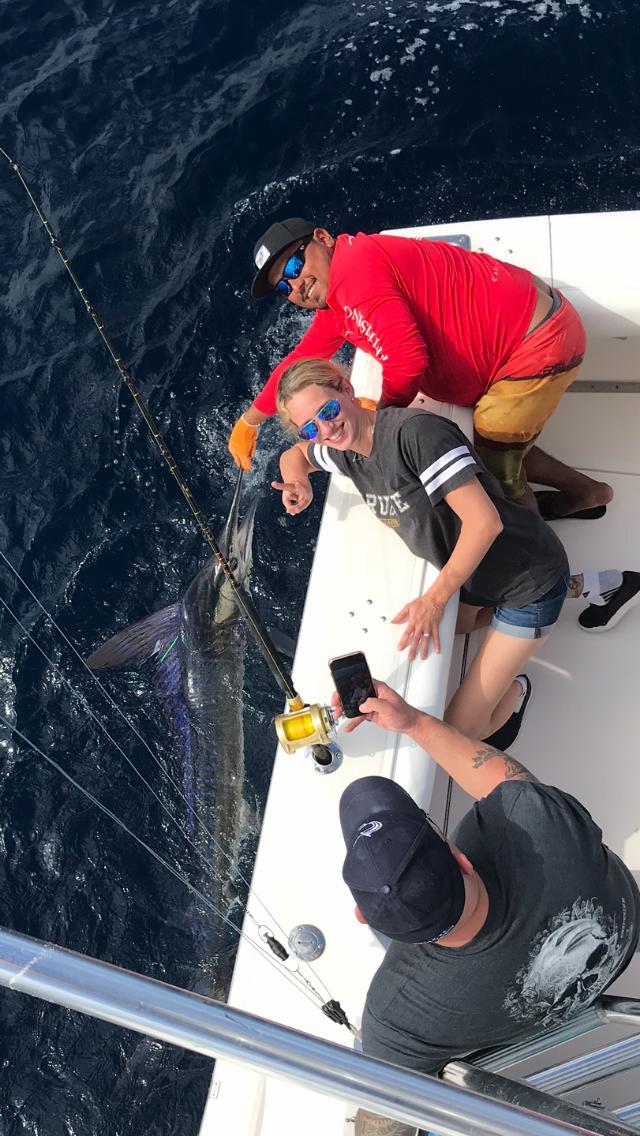 For Marlin we saw Pisces 32′ Bill Collector   released 3 of about 130 to 150 lbs each. These hit on dead mackerel close to Palmilla area. Four Dorado between 10 and 20 lbs caught there too, by anglers Harry Gallison, Kevin Ball and Tom Stanek from South Carolina. On another day, anglers from Montana released 1 striped marlin of about 110 lbs, which hit on a green/black lure at Gaspareno. Then another 3 dorado and 9 yellowfin of up to 40 lbs.

Pisces 40′ Chasin’ Tail also found some marlin, this time  outside of Cerro Colorado. All fish ranged from 100 to 130 lbs and hit on dead mackerel bait. Then an approx 20 lbs wahoo for the Hafer and Iffergan families from TX. 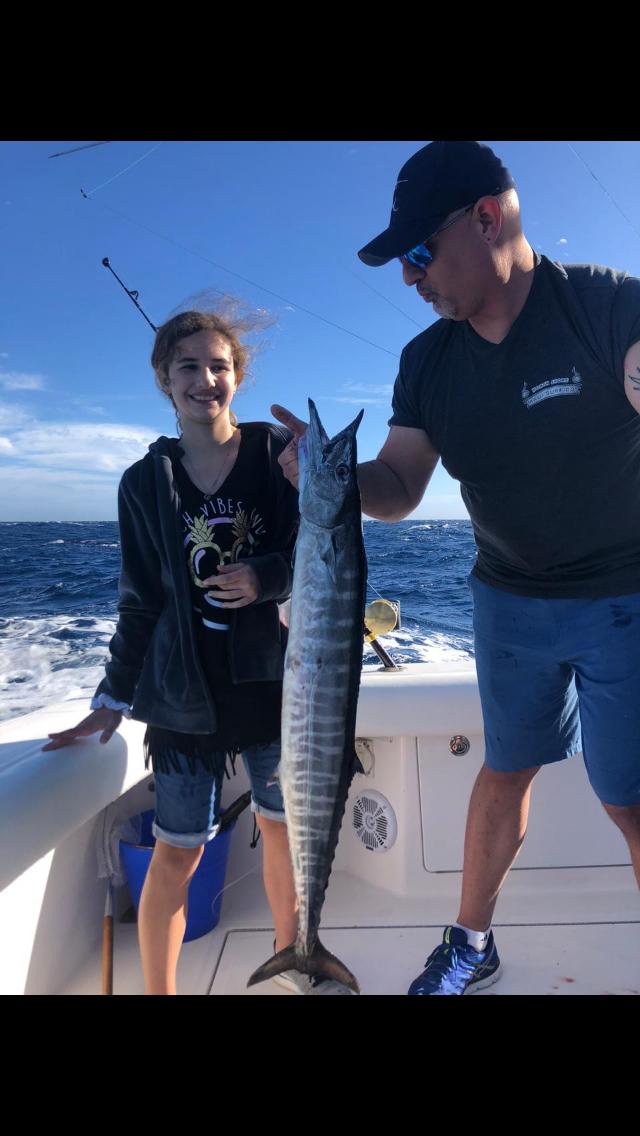 LOCATION: All locations from Old Lighthouse To Migrino; Golden Gate.