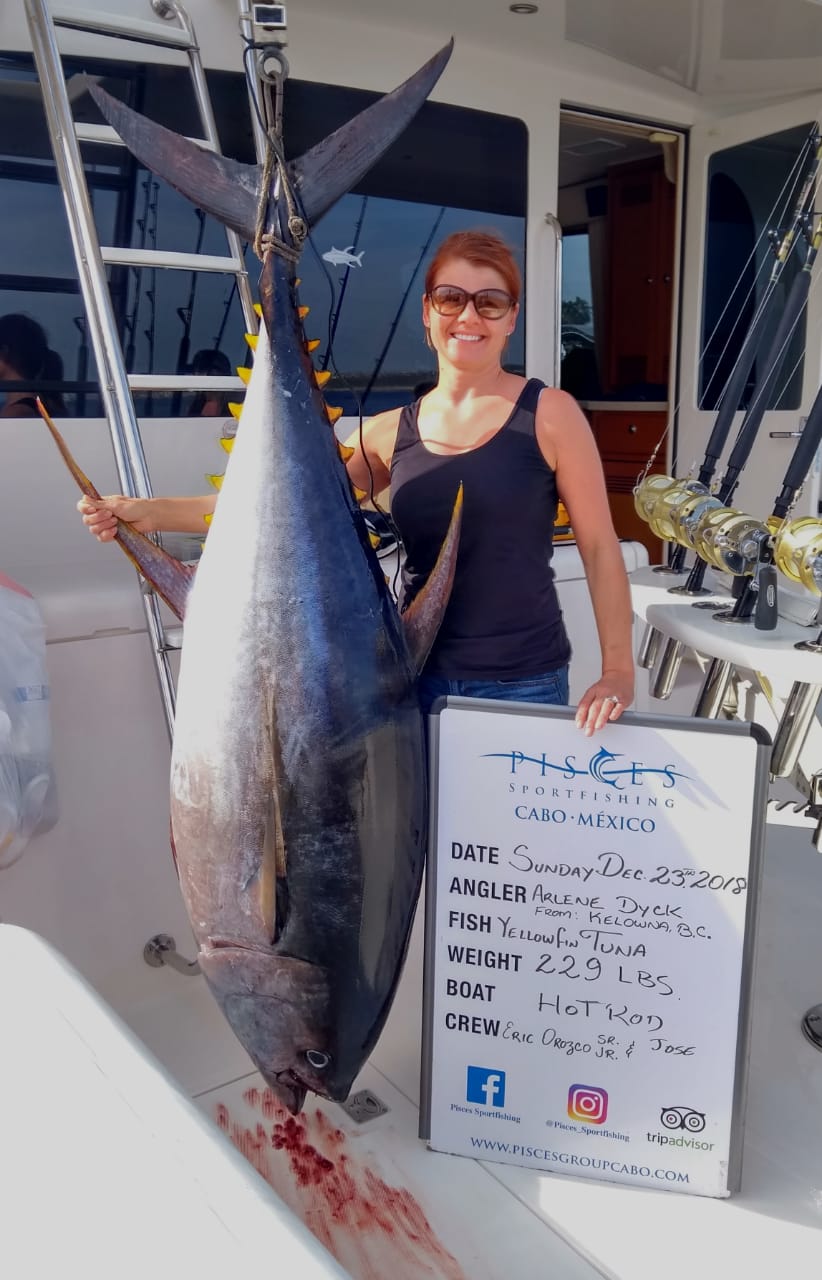 Overall catch success rate, all species combined: 98%
Numbers at a glance: Billfish 67%, Tuna 52%, Dorado 7%, other 5%.
More Striped Marlin and Yellowfin tuna this week along with the seemingly never-ending Finger Bank action! Plus an estimated 500 lbs Blue Marlin released aboard Pisces 31′ Rebecca and some fun small game, which included grouper, sierra, pompano and triggerfish. Dorado numbers have gone down quite a bit, but still around for those looking hard to find them. Also, as I write this report today, again a big yellowfin hits he dock. Angler Arlene Deck, from Kelowna, British Columbia caught the monster tuna, 229lbs, on Pisces 42′ Hot Rod!
Anglers Brian, Katie, Melissa, and Nancy Kura aboard Pisces 31′ Rebecca were so excited on their first blue marlin release that they didn’t even take a picture. They reveled in the moment; with Ms. Kura doing a great job at fighting the fish for about and hour and a half before it was brought to the boat and safely released. Captain Jose Ramon Alucano and Mate Luis Cota put the fish at about 500 lbs (approx). The marlin hit on a flying fish lure (white/blue) out of San Jaime,  where they had also released a small 60 lbs striped marlin on mackerel bait. And as if this wasn’t enough, they also landed 5 nice tunas for dinner, all between 10 and 20 lbs, which hit on cedar plugs and feather lures.
We had several boats head up to the Finger bank this week again, also with raving reviews. Double digits of striped marlin on the line, with our top release boat in one day, the Pisces 31′ Tracy Ann releasing 29 striped marlin by Cabo locals and anglers from Laguna Beach, CA. 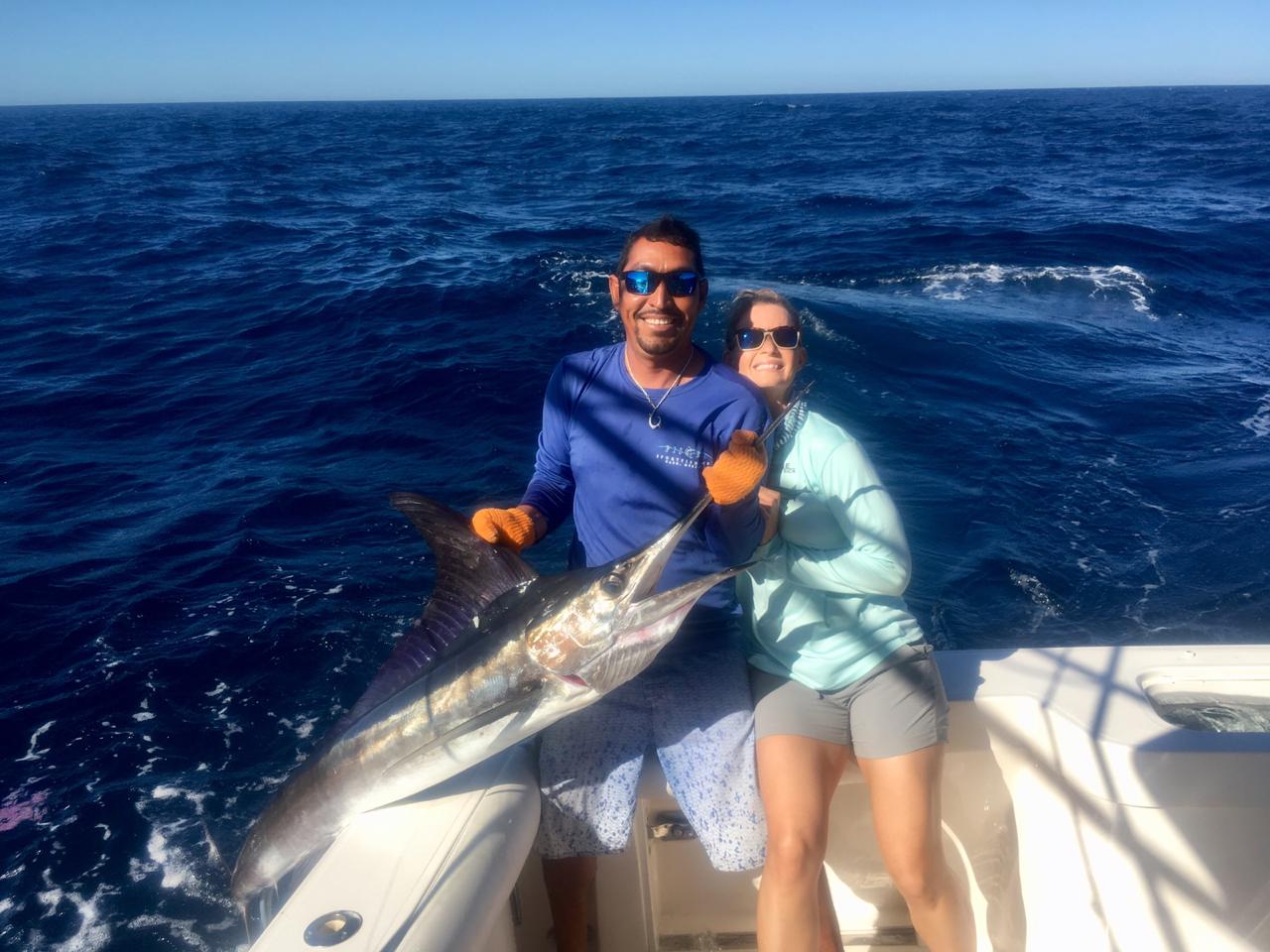 Striped marlin released aboard Pisces 42′ Caliente
Again, Pisces 31′ Ruthless impressed with a total of 66 striped Marlin released at the Finger this week. With Canadian anglers Kyle Mlxon and Tamara Elwaypps from Ontario, having a spectacular day and releasing 24 striped marlin up to 180 lbs each approx, as well as scoring a bait ball swim with the Stripeys. Tamara said to dock-masters that it was just an absolutely spectacular experience with 4 marlin on the line in every moment. Wildlife included bait balls, marlin everywhere, sea lions, dolphin, turtles. Don Switzer and Ed Wyant has a similarly spectacular day on the Ruthless later in the week, catching 19 and releasing 18 striped marlin from 90 to 150 lbs each approx using mackerel bait as well.
December 16th, Ruthless caught and released 15 striped marlin at the Finger on live mackerel bait for anglers Eugene and Michael Haines who also caught 10 yellowfin tuna of about 10 to 20 lbs each on cedar plug lures. 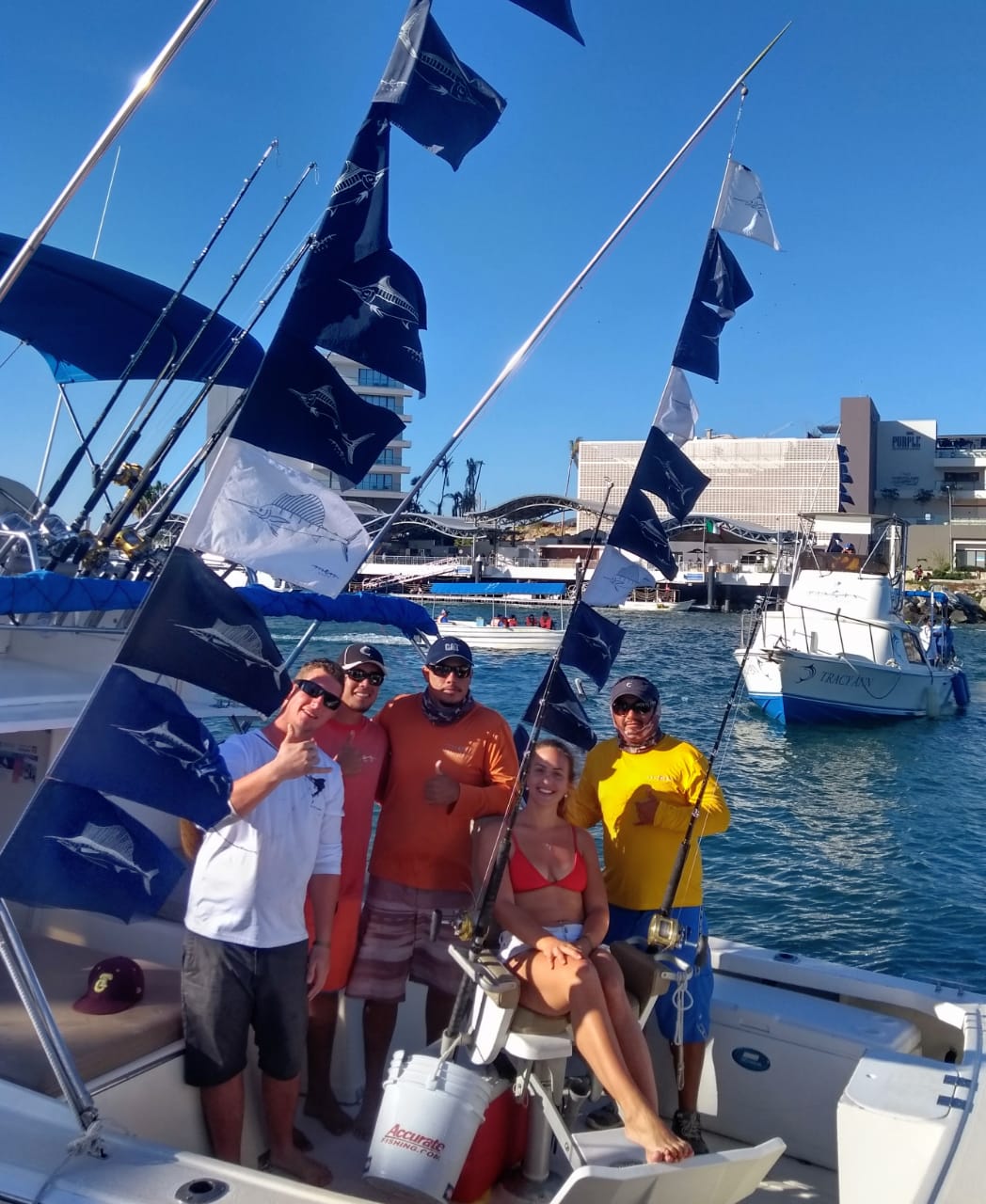 24 Striped marlin released on Pisces 31′ Ruthless for Tamara and Kyle!
December 20th was a great day at the Finger for our fleet, with most of our 31s heading up there and releasing double digits of marlin. Pisces 31′ Rebecca released 16 stripeys as well as landing 4 tuna (just before arriving at the Finger itself), Tracy Ann released 15 stripes and 32′ Bill Collector released 18 stripeys with the largest of about 200 lbs approx. All marlin were caught on live mackerel bait. But the marlin action wasn’t only at the Finger, as Pisces 31′ Tiburon stayed closer to home and caught and released 4 striped marlin at Golden Gate with anglers Douglas Schafer, Michael Popov and Toki Schafer on board. Live mackerel bait was used along with guacamayo lures, and marlin were between 100 and 120 lbs each. Anglers the Yates family and friends form Dayton, Texas, also fished with the Tiburon earlier in the week and did well to catch and release 3 striped marlin between 80 and 100 lbs each on mackerel bait and guacamayo lure close to San Jamie area. They also caught 2 dorado on mackerel and cedar plug lures, weighing about 10 and 12 lbs each.
December 21st Rebecca headed to the Finger again, this time with anglers Nicholas and Dan Raff, catching and releasing 18 striped marlin between 90 and 120 lbs each. Pisces 38′ C Rod had some great fishing with 9 striped marlin caught and 8 released at the Finger this week; all marlin weighing approximately between 80 and 150 lbs each. They used live mackerel bait and managed to land 3 yellowfin tuna as well, of about 15 lbs each on cedar plugs and feathers just before the Finger Bank. Anglers were Nancy Lundin and Scott Reddam from Ontario, Canada.The previous day, Pisces 38′ C Rod also fished for marlin closer to home, releasing 4 striped marlin on mackerel bait at the Old Lighthouse. Anglers were the Sime family from Alberta, Canada, including young Hailey, 9 years old, and Rachel, 6 years. 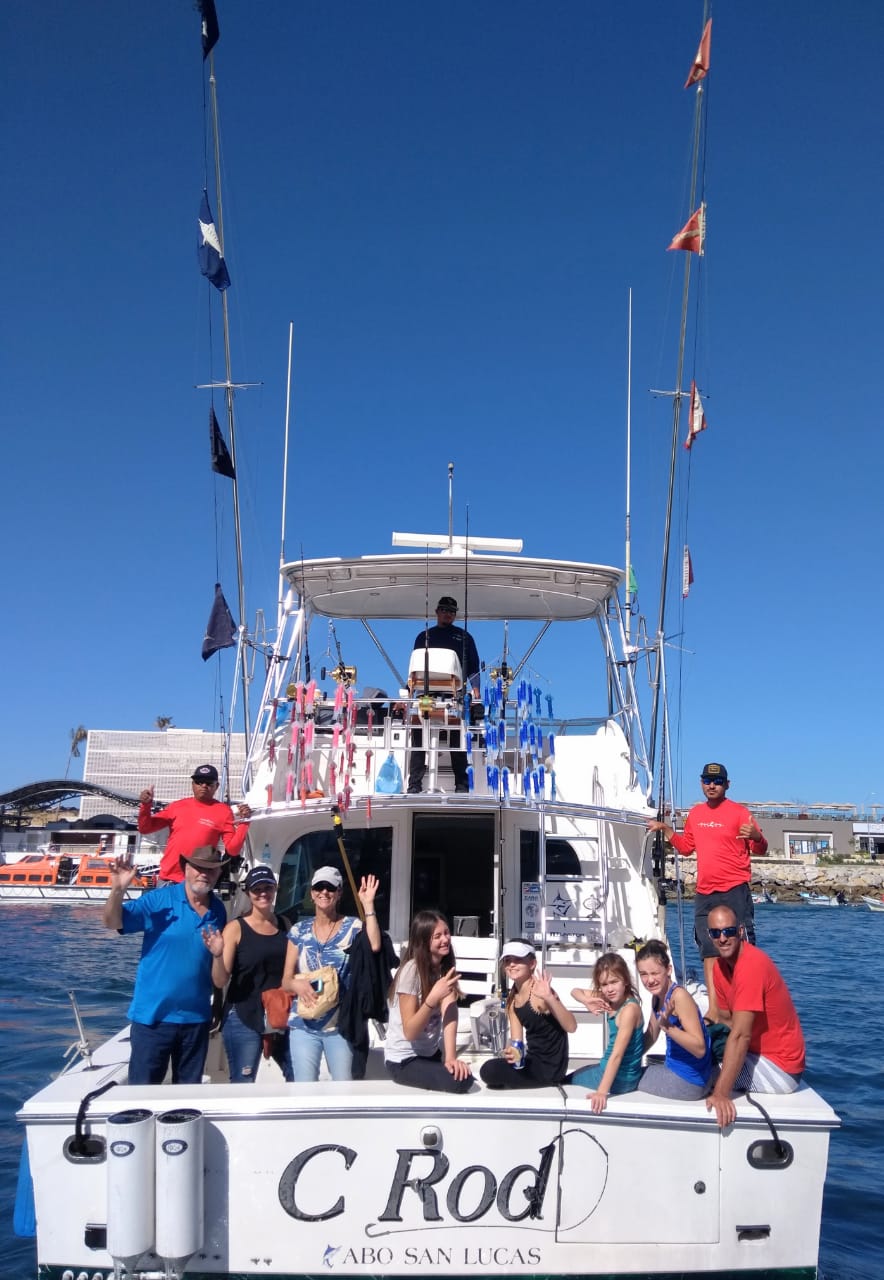 The Sime family from Canada shows off 4 striped marlin released flags on Pisces 38′ C Rod
Pisces31‘ Tracy Ann released two small striped marlin between 70 and 110 lbs, which hit on a green/yellow lure and on mackerel bait just before Punta Lobos, with Captain Bruce Montano at the helm tis day. They also landed 5 dorados, of about 10 lbs each around Cerritos area on cedar plugs.
Pisces 35′ Valerie managed to release a small striped marlin, of about 40 lbs a bit closer to home, fishing La Ballena area. The small stripey hit on a hoochi lure and anglers George Green, Michael Freedman and Robert Gorlin also landed 20 football-sized yellowfin tuna on cedar plugs there. 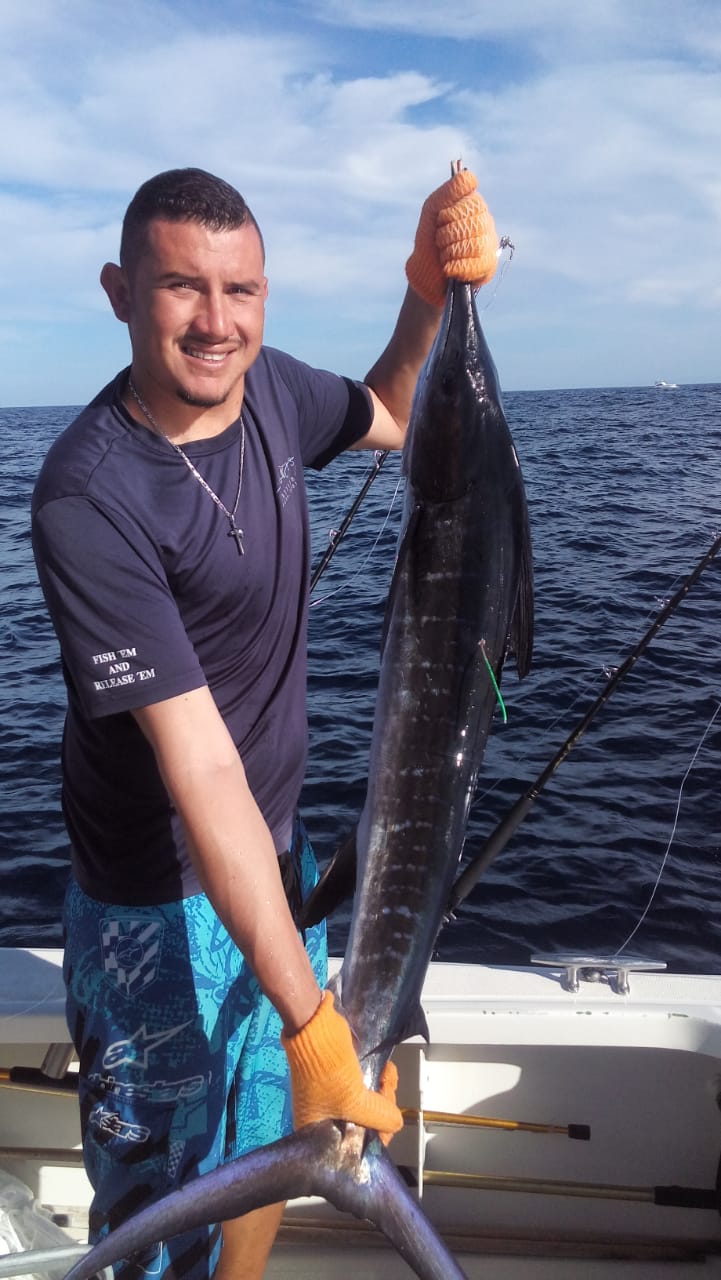 Pisces 32′ Bill Collector released 3 striped marlin on mackerel and guacamayo lures at the 260 Spot for anglers Ken and Lisa Sacks who also landed a nice 20 lbs yellowfin on cedar plus lure.

After some nice tuna fishing and a couple of stripeys caught on Bill Collector in the previous week, Judd Toepperweinac and Karla Miller, from Texas, decided to target some small game fish specifically. They had a fun day of sierra, grouper, pompano and triggerfish, with 2 sierra of about 4 lbs hitting on the shoreline close to the Golden Gate area and 2 small grouper and 1 pompano, plus 3 triggerfish total. 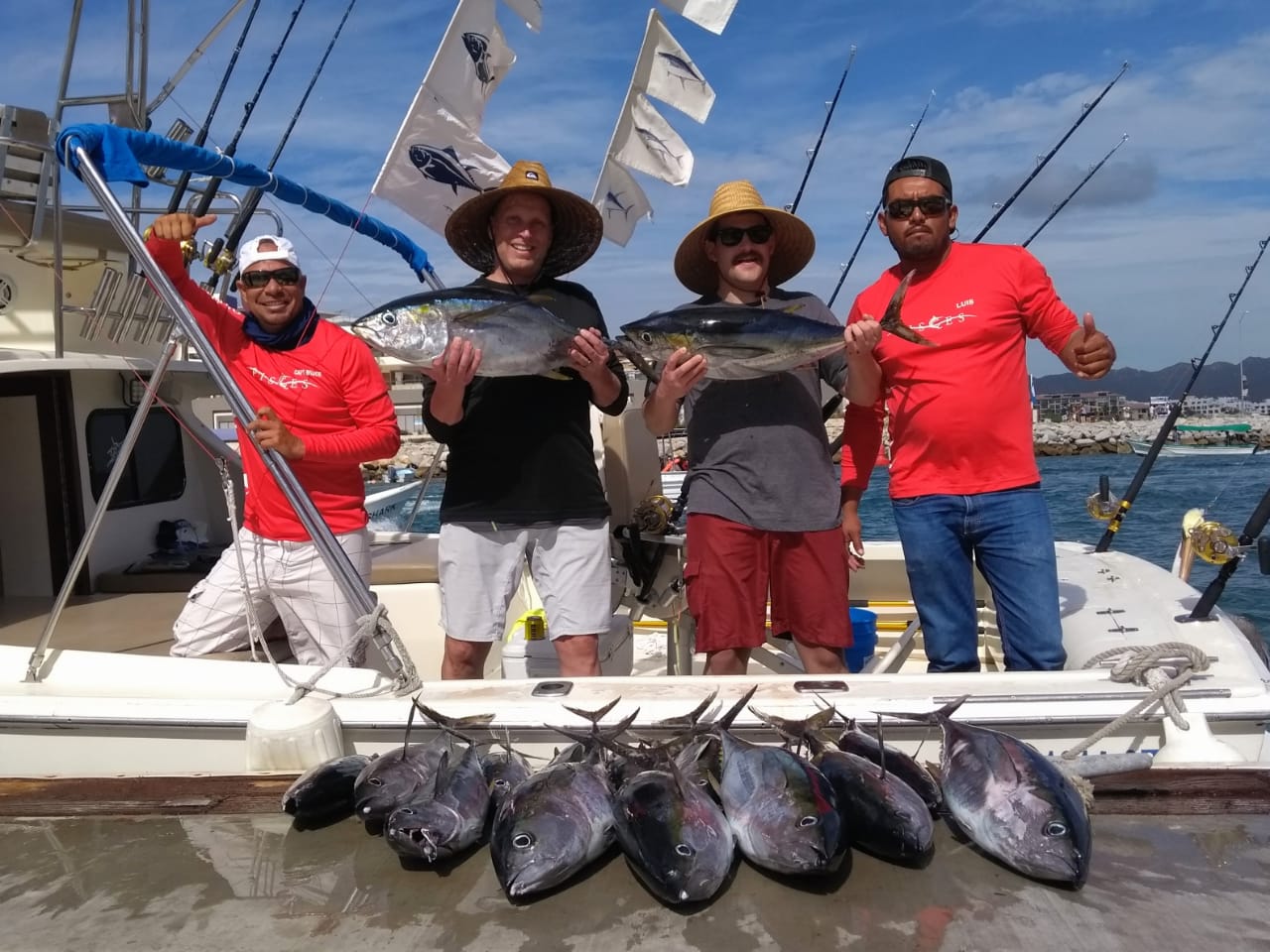 Tuna time aboard Pisces 31′ Rebecca with Captain Bruce Montano at the helm this day.