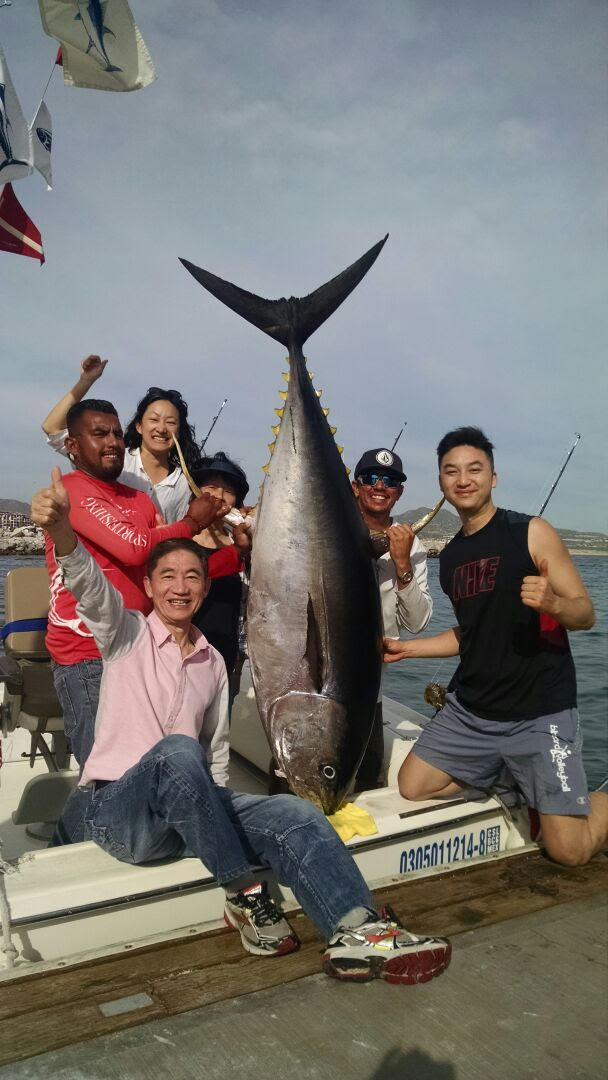 Fishing was a little slower this week, but again, I think the weather influenced this a bit. However, all those boats that did catch fish caught in decent amounts and sizes! We saw many tuna per boat this week, and again, two BIG tuna hit our docks, one of around 278 lbs and another of about 150 lbs in size caught aboard the Pisces Andrea! We also had one of our last blue marlin to be caught this year. Although not many small game fish were caught, these included roosterfish, wahoo and jack crevelle mainly.

The big tuna caught this week were by father-son anglers, Jeff and his son Cayden, 15 years old, and Mathew McEntire and his son Tyler, 9 years old,  aboard our 28ft Pisces Andrea with Captain Orlando and mate Silvestre on December 18th.  They did an awesome job at fighting and landing not only two monster tunas of 278 lbs and 150 lbs, but another 15 very nicely sized tunas, ranging in weight from 20 to 40 lbs each. They even had time to catch and release a striped marlin of about 100 lbs out at San Jaime. The tuna took lures: tiger striped, green and yellow; while the marlin hit on a cedar plug.

La Brisa and anglers Eric Peterson and Michael Kertzman had a nice day for marlin when they caught and released two striped marlin on mackerel bait out at the 220 Spot, as well as landing nine yellowfin tuna between 10 and 30 lbs each, on feather lures.

This same day, the Pisces Rebecca captained by Jose Ramon Alucano caught 18 dorado all about 8 miles from the 210 Spot on mackerel bait. They also landed 14 yellowfin tuna on feather lures at this same location. They released five dorado. Anglers were Ben and Tom Howayeck and David and William Burke from CA.

More tuna caught aboard Pisces Ruthless the next day, with 20 tuna caught total by anglers the Stoike and Kura families from North Carolina. They landed the fish about 35 miles out from the 240 Spot on feather lures and cedar plugs.

And for what looks like it could be the last blue marlin caught by our boats in 2017, the 61ft Pisces Tag Team and anglers Matt and Rebecca from Connecticut, caught and released a nice 280 pounder. They landed the fish about 11 miles out from the Old Lighthouse on a green/yellow lure.

As for other small game fish caught, we had the Pisces Tiburon and anglers from Washington catch one wahoo of about 20 lbs on feather lures our at Golden Gate. They also caught an released a 100 lbs marlin there, which hit on mackerel bait. On December 20th, they also found some of the only rooster fish caught this week, this time with the Findlay family from Tennessee as anglers. They caught these two 12 lbs roosters, which they released, out at Migrino on mackerel bait.

A total of 417 fish caught by Pisces boats this week, with 31 being marlin, 247 being tuna and 76 dorado. All catch limits well respected.

WEATHER CONDITIONS: Overcast mainly, with some wind at the end of the week, mostly calm seas but some chop in water on Friday of the week.