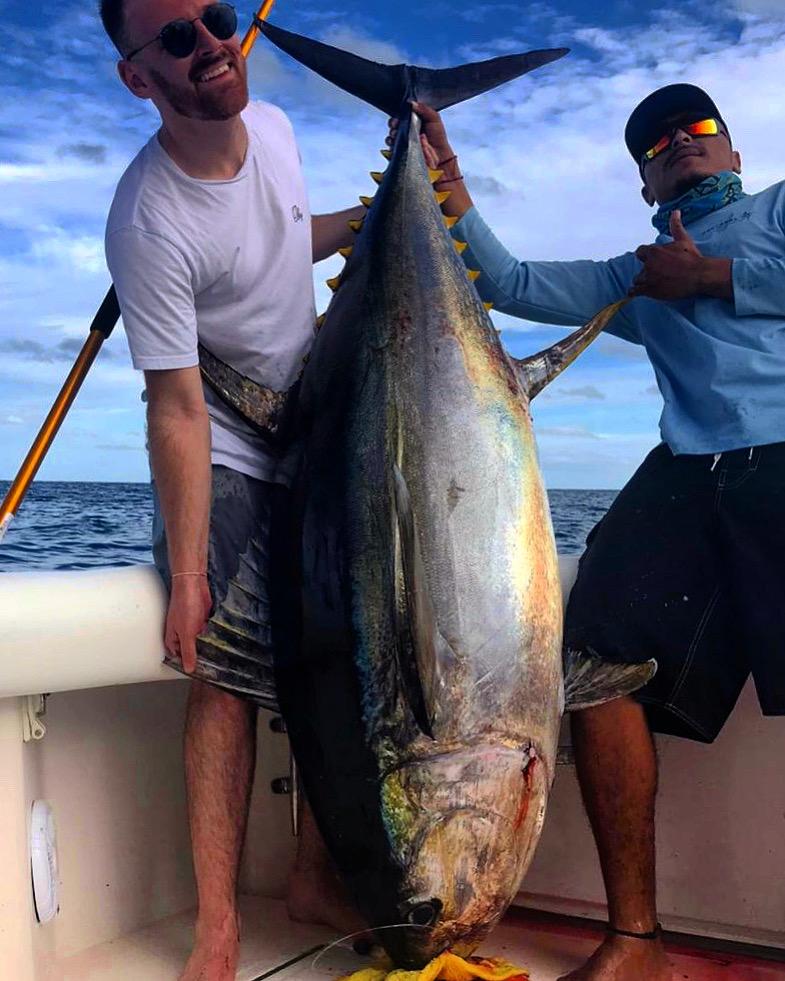 Again, an impressive week of fishing in Cabo! Eighty-three out of eighty-six boats caught fish, making for 97% catch success rate of all species combined. Largest numbers of fish caught were once again Dorado, with a staggering 394 caught (many of those released, respecting catch limits). For Tuna there were 148 caught by all boats, including an impressive 238 lbs Yellowfin aboard Pisces 40′ Chasin Tail. Marlin were up from last week, where around 10% of boats caught them, to 35% this week. Total Marlin catches were of 48 fish, all released, which included a 200 lbs Blue Marlin on Pisces 31′ Rebecca. Other species caught included Sierra Mackerel, Wahoo and a few Roosterfish. 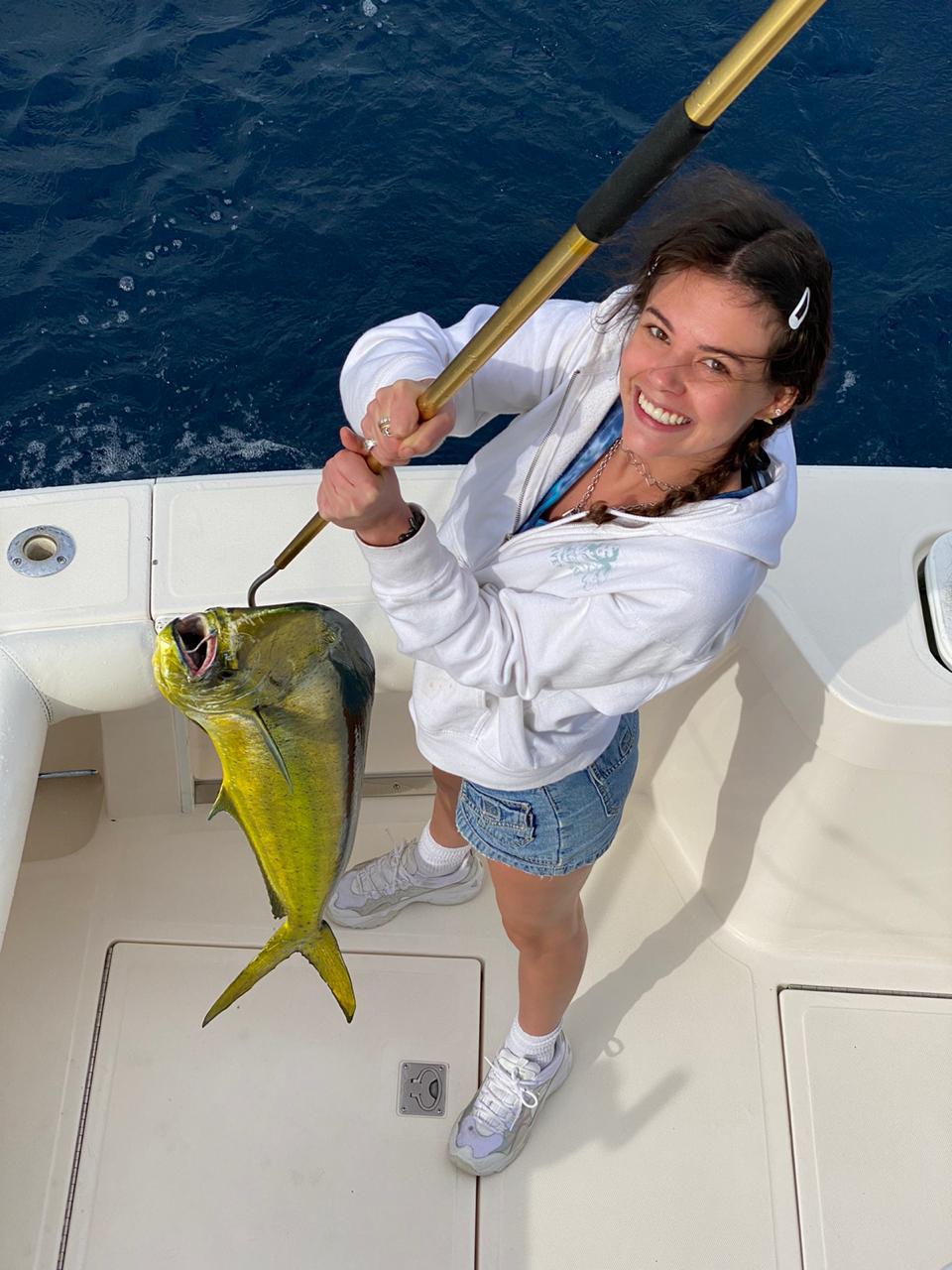 Today we’ll start off with the biggest catch of the week, the 238lbs Yellowfin caught aboard Pisces 40′ Chasin Tail We talked to Captain Pepe de La Pena about it:

“This Yellowfin exploded onto the yummy flyer! It leaped at least 8 feet out of the water after it. We were fishing Punta Gorda and had already tagged and released a nice Striped Marlin and landed 3 Dorado when we decided to look for some Tuna. We left that area and in about 45 mins found a pod of dolphins. We set up the kite and this one was our first bite.” It took angler Brian Anderson about 1.5 hours to land it on 100 lbs Spectra line.

On another day Pisces 40′ Chasin Tail did well again with 2 nice Tuna, the largest of about 45 lbs, which again hit on the kite and on cedar plug lure. This time they found them about 15 miles South of the Old Lighthouse. They also landed 4 Dorado between 15 and 20 lbs each on mackerel bait. Anglers were the Vaden family from Fort Worth, TX. 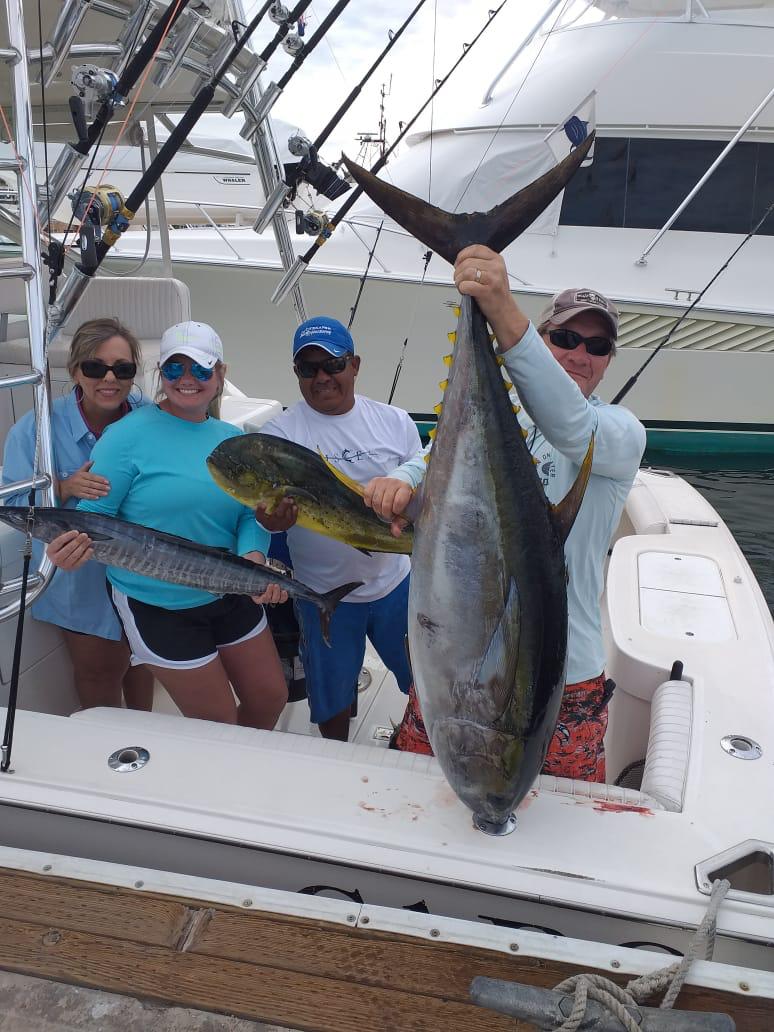 Pisces 32′ Bill Collector also did incredibly well with tuna this week. December 27th Anglers Allen, Nicole and Teresa Dutt did well to catch 14 Yellowfin, with the largest just shy of 100 lbs. The tuna hit on varied feathers and cedar plug lures at Golden Gate. They also found 2 Dorado there, of about 15-20 lbs which hit on live mackerel. And to top it off, a nice wahoo of about 20 lbs on lure there as well.

Pisces 30′ Karina also had some great fishing. Anglers aboard, the Lucero Family from Colorado, caught 20 Yellowfin all on feathers and cedar plugs at Golden Gate. They also caught 2 Dorado (releasing one) of about 15/20 lbs each. On another day Pisces 30′ Karina did well to land 3 Yellowfin outside of Los Arcos on cedar plugs, and then find a Striped Marlin of about 160 lbs, which hit on mackerel at Las Margaritas. Plus 5 Dorado of about 15 to 20 lbs each there as well. And, to end the day they kept a nice Wahoo of about 40 lbs! The wahoo hit on a white/blue lure out of La Antena for anglers Nick Simpson, Tim Angell and William Hamilton from CA. 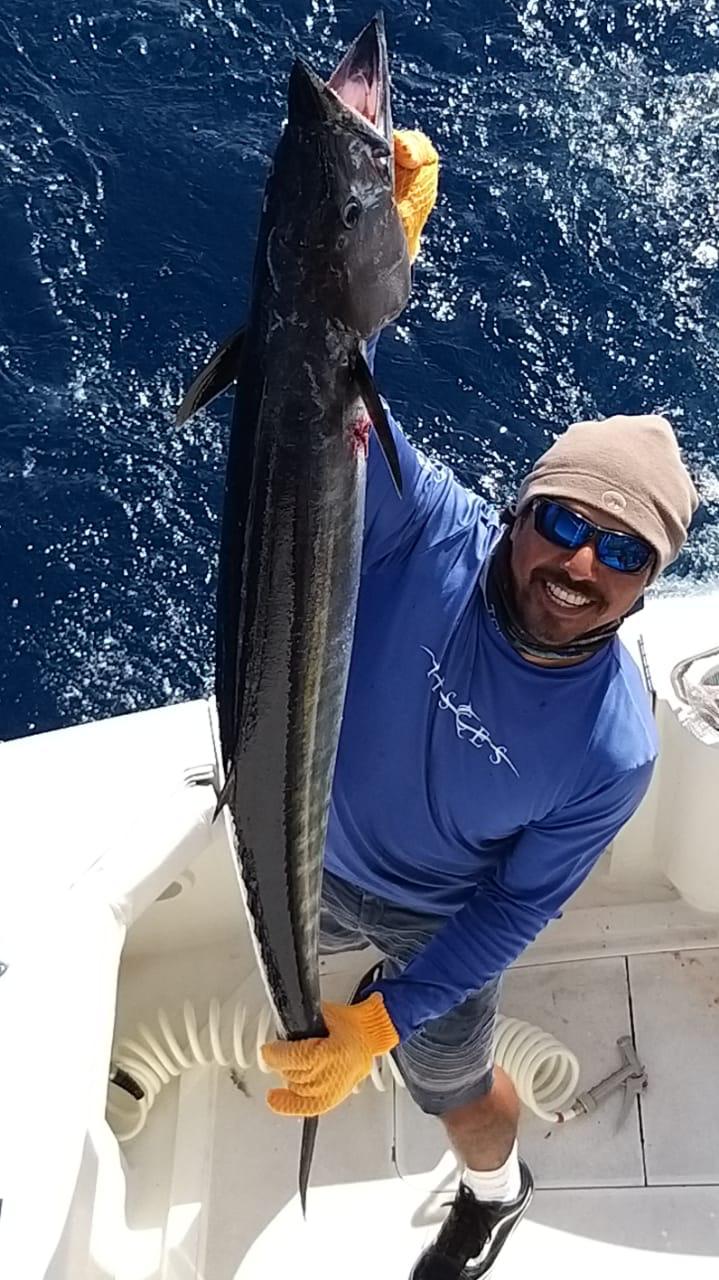 And how about catching limits of Dorado in less than 2 hours?! Pisces 30′ Karina did just this with the Hoover family aboard, from CA. They departed the dock at 7 AM and were back by 930 with 9 dorado caught (1 released), all weighing around 20 to 30 lbs each! Captain Orlando found them at Cerros de Arena on casted live bait.

More dorado caught for Pisces 38′ Speedwell, one of our best Dorado boats this week with a total of 14 caught in one day (6 released). All fish ranged from about 12 to 25 lbs and hit on live and dead bait at Las Margaritas. They also caught 2 Yellowfin of about 15 lbs on feathers and cedar plugs at Pozo Cota.

Pisces 42′ Caliente was one of the few boats to head up to the Finger Bank this week,,looking for that striped marlin bite we’ve been waiting on.. They did release 2 Striped Marlin and another 10 dorado (all fish on ballyhoo), but looks like we have to wait a little longer for the Bank to turn ON.

Actually, Pisces 35′ Bill Collector 2 which headed to the 11:50 Spot that same day did even better, with 5 Striped Marlin released between 120 and 150 lbs each (hitting on ballyhoo). They caught 7 Dorado and released 3, respecting catch limits for 2 anglers aboard Chelsea and Richard Gorman. The Dorado hit on varied lures and ballyhoo bait. 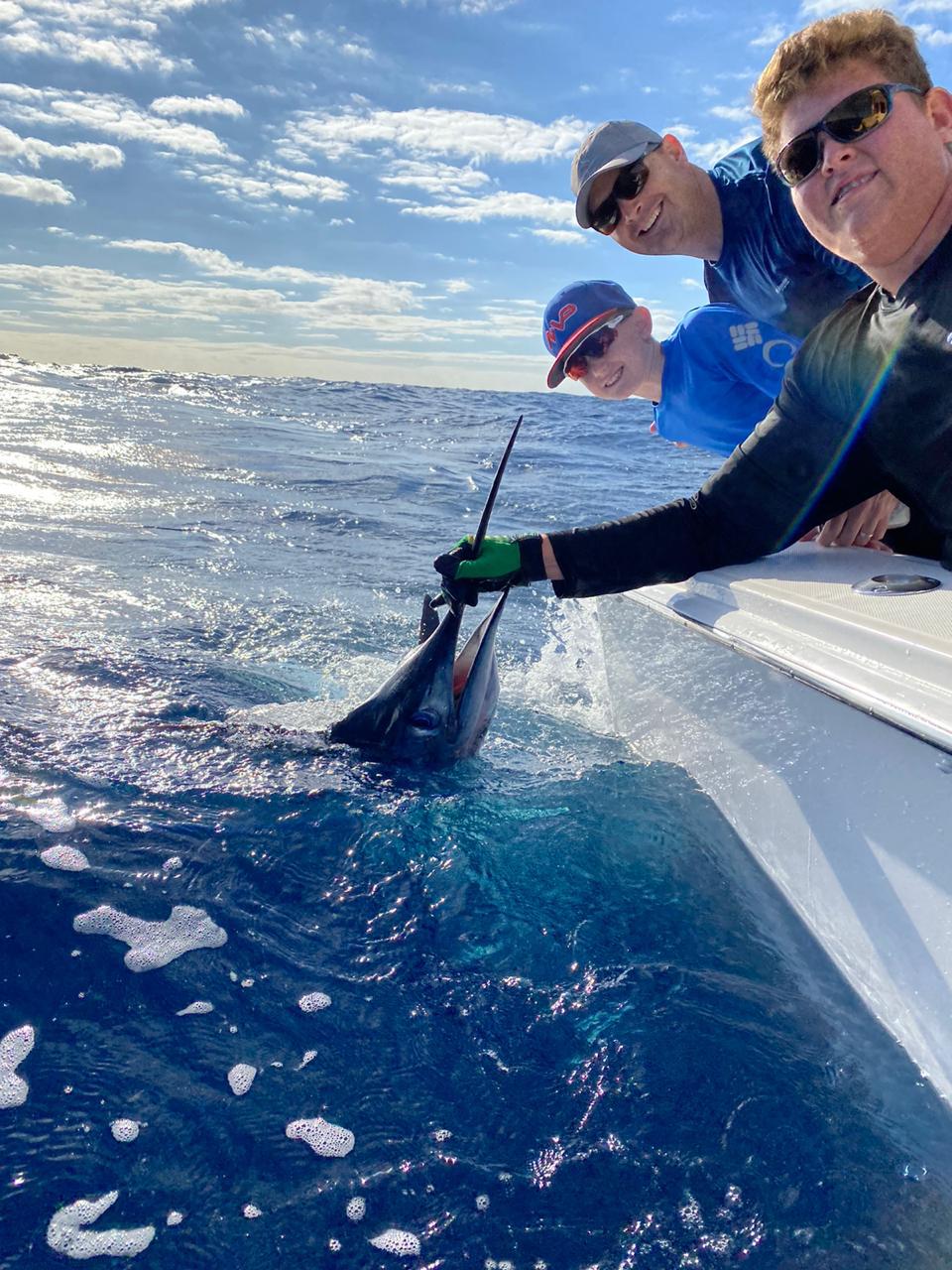 Pisces 37′ Viking BBII headed up just before Chawita area and released 3 Striped Marlin, about 100 – 130 lbs each, on ballyhoo. Then 7 Dorado caught between 15 and 30 lbs each on ballyhoo as well for anglers from New Jersey.

The Blue marlin, of about 200 lbs caught on Pisces 31′ Rebecca hit on dead mackerel bait out of Cabeza Ballena area on the Cortes side. Anglers the Jankovsky’s from Denver also caught 4 Dorado close to El Tule on live bait. 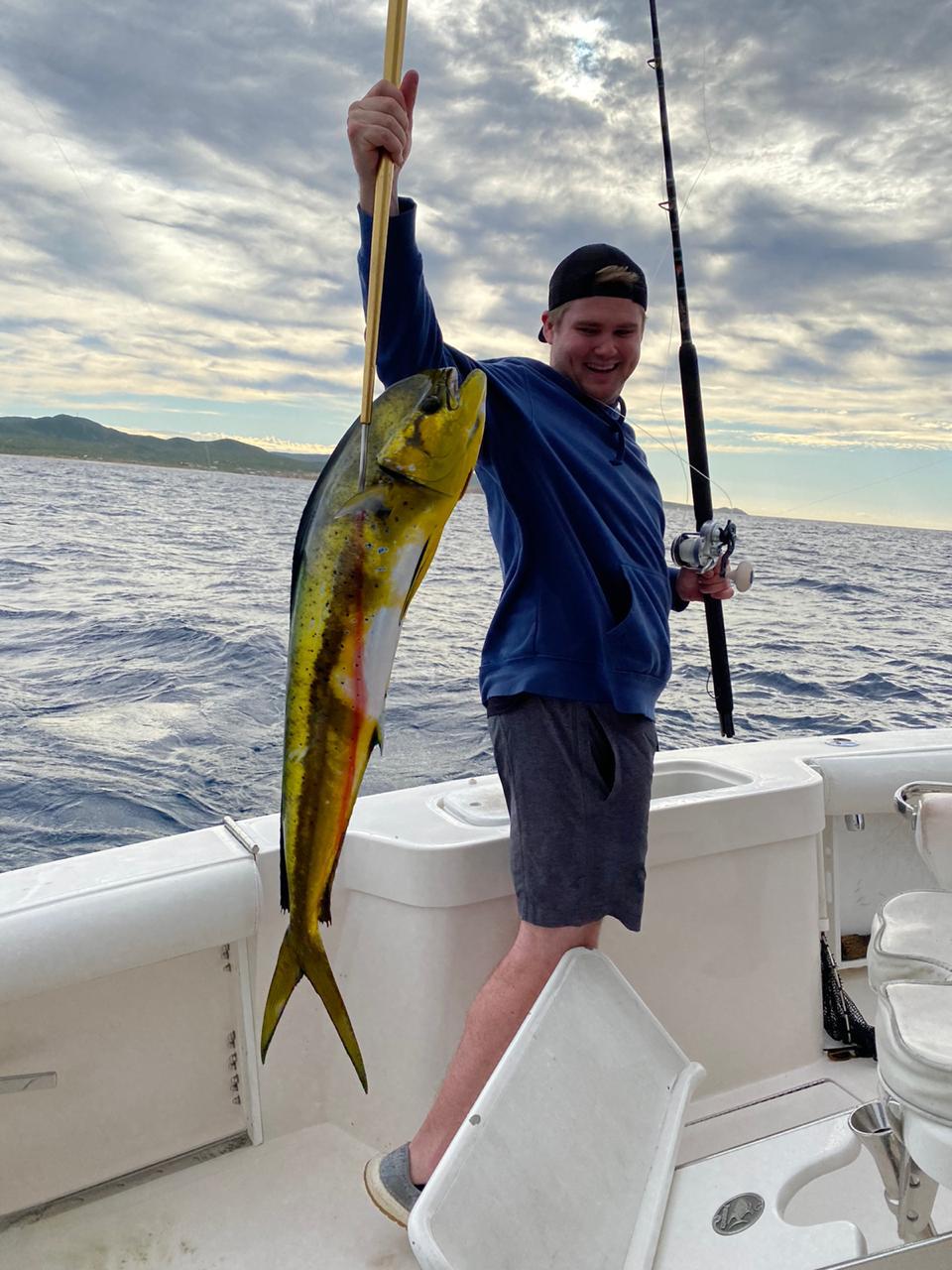 Pisces 31′ Tiburon caught 1 Striped Marlin of about 120 lbs, 5 Dorado of about 15 lbs and 10 Yellowfin all outside of Gasparen. Then on another day landed 8 Dorado more and 4 Sierra Mackerel on hoochies at Migrino.

LOCATION: Several locations on Pacific side for Dorado