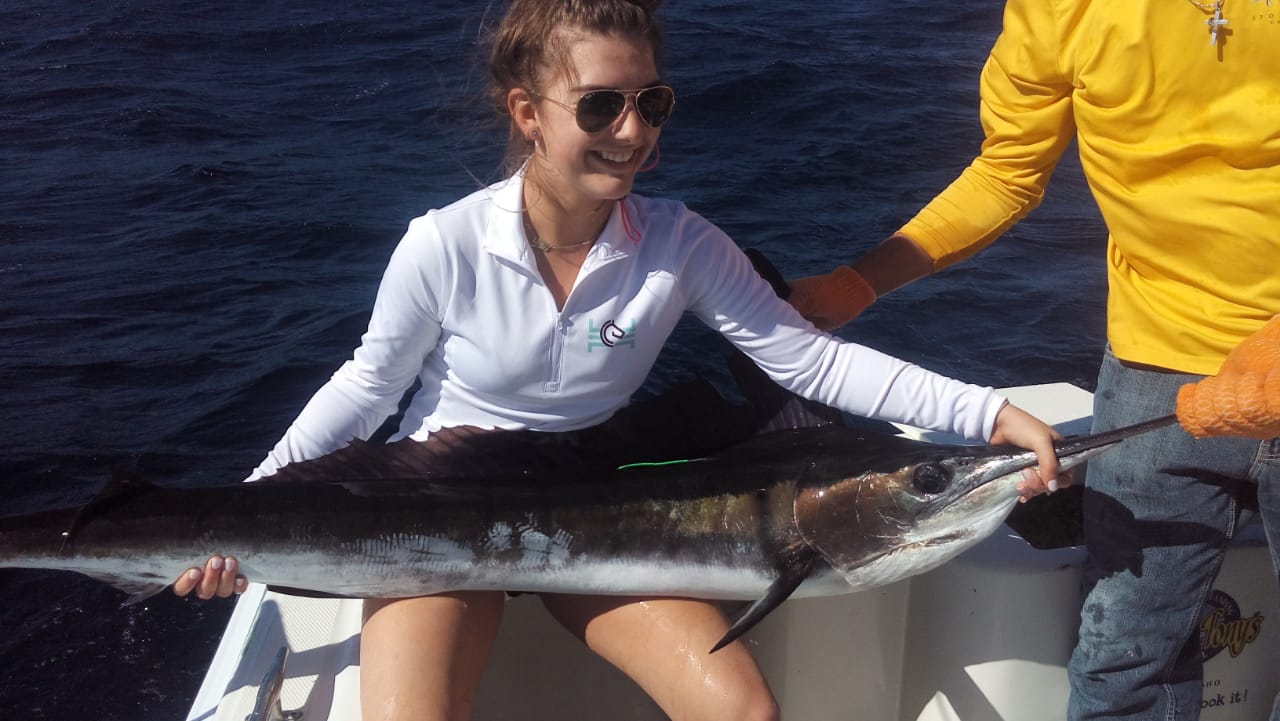 This week dorado numbers have risen and we still have ongoing Finger Bank action, which never disappoints! Although we have seen marlin and tuna numbers go down a few percentage points compared to last week, some of the tuna caught in the past few weeks has been of great size! Most have been around the 20 to 30 lbs mark, but we have seen a couple over 100 lbs hitting the dock. Again, a wonderful week of fishing in Cabo.

For Finger Bank action this week we saw Pisces 52′ Free 2 Play have some great days, with releases of up to 18 Striped Marlin in one day only. Most boats caught around 10 to 15 stripeys each. Anglers the Normandu family from Winnipeg, Canada fished two days aboard the Free 2 Play, heading up both days. December 24th they released 18 Striped Marlin between 100 and 120 lbs each, using live mackerel bait. Two days later they released 15 Striped Marlin around the same size, this time using ballyhoo bait and also landed 3 yellowfin tuna of about 15 lbs each on cedar plug lures just before arriving at the Finger itself.

But the Free 2 Play didn’t only fish the Finger the week, they stuck closer to home and also did well to find striped marlin and tunas nearby.  Anglers the Todd and Roth families from Missouri caught and released 1 striped marlin with them at Golden Gate, on live mackerel bait and also landed 8 yellowfin tunas between 15 and 22 lbs approx. The tunas hit on feathers and cedar plugs out of San Jaime Bank. 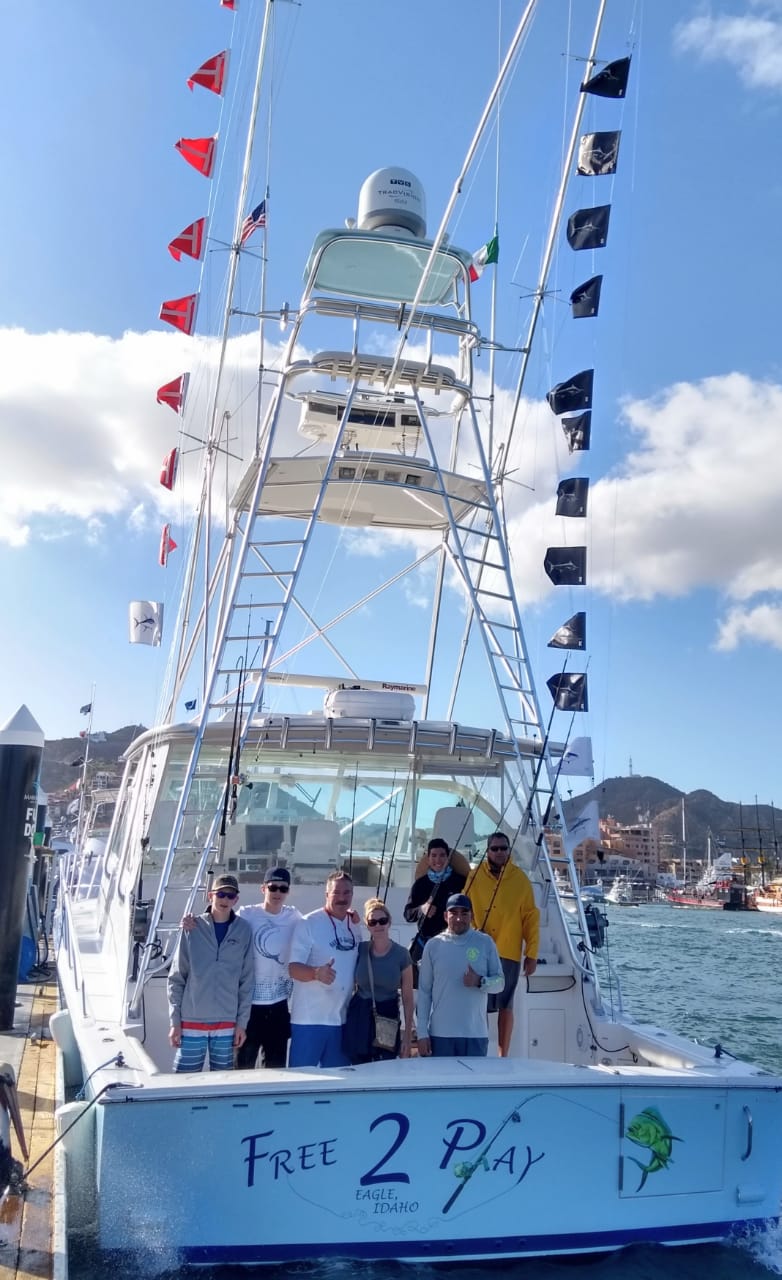 Pisces 31′ Ruthless was very successful again this week at the Finger Bank with 15 Striped Marlin caught and 14 released on Dec 22nd by Adam Taylor, Bernard Archibald and Todd Turner. The largest of the marlin was about 150 lbs, while most averaged between 100 and 120 lbs, caught on mackerel bait. The next day the Ruthless headed up again, this time releasing all 12 marlin caught, with the largest of about 160 lbs, by Jeff, Preston and Spencer Yale from Texas.

Pisces 42′ Caliente had a great day on the 22nd as well, releasing 25 striped marlin and keeping 5 yellowfin tuna around 15 to 20 lbs each. The marlin were all around the 100 lbs range or smaller, with mackerel being the bait of choice. The tuna hit on cedar plugs. Caliente also did well with marlin closer to home, with a small 40 lbs striped, and two others closer to 80 and 100 lbs on December 24th at the Golden Gate bank.

Pisces 31′ Rebecca and Pisces 38′ C Rod fished the Finger later in the week and caught and released 14 striped marlin each, C Rod using ballyhoo for marlin around 100 to 130 lbs and the Rebecca using mackerel with fish closer to 130 to 150 lbs each; the latter were caught by anglers Gabriele and Massimo Sansoni who came all the way from Campania, Italy! 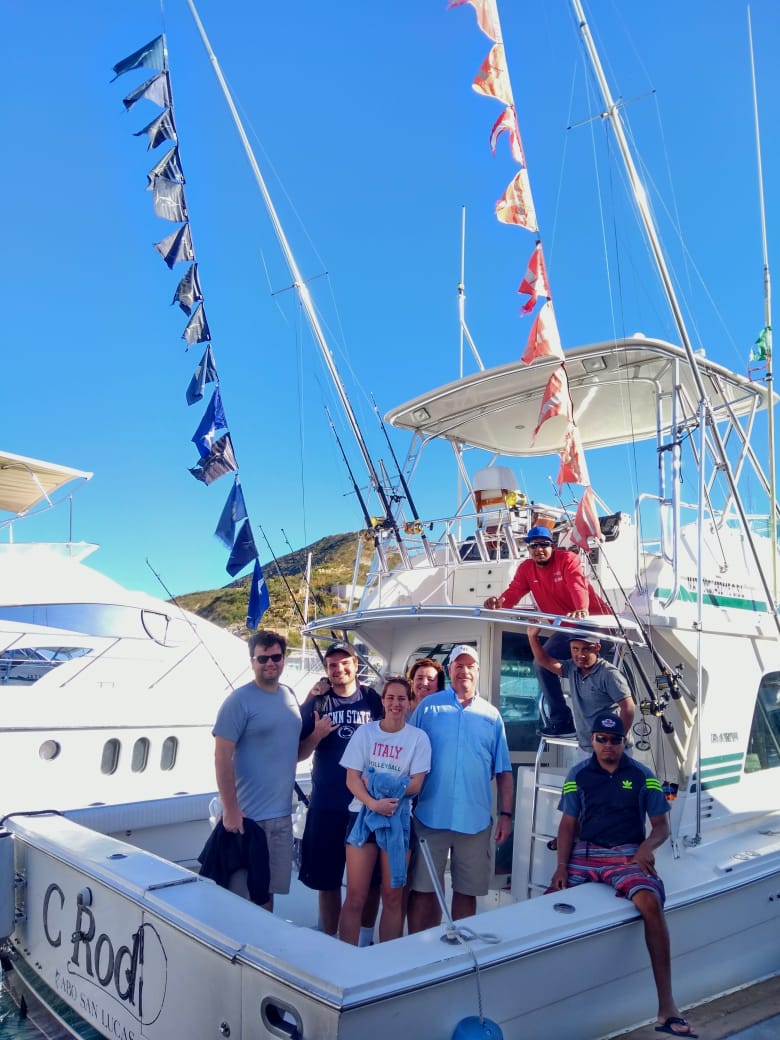 Pisces 31′ Tracy Ann and young anglers between 7 and 12 years old along with mom and dad stayed slightly closer to Cabo, releasing 2 suitably pint-sized marlin of about 30 and 80 lbs each between San Jaime and Golden Gate. Pisces 35′ Valerie also caught and released 2 striped marlin of about 100 lbs each on ballyhoo at Los Arcos by anglers the Gallagher family from Michigan. And Pisces 60′ Reel Machine had an action packed half-day on the 27th, with 1 juvenile striped marlin of about 30 lbs released, which hit on ballyhoo bait out of the 95 spot. Plus, another 10 yellowfin tuna all between 10 and 30 lbs each which hit on cedar plugs out of the 95 Spot.

Similarly, the Pisces 28′ Andrea caught a small 50 lbs striped marlin at San Jaime on a cedar plug and went on to keep 15 yellowfin tuna! Most were about 20 lbs, except for one of about 115 lbs. All caught cedar plugs out of San Jaime. Anglers were Edith and Robert Gogny from Illinois.  This same day, Pisces 31′ Tracy Ann caught a nice 132lbs yellowfin, by angler Abigale McGee from Montana. The family caught 12 yellowfin tuna total, all about 15 lbs except fro this big one, which only took Abigale about 25 minutes to bring in. The fish hit on cedar plugs and petrolero lures out at the 270 Spot. Good work ladies!

The previous day, Dec 23rd, the Tracy Ann found 19 tunas for anglers Alex and Eric Gist, all between 12 and 25 lbs. These hit on feathers and cedar plug lures out at the 270 spot. 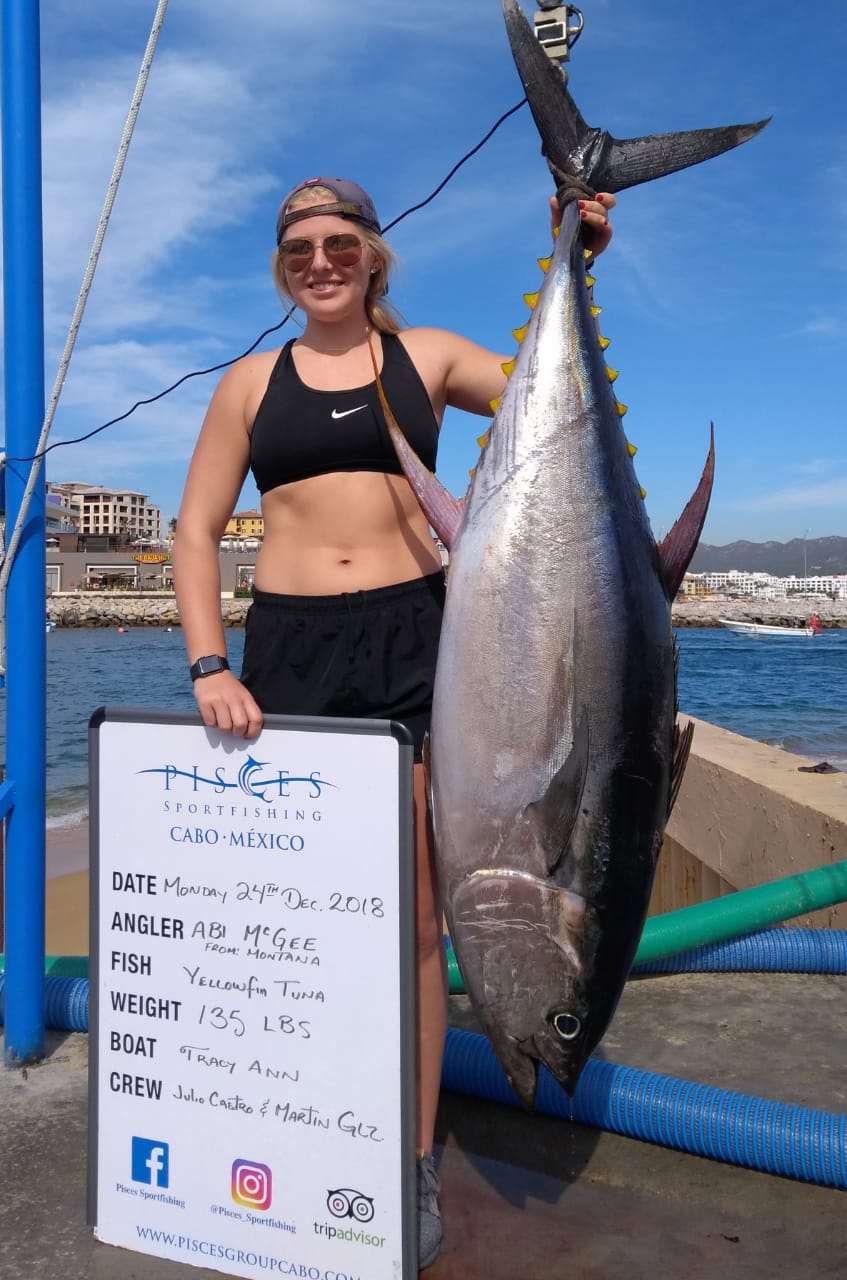 Dorado this week needed to be targeted more specifically as it was found in different locations to the marlin and tuna. Pisces 31′ La Brisa caught 7 dorado when they searched them out specifically at Migrino. They used black/red lures, mackerel bait and ballyhoo. The dorado were all between 10 and 15 lbs and were caught by Charles, Mark and Pietro Secchia from Michigan. Later in the week the La Brisa caught 2 dorado of about 15 to 20 lbs each on ballyhoo between Golden Gate and San Jaime along with 6 skipjacks of about 15 lbs. This same day, Pisces 32′ Bill Collector caught 4 dorado of between 10 and 20 lbs also using ballyhoo in the Golden Gate area.

Pisces 28′ Andrea also searched out dorado specifically and headed to Cerros de Arena area (close to Migrino). The largest dorado was about 20 lbs, and they hit on a combination of feathers, mackerel bait and cedar plug lures.  They caught 6 dorado total. Anglers were the Goodwins from Scottsdale, Arizona. 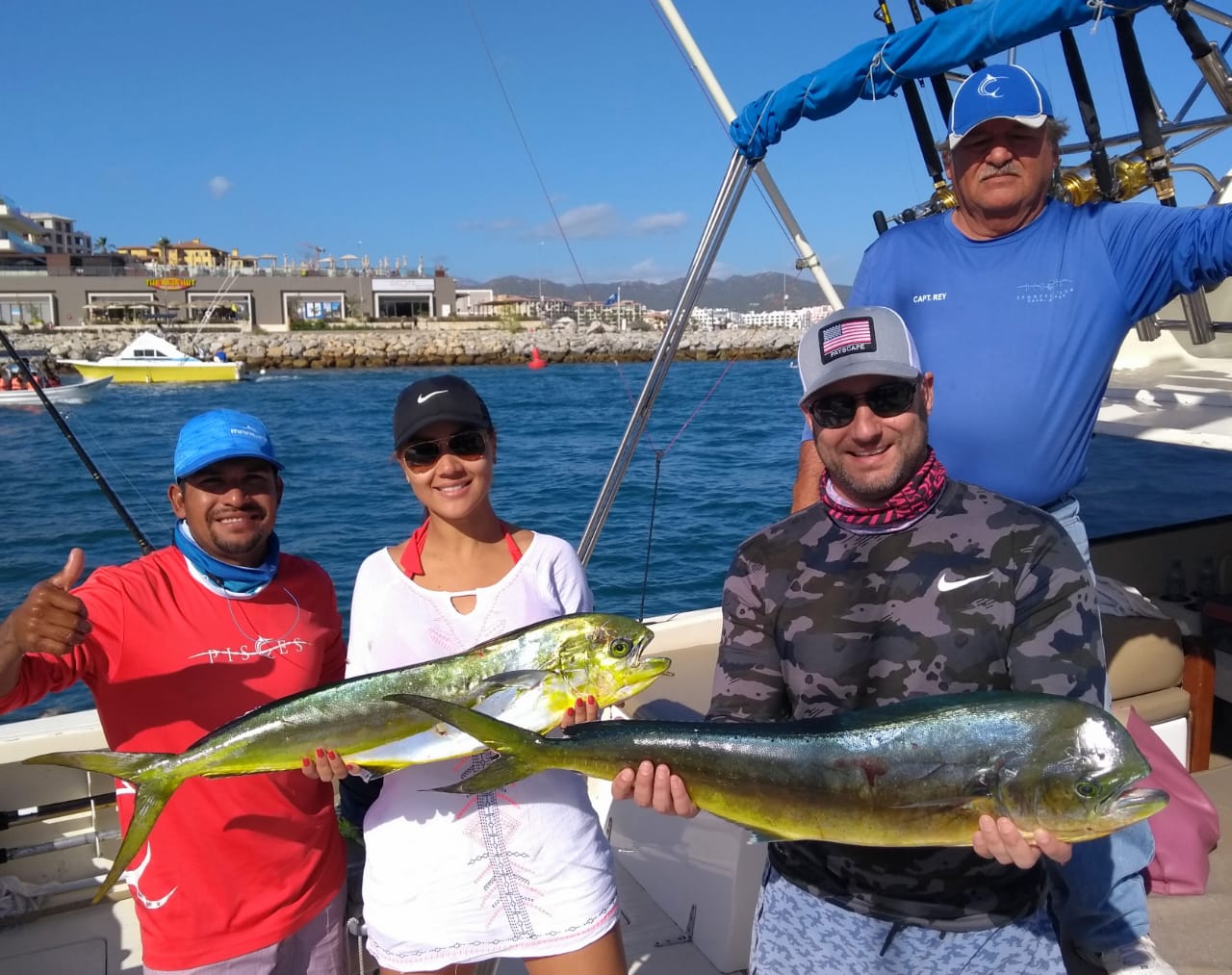 We had quite a few pangas targeting small game this week, along with others like Pisces 35′ Valerie who caught a nice 8 lbs sierra, along with a smaller 4 lbs one at Cabeza Ballena along with 3 bonitas for the Bellini family from Franktown, Colorado.

WEATHER CONDITIONS: Sunny and Overcast, a few days with calm seas, but others with some wind and chop.