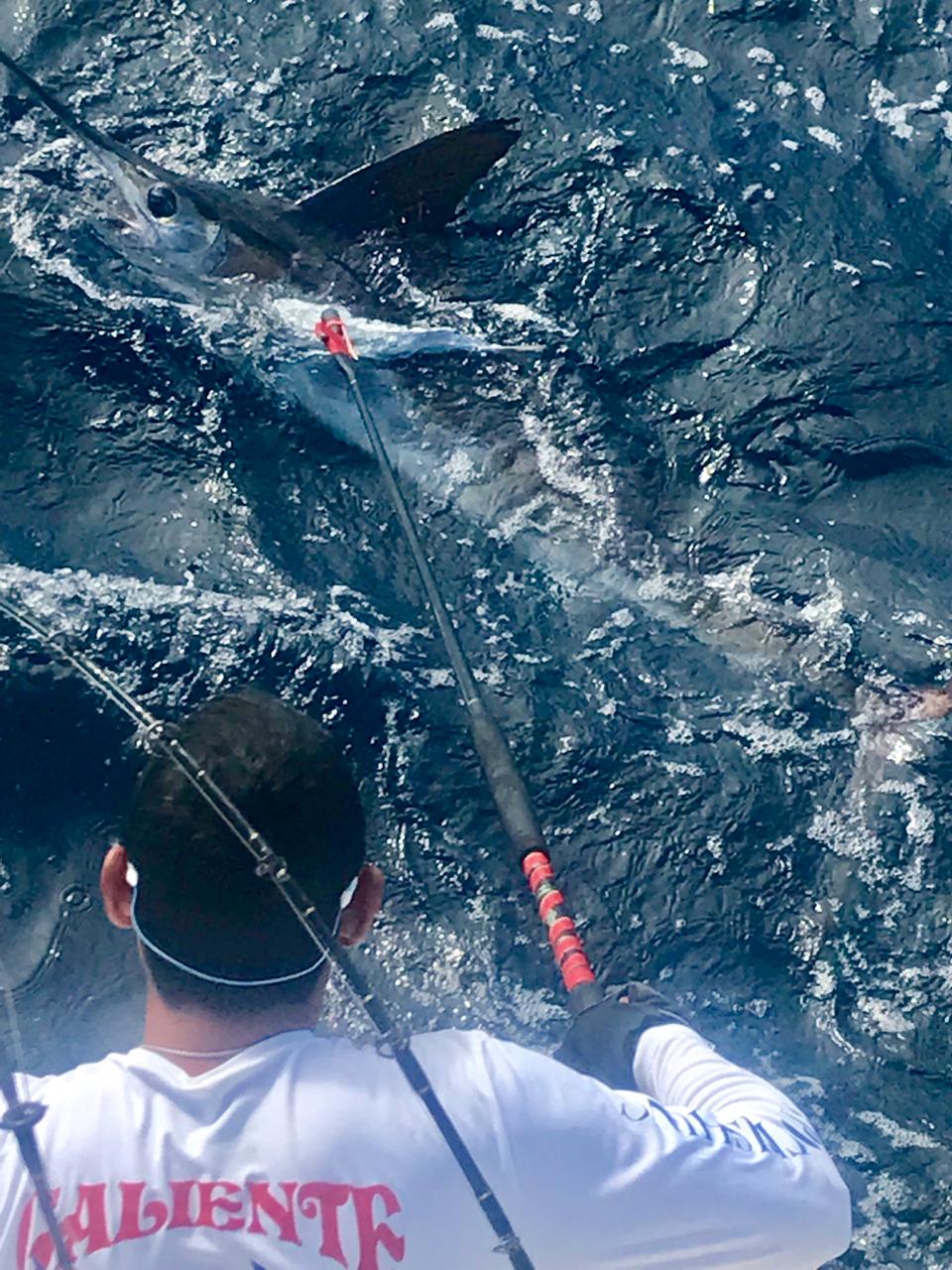 This week’s fishing has maintained itself pretty close to last week’s numbers. Steady tuna and dorado catches, and some anglers targeting other species successfully, such as yellowtail, sierra, triggerfish, and snapper. The marlin have started to make somewhat of a move out of the Finger Bank and we have been finding many this week closer to Lands End, from The Old Lighthouse to Los Arcos. And although the Finger Bank fishing has still been successful t it’s no longer consistent numbers of marlin topping 30+ per boat, but more of an average of 8 -15 marlin caught per boat; which is still impressive and of course very fun.

This week I’d like to point out an angler, more than a specific boat, and this is Mr. Massimo Sansoni from Rome, Italy. He fished with us for 6 days over the course of the past two weeks. His son, Gabriele accompanied him on some of the days, but mostly it was just him out there, making the long trip from Europe well worth it. He caught, tagged (many) and released 62 Striped Marlin in his time with us. Fishing most days at the Finger Bank and only one day near by. His boats of choice were the Pisces 31′ Tracy Ann and the 31′ Rebecca. Mr. Sansoni fished with us for the first time about 10 years ago, and was finally able to make it back. Well it was certainly our pleasure and lots of fun to have him with us!

With the Tracy Ann he caught 19 Stripeys, all around 100 – 140 lbs each on mackerel bait. one of his striped marlin was caught closer to home out of the Old Lighthouse where he also caught 3 yellowfin of about 15 and 20 lbs. Aboard the Rebecca he caught a total of 43 striped marlin! These were all at the Finger, also using mackerel and with fish being caught of about the same size, except for a few larger approx 180 lbs striped marlin too. 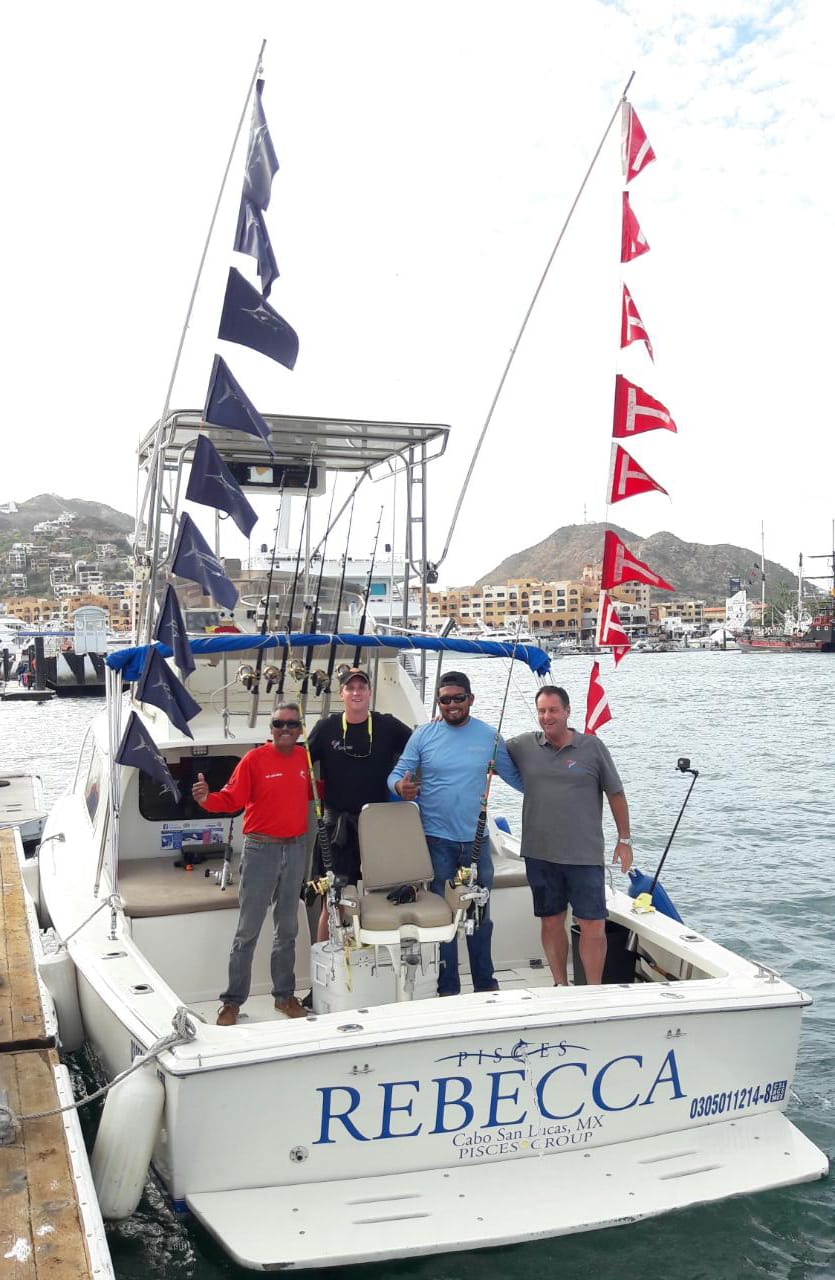 Pisces 38′ C Rod also headed to the Finger this week, having a fantastic day at the beginning of the week with 20 striped marlin released on mackerel, and 1 dorado of about 10 bs caught too. Anglers were Conrad Miller, Dan Halama and Scott Curtis from Colorado. C Rod did well with marlin and dorado closer by late win the week as well, releasing 2 striped marlin of about 120 lb each on mackerel near Pozo Cota/ Los arcos area. Again, they landed a nice dorado, this time of about 18 lbs; on mackerel. Anglers this time were Caleb Reams, Scott Simanek form Chicago.

Pisces 32′ Bill Collector also headed up to the Finger on two different days, catching and releasing 8 striped marlin each time. Plus one dorado! The largest of their marlin was approx 190 lbs and hit on mackerel bait, caught and released by the Hauser family from Texas.

And December 29th, although choppy and windy out at the Finger, Pisces 42′ Yahoo and Pisces 52′ Free 2 Play anglers did a great job of catching and releasing 23 marlin total. The Yahoo anglers, families Tragessar and Ptokpchuk’s released 13 marlin, with the largest of about 180 lbs; while the Dubeau’s aboard the Free 2 Play did well to successfully catch and release 10 stripes and 3 dorado (releasing one). 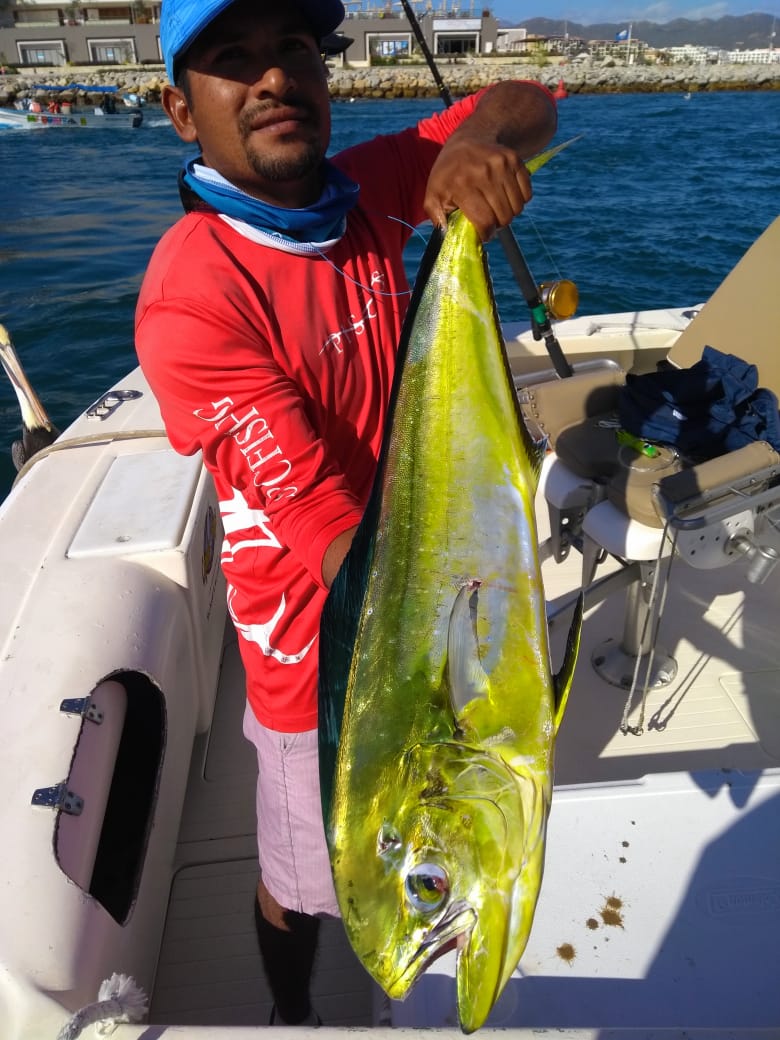 Pisces 72′ Tag Team, did well later in the week on calmer waters, releasing 12 Striped Marlin between 100 and 120 lbs each apron and also did well closer to home, with 3 small striped marlin released 5 miles out of the 95 spot on mackerel bait.

Most of the boats that stayed closer by for marlin did very well to find them, and we had an average of about 3 per boat released, along with dorado or tuna many times. January 2nd thru 4th were some of our most productive days, with Pisces 28′ Andrea releasing 3 stripeys, of about 25 lbs, 60 lbs and 100 lbs each. They used mackerel bait at the Old Lighthouse. The next day the Andrea and anglers Isaac and May Gerken from Denver caught 3 striped marlin as well, again close to the Old Lighthouse and slightly further up the coast.  This time the marlin were about 100 lbs each and hit on mackerel bait. Pisces 31′ Cabolero also released three, all about the same size as Andrea’s first day, 20 – 70 – 90  lbs approx, but the crew used mackerel and lures (green, orange) at the Old Lighthouse and Solmar area. Pisces 42′ Caliente headed a bit further up the coast, at  the Cerros de Arena area and released 4 striped marlin between 30 and 100 lbs each. Tracy Ann did well in this area too, sticking close to the Old Lighthouse ad releasing 3 striped marlin for Anglers from Georgia.

Pisces 31′ La Brisa released 2 striped marlin in this same area, 120 and 130 pounders, on mackerel. They also landed a nice dorado, of about 40 lbs! A good day for anglers Bret and Reese Bowen. The day after, La Brisa headed instead for tuna, and did a great job landing 14 yellowfin that ranged from 20 to 80 lbs each. These hit on cedar plugs, feathers, and hoochi lures out at the 180 Spot (about 30 miles out) 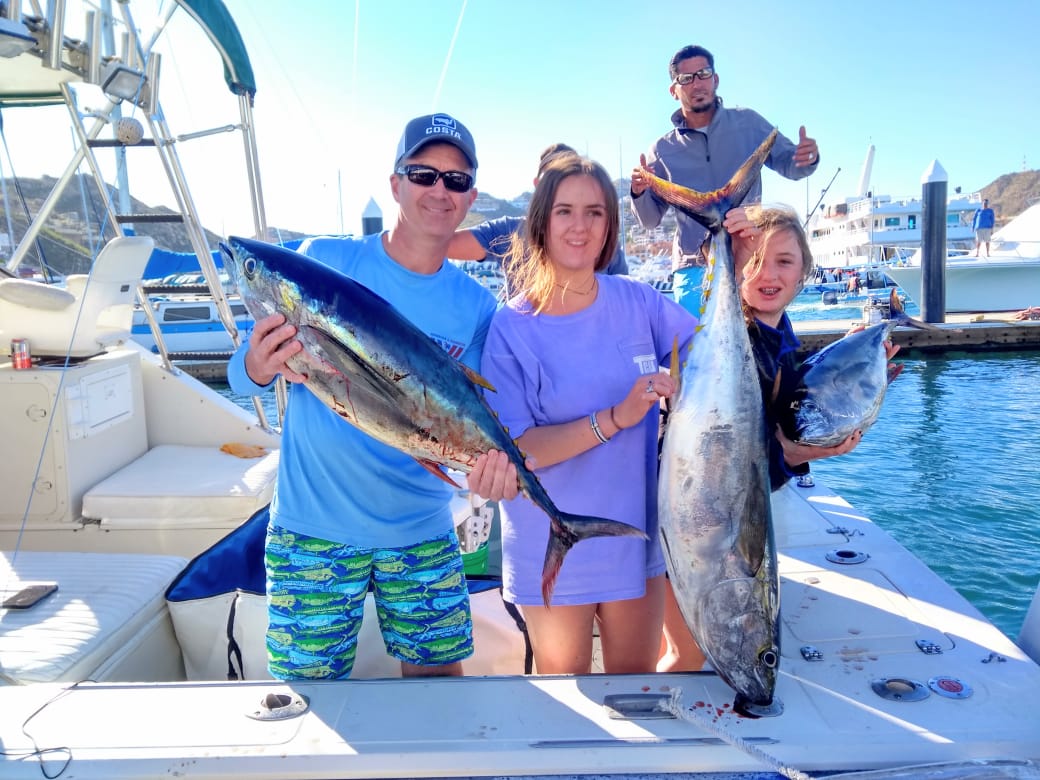 Pisces 27′ BajaMark did well with the tunas too, starting the week off with one 68 pounder and 8 others of about 20 lbs each. They used blue lures, feathers and cedar plugs about 35 miles out from Old Lighthouse. The next day they caught 10 yellowfin between 15 and 40 lbs each, using the same lures and in same location. Pisces 37′ Tag Team caught 5 yellowfin, heading to San Jaime and using feathers and cedar plugs, with the largest tuna of about 80 lbs.

Pisces 52′ Free 2 Play also headed for tunas, but at about 35 miles off the coast at the 180 Spot. There they found 19 yellowfin, all between 20 and 40 lbs each. These hit on cedar plugs, purple lures and mackerel bait. Pisces 35′ Valerie did well with yellowfin, landing 15 of about 20 and 30 lbs each at about 30 miles from the 170 Spot, with anglers the Giessel family form Texas putting the hard work. Pisces 42′ Hot Rod also went about 35 miles out to the 180 Spot and caught 12 yellowfin of about the same size on cedar plugs, and blue/white and green lures. One wahoo hit on a purple lure there too, it was approx 15 lbs. 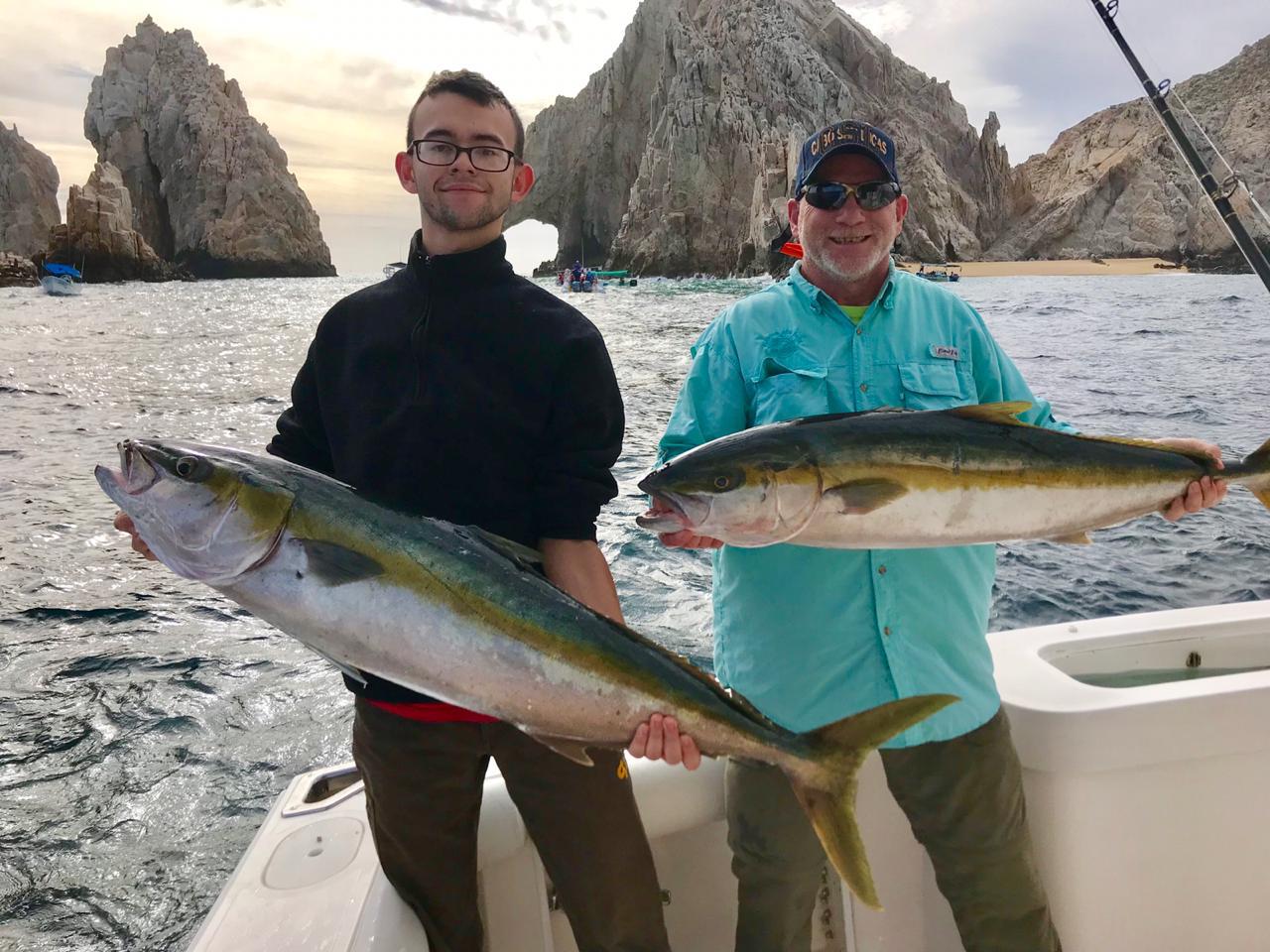 As for other species caught this week, we saw quite a bit of diversity, Pisces 42′ Caliente caught and released 2 striped marlin and kept 2 nice yellowtail of about 30 lbs each on mackerel out of Los Arcos.

Pisces 35′ Valerie had a great day Jan 2nd releasing 3 striped marlin of about 110 lbs on mackerel at Golden Gate and then coming in closer to shore for some sierra, 5 in total, and some triggerfish. A few days previous, the Valerie did well to diversify their catch again, landing 1 dorado of about 15 lbs at las Margaritas and 1 hammerhead shark that took their mackerel as well (which they released of course). Then they did some chumming and caught 19 triggerfish (releasing some), 1 ladyfish, 1 grouper and 1 mojarra. Anglers were the Billini family from Colorado. 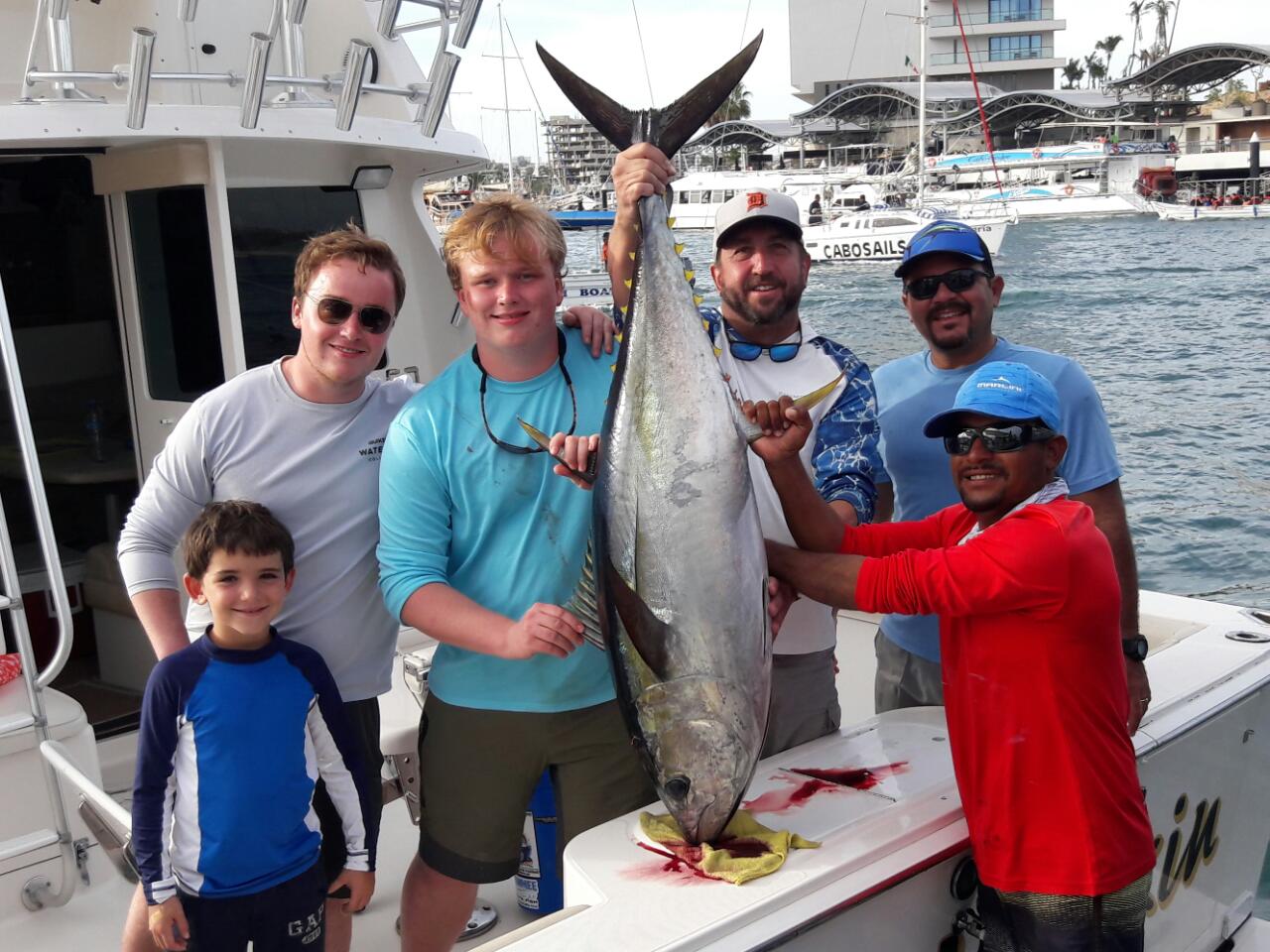 WEATHER CONDITIONS: Weather was hit or miss, mostly calm seas but some rough days scattered in between. Wind picked up and died down throughout the day (afternoons were usually calm). Mostly overcast.