This week we saw a more marked division among what species anglers targeted; with the fishing being a bit scattered at the moment, some opted to stay close and go for smaller game or dorado, while others went out further looking for either tuna or marlin. A few anglers made the extra effort to “guarantee” themselves their billfish, going about 50 miles up the Pacific coast to the Finger Banks. For those that did, it paid off, with boats catching upwards of 8 striped marlin each.

Anglers aboard Pisces 38ft C Rod did a very good job out at the Finger Banks, catching and releasing 12 striped marlin, all weighing approximately between 100 and 150 lbs. They were caught on mackerel bait by the Holmes family, Braden, Creig, John and Johnathan from Texas. 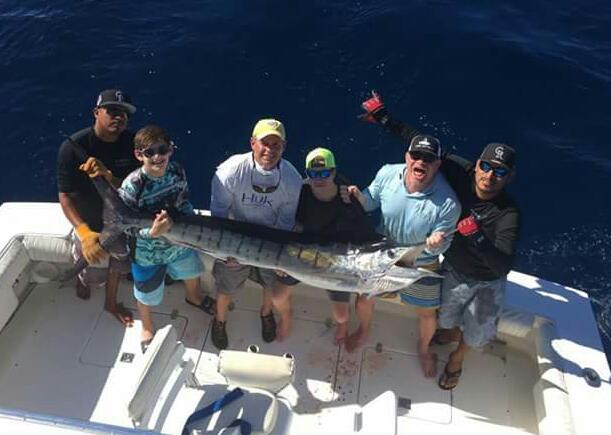 Anglers aboard the Pisces C Rod with one of the 12 marlin they released that day!

Also with luck out at the Finger Banks we had Pisces 31ft Tracy Ann and 35ft Valerie. The Tracy Ann and anglers Bradley Holstein and Caroline Ryan from Connecticut used mackerel bait to catch and release their 8 striped marlin all between 100 and 140 lbs and also managed to land 5 yellowfin tunas at Golden Gate, on cedar plugs.

The Valerie with Captain Roberto Sandez and the Dow family caught and released 6 marlin, all about 100 to 120lbs also on mackerel bait at the Finger. This was after they did not get their fill of marlin a day before, when they caught and released 2 striped marlin of about 180 lbs also on the Valerie, but out about 22 miles at the 180 Spot. There they landed 7 tunas as well, which hit on cedar plugs and hoochi lures. I think it’s safe to say they got their marlin fix for the month now!

For the only blue marlin landed this week, we had the Pisces 32ft Billcollector catch and released a 350 pounder out from the Old Lighthouse, which hit on a green and yellow lure. Anglers from Indiana also caught three nice sized tunas, ranging in size from 20 to 50 lbs, which hit on cedar plugs and feathers out at La Herradura. 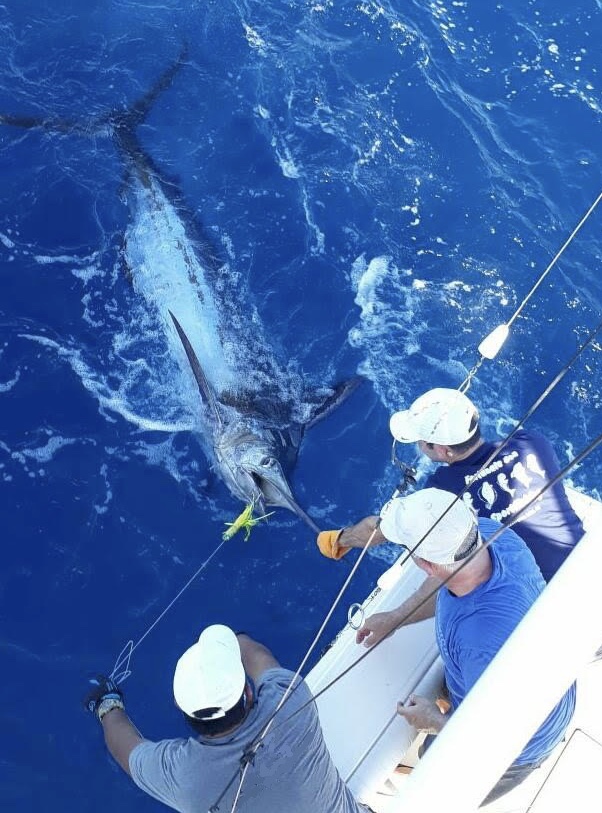 Anglers and crew about to release their blue marlin, estimated at 350 lbs, aboard the Pisces 32ft Billcollector

The Pisces 31ft Tiburon and Anglers Patrick and Victoria Dewey from Arizona almost had themselves the 2nd blue marlin of the week, but they lost it during the fight, a fish thought to be about 500 to 600 lbs by the crew. They did land two dorado though of about 10 and 15 lbs, which hit on green and black lures out at Migri?o.

Also a great day for the Pisces 42ft Yahoo, which caught and released 1 striped marlin of about 150 lbs on mackerel bait out form Los Arcos, as well as 1 dorado of about 25 lbs on ballyhoo bait at Las Margaritas, and lastly 2 yellowfin tuna of about 25 lbs outside of Los Arcos on cedar plugs. Anglers were the Shruck and Armitage families from Marietta, Georgia. 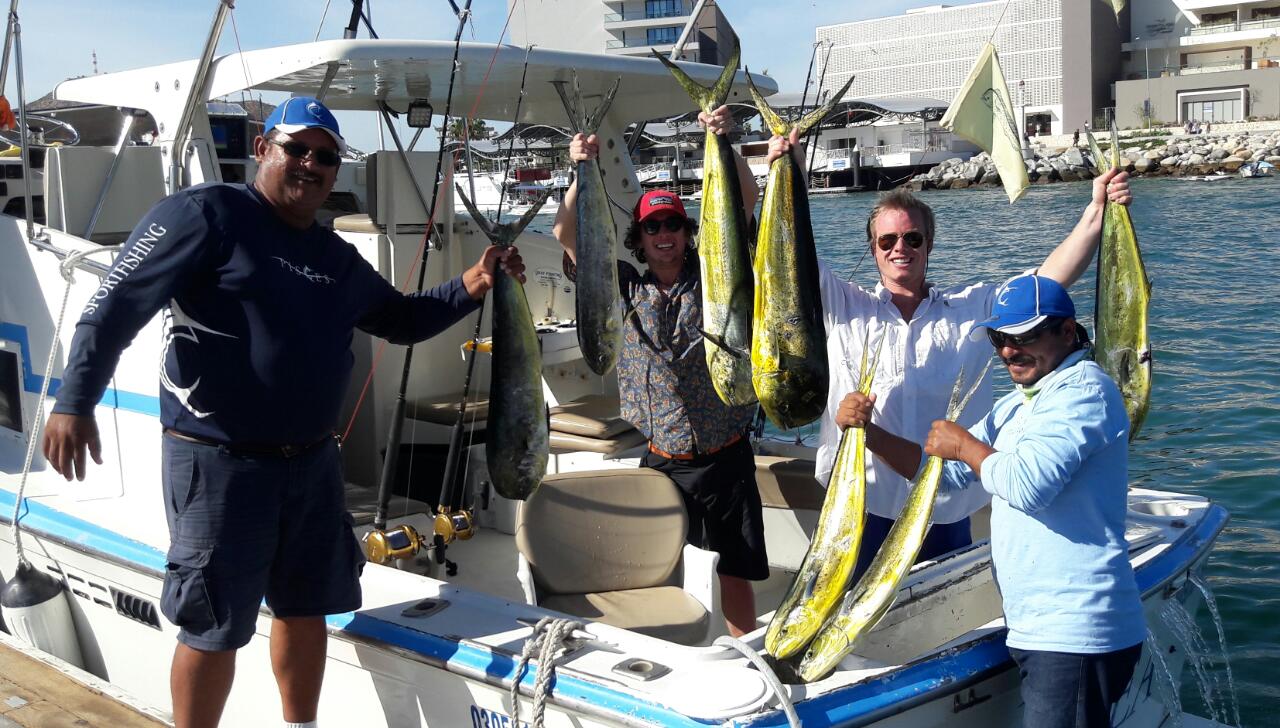 As for the anglers looking for smaller game fish and dorado, they found it alright. For example, the McFall family went out on Pisces 28ft Adriana and caught 2 dorado of about 15 lbs on mackerel and feathers as well as 1 roosterfish, also on mackerel, 1 grouper, 4 ladyfish, 1 yellowtail and 12 red snappers. These were caught out at La Palmita area. They family fished a second day aboard Pisces 25ft Panga Poseidon and caught 1 dorado of about t 10 lbs, 1 yellowfin and 1 sierra on mackerel and sardines out from Solmar.

A total of 430 fish were caught this week by Pisces boats, with 40 being marlin, 90 tuna and 187 dorado. All catch limits respected.