What a week! BIG tuna found consecutively this week, with the largest caught being over 300 lbs. aboard the 31ft Rebecca. Other catches still included strong numbers of billfish, with one of the first black marlin caught by Pisces boats this year, as well as some grouper, rooster fish, Spanish mackerel, wahoo and a few sharks. 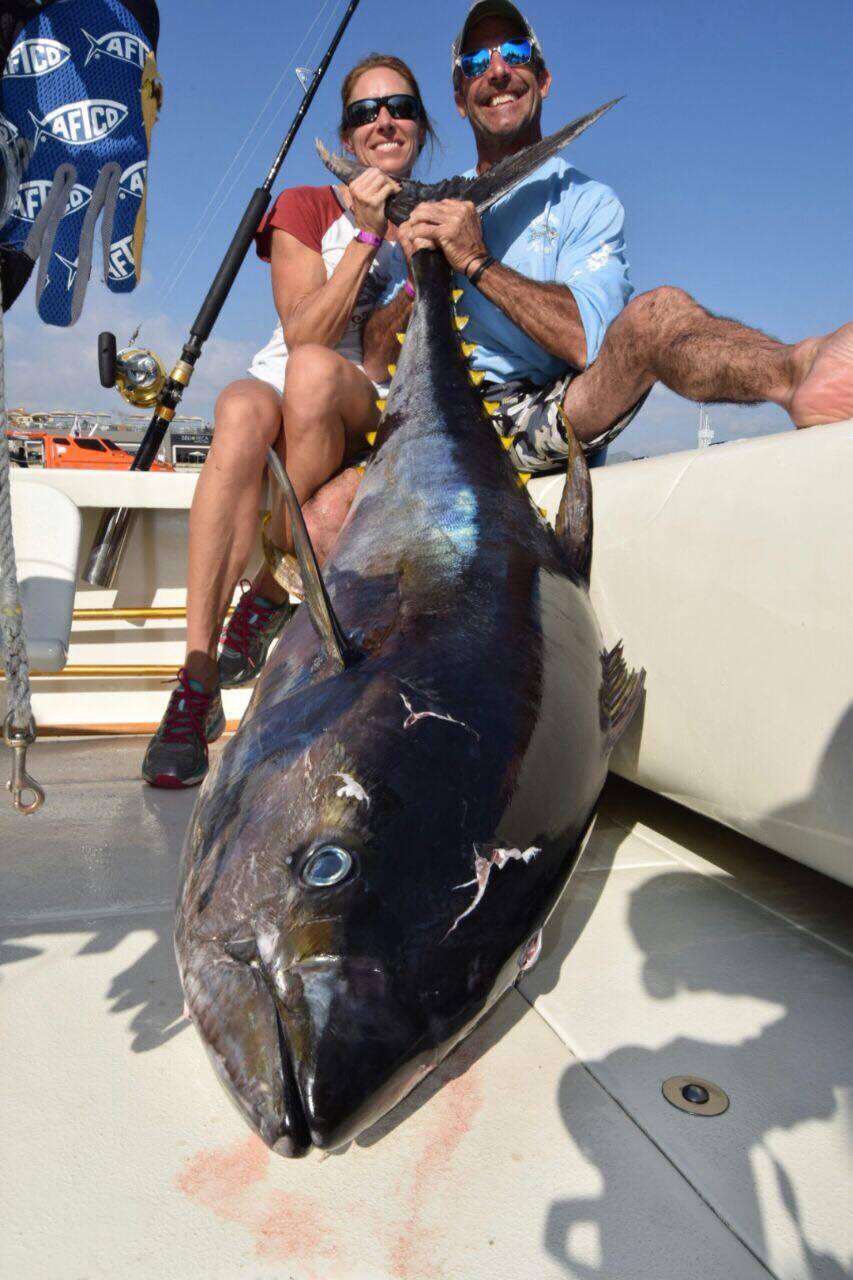 The largest of our monster tunas caught this week was a 305 lbs yellowfin caught on December 5th, by a group of anglers, Gary, Jenelle, Nicole and Roger, from Rhode Island, aboard the 31ft Rebecca. They landed the fish about 38 miles out from the Cerros de Arena on a yellow and orange lure. And if that wasn’t enough of a lucky streak, the 31ft Rebecca proved impossible to beat this week, with not only the biggest tuna, but also the most marlin caught by any boat this week and by the same anglers. What a team! Seven striped marlin caught and released total, all around 100 to 130 lbs and all landed on mackerel bait out at Cerros de Arena again.

This same day, the La Brisa caught the only black marlin of the week, and one of the only ones of the season, along with two other striped marlin as well. The lucky anglers of the day were Cecilia Sharp and Ted Schmiedeke from California. The striped marlin hit on mackerel bait and while and weighed between 80 and 100 lbs, while the black marlin weighed approximately 300 lbs and hit on a white lure. All fish were released. 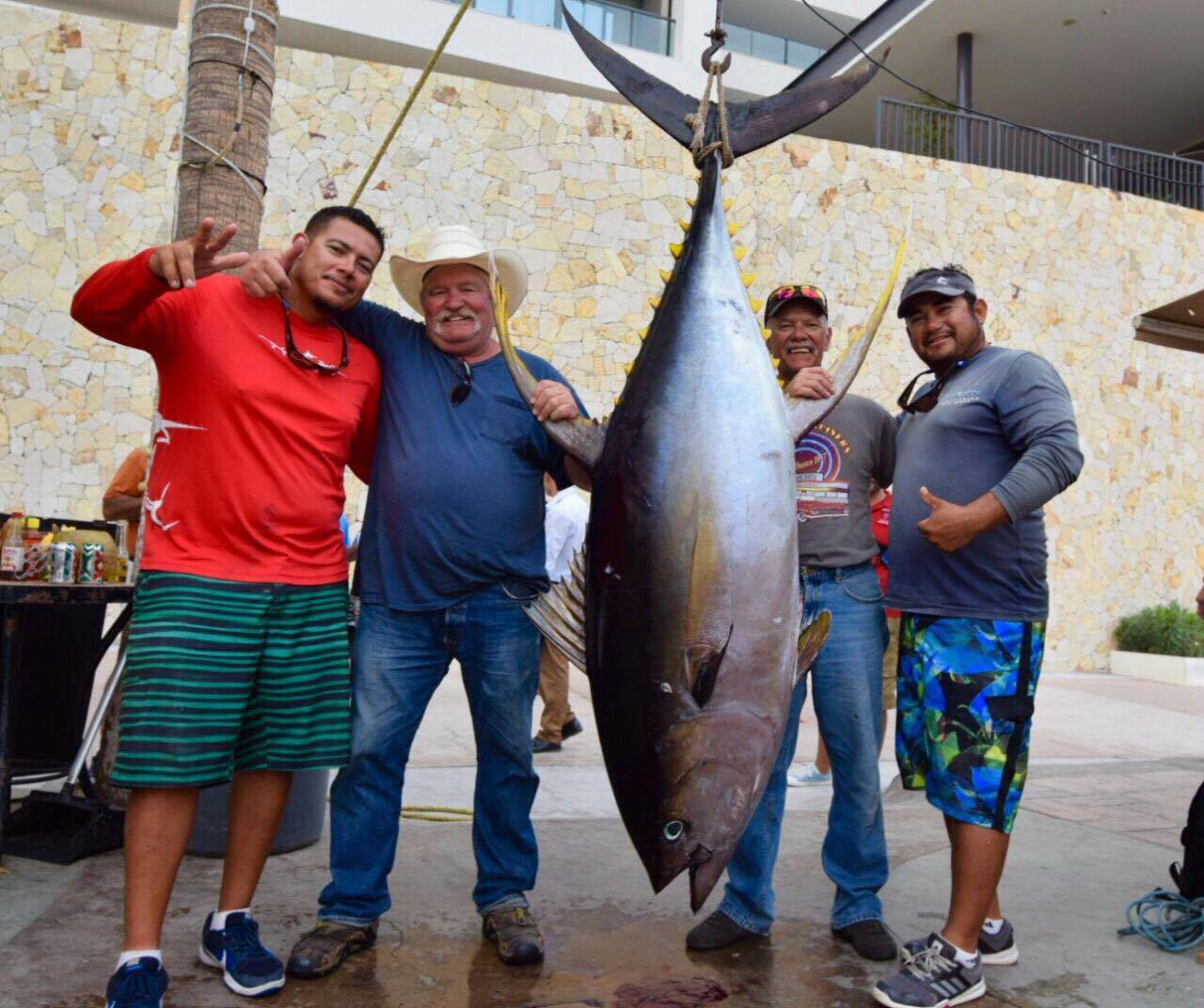 Anglers aboard the 31ft Ruthless with their 286.5 lbs tuna

The next day, another big tuna, this time for anglers from Bob Engstrom and Michael J. Stamp from Wyoming, aboard the 31ft Ruthless. Not only did they land a huge 286.5 lbs yellowfin, but they also caught another 14 tuna all ranging in size from 10 to 40 lbs!  The fish were caught on lures, black and red mostly, at about 35 mile out form the 240 spot.

And how about some nice luck with marlin on the 61 ft Tag Team? Four marlin landed in one day, all weighing approximately from 100 to 180 lbs, landed on mackerel bait and released out at Cerros de Arena. Anglers were the Maldonados and Caffuccios from California.

The 38ft C Rod had a great day of smaller game fish on December 2nd, with anglers from California landing two yellowfin tuna of around 15 lbs on sardines out at Palmilla area. They also caught a nice Spanish mackerel or sierra, also on sardines, as well as a nice 40 lbs wahoo out of the 95 Spot, on mackerel bait.

December 3rd was also a nice day for 28ft Adriana, which along with anglers from NY, caught 12 fish total: three dorado of about 12 lbs each, six sierra and three rooster fish of about 12 lbs as well. The roosters landed on mackerel, the sierra on rapala lures and the dorado on feathers and purple lures, out at Migri?o.

There was a total of 258 fish caught by Pisces boats this week, with 68 fish being marlin, 88 tuna and 50 dorado; many specimens released, with all catch limits well respected.

WEATHER CONDITIONS: Clear, calm with only one very windy day, with some swell.