The amazing Finger Bank action continues with up to 46 striped marlin released on Pisces 72′ Tag Team! Marlin still moving down close to Cabo too, but fish that were being found between the Old Lighthouse and Margaritas area are a bit more scarce; showing up in good numbers at the Golden Gate bank instead. Up to 7 marlin caught here by Pisces 35′ Valerie, with an average of 2-3 per boat. Tuna numbers have risen compared to last week, with a nice 100 pounder caught as well, although captains are still going quite a distance to find them. Dorado are also around and smaller game fish have included grouper, wahoo and only a few roosterfish.

Marlin on the run at the Finger Bank, fought by Pisces 31′ Tracy Ann

Again, I’m finding it difficult to know where to start this week, with so many great catches to share! 63 boats out this week, and 61 catching fish! Over 270 marlin caught and released and 195 tuna caught with releases seen here as well, as anglers reached limits.

Our top release boat at the Finger this week was the Pisces 72′ Tag Team, who had yet to get in on the Finger Bank frenzy, but settled right in releasing 46 striped marlin of about 100 lbs each on ballyhoo bait. They also released the only blue marlin, also around100 lbs. On another run to the Finger they released 35 striped marlin, this time on mackerel and ballyhoo. Baby brother 37′ Tag Team III also headed to the Finger and released 13 striped marlin and released another 4 on another day, slightly closer to home, between San Jaime and Golden Gate area. The marlin hit on mackerel and a black/green lure.

Pisces 42′ Caliente did very well at the Finger bank this week too, with Captain Jaime Gonzalez leading anglers to catch and release his lucky number of marlin it seems, 34 in total. They used mackerel bait, with fish that ranged between 80 and 120 lbs each. Later in the week, Caliente headed to San Jaime Bank in search of tuna and found them using cedar plugs and feather lures. The largest of the 7 caught was about 50 lbs, while the others were between 15 and 20 lbs each. 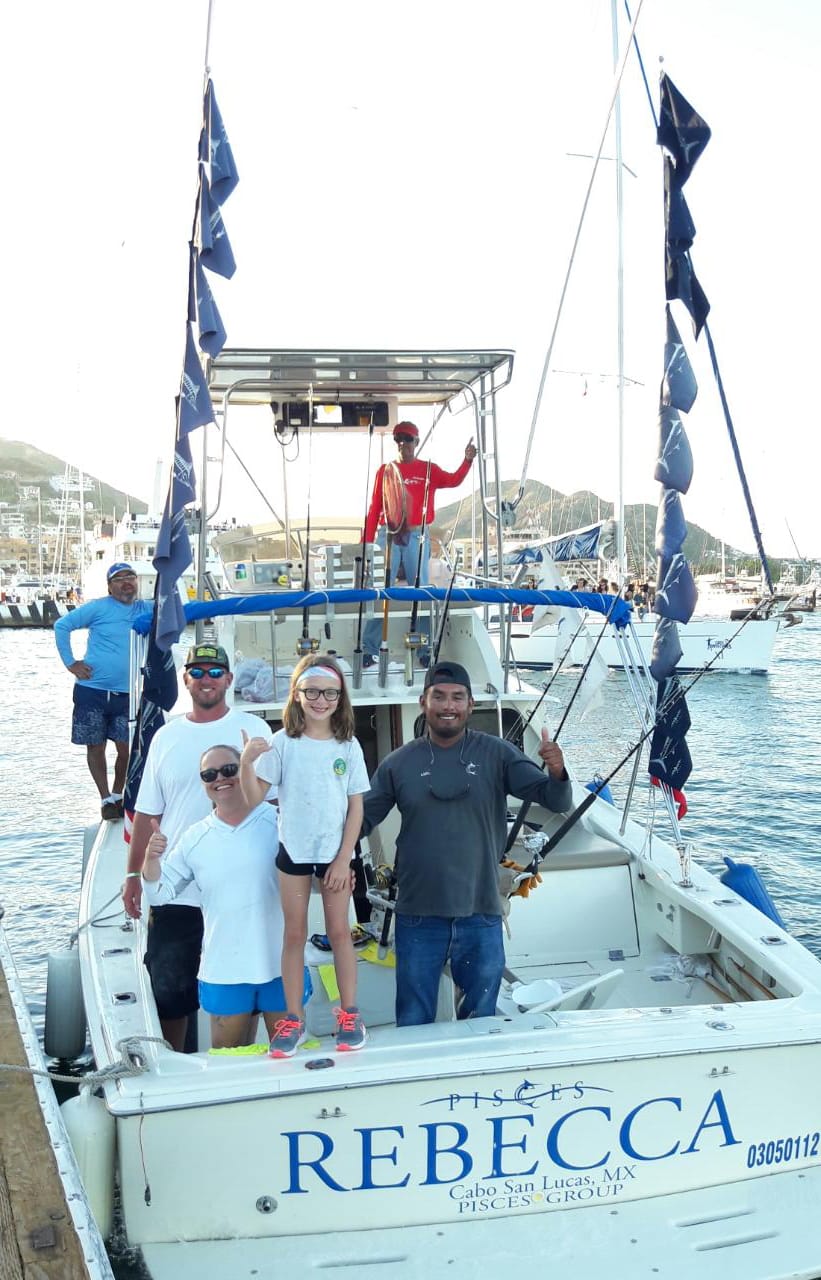 Pisces 31′ La Brisa anglers, the Ondrusek’s and Hodges’ from Arizona did a great job at the Finger as well, catching and releasing 18 striped marlin in total, which hit on mackerel bait. The stripeys were about 120 to 140 lbs. each. La Brisa went looking for tuna this week as well, with 18 caught as well all of about 10 to 15 lbs, hitting on feathers, cedar plus and lures: green and white/blue. They headed about 32 miles, just outside of Golden Gate to find them. Anglers were Bret and Clifton Naylor form Houston, Texas.

Pisces 31′ Tracy Ann also headed to the Finger with 20 striped marlin released by only two anglers, David Palmer and James Schrank from Huntington, Texas. The stripeys ranged from 30 lbs at the smallest, up to a 160 lbs each! Closer to home, Tracy Ann found 4 striped marlin, which anglers Judy and Bruce Berger released, out at San Jaime, on mackerel bait. The next day, Greg Mauch and Kyle Kelly from Missouri released 3 striped marlin with Tracy Ann out of Golden Gate on mackerel. And anglers Traci and Travis Allred ,looking for tuna found them out at the 210 Spot (some 37 miles out) on Tracy Ann using feather and cedar plug lures. 22 tuna were caught in total, but respecting limits, they released three. 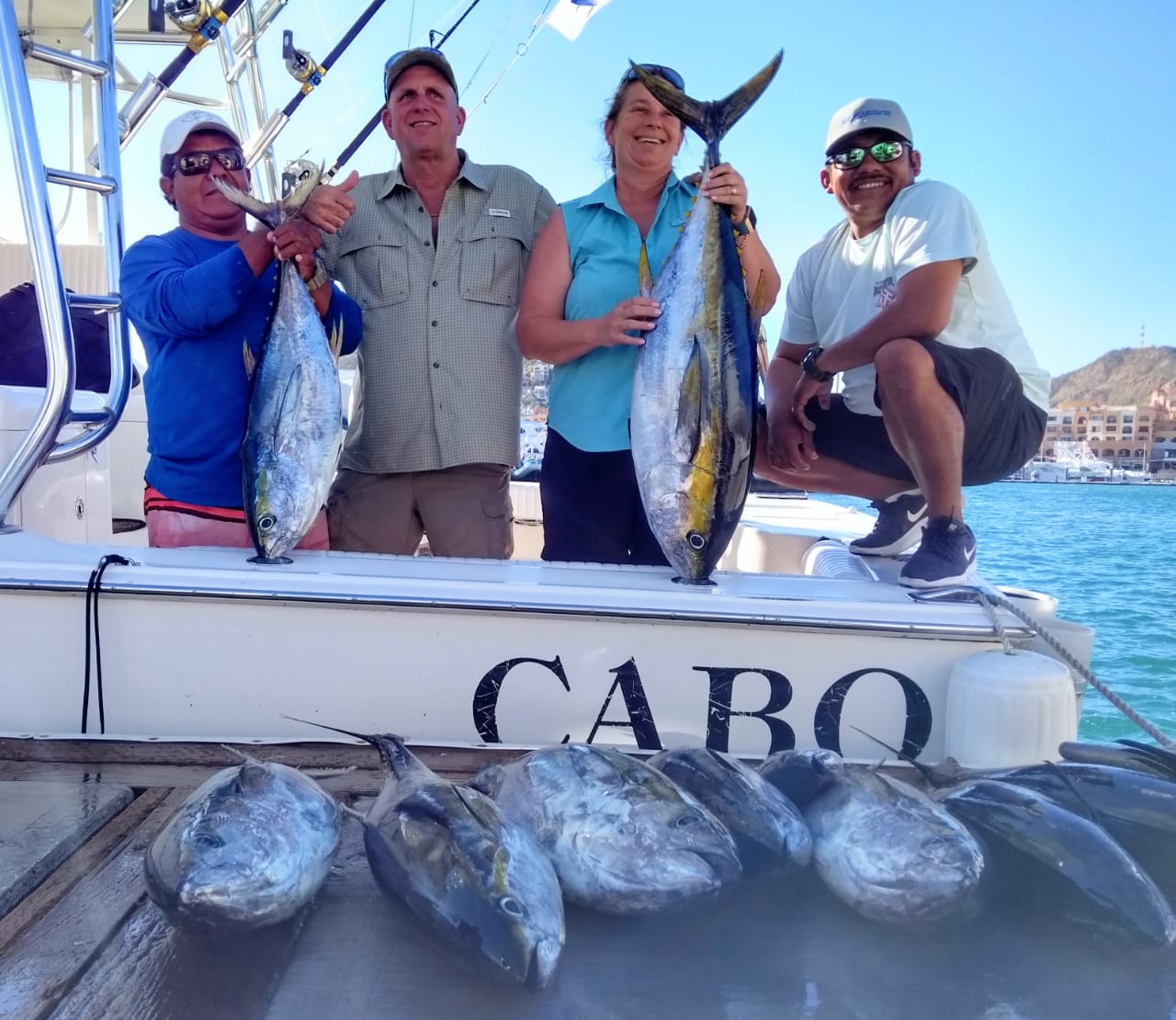 Pisces 32′ Bill Collector with angles Judd and Karla showing off their catch!

Pisces 32′ Bill Collector got in on the tuna action of course, with anglers Judd Toepperweinac and Karla Miller form Delaware fishing the 12th and 14th landing almost equal catches on both days. They caught and released 2 striped marlin total and 19 yellowfin. The first day they headed to the 260 spot, where the tunas caught reached up to 40 lbs each and their second day they headed to San Jaime. Both days they used a combination of cedar plugs, feathers and green lures.

Pisces 31′ Rebecca also headed to the Finger this week, with anglers Trent, Stacy and young 8 year old daughter Marlynn Glaub from North Palm Beach, Florida doing a great job of releasing 20 striped marlin. The marlin were mostly between 100 and 130 lbs. each but some reached up to 160 lbs., they also had time (and energy) to land some nice tunas for dinner, catching 7 total, of about 10 to 20 lbs each. 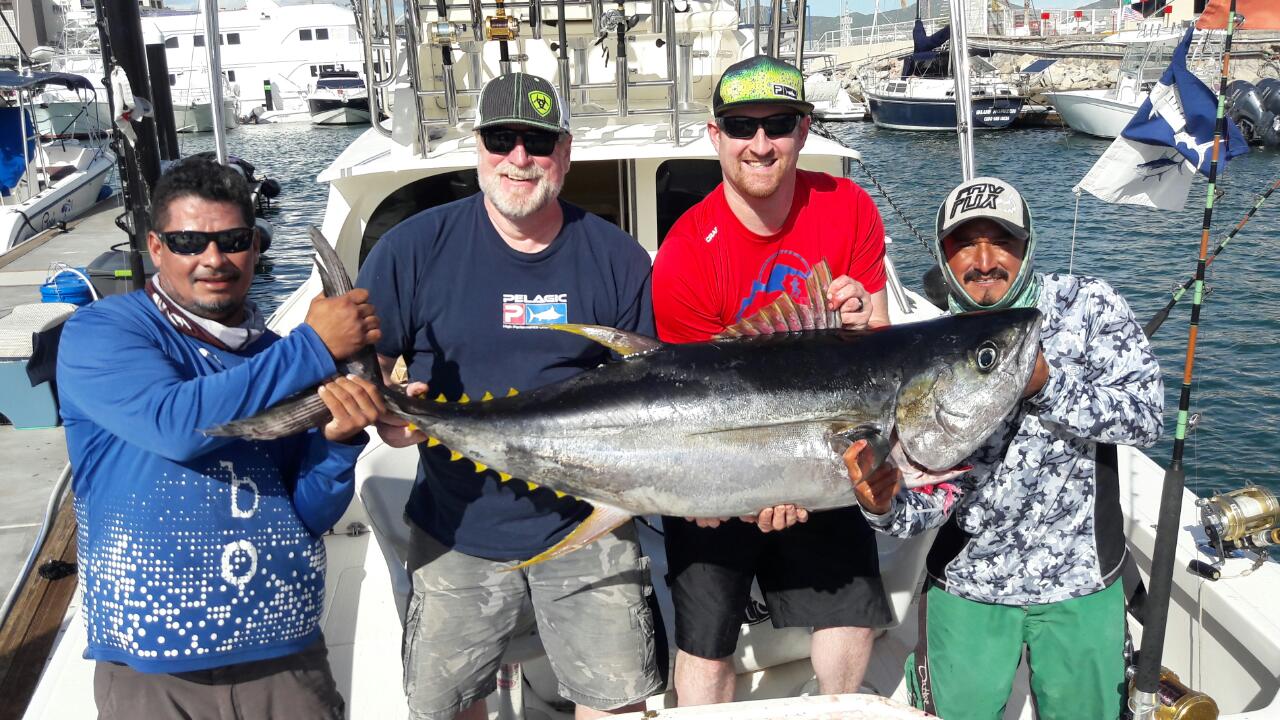 A nice 100 lbs tuna caught this week with Pisces!

Pisces 31′ Ruthless also headed to San Jaime this day and caught 19 yellowfin tuna for anglers from Kent, Washington, the Wright family. The tuna were all about 15 to 20 lbs and hit on feathers and cedar plug lures. They also landed a dorado, of about 12 lbs. on feather lure. Later in the week Anglers Lana Nogosek and Cory Pardon aboard Ruthless, this time with Captain Bruce Montano at the helm, would land a nice 20 lbs tuna of a cedar plug lure at Elias Calles area, and go on to fight another BIG one of about 200lbs! Their efforts, sadly, not enough, as they lost the fish in the end.

More dorado was caught by Ruthless the next day though, 10 in total between 5 and 20 lbs each (with the smallest 3 released) by anglers from Sugarland, Texas. The dorado hit on mackerel bait and feathers out of Migrino area. 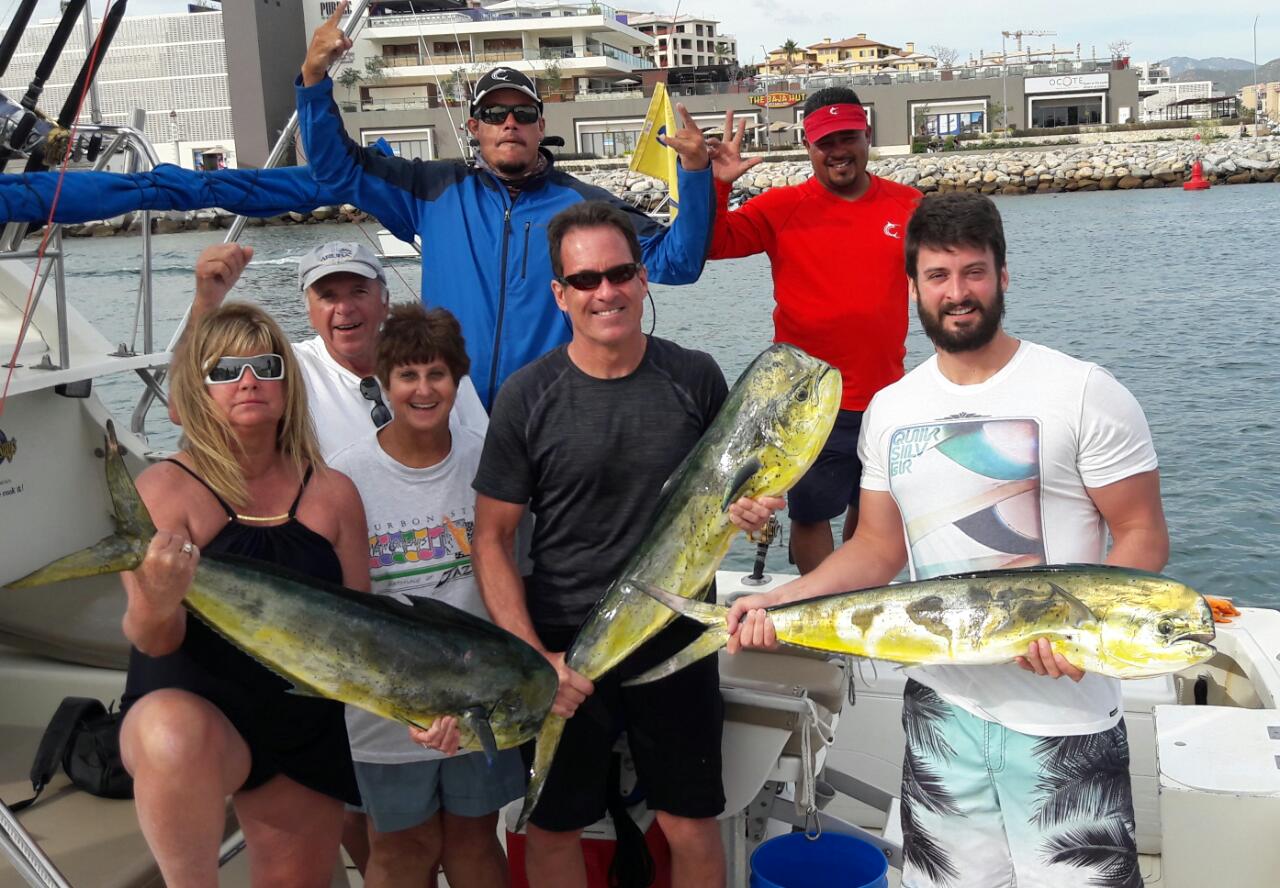 And last but certainly not least, The Pisces 35′ Valerie was one of our top boats this week, catching the most marlin on one day at the Golden Gate with 7 striped marlin released. Anglers were Bob and Chad Griggs and Jim and Ryan Penn from TX who used mackerel bait to lure the fish. They also managed to land a decent dorado of approx. 20 lbs at Las Margaritas area on feather lure.

Heading back to the Golden Gate a few days later, The Valerie released 4 striped marlin on mackerel bait and another 2 striped marlin on a different day with anglers Derek Stills and Scott Annesley aboard. The couple also caught 4 dorado between Gaspareno and Migrino as well as 6 yellowfin tuna! 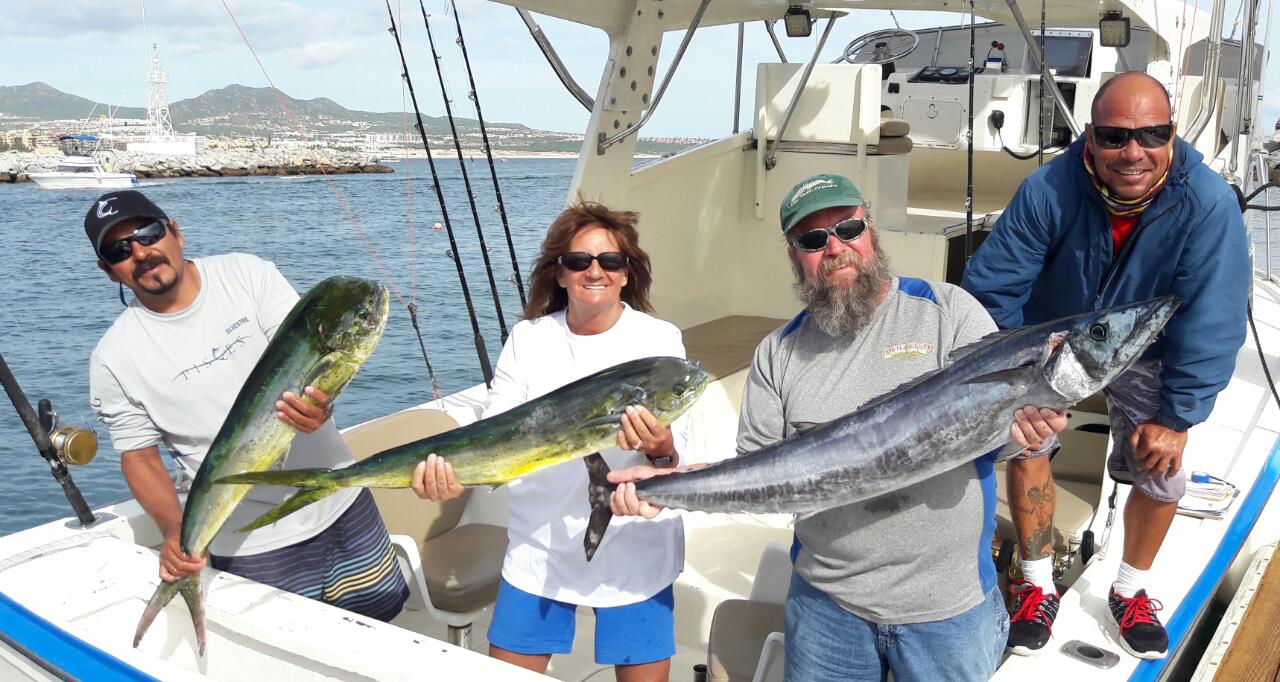 For other catches, we saw Pisces 28′ Andrea catch 2 dorado of about 15 lbs on December 13th, along with a 30 lbs wahoo which hit on a white/blue lure at La Antena. Anglers were Michael and Peggy Moore.

The next day, Pisces 28′ Adriana headed to Golden Gate and released 2 striped marlin and kept 3 grouper of about 10 lbs each. They also caught and released a thresher shark with anglers Jeremy and Leann Bentham on board later in the week along with 4 striped marlin, which ranged in size from 120 to 140 lbs each. 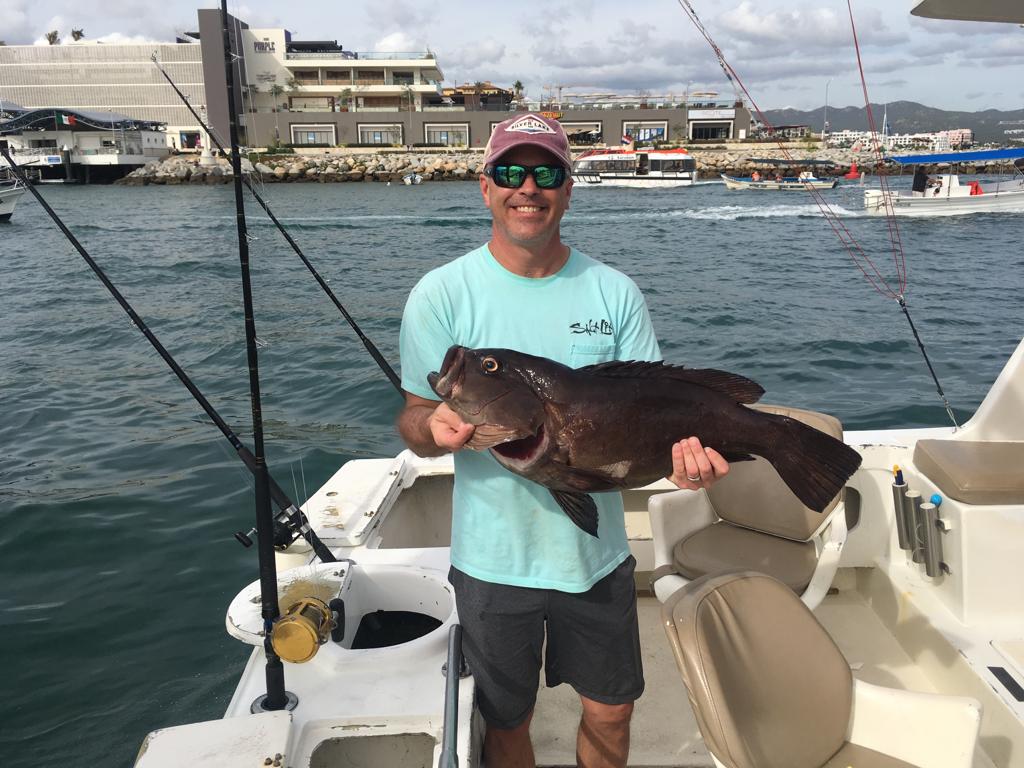