Another good week of fishing in Cabo; with nonstop epic inshore catches that have kept us busy even though the billfish have slowed.The sierra mackerel have showed up strongly, along with roosterfish and some yellowtail too. Other catches have included amberjack, skipjack, red snapper, triggerfish. Dorado have also made a little bit of a comeback, compared to previous weeks were percentages of dorado caught only being in the 1 to 2 percent range.

For marlin this week, the top boat was Pisces 31′ Rebecca, with 3 striped marlin released in one day. The marlin weighed approximately 150 lbs each and hit on caballito bait and charrito lures, fishing at the Cerro Colorado and Chawita areas.  Pisces 32′ Bill Collector also had a good day towards the beginning of the week, with 2 striped marlin released at Cabeza Ballena, only about 3 miles out. The marlin hit on ballyhoo and caballito bait, and were angled by the Kern family from Orange Beach, Alabama. Pisces 31′ Ruthless also released 2 striped marlin, this time hitting on mackerel and caballito bait out at la Herradura and the 95 Spot, with anglers from New Hampshire aboard. Later in the week the Ruthless did well again to release 1 striped marlin of about 110 lbs on caballito bait out of Palmilla, and kept 3 dorado. The dorado hit on a combination of lures (black and red) and caballito bait between Palmilla, Cabo Real and El Tule Areas on the Sea of Cortez side. The crew tagged and released the small 5 lbs dorado with a Gray Fish Tag Research Tag and kept the two other which were about 15 lbs each. More dorado were caught by Pisces 31′ Rebecca, who kept 3 dorado total of about 15 lbs each. They used mackerel and feather lures at Punta Gorda area. Anglers were Dan and Kristy Shaw from Wetumpka, Alabama. 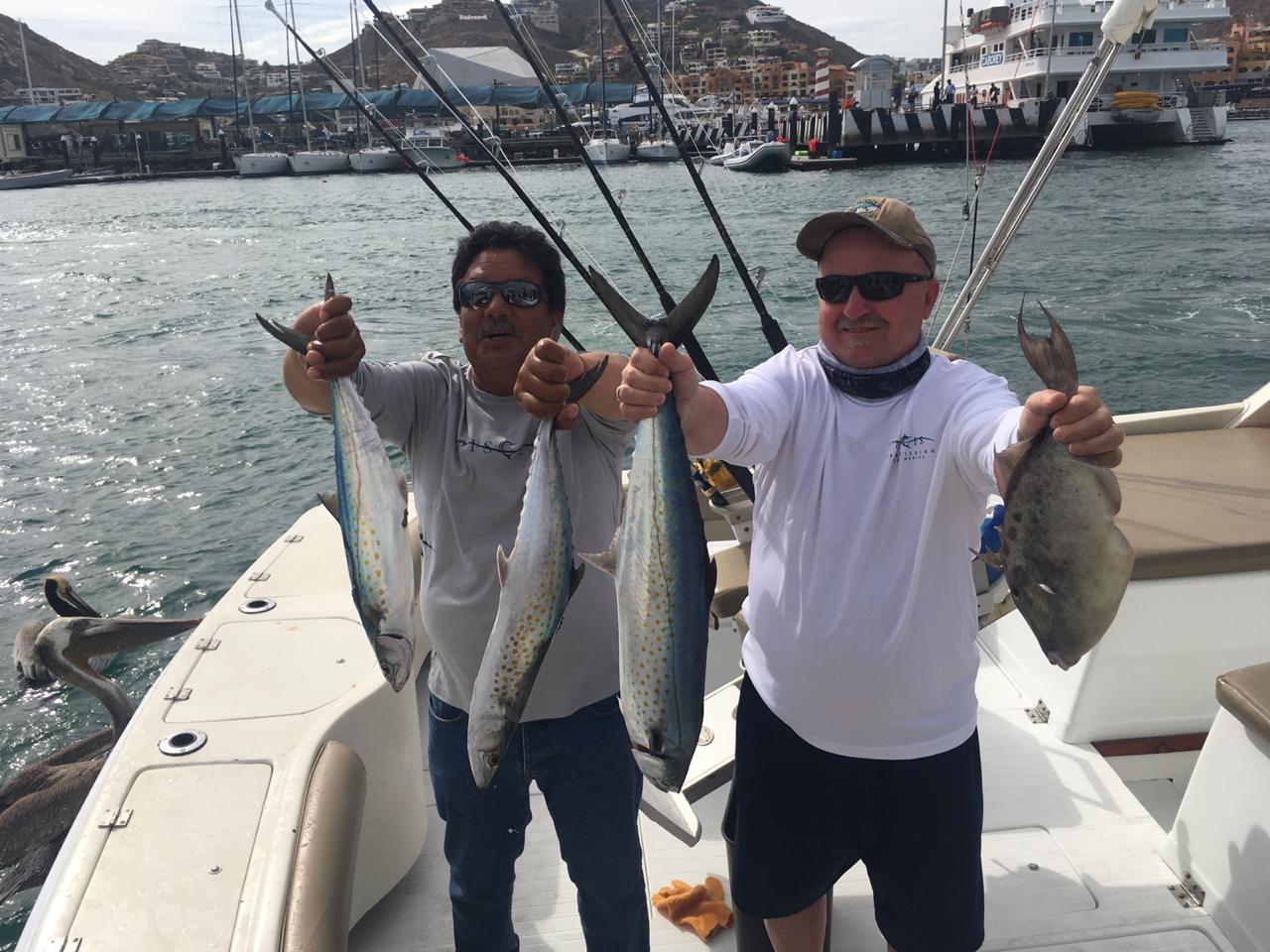 More dorado for Pisces 35′ Valerie midweek, 2 caught total, again on the Cortez side at Punta Gorda, also around 15 lbs each, hitting on caballito bait. They also did well with small game by chumming closer to shore at Punta Gorda area, landing 1 red snapper, and 1 grouper.

The Perrington family from from Minnesota had a great day on the Pisces 35′ Valerie as well, releasing a 50 lbs hammerhead shark that hit on caballito bait at Pozo Cota. They also headed to Migrino area for small game,where young anglers Jack and Lee (13 and 14 years old)  caught 15 sierra mackerel on hoochi lures. They also caught 5 ladyfish there.

Pisces 38′ C Rod also did well with sierra mackerel, catching 14 on hoochis close to Golden Gate area of about 6 lbs each. They kept 1 dorado which hit on a green lure at the old lighthouse as well, which was about 15 lbs and 2 skipjack, released, and 3 bonitas. 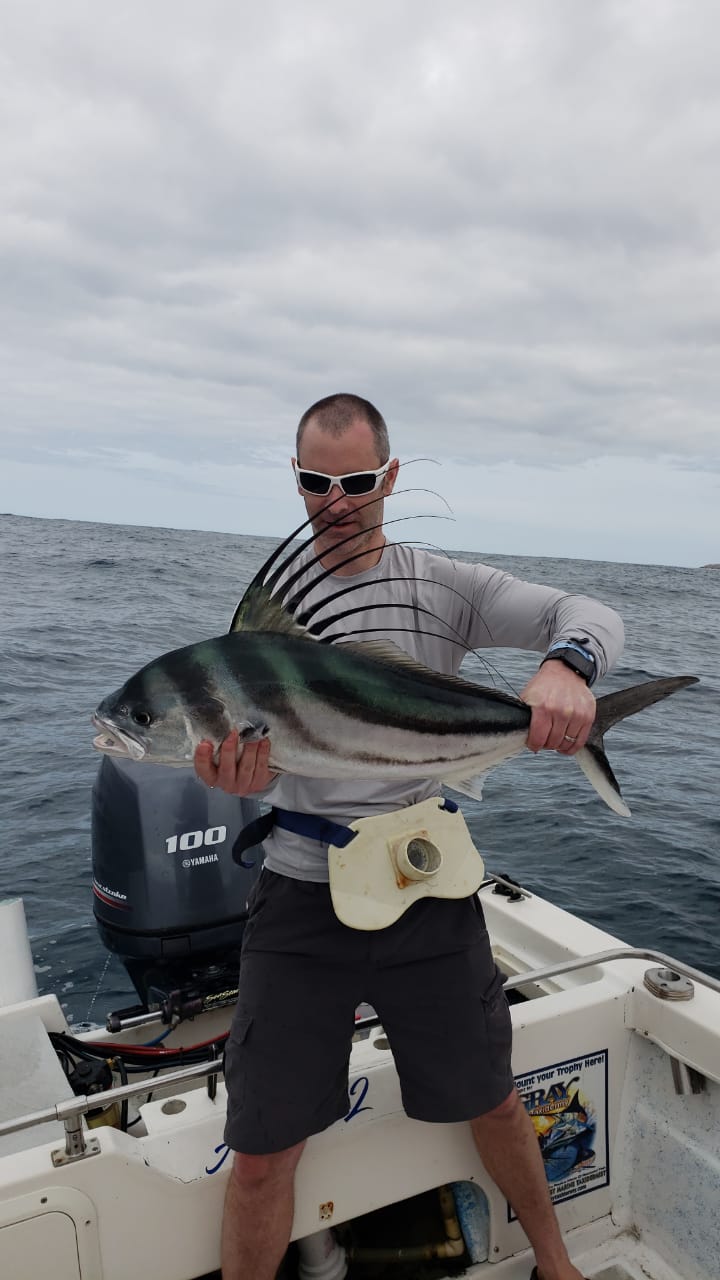 Pisces 31′ Tracy Ann really hit it out of the park this week, when they landed 30 sierra mackerel of up to 8 lbs each, close to the Golden Gate area. They also released 3 roosterfish of about 5 to 8 ls near Gaspareno, making for an epic day for anglers Jeff Graves, Louie Roy and Timothy Sheaks from Fremont, Indiana.

Later in the week, the Tracy Ann impressed again with 6 sierra mackerel which hit on hoochi lures at Gaspareno. They also released 3 roosterfish, and caught 1 red snapper, 5 triggerfish and 3 skipjacks there.

Pisces 31′ Ruthless had two good back to back days, rounding out a great week for this crew, with 12 sierra mackerel caught on hoochi lures at Pozo Cota and 1 skipjack on a half day for an all women-angler group, Jill Barber, Lisa Burnmiester and Tracy Nightingale from Indiana.

Pisces 42′ Whiskey caught 6 yellowtail, of about 15 lbs each on rapala lures and feathers, with anglers Robert Edelman, Robin Bentler and Miles Kaegi aboard doing a great job. They also caught 2 sierras and 2 jack crevalles on hoochis at the Golden Gate shore area. 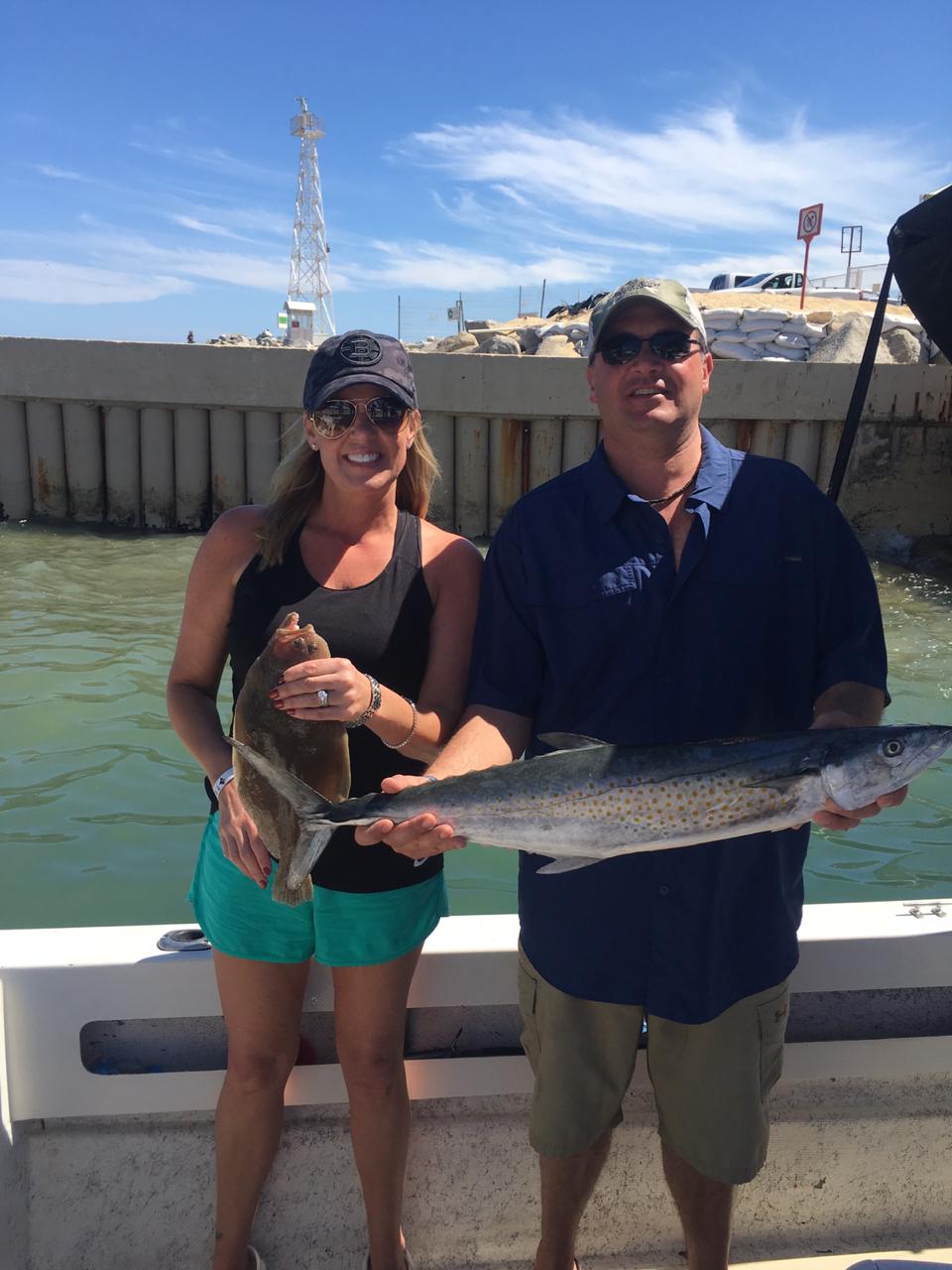 And some of the most fun this week was had on the Pisces Pangas this week, with epic catches on Pisces 24′ Panga Anamar and anglers Chris Abbob and George and Stephanie Brannan from Florida. They caught 3 sierras of up to 8 lbs each as well as releasing 4 roosterfish between 15 and 30 lb each. To top it off they caught a nice amberjack of about 12 lbs on a purple rapala lure by Rancho Solmar. Later in the week Pisces Anamar did well again with 5 roosterfish caught and released between Los Arcos and Rancho San Lucas areas, with the biggest fish weighing about 25 lbs. The roosters his ton caballito bait, as did 2 jack crevalle (5 and 20 lbs approx each). They also caught a needlefish on a green and yellow lure and a yellowtail on a pink lure. As if this wasn’t enough, they calso caught a bluefin trevally and a bonita. All fish were released except for the yellowtail. Anglers were Andrew Gonzon and Christopher Johnas from Delaware.

Another day on the Anamar brought anglers Jackson Drew, Jessy Wright and Spencer Perkins, 1 sierra catch at Cabeza Ballena area along with 3 skipjacks which hit on feathers. Plus, 4 yellowtail of about 10 – 12 lbs each, that hit on blue/white and yellow lures.

WEATHER CONDITIONS: Mostly calm, some wind on days, which created some chop.

Based on the catches of Pisces Sportfishing Fleet, written by Rebecca Ehrenberg