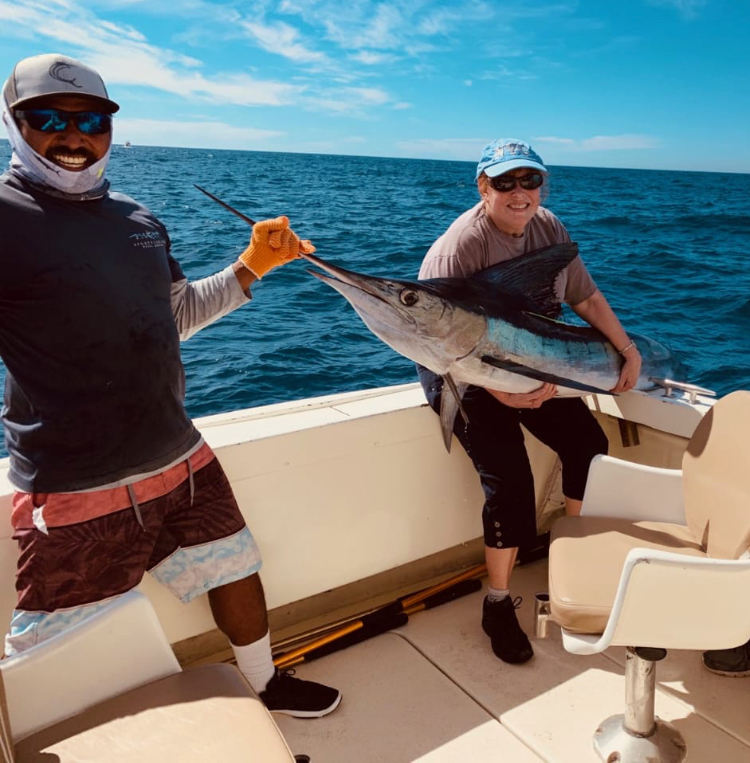 We’ve seen a few changes to the fishing from last week to this one. The climate shifted a bit and weather got slightly “colder” nothing compared to the “Polar Vortex” many are experiencing though! We’re not complaining there. However, it did seem to affect the fishing, more so towards the end of the week. All in all though, we still saw 1-2 billfish per boat consistently, with a high of up to 6 marlin released at the beginning of the week. Tuna numbers did drop quite a bit too, but we saw a few more dorado scattered in. Those that stayed inshore did well, and had some fun catches of red snapper, triggerfish and sierra mackerel, amongst others.

One of our top boats this week was Pisces 35′ Valerie and crew, who did a good job at keeping their catches varied and targeting many different species this week. February 5th for example, the crew and anglers on the Valerie did well to release 3 Striped Marlin of about 120 lbs each at the Old Lighthouse. The fish hit on mackerel bait, and were angled by Allan MacKinnon, Mitchell Graye and Ron Schneider from Colorado. Another 2 Striped Marlin were released around this same area with the Valerie and anglers from New York, while on February 4th Captain Roberto Sandez targeted tuna. They were successful, even though they made about a 40 mile haul out to the 140 Spot to find them. The four tuna caught were between 15 and 20 lbs each. They hit on cedar plugs, brujitas and feathers. Towards the end of the week, the Valerie headed for small game, close to the Golden Gate shoreline. Angler Mike McCoy had fun catching 7 grouper, 4 ladyfish, and one red snapper by chumming. 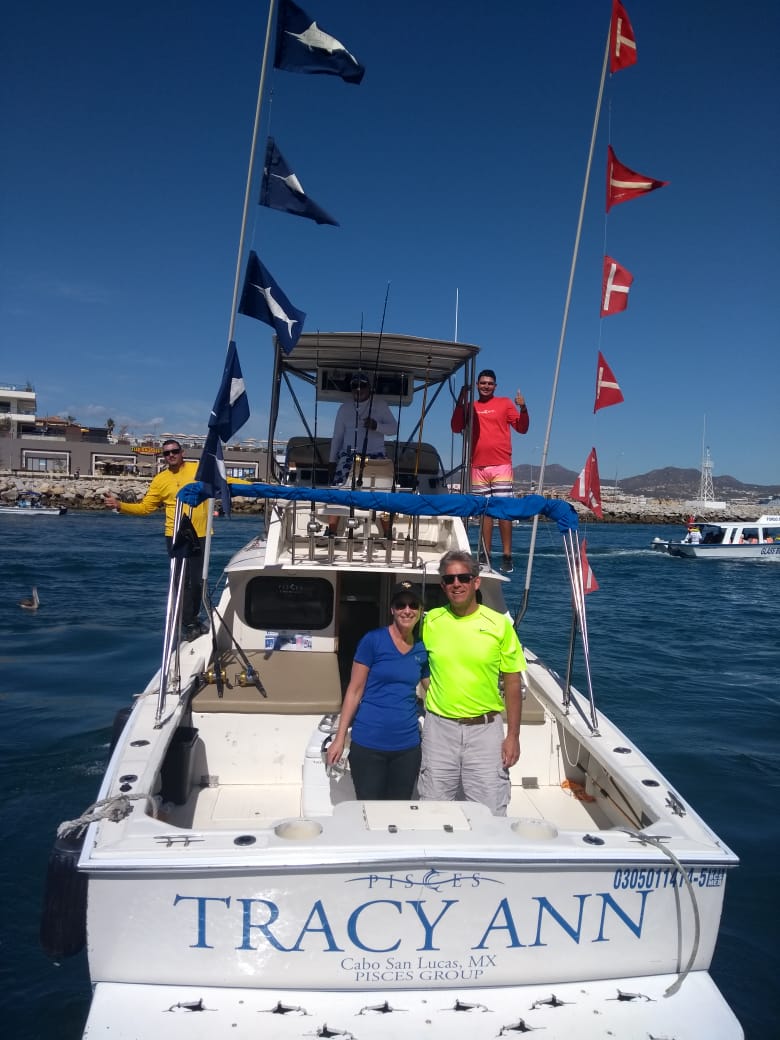 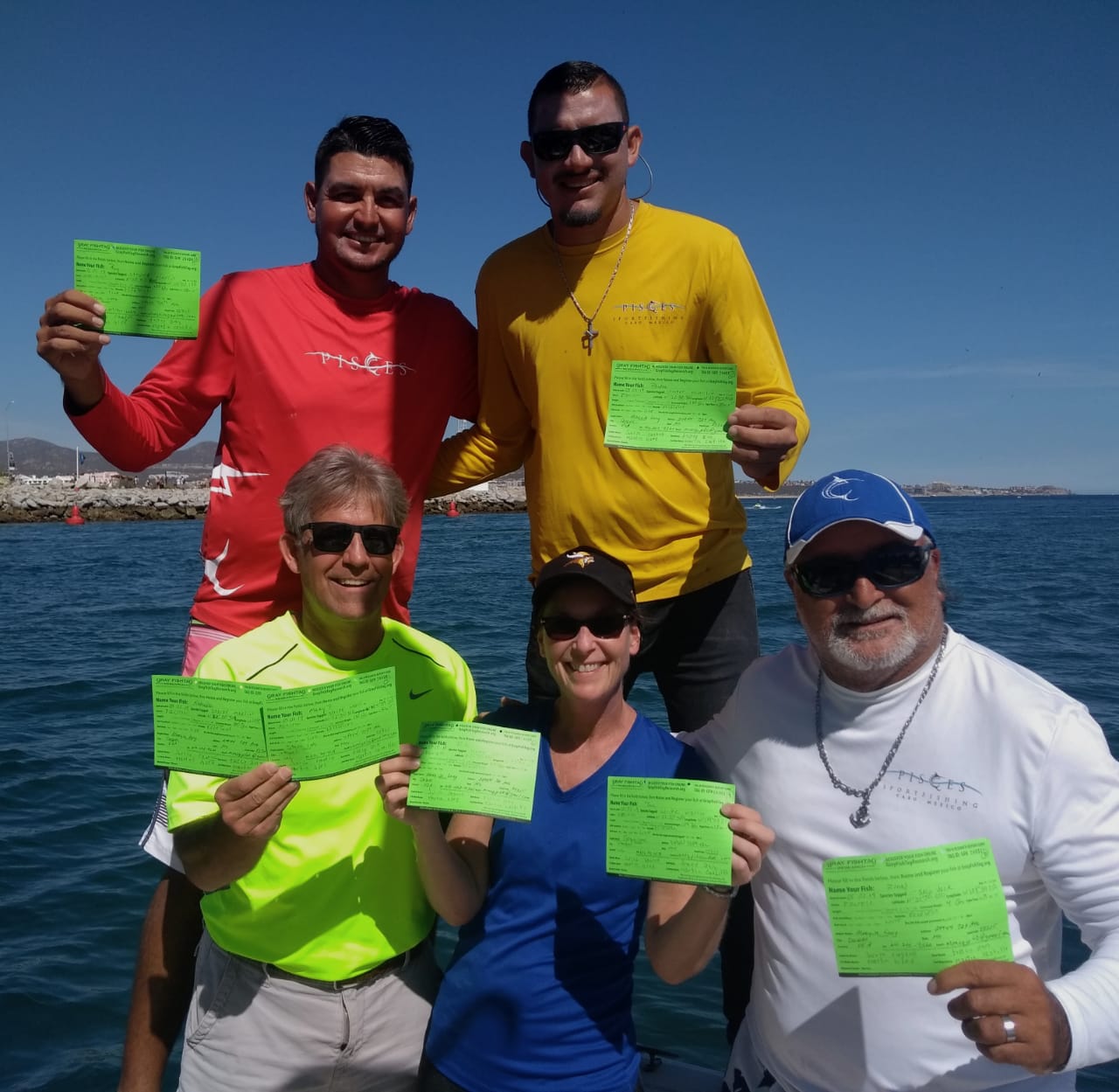 Pisces 31′ Tracy Ann also had a great week, with the most marlin released by any boat this week.  Anglers Mary Jo and Steve Long from Minnesota did a great job of releasing 6 Striped Marlin, all between 100 and 150 lbs. The fish hit on mackerel bait close to the Old Lighthouse. They also released a small skipjack, which they tagged using our newly provided Gray Fish Tag Research tags for small game. They also tagged all of their marlin, making for not only an excellent day of fishing but one that they can track and see evolve even after its over. We love working with Gray FishTag and are proud to be one of their Official Research Centers. By tagging and releasing our fish (and hopefully recapturing those tagged fish) we are getting invaluable information on the sport fish we release, that can help us do more to promote their conservation and laws to protect them. Something we have been working for, for many years here in Cabo. If you want to learn more about Gray Fish Tag Research or get involved head to their site here: www.grayfishtagresearch.org . So far, in 2019, we have already had one tag recapture (on Pisces 31′ Rebecca, who retagged and re-released the striped marlin), and we will share the info on this fish as soon as we have it!

On another day, Pisces 31′ Tracy Ann did well to release 3 Striped Marlin, which were between 120 and 140 lbs each approx., again at the Old Lighthouse. Pisces 32′ Bill Collector did well with marlin and tuna this week; releasing 1 small Striped Marlin of about 40 lbs on mackerel bait at the 160 Spot (about 30 miles out) and keeping 9 Yellowfin tuna of about 15 to 25 lbs each. Anglers were Nicholas and Pete Jr and Sr from Peoria, Illinois. 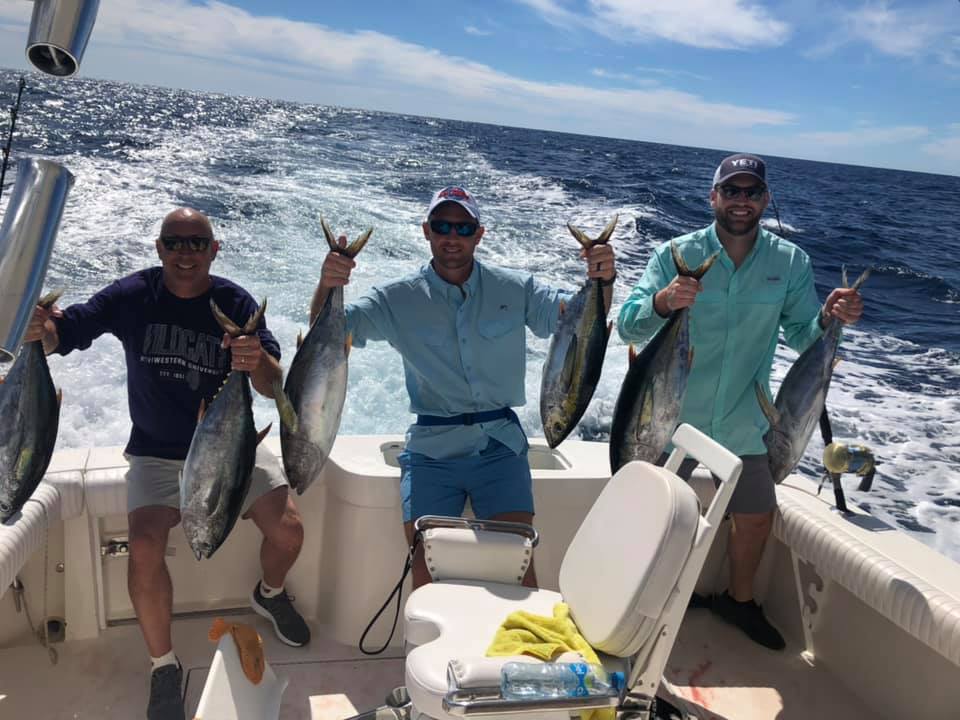 Pisces 31′ La Brisa was one of the few boats to catch dorado this week, catching 3 dorado of about 15 to 20 lbs each on ballyhoo and Caballito bait on the Sea of Cortez side between Punta Gorda and Destiladeras. Pisces 28′ Andrea also caught a dorado this week, a 15 pounder, close to Chilean area. They also caught 1 Sierra Mackerel, 1 Red Snapper and 2 Triggerfish by chumming there. Anglers were the Elmers and Murphy’s from South Carolina. And Pisces 25′ Panga Poseidon released an approx 25 lbs roosterfish on the Pacific side, on mackerel. Angler Richard Cook also caught a Pompano of about 10 lbs. 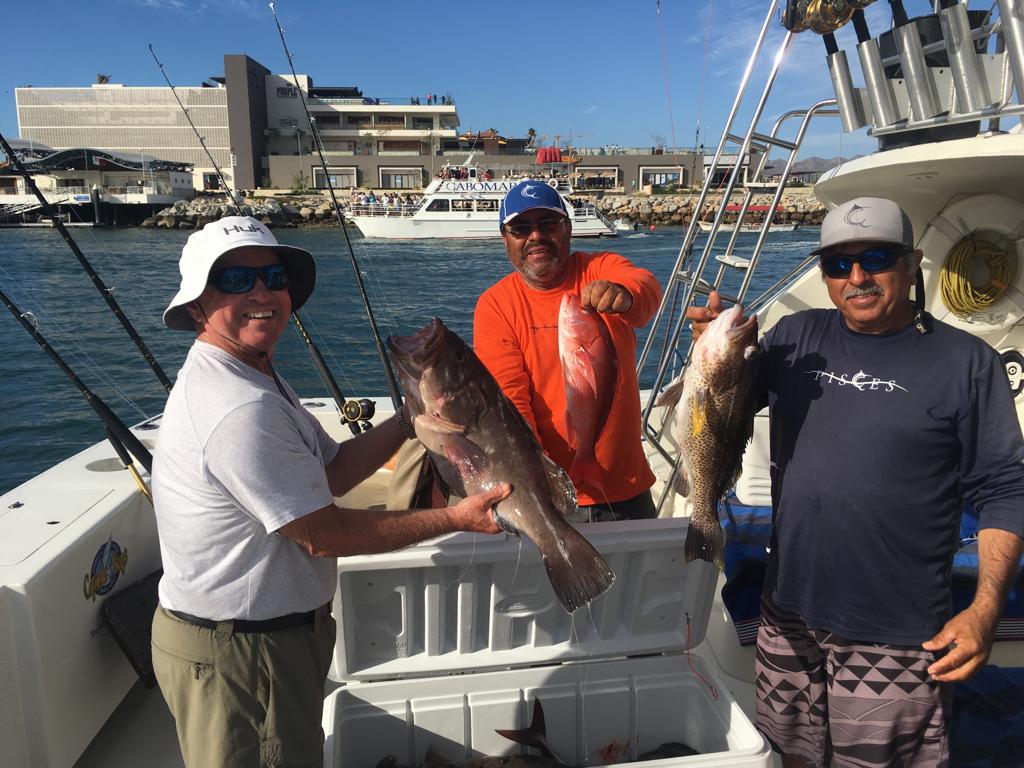 Mike McCoy with his catch on pisces 35′ Valerie

Written by Rebecca Ehrenberg, Based on the Catches of Pisces Sportfishing