This week we saw dorado catches increase, topping billfish, which we hadn’t seen happen this year yet. The season is beginning to slowly change, and we are also seeing the tuna pick up a just a bit. 132 tuna were caught this week, although only 22% of boats caught them, but this gives you a better idea of what the tuna buzz is looking like in Cabo at the moment. Boats are still going very far to find them though, not many will go the distances Pisces boats go to catch fish, guaranteed. Small game catches are still strong, with Pisces Valerie making our list for top boat for small game this week. 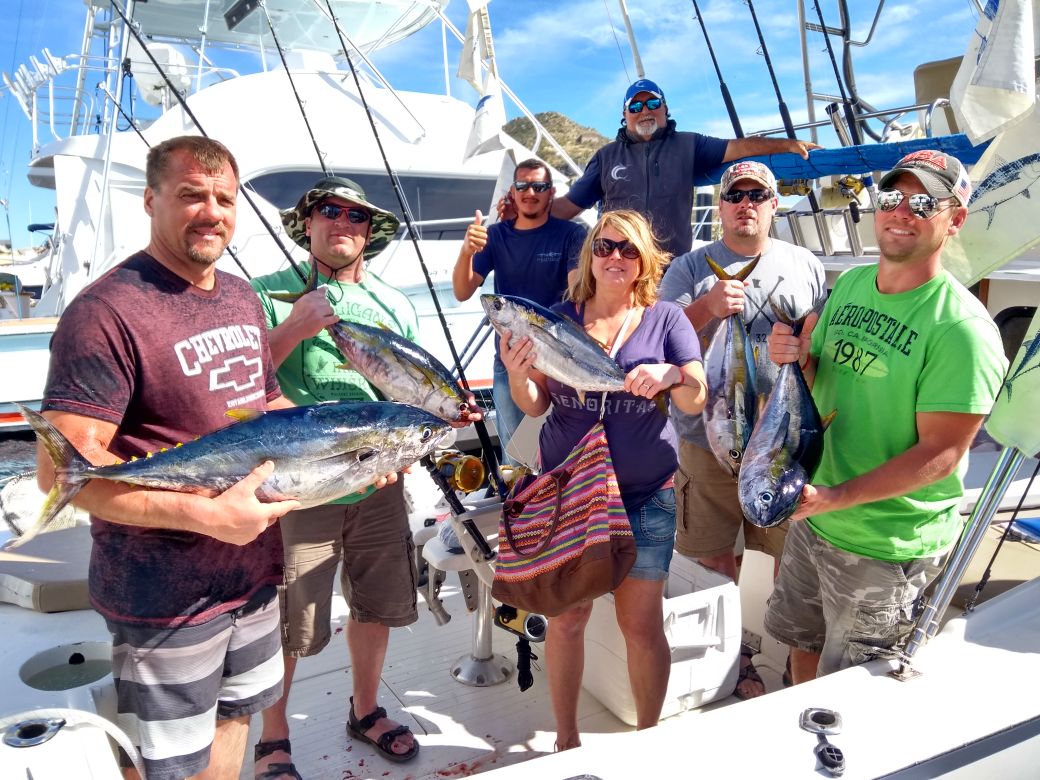 Anglers from Minnesota showing off a few of their 19 tuna caught aboard Tracy Ann. They also released 1 striped marlin.

The week started a little slow, compared only to last week, as on Feb 10th, every boat that went out caught 1 to 2 marlin each, but not much of else. Two days later though, we had boats like the 31ft Pisces Tracy Ann catch 1 striped marlin and 19 yellowfin tuna. Anglers from Minnesota, did a good job at landing their fish out about 35 miles out by San Jaime Bank. The marlin hit on live mackerel bait, weighed about 100 lbs and was released. The tuna hit on cedar plugs and averaged 15 to 30 lbs each. Tracy Ann also went above and beyond to find tuna for anglers Amy and Tom Norris, as well as Will Middleton, who targeted this fish specifically, by going out 42 miles to San Jaime. It paid off though, they landed 14 tuna, of about 8 to 10 lbs, on feather lures and cedar plugs.

Pisces 31ft La Brisa also did well to catch 2 striped marlin and 1 dorado close to shore near Golden Gate later in the week, using mackerel bait to lure all fish. Anglers from California released both 130 lbs marlin (aprox) and kept the 10 lbs dorado. 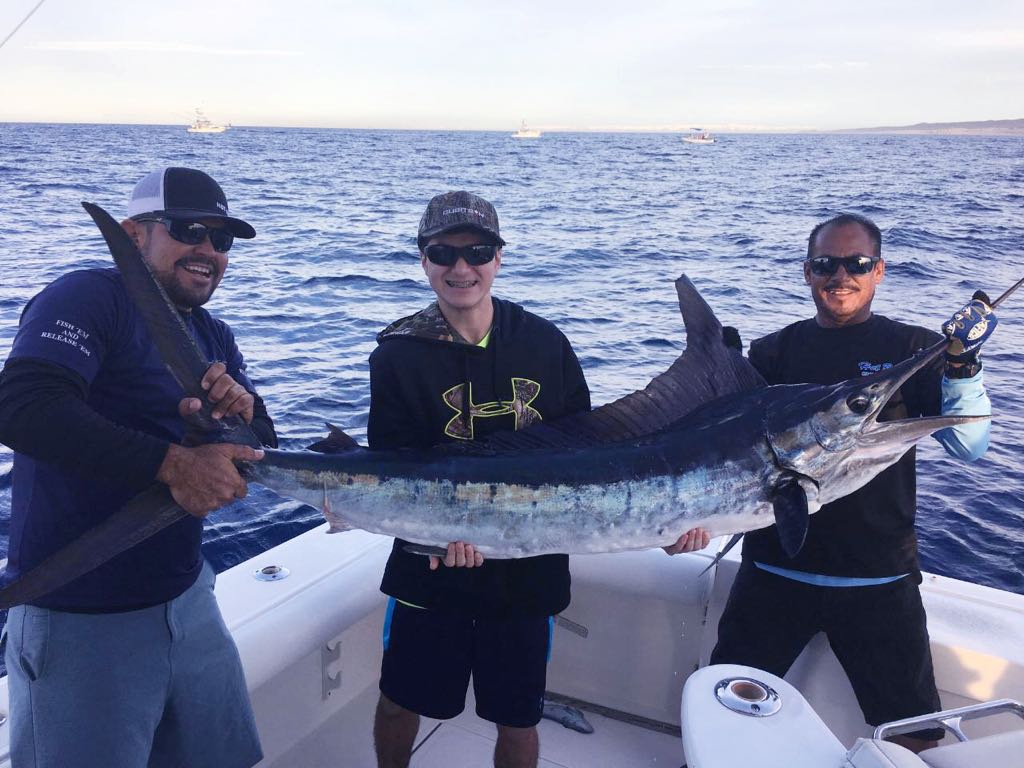 Pisces 42ft Yahoo impressed with 3 striped marlin caught, the most out of any boat on this day, as well as 2 dorado! The marlin were all released and weighed between 120 and 150 lbs each; the dorado weighed about 15 lbs each. All fish hit on mackerel bait out at Golden Gate and were caught by the Martin and Saville families from Delaware on February 16th. The previous day they fished on our other 42ft boat, the Pisces Hot Rod, and also did well to catch 1 striped marlin and 4 dorado.  The marlin was caught just outside of the old Lighthouse on a purple lure, and the dorado were caught A great two days of fishing for this group!

Panga fishing was also good this week, catching sierra, rooster fish, grouper, dorado and even marlin. A good example of this was our Pisces 24ft Panga, Captained by Rafael Lopez, who along with angler family, the Kern’s, did a great job to land 3 dorado out on a half day at Palmilla. The dorado, which weighed between 15 and 20 lbs, hit on ballyhoo bait and feather lures. Pisces 25 ft Panga and anglers from California caught 1 striped marlin and 1 skipjack, both released. The marlin weighed about 130 lbs and hit on mackerel bait out by the Old Lighthouse. 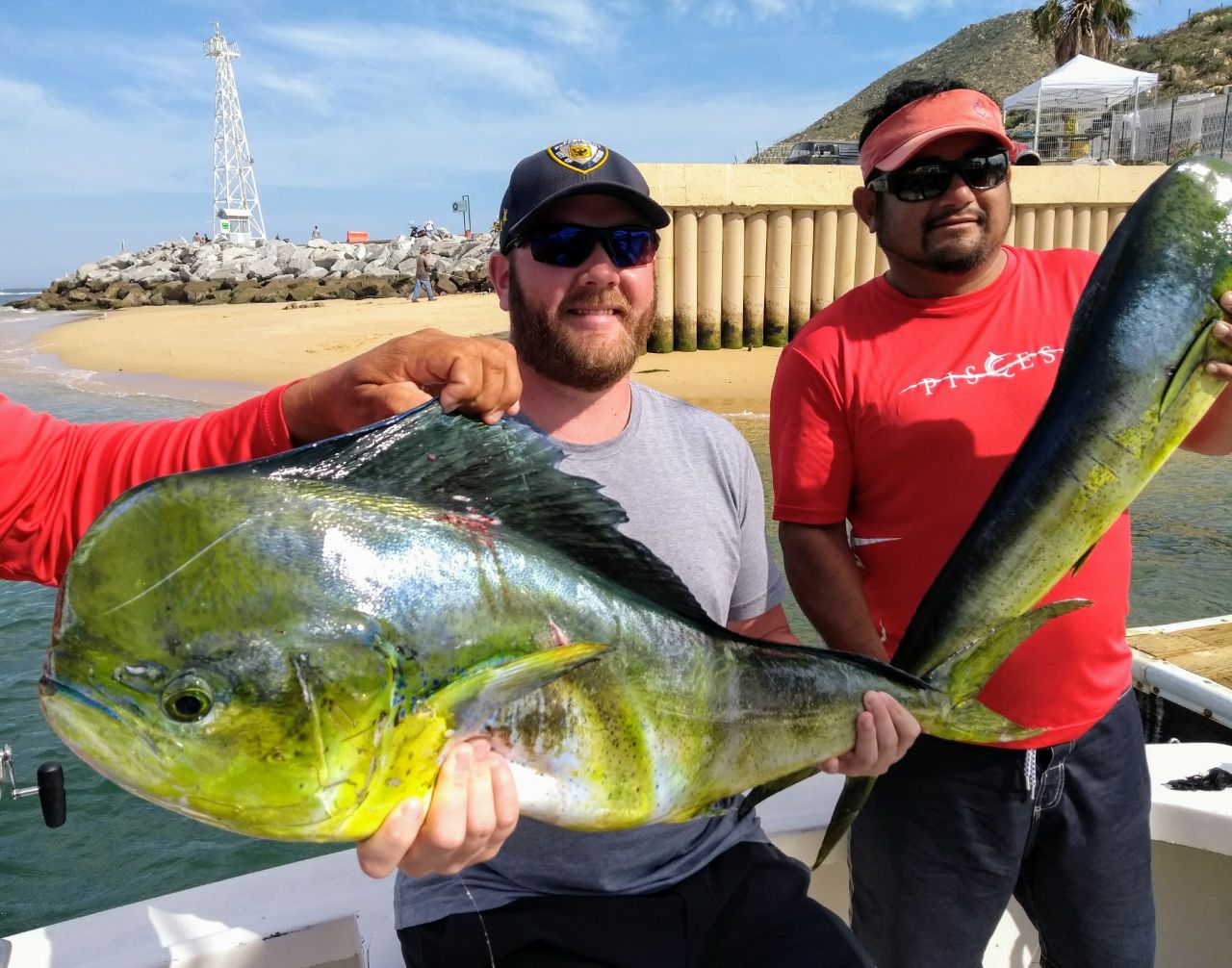 And as mentioned earlier, top boat for small game was the Pisces 35ft Valerie with loyal Pisces angler, Mike McCoy from Iowa, making a great team with Captain Roberto Sandez and Mate Silvester, totaling their catch at 44 fish! They landed 19 sierra of about 8 to 10 lbs each, 1 small amberjack (released), 1 grouper of about 4 lbs, 1 jack crevalle of about 15 lbs, 8 red snapper (some released) averaging 5 lbs and 14 triggerfish! (some triggers released as well). All this and they were back at the dock before 2 pm. They caught all their fish by chumming at their secret sweet spot outside of La Palmita area.