This week the marlin numbers jumped back up again, with 70% of boats catching striped marlin. Dorado numbers remained strong, but the tuna was nonexistent. Fishing was a little tougher this week, not as consistent, but those that did find fish, found many, with top boats catching up to 6 striped marlin each. We also had a spectacular catch, of one of the rarest fish we’ve ever encountered, only seen twice before in the 40 years of our fleet’s existence.

Our top boat this week was Pisces 28ft Adriana, who showed the most consistent fishing this week, landing fish every day. They also caught a vast array of different species. For example, anglers from Georgia, the Wright’s and Raymer’s, caught and released 1 striped marlin of about 150 lbs and 1 dorado of about 10 lbs, both out at Golden Gate on mackerel. They also caught 3 grouper, 4 red snapper and 4 triggerfish of about 4 lbs each by chumming closer to shore at Golden Gate area. Pisces Adriana caught marlin all days, except for one. Totaling 7 stripers caught in the week. 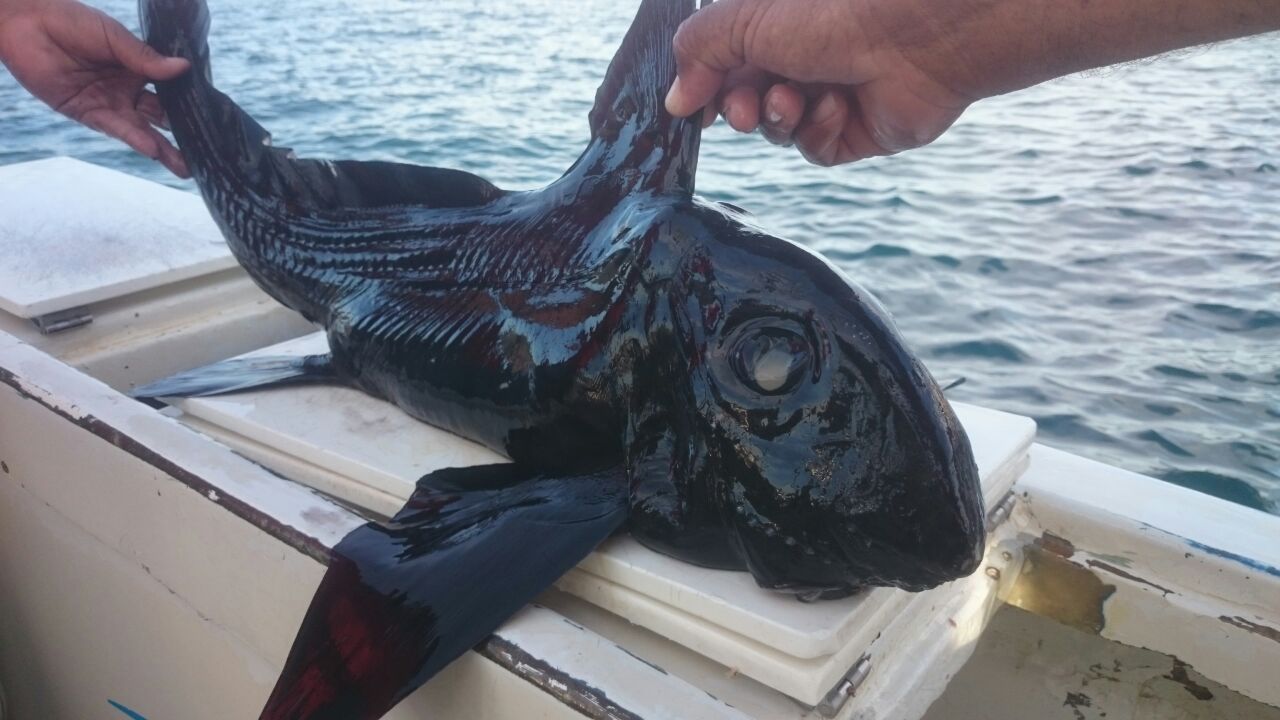 The pointy-nosed blue chimaera, a species of “ghost shark”, found adrift by Anglers and Crew aboard Pisces 28ft Andrea.

Our other 28ft, Pisces Andrea, caught one of the rarest fish this week, we’ve only seen it twice before in the 40 years of our fleet’s existence. Anglers from Minnesota headed out towards Pozo Cota area and caught 4 sierra of about 3-5 lbs each, as well as 1 red snapper of about 8 lbs on mackerel bait. They also caught upwards of 30 triggerfish by chumming, many of which they released. The crew then spotted a fish floating by and upon closer inspection realized it was believed to be a pointy-nosed blue chimaera, a species of “ghost shark”. As Radio NZ describes, Chimaeras are ‘perhaps the oldest and most enigmatic groups of fishes alive today.’ Their closest living relatives are sharks, but they parted evolutionary ways about 400 million years ago. Chimaeras are deep sea sharks that are known by a number of different names, including spookfish, ratfish, rabbitfish, elephantfish and ghostsharks.The name chimaera (or chimera) comes from Greek mythology, in which it was a fire-breathing monster composed of various animals: a lioness, a snake and a goat. You can see why in the picture… Anglers Allan and Donald Kodet, Lee Person and Max Bauer are now a few of the only people in the world to have seen this fish in person. The fish was donated to local scientists for research purposes. 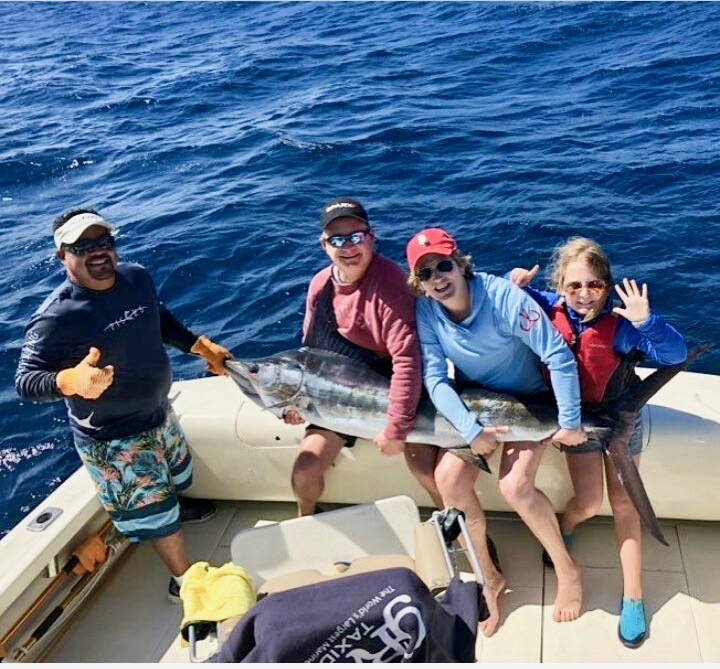 As for marlin catches this week, the Pisces 31ft Rebecca, caught the most striped out of any other boat on Wednesday, with the Hayes family, Chris, Kelly, and their young daughter Elizabeth catching and releasing 6 stripers total. They caught all marlin on mackerel bait out at Golden Gate, which averaged about 130 lbs each. The family fished previously in the week aboard 31ft Pisces Ruthless, catching and releasing 3 striped marlin of about 120 and 140 lbs each, again out at Golden Gate on mackerel. They also caught 2 red snapper and about 15 triggerfish by chumming closer to Migri?o. A total of 9 striped marlin for this family in two days, as well as some lunch and a few to keep in the freezer, not bad!

Pisces 32ft Billcollector did well this week to be the only other boat to catch 6 marlin in one day.  On February 18th, anglers from Louisiana, Gary Bonner, George Ackal and Nick and Tyler Girolamo caught and released their marlin out at Golden Gate on mackerel bait. With the largest weighing about 150 lbs. They also landed a nice dorado of about 20 lbs on mackerel. 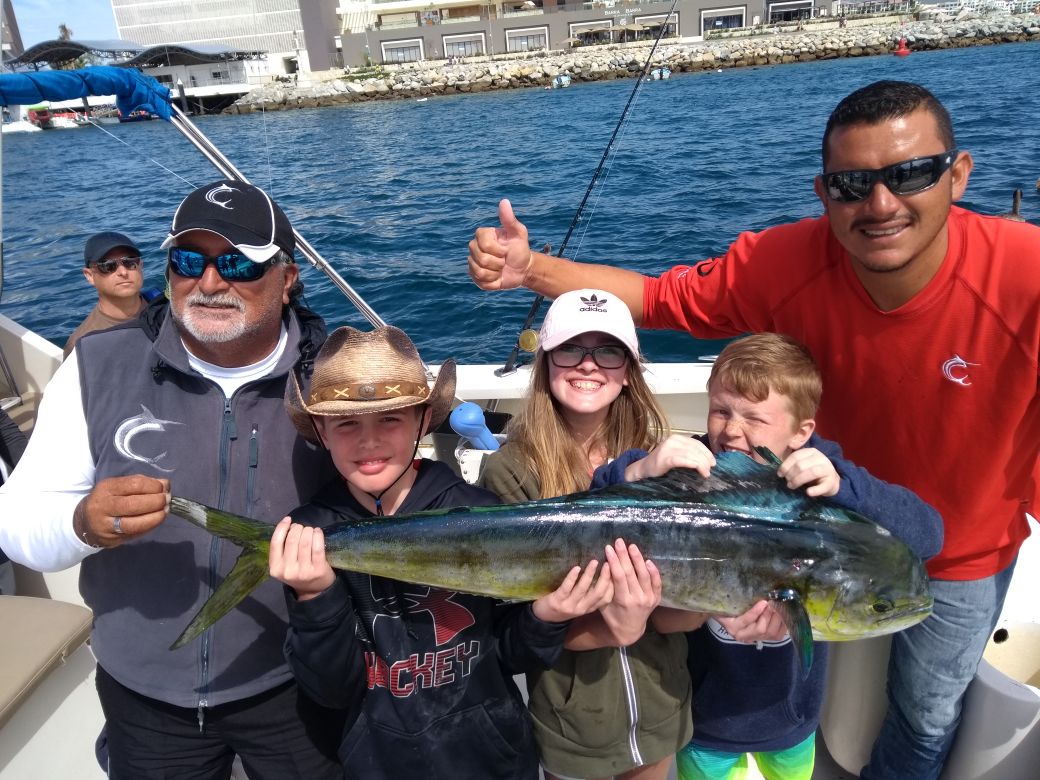 Pisces 42ft Yahoo has been very consistent this month, with top catches every week. The Saville and Martin families had a great day, catching and releasing 4 striped marlin out at Golden Gate on mackerel. The marlin weighed between 120 and 160 lbs each. Later in the week, anglers from Texas caught 5 striped marlin and 2 dorado. The stripers were caught out at Golden Gate on mackerel and weighed between 130 and 140 lbs each. The dorado were also landed on mackerel and weighed about 18 lbs.

And last but not least, Captain Lupe proved why it pays to have a nice and very fast boat. Pisces 48ft Listo and anglers from Texas fished only from about 7 am to 12 pm, and still managed to catch and release 2 striped marlin out at Golden Gate (about 23miles up the coast and 10 miles out). The marlin weighed between 110 and 130 lbs each and were caught on mackerel bait.

WEATHER CONDITIONS: Mostly calm with a few days with rough seas in the early morning.