Great weather and great fishing in Cabo this week, with 63 out of our 65 boats catching fish. Marlin numbers are still the strongest with Golden Gate being the go-to spot for odds at catching numerous billfish in one day. More dorado have been showing up there as well, and tuna has been showing up fairly closer in than last week – although many boats still have to go out several miles to find them. Other species such as grouper, snapper, rooster fish and sierra are being caught closer to shore.

The Pisces 31ft Rebecca started off strongly with the only blue marlin caught by any boat this week. Anglers Greg and Jack Sullivan from Tucson caught and released the beautiful 500 lbs (aprox) blue on ballyhoo bait out from Las Margaritas. The Rebecca was Captained by Rosendo Gomez, who is usually on the 31ft Tiburon, but was covering for J.R. this day. They also caught and released 2 striped marlin of about 130 lbs each, which they landed on mackerel bait at Golden Gate. 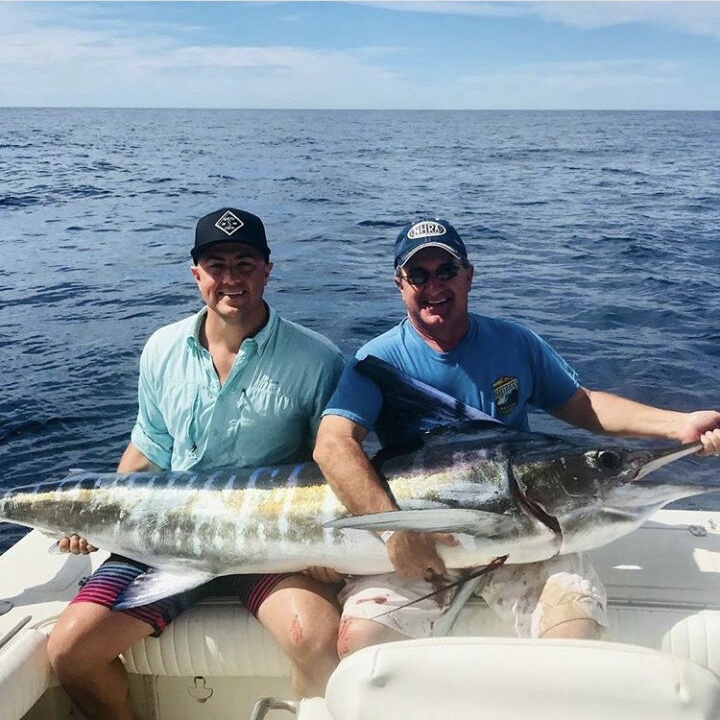 And with an amazing introduction to the fleet, Pisces BajaMark 27ft Boston Whaler, Captained by Luis Lieras, caught 6 striped marlin that ranged from 100 to 140 lbs each. Anglers from California, the father son duo, Andrew and Dan Avila, released 5 of the marlin, which they landed on mackerel bait out at Golden Gate. This was not only an epic day of fishing, but one that was even more special for Andrew, as this was a surprise trip arranged by his dad for him to catch his first marlin. Well, they did more than just that, as they also caught 1 grouper of about 12 lbs, 8 red snapper, and 3 triggerfish, by chumming closer to shore at Golden Gate area. Pretty hard to beat! 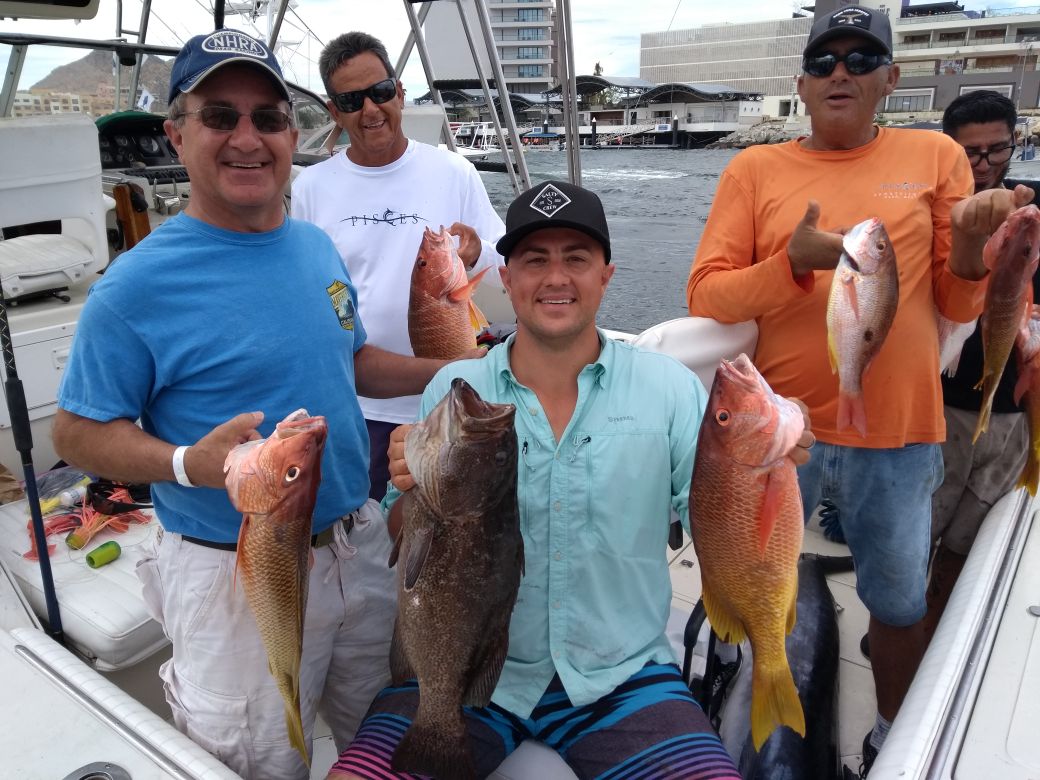 Andrew, Dan and 27ft BajaMark crew showing off some of the rest of their catch for the day,  a few snapper and one grouper pictured here.

Pisces 28ft Adriana also had luck this day, by catching 6 striped marlin as well, releasing them all; with the biggest being about 150 lbs. Anglers Greg Lien and Brian Jablonski from Minnesota also caught 3 grouper of about 15 to 20 lbs out at Golden Gate by chumming.

February 5th, Pisces 42ft Yahoo and anglers from Massachusetts caught 3 striped marlin, two of which were about 130 lbs and the other about 170 lbs. A very nice sized striper indeed, one of the biggest we’ve seen this year.They were all released out at Golden Gate. Earlier in the week the Yahoo targeted dorado specifically, and found 5 of them, ranging from 10 to 20 lbs each. They hit on mackerel bait and ballyhoo out at Las Margaritas and Pozo Cota areas. 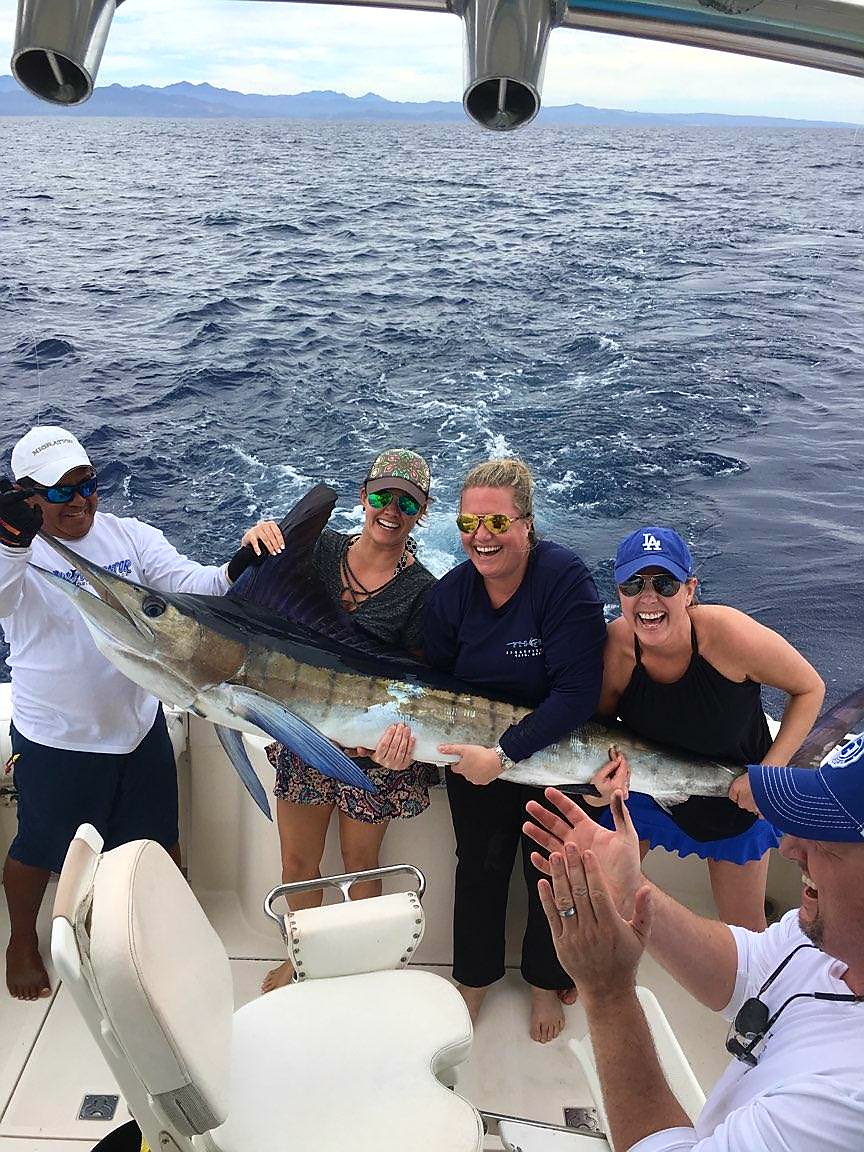 Karen and Jeremy LaMontagne and their friends, the Lamb’s and Davis’, had a great day aboard the Pisces 32ft Billcollector. They caught and released 2 striped marlin of about 130 and 150 lbs out at Golden Gate on mackerel, as well as 3 dorado of about 10 and 15 lbs each. The dorado hit on feather lures and mackerel out at Las Margaritas. More dorado and some tuna for Billcollector with anglers from California on February 5th. The Mangieri family caught 4 dorado total, on live bait out from the Old Lighthouse, as well as 4 football sized yellowfin about 20 miles out from the Lighthouse.

Captain Erick Orozco of the 42ft Pisces Hot Rod also had a successful‘day, although he had to go out 30 miles out to the 180 Spot to find them. Anglers from Texas caught 11 of them, all on feathers and cedar plugs. The tuna ranged in size from about 10 to 15 lbs each. 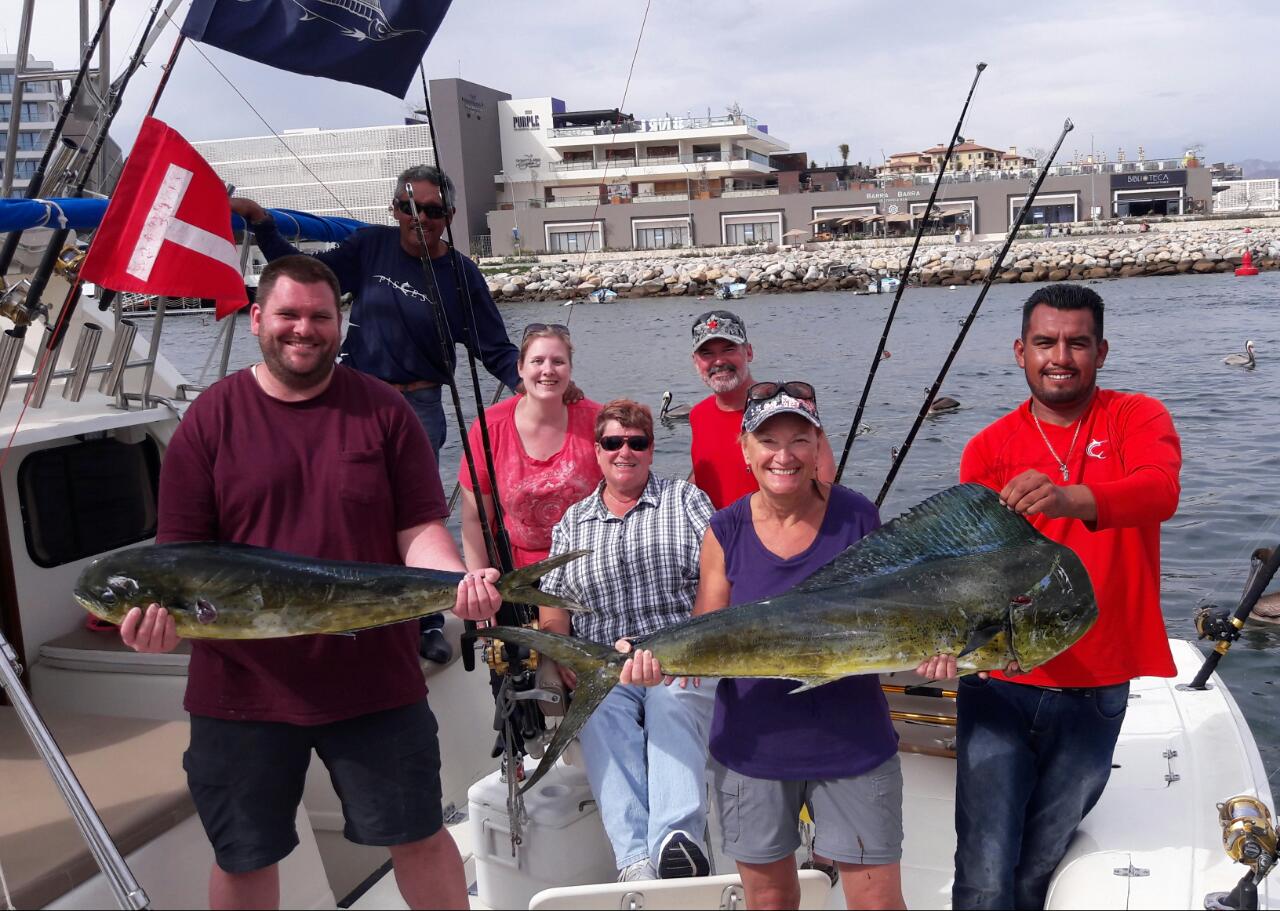 Anglers aboard the Rebecca showing off two beautiful dorado catches

And last but not least, the Pisces 35ft Valerie caught 5 dorado of about 15 and 20 lbs on petrolero lures out at San Jaime. They also landed the most tuna out of any other boat this week, catching 25 yellowfin total. The tuna were between 10 and 15 lbs and hit on cedar lures out at San Jaime. Anglers were Dan Herbst, Stan Sargent and Mike McCoy from Iowa.

Total catches for Pisces boats this week were: 71 marlin, 164 tuna, 79 dorado, and 160 other, with all catch limits being respected.

LOCATION: Golden Gate, Las Margaritas, Old Lighthouse and out 20+ miles for most boats looking for tuna.