It’s a successful week of fishing once again for us in Cabo. Yellowfin tuna numbers have risen a bit more and are holding steady, and to our delight, some of the bigger size fish are still around, even if found far offshore. The marlin bite at the Finger Bank keeps going strong and we’re wondering if it will ever let up! We’re not complaining though, as the catches are still in the double digits up there, on average 15 marlin per boat, with especially good days looking at almost 30 stripeys each. Small game this week has included roosterfish and grouper, mostly. 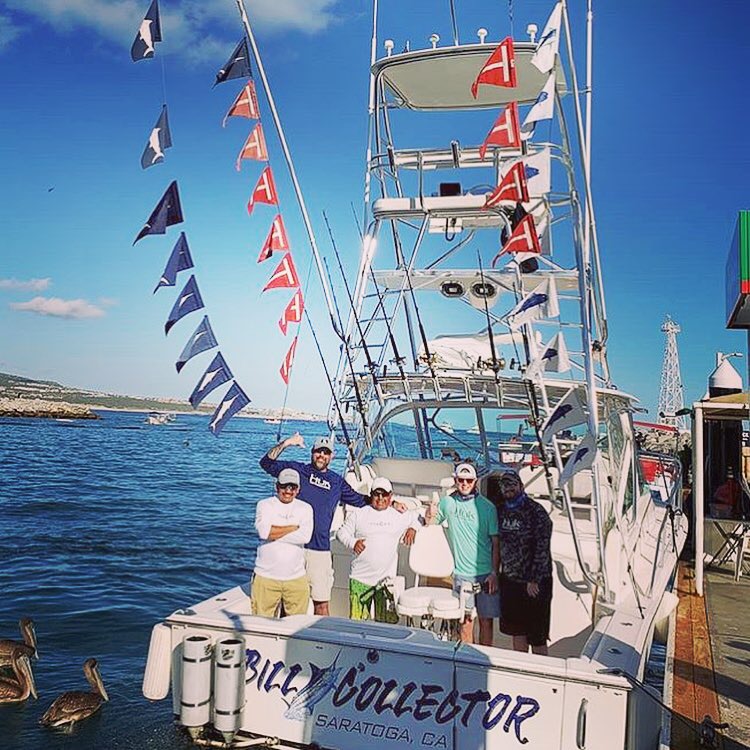 Ed, Matt and Eddie, showing off their flags from a successful day of fishing on the Pisces 32′ Bill Collector!

Return angler Ed Johannes from Rochester, New York decided to bring his two boys Eddie Johannes and Matt Driscoll with him for an epic father-son trip aboard the Pisces 32′ Bill Collector; which they hoped would include a first ever striped marlin for Matt. Well, they got that one and much more. Here’s the story in Ed’s own words:

“Short description of our day…. Left for the Finger around 6:30 aboard the Bill Collector, 2 hours into the run we ran into a huge school of feeding porpoise… hundreds and hundreds of them all sizes jumping and working schools of bait. A mix of birds and tuna were just exploding all around us as Esteban set rods. Seconds later we were doubled up, then tripled up. As fast as we could get fish in the boat we were hooked up again. Tuna are so much fun…. after we got our fill of tuna 8 for 9 within 20 minutes we powered up and continued North until we reached the Finger.

Within seconds of reaching our destination we were tripled up on marlin!! Birds, bait balls, marlin, fish jumping everywhere! It was like something you only see on TV fishing shows. Juan was a master dropping us right on top of everything and Esteban followed up with quick hook sets. Two and a half hours felt like it went by in minutes as we had fish after fish after fish successfully being released boat side. We could have fished till nightfall if our bait and arms didn’t give out.. All in all we went 8 for 9 tuna and 18 for 21 striped marlin!!!! We will be back!  Thank you so much for making a trip of a lifetime!”

Abbi Milsci from Texas fighting one of 17 Striped Marlin she caught and released on Pisces 42′ Calliente. Awesome!

And just mind-blowingly impressive is solo female angler Abbie Milsci from Texas, who decided to target marlin on Pisces 42′ Caliente. She went all out, and after only 2 and a half hours of fishing, she decided she’d call it a day, as she had single handedly caught, tagged and released 17 striped marlin. That’s one striped marlin released every 8 and a half minutes! What a champ! Congratulations for an epic day to Abbie and the awesome Pisces 42′ Caliente crew.

Again this week we saw Pisces 52′ Free 2 Play perform with malrin releases. Their top producing day they hit the dock with 27 Striped Marlin release flags, suing mackerel bait at the Finger. On another day they caught  and released 18 striped marlin! A great job by anglers and crew aboard. 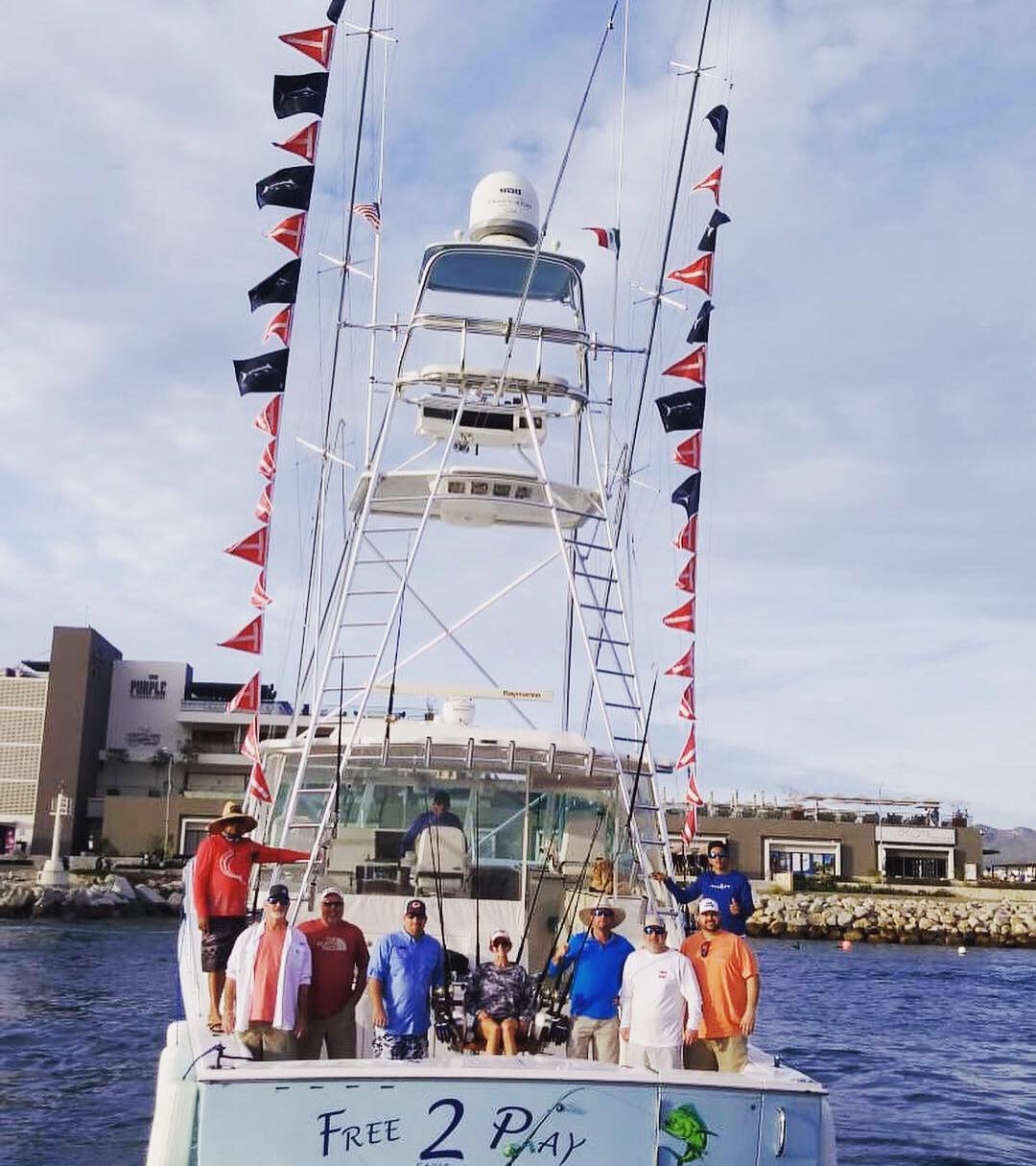 Other marlin catches nearby included up to 4 marlin per boat. Some of our outstanding catches this week included Pisces 31′ Tiburon and anglers Carson Hatch, Chris Jackson, Dennis Day, Jason Steiner, Jaxon Penrod and Marty Wilder releasing 5 striped marlin of up to 100 lbs each. They used weighted mackerel bait at the Old Lighthouse. The Tiburon closed out the week with 4 striped marlin released on Friday at Golden Gate, using mackerel bait again. Pisces 28′ Andrea also released 4 striped marlin with anglers the Hancock family on board.  Pisces 35′ Valerie also did well, releasing 3 striped marlin between 80 and 130 lbs each, on mackerel bait, at Golden Gate by anglers Anne and David Rogerson and George Church from Delaware. 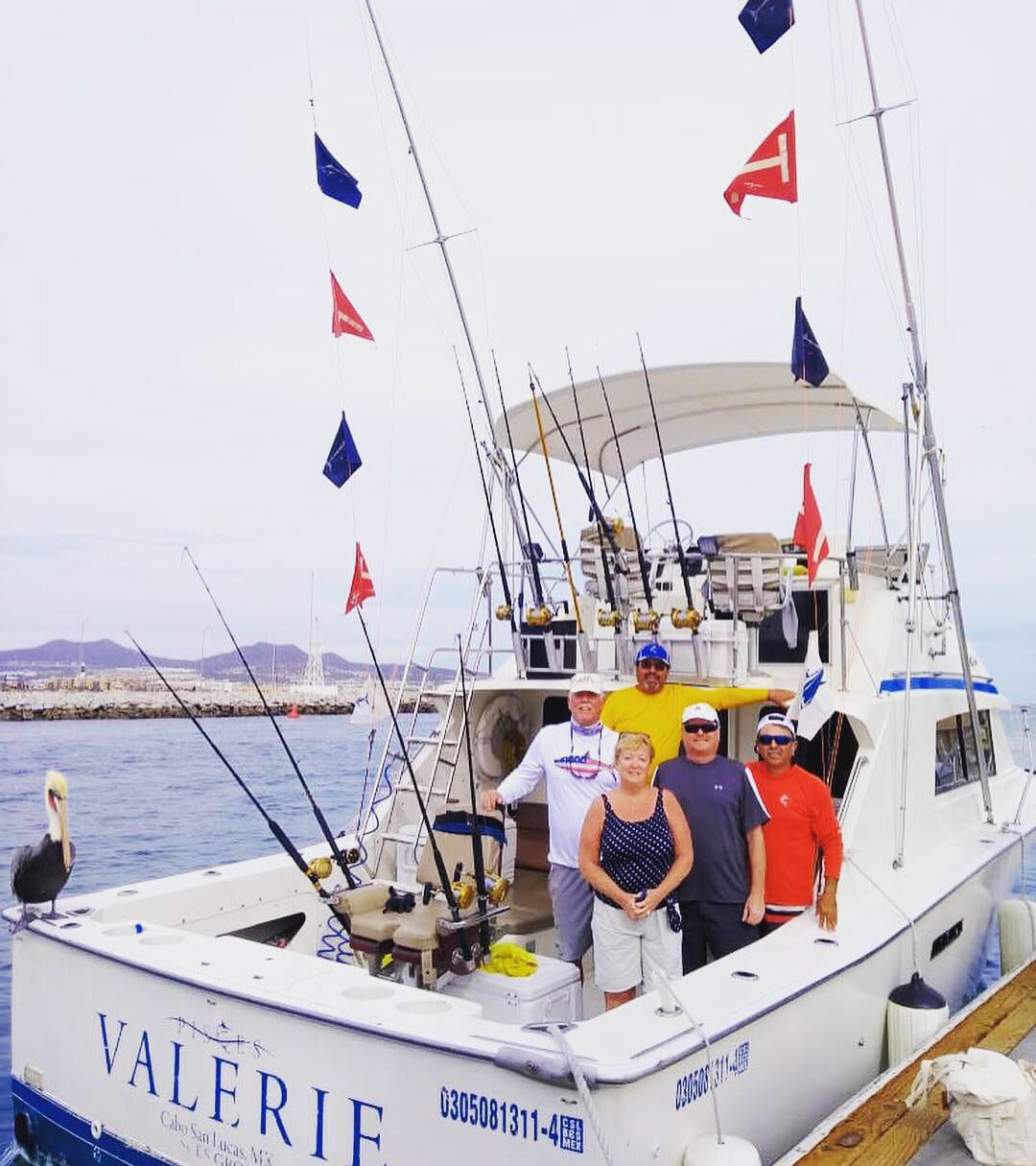 3 Striped Marlin released on Pisces 35′ Valerie by Anne, David and George from Delaware.

Pisces 31′ Tracy Ann released 3 striped marlin at Golden Gate and also landed an approx 15 lbs dorado on mackerel bait. As for tuna, Tracy Ann did well to find 28 yellowfin for anglers from Ontario, Canada. They used cedar plugs and feathers at Herradura area. The tuna ranged in size from 20 to about 40 lbs each.

Pisces 31′ Tiburon did well January 17th, with anglers Bruce Billings, Bruce Frampton and Robert Olson from Utah landing 14 yellowfin tuna, from about 15 to 35 lbs each. The crew used cedar plugs and feather lures, at the 210 spot.

Pisces 31′ La Brisa had a great week of tuna catches, with Jan 15th, being one to stand out. 22 yellowfin tuna caught, with most ranging from 15 to 20 lbs, with a few over 30 lbs, and well into the 50 lbs size. They used cedar plugs, feathers and hoochis at the 120 Spot. Pisces 60′ Reel Machine also did well with some tunas around the 50 lbs mark. They caught 9 yellowfin ranging from 15 to 50 lbs on feathers, cedar plugs and hoochis about 25 miles South of the Old Lighthouse. They also released 1 striped marlin at the Old Lighthouse. 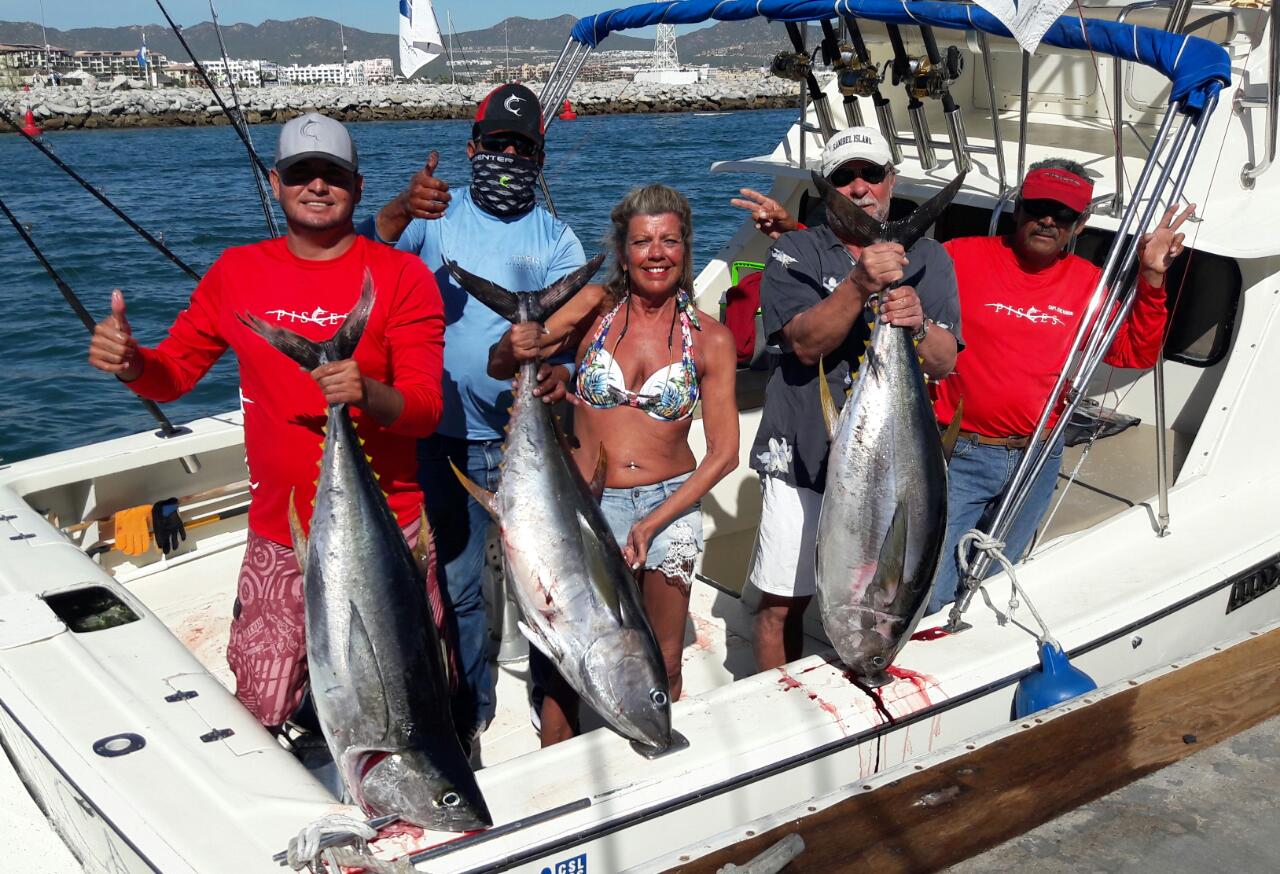 For smaller game, we saw a few Pangas head out for roosterfish, with Pisces 24′ Anamar releasing 1 small roosterfish out of Rancho Solmar Area as well as 3 bonitas on hoochi lures by the old Lighthouse. Anglers were Ben McCabe and Jon Wagner from CO. Pisces 28′ Adriana kept 2 grouper of about 15 lbs each, by chumming and also released 2 striped marlin on mackerel out of the Old Lighthouse. Anglers were Lori Bue and Scott Dwyer from Wisconsin.

WEATHER CONDITIONS: Calm seas overall, with only one day mid week with waves over 5 feet. Rain/wind on one day as well.