Once again, fantastic fishing this week. The striped marlin bite is ON, but we are seeing good numbers of smaller game fish and we still have some dorado too. And since fishing has been relatively close, anglers have had the opportunity to target a few different species in one trip, making for fun fishing and lot’s of fish caught. A clear example of this is 31ft Pisces Rebecca, which caught 5 striped marlin of about 100 lbs each, 1 dorado, 1 grouper, 3 red snapper, and 7 triggerfish, all in one day! Anglers from Rhode Island, the Khroa family, caught and released all the marlin, which they landed out at Los Arcos and Migri?o area on mackerel bait. All their small game fish was also caught at Los Arcos, closer to shore, by chumming. The dorado, of about 10 lbs, hit on a feather lure. 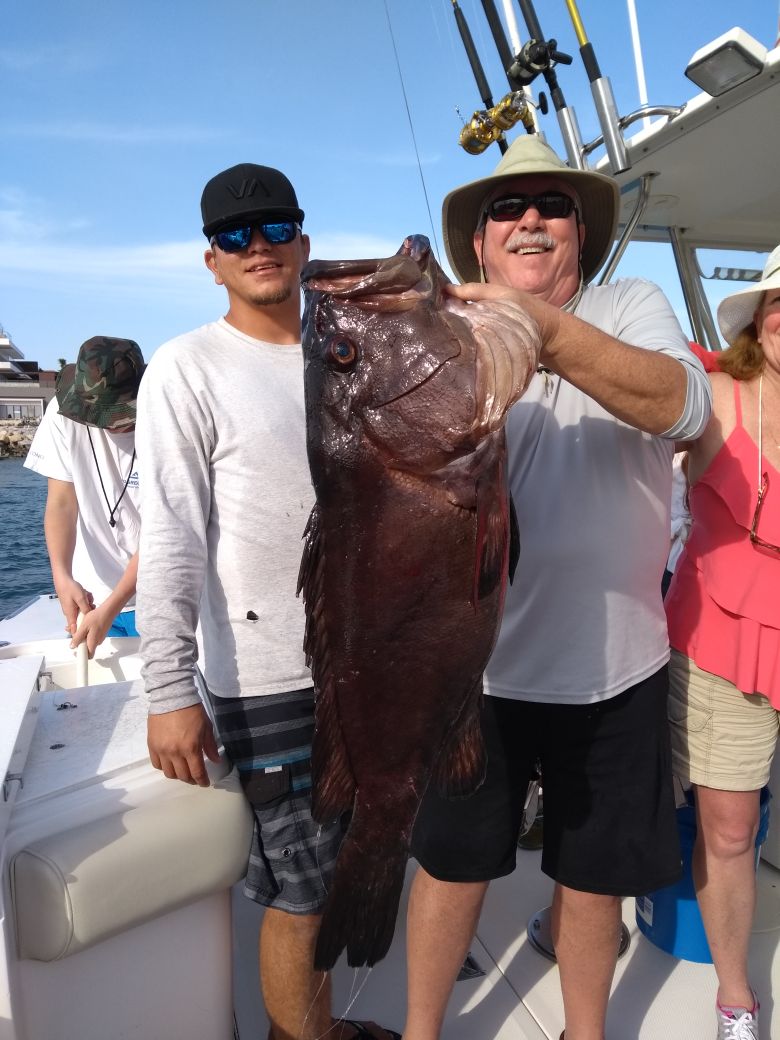 Angler aboard Pisces 38ft Speedwell with his grouper

Another nicely varied fishing day was had by Pisces 38ft Speedwell, with anglers from Minnesota, catching and releasing 1 striped marlin of about 110 lbs out at Migri?o, 2 dorado of about 10 lbs and 4 nice sized grouper, ranging in size from 18 to 30 lbs each caught at  between Los Arcos and San Cristobal. They also landed 4 triggerfish, chumming at San Cristobal.

The Pisces 32ft Billcollector was the only boat this week to catch all three of our most sought after fish here in Cabo, landing 3 striped marlin on mackerel bait which they released, weighing from 100 to 180 lbs each, at Cerros de Arena. They also landed 1 dorado of about 10 lbs on a feather lure out at the Old Lighthouse, along with 1 small football sized yellowfin tuna, which hit on a cedar plug lure. 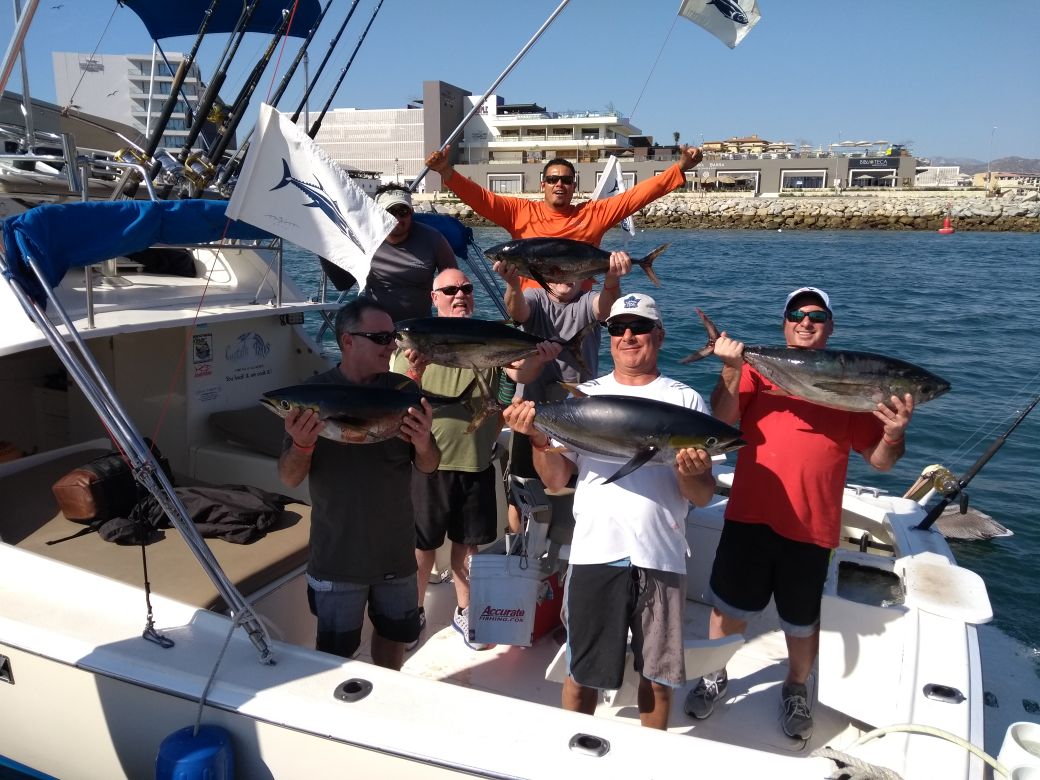 Anglers aboard the Pisces 31ft Ruthless with their 5 yellowfin tuna

Speaking of tuna, the Pisces 31ft Ruthless was the boat to catch the most tuna of any other boat this week, as anglers from Ontario, Canada, wanted to target this fish specifically. Captain Beto Lira found the fish for them by heading out to the 200 Spot, which paid off, as they caught 5 yellowfin weighing between 20 and 30 lbs each.

For some of the most marlin caught this week, we had the Pisces 42ft Hot Rod, Captained by Erick Orozco, who caught and released 6 striped marlin of about 110 and 130 lbs each, which landed on mackerel bait out from the Old Lighthouse, with anglers Brittany Johnson and Matt Price from Kentucky doing an excellent job at reeling them in. The Hot Rod caught another 3 striped marlin out at Los Arcos the following day for anglers from Oak Brook, Illinois. The marlin ranged in size from 110 to 150 lbs each, hit on mackerel bait and were released. 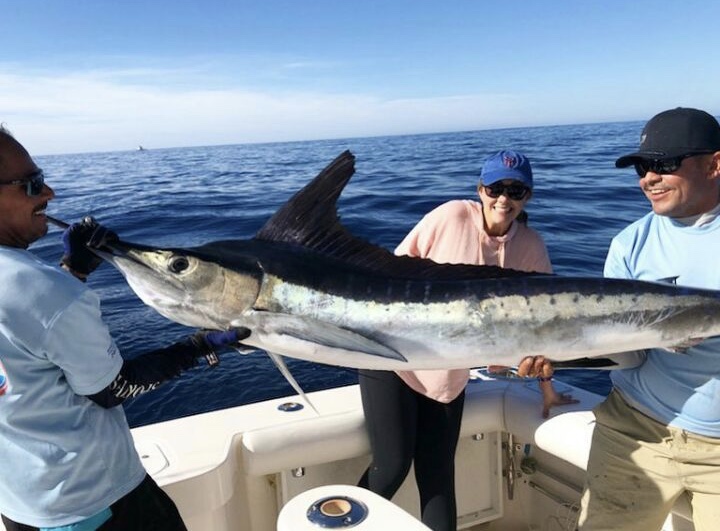 Pisces 42ft Yahoo also landed some nice marlin for anglers from Texas, who caught and released 6 striped marlin, averaging 130 lbs each, out at Golden Gate. They also caught a nice 10 lbs dorado on mackerel bait.

Pisces 28 ft Adriana with Captain Nicolas Winkler and mate Pablo, were the only boat to catch wahoo this week, and a very nice one at that. Anglers form Minnesota caught themselves the approximately 60 lbs wahoo out form the Old Lighthouse on makerel bait. They also caught 2 red snapper and 1 triggerfish in the same area, while chumming. They moved up the coast to Morros Prietos area to catch and release 3 striped marlin of about 130 lbs each.

And an equally good day of fishing for Pisces 28ft Adriana, which caught and released 2 striped marlin, 1 dorado, 2 sierra (Spanish mackerel), 11 red snapper and 20 triggerfish, all out at the Palmita area, mostly on mackerel bait and by chumming.

A total of 438 fish were caught by Pisces boats this week. Striped marlin totaled 129, with 17 dorado and 6 tuna. A staggering 286 fish were small game fish, mostly red snapper, triggerfish and sierra. All catch limits were respected and many fish released. All marlin released this week.