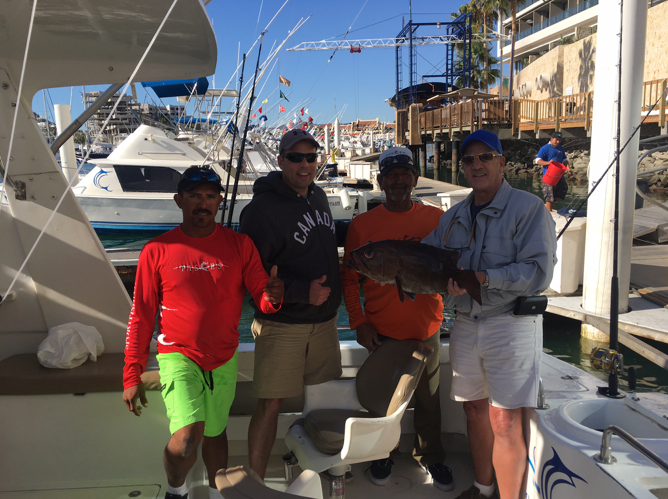 The Pearson’s from British Columbia, Canada show off their 15 pound grouper caught aboard the Pisces Adriana, with crew members Nicolas Winkler and Pablo Martinez.  Photo by Eduardo Vazquez.

There were far fewer boats trips out this week than last, and the catch success rate was at 85% of all boats. There were varied catches throughout the week, although it was mainly a small yellowfin tuna kind of week, with 43% of boats landing them. Smaller game fish associated with inshore fishing were very common this week, lending itself to a great variety of fish species being seen by our anglers this week. There was much of the extremely good eating sierra Spanish mackerel, there were also roosterfish which are prized for the fight that they pack for their size. While some boats even landed some decent sized groupers.

Starting out the week the Pisces Tracy Ann had a very prolific day of fishing, landing (and releasing some) 19 yellowfin tunas mostly in the 10-20lbs range, as well as 10 sierra Spanish mackerel for some anglers from Beaumont, Texas. They were fishing just outside the Golden Gate, and caught all fish on cedar plugs and cuchi lures. The Pisces Adriana also had quite a prolific day on the 19th, they were fishing for anglers from Los Altos, California, out at the Golden Gate. They landed a 130lbs striped marlin, three groupers and twelve ladyfish, four huachinangos (local snapper), redfish and a few other smaller species of game fish, with those all being released. While the Pisces Adriana had a double striped marlin day (released) for their anglers from California, their fish were in the 120-140lbs range and they also caught and released a small mako shark.

WEATHER CONDITIONS: Seas mostly clam this week; skies mostly clear with some clouds, air temperatures were in the mid to low 70s.