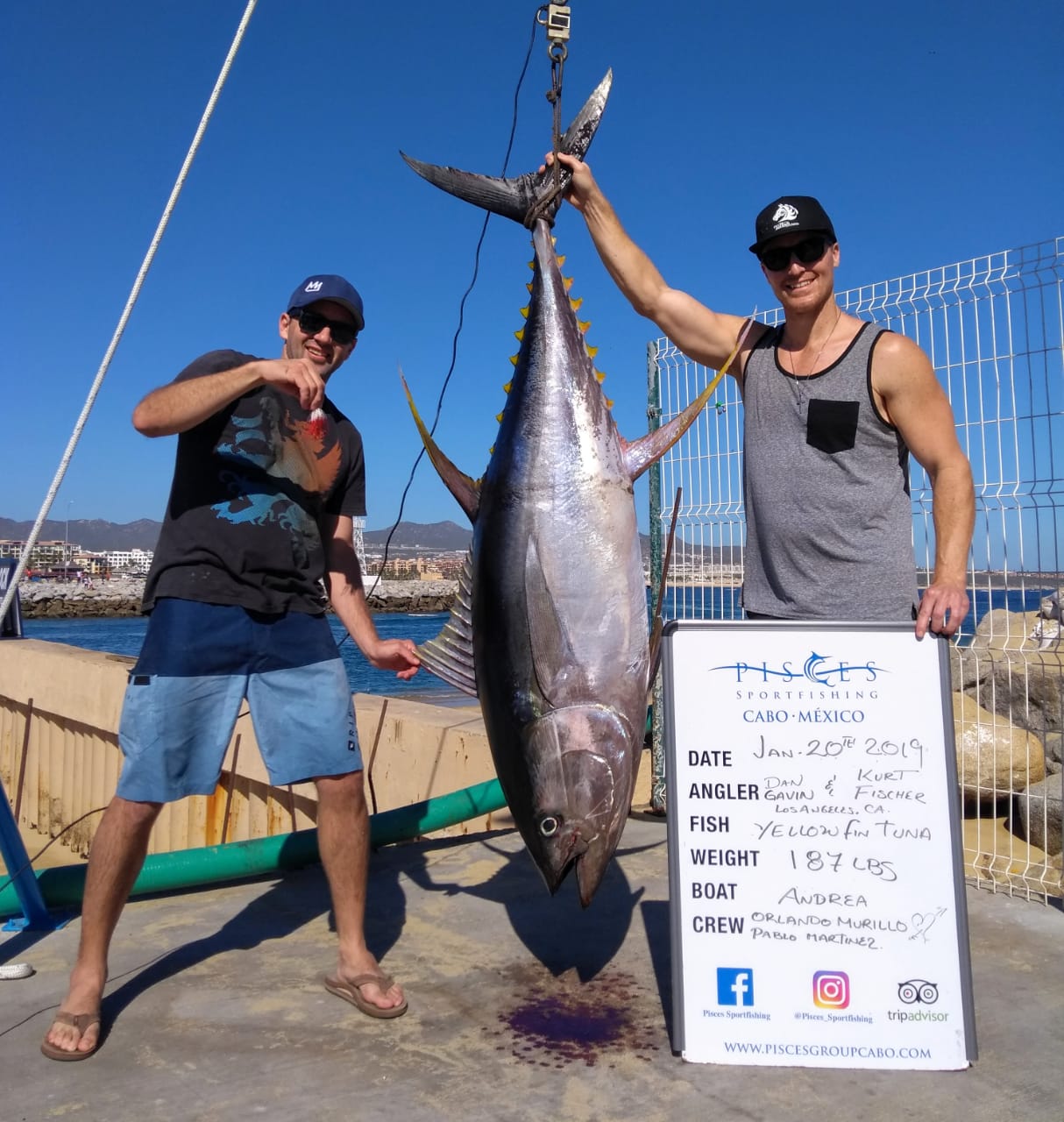 Kurt (left)  is holding the “brujita” lure that the fish hit on!

Another good week of fishing in Cabo, and looks like if you’re looking for BIG tuna you should head out on a Sunday? For over a month now, we have caught yellowfin tuna over 150 lbs on every Sunday of the month! This week was no different, with anglers Dan and Kurt from LA, California, landing a 187 pound yellowfin! Marlin action is still ON; with multiple releases at the Finger Bank and up to 4 striped marlin released per boat closer by to Cabo, between the Old Lighthouse and Golden Gate. Smaller game this week included sierra, skipjack, grouper, needlefish and amberjacks.

Again, top Finger Bank action was headed by Pisces 42′ Caliente, with 16 striped marlin weighing between 90 and 140 lbs, hitting on live mackerel bait by angler Samuel Frankenthal from Texas.  Return anglers Gene and Darlene Lavengco on the Pisces 32′ Bill Collector did well again (last time here at the beginning of the Finger season) releasing 14 striped marlin of about 90 to 180 lbs each, also on mackerel. Pisces 72′ Tag Team released 7 striped marlin with the Tremain family aboard.

New to our fleet, the Pisces 42′ Riviera “Whiskey II” caught and released 3 striped marlin this week on their debut charter. The marlin weighed up to 130 lbs and hit on mackerel and ballyhoo bait close to San Cristobal area.

At Golden Gate,  Pisces 31′ Tiburon released a total of 3 striped marlin starting off the week. Anglers from Kentucky used mackerel bait with marlin ranging form 40 up to 180 lbs. The next day, Pisces 28′ Adriana released 4 striped marlin there too and also kept three nice grouper of about 10 lbs. 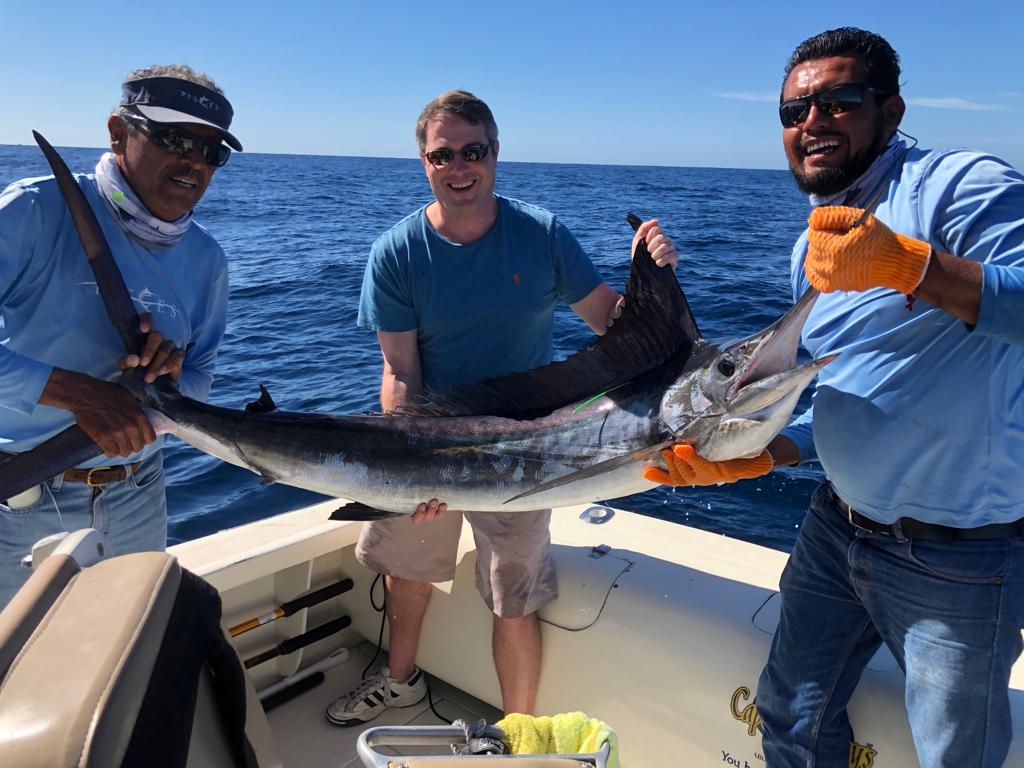 Pisces 31′ Rebecca was one of our top boats this week, releasing total of 17 striped marlin this week. January 20th they released 4 striped marlin with angler Andrew Van Raaote from Seattle, doing a great job at angling them at Golden Gate. The next day, Anglers from Saginaw, Michigan released 3 Striped marlin with the Rebecca, on mackerel, at Golden Gate. And later in the week, again they found luck with 3 striped marlin releases, but this time at Las Margaritas for anglers Jeff Adams, and Kurt Voigt, who also caught one of the two dorados caught in total this week. Their dorado was about 15 lbs and hit on mackerel at Las Margaritas. The other dorado caught in the week was also by Pisces 31′ Rebecca, weighing approx 15 lbs as well, very far up the coast, along with one striped marlin release. 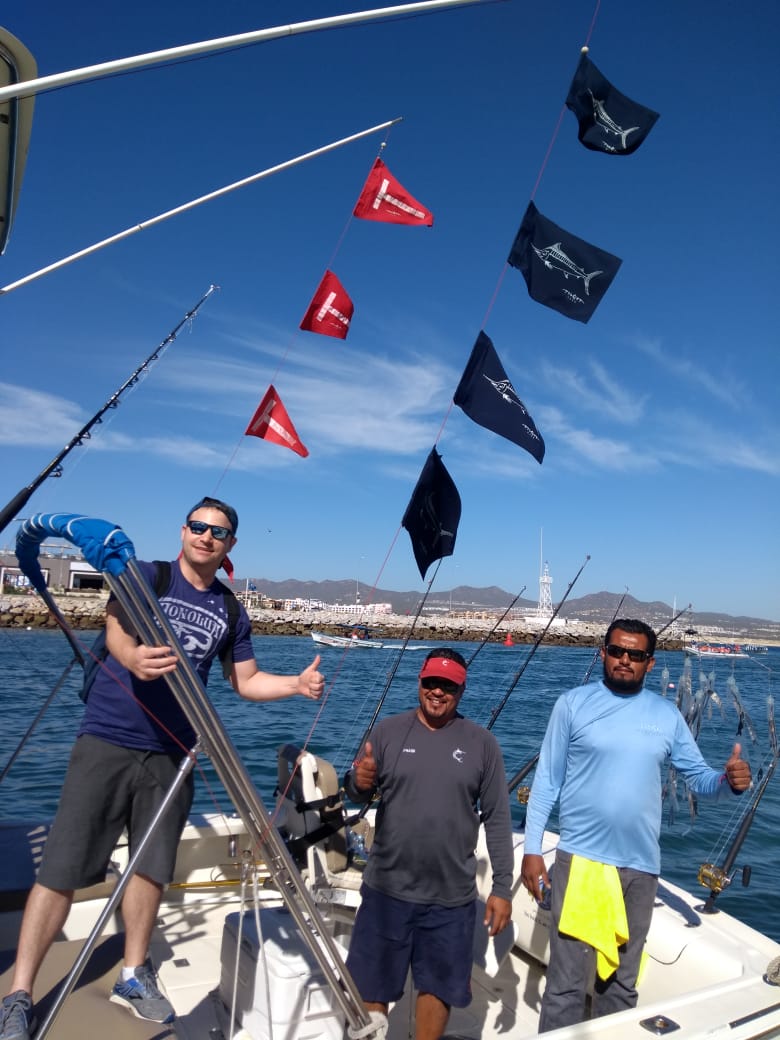 Pisces 35′ Valerie did well to release 3 striped marlin all about 100 lbs, at Los Arcos and Cerros de Arena, on mackerel. Anglers were Bill and Thomas Rothwein, who also kept 2 skipjack of about 10 lbs at the Old Lighthouse.

Now for the tuna, which has made for lots of fun this week; starting with the 187 lbs caught on Pisces 28′ Andrea. The Andrea was trolling about 35 miles out from Cabo at the 200 Spot. They had varied lures out, with what we call “brujitas” very small lure white/pink (see video at top) when the big one hit. It took anglers Dan Gavin and Kurt Fisher an hour and a half to finally get the yellowfin boatside. They also kept 3 others, which ranged from 25 to 40 lbs. 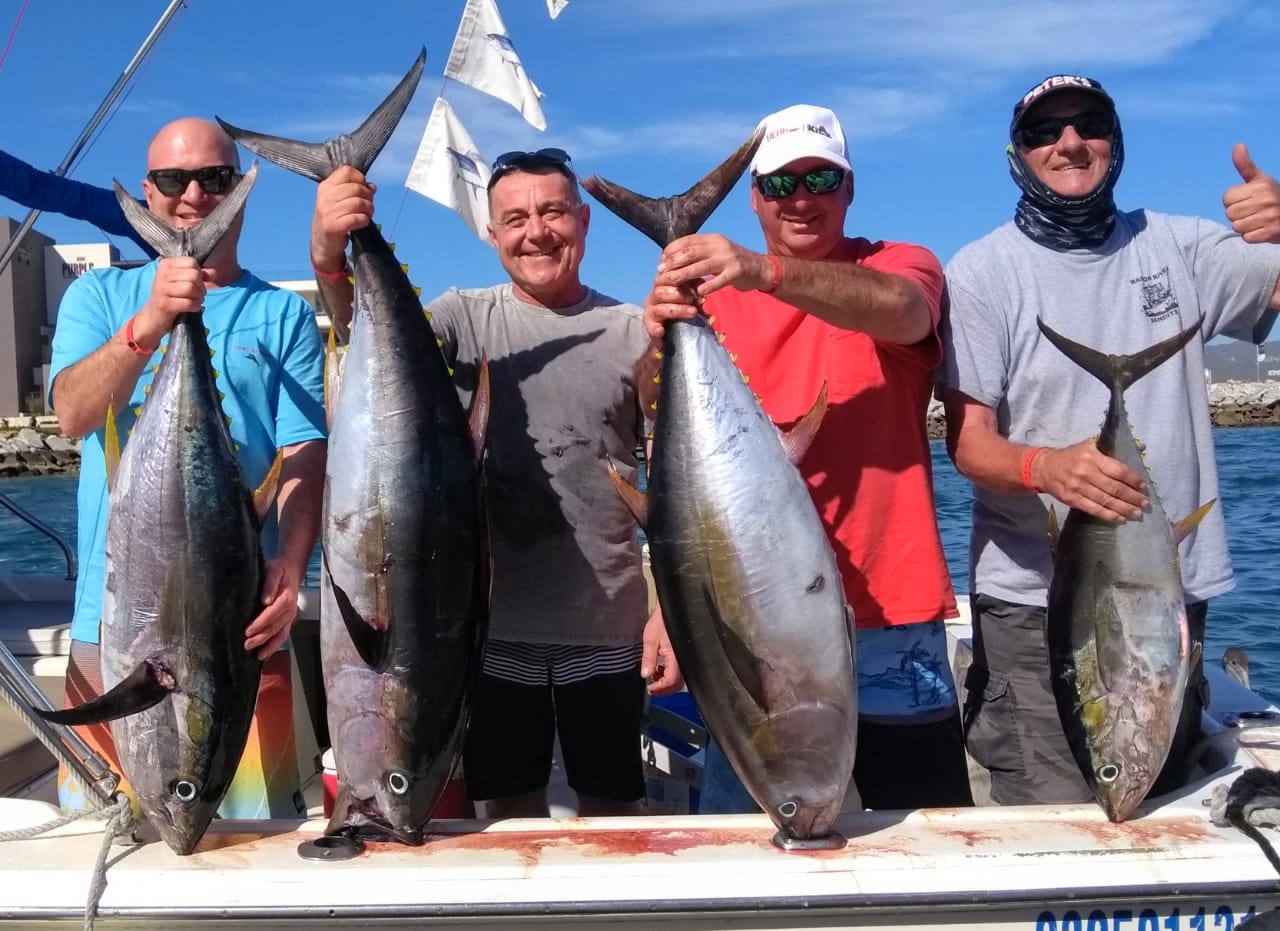 Pisces 31′ Ruthless also had good tuna action this week, with up to 14 yellowfin caught in one day.  Tuna ranged from 10 to 30 lbs, and on this day they headed about 30 miles to the 140 spot to find them; hitting on feathers, hoochis and cedar plug lures. On another day, anglers from Brantford, Ontario, caught 12 yellowfin tuna from 25 to 50 lbs each, this time heading out about 30 miles to from La Herradura, with the same lures.

January 25th, Ruthless caught 11 yellowfin, about 20 – 30 lbs each 25 miles out at La Herradura again, with the same lures working well for a successful day. Pisces 31′ Tracy Ann also headed out with some anglers from the same group, Canadians from Ontario. They caught 12 yellowfin, this eon cedar plugs and brujitas as well as cedar plugs out about 21 miles, at the 120 Spot.

Smaller game this week included sierra, skipjack, grouper, needlefish and amberjacks.  Pisces 23′ Panga Samantha did well to release 1 striped marlin close to the old Lighthouse and 4 sierra mackerel of about 10 – 12 lbs and 5 skipjack on hooch is closer to Pedregal. Angler was Andrew Van Raaote who also fished on the Rebecca.

Pisces Panga 27′ Tres Amigos also did well with one 8 lbs sierra mackerel and 1 amberjack of about 10 lbs, hitting on rapala lures at Cabeza Ballena.

WEATHER CONDITIONS: Good conditions with only one or two choppy days.

Written by Rebecca Ehrenberg, Based on the Catches of Pisces Sportfishing