It has been a truly magical week of fishing here in Cabo. Not only has the weather been delightful, an average of 80 F, with nice crisp mornings, but to top it off, whatever species of fish anglers targeted this week, they found. If you’ve dreamed of ever catching a marlin and you want to almost “guarantee” your odds, now is the time to be here. The trend continues as last week, to be upwards of 3 marlin caught per boat, with top performers catching up to 10. Those who targeted tuna and dorado also found them and small game fishing has been off the charts. Big sierras, very nice sized groupers and a few rooster fish thrown into the mix. Of course lots of triggerfish, sheepshead and others too.

I actually went out this week on Pisces 31ft Tiburon, because writing these fish reports the last few weeks has been torture with how good it’s been out there and me being stuck in the office. We caught 5 striped marlin yesterday, all on mackerel bait, out at Golden Gate; and if it wasn’t because we started our day late and came back early, I think we would have caught a few more. Three of our marlin hit on live bait, as the crew expertly cast the mackerel almost into the marlin’s mouth – they almost had no choice but to take it – while the other two hit on weighted dead bait, while trolling the area. As we arrived at Golden Gate, we encountered Pisces 31ft Tracy Ann, hooked up to their second marlin of the day already, at 9 am. They caught and released 5 striped marlin total. Across from us, Pisces 31ft Ruthless was also hooked up, anglers Cynthia Carvill, Larry Freeman and Max Pierce, from San Pedro, CA, caught 8 striped marlin, which they released. 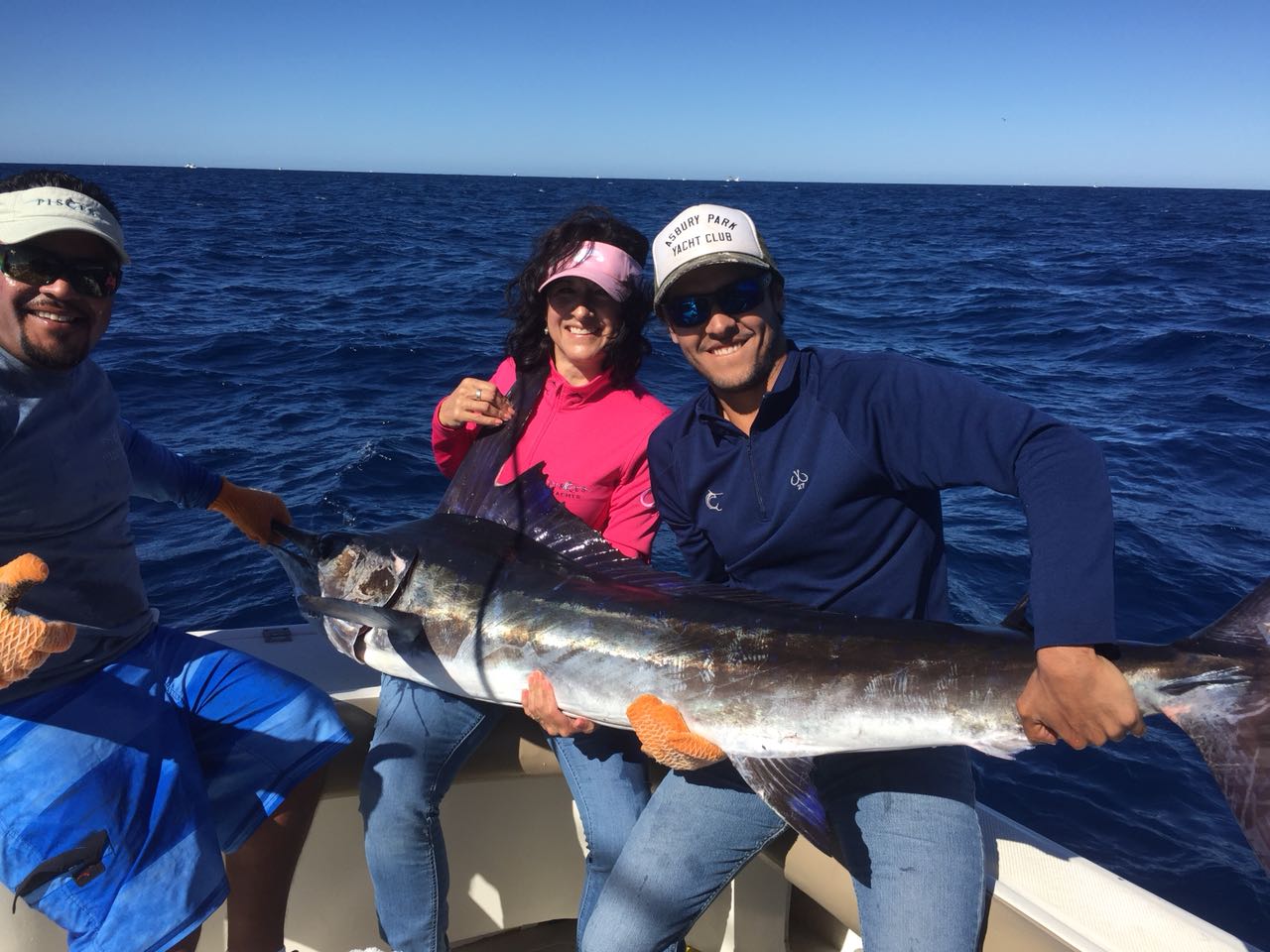 We saw marlin free jumping, frigate birds and seagulls trying to steal our bait and causing commotion, but also guiding us to the spots with most action. There wasn’t even much competition between boats, we all knew there was enough marlin to be caught here by everyone. An hour later I noticed Pisces 42ft Hot Rod, also hooked up, their marlin fighting impressively, leaping through the air. Captain Erick Orozco and anglers from Callifornia landed 7 striped marlin total, all on mackerel, as well. Of course, they released them all. Pisces 28ft Adriana was also present, catching 2 marlin that day. And then, there was the Pisces 31ft Rebecca, anglers Andy Patch, Geoff D’sena and Peter Babros from California had their work cut out for them as Captain Jose Ramon and Mate Luis Cota put them on 10 marlin that day, with all of them making it to the boat and released successfully. The Pisces Rebecca was without a doubt, our top marlin boat this week, they fished every day and had 100% catch success rate. They caught a total of 28 marlin in 7 days! They were also able to deliver for anglers aboard not looking for marlin. January 25th they literally went the distance for their client and headed 35 miles out to the 210 Spot, as angler Chris Lehman was hoping for tuna. They landed 8 yellowfin on tigrillo and green lures, as well as on cedar plugs; they ranged in weight from 25 to 40 lbs each. They also caught 1 dorado of about 20 lbs on a flying fish lure. 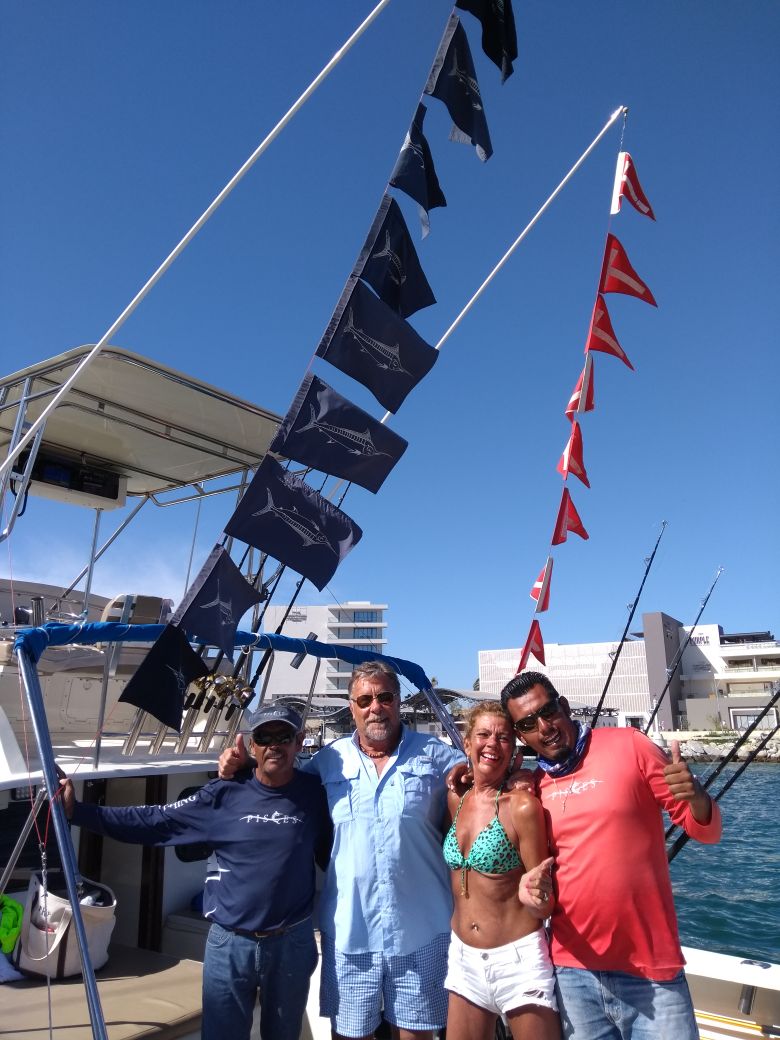 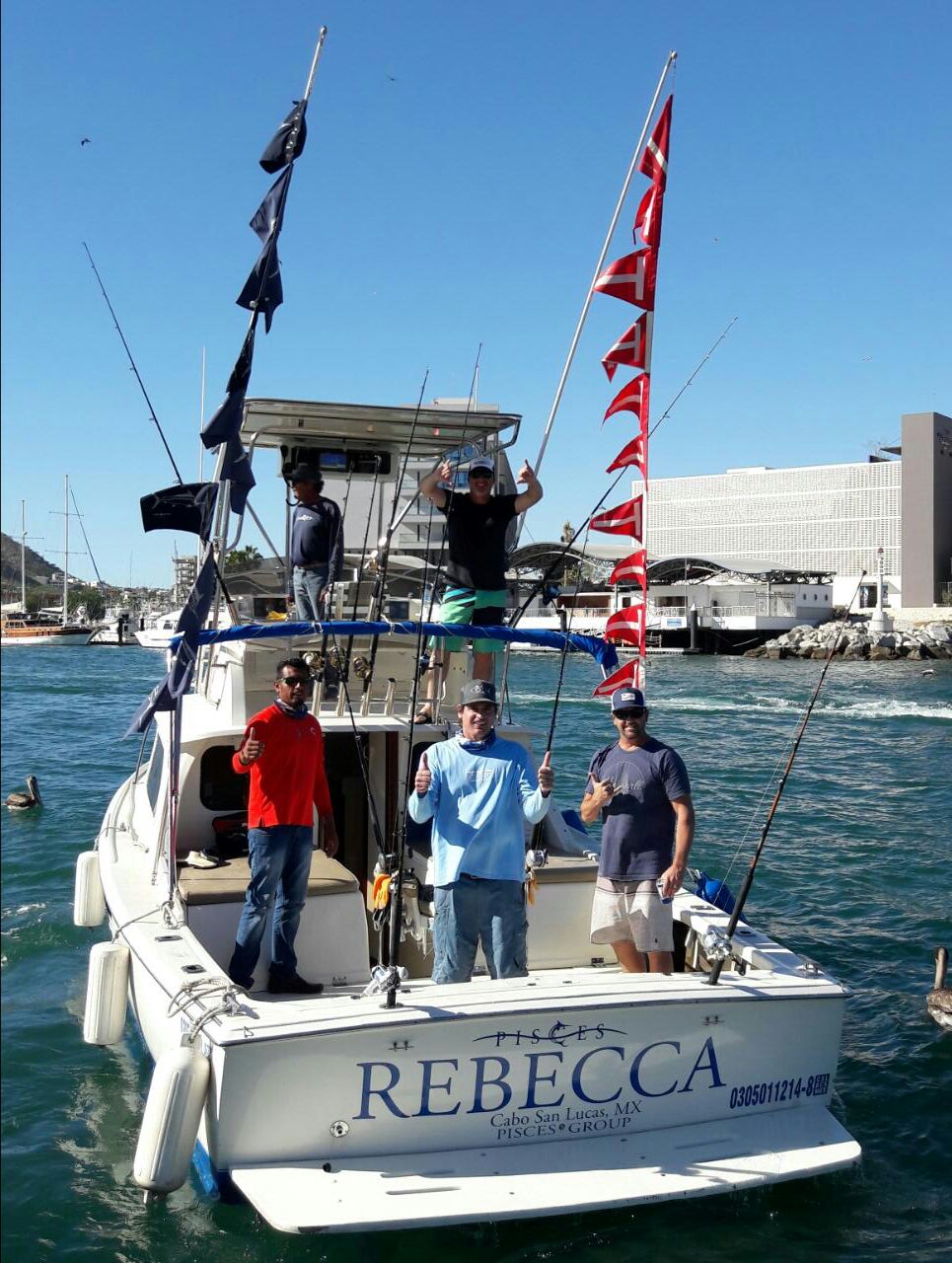 Now that’s the way to hit the docks! On the left, 9 striped marlin released

and on right 10 striped marlin released, both aboard the Pisces Rebecca.

That same day, the Pisces 35ft Valerie also went out in search of tuna and found them about 25 miles out at the 180 Spot. Captain Roberto Sandez and anglers Doug and Mike McCoy and friends from Iowa, caught 14 yellowfin of about 15 to 20 lbs each. Their fish hit on cedar plugs and feathers.

The Pisces Valerie also delivered for solo angler Andrew Heine from Denver, Colorado, who has been fishing with us for a few years now. He fished two days on the Valerie, and mentioned that he sticks with the Valerie because Captain Roberto Sandez and Mate Salvador Flores have always taken care of him, and these two days prove it. On January 22nd, he landed 4 striped marlin, which he released, all at Golden Gate, and 3 sierra of about 5 to 8 lbs by chumming at Migri?o. The next day, he outdid himself, as he caught and released 5 striped marlin, again out at Golden Gate on mackerel, and 5 Sierra, with the biggest being an impressive 12 lbs! He then went on to catch 5 grouper and 13 red snapper of about 10 lbs! The small game fish were caught at La Palmita area on mackerel and by chumming. Oh yeah, almost forgot to mention, he caught 9 triggerfish too. Then, as if this wasn’t enough fishing for him (but can you ever get enough?), Andrew decided he’d like to try his luck with roosterfish, and went out on one of our Panga boats, for a half day. He caught 3 rooster fish, of about 20 lbs, which he released, caught in front of El Pedregalito. 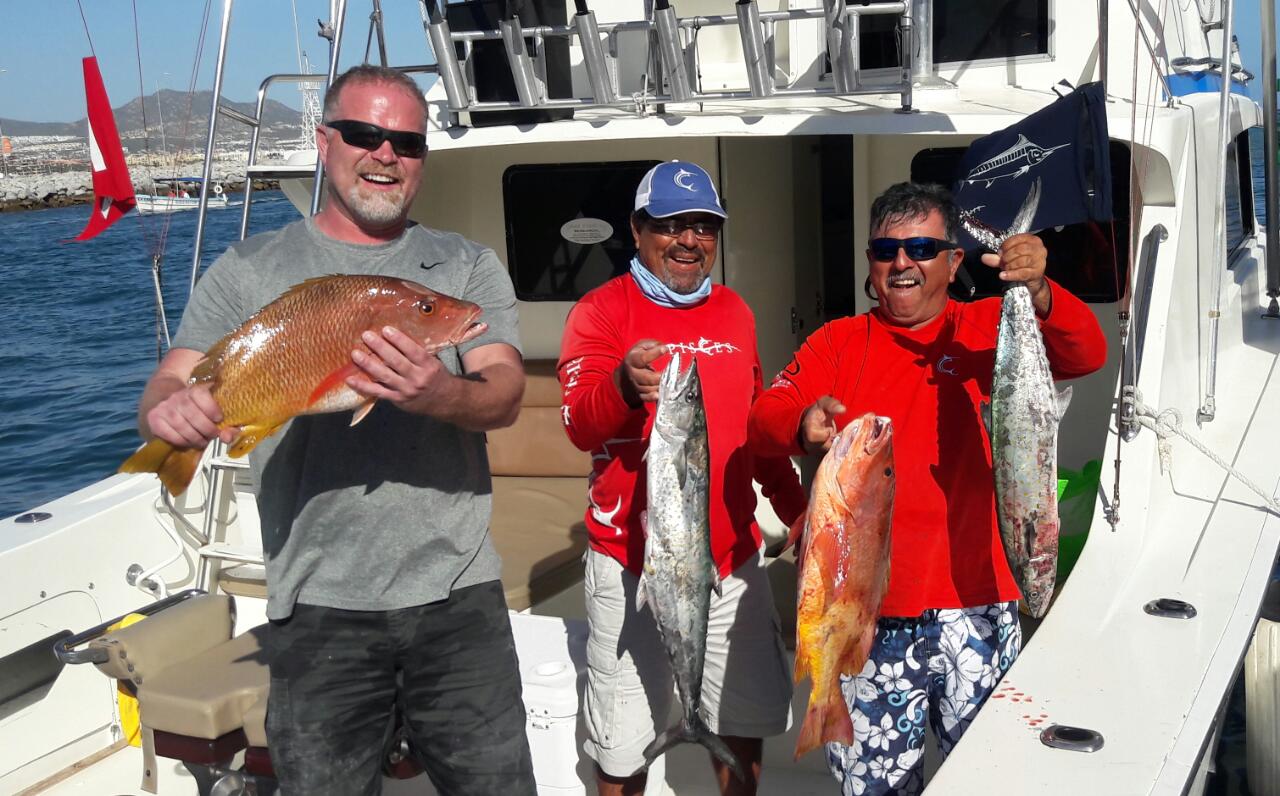 Yesterday was one of the funnest day’s I’ve had on the water in a long time, taking me back 10 or 15 years, when the excitement of fishing as a kid takes over you and everything is a thrill. Well, we were all kids yesterday, even the crew. Captain Rosendo Gomez of the Tiburon has been with Pisces for 25 years, and is out on the water almost daily. He mentioned how he hasn’t seen the marlin bite like this in quite some years now. 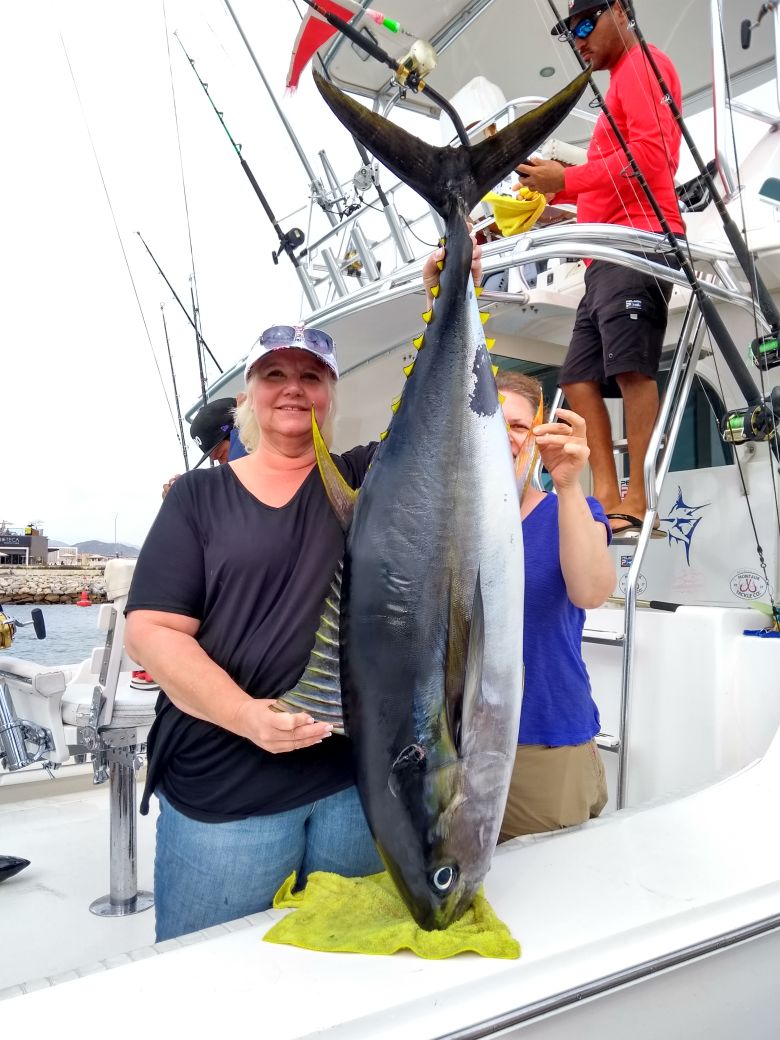 Pisces boats caught a total of 385 fish this week, of which 153 were striped marlin, 15 were dorado, 49 were tuna and 168 were small game fish, including sierra, grouper, red snapper, triggerfish and rooster fish. All catch limits were respected and all but one marlin was released.