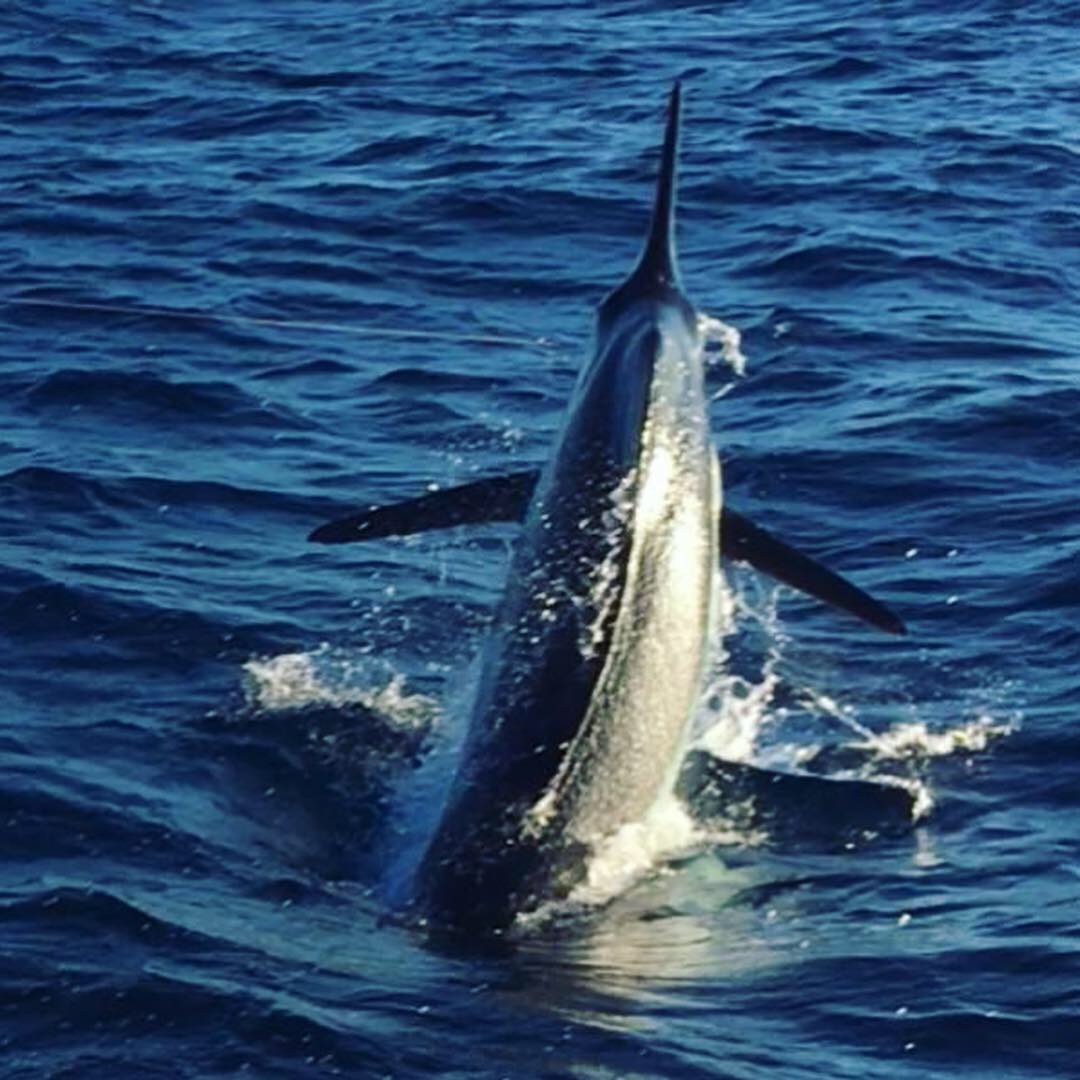 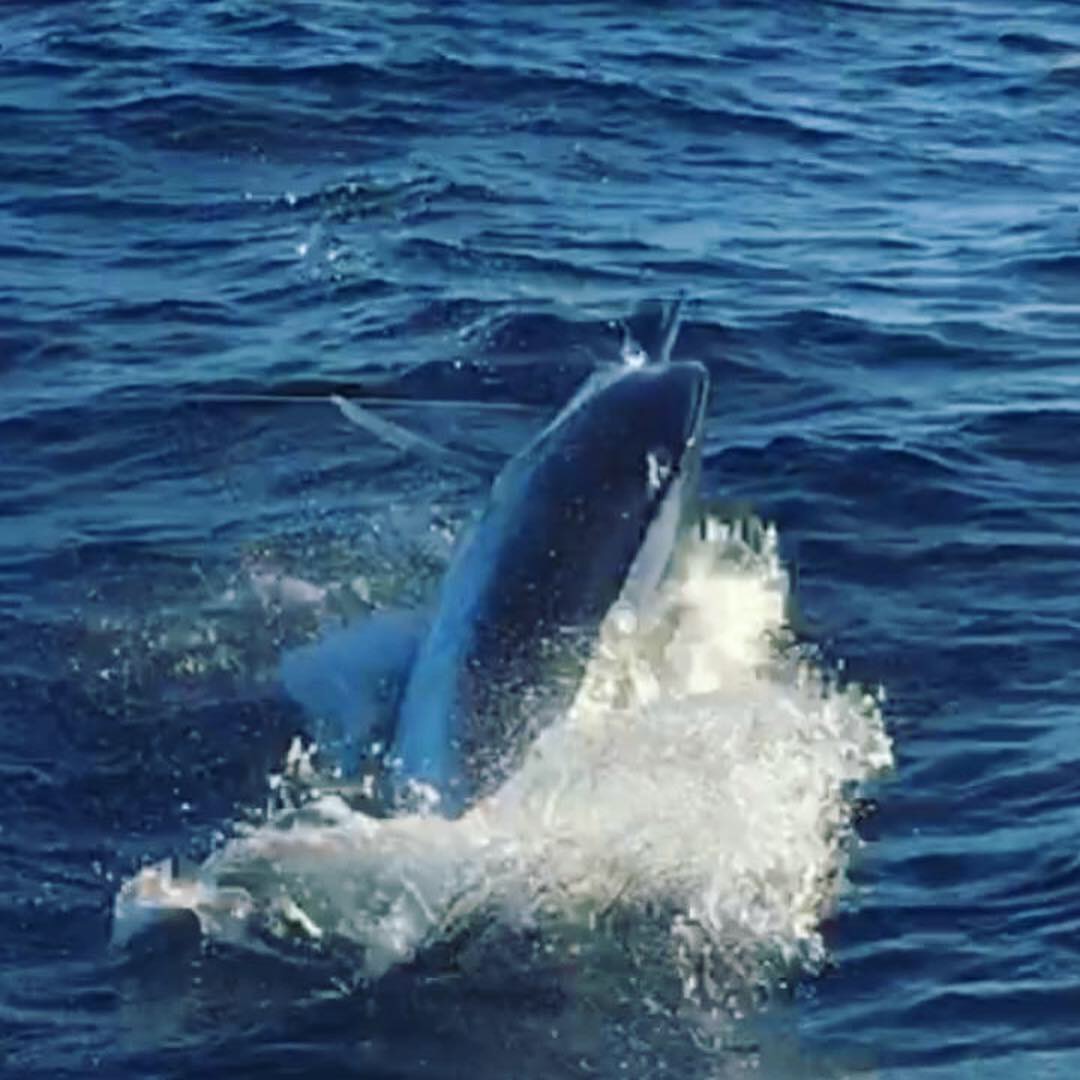 WHAT A WEEK! 100% Catch success rate for all species combined, making it for an incredible time for fishing in Cabo. Two outstanding catches stand out, an amazing Swordfish catch by Pisces 32′ Bill Collector owner, Mark Chiavetta to start off the week and a jaw-dropping estimated 800 lbs  Black Marlin fought on the Pisces 38′ C Rod. We saw consisten fishing all aroudn, with more marlin closer to port too and some nice inshore fishing for roosterfish, jack crevalle, sierra mackerel, grouper, among others. Dorado numbers are about the same as last week, with only a few sprinkled in, and tuna numbers are holding strong, even though the boats are heading out far too find them, about 30 miles or so. 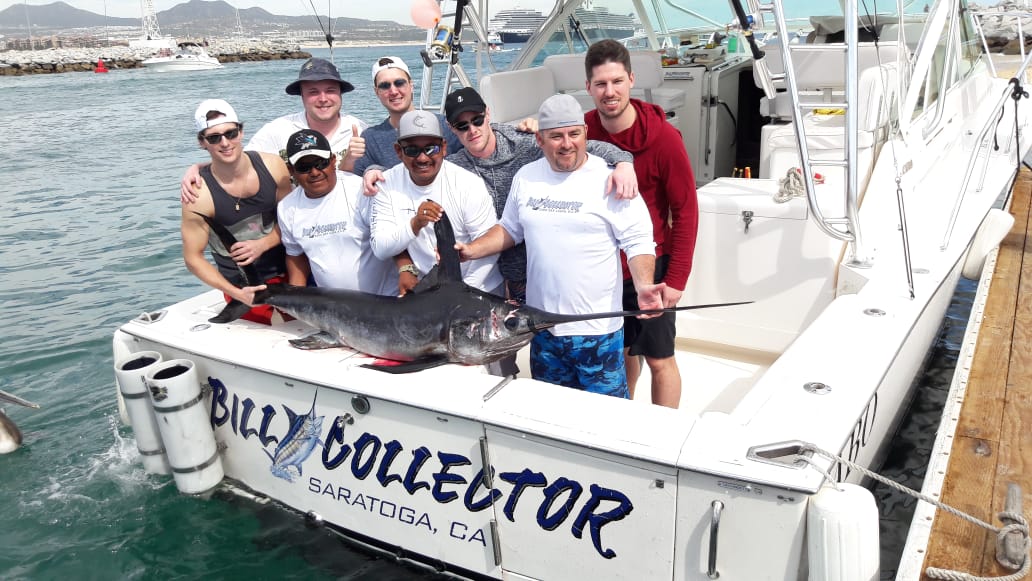 Pisces 32′ Bill Collector was about 30 miles out when they saw the swordfish sleeping on the surface. They quickly pulled all lines in and snuck up on the fish, pitching a bait at it from the bow. The swordfish took the bait immediately and it was on. Owner aboard, angler Mark Chiavetta said it “fought hard, like a tuna”, but they landed it relatively quick. The fish hit the scales weighing in at 98 lbs.

The next big thing this week, the Black Marlin for angler Lance Roffers, a man who works in the construction business in Wisconsin, and who had never caught a marlin.  At first, the C Rod crew and anglers thought this was a Striped Marlin. The crew had found a nice school of porpoise about 15 miles South of Cabo and was looking to land some tuna. They saw a marlin come up to the surface in the midst of all the porpoise and cast out a live mackerel bait on a 30 lbs test line with 100 lbs leader on Shimano reel. The fish took the bait and then a few moments after jumped. They were all astonished to see the size of it and quickly realized of course, this was no striped marlin. Lance’s first ever marlin fight would be one for the books. Ultimately though, the fish won the fight, after about an hour and a half when only a few feet from the boat, it broke loose. But hey, they did find their tuna, they kept one 30 pounder in the end. 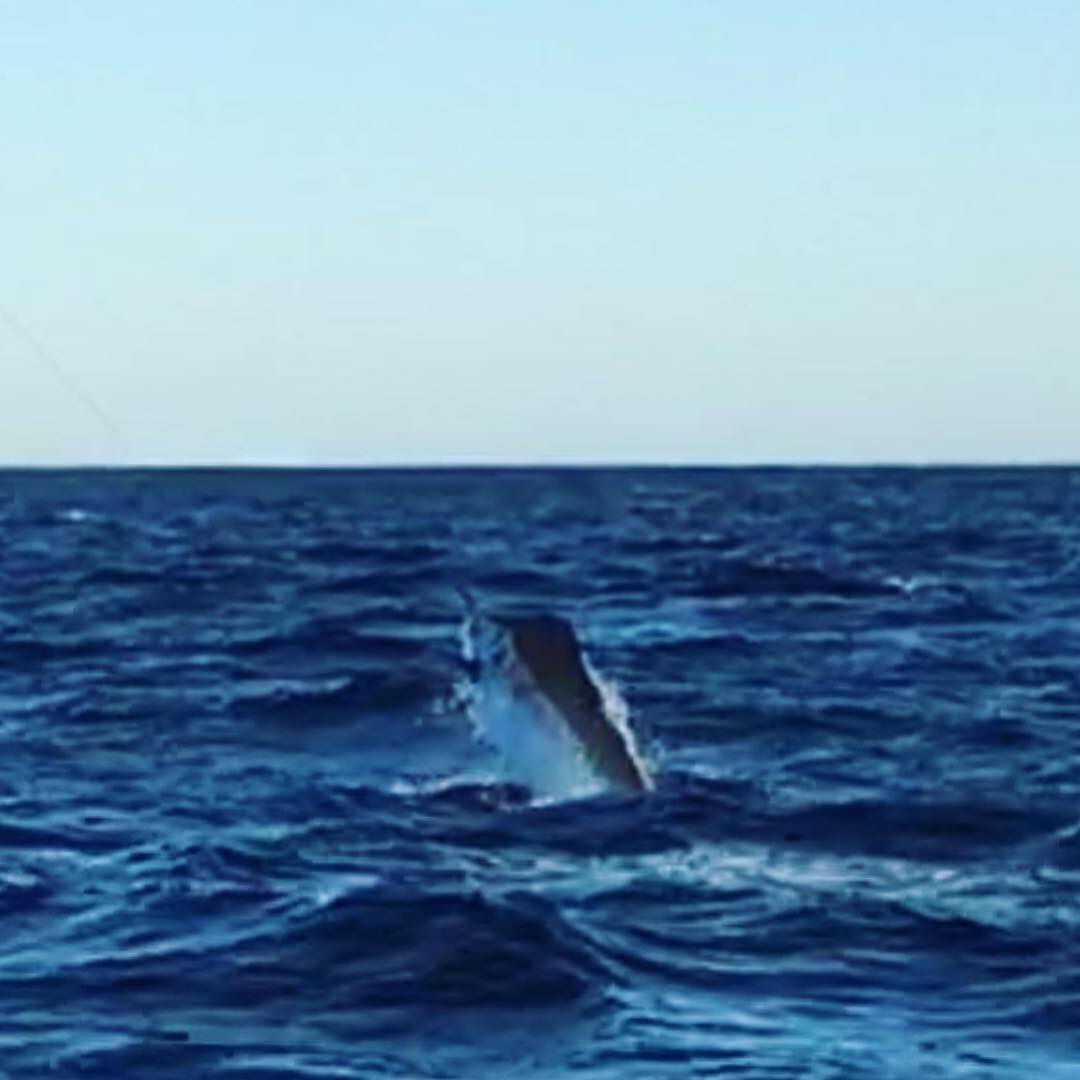 And as if this wasn’t enough for Pisces 38′ C Rod in the week, the crew showed of their skills with 12 striped marlin released at Golden Gate on a different day too. Anglers were John and Kathy Carey from Missouri, who caught their fish on mackerel bait, ranging in size from 100 to 130 lbs each. 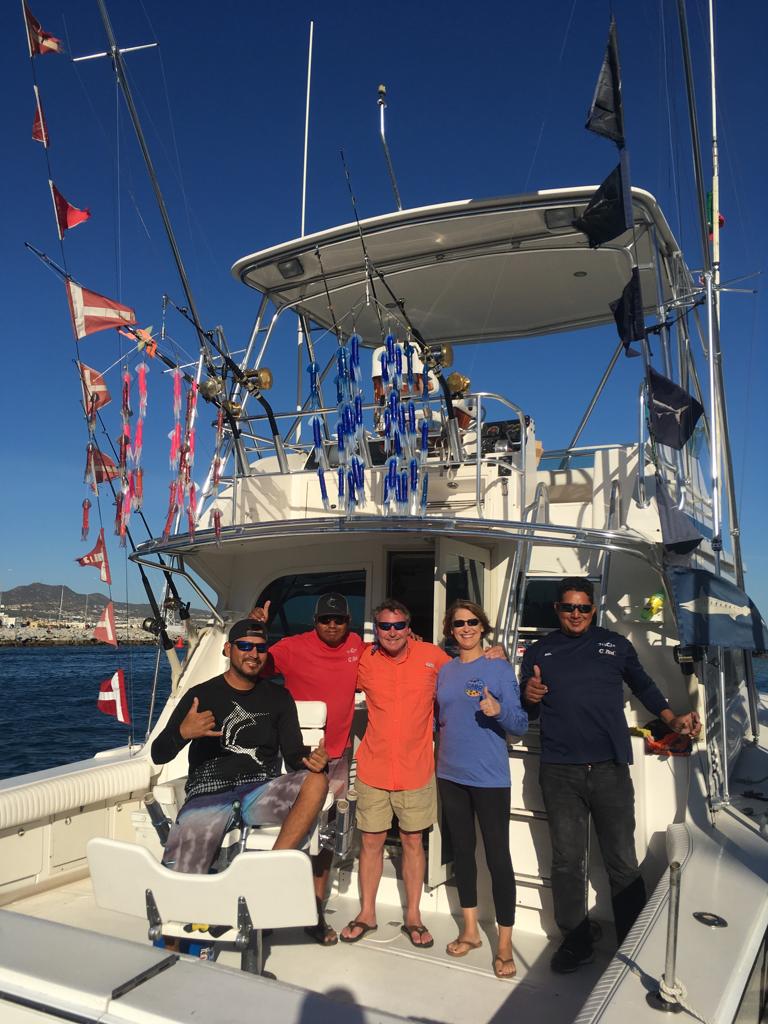 Pisces 42′ Caliente also released 12 stripeys, all of these very close to the Old Lighthouse, using weighted ballyhoo bait on the troll and some live mackerel. Pisces 32′ Bill Collector also headed to Golden Gate, with their anglers, from CA, doing well to release 7 striped marlin, with the largest of approximately 180 lbs.  Pisces 32′ Bill Collector did well again in the week with 4 striped marlin released at the “Chawita” area, not too far up the Pacific side. They caught all fish on mackerel, marlin ranged from about 100 – 140 lbs each. A great week for this crew as well! 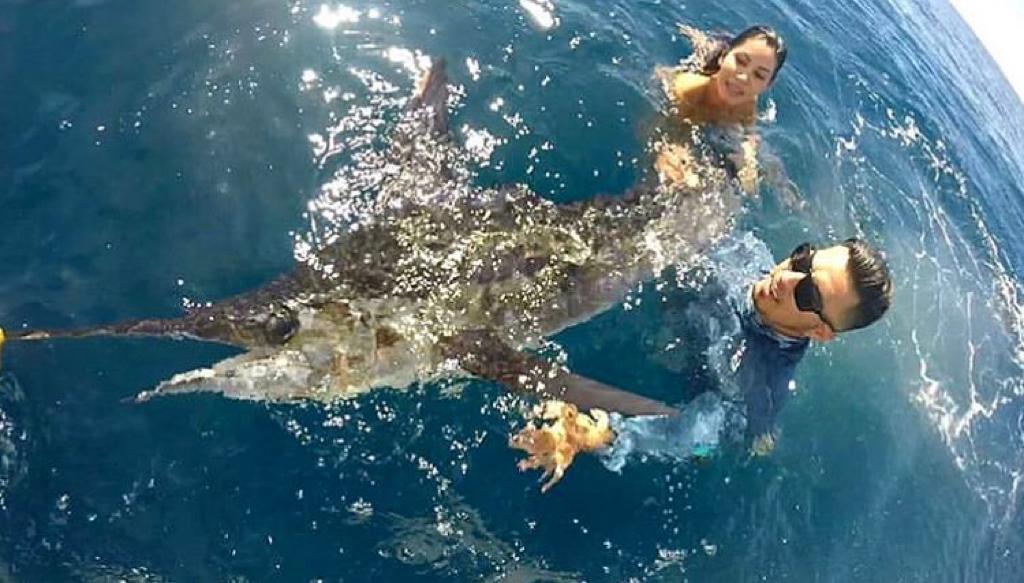 Pisces 31′ Tracy Ann also headed to Golden Gate several times this week, with one of their top producing days releasing 5 striped marlin ranging from 120 to 160 lbs each, hitting on mackerel bait. Anglers were The Jacobsen’s and Schroeders from CO.

Pisces 42′ Hot Rod, also did nicely, landing one of the few dorados this week, along with their marlin. They headed to Chawita area and released 3 striped marlin and then had a 20 lbs dorado hit on mackerel there too.  These same anglers, from Maryland, fished again with the crew, and  headed this time to the Old Lighthouse, releasing another 2 striped marlin, this time using sardines. 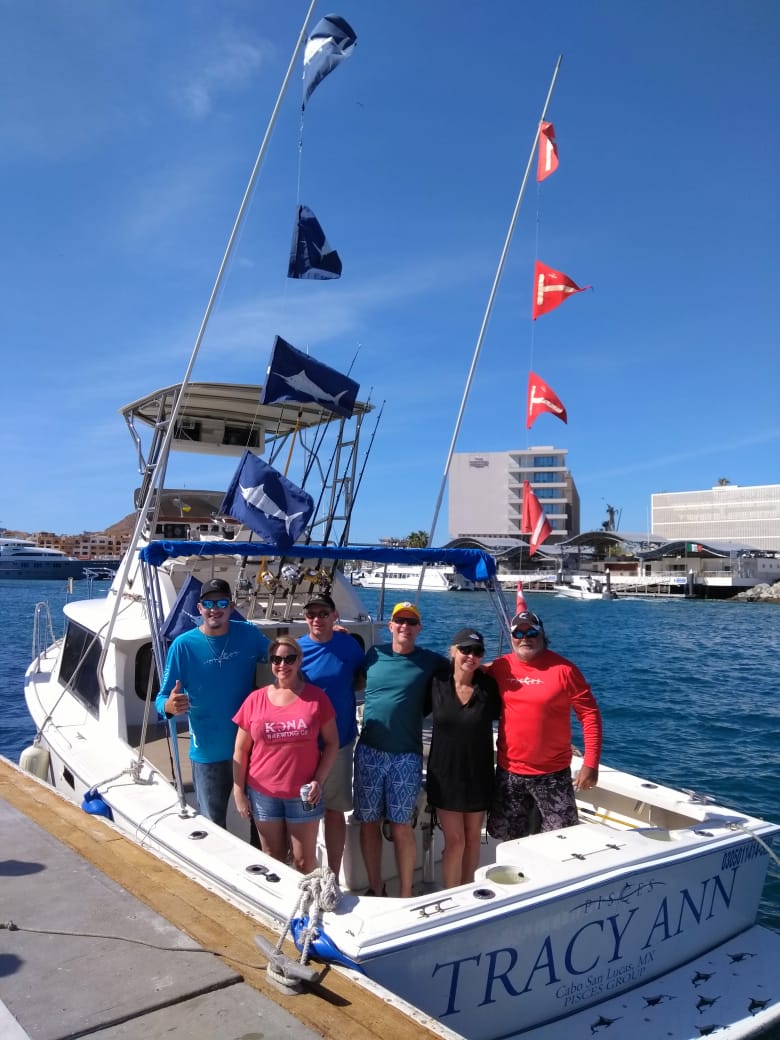 Tuna catches included Pisces 31′ Ruthless‘ 10 yellowfin tuna caught almost 40 miles out, around the 160 Spot. The tuna were about 20 lbs each and hit on cedar plugs and feathers. The next day, Ruthless did well again, landing 6 tuna of about 25 to 30 lbs each somewhat closer to Cabo, South of the old Lighthouse. They found an almost 20 lbs dorado there too, which hit on mackerel bait. Anglers were the Johnson family from Santa Rosa, CA.

Pisces 35′ Valerie did well this week to have one of our most varied catches, keeping 6 yellowfin tuna ranging from 15 to 35 lbs each at the 180 spot and then releasing a nice spearfish of about 40 lbs. This one hit on mackerel bait, for anglers Mike McCoy and Scott Dittmer from Iowa. 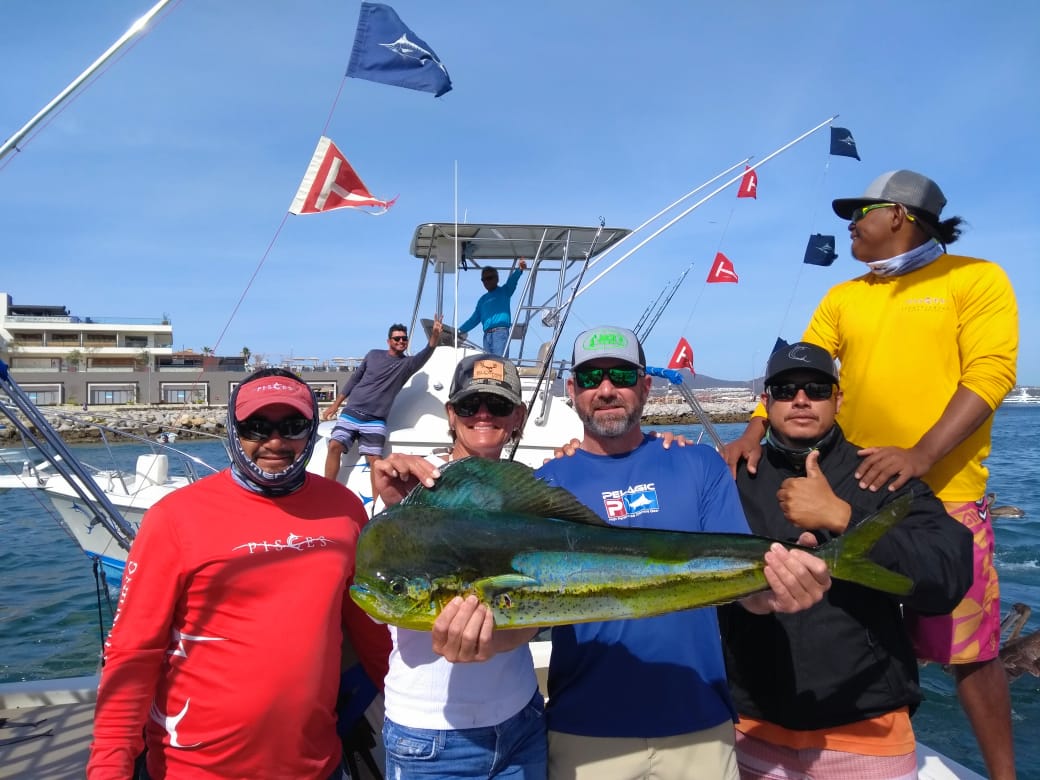 Pisces 31′ Ruthless anglers and crew showing off a nice dorado!

February 1st, the Valerie headed inshore and did well to keep 8 red snapper by chumming a the height of the Golden Gate bank. They also caught 3 triggerfish, 6 babosas, 5 sheepshead.

Pisces 24′ Panga Anamar did well to catch a nice jack crevelle of about 15 lbs on mackerel bait at the Pedregal and also 2 bonitas at Los Arcos for anglers from New Hampshire.

Pisces 25′ Panga Poseidon released a nice roosterfish of about 25 lbs close to Cerro Colorado on mackerel and kept 7 triggerfish by chumming close to El Tule. Angler was Richard Cook from Oklahoma. 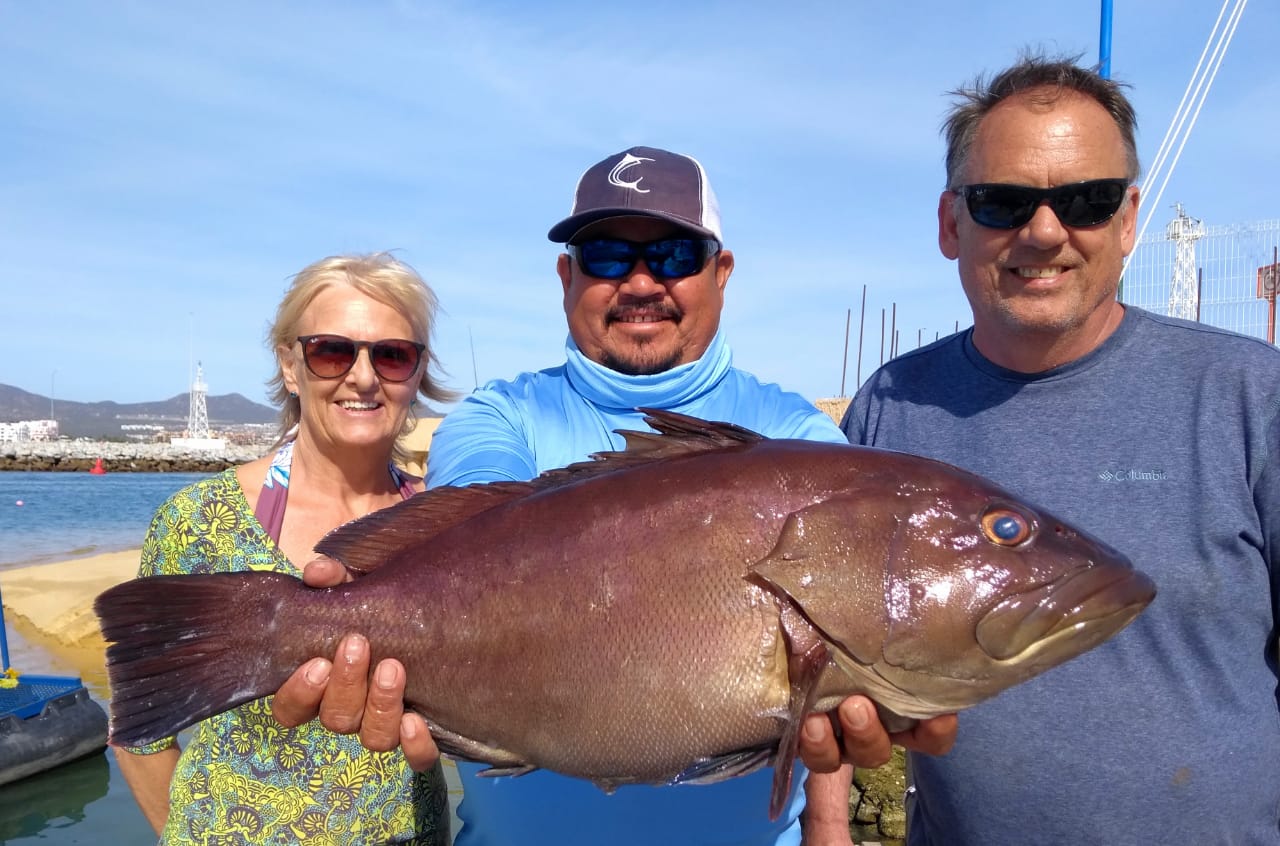 AVERAGE WATER TEMP: Early in the week temperatures were a few degrees cooler, ranging from 69- 71 F, then a slight rise to about 73-75

Written by Rebecca Ehrenberg Based on the catches of Pisces Sportfishing