Continuing from last week, we’ve seen the striped marlin catches abounding with slightly more dorado and many small game fish of good size caught as well. Crews have done a great job of landing tuna for those anglers hoping to catch them, by going out long distances to find them.

January 27th started off the week nicely with many boats catching upwards of 5 marlin each. The 42ft Pisces Hot Rod for example, caught 6 striped marlin for anglers from California, 5 of which they released. The marlin were about 150 to 180 lbs each and hit on mackerel bait at Golden Gate.

The Pisces 31ft Rebecca also caught 6 striped marlin this day, releasing all, with anglers Andy Patch, Geoff D’Sena and Peter Babros, who fished earlier in the week doing a great job at fighting the fish. The fish weighed an approximate 140 lbs. Again, caught at Golden Gate on mackerel. 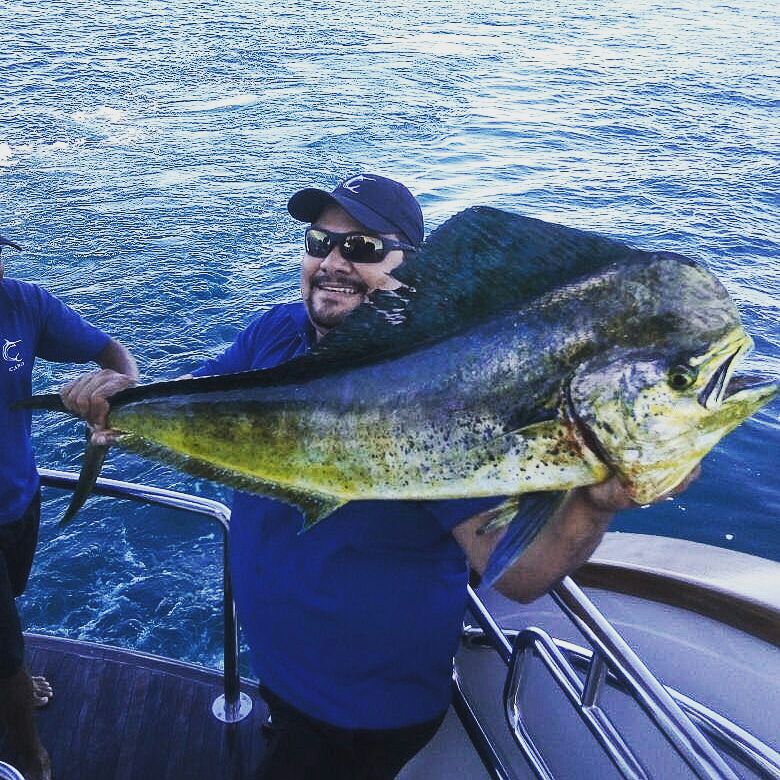 Four striped marlin released for Pisces 32ft Billcollector on this day as well, for anglers Chantal Charron and Otto Sabo from Canada. The Billcollector also had a great tuna day on the 31st, with 18 yellowfin caught about 36 miles out from San Jaime, on cedar plugs, features and hoochi lures. The tuna weighed approximately 20 to 25 lbs. They also caught 4 dorado of 15 and 25 lbs, on feathers and mackerel bait about 29 miles out from San Jaime.

Pisces luxury fishing yacht Contessa, of 85 feet, had a great cruising and fishing day with guests catching 3 big dorados, one of which was about 35 lbs, on their afternoon cruise. They caught the dorado on lures just past the Old Lighthouse.

And how about the 20 yellowfin caught by anglers Brady Kok and Bryce Slind form Kansas aboard the very nice, and new to our fleet, Pisces 33ft Thresher.  They landed the football sized tunas about 27 miles out from the 210 spot on cedar plugs and feathers. They also landed a small striped marlin of about 90 lbs out from the Old Lighthouse. 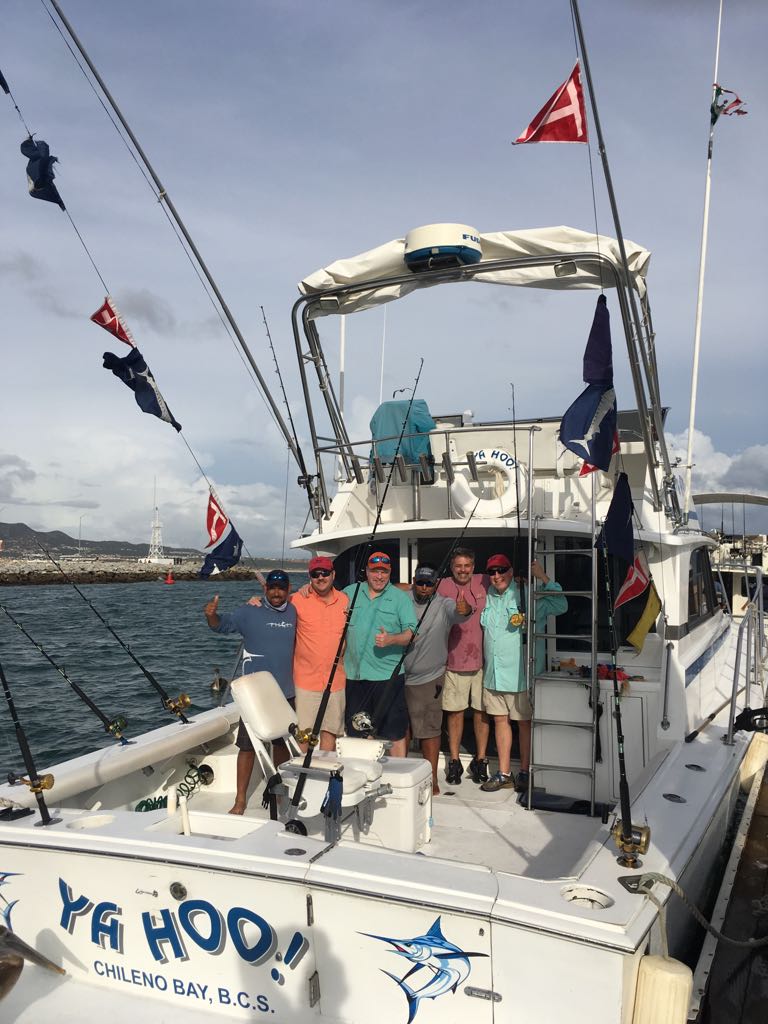 More dorado and a great day of marlin for Pisces 35ft Valerie, with long time angler Mike McCoy from Iowa catching and releasing 6 striped marlin of about 120 to 150 lbs. McCoy and Captain Roberto Sandez, had gone out far looking for tuna and without much luck, arrived at Golden Gate about 12:30 pm. From 12:30 to 2:30 pm, they landed all their fish! Pretty impressive! Not only did they catch and release the marlin, but they also caught 4 dorados here as well. The dorados weighed about 15 and 20 lbs each and hit on lures: pink, blue and red/black.

The Pisces 42ft Yahoo did arrive to Golden Gate early this day however, and they made the most of it. They caught and released 10 striped marlin and 1 dorado! Anglers Guy Ward, James Rith, Michael Louden and Steven Targarona from Maryland caught all fish on mackerel bait. The marlin ranged from 100 to 150 lbs and the dorado was about 15 lbs. The next day the Yahoo and the same anglers, found luck again at Golden, this time landing 2 striped marlin of about 120 and 150 lbs each and 1 dorado of about 10 lbs, which hit on ballyhoo bait. The Yahoo was our top marlin boat this week with 18 marlin caught and released. 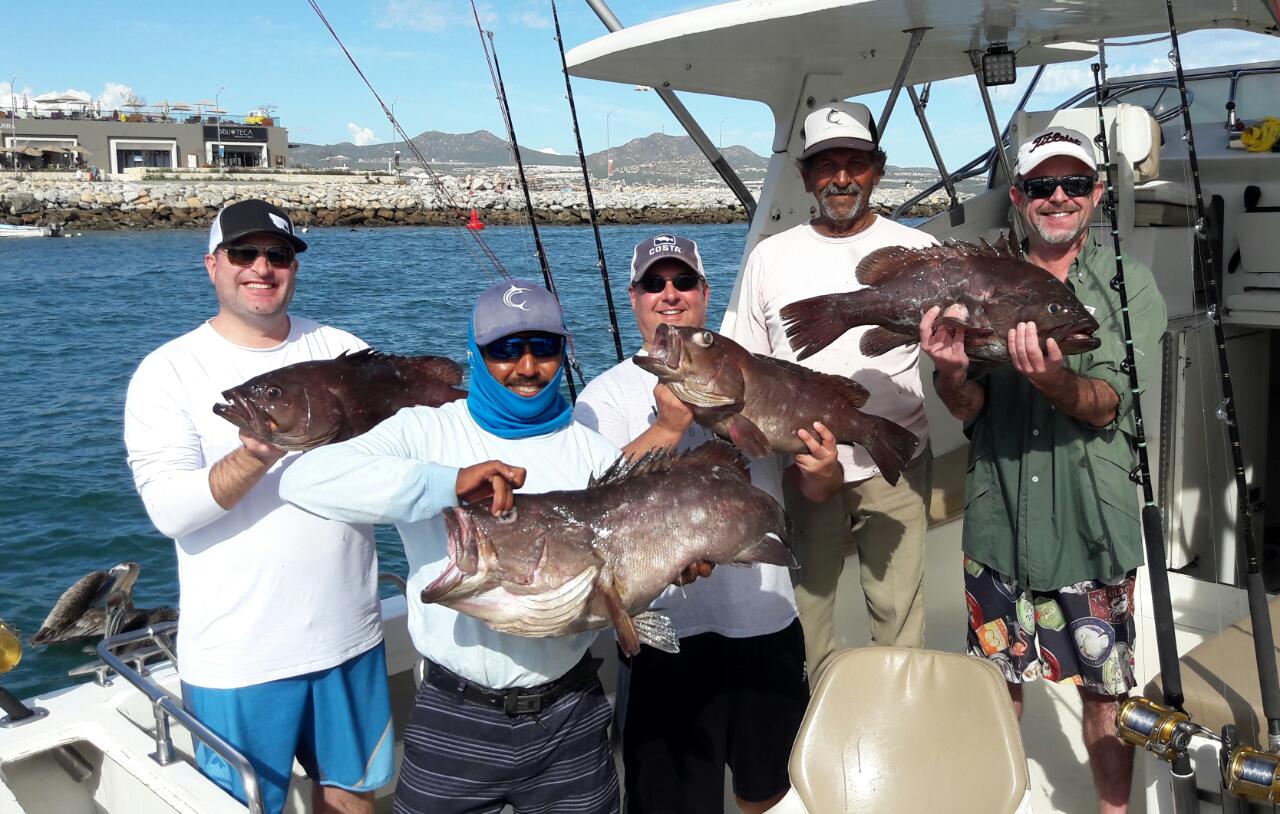 As for small game, there’s been a little bit of everything still, making it very fun for anglers.For example, the 28ft Pisces Adriana headed out to Golden Gate and caught 1 striped marlin of about 110 lbs which they released, and then headed closer towards shore, in from Golden. There they caught 1 rooster fish of about 10 lbs on mackerel bait, and 6 decent sized red snapper and 4 triggerfish by chumming.

Pisces boats caught a total of 337 fish this week. Striped marlin accounted for 107 of these, tuna were 108, dorado 40 and small game or other species were 82.

WEATHER CONDITIONS: Clear and calm mostly; except one day of rain and some wind.