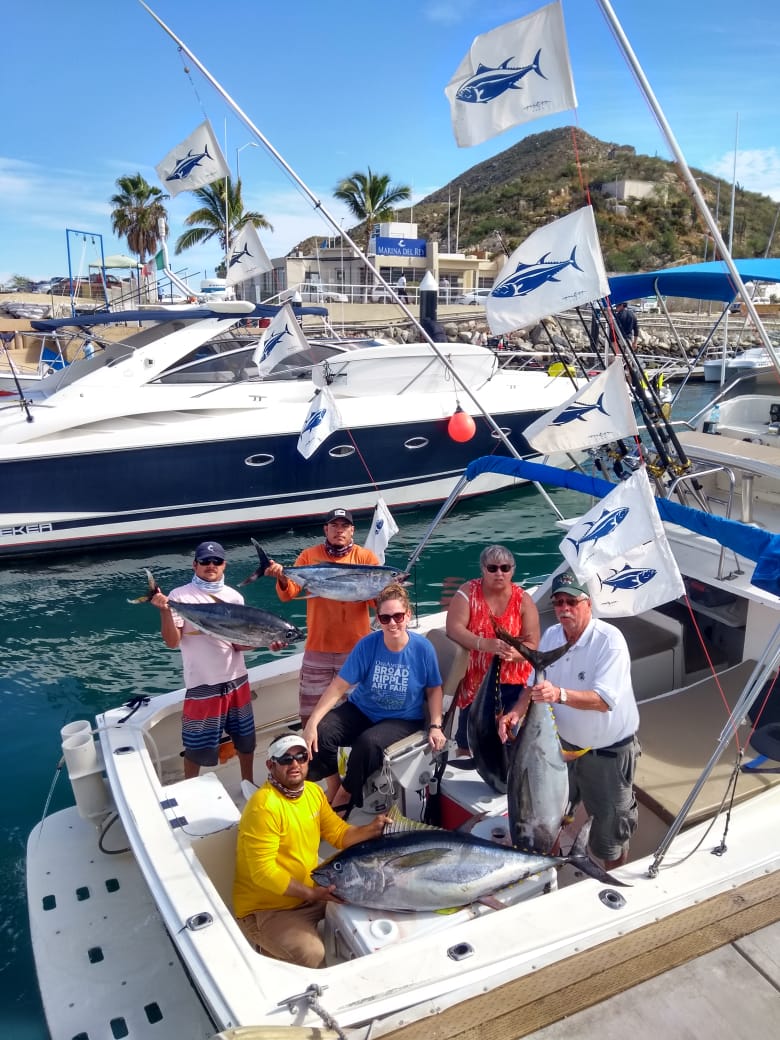 Another beautiful week of fishing in Cabo San Lucas to report here. Successful fishing, no matter what species was targeted, but with higher and more consistent numbers of marlin than any other species. The crews are finding the marlin now very close to Lands End, with the Finger Bank (which we thought was starting to slow) now picking back up as weather has warmed slightly again. Yellowfin tuna still found in decent sizes, ranging from 30 to about 100 lbs each, but with anglers heading about 30 miles out to find them. Scattered dorado catches, and very nice catches of smaller game like grouper, roosterfish, red snapper, sierra mackerel, skipjack and others.

For marlin fishing close by, we had a top day’s catch of 12 Striped Marlin released on Pisces 31′ Ruthless on January 9th, by lucky anglers the Dunn family from Charleston, South Carolina. This was a one of our top producing days for marlin this week, as Pisces 31′ Rebecca caught and released 7 striped marlin and 1 sailfish too, this time by solo angler Jon Svedsen, from Phoenix, AZ, who had his work cut out for him! The marlin ranged in size from 30 lbs all the way to 150 lbs each, and the sailfish was quite large, about 110 lbs approx. They used mackerel bait for all fish, usually dead and weighted or live when the marlin was seen on the surface; out in front of the Old Lighthouse. Others like Pisces 28′ Adriana, released 5 Striped Marlin, with fish averaging 100 lbs. Anglers were Conor Nelson and Ross Kline from Reno, Nevada. While Pisces 32′ Bill Collector caught and released 8 striped marlin, with the largest of about 180 lbs. They too fished the Old Lighthouse, and also headed a bit further down the coast to Los Arcos, using mackerel bait. The anglers were the Blackhart’s and Nelson’s from Nevada. Pisces 31′ Cabolero also caught and released 8 striped marlin for anglers Brian and Trevor McAlister and Mateo Zumpano from Whistler, Canada. Marlin ranged in size from the smallest of 50 lbs, to the largest of about 180 lbs at the Old Lighthouse on mackerel. 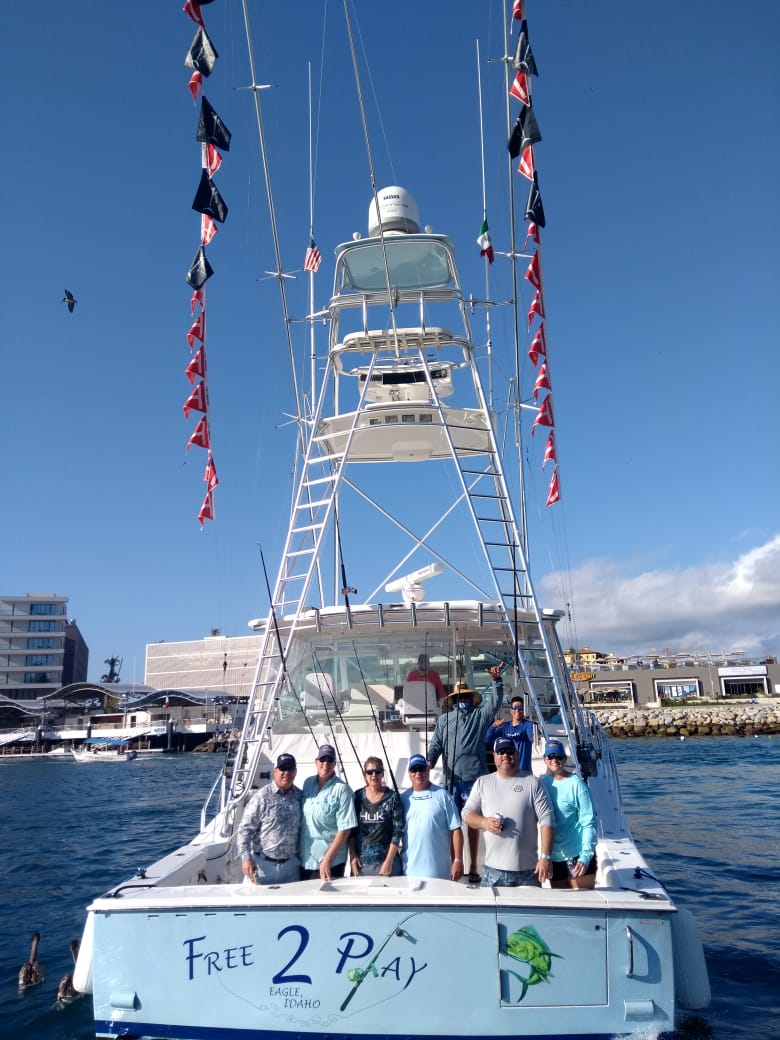 Pisces 52′ Free 2 Play also did well this day with 7 striped marlin released ranging from 80 – 120 lbs each, using mackerel at the old Lighthouse. The next day this boat would head to the Finger and come back with 25 Striped Marlin release flags.  A great job by anglers Andrea and Jim Shilston, Diana and Doug Tomberlin and Leigh and Troy Turner (whose birthday they were celebrating and celebrating right!). The fish averaged about 100 to 120 lbs each and hit on live mackerel bait.

Pisces 37′ Tag Team III was also on a roll this week, with 6 striped marlin caught on ballyhoo bait at the Old Lighthouse between 80 and 100 lbs each. They also landed 2 bonitas on mackerel bait. Later in the week, they fished the Finger Bank, with 21 striped marlin released by Anders, Honor, Jamie and Kristen Coulter from Montana. The Tag headed up again the next day, this time releasing 24 Striped marlin ranging from 80 to 120 lbs. 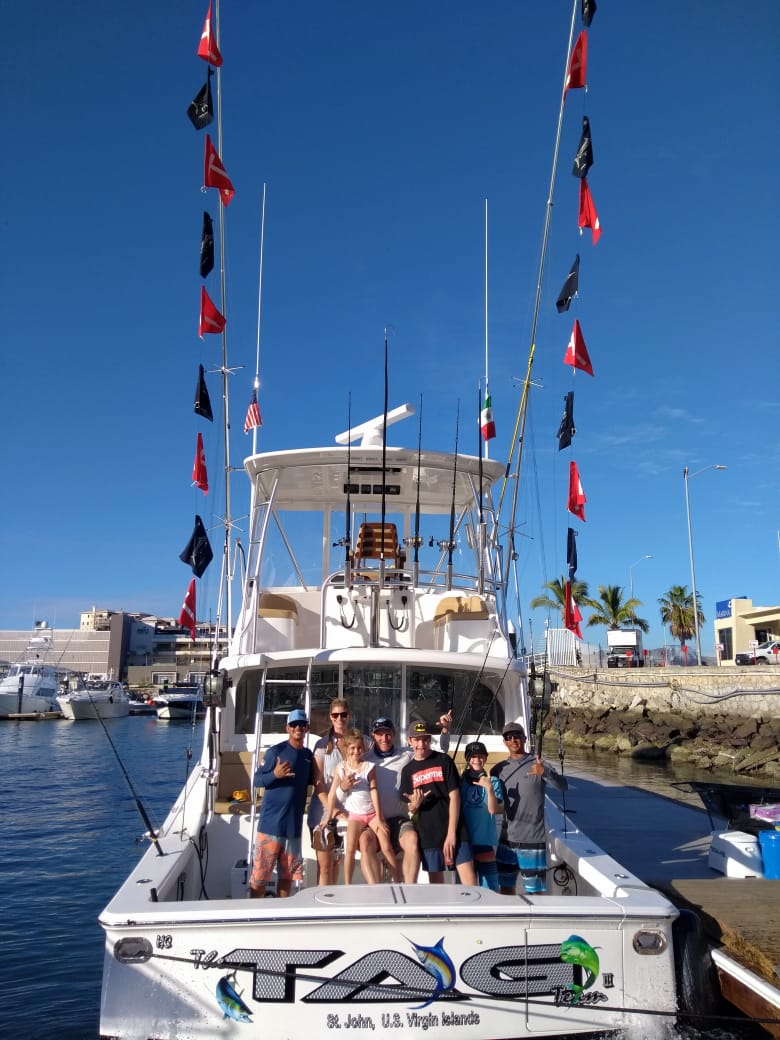 Not only did we see large amounts of marlin released, but we had the fair share of yellowfin tuna too. Pisces 31′ Rebecca caught 6 yellowfin, with the largest hitting 86 lbs on the scale and the others ranging in size from 30 to 70 lbs each. The fish hit on cedar plugs, and guacamayo lures out at the 110 Spot. Anglers March Schloss and Paquale Travolino also released 2 striped marlin on mackerel at the Old Lighthouse on their way out.

Pisces 31′ Ruthless  had a great day for tuna as well, catching 14 yellowfin tuna for anglers Margie and Meredith Bledsoe and George Schul. They did a great job of angling the fish, with the largest tuna weighing 93 lbs. Others ranged in size from 30 to 70 lbs each. The tuna hit on cedar plugs, feathers and green lures about 30 miles out, at the 180 Spot. 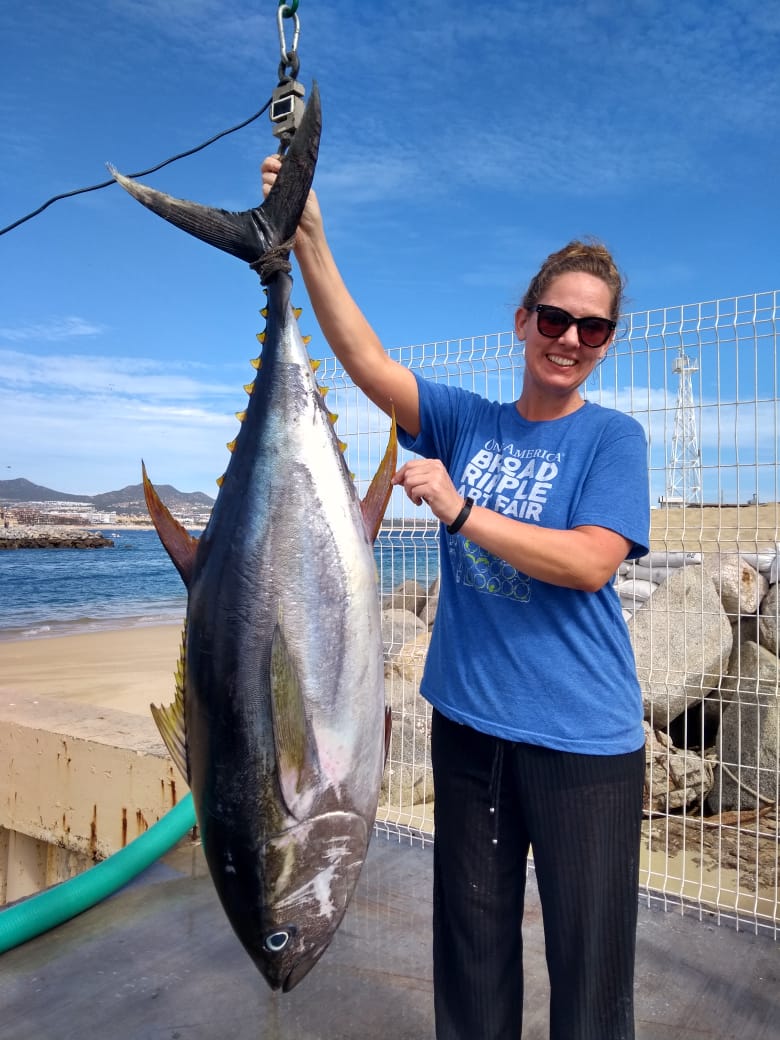 Pisces 31′ Tiburon caught 11 yellowfin from the Hutton family from Colorado on January 5th, with all around the 30 lbs mark. They found these at the 160 Spot, using cedar plugs and feathers.

Another great day for Pisces 38′ BajaMark this week too, releasing 5 striped marlin on mackerel at the Old Lighthouse and then heading to Las Margaritas to catch some eating fish. They landed 3 grouper or about 20 lbs each and 16 ladyfish (some released) all by chumming. Anglers were Annette Montgomery, Erik, Jed and Renee Hoovesstol from Arizona. 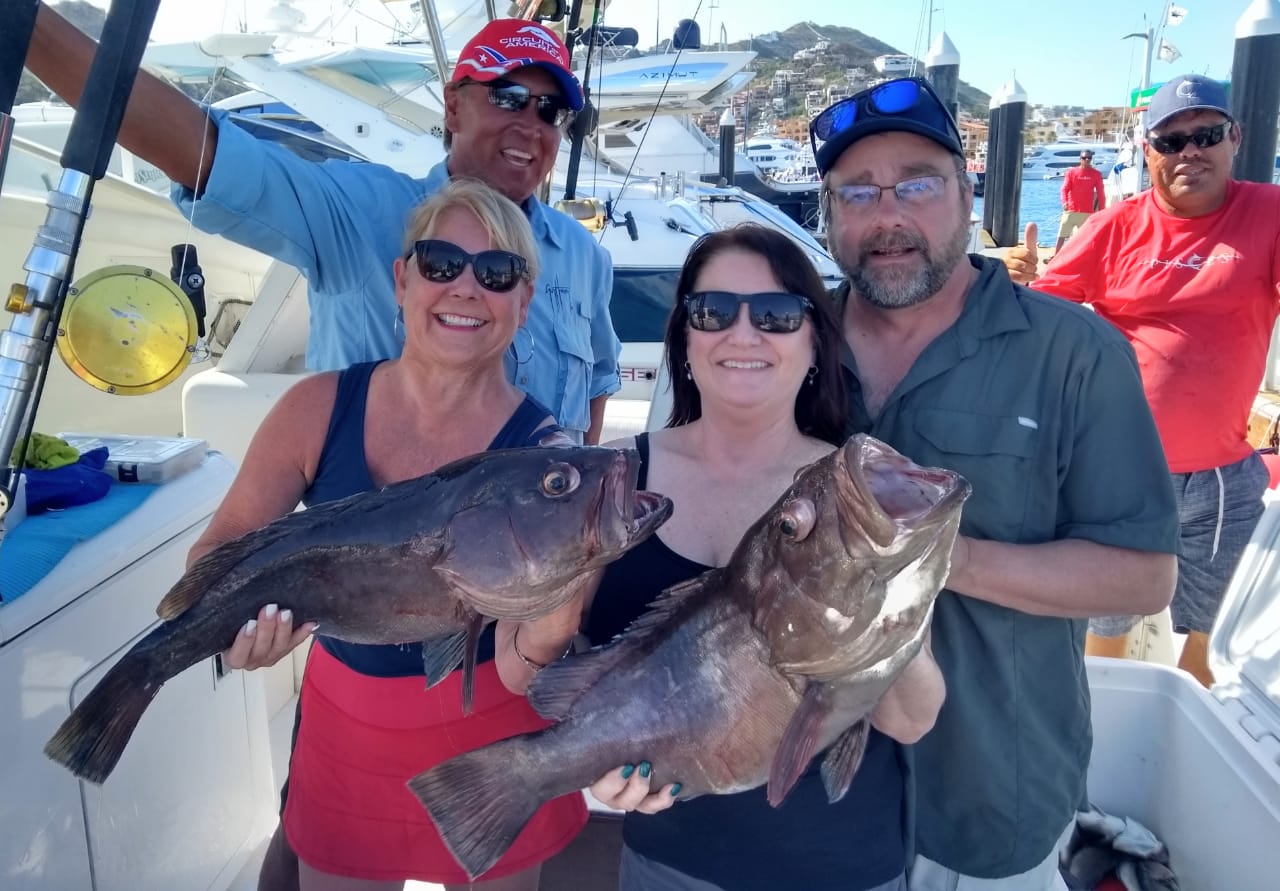 We also saw some dorado this week, with one of our top boats, the Pisces 35′ Valerie catching 2 dorado of about 15 lbs each with live mackerel bait and also releasing 4 striped marlin by slow trolling weighted mackerel bait at the lighthouse. Anglers were the Tellez family from USA. Later in the week the Valerie would do well with marlin, releasing 2 stripes at the Old Lighthouse on mackerel again, and then heading for sierra mackerel at Migrino; keeping 6 total of about 5 lbs each. 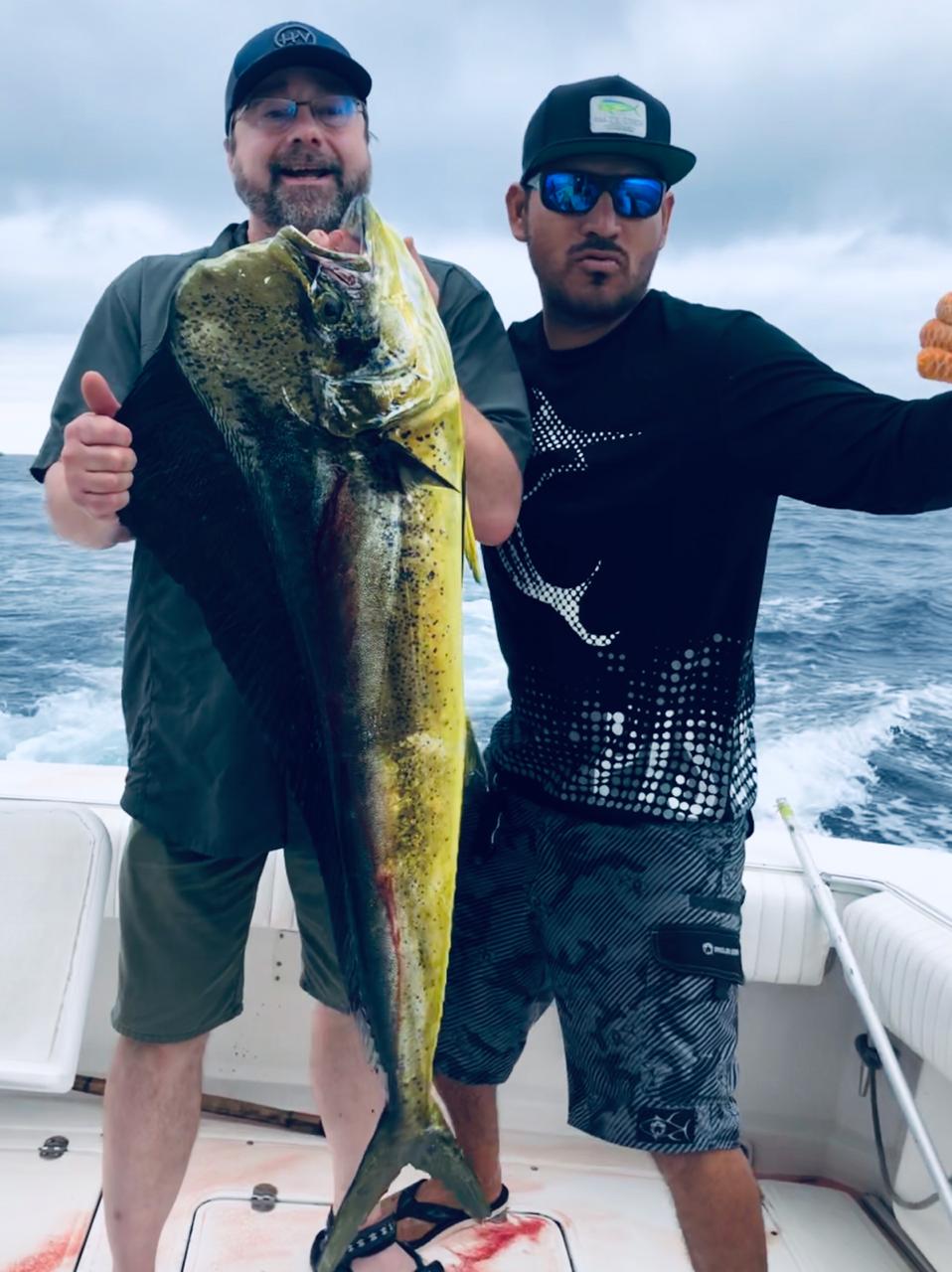 Pisces 38′ C Rod had some good dorado days this week, along with multiple marlin releases

Pisces 27′ Panga Tres Amigos also caught a nice sierra with angler Alan and Lissette Barton, who also released 1 roosterfish of about 25 lbs at the Old Lighthouse. More roosterfish for Pisces 24′ Panga Anamar, with Jim Herny and Melanie Mayer releasing two of about 20 lbs each at las Margaritas. The next day Anamar and angler Troy Turner, who fished on the Free 2 Play previously caught 2 dorado of about 10 lbs each on lures at los arcos, as well as 2 red snapper on caballito and 2 roosterfish of about 15 lbs each, which he released at Las Margaritas. 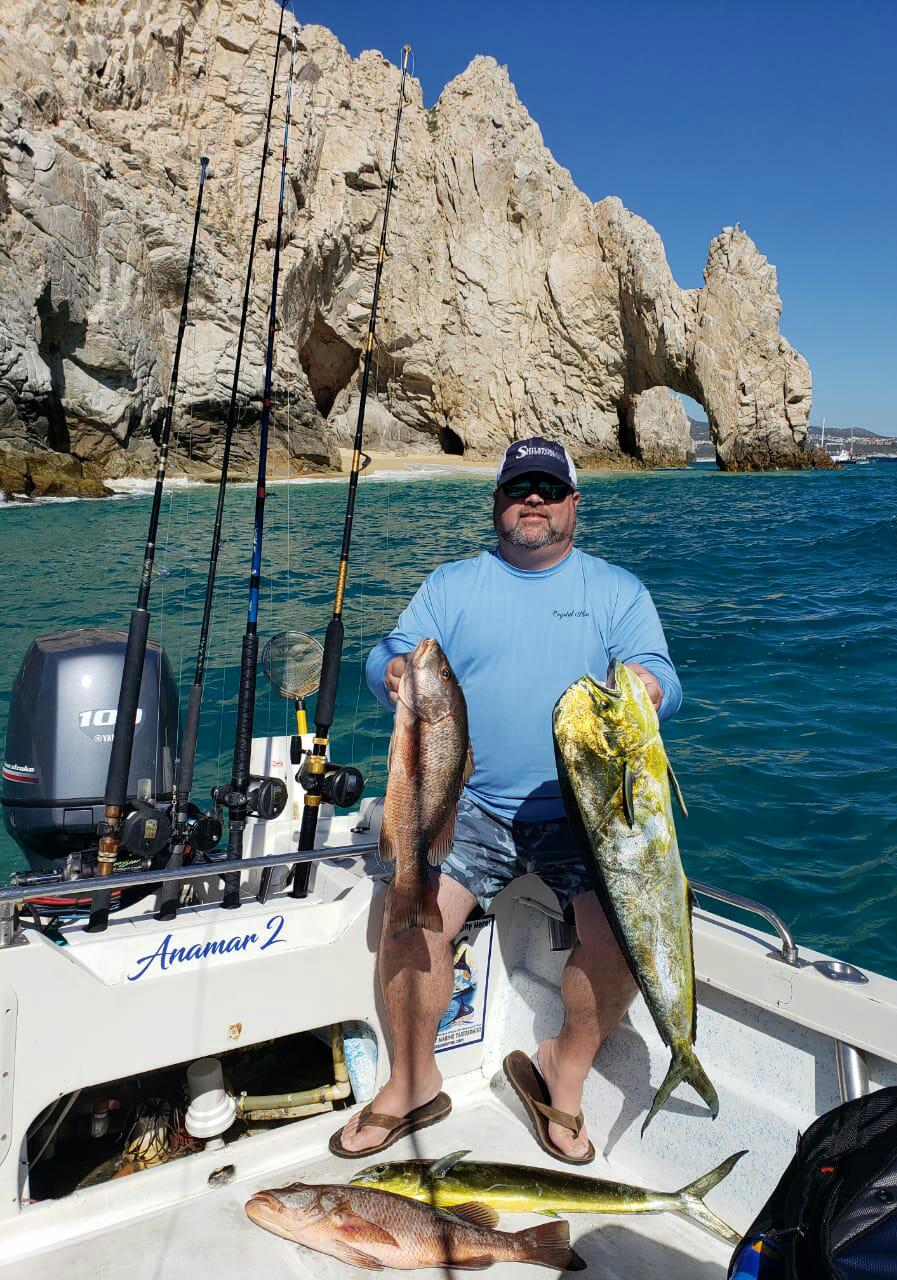 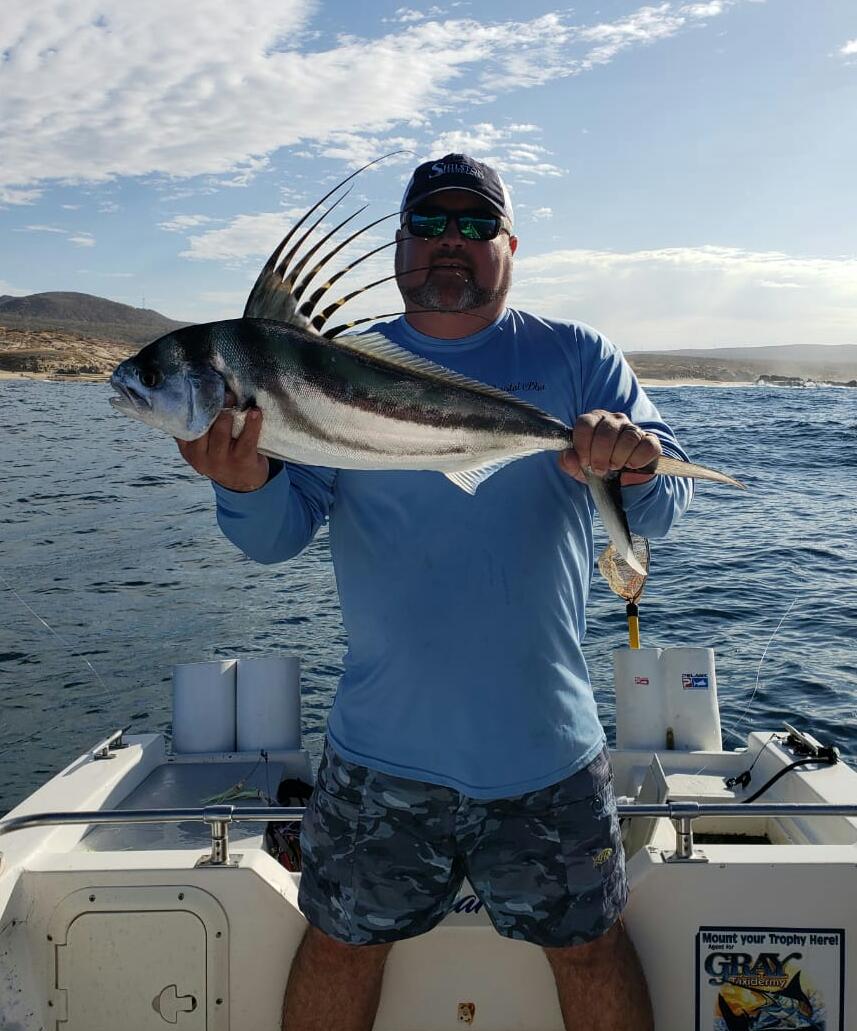 Angler Troy Turner was on fire this week, here he is showing off a good day’s catch and holding one of his two roosterfish caught and released

WEATHER CONDITIONS: Calm overall, wind only on 1 or 2 days this week picking up in afternoon.