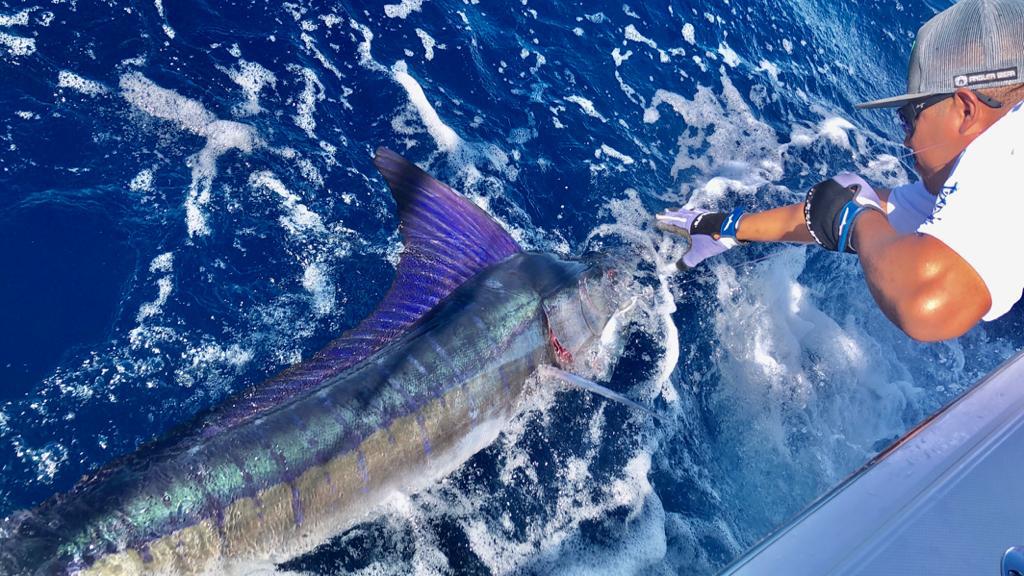 Good fishing continues in Cabo, with Dorado and Tuna being the most productive fish still. Total Dorado numbers hit 234 fish, with many of those released to respect catch limits, and Tuna 386. 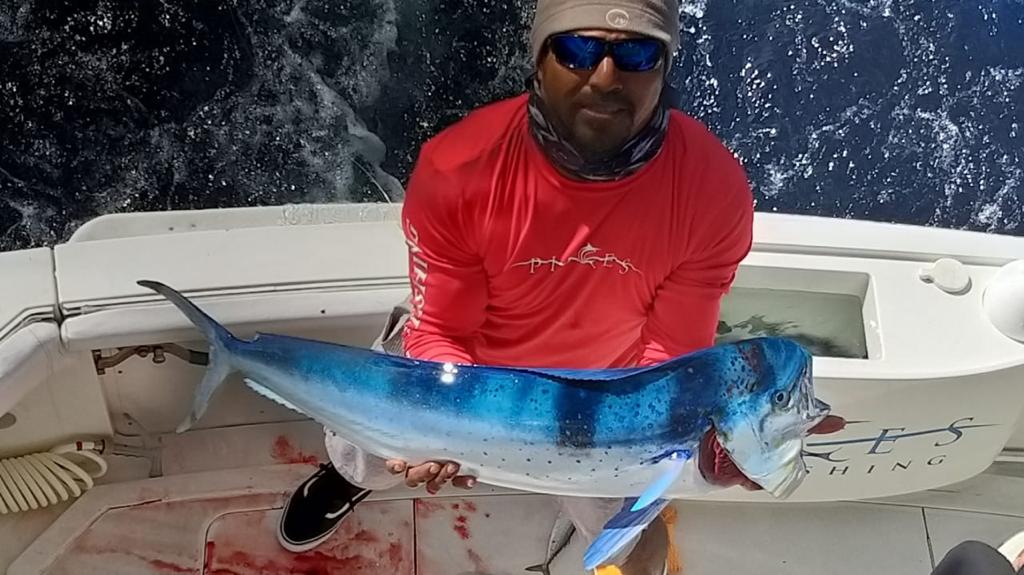 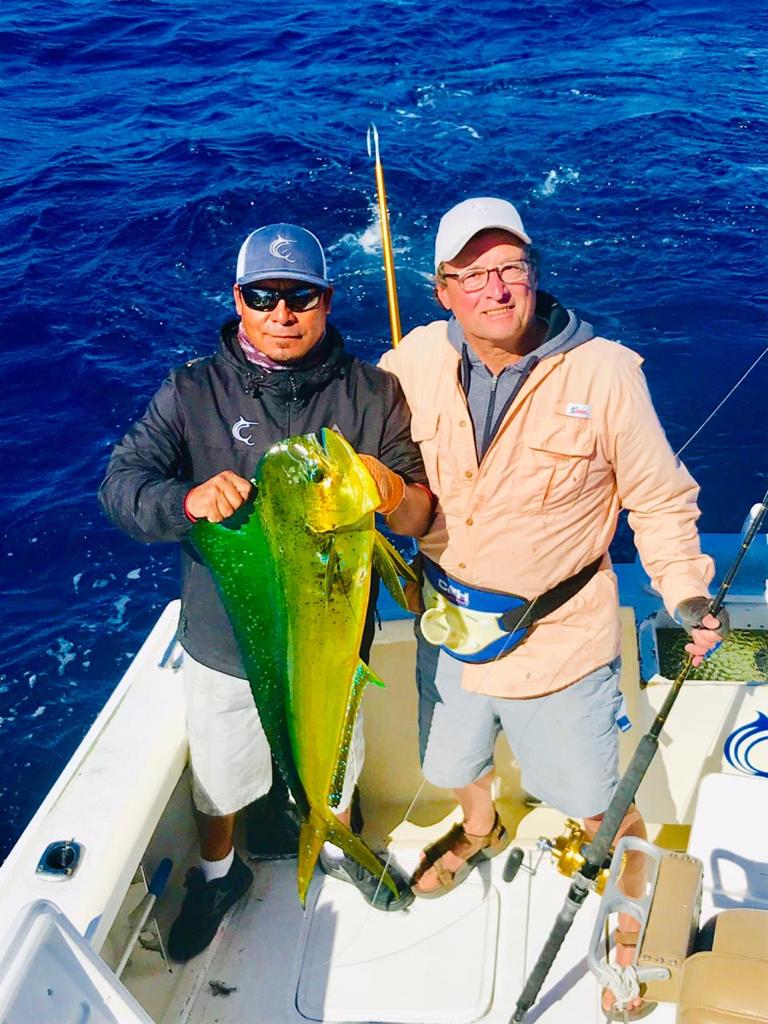 Beautiful Dorado’s caught on board Pisces 30′ Karina (top) and

Pisces 30′ Karina did well to target all the top species this week, releasing 1 Striped Marlin of about 120 lbs which hit on green/yellow lure, along with a 20 lbs Dorado and 16 Yellowfin Tuna! Dorado and tuna hit on cedar plugs and hoochi lures at Golden Gate for Ruth and Tim Murphy.

We did also see Billfish pick up coming into the weekend, almost solely Striped Marlin. Pisces 31′ Tracy Ann  had a quadruple hook-up one day, releasing 5 total and keeping 9 Dorado, and the next also released 5 Striped marlin and kept 3 dorado! All fish landed at Golden Gate, using live and dead mackerel bait mostly. 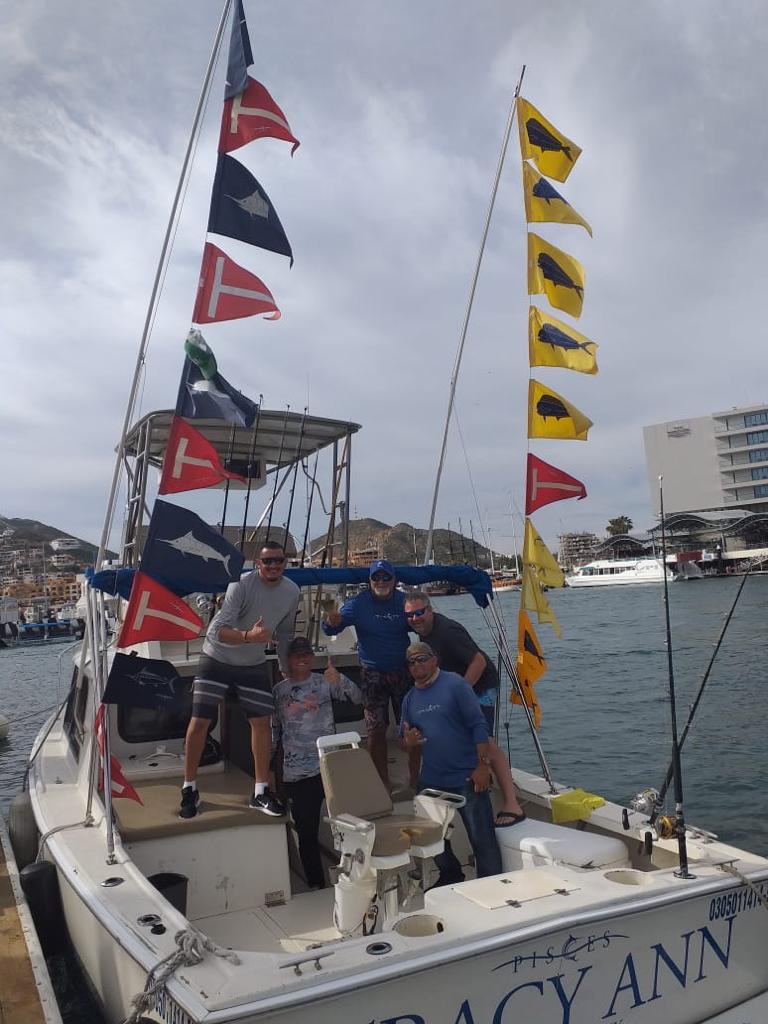 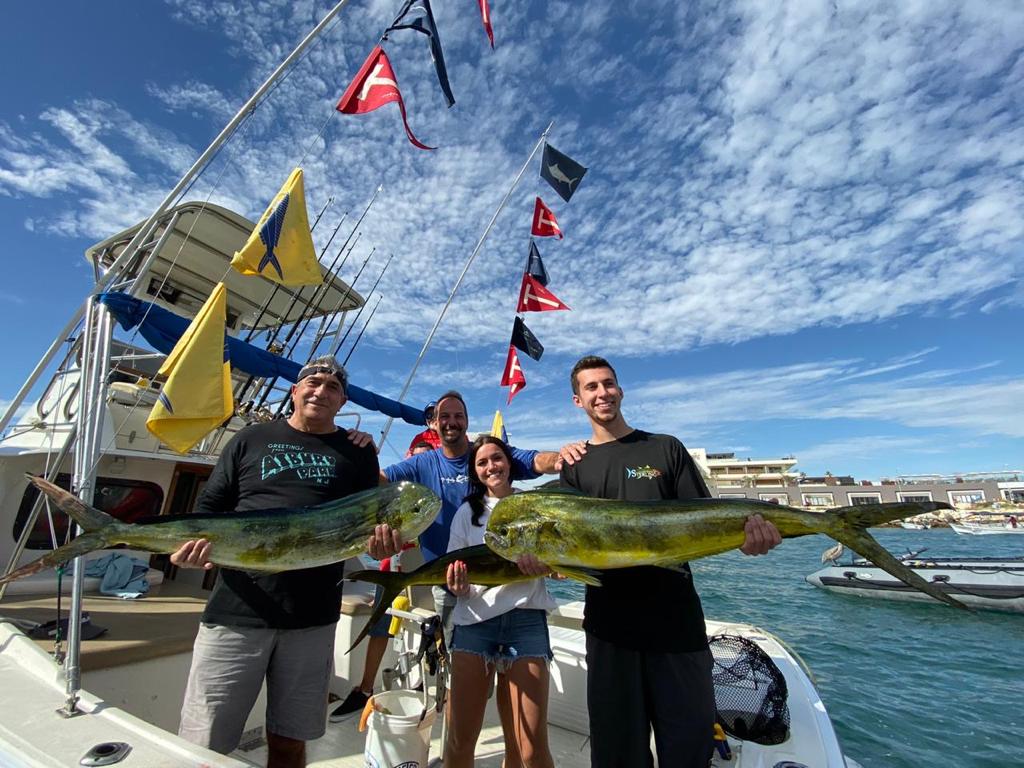 Pisces 38′ C Rod also did well with marlin, also with a triple hook up and releasing 4 Striped Marlin total ranging from 100 to 130 lbs each, which hit on live mackerel bait, and anglers from Texas also kept 2 Dorado close to 20 lbs each; all at Golden Gate. 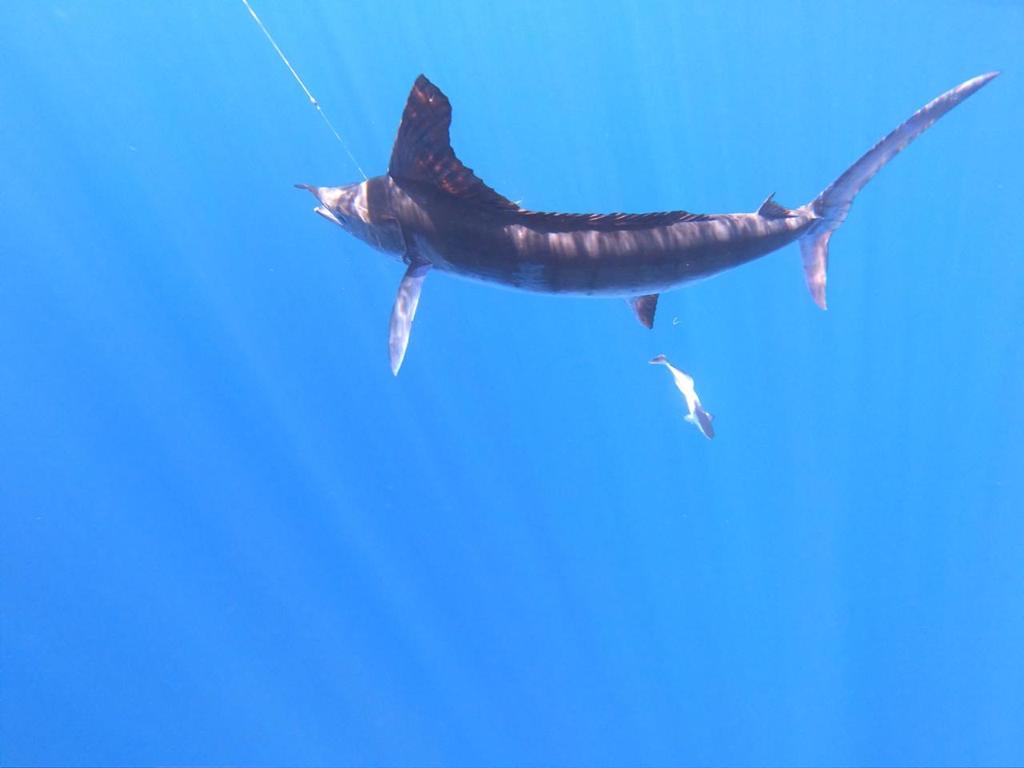 Pisces 38′ C Rod released 4 Striped marlin in one day, including this one without a bill!

We had a total of 56 Marlin caught and released for the fleet and Unexpectedly, around 6 Spearfish caught and released in the past two weeks, which is very rare for our Cabo fishery. In past years, we would maybe catch 2 to 4 of these for all of Cabo alone. Pisces 31′ Tracy Ann had a 90 pounder last week, and again this week Pisces 32′ Bill Collector  released two in one day (and lost another). 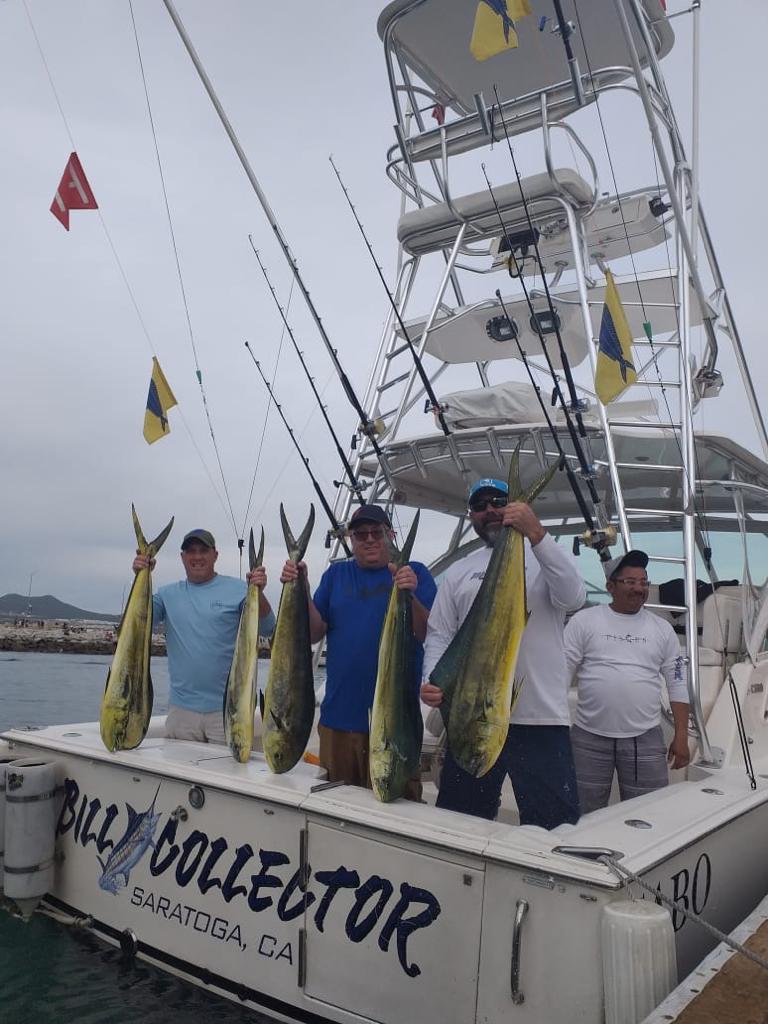 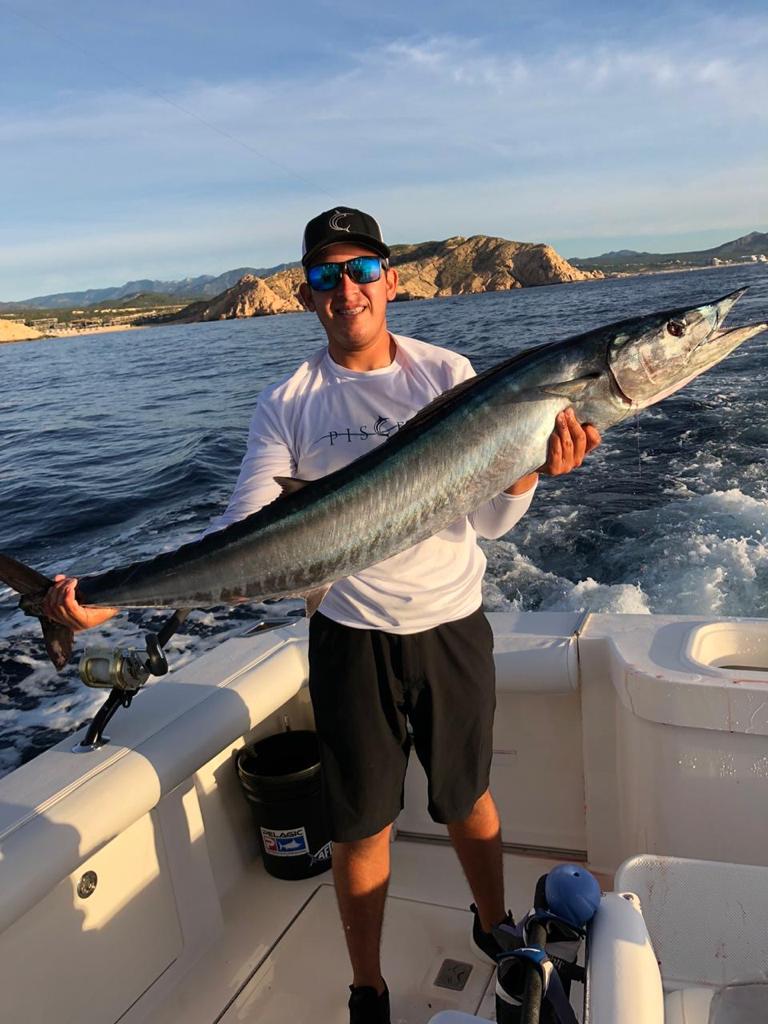 Mate Ronaldo Castro shows off a nice Wahoo caught aboard
Pisces 35′ Bill Collector 2 along with some nice Dorado too.

There have still been some scattered Wahoos and a few Roosterfish showing up too. Mainly though, catches consisted of Dorado that ranged from 10 to 30 lbs. Pisces 66′ Viking Reels N Dirt impressed, with 1 Striped Marlin released, 1 Wahoo and 15 Yellowfin tuna in one day. All fish landed at the 150 Spot, hitting on dead bait and tuna on cedar plugs. 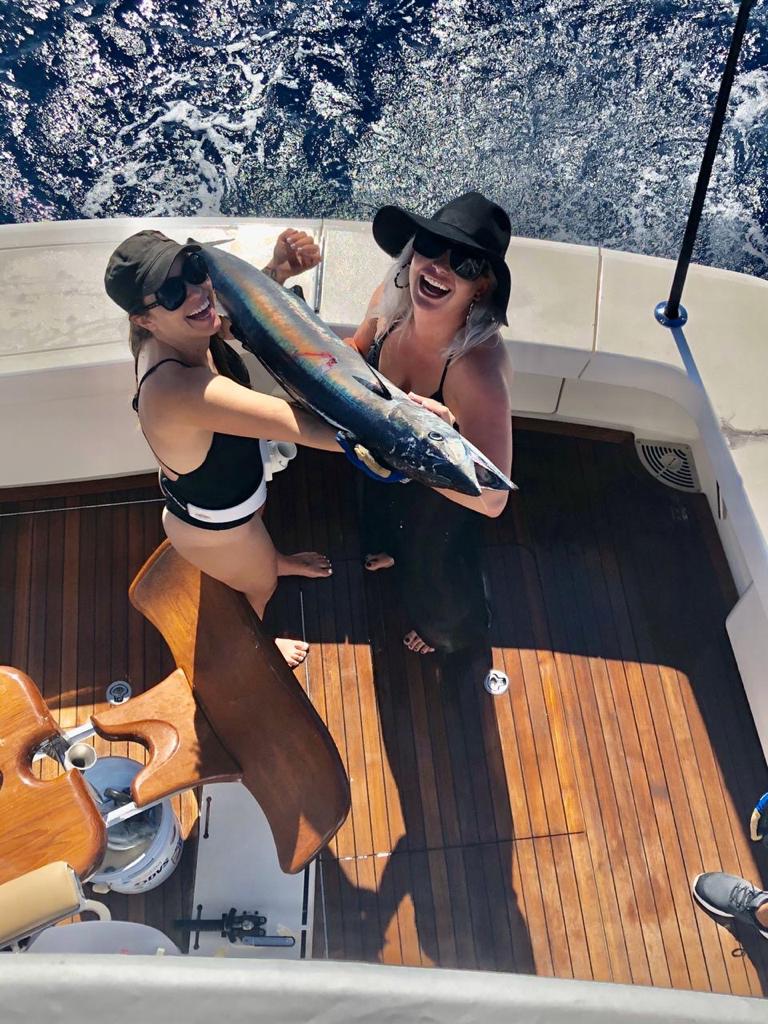 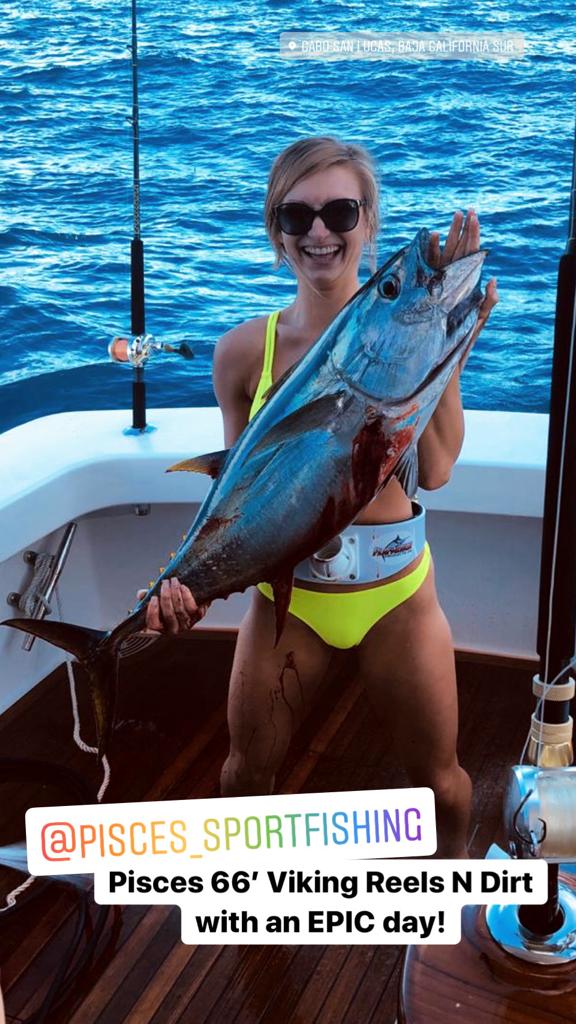 Consistent Yellowfin Tuna catches of up to 20 fish per boat as well, ranging from 15 to 45 lbs each. Pisces 32′ Bill Collector with anglers Gene Lavengco and friends, did well to land 6 Yellowfin between 20 and 45 lbs each; hitting on green, black/red, and tigrillo lures out at the 210 Spot (about 33 miles out).

Gene Lavengco and friends show off some of their tuna

Pisces 60′ Reel Machine landed 21 Yellowfin tuna at the 210 Spot for their anglers too. Mostly good weather in Cabo, although we did have port closed January 10th due to wind. Cooler temperatures setting in, with slightly overcast days. Fishing still focused mostly on the Pacific side, and South of Cabo.