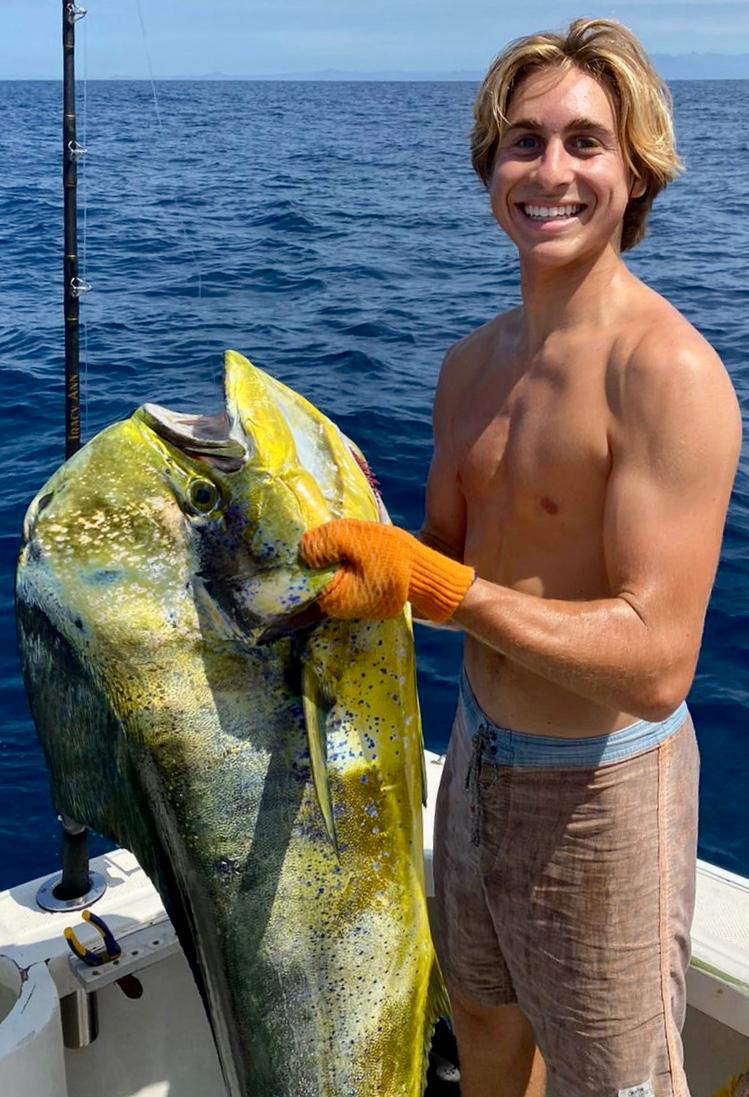 This was one of our BEST weeks of fishing since being back in charter after Quarantine! We caught the first 2 Blue Marlin of the Season, one of 300 lbs, the other 175 lbs. Plus, the Striped Marlin fishing picked up some more too! We had 75 Billfish released this week, which was about 30 fish more compared to last week. For Yellowfin Tuna Catches, we had the same percentage of boats land them, but more fish in comparison: 76 Yellowfin Tuna total. There was only 8 Dorado caught, but they made a splash — Anglers aboard Pisces 31′ Tracy Ann landed a 60 lbs Bull Dorado, and a 25 pounder too. Plus, they released 5 Striped Marlin and 1 Sailfish! Add to that a few Sierra Mackerel and a couple Sharks released for the fleet, and we have had one HOT FISHING WEEK IN CABO. 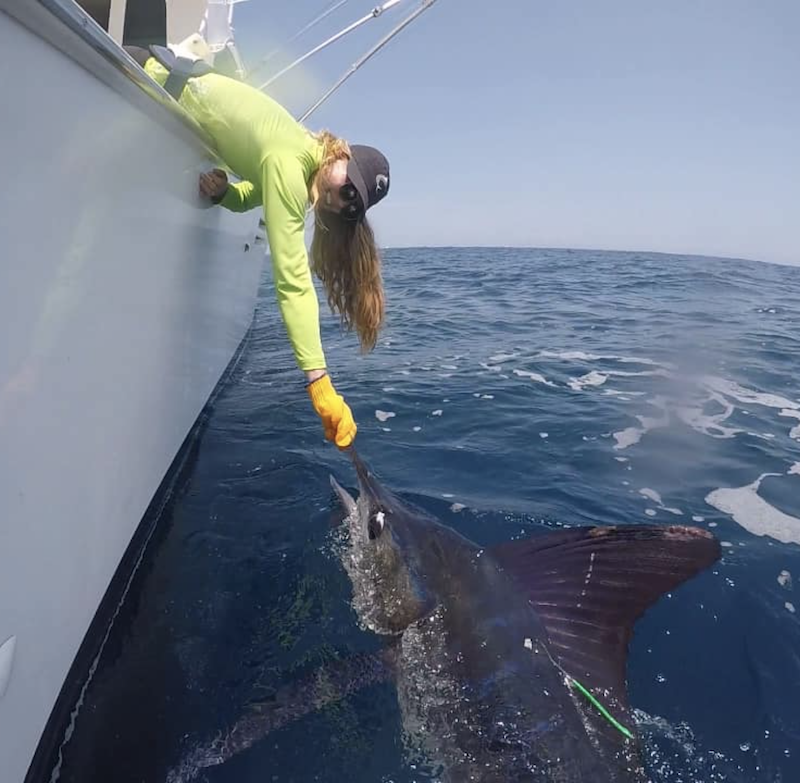 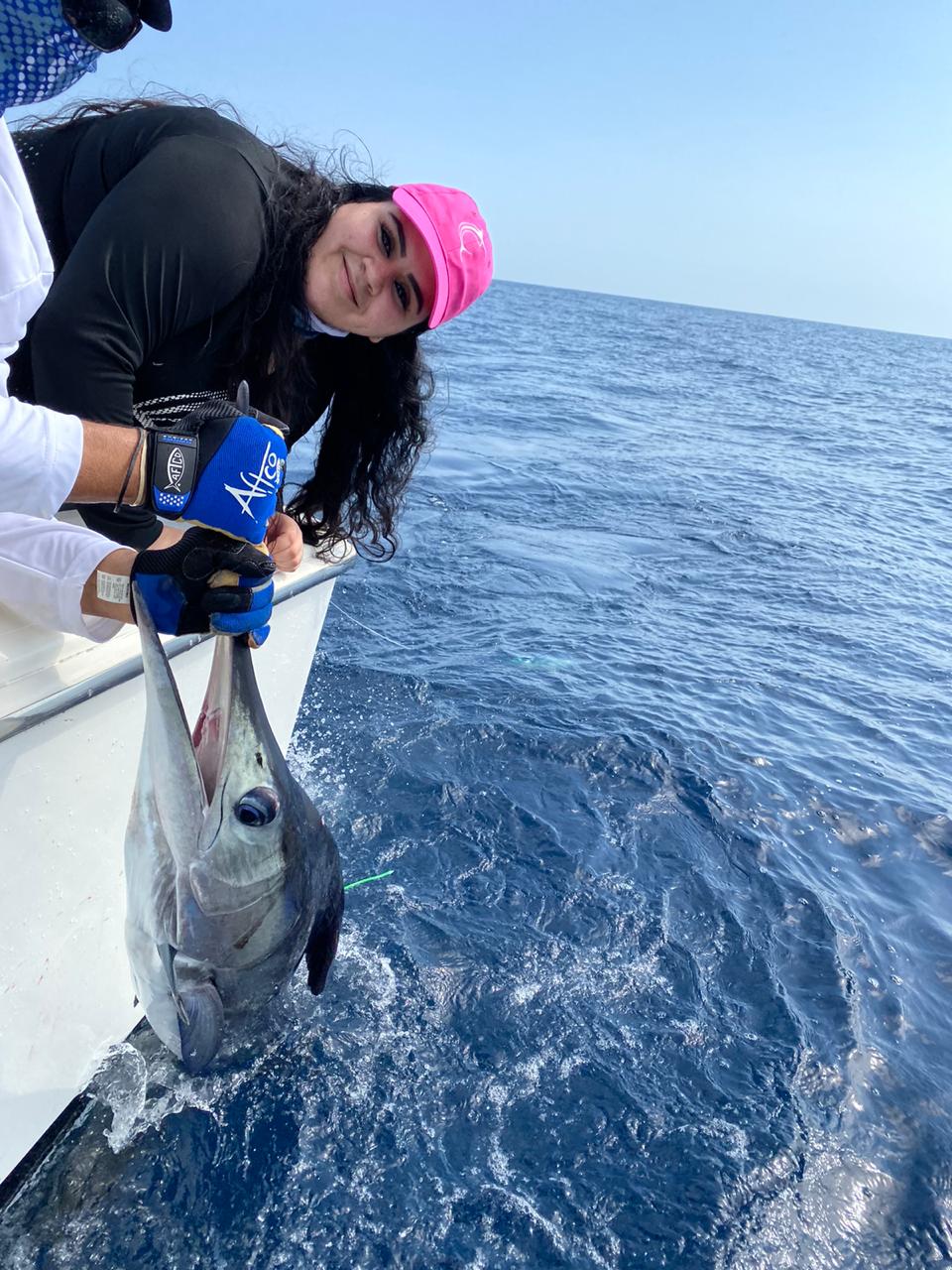 Top Billfish Boat for most marlin caught in one day this week was Pisces 42′ Sea Senora, one of our new vessels added to the fleet. Sea Senora is Captained by Luis Cota, former Mate on Pisces 31′ Rebecca and our #1 Marlin Release Mate of the fleet in 2018 with close to 873 Striped Marlin released in a year. Friday, owners, myself and reservation agent Gabriela aboard, went 8 for 9 on Striped Marlin released, including Gaby’s first Marlin tagged and released as well.  It was a great day out there with nice weather conditions; calm seas, sunny skies, 80F water temp at the fishing ground (about 30 miles South of Cabo). We saw many free jumping marlin, porpoise, turtles, lots of bait. We had THREE Double hook-ups on Marlin which were absolutely attacking our Teaser. We also worked the porpoise trying for Yellowfin but had no luck and couldn’t keep the Marlin off anyway! 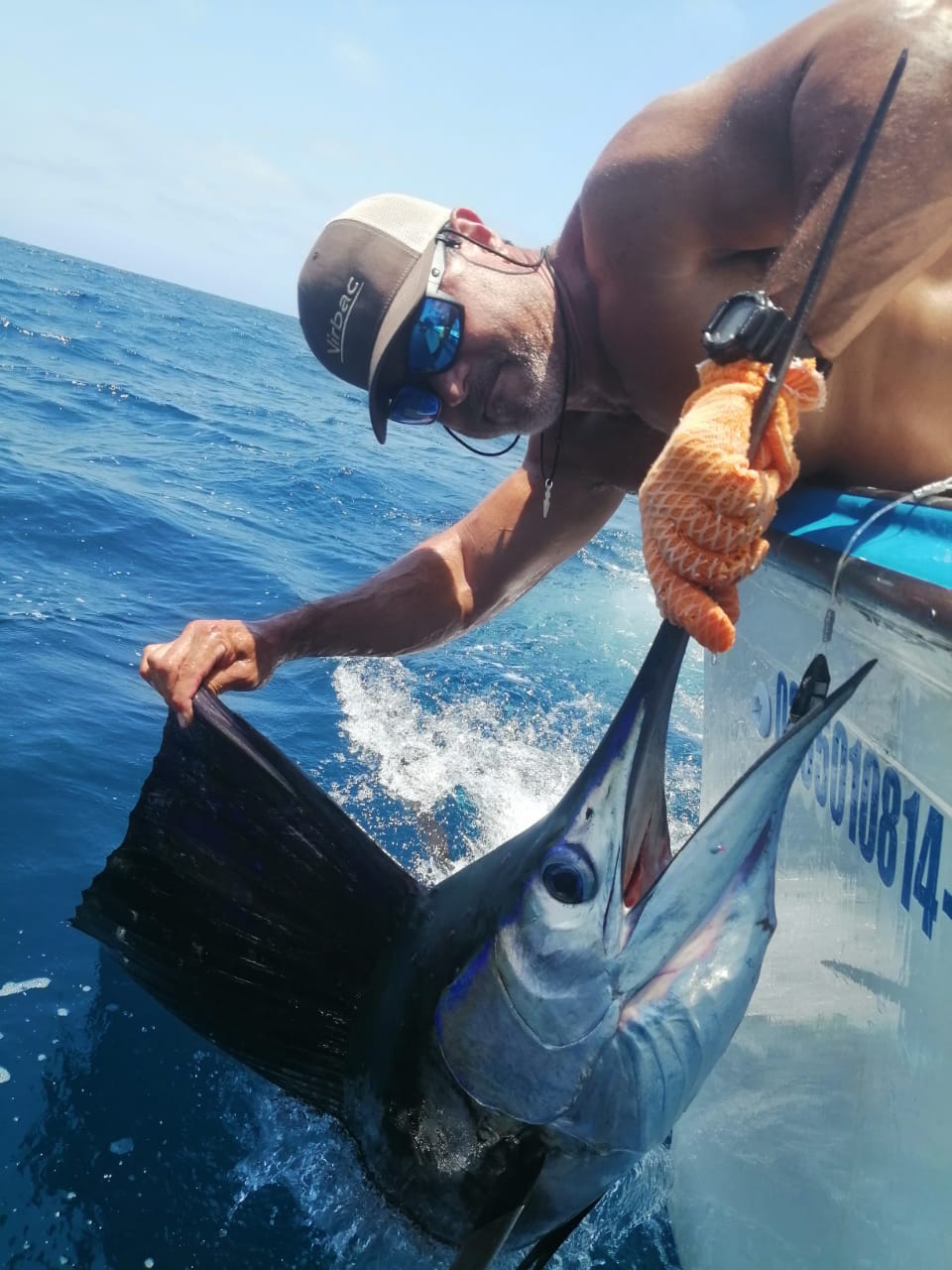 Other boats out that day did have luck with the Tuna, but headed slightly further out to find them, and just this day we had 31 Striped Marlin released, 21 Yellowfin tuna, 2 Sierra Mackerel and 1 Mako Released for 9 boats out fishing. 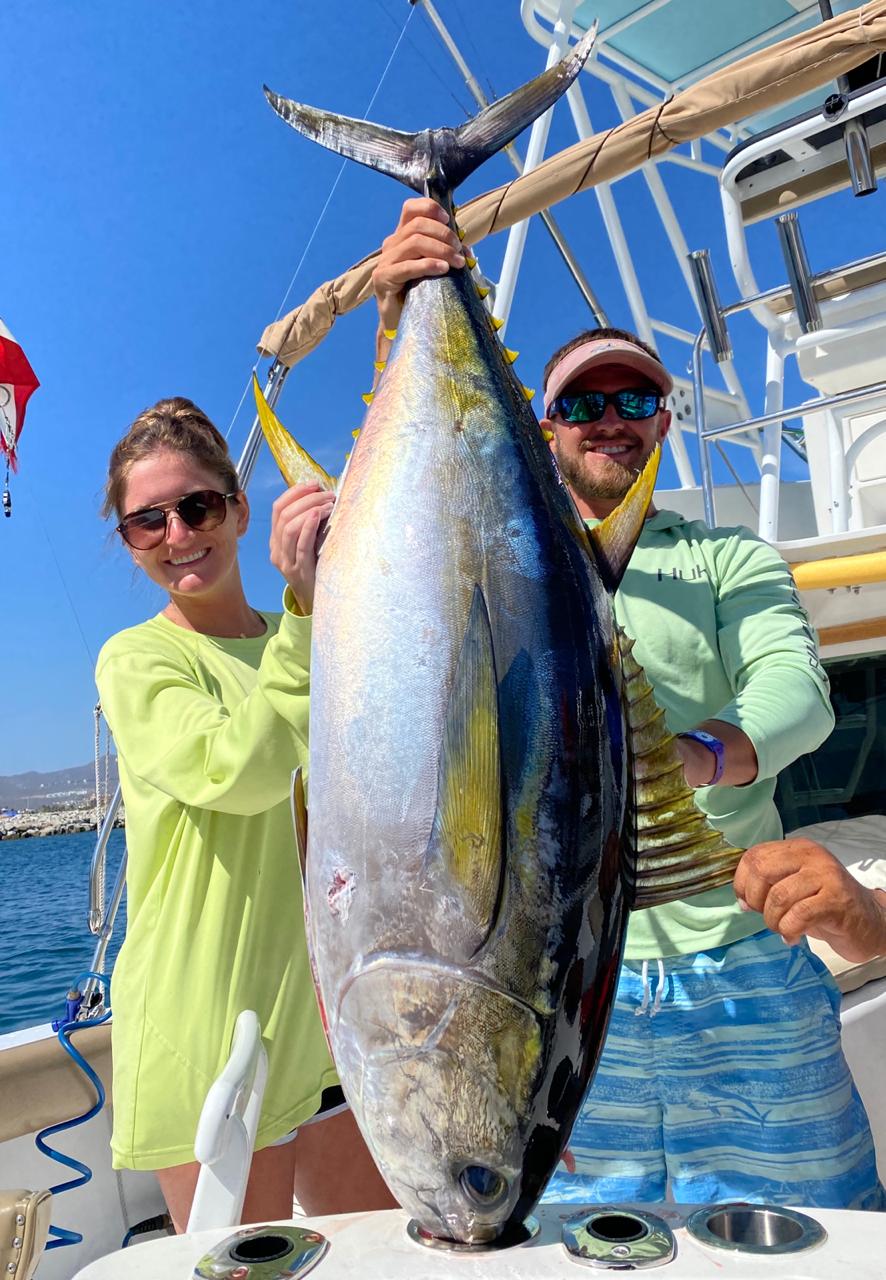 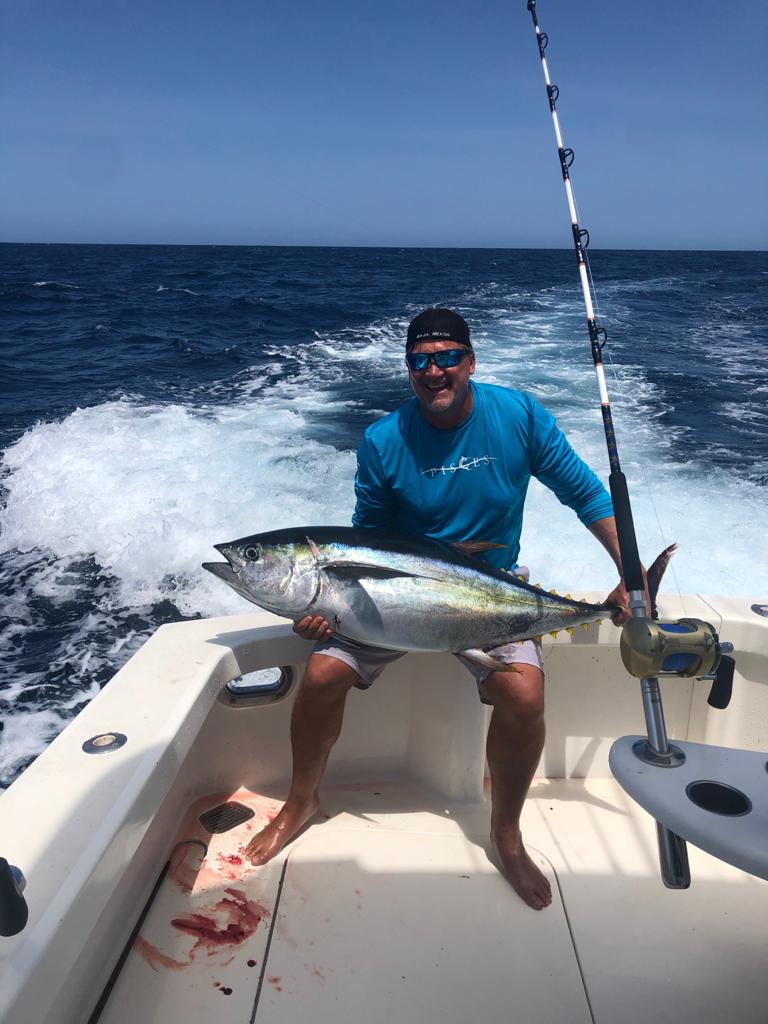 Frank Cvar with his YFT on Pisces 42′ Sea Senora

The next day Pisces 42′ Sea Senora headed out again and found their tuna, an approx. 80 pounder in the same area, plus 3 Striped Marlin Released. Pisces 35′ Knot Workin’ also caught a tuna in this size range, plus 5 others. 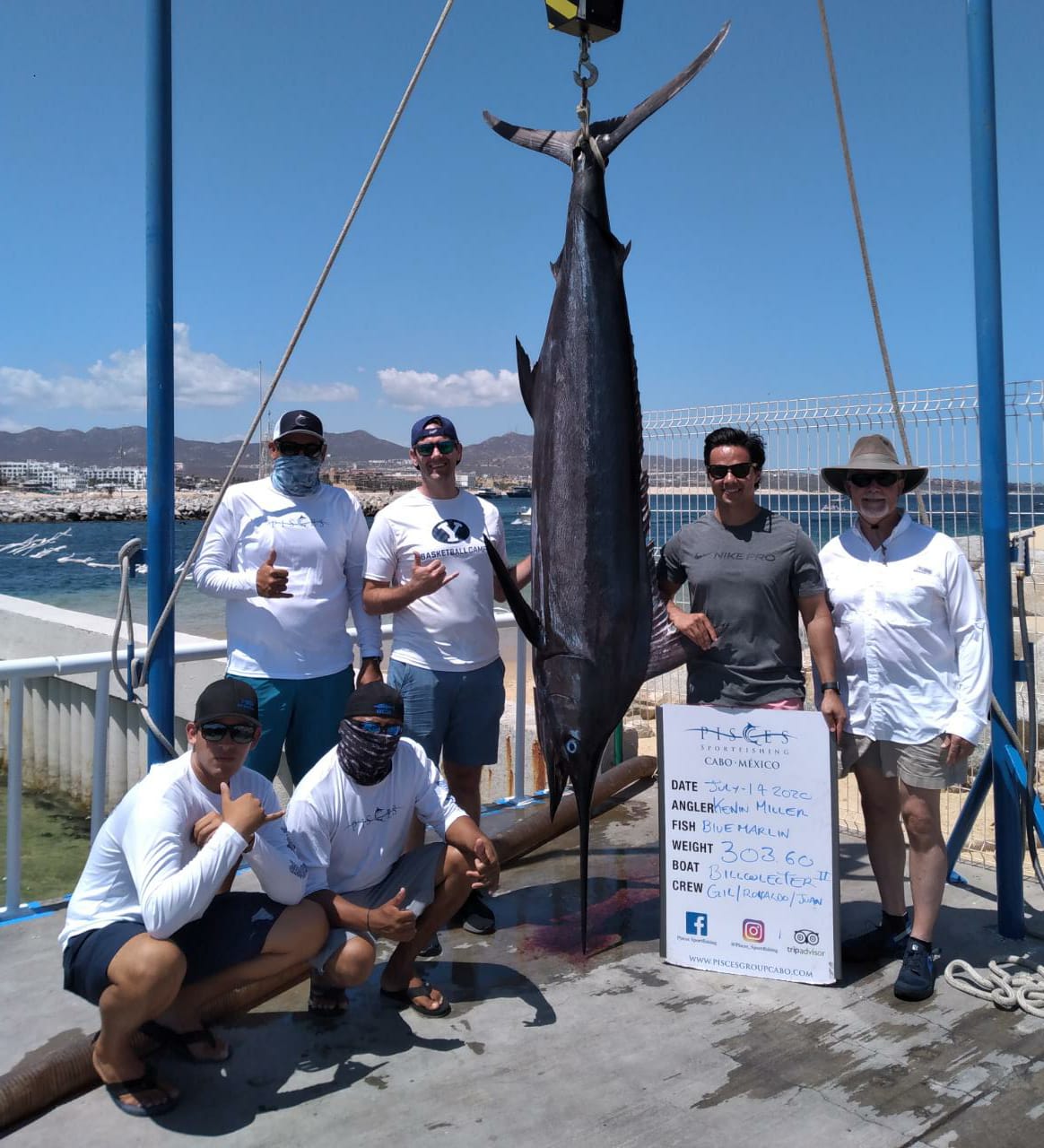 The 1st Blue Marlin this week was caught aboard Pisces 35′ Bill Collector 2, the intent was to release the 300 lbs fish, but it was tail-wrapped and didn’t survive the fight. The fish hit on a guacamayo lure outside of the 210 Spot. Anglers Hal Rosendahl, Jordan Mann and Kevin Miller also released a Striped Marlin and kept 5 Yellowfin Tuna of about 15 to 20 lbs each. 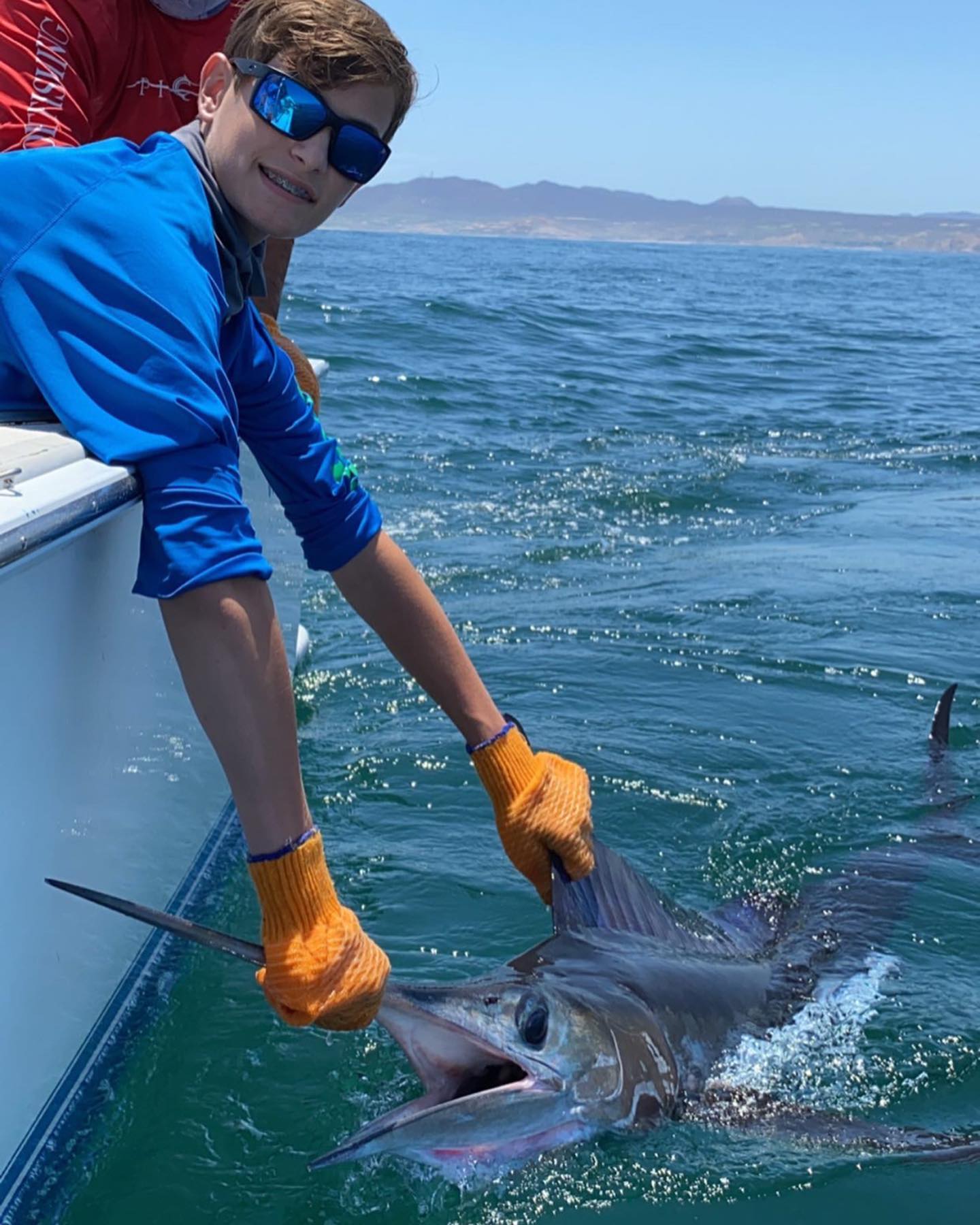 Aiden Schatte with his 1st Striped Marlin Released! 1 of 4 on Pisces 31′ Tracy Ann

Anglers Aidan, Bridget and Jimmy Schatte had a great day two day on Pisces 31′ Tracy Ann and landed not only their first Striped but also their first Blue Marlin with us. 5 for 9 on Billfish Total! All caught close to the Herradura and on dead and live bait. 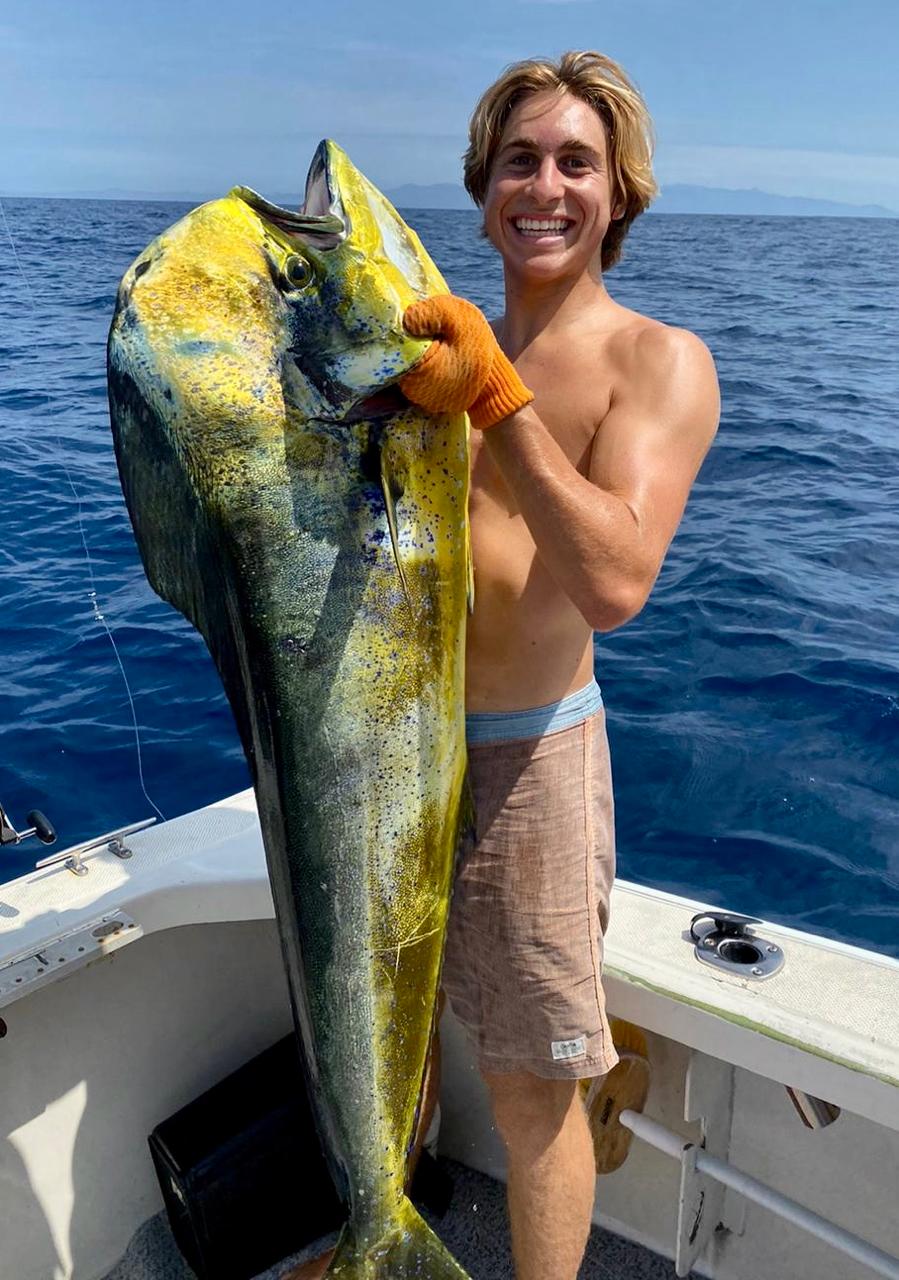 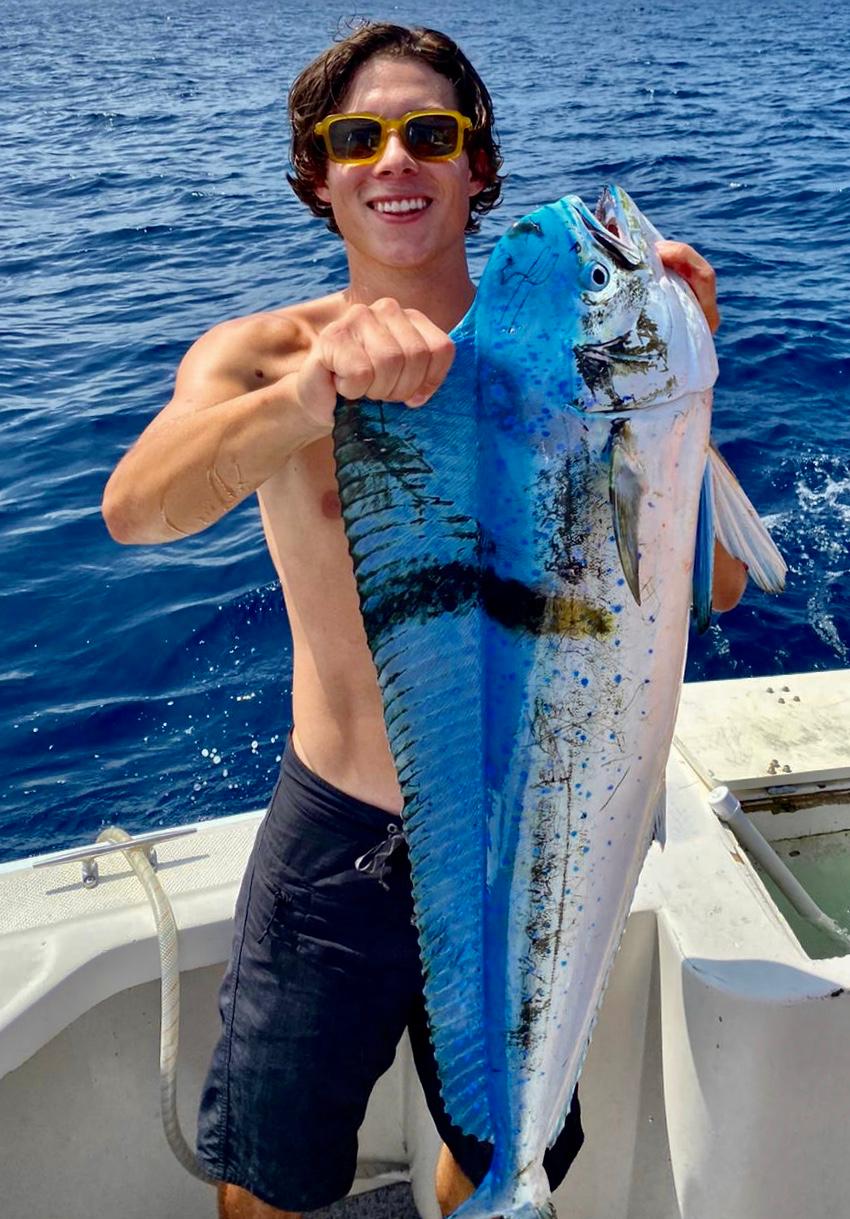 Pisces 31′ Tracy Ann had a total of 15 Billfish this week, 14 Tuna and 2 Dorado, which included a beautiful 60 lbs Bull caught by anglers Darren Deutsch, Sean Lee, Christian and Tony Close. They also landed a 25 lbs Dorado this day, and 5 Striped Marlin and 1 Sailfish Released. All close to la Herradura on live and dead caballito bait.

Longtime Pisces angler Rick Walsh has a great day on Pisces 31′ Tracy Ann with 3 for 4 on Striped Marlin Released and 10 Yellowfin! 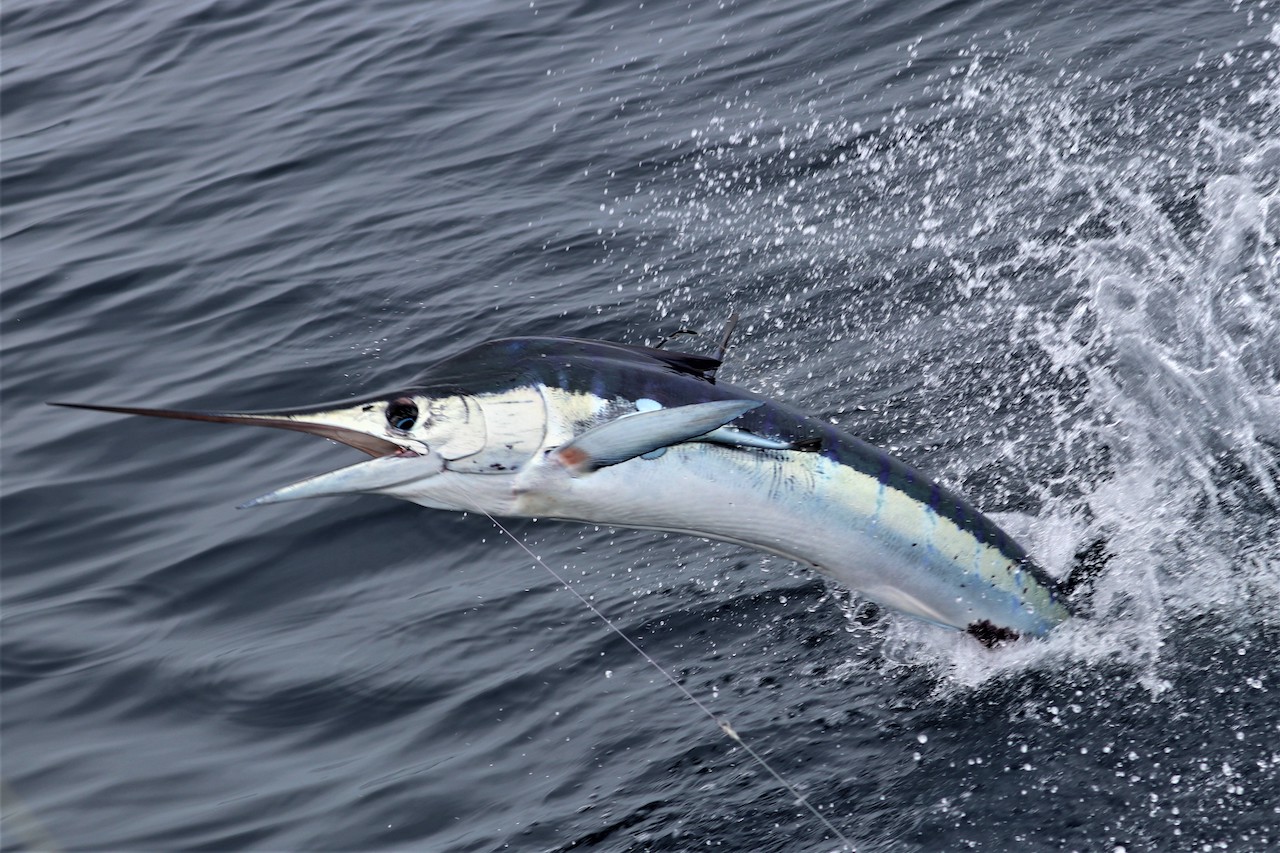