A nice hot Summer week here in Cabo with sizzling fishing conditions. More tuna, and finally the dorado have shown up! Billfish still found South of Cabo; mainly stripers and quite a few decent sized blues too. 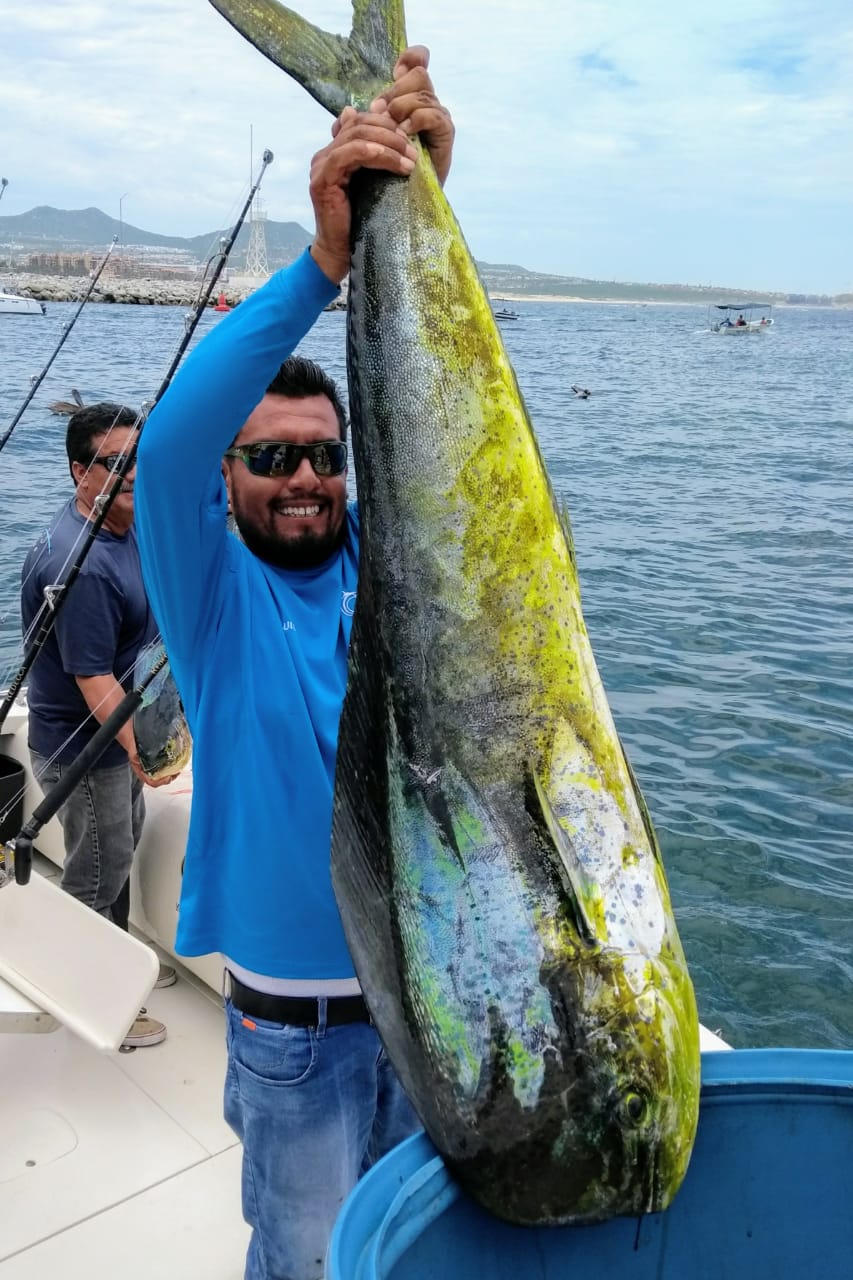 Headlining the fish report again this week is Pisces 38′ C Rod, with crew members leading anglers once again to the blue marlin. The 250 lbs blue marlin was released by anglers the Wheeler and Stettner families from Katy, Texas. The blue hit on a pink feather lure about 25 miles south of Cabo. They also landed 7 yellowfin tuna that ranged from 10 to 35 lbs each.

A fantastic day was had by Pisces 28′ Andrea by anglers Alexis Tolley and Brandon Page from Connecticut on July 15th, with 3 marlin caught, 14 yellowfin tuna and 3 skipjack. Two of the marlin were small stripers, only about 40 and 60 lbs each, which hit on caballito bait outside of the 130 Spot and were released. The other was a  200 lbs blue marlin, also released, also at the 130 Spot on caballito bait. The yellowfin were all of good size, with the smallest weighing about 10 lbs and the largest of 40 lbs. They also landed 3 skipjack on feathers at the 11:50 Spot.

Pisces 31′ Tracy Ann  caught 1 blue marlin this day, of approximately 200 lbs, which they released about 27 miles south of the Old Lighthouse, and hit on a purple lure. Anglers the Palmer family, also caught 7 yellowfin tuna of 10 to 20 lbs each. 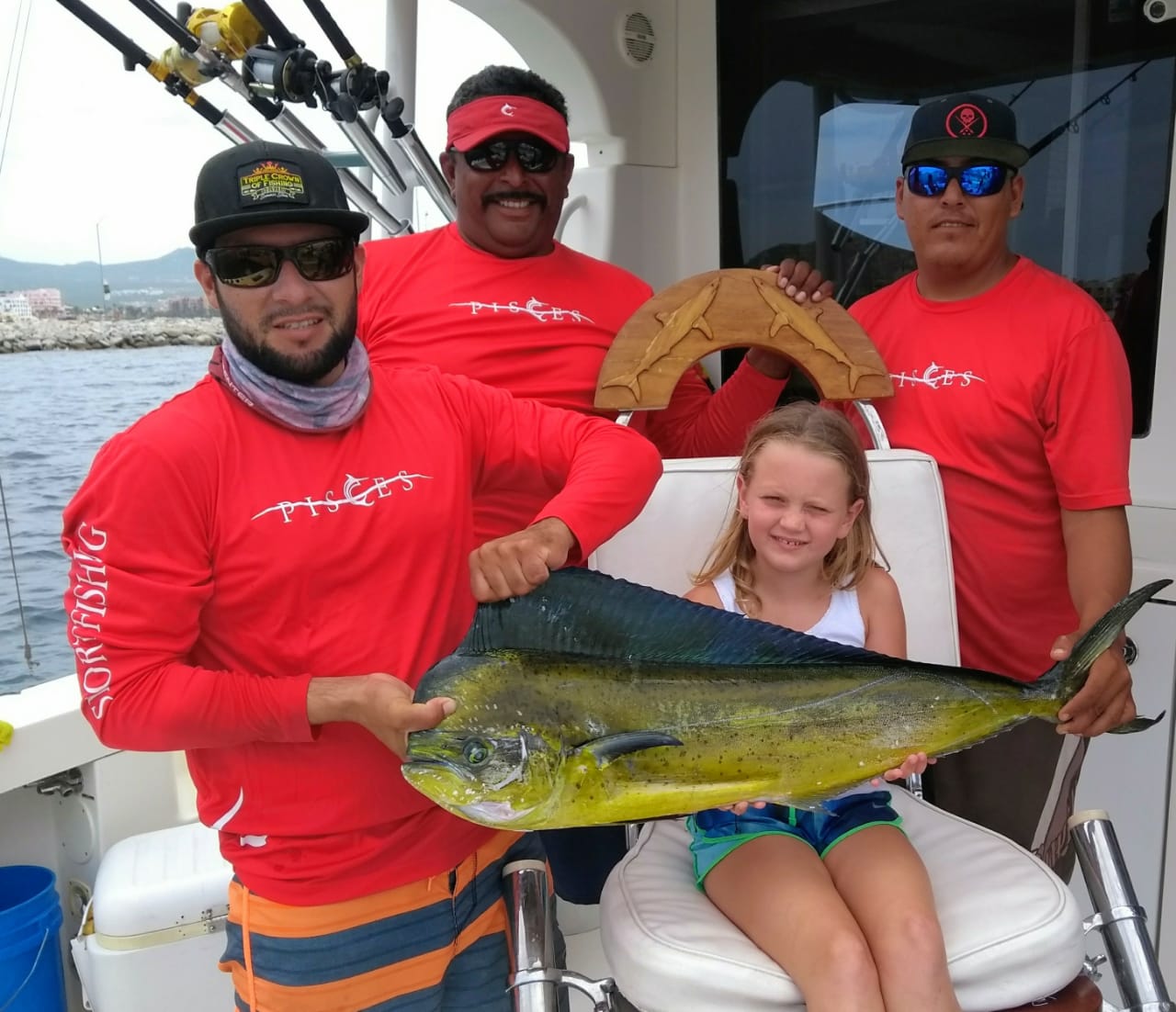 Pisces 55′ Flora T landed a nice striper this week, along with other great tuna catches and dorado later but, on this day specifically, the Puterman and Hendershot’s caught 1 striped marlin of approximately 180 lbs, a very nice sized fish, which they released. The malrin hit on a black and green lure. They also landed 12 yellowfin tuna of about 10 to 20 lbs out from the 11:50 Spot on cedar plugs.

Pisces 31′ Rebecca was one of our top performers this week. On July 15th, they caught 2 striped marlin on caballito bait, which they released, out at Punta Gorda. They also landed a 20 lbs dorado on a flying fish lure, with anglers Mark and Saul Farber doing a great job fighting the fish. Later in the week they caught 1 striped marlin of about 110 lbs which they released at San Jaime and 15 yellowfin tunas of about 10 and 15 lbs each, which hit on cedar plugs. Anglers were Chris, Mike and Stephen Reinke from Granberry, Texas. 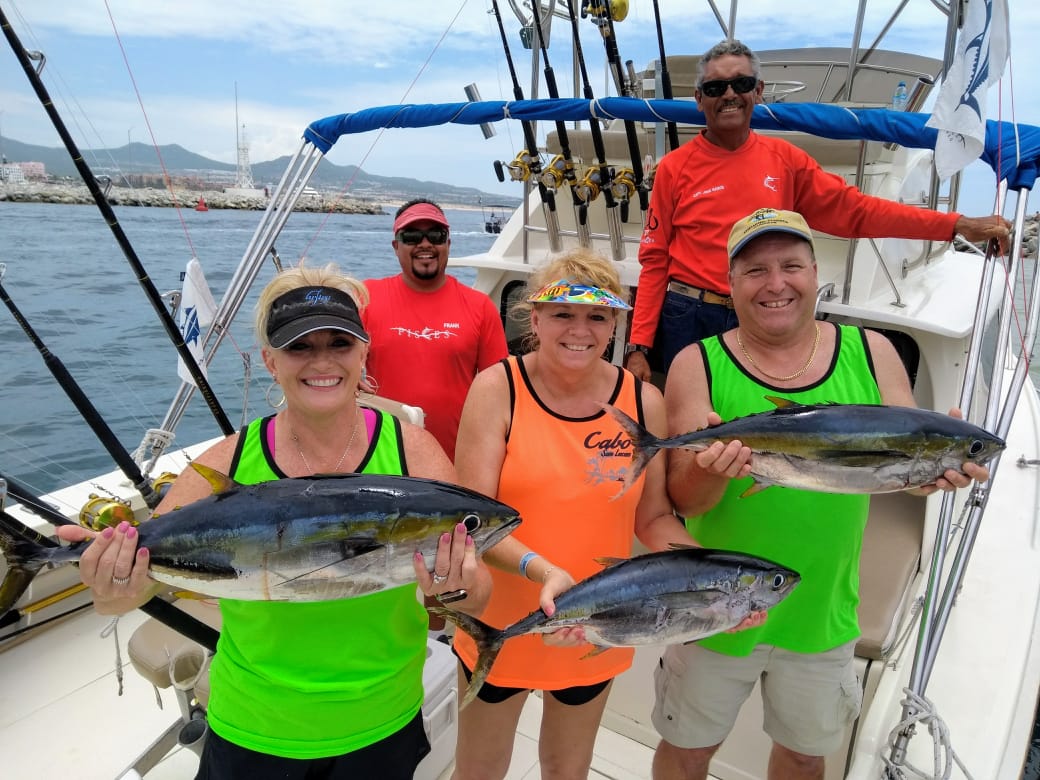 Yellowfin caught aboard the Rebecca

The biggest dorado this week was also caught yesterday aboard Pisces 31′ Rebecca. Anglers Dylan and Eric Winchell, a father son duo, landed two nice dorados, one of about 30 lbs and the other slightly larger, at about 35 lbs. The dorado hit on live caballito bait. They also caught 3 yellowfin tuna of about 10 lbs each on feathers and cedar plug lures. All fish were caught at San Jaime.