I apologize for making you wait an extra week for this latest fish report, especially since we have  had such good fishing! The hottest fishing of the week happened the weekend of the 28th – 29th;  I really could have written the report solely on Saturday’s and Sunday’s catches, which were SPECTACULAR. Just on these two days, Pisces boats caught 13 blue marlin, 2 sailfish, 5 striped marlin, 54 yellowfin tuna (one of which was 250 lbs!), 8 dorado, and 1 wahoo.  August 1st was also the start of this year’s Bisbees East Cape Tournament, in which a few Pisces boats participated. The winner of the tournament was Pisces 60′ Hatteras “Reel Machine”, under team name “Booze Brothers”, with owner Victor Johansen aboard. The winning fish, a black marlin of 538 lbs totaled $166,064 dollars in earnings. As for the smaller game fish, sought after closer to shore, we again had a great week, with LARGE roosters (the biggest this week was about 60 lbs), jack crevelle, and plenty of dorado there too. And even with hurricane John close by, which kept us from fishing two days this week, fishing catch rates have still been strong, with a slight lull in the next days after the storm. Things have started to pick up again starting this week though, with good catches this weekend. We are excited to see what next week brings, ’cause it’s feeling like it will be good one! 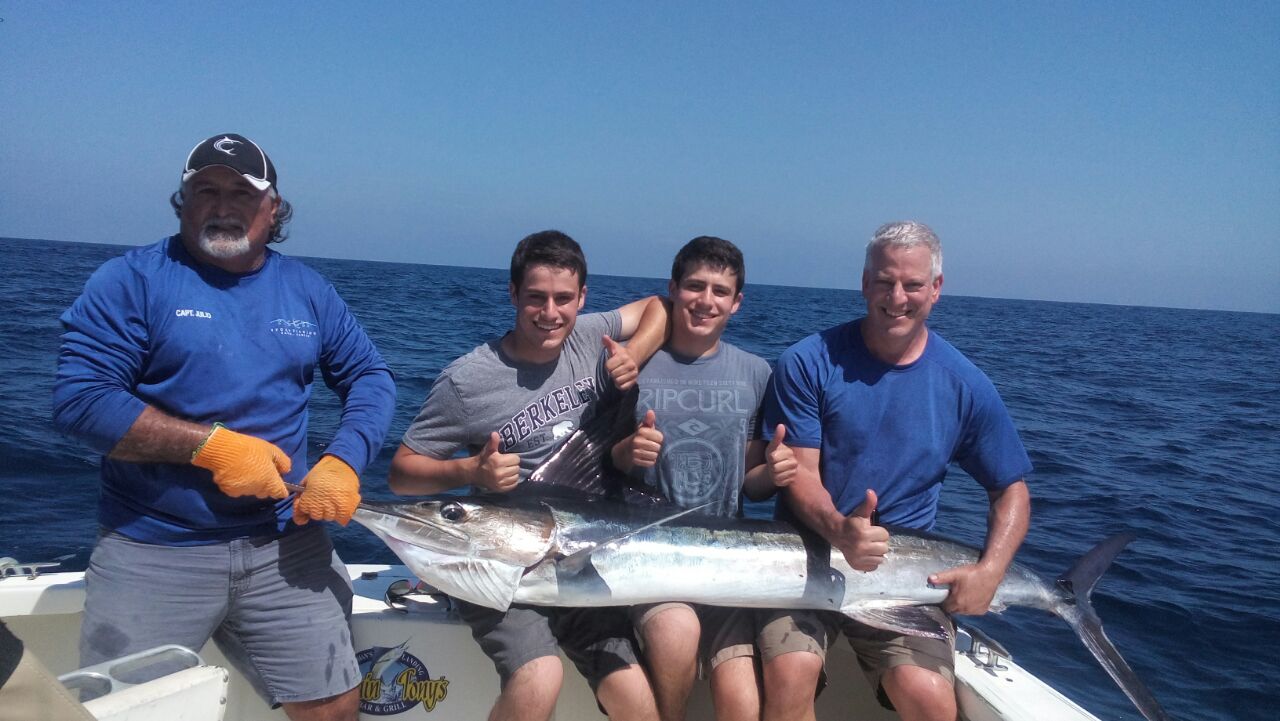 The top boat for blue marlin over this epic first weekend was Pisces 38′ Speedwell, with 3 blues all caught and released on Saturday 28th, by anglers Brad, Charles and Edwina Kincaid. All marlin were about 250 lbs and hit on petrolero and guacamayo lures out at the 11.50 Spot.

Pisces 31′ Tracy Ann did well with the striped marlin, with anglers Amy Casseri and Keith Casseri from Nashville catching and releasing 3 striped marlin ranging between 80 and 130 lbs in size. The fish hit on caballito bait and guacamayo lures about 30 miles out, at the 180 Spot. They spotted a nice blue marlin here as well, and managed to hook it on cabalito bait. The blue was about 230 lbs and was released.

More blue marlin for Pisces 42′ Hot Rod, with anglers from Southlake, Texas, catching and releasing two of them, about 230 to 300 lbs each. The fish hit on caballito bait our at the 95 Spot. 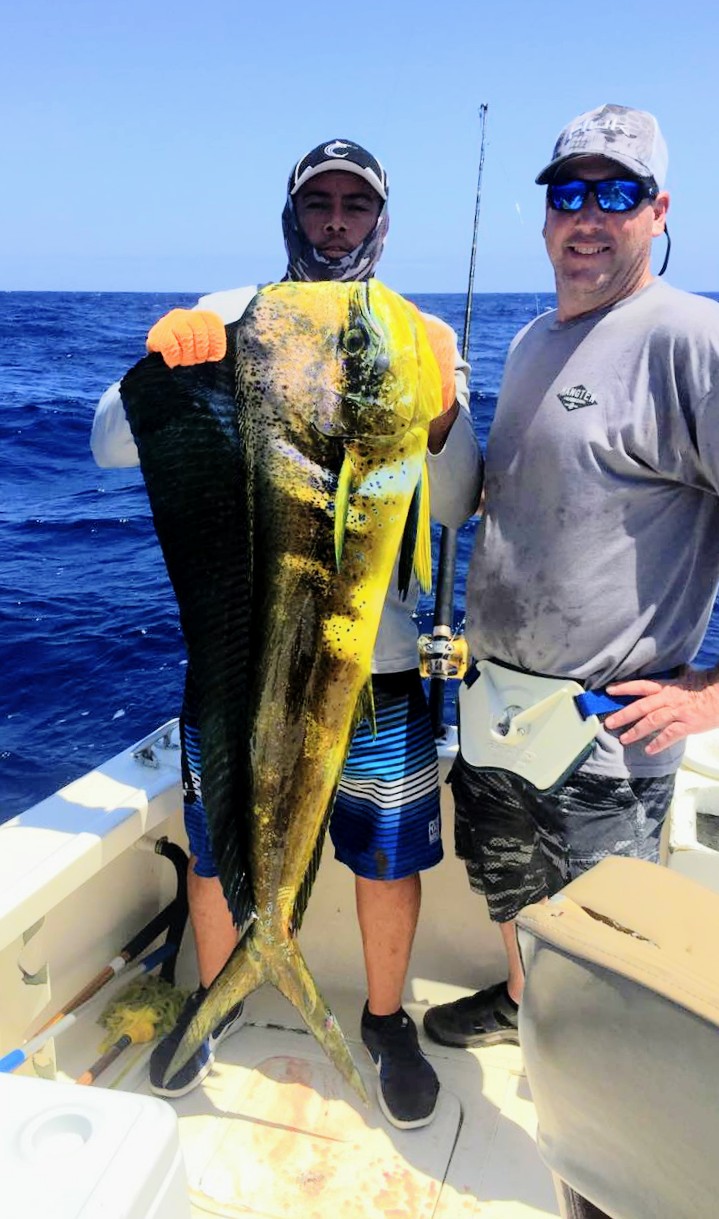 Pisces 31′ Ruthless has done very wellthis week as well. One of our top boats, with great dorado catches, the largest being of about 45 lbs, caught by anglers Heather Wells and Kevin Murray from California. The anglers also caught and released 2 striped marlin of about 140 lbs on caballito bait out from the Old Lighthouse. On July 31st, Ruthless had a great day for billfish, with 1 striped marlin of about 110 lbs released, which hit on a blue lure at the 11:50 Spot. They also caught a blue marlin of about 350 lbs on a yellow lure and a sailfish of about 80 lbs, which hit on caballito bait. Lastly they caught a yellowfin tuna of about 15 lbs which they kept. All billfish were released. Anglers were Angie Cervantes, and Larry and Rex Myrick. 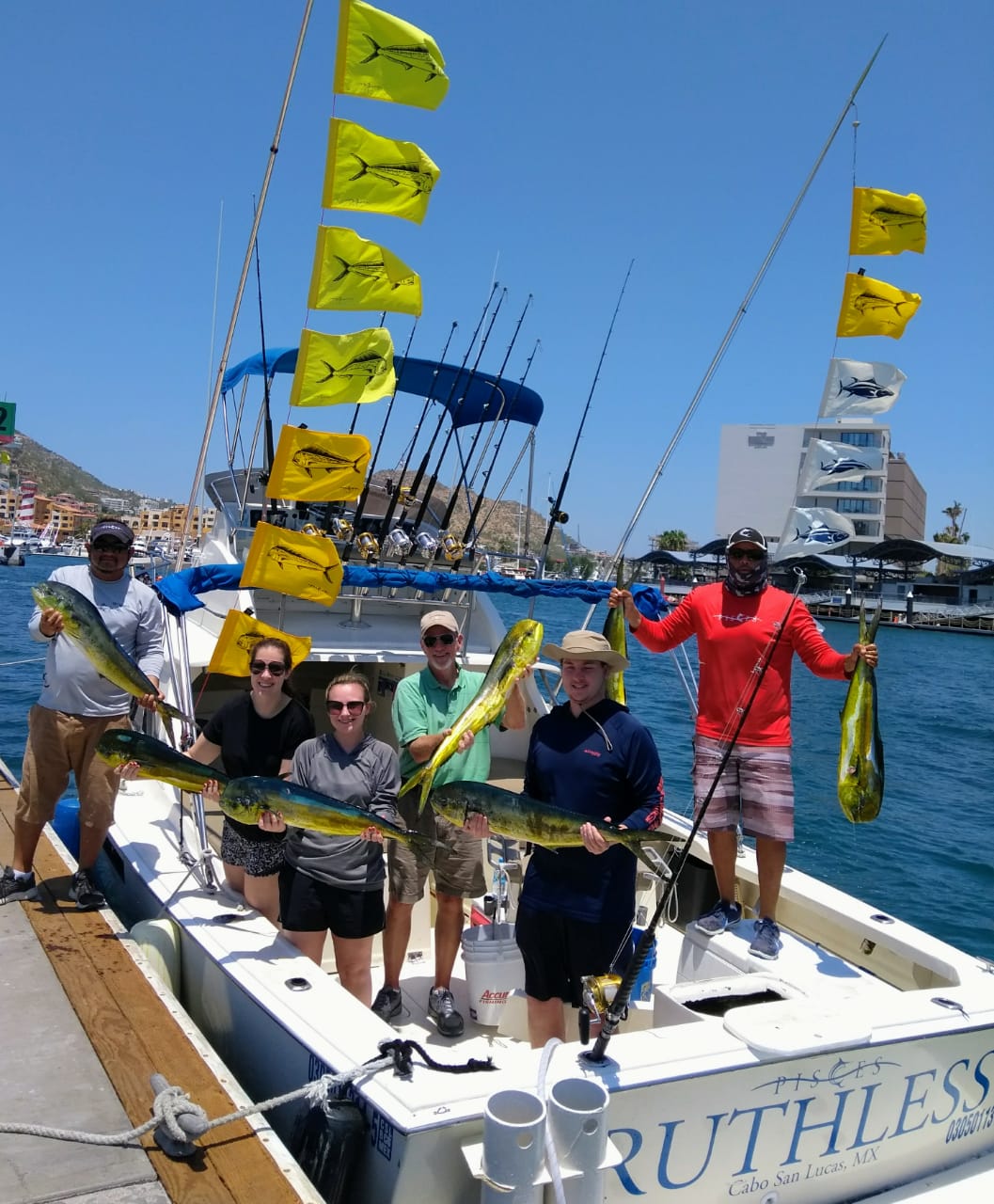 Crew and anglers aboard Ruthless show off their catch

Pisces 38′ C Rod had some nice dorado as well, the largest being about 30 lbs, along with two others, caught on petrolero lure and caballito bait out at the 95 Spot. They also landed 1 blue marlin of about 200 lbs on a pink/blue lure. 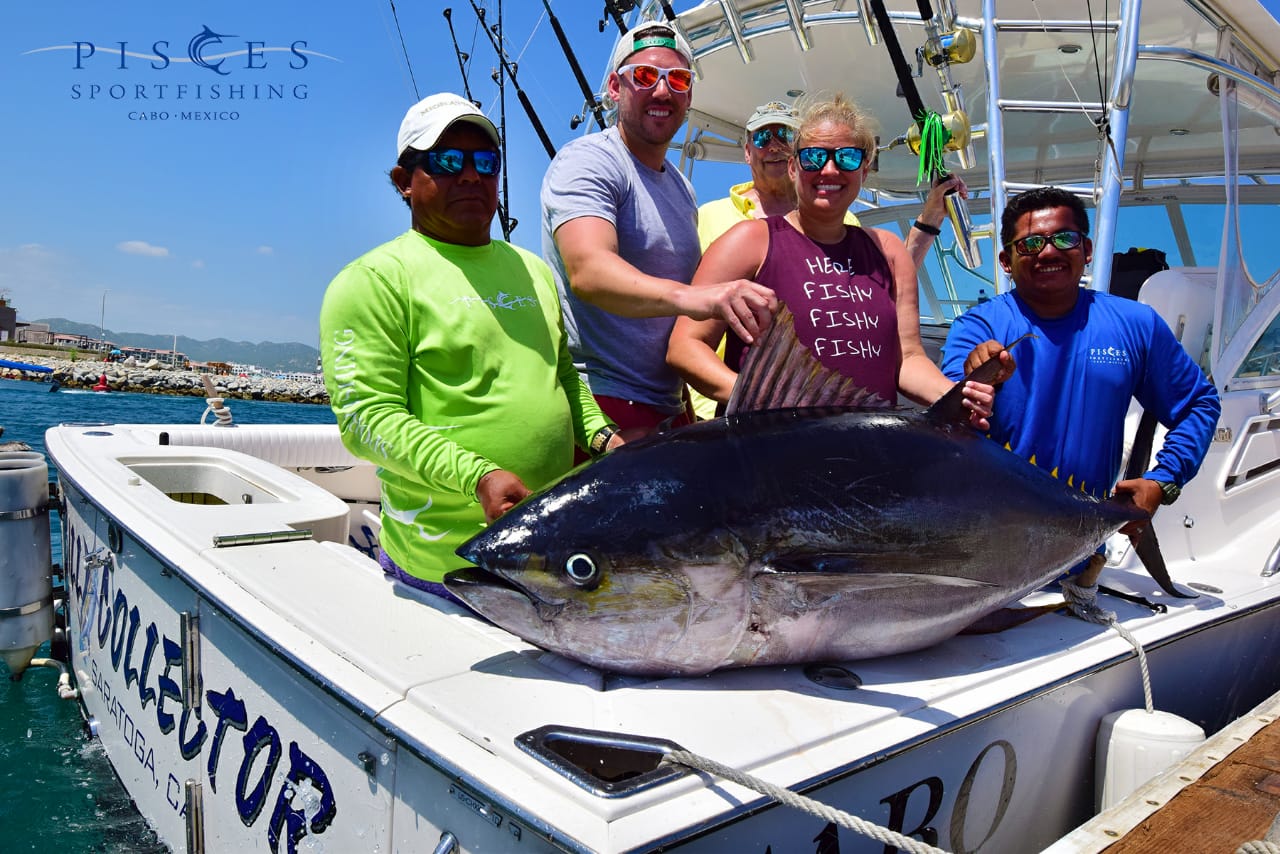 Pisces 32′ Bill Collector hit the dock on Sunday the 29th with a massive 250 lbs yellowfin tuna which angler Lauren Hodges reeled in. They landed the monster fish about 20 miles out at the 120 spot on a flying fish lure. The anglers aboard were Ralph Yanik and Ryan Hodges, from South Carolina.

Also noteworthy, were two large wahoo caught on consecutive days by Pisces 31′ Cabolero. The first, on August 2nd, was a 35 lbs wahoo which hit on ballyhoo bait about 2 or 3 miles off of the Lighthouse and the other was an approximate 50 lbs wahoo caught 7 miles off of the Lighthouse the next day.This time it hit on a guacamayo lure, and was enjoyed by anglers Alex, Vito and Zachary Badalamenti from Idaho.

And speaking of wahoo, the Pisces 61′ Viking, Pour Decisions closed this week with an impressive day of fishing on August 10th,  which included an almost 60 lbs wahoo, 8 out of 9 striped marlin caught and released, 1 sailfish and 1 mako shark. They ran up to the Finger Banks, 50 miles up the coast, to find fish (as it has slowed quite a bit after the storm now). All fish, except for the wahoo were released and hit on dead mackerel bait. 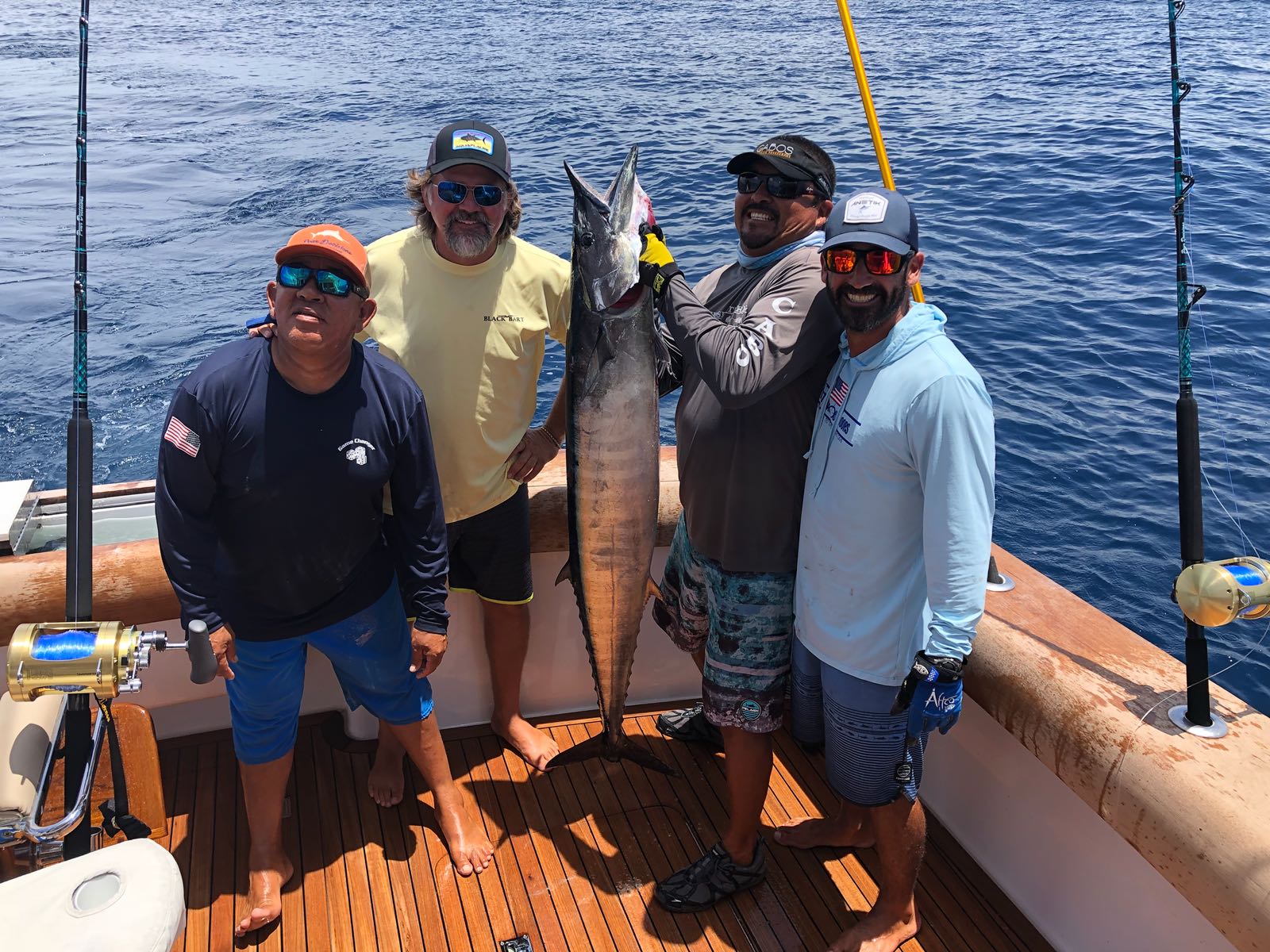 For “smaller” game catches this week, fishing was great! Most notable catch was by Pisces Panga Samantha, with anglers Brad and Sara Isola from Texas catching and releasing two large rooster fish of about 55 and 60 lbs each! They caught these on the Pacific side, past the Old Lighthouse on caballito bait. Pisces Panga Poseidon  also caught 1 roosterfish, of about 30 lbs, close to the Old Lighthouse on caballito bait and 1 jack crevelle of about 18 lbs, from longtime Pisces anglers from England, Ben and William Smith; a great father son duo who had many other notable catches this week as well! Again, Poseidon did well later in the week with 6 dorado of about 10 lbs each by angler Scott Seiler out from the Lighthouse. Pisces Panga Anamar topped this by adding one roosterfish to their catch this day, making it 6 dorado and 1 roosterfish of about 35 lbs, released, at Pozo Cota. The fish all hit on feather lures. 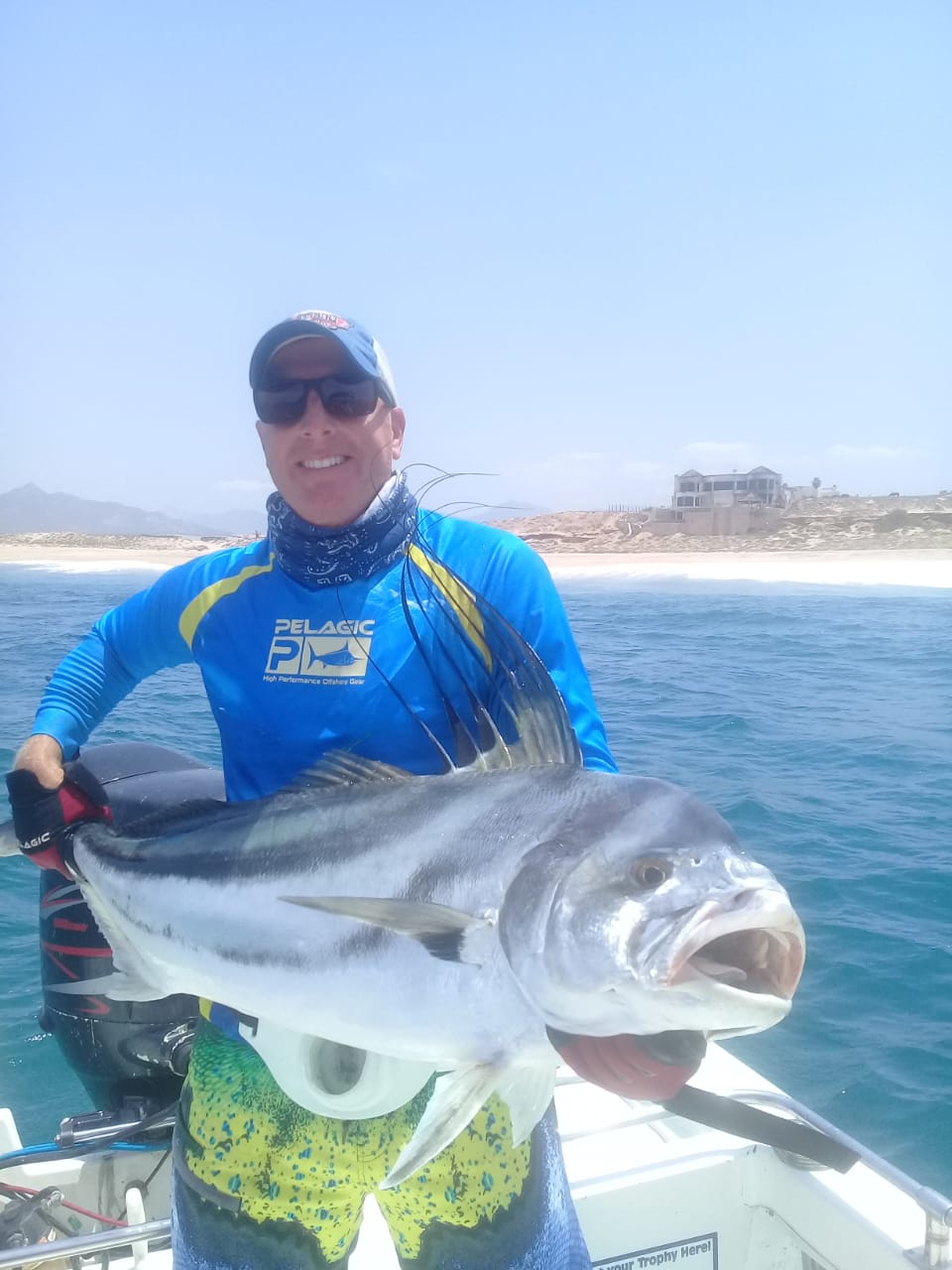 Roosterfish caught and released aboard one of Pisces Pangas

WEATHER CONDITIONS: Some choppy water and wind, leading up to the storm, other days calm.