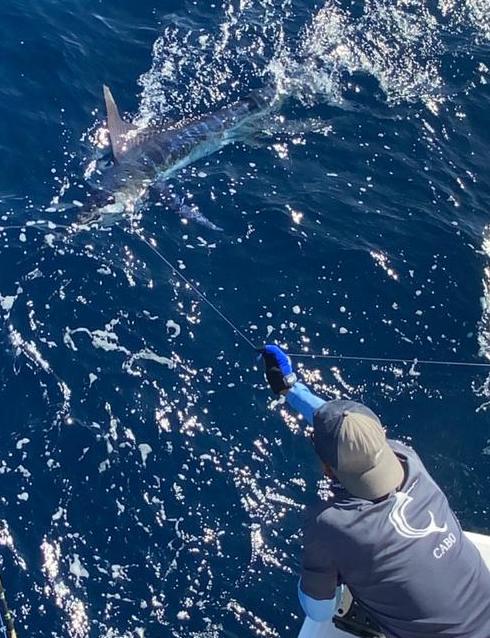 Good fishing with things picking way up into the weekend. Success rate for boats dropped only a few percentage points compared to last week, as fish were harder to find or were “pickier” eaters. We were also short one fishing day again this week, as Port Captain closed Port due to a far off storm, which didn’t bring any weather affectations, except for some swell. Boats found schools of porpoise but the tuna were hard to land. Still, 30% of boats caught tuna, with a few fish on the bigger size, ranging from 50 to 80 lbs each, and a few captains reporting to have “lost a few big ones” (100 lbs or larger). Boats targeting Billfish averaged from 1 to 3 or even 4 Striped Marlin each, with a total of 44 Marlin released, but fish were found in different areas daily, making the guys work hard to land them. Still, if you found the right spot at the right time, it was ON. Pisces 32′ Bill Collector did just this and was our top Billfish boat releasing 10 Striped Marlin in one day, along with 1 Shark Release and a Yellowfin Tuna! Pisces 30′ Karina also did this the day prior, going 3 for 4 on Striped Marlin and taking 1 Dorado of about 25 lbs plus 10 Yellowfin. We also had some nice Roosterfish, with Pisces 31′ Ruthless releasing 4 in one day. A few Grouper, Yellowtail and even a Spearfish to wrap it up. 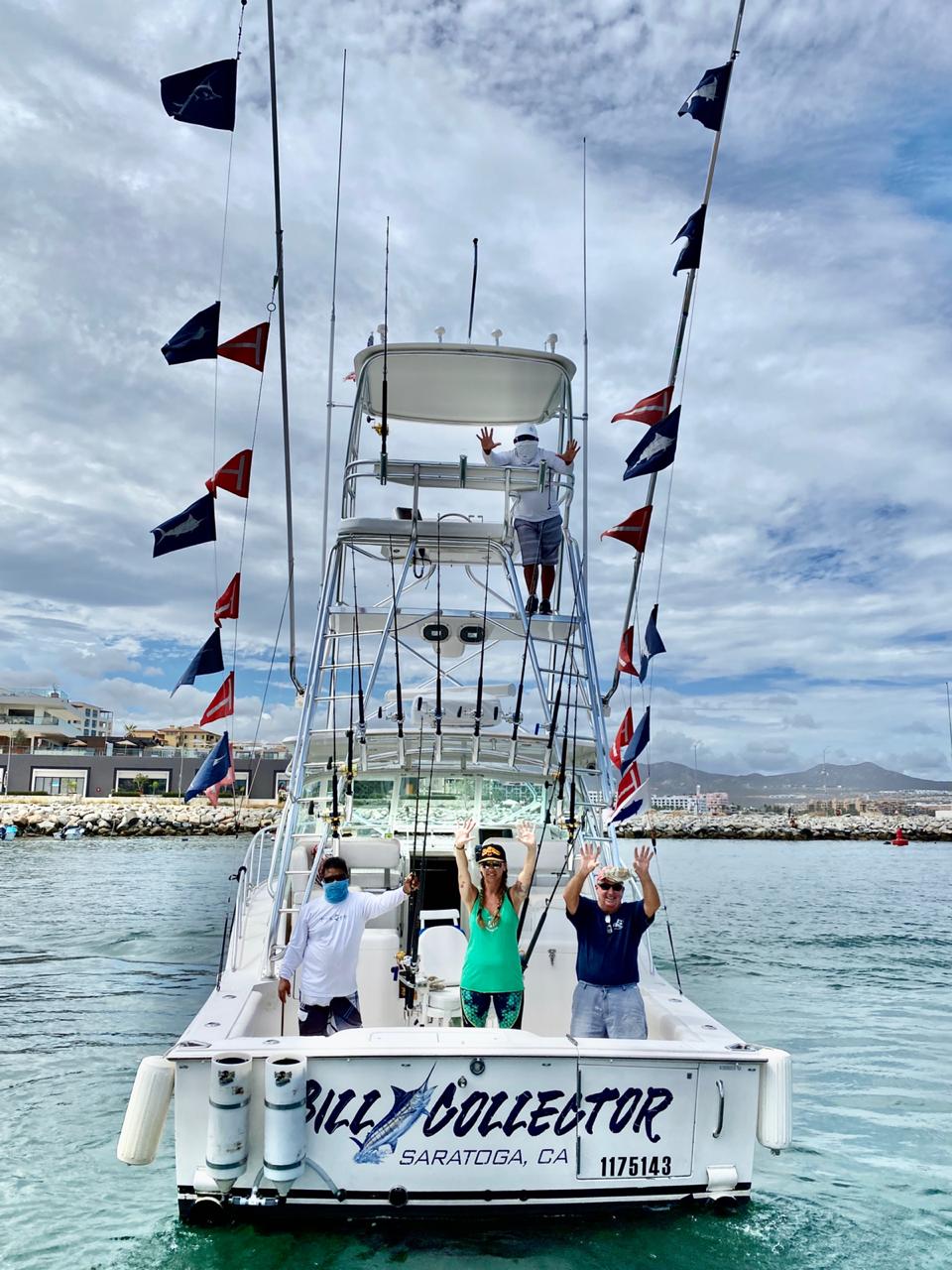 Top anglers this week were John Williams and Heather Paulsen, releasing 13 Marlin Total with Pisces! Aboard Pisces 31′ Tracy Ann they released three plus a Jack Crevalle and then found the honeyhole later in the week with Pisces 32′ Bill Collector releasing 10 in one day! They also released a Shark and didn’t stop until they found a Tuna for dinner. Marlin were between 100 and 140 lbs each and tuna was about 20 lbs. 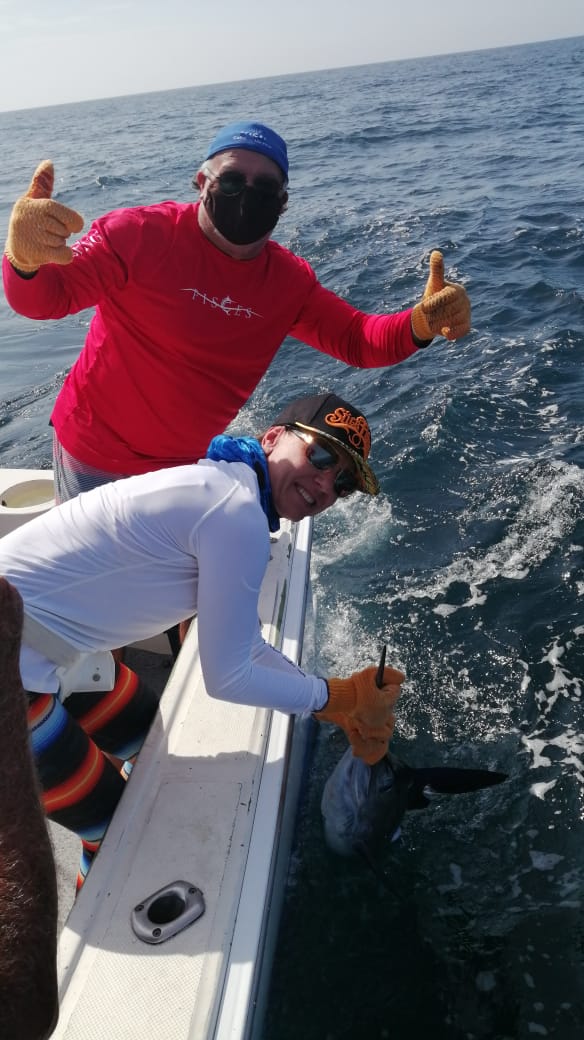 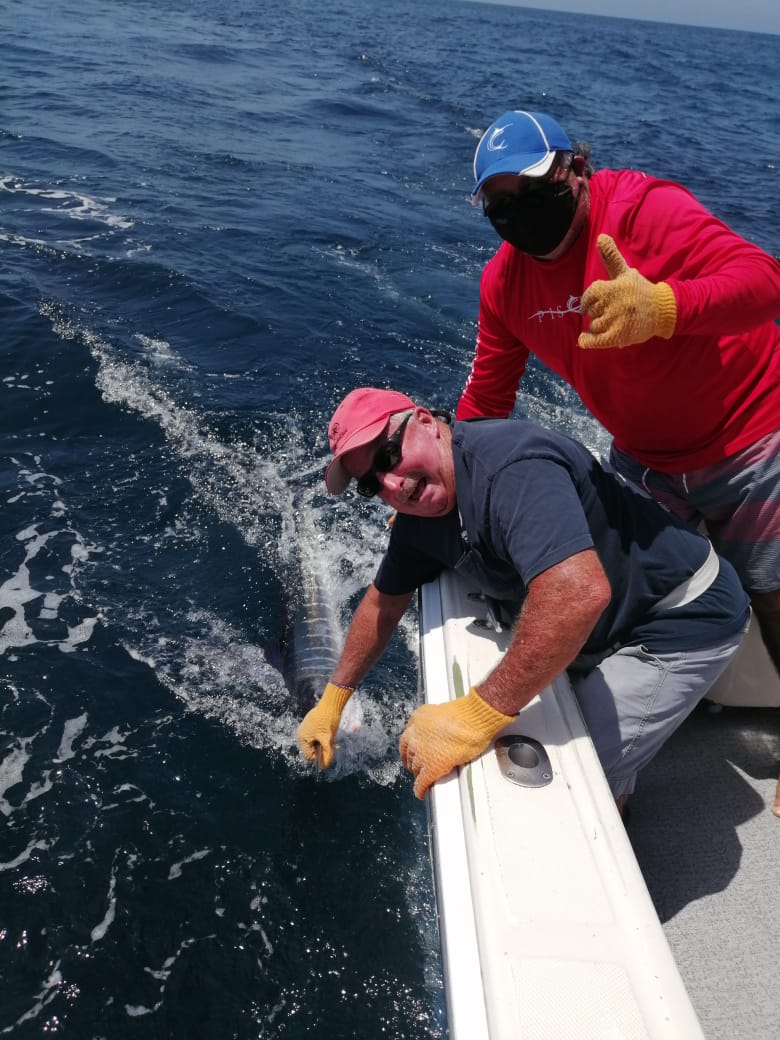 Angler TJ Jaworsky also had a great few days on Pisces 30′ Karina, with 5 Striped Marlin total and 12 Yellowfin.  He also caught the biggest Dorado of the week on his best day Releasing 3 Marlin and keeping 10 Tuna too. Tunas were between 10 to 25 lbs, Dorado about 25 lbs and Marlin were around 120 lbs each. Fish hit on dead and live bait, Tunas on cedar plugs and feathers. 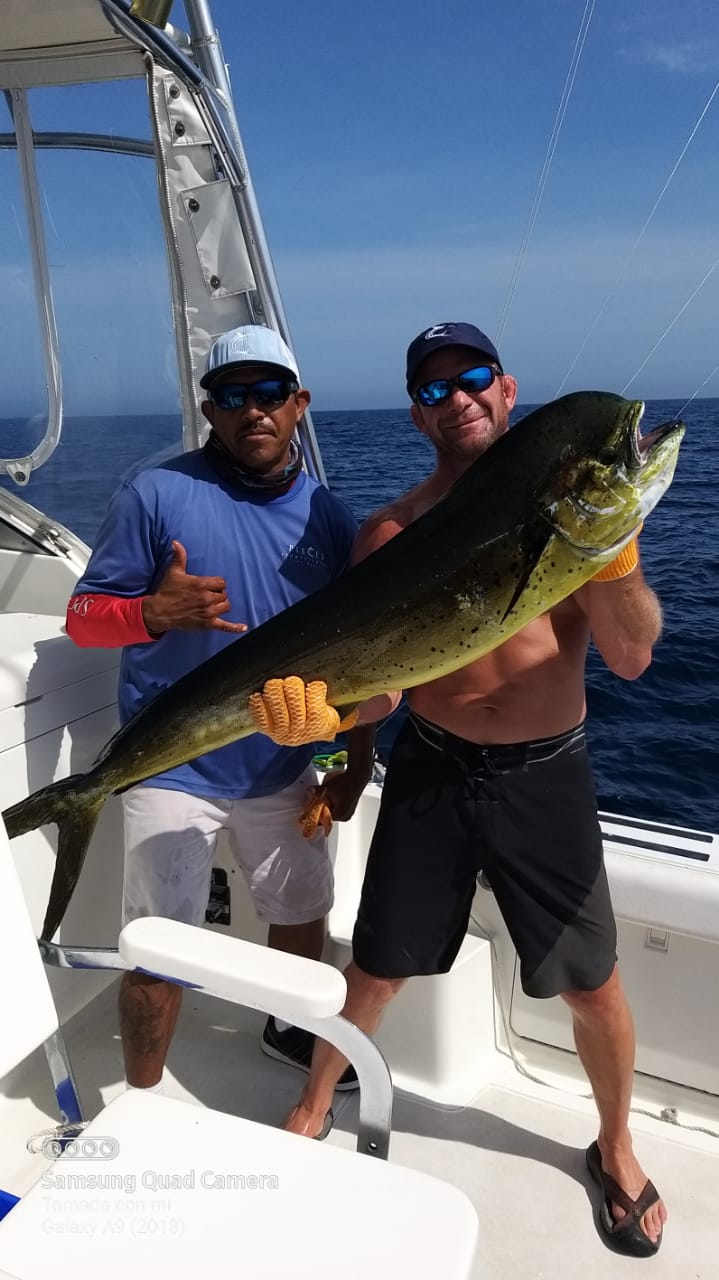 Pisces 35′ Valerie found Dorado and Marlin for the Sargent and Brooks families from Texas, who fished with their children. They went 3 for 5 on Striped Marlin and kept a 20 lbs Dorado that hit on dead bait. Marlin averaged 120 lbs. 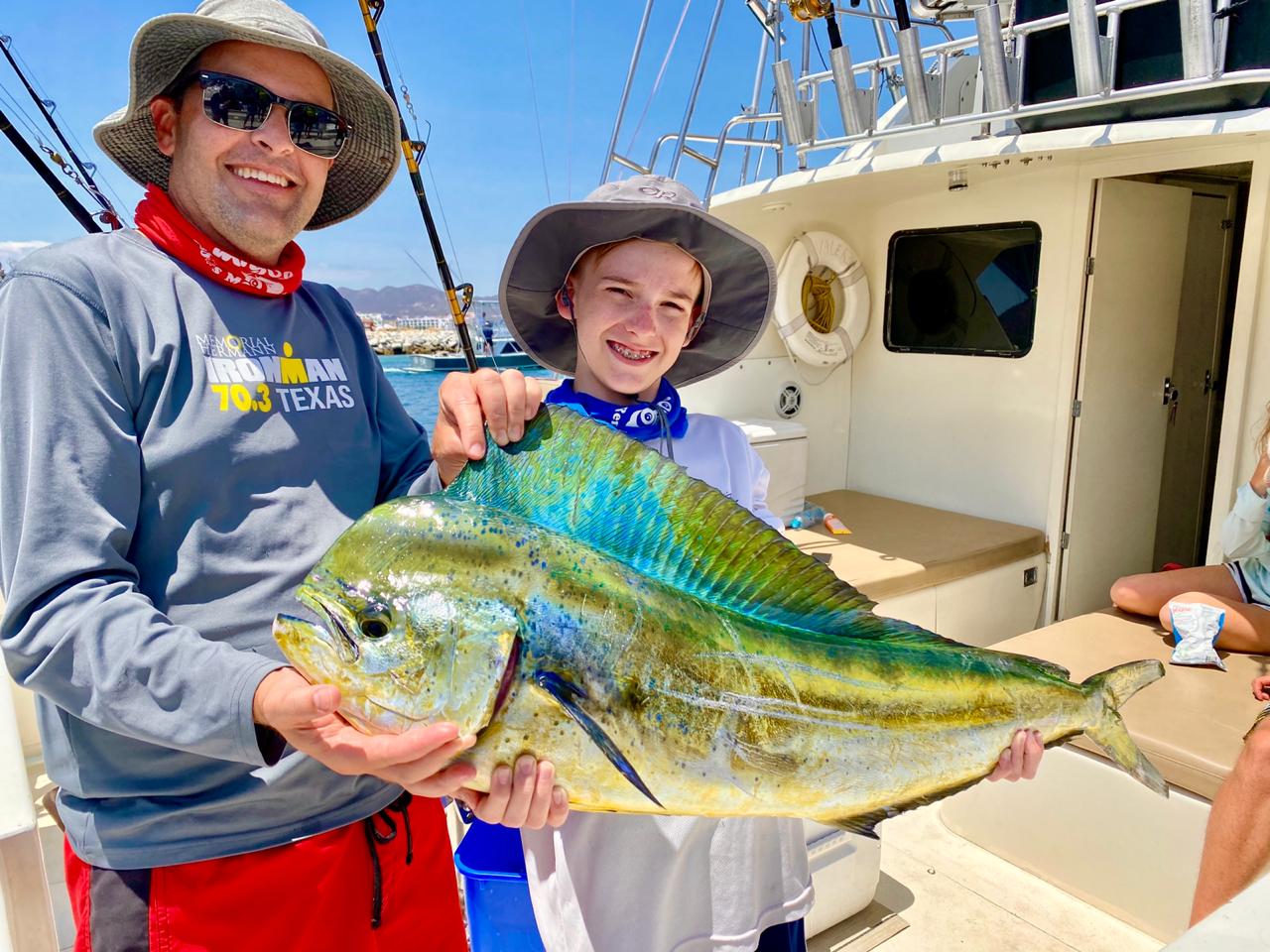 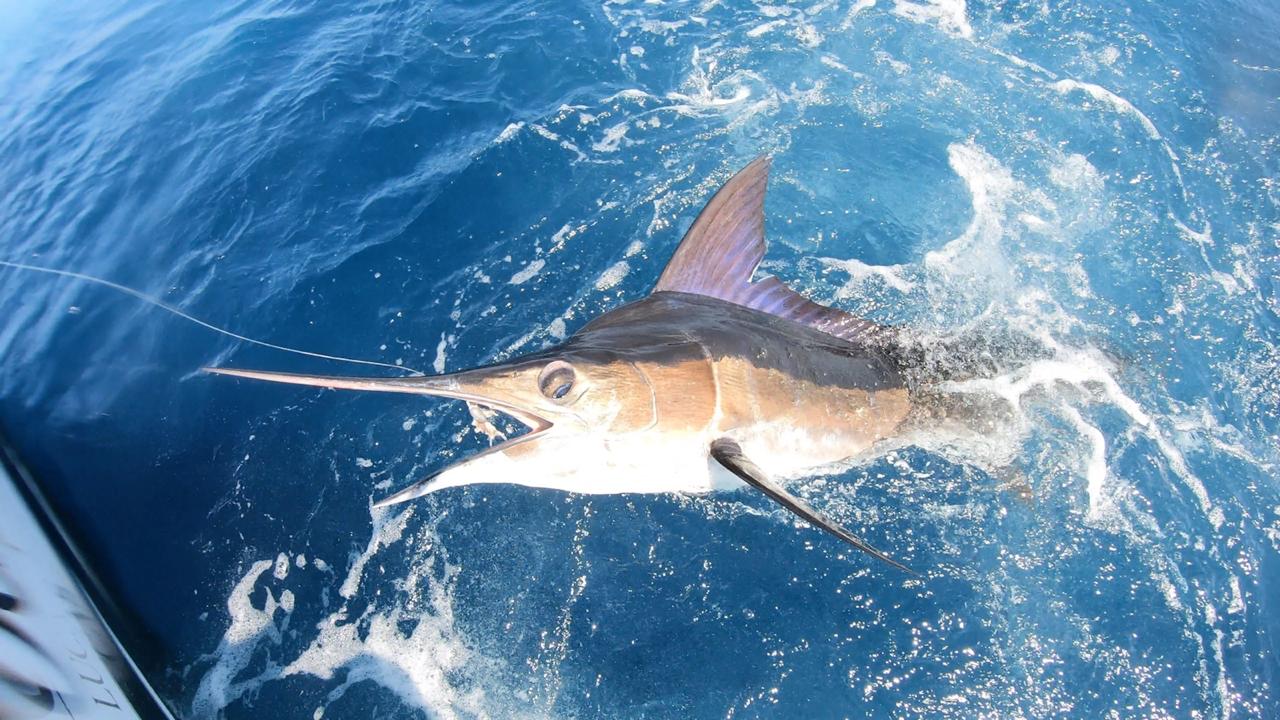 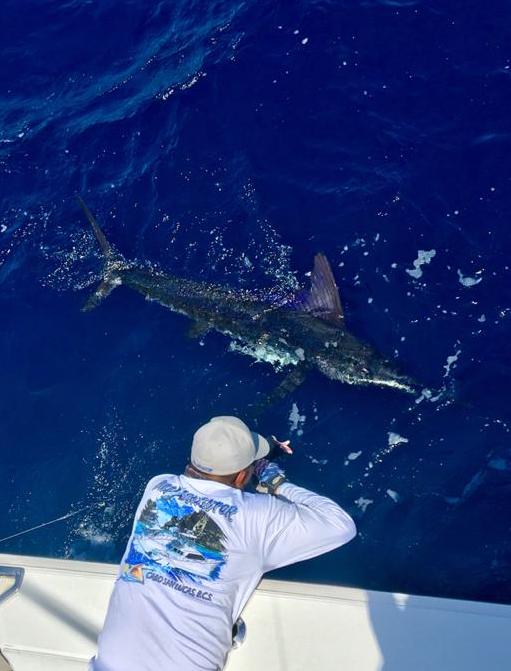 Boats out yesterday were Pisces 31′ Rebecca which went 4 for 4 on Striped Marlin released for father and son anglers Bryan and Jack Turner & Mark and Sam Assaad. They worked the porpoise schools hoping to land their tuna but couldn’t land ’em. Pisces 35′ Bill Collector 2 went 4 for 5 on Striped Marlin as well, using live caballito and ballyhoo for bait, close to La Herradura. Pisces 42′ Hot Rod with anglers Chris and Theressa Stehr and Judd Nystrom and Melinda Hall did well to release 3 Striped Marlin and land some tuna, 3 total of about 15 lbs each. 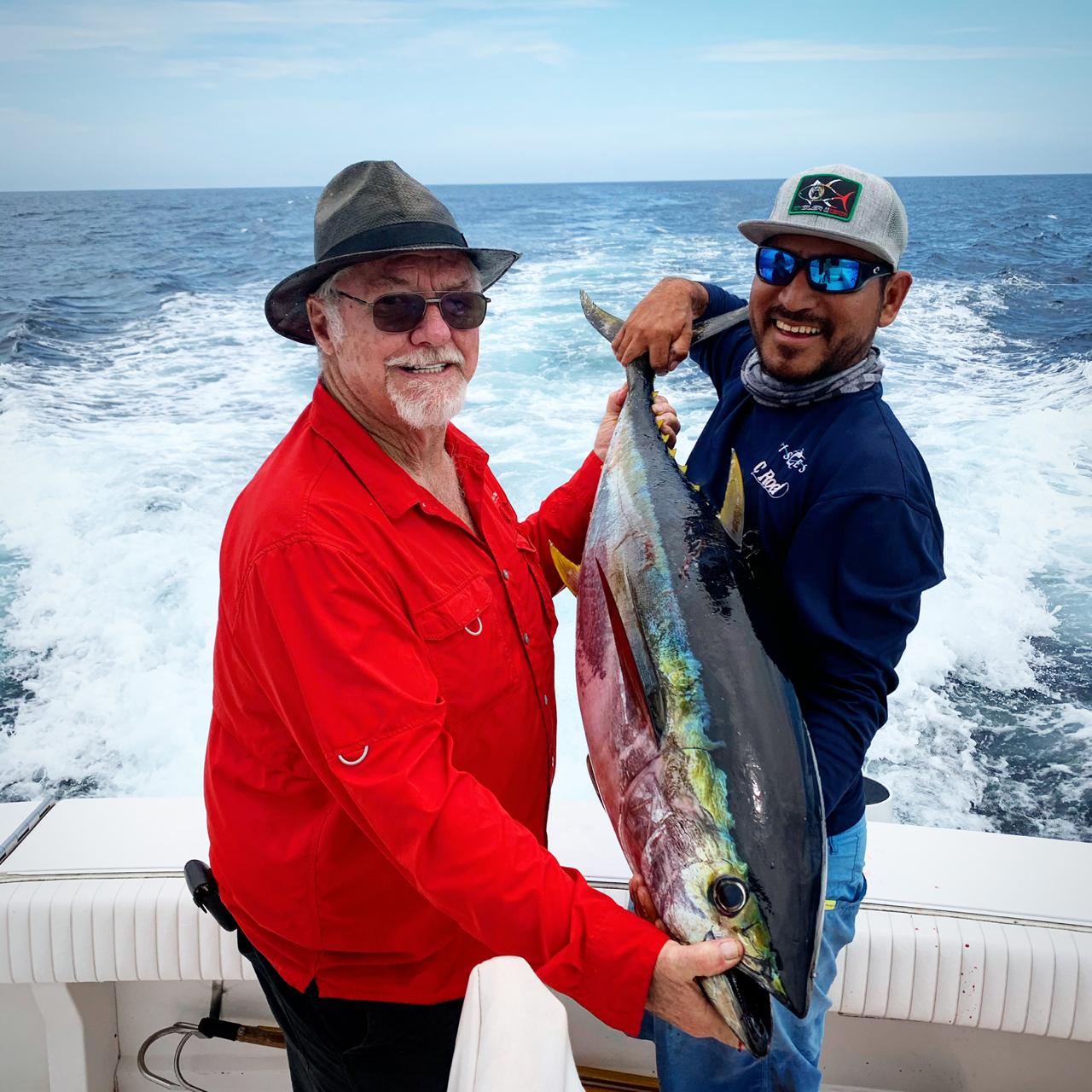 Similarly Pisces 38′ C Rod went 1 for 2 on Striped Marlin and also landed 2 Yellowfin of about 20 lbs, 30 miles south from the Old Lighthouse. Mate Martin reported having two big tuna that didn’t stick, hitting the yummy flyer on kite. And our new vessel to the fleet, Pisces 37′ Reel Cast  (which is now available for charter!) found 2 Striped Marlin, released, and landed 6 Yellowfin Tuna between 30 and 50 lbs each. Anglers onboard Zach Morrow and Shane Leach reported to have, “Lost 10 others on the kite, some up to 100 pounds”. 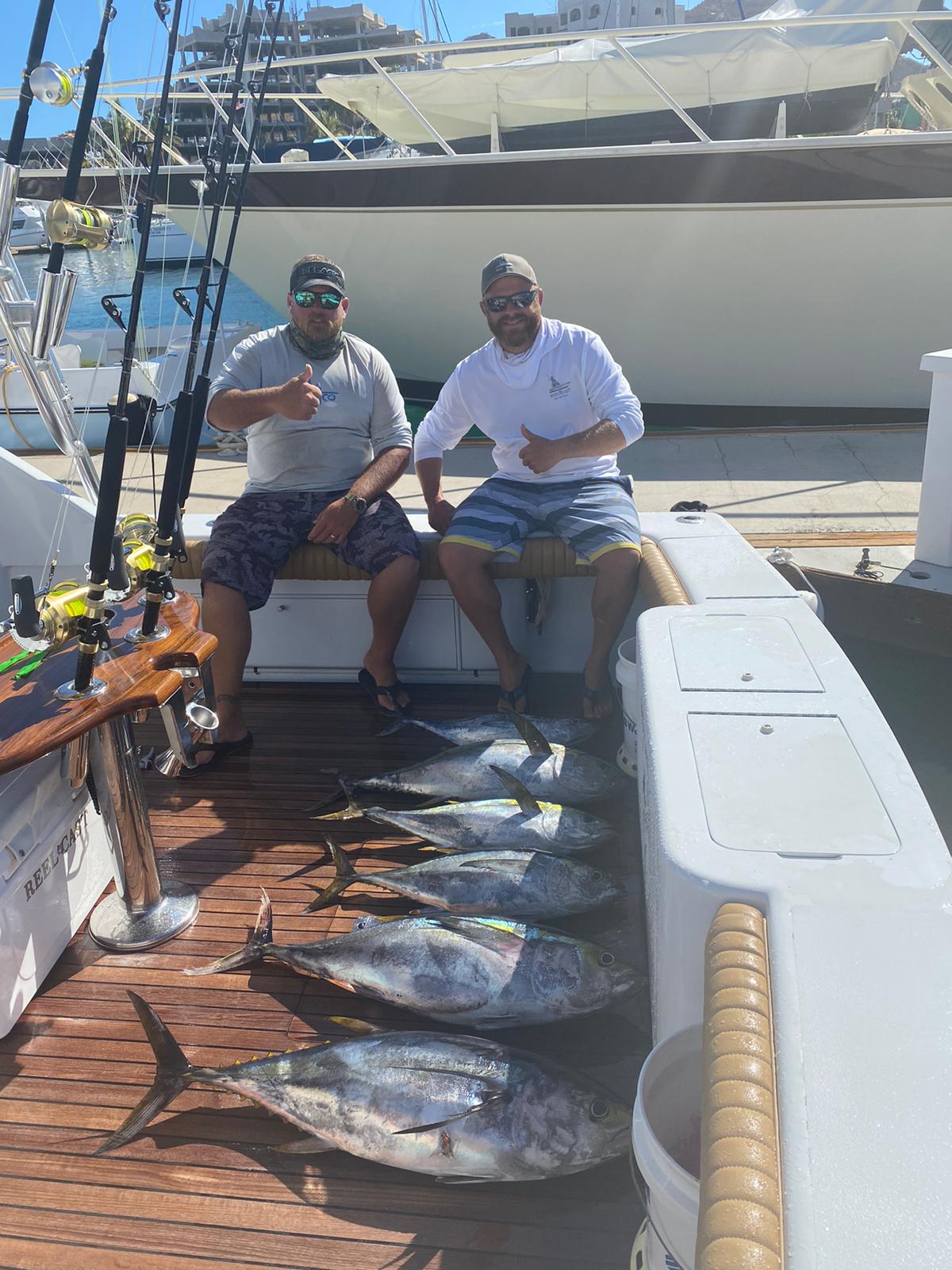 More tuna for Captain Tito Oloascoaga of Pisces 35′ Knot Workin’, with 5 Yellowfin ranging in size from 30 to 50 to the 80 pounder shown here. All fish were caught on cedar plugs and feathers close to the 220 Spot. 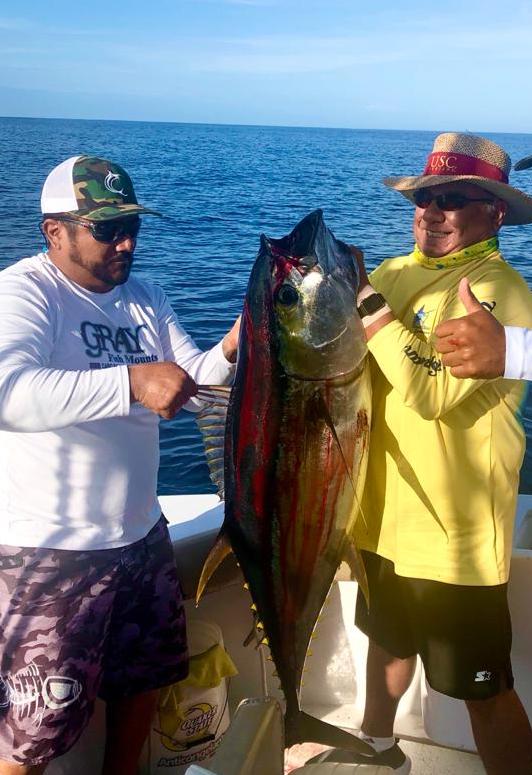 In our “Other” Category we had Pisces 31′ Ruthless release 4 Roosterfish ranging from 10 to 25 lbs, all on lisas, close to El Tule. Pisces 38′ Speedwell also released roosterfish this week, one of about 25 lbs on lisas as well. Pisces 61′ Pour Decisions fished a few hours and released a 70 lbs Spearfish, a prized catch in these waters. 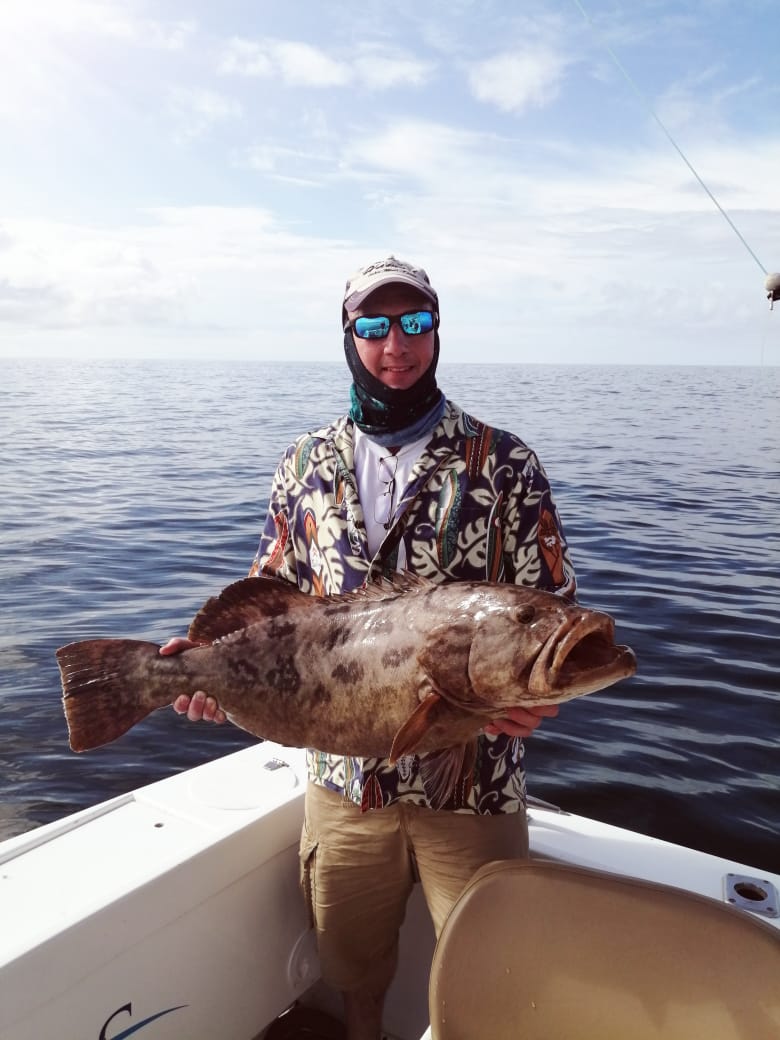 In our “Other” Category we had Pisces 31′ Ruthless release 4 Roosterfish ranging from 10 to 25 lbs, all on lisas, close to El Tule. Pisces 38′ Speedwell also released roosterfish this week, one of about 25 lbs on lisas as well. Pisces 61′ Pour Decisions fished a few hours and released a 70 lbs Spearfish, a prized catch in these waters. Pisces 28′ Andrea found a nice grouper of approximately 25 lbs for angler Harman Moen on a half day. 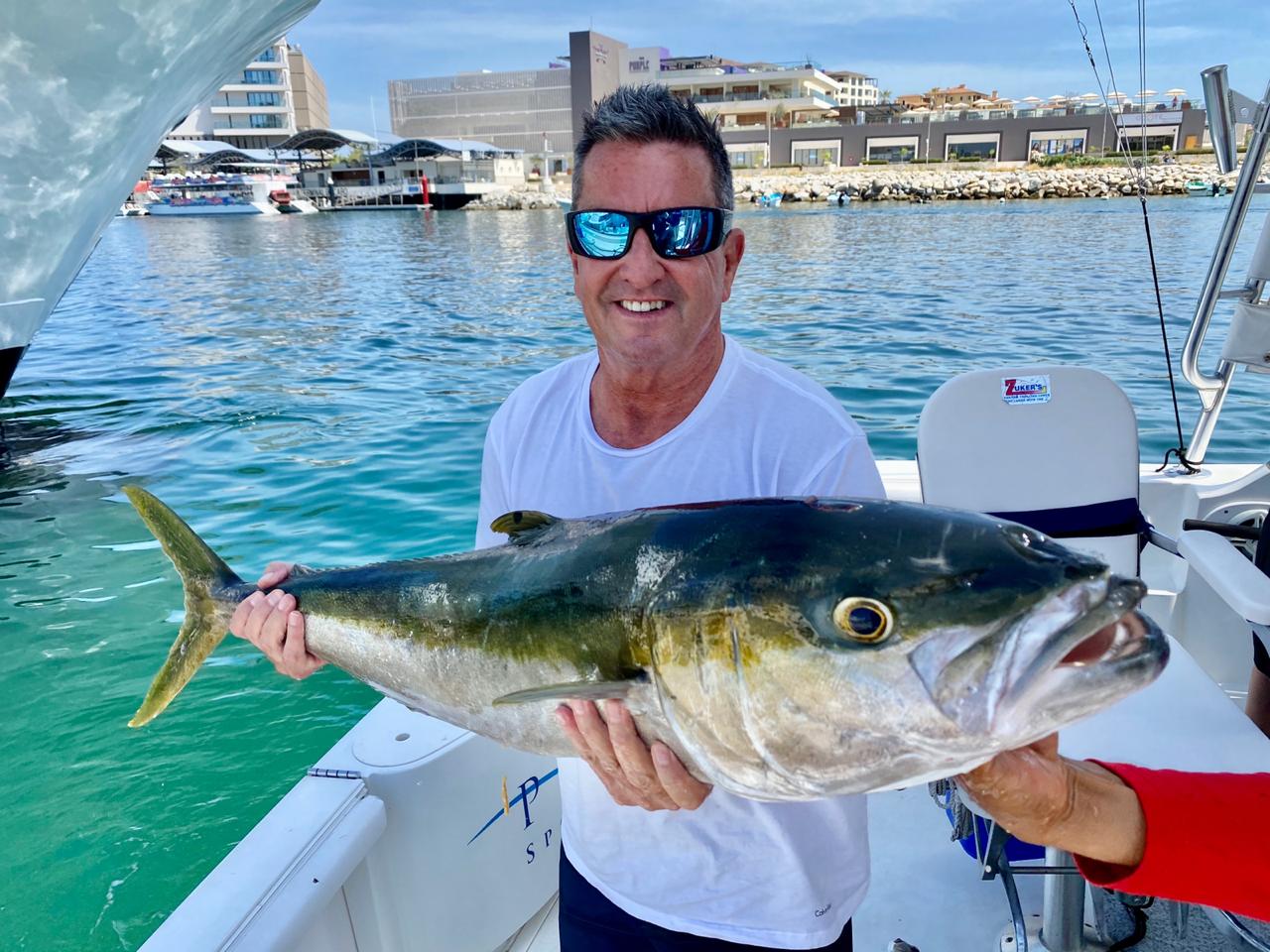 And last but not least Pisces 30′ Karina did well to find a decent Yellowtail of about 30 lbs for anglers Mark Mazza and Justin Walke, plus 1 Grouper, 1 Bonita and a few other bottom fish. All fish landed out of Migrino, jigging.

WEATHER CONDITIONS: Some swell around 3 to 4 ft, Partially cloudy days with some humidity and hot weather.