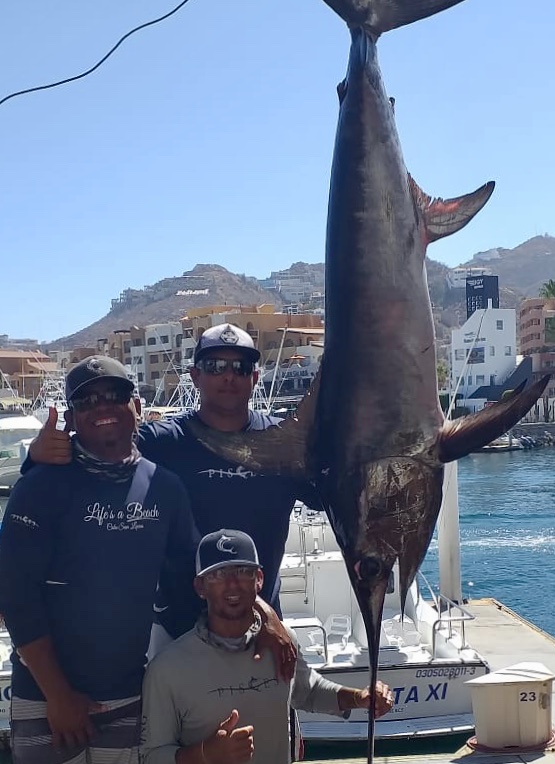 Changing weather, again this week, made for some challenging fishing as water temperatures varied and fish didn’t stay long in the same areas. We had two days of strange thick fog that rolled deep into town and a bit of wind on some days. This would happen and then the next day, turn up the heat, then back up to fog and cooler water. Still though, we had good marlin numbers, 85 released total for 40 boats. Dorado and Tuna were scarce, only a couple caught, but the inshore fishing held up. BIG rooster fish again this week, and lots of them, plus some yellowtail, sierra, bonita, snapper and some triggerfish. To close out the week, a surprising catch this Saturday, with Pisces 31′ La Brisa hitting the docks with a swordfish, found on the surface close to shore and caught on 40 lbs test.

Pisces 31′ La Brisa had already released a striped marlin yesterday, close to Punta Ballena area and the anglers, Adam Strout, David French, Jacob Morris and Pat French from Maryland were having a good day. But it got better. The crew spotted something on the surface – swordfish. Swimming only about a mile offshore the crew threw some live caballito bait and got it to bite. It was going to be tough fight as they cast the bait on a Shimano 20 with 40 pound test line, 100 lbs leader. Angler Adam Stroud fought the swordfish for two and a half hours before getting it to the boat. A day to remember for the angler and the crew aboard; Captain at helm this day was Fernando Noyola (usually deckhand on La Brisa). 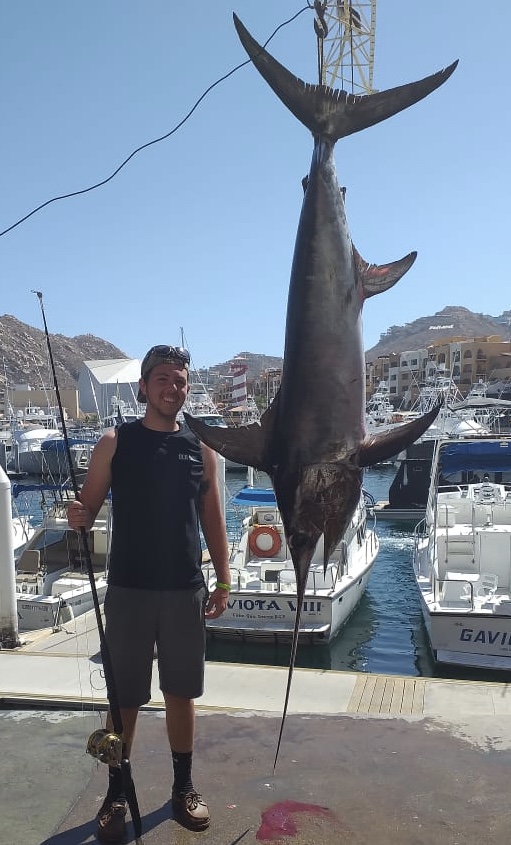 Pisces 35′ Bill Collector 2 had another stand-out week with good marlin catches. They released 4 Striped marlin of about 100 – 120 lbs each out at Destiladers on ballyhoo and dead caballito bait. Anglers were the Vitols family from AZ. The next day they headed to Destiladeras again this time releasing 3 striped marlin, using the same tactics. Their most fruitful day came at the beginning of the week when they released 2 Striped marlin, which took ballyhoo and live caballito and also kept an amberjack which hit on the yoyo. Plus, one bonita and 6 red snapper using dead bait, all at Destiladeras once again.

Pisces 31′ Rebecca did well at Destiladeras too with 3 Striped Marlin released on live bait. The next day, they released 4 Striped Marlin between 100 and 130 lbs each on live and dead bait, at Punta Gorda with anglers the Moczygemba, Stolle and Wiatrek families. 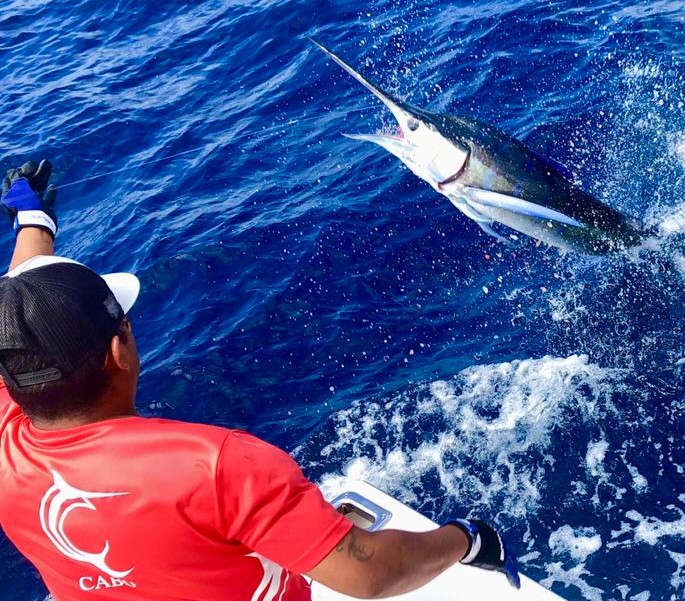 Long time fishing family the Dow’s from Greenbrae, CA, returned this year for their annual trip with us aboard Pisces 35′ Valerie, making her our most successful boat this week with 12 marlin released total (9 marlin released by the Dow’s). on their best marlin day they released 4 Stripeys on live caballito bait out of Destiladeras, with fish ranging from 100 to 130 lbs each. All of their marlin caught this week were found between Destialderas and Punta Gorda area. They headed inshore around Cabo Real area and did well with grouper, triggerfish as well. 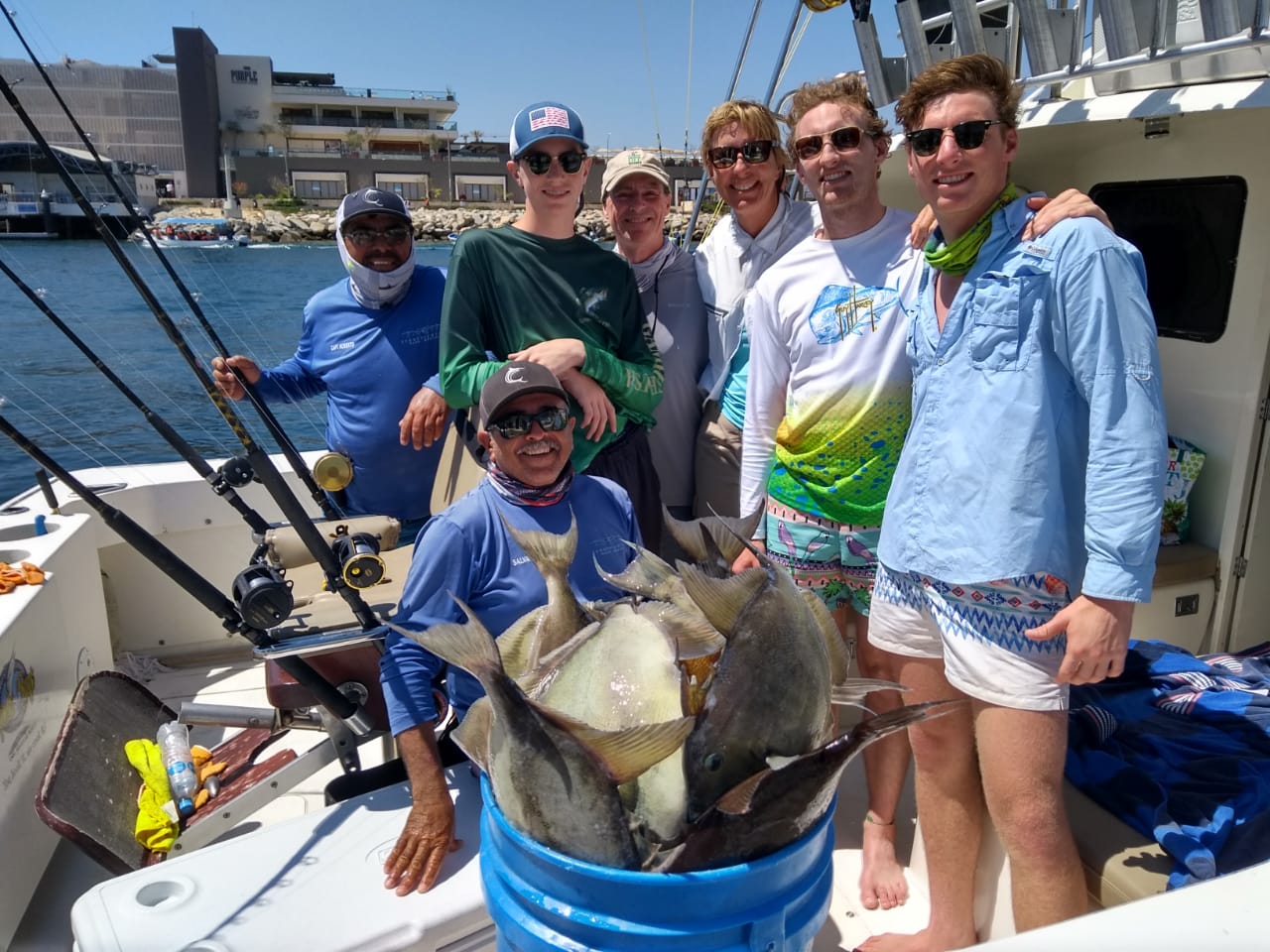 Pisces 31′ Ruthless also had a good week, with 3 Striped marlin released on ballyhoo and caballito bait and a nice 35 lbs roosterfish released of about 35 lbs which took live bait outside of San Jose for anglers Abraham Franco and Scott Halpern from CA. Our Bertram Moppie, Pisces 30′ Karina has quickly become an angler favorite, with consistent fishing since its debut. this week was no different on one of their best days they released 3 striped marlin with anglers from South Carolina aboard. Again, fish hit on live and dead caballito out of Destiladeras. Pisces 31′ Tiburon did equally well with 3 striped marlin released at Destiladeras and one shark released for Gena and Michael Phelps and Josh Pennucci.

One of the only dorado this week was caught by Viking Yachts Pisces 72′ Tag Team  (only 3 caught this week total for our boats). They found the dorado, of about 15 lbs out at Palmilla and hit on ballyhoo bait. Two striped marlin also released, hitting on petrolero lure and ballyhoo bait. 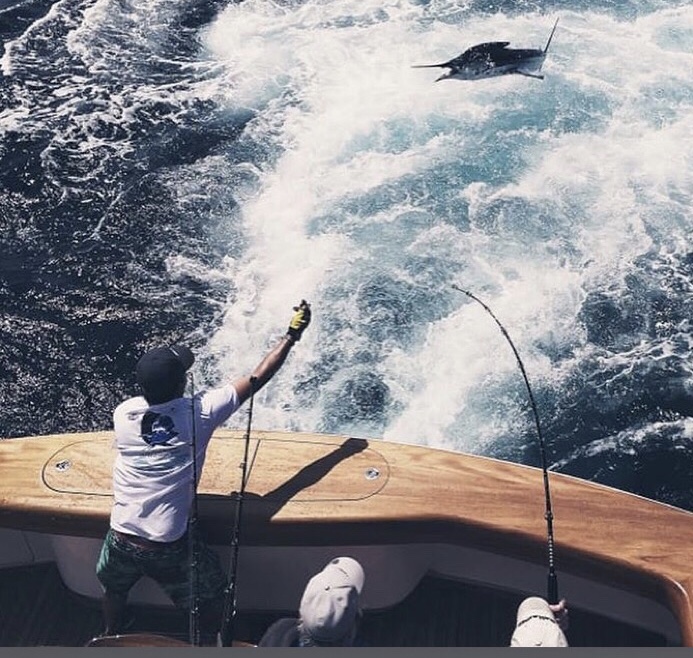 Pisces 72′ Tag Team with a striped marlin at the leader 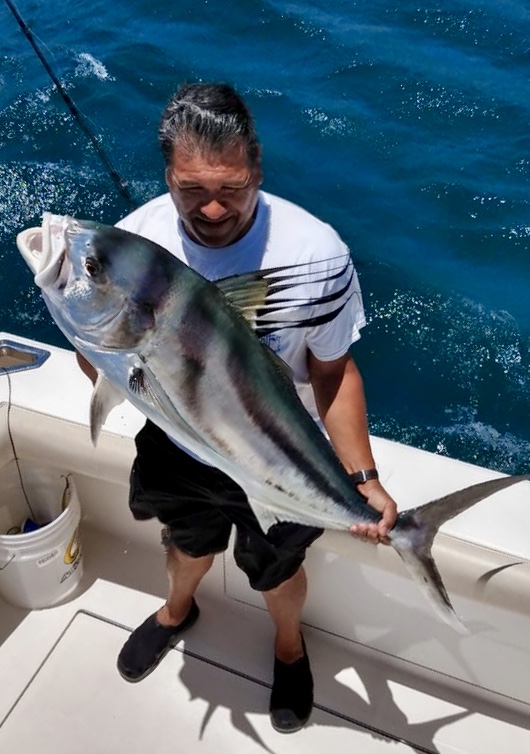 For more roosterfish, Pisces 35′ Knot Workin‘ had a great day with 6 roosterfish released (of about 15, 40 and 50 lbs each), 8 bonita and 3 yellowtail between 12 and 16 lbs each. All fish hit on the Pacific side, between Las Margaritas and the Old Lighthouse. The roosters hit on live caballito while the others it on the yoyo. Anglers were Alex Christiansen, Amanda, Nicolas and Rene Corona from CA.

WEATHER CONDITIONS: Good conditions overall, calms seas, with only a day or so of wind. Sunny, warm days mostly. 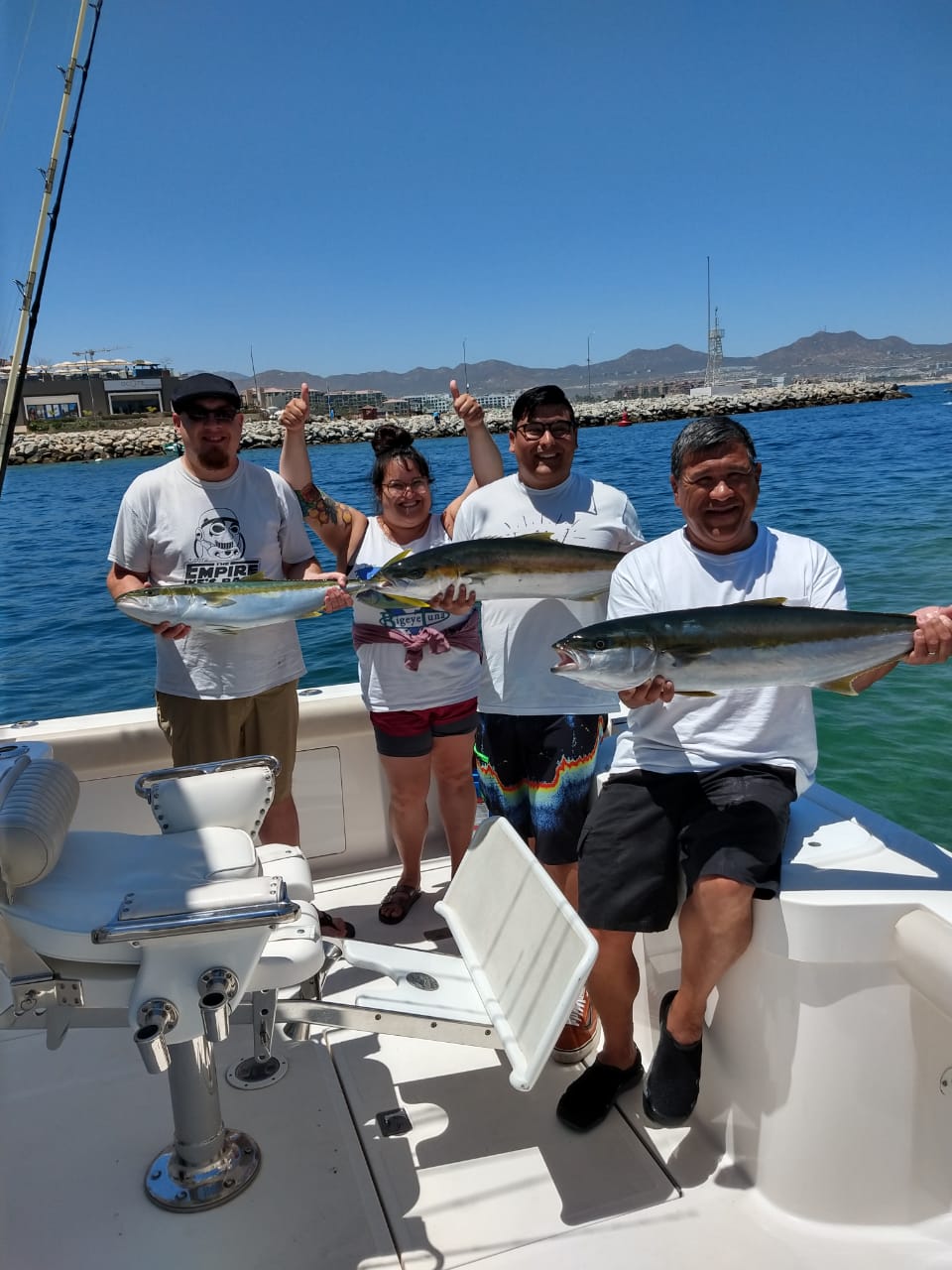