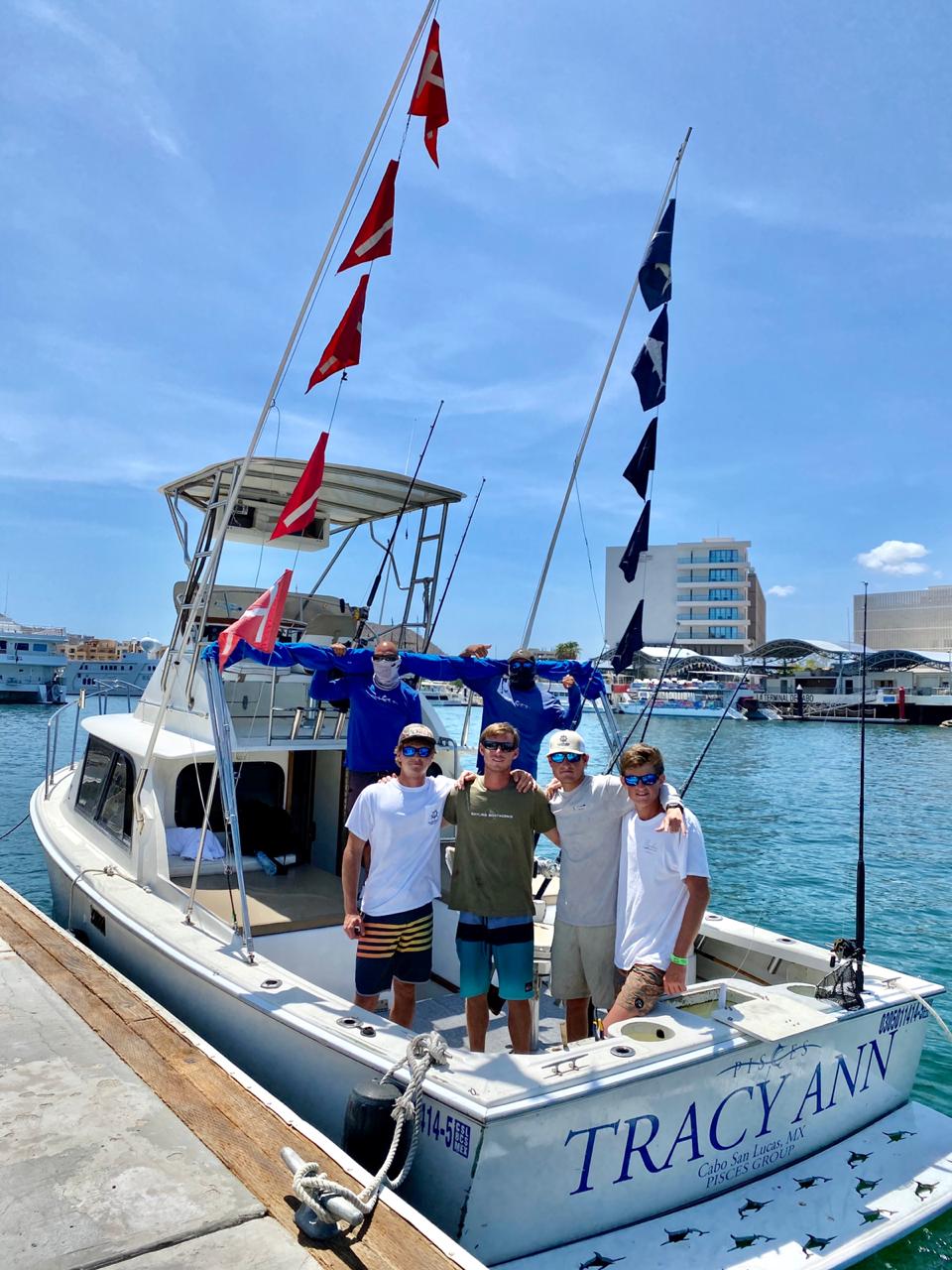 Decent fishing this week, even with the port closed two days due to a (very) far off storm, that really only brought a bit of a swell and not much more. Still, fishing was allowed again by Port Captain starting Wednesday, July 1st. For a shorter fishing week, boats did well to release 50 Billfish total, which included Striped Marlin and Sailfish (plus we had one or two Blue Marlin that got away). Two of our top Billfish boats this week: Pisces 31′ Ruthless, went 6 for 8 on Striped Marlin and  Pisces 31′ Tracy Ann had 4 Striped Marlin and 2 Sails released, plus a decent Yellowfin Tuna kept in one day. We also had our first overnight fishing trip of the year, aboard Pisces 37′ BBII, which headed up the Cortez side to Los Frailes. Ryan Caughren aboard reported “The East Cape is littered with Striped Marlin right now, big ones. We released 5 Striped, lost one Blue Marlin and had 7 Yellowfin Tuna“. Total, this boat went 9 for 13 on Marlin on their trip. Things are looking like they will be good for the Bisbees East Cape Tournament, which is still set for August. And although we had 40 Tuna for the fleet this week, they were quite difficult to find, with schools moving quickly. Most were found with the porpoise, but not too many landed. Most boats targeting them averaged 2-6 each. Top tuna boat was Pisces 42′ Caliente , with their biggest just shy of 50 lbs for Father and Son Anglers the Flynn’s. They landed 8 Yellowfin total, then headed inshore for Roosterfish and Grouper. Other fish caught this week included Sierra Mackerel, Red Snapper and Jack Crevalle. Plus, only one dorado landed for the fleet, caught aboard Pisces 35′ Bill Collector 2. We also received report of a Swordfish caught this Thursday out of the 95 Spot; it took casted live bait from aboard boat Auriga. 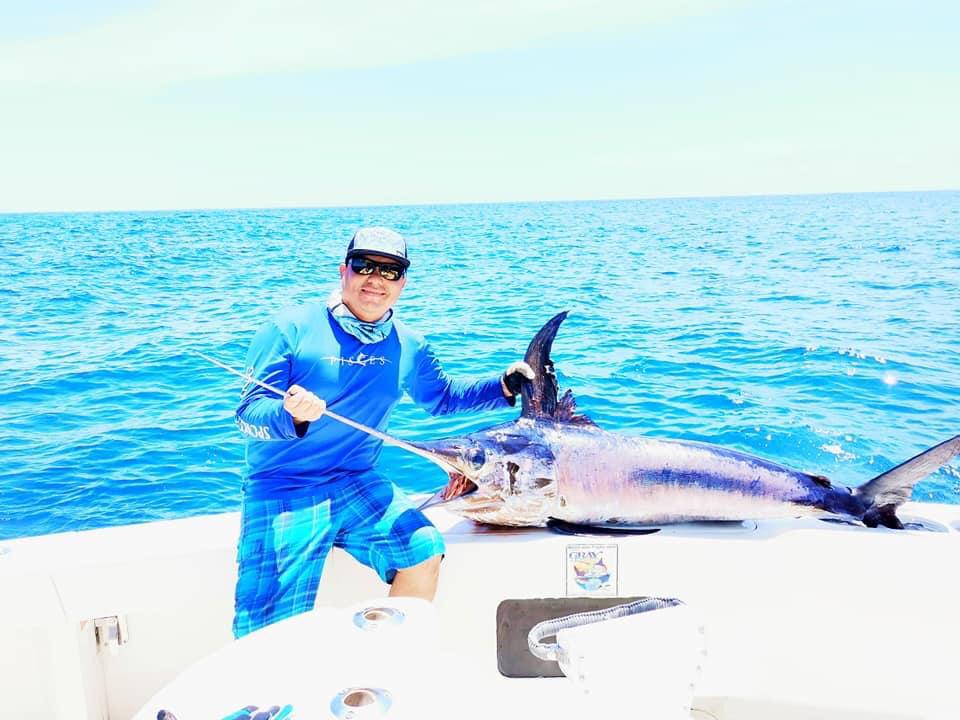 Swordfish caught this week on outside boat Auriga

Ruthless found their 6 Striped Marlin about 17 miles out at the 95 Spot, and caught them on live and dead caballito bait. Marlin averaged between 100 and 120 lbs for Jeff and Jereme Joseph from Argyle, TX. Pisces 31′ Tracy Ann headed to the 11:50 Spot for their Marlin, also hitting on live and dead caballito. Sailfish were very decent size, averaging between 80 and 100 lbs each. Stripeys were about 100 lbs. Yellowfin, about 20 lbs, hit on cedar plug. 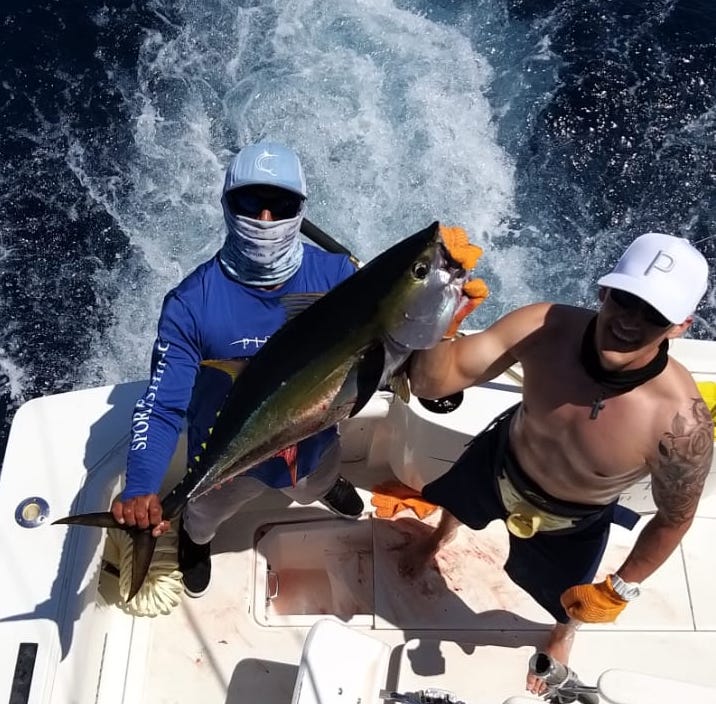 Pisces 42′ Yahoo headed to Cabrillo for their Marlin, releasing 5 total on live caballito and lisa. Marlin averaged 100 lbs each. Pisces 31′ La Brisa did well to release 2 Striped Marlin this day as well and be back at the dock by 11:30 AM, plus landed some nice Yellowfin in the week. 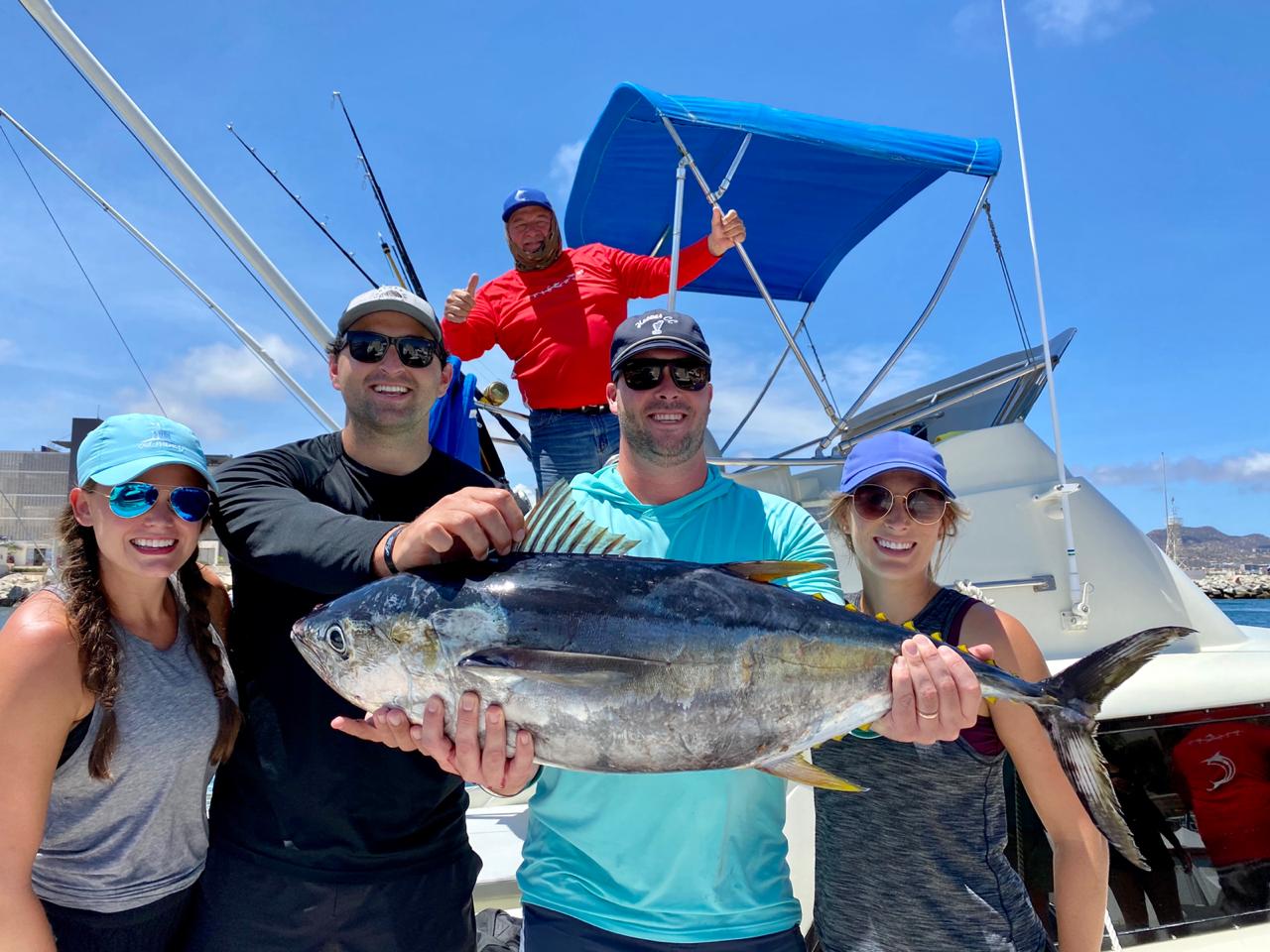 Pisces 38′ C Rod  released 2 Striped Marlin this day as well. Pisces 30′ Karina  did well with 3 Striped Marlin and 6 Tuna total in the week too, and Pisces 31′ Tiburon had 4 Yellowfin from 20 to 40 lbs each. To close out the week, Pisces 28′ Andrea had 2 Yellowfin of about 10 and 30 lbs, plus a nice Striped Marlin of approximately 130 lbs tagged and released by Amanda Gilbert from Florida. 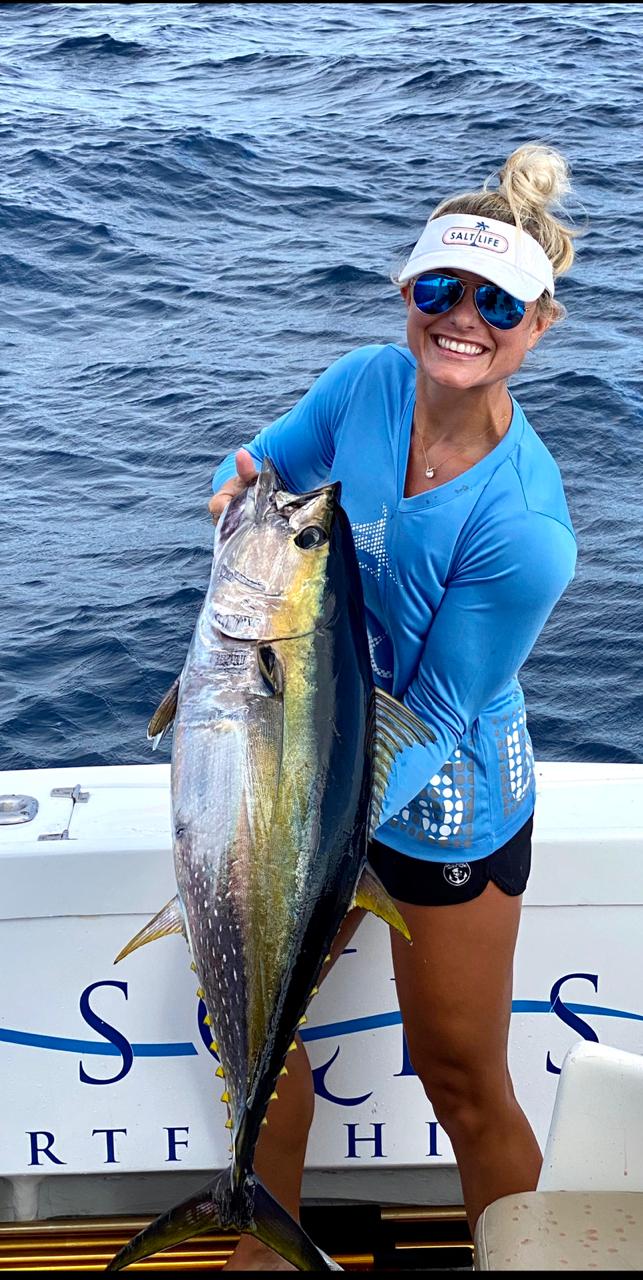 Pisces 42′ Caliente  with Captain Jaime Gonzalez at the helm, found their 3 Marlin yesterday out of Cerro Colorado. This was Clare Flynn’s first ever Marlin release and was aided by her son Garrett, 12 years old, at the leader. The Flynns fished a day prior and caught 8 Yellowfin Tuna out of the 95 Spot, on cedar plugs and hoochis, plus a Roosterfish of about 20 lbs and a Grouper on lisas at Cabeza Ballena. 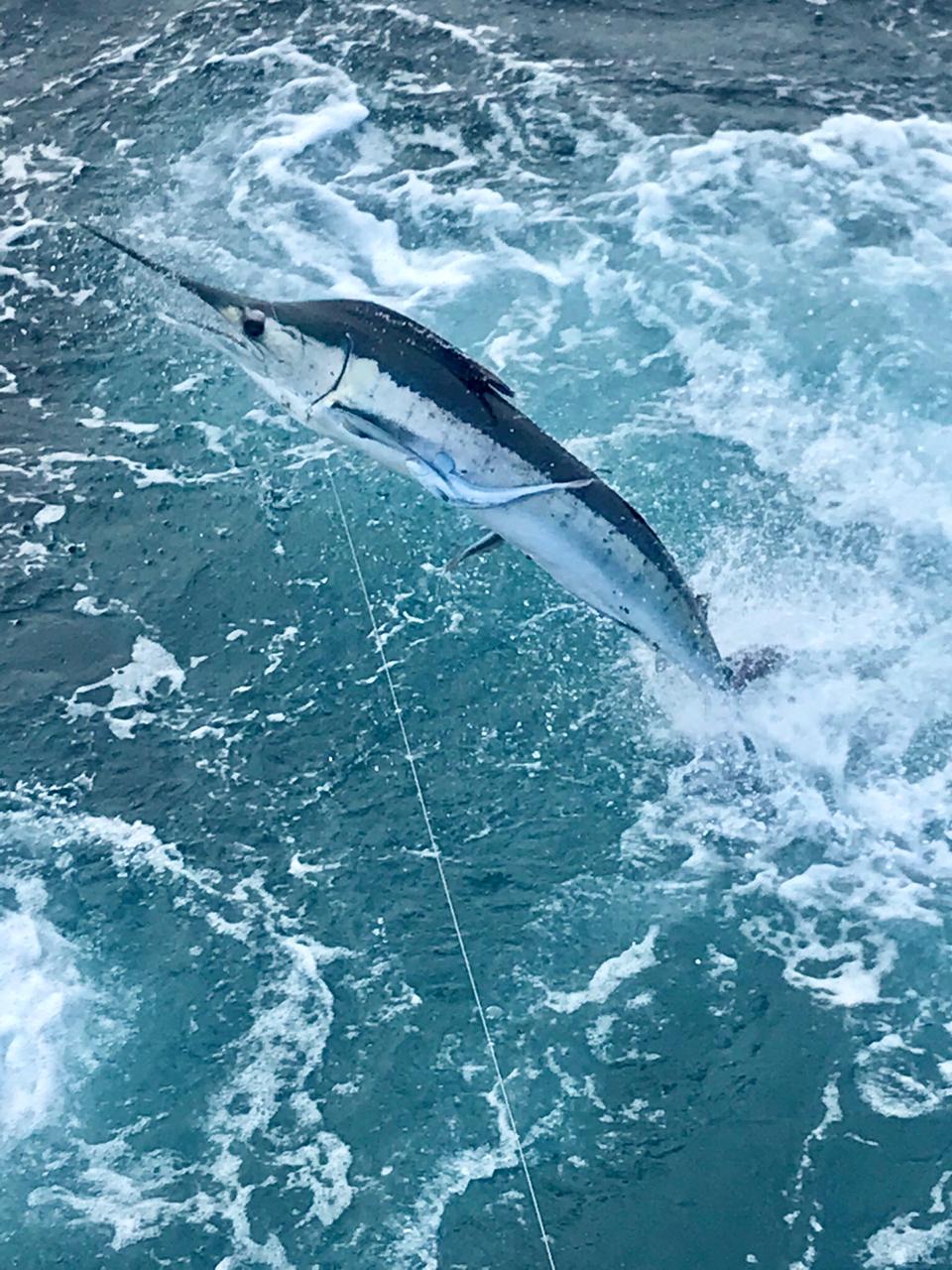 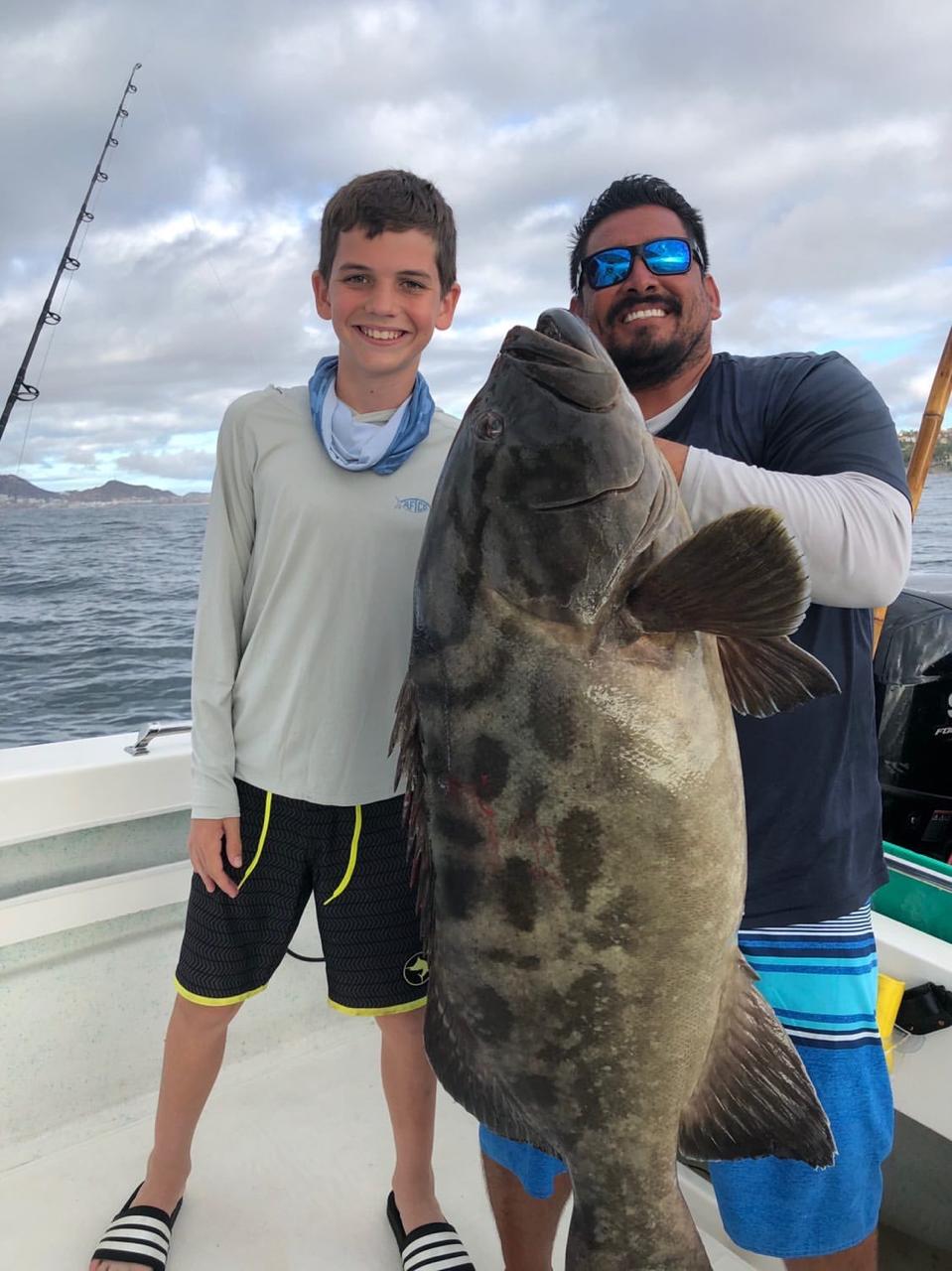 They also gave us the report from one day of fishing with Capt Jaime Gonzalez Jr where they landed a Monster Grouper, three Roosterfish up to 40 lbs and a big Jack Crevalle. 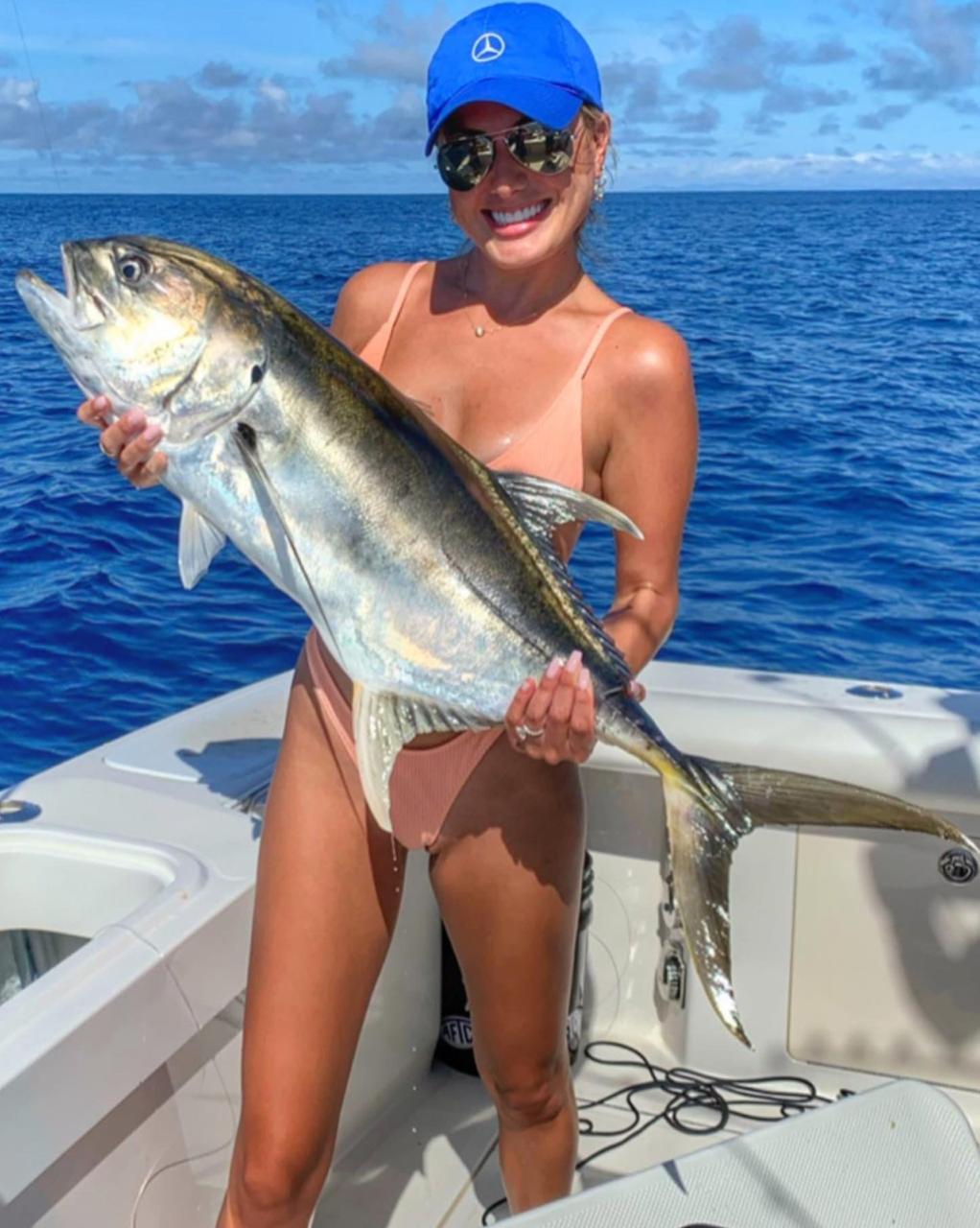 Pisces 35′ Bill Collector 2  also had 2 nice Jack Crevalle, between 10 and 20 lbs each, plus 2 Roosterfish of up to 15 lbs at Punta Gorda. The Jacks took ballyhoo and the Roosters hit on lisas. Anglers Jason Jeter and Kayla Vanfleet from Texas, did well to land 4 out of 5 Striped Marlin and successfully tag and release them. The largest of their billfish weighed aprox 150 lbs, taking ballyhoo and caballito bait. 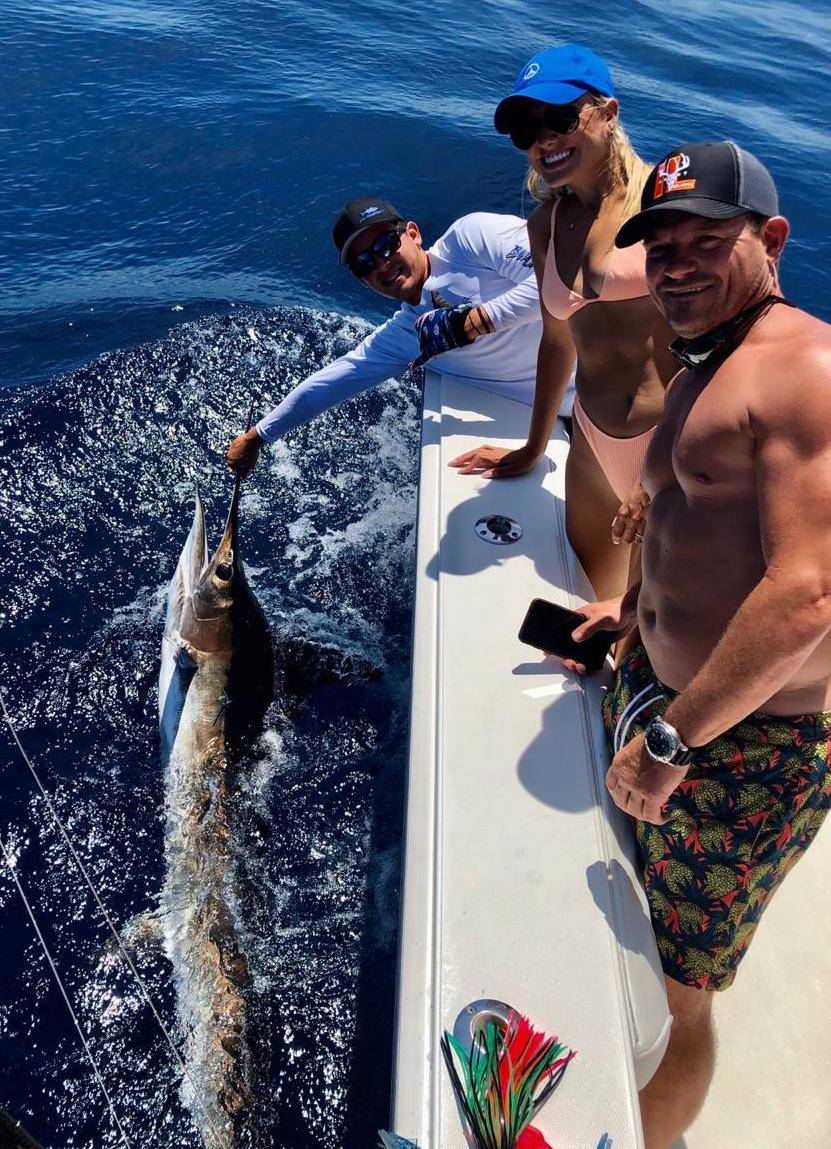 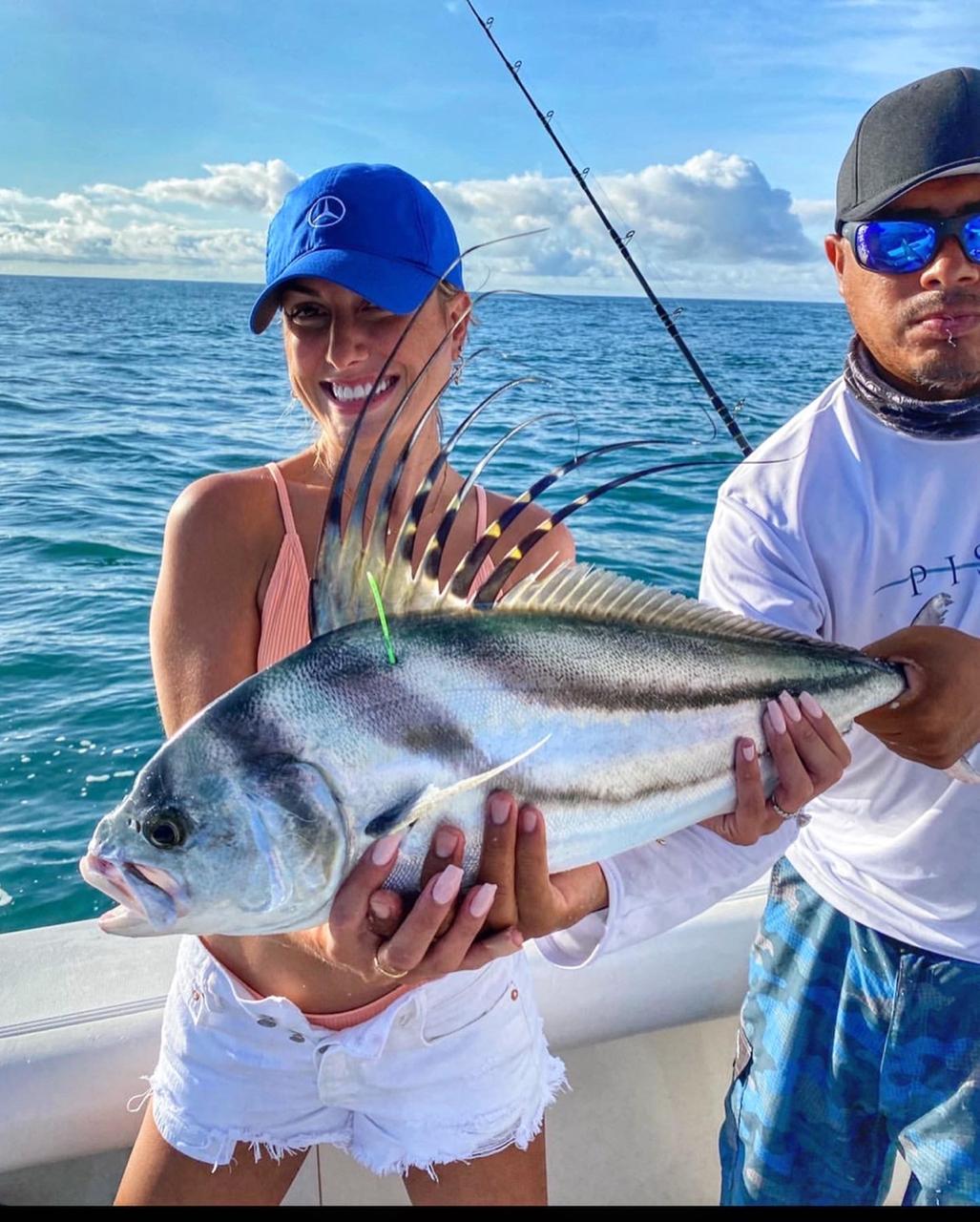 Pisces 35′ Bill Collector 2 was also the only boat this week to land a Dorado, this one of about 16 lbs, taking ballyhoo close to Destiladeras. Anglers Jim and Nick Swafford, Joey Van Ness and Ward Miller also released 2 Striped Marlin outside of Gordo Bank.

LOCATION: Pacific side for Roosterfish and Sierra mainly, and all over the Sea of Cortez side from Punta Gorda to Cabrillo to Cabeza Ballena, 95, 1150 and 120 Spots for Marlin and Tuna.

WEATHER CONDITIONS: Some swell around 3 to 4 ft, but no wind, partially cloudy days.