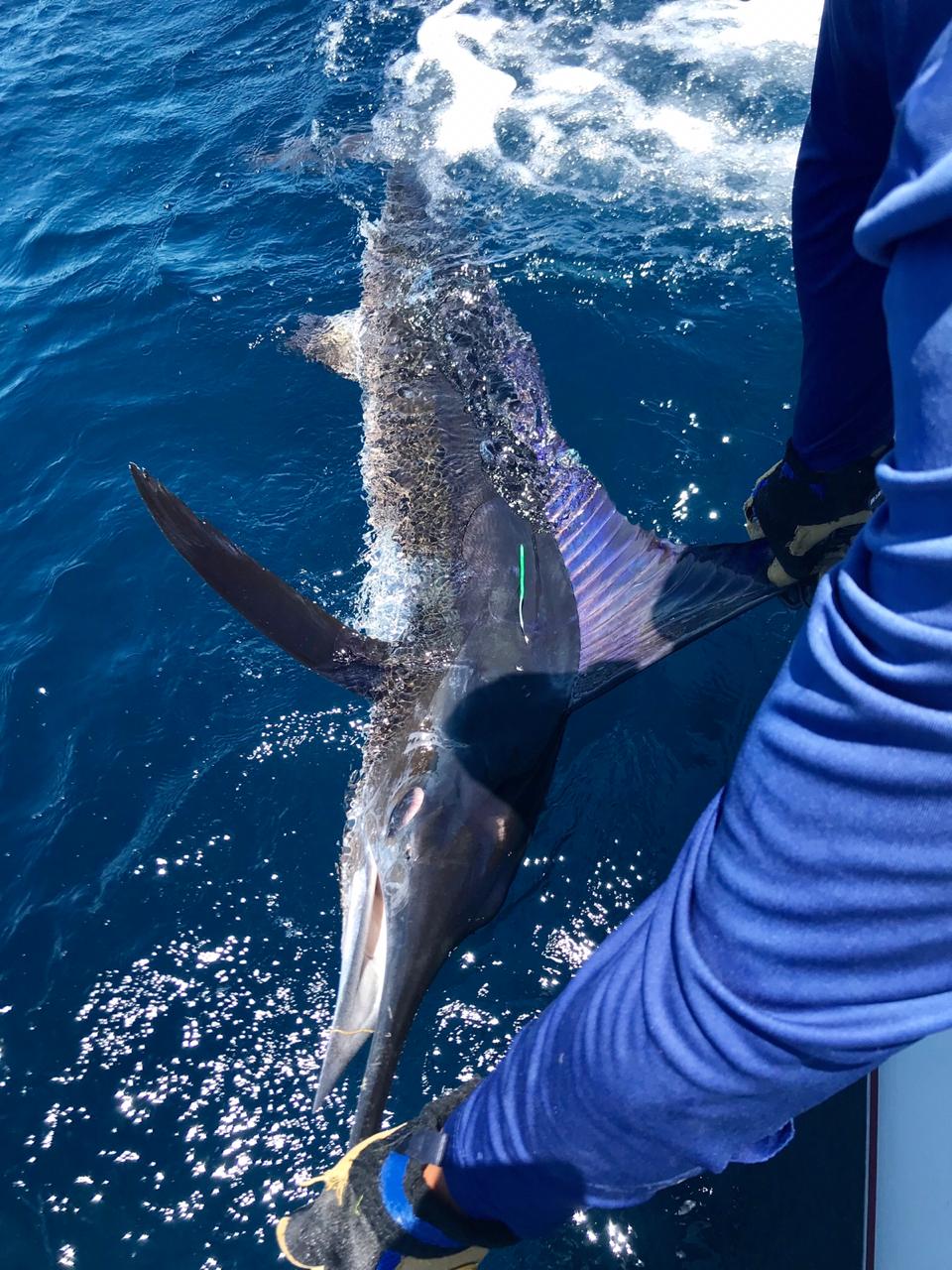 The week began with nice hot weather and warming seas, on the Cortez side at least. The week temperatures on Pacific side remained at about 70 F while the Cortez was quite a few degrees warmer, even up to 80 F. But again, as the week progressed temperatures decided to cool again, between 70 – 75 F even on some parts of the Cortez,  keeping the crews on their toes. Lots of sharks around, from mako to hammerhead to silkies. The marlin bite slowed a bit, with up to 2 marlin caught per boat and the boys had to work hard to land them (all released). They used live bait, mostly caballito and some lisas to get them to bite. It was nice to see some dorado though, even if not in huge amounts, start to show up. Mostly dorado ranged from 8 to 15 lbs each and hit on ballyhoo and lures. Porpoise and tuna schools were easy to find this week, if you traveled the 25 to 35 miles to find them that is. But it payed off, boats caught up to 15 tunas each with fish ranging from 10 to 20/25 lbs each, usually hitting on cedar plugs. A few wahoo were sprinkled into catches as well. Inshore action remains good; yellowtail, sierra mackerel, roosterfish, jack crevalle, triggerfish and some grouper were caught this week. We also had an exciting recapture of one of our tagged and released roosterfish caught last week! 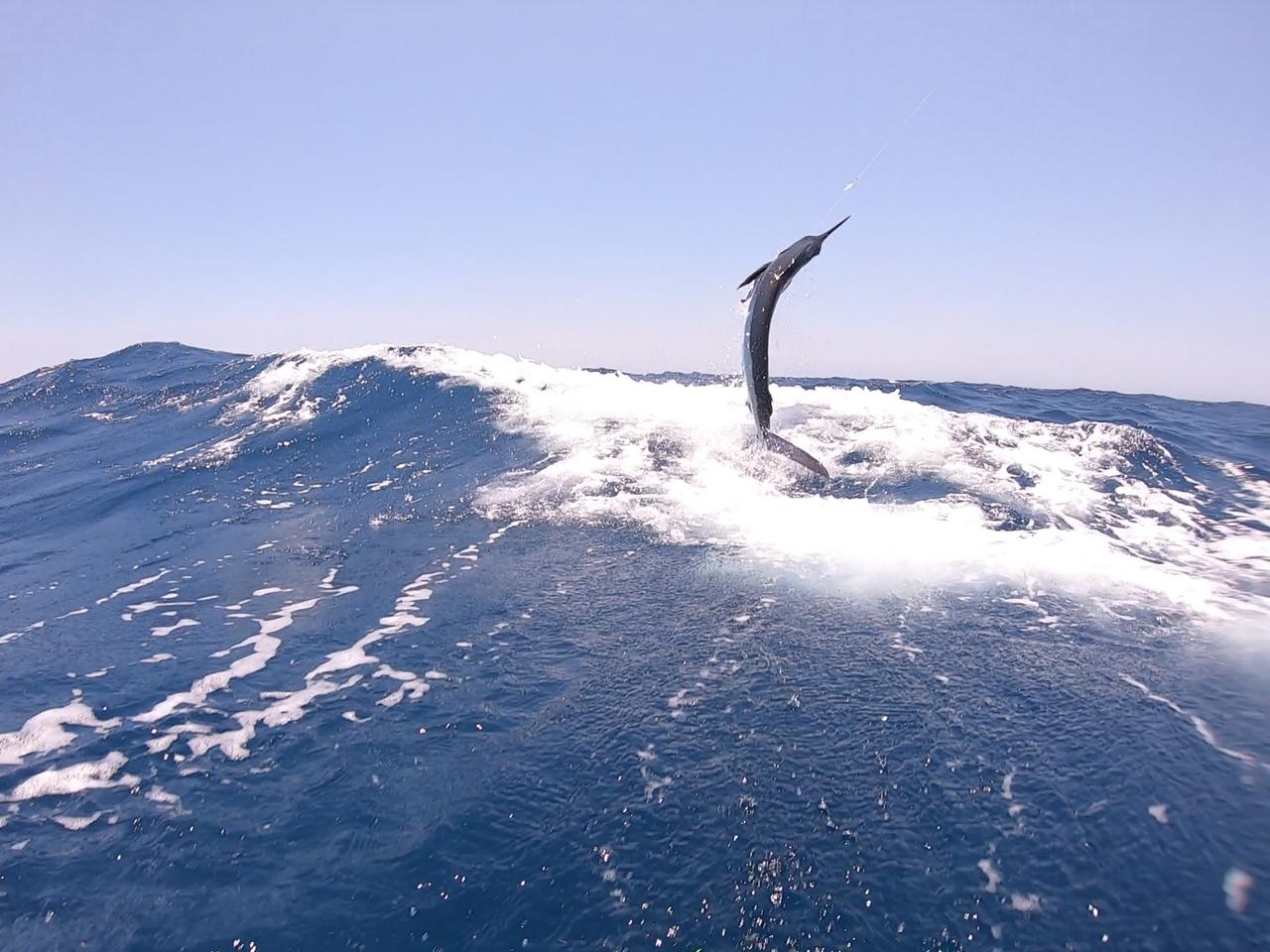 went 2 for 3 on Striped Marlin

Starting off with some of our marlin catches this week, we saw Pisces 42′ Hot Rod release two small striped marlin of about 70 lbs each close to port, only about 3 miles off the Old Lighthouse. They also caught a 10 lbs skipjack there for anglers from Waco, TX. Pisces 32′ Bill Collector also caught and released 2 marlin, these were on the larger side, approx 160 to 180 lbs each. They hit on dead caballito bait close to Chileno and Cabeza Ballena area. Big Brother Pisces 35′ Bill Collector 2  did well with 2 striped marlin of about 80 lbs hitting on live caballito and ballyhoo bait out of Chileno area for anglers Derek Stevens and John Voight from CA. The next day Pisces 35′ Bill Collector 2  released one 70 lbs stripey as well, this time hitting on a petrolero lure at the 11:50 Spot. Anglers also caught 8 yellowfin tuna of up to 20 lbs on hoochis and released 1 silky shark.

Pisces 31′ La Brisa and anglers Bart and Patricia Petitclerc caught and released 2 striped marlin of about 150 lbs each on live caballito at the Old Ligthhouse. Harrison and Morgan Lipscomb also did well to catch and release 1 Striped Marlin along with 1 dorado of about 10 lbs with the La Brisa. Both were caught at the Old Lighthouse as well. 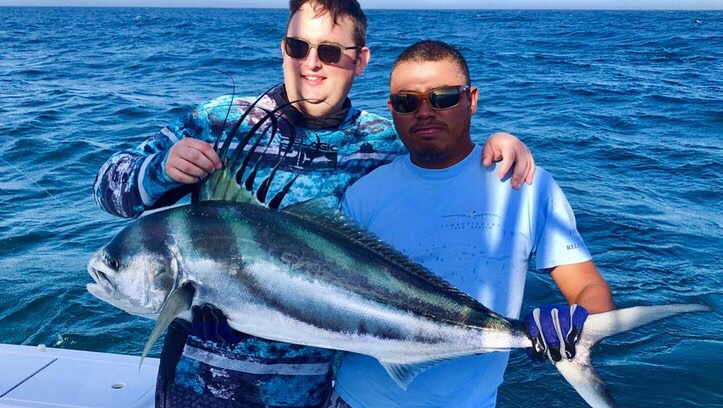 Pisces 35′ Bill Collector 2 also did some inshore fishing this week, with anglers Derek Stevens, John Voigt, Stephen Alarcon and Trevor Jones doing a great job on board once again. They tagged and released their 3 roosterfish perfectly – great work that will hopefully bring us a recapture and important info on this fishery though our partnership as a Research Center for Gray Fishtag Research. The roosterfish weighed approximately 30, 50 and 60 lbs each. They hit on live lisa bait at Los Arcos area on the Pacific. They also caught and released 1 Striped marlin and 9 bonita on green/white hoochis. 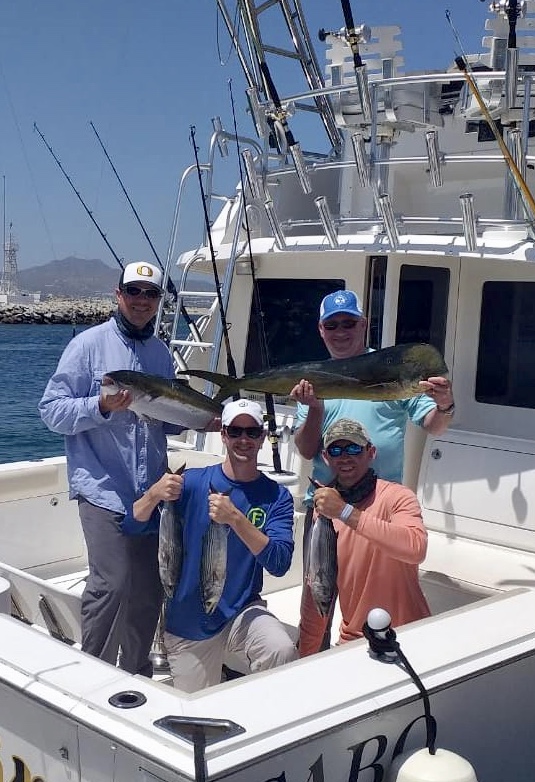 Pisces 35′ Knot Workin’ had a good day midweek with 1 yellowtail of about 15 lbs which hit on live caballito at Las Margaritas, as well as 1 dorado of about 12lbs at Los Arcos and 1 Striped marlin and some bonita as well. Anglers were Andrew Jones, Gregory Ostendorf, John Benton Jr, Jordan Barry Benton.

More dorado for Pisces 30′ Moppie Karina with anglers aboard releasing the fish, which hit on feather lures at the 95 Spot.  The next day they found luck with 1 marlin released at Cabeza Ballena and then headed for some small game, catching 1 red snapper at Cabo Real area along with 4 triggerfish for Gabriel Cohen form FL. Later in the week they headed for the yellowfin, successfully landing 15 of them total. The fish hit on feathers and cedar plug lures out of San Jaime for the Valerio family from Utah. 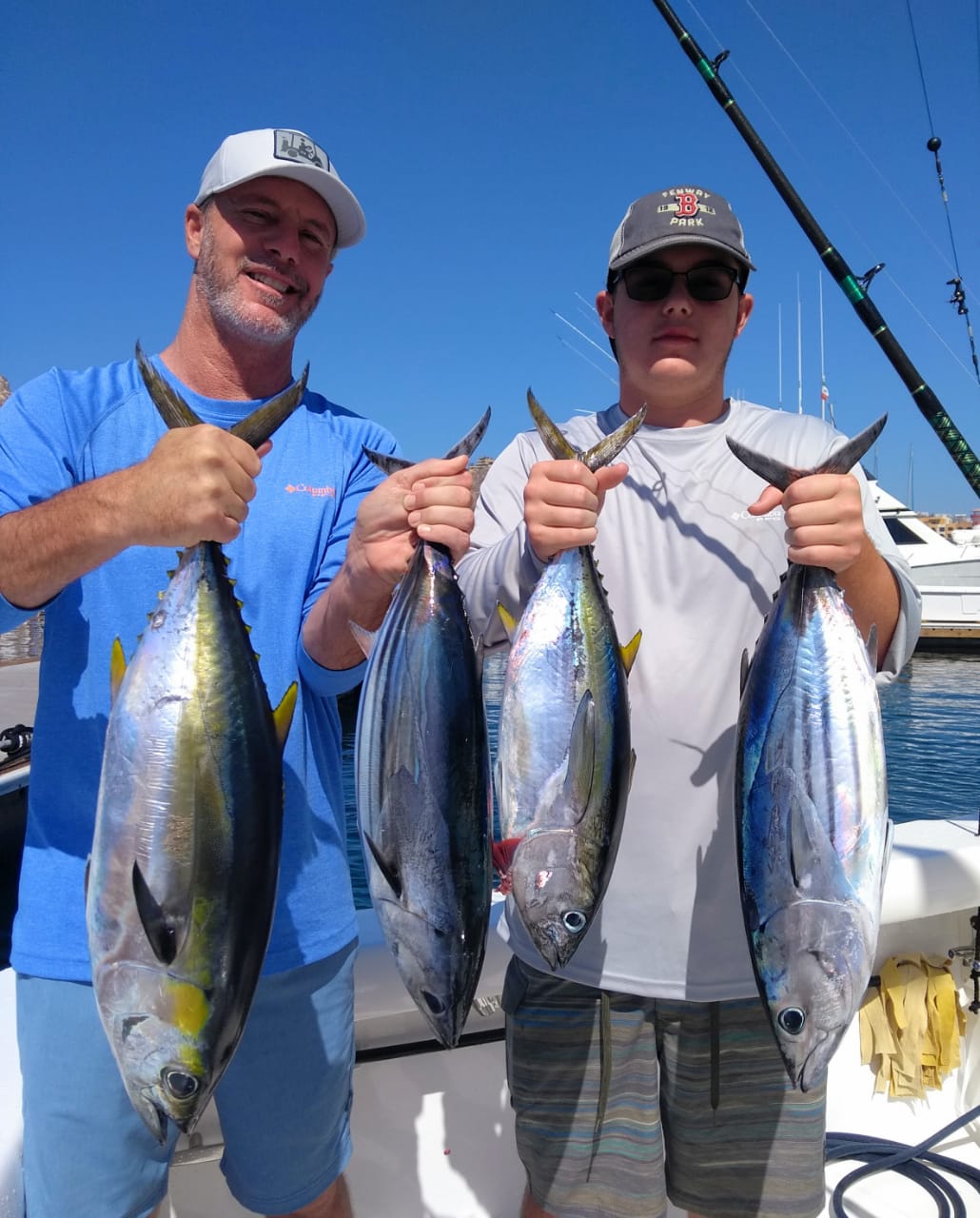 Pisces 31′ Rebecca headed to the 200 Spot (about a 35 mile run) for tuna, and caught 14 yellowfin ranging from 10 to 15 lbs each, on feathers and cedar plug lures. They also caught and released a striped marlin on live caballito bait. Anglers were Gary Keppers and Lin Sun from Morgan Hill, CA. The day before, Pisces 31′ Rebecca had found luck in this same spot, catching 16 yellowfin on cedar plugs and feather, all around 15 lbs.

Pisces 31′ Ruthless also fished the 200 Spot and caught 22 yellowfin tuna from 10 to 20 lbs each. On the next day they headed to Cabrillo Mount and found 3 dorado of about 10 lbs each which hit on ballyhoo and also caught 10 yellowfin on cedar plugs for the Claassen family. Then a surprise wahoo catch on a petrolero lure while at the Cabrillo mount the next day. The wahoo weighed an approx 40 lbs, and anglers also released a silky shark and kept 4 yellowfin that hit on cedar plugs. 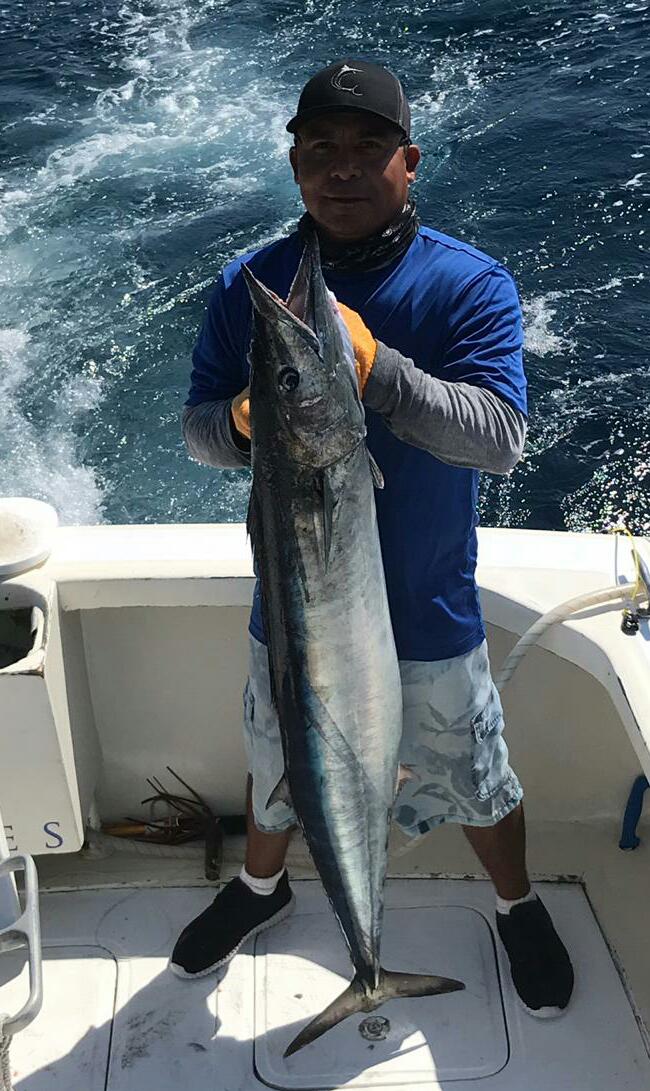 Pisces 60′ Reel Machine also caught a nice wahoo of about 35 lbs wahoo on ballyhoo at the 95 Spot and 2 yellowfin tuna on a flying fish lure .

Inshore we saw Pisces 27′ Panga 3 Amigos release 4 roosterfish ranging from 10 to 30 lbs each and hitting on live bait at Pedregal area. Pisces 25′ Panga Poseidon also caught and released 2 roosterfish of about 35 lbs each on caballito as well. Anglers were Jake and Jeff Stoutland from PN. 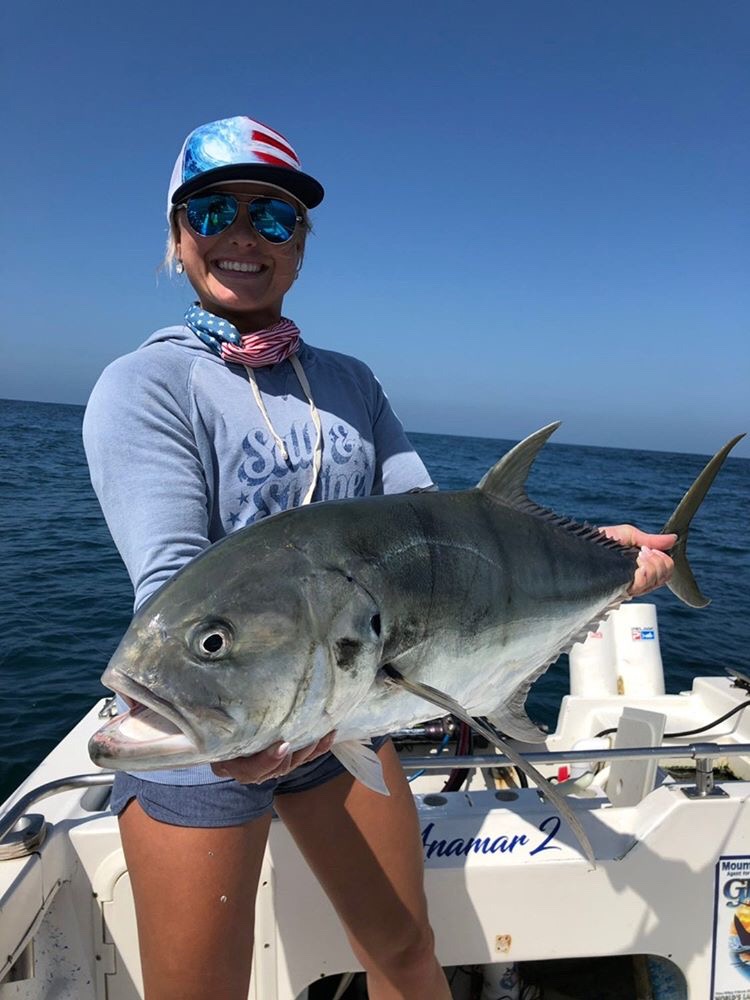 Angler Amanda Gilbert with a nice Jack Crevalle released on Pisces 24′ Anamar II
Pisces 24′ Anamar II caught 2 yellowtail on hoochis at Pedregal and next day caught and released a Jack Crevalle at Los Arcos and kept a bonita which hit on a pink lure for angler Amanda Gilbert from Florida. Pisces 35′ Valerie also did well to catch 9 yellowtail on feathers and hoochis and 9 bonita at the Old Lighthouse.
Our exciting roosterfish recapture came on Sunday when Captain Tony Araiza contacted us to let us know he had re-released a rooster which had been tagged. He gave us the Tag ID number and we found out that “Gopher” as angler Mike Casida from CA named it, was Initially tagged on Pisces 42′ Caliente at the Old Lighthouse area (Cabo’s Lands End) on the previous Wednesday and recaptured only 4 days later! Captain Tony Araiza was actually shore fishing at Las Margaritas area when he caught the fish (about 35 km NW of where the fish was originally caught). Captain Araiza told us that the fish was still in excellent condition and took only about 5 mins to land. Data will be used to find out more about our Roosterfish population: migration patterns, growth and much more! 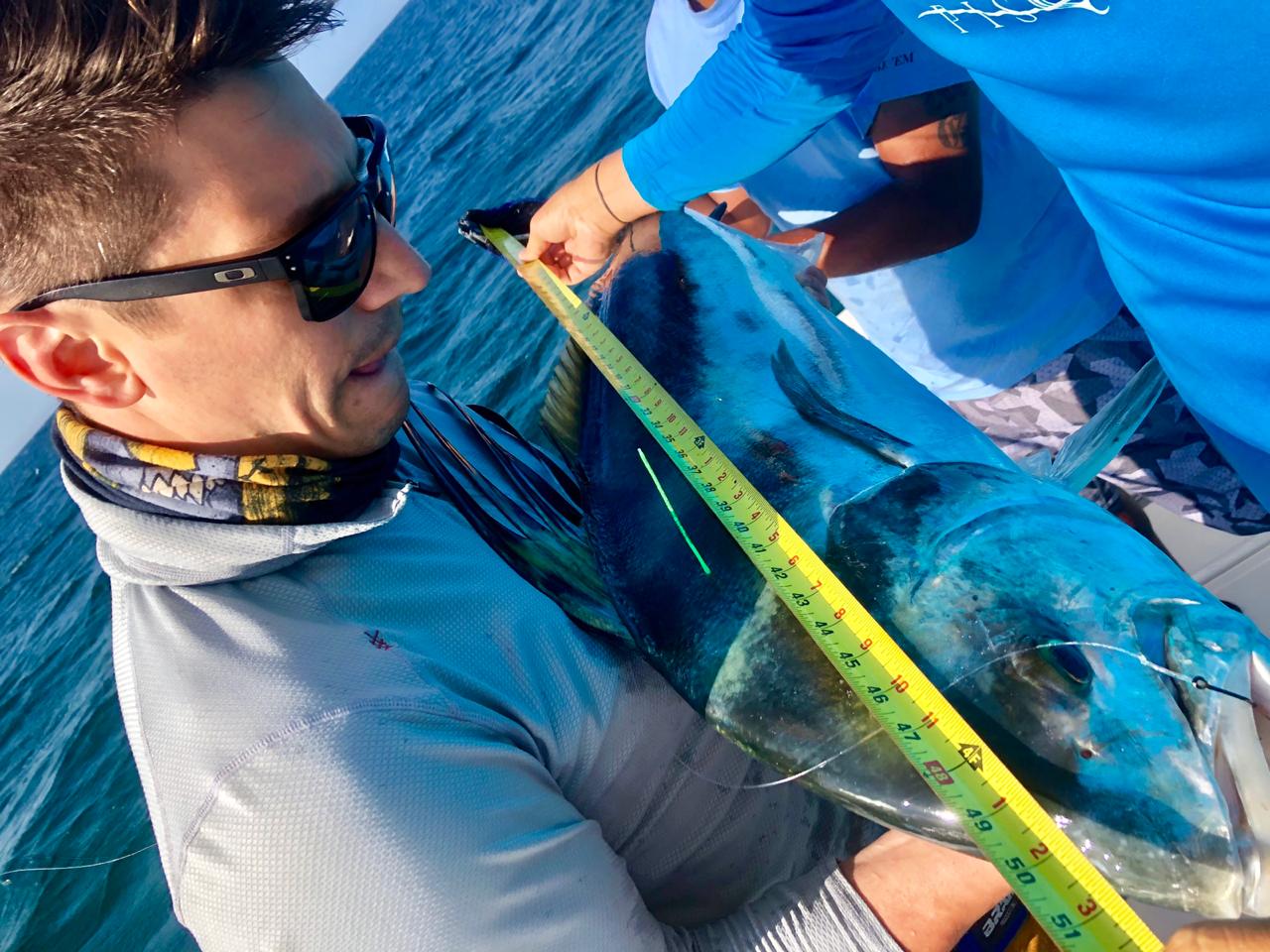 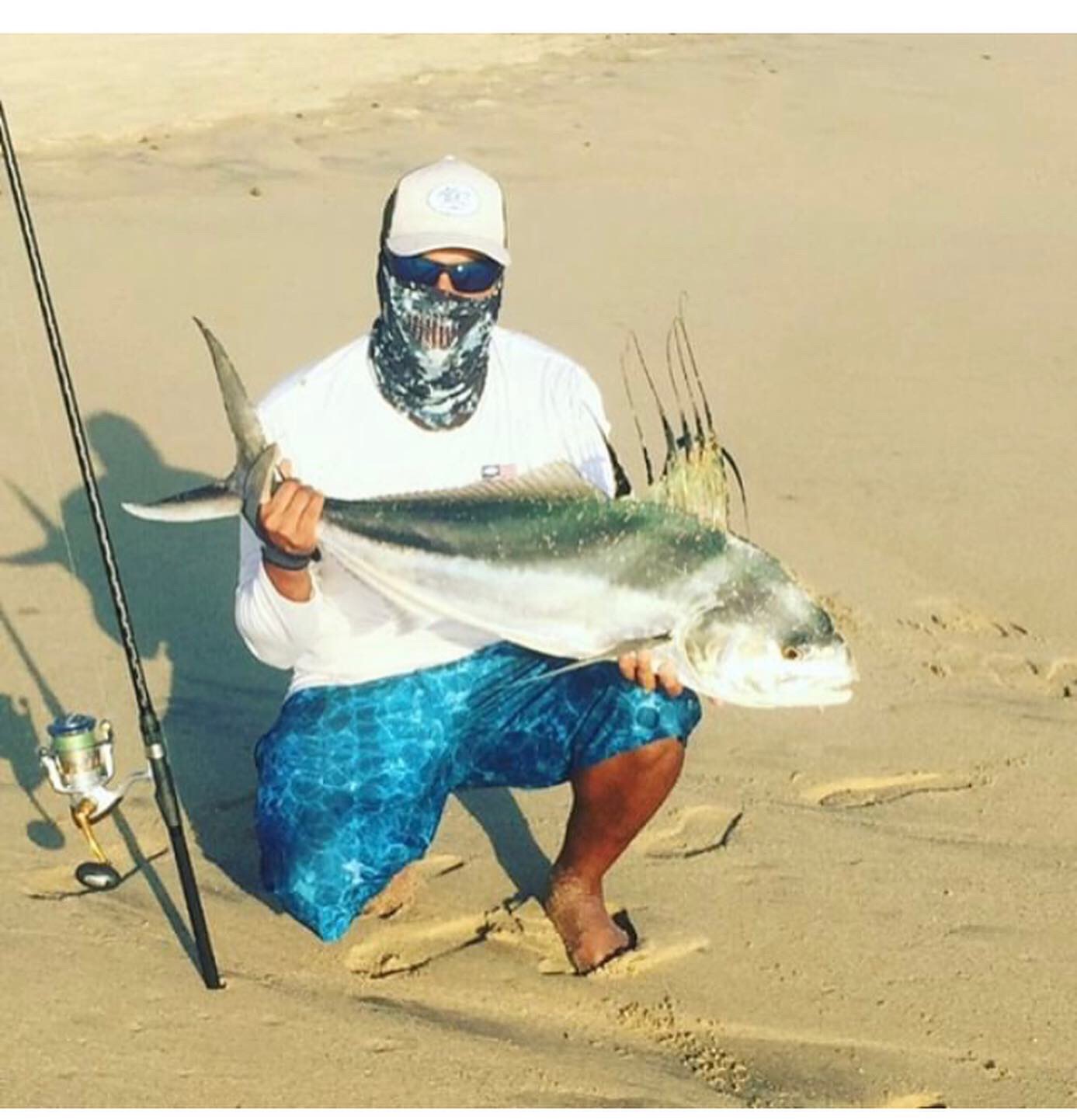 “Gopher” the Roosterfish originally caught on Pisces 42′ Caliente and recaptured and re-released from the beach.

WEATHER CONDITIONS: Sunny skies, Warm weather. Only one day with some wind on Pacifc. Seas 3-5 Foot.