Summer is officially here. Hot temperatures moving in to Cabo, with tuna numbers officially at a high this week, and dorado numbers steadily increasing. Those looking for marlin are still quite successful, with a maximum of up to four stripers caught per boat. Small game catches have consisted only of a few roosterfish and skipjacks. 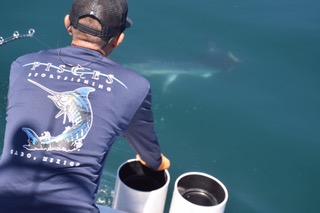 For anglers in search of yellowfin tuna, Pisces 31′ Cabolero delivered. Sixteen yellowfin were caught in total by the Ladwig family on cedar plugs, petrolero lures and caballito bait out of San Jaime Banks. The tuna were of good size, ranging from about 20 to 25 lbs each. 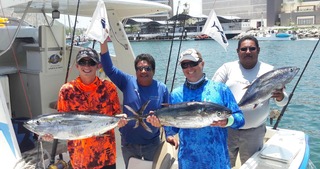 Anglers aboard Pisces Andrea showing off some of their tuna

Pisces 38′ C Rod also did well this week, with 16 yellowfin caught by anglers from Michigan. The fish ranged from about 10 to 20 lbs each and hit on feather and cedar plug lures at about 30 miles South of the Old Lighthouse.  Later in the week, C Rod caught each of our top species, with 2 striped marlin released of about 120 and 140 lbs each (which hit on caballito live bait), 1 small dorado of about 10 lbs and 1 yellowfin tuna of about 6 lbs. The marlin were found out of Cabo Real area, the dorado was closer to Palmilla and the yellowfin was found out from the Old Lighthouse. That’s some hard work being put in by the crew, searching high and low to tick all the boxes for anglers! Good job team.

One of our top yellowfin tuna boats this week was the Pisces 32′ Bill Collector. Decent size fish were caught on July 2nd, by anglers the Ramirez family from Palos Verdes, CA, who caught 15 yellowfin total. The tuna ranged in size from 20 to 40 lbs each and hit on cedar plug and feather lures out 37 miles att he 180 Spot. Noteworthy again, later on in the week, Bill Collector caught 20 yellowfin tuna this time, a bit smaller, with fish ranging from 10 to 15 lbs each. The fish hit on cedar plugs and feather lures a bit closer this time, at about 18 miles out, at the 180 Spot. 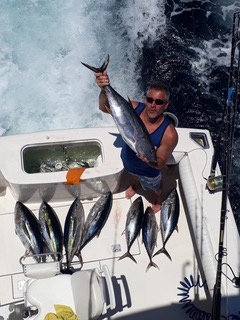 Angler showing off his tunas caught aboard Bill Collector

However, Bill Collector didn’t focus solely on tuna this week. Anglers Juanita McCormick and Melissa Baum from Weatherford, TX, caught and released 4 striped marlin. The fish hit on ballyhoo bait (trolled) and green/yellow lures out of Palmilla. The marlin were all very good size, with the smallest being about 140 lbs,a nd the largest, estimated at almost 180 lbs. 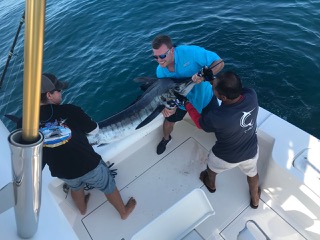 Last but certainly not least, Pisces 42′ Hot Rod had two spectacular days of fishing, with anglers Colin Jones, #42 Safety in the NFL for the Carolina Panthers  and David Lewis from Texas caught and released 4 striped marlin on July 4th. The fish ranged in size form about 80 to 110 lbs each and hit on sardines, close to Chawita area. They also landed two nice dorado in the same area, of about 12 lbs, which hit on caballito bait. The next day for them aboard the Hot Rod was equally successful, this time they went in search of tuna and found plenty! 29 yellowfin tuna caught total, with catch limits respected. The tuna were about 10 to 15 lbs each and hit on feather and cedar plug lures out at the 180 spot.

And for small game catches, the most notable this week was 2 roosterfish caught and released by Lorraine and John Sixsmith from England who fished aboard Pisces 23′ Panga Samantha. The rooster fish weighed about 12 and 20 lbs each and hit on caballito bait at El Tule area.