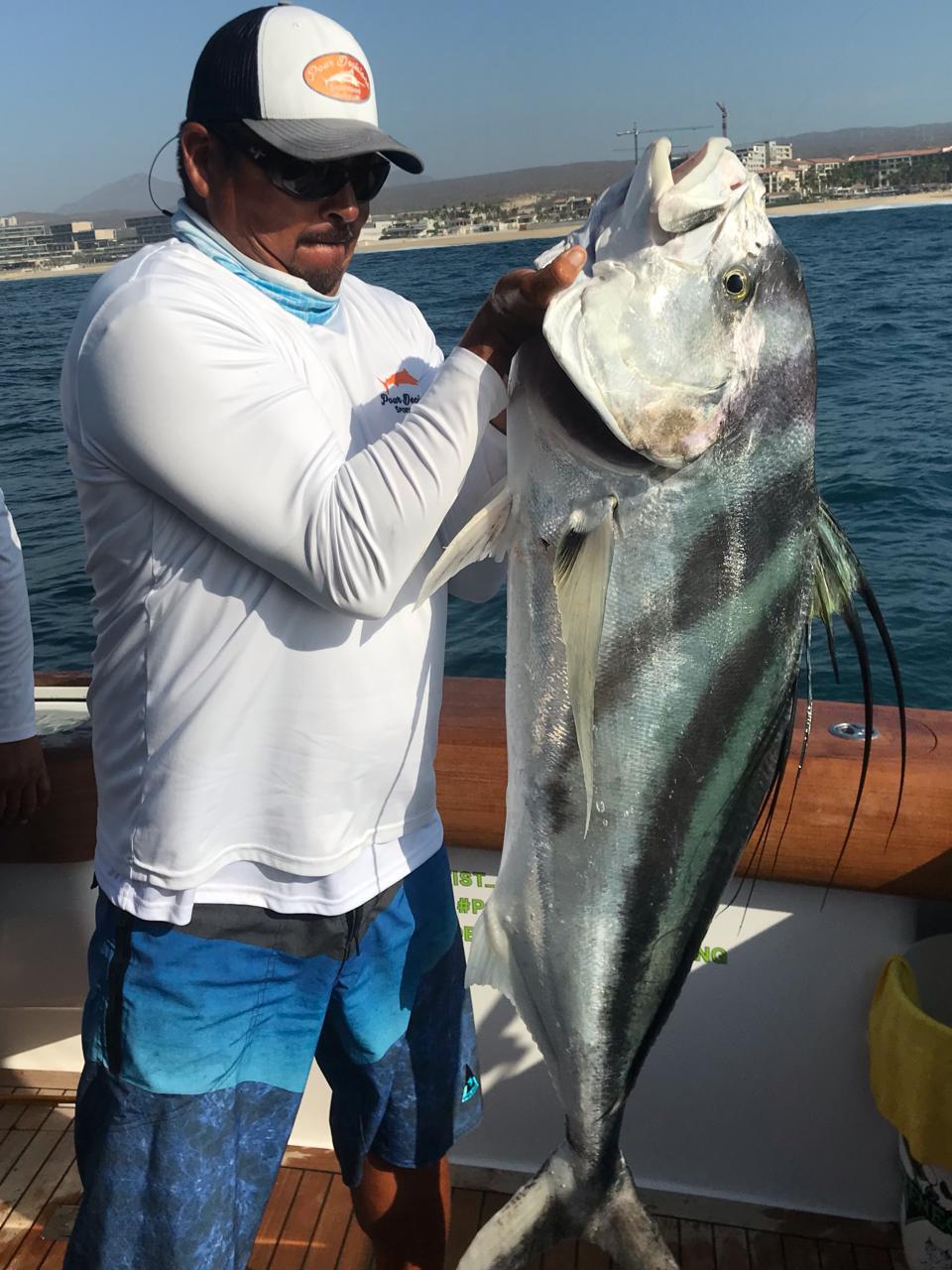 This week’s fishing was not as consistent as last week’s, which we attribute mostly to the inconsistent weather. The water temperatures, although not drastically, did lower to around 76F, whereas ending last week we saw them at about 82 F. Winds again brought difficulty to fishing, as speeds hit up to 20 Knots; but this time not only on the Pacific but also on some parts of the Sea of Cortez (although wind picked up mostly after midday). With this said though, we did begin to see the dorado finally start to show up, and in slightly bigger numbers. On the East Cape there were reports of a few dorados of about 50 lbs each which is great news especially with the Dorado Shootout Tournament coming up in Los Barriles, July 20th.  Marlin numbers totaled 126 releases this week, down from last week (but in all fairness this also has a lot to do with the two tournaments that took place then, the Pelagic and ILLTA). Tuna was scarce, mainly because anglers preferred not to go out the 40 miles to find them with the weather conditions. Instead, they stuck by closer for the marlin or headed inshore for roosterfish, sierra mackerel and snapper, which were very productive; for example, we had 8 roosterfish released on one boat on its best day. 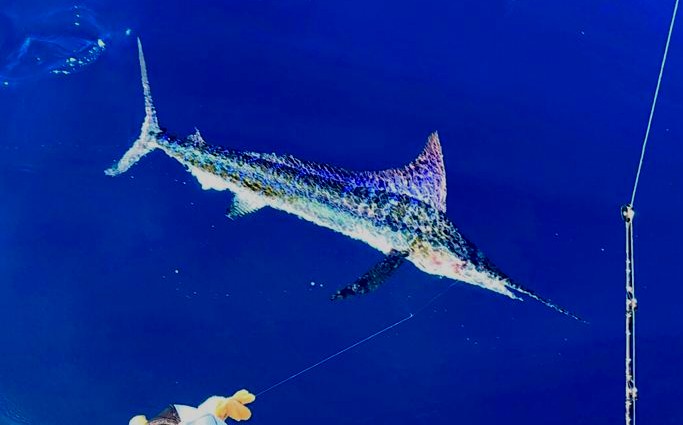 Beginning with some marlin catches of the week, we had the 61′ Viking Pisces Pour Decisions catch and release 4 Striped Marlin between 100 and 150 lbs each which hit on live caballito and ballyhoo bait at the 11:50 for anglers from TX. Similarly we had 48′ Viking Pisces Listo release 4 striped marlin on this same day using the same technique ballyhoo/live bait at the 11:50. Pour Decisions also released a monster 50 lbs roosterfish this week, out by Cerro Colorado area. 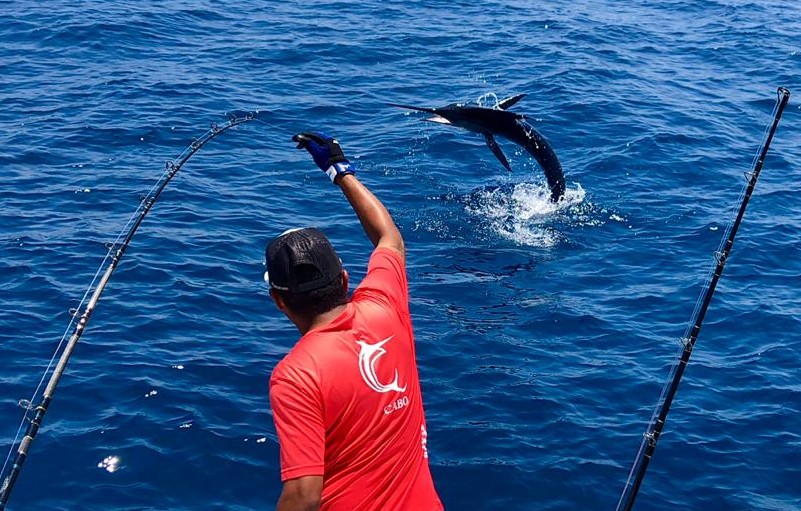 Pisces 35′ Bill Collector 2 used the same fishing tactics successfully, although their fish were slightly smaller, ranging from 60 to 100 lbs each.   Yesterday Pisces 35′ Bill Collector 2 had a great day, with 2 striped marlin released which hit on ballyhoo and live caballito bait all the way out at Destiladeras on the East Cape. They also caught  6 Red Snapper on dead weighted bait there. All snapper averaged between 10 and 15 lbs. Add to that a bonita as well and then a nice amberjack which hit on the yoyo at Punta Gorda. 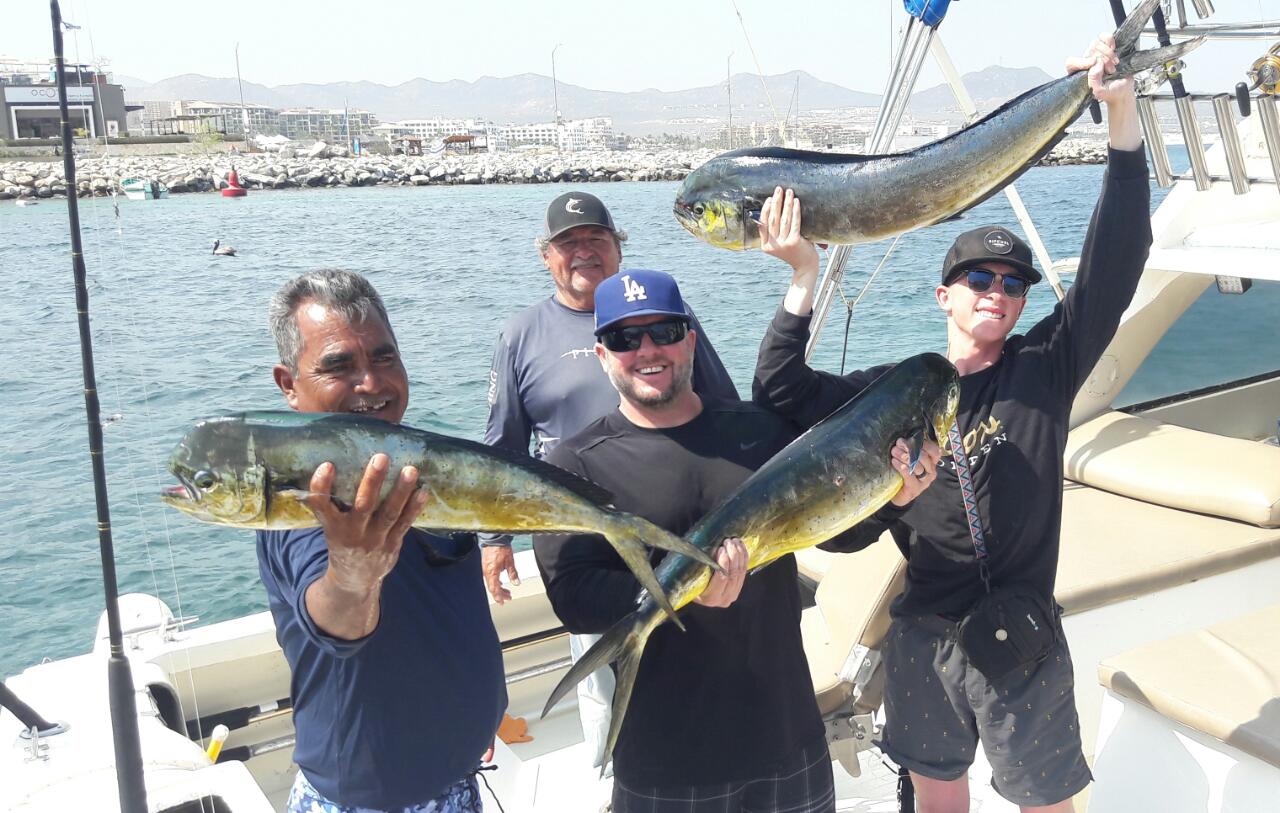 Sticking slightly closer to home, Pisces 31′ Rebecca caught and released 3 Striped Marlin between 100 and 130 lbs, hitting on live caballito bait at the 11:50 Spot. Anglers were Kevin and Ryan Nilsen from Florida. The day after again, Rebcca headed ot 11:50 to release 3 Striped marlin on caballito and also landed an approx. 15 lbs dorado there.  Pisces 31′ La Brisa also headed out to the 11:50 this same day and found 3 dorado of about between 10 and 20 lbs each which hit on live caballito between the 95 and 11:50 Spot. They also released a small striped marlin. Anglers were Bryan and Kobe Randall from CA. 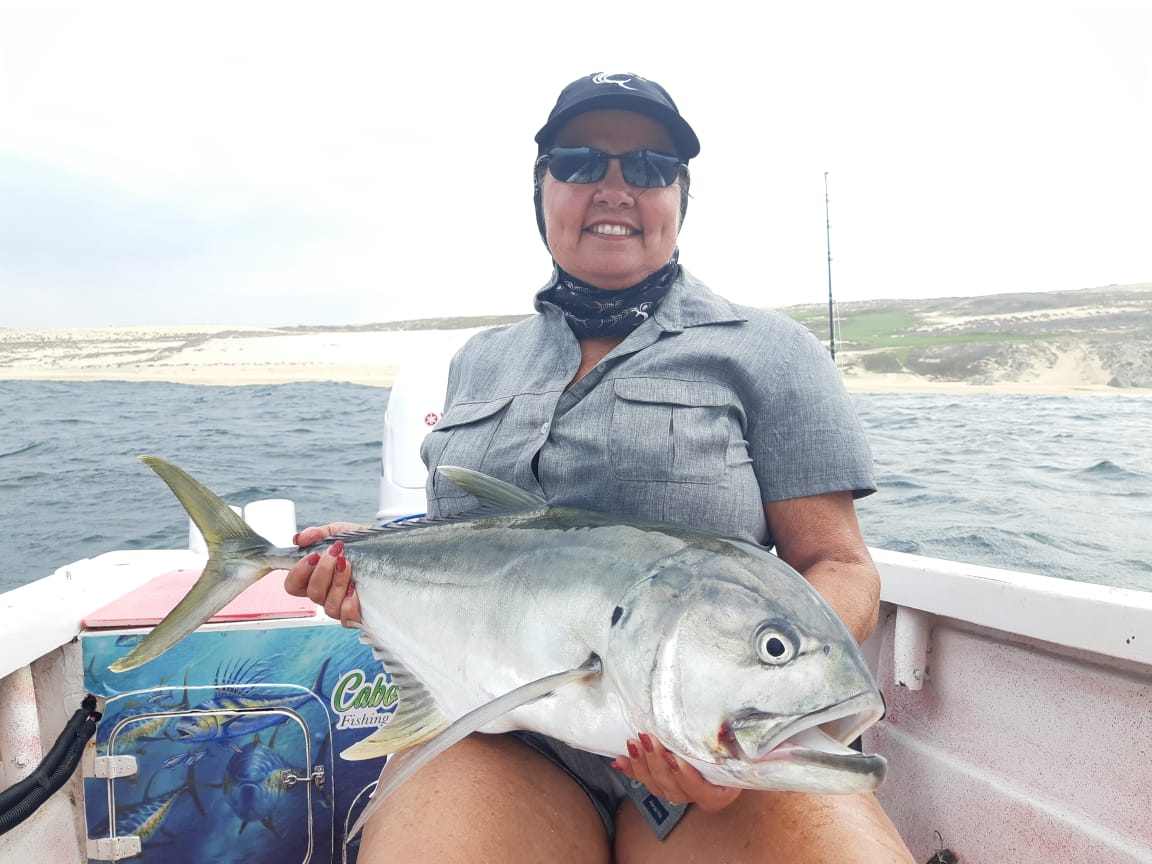 Pisces 72′ Viking Tag Team, was one of the few to find some tuna this week, they found a school of porpoise that led ’em to 6 nice yellowfin between 10 and 30 lbs each. The tuna hit on blue and white lures outside of the 11:50 Spot. They also released a nice striped marlin, hitting on ballyhoo bait.

Pisces 31′ Tracy Ann found 1 yellowfin tuna at the 11:50 Spot the day before as well, a decent size, about 30 lbs. The tuna hit on a cedar plug lure, while 2 striped marlin hit on dead caballito bait. Marlin weighed about 120 lbs each, a good day for angler Thomas Ginn From AZ. Beginning the week Tracy Ann also released 6 striped marlin, our top boat this week with releases. Largest fish was about 130 lbs, landed on lie caballito and ballyhoo bait at the 11:50. Anglers were Alexander William, Gregg Polzin and Wesley Lowell. 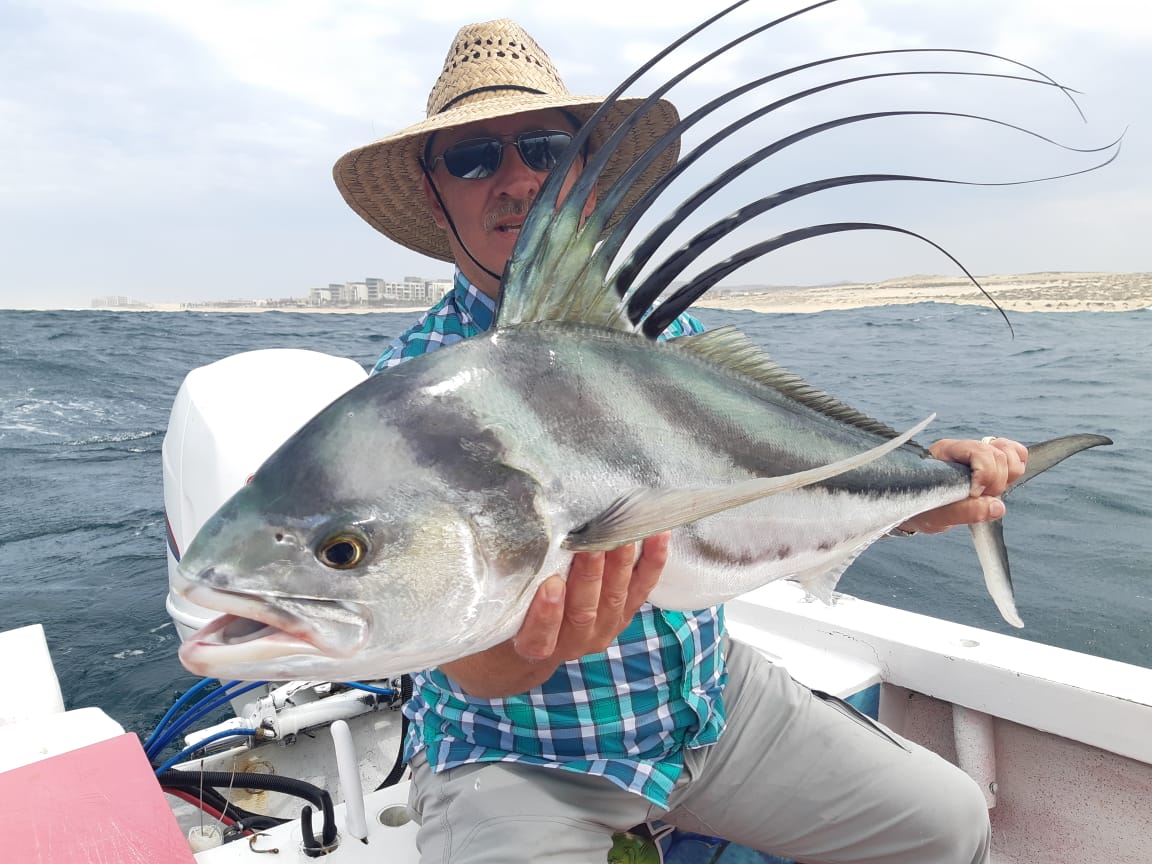 Inshore fishing highlights include a fantastic day for Pisces 23′ Panga Samantha with anglers David Clarance and Don and Rebecca Norton from TX releasing 8 roosterfish! The largest weighed about 30 lbs, with the smallest of about 20 lbs. They fished out of the Los Arcos area and used caballito and lisas as bait.

Pisces 27′ Panga Tres Amigos caught and released 2 Roosterfish, of about 15 and 30 lbs each out of the Old Lighthouse. Anglers Michael and Randy Davis, and Nathan Bingham also caught 3 red snapper on caballito bait.  The next day Tres Amigos did well again, with 2 roosterfish, 20 and 40 lbs each hitting on caballito in this same area, released. Anglers kept 1 BIG sierra mackerel, of almost 15 lbs on live caballito.

Pisces 28′ Andrea did well inshore with 3 roosterfish, all small, hitting on live caballito at Cerro Colorado area. They also released 1 jack crevalle of about 15 lbs and kept their limits on triggerfish. 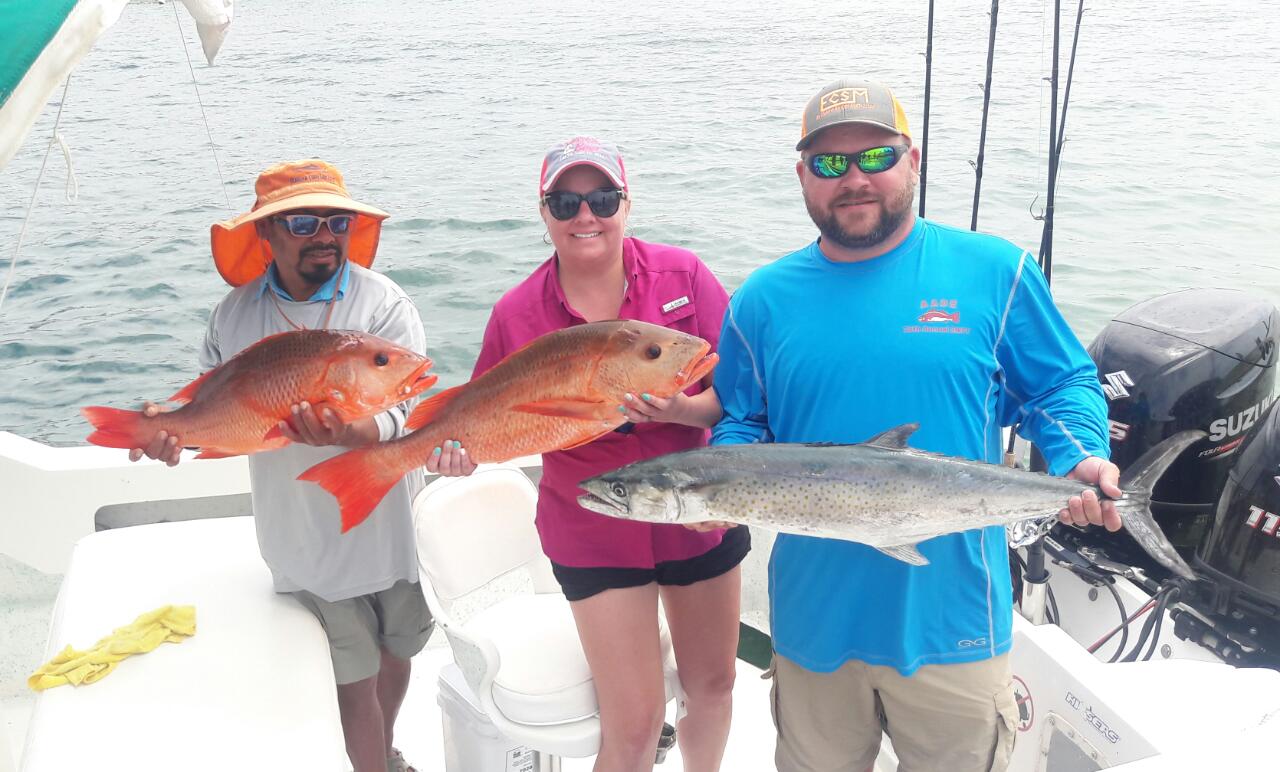 WEATHER CONDITIONS: Pacific very windy passing old lighthouse with winds up to 20+ knots on that side. Sea of Cortez a bit calmer, but winds picking up midday intermittently. Some swell. Seas of 3-5 ft average.

AVERAGE WATER TEMP: Temperatures varied from the Pacific to the East Cape side,