This week we experienced some weather here in Cabo. Wind picked up mid week and a bit of a South swell showed up towards the weekend, but even with these conditions, Pisces boats impressed with 89% of boats catching fish. They went the distance to find anglers the fish they were looking for and tried keeping out of the wind which was stronger in certain areas of the Pacific side. I myself, am always amazed at how well these crews of ours do (and anglers!), no matter what conditions or expectations you throw at them; they deliver. Tuna was the top catch this week, with those looking for marlin still finding numerous fish as well. Small game catches continue to amaze with many different species caught per boat, but the most impressive catch this week was the Pisces Valerie, which landed one of our rarest finds; a very nice sized Golden Grouper. 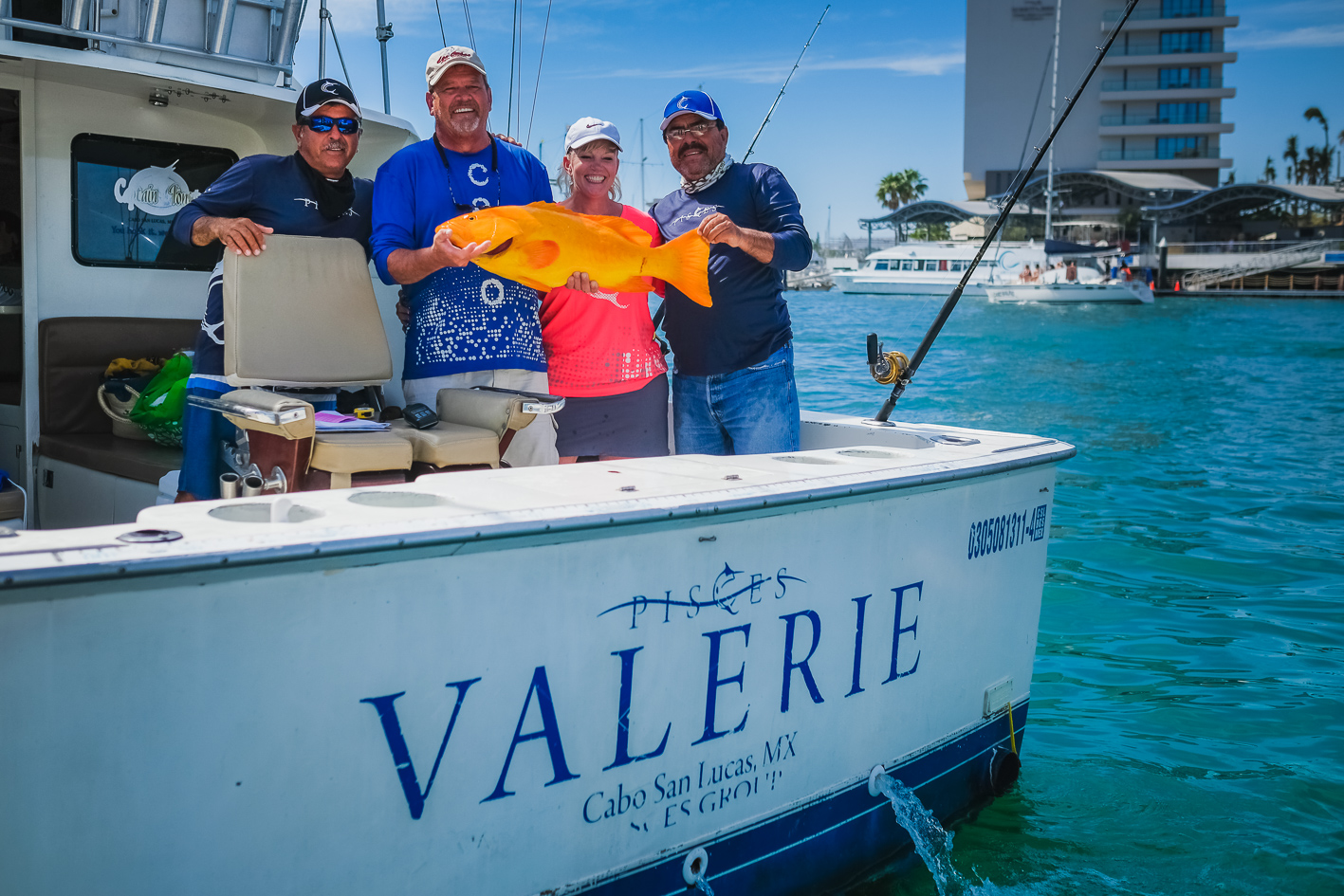 Anglers that braved the weather were rewarded this week, such as David Ross, and David, Rose and Sunny Hong who caught and released  a striped marlin each on the Pisces 31ft Tiburon, totaling 4, out at Golden Gate. The fish hit on mackerel bait, and weighed about 80, 100 and 120 lbs each.

Captain Nicolas and mate Pablo of the Pisces 28ft Adriana and sole angler Tom Wallace did very well to catch and release 3 striped marlin of about 130 lbs each out at Golden Gate on mackerel bait. 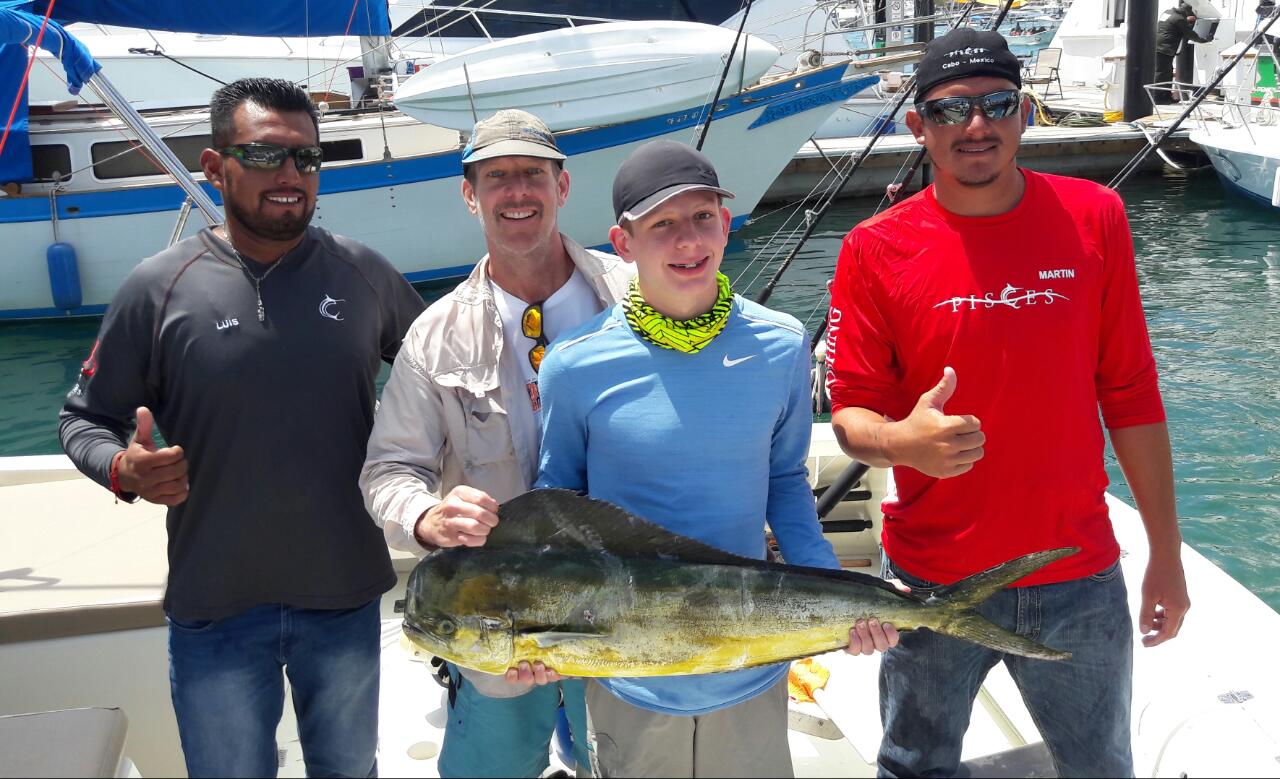 Pisces 31ft Ruthless also did well this week, with 3 striped marlin caught and released by anglers Cameron and Connor Buckingham from Yorbalinda out at Golden gate on mackerel. The fish weighed between 130 and 160 lbs each. Later on in the week the Ruthless caught and released 2 striped marlin of about 110 lbs each for anglers from New Mexico. These anglers also caught 3 sierra mackerel on hoochi lures closer to shore at Golden, as well as a 20 lbs rooster fish which they released.

Our top boat for tuna this week, was without a doubt, the Pisces 31ft Tracy Ann, catching 45 yellowfin in one day. Anglers were the Delgatty family from Colorado, who went way out towards the 110 and 120 Spots at about 41 miles to find their fish! Captain Julio Castro and Mate Martin Gonzalez put out feather lures and cedar plugs and hit the jackpot. The tuna were all football sized, with catch limites respected.

Pisces 31ft Rebecca also did well with tuna this week; the Gleason family caught 24 tuna in total, again quite the distance, at the 240 Spot 30 miles out. The tuna hit on cedar plugs and ranged in weight from about 10 to 25 lbs each.

And finding luck a bit closer in, we had the 38ft BajaMark and anglers from Maryland catch and release 16 yellowfin tuna of about 15 to 25 lbs each, at about 12 miles from the Old Lighthouse.

Pisces 35ft Valerie was one of the few this week to find luck with both Marlin and tuna in the same day. Anglers from California, caught and released 1 small striped marlin of about 80 lbs, 10 miles South of Cabo, on mackerel. Captain Roberto Sandez then went out 26 miles off of San Jaime Banks and caught 14 tuna on cedar plugs, of about 10 lbs each.

The next day, the Valerie impressed again, with Kim family anglers doing a great job catching 30 yellowfin ranging from 5 to 10 lbs each. These were landed on hoochi and feather lures 20 miles out from the lighthouse.

Saving the best for last, the Valerie and anglers Patrick Johnson and Diane Lapp caught a very rarely found, golden grouper. This fish is actually a Leopard Grouper (or Cabrilla Grouper) but in its “golden phase”. This is believed to occur because of a mutation in the fish’s genes. This only occurs in about 1 or 2 percent of this species of fish, making it truly, a once in a lifetime catch for the pair. The fish weighed about 25 lbs and was caught out at La Palmita area on the Pacific side by chumming. They also landed 10 nice sierra mackerel, between 6 and 7 lbs each, 1 grouper, 2 red snapper and 3 triggerfish. 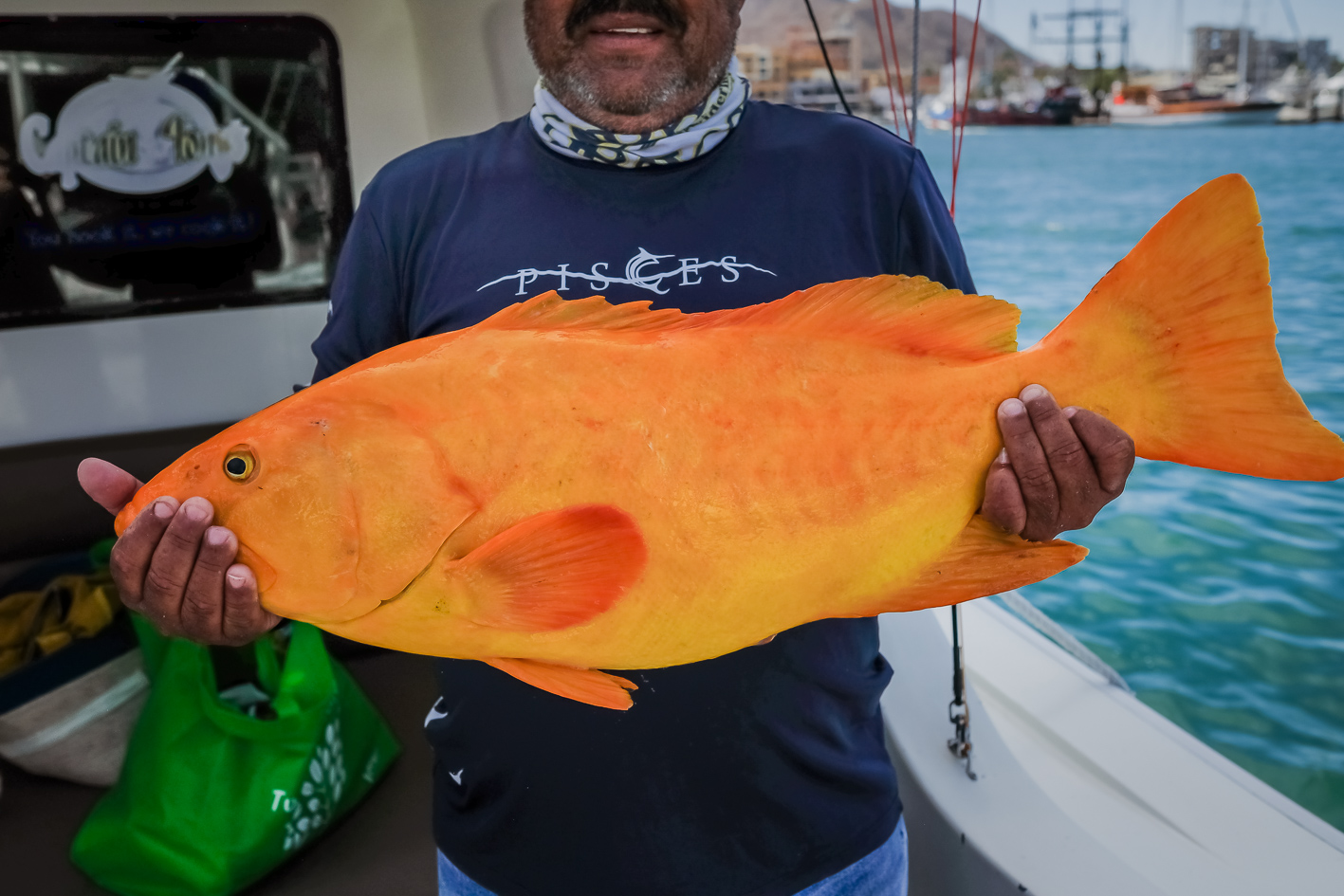 Pisces boats caught 522 fish this week, out of which 29 were billfish, 5 were dorado, 267 were tuna and 221 were other fish such as grouper, sierra, wahoo, etc.

WEATHER CONDITIONS: Beginning of the week was calm, midweek brought high winds and swell through to the weekend.