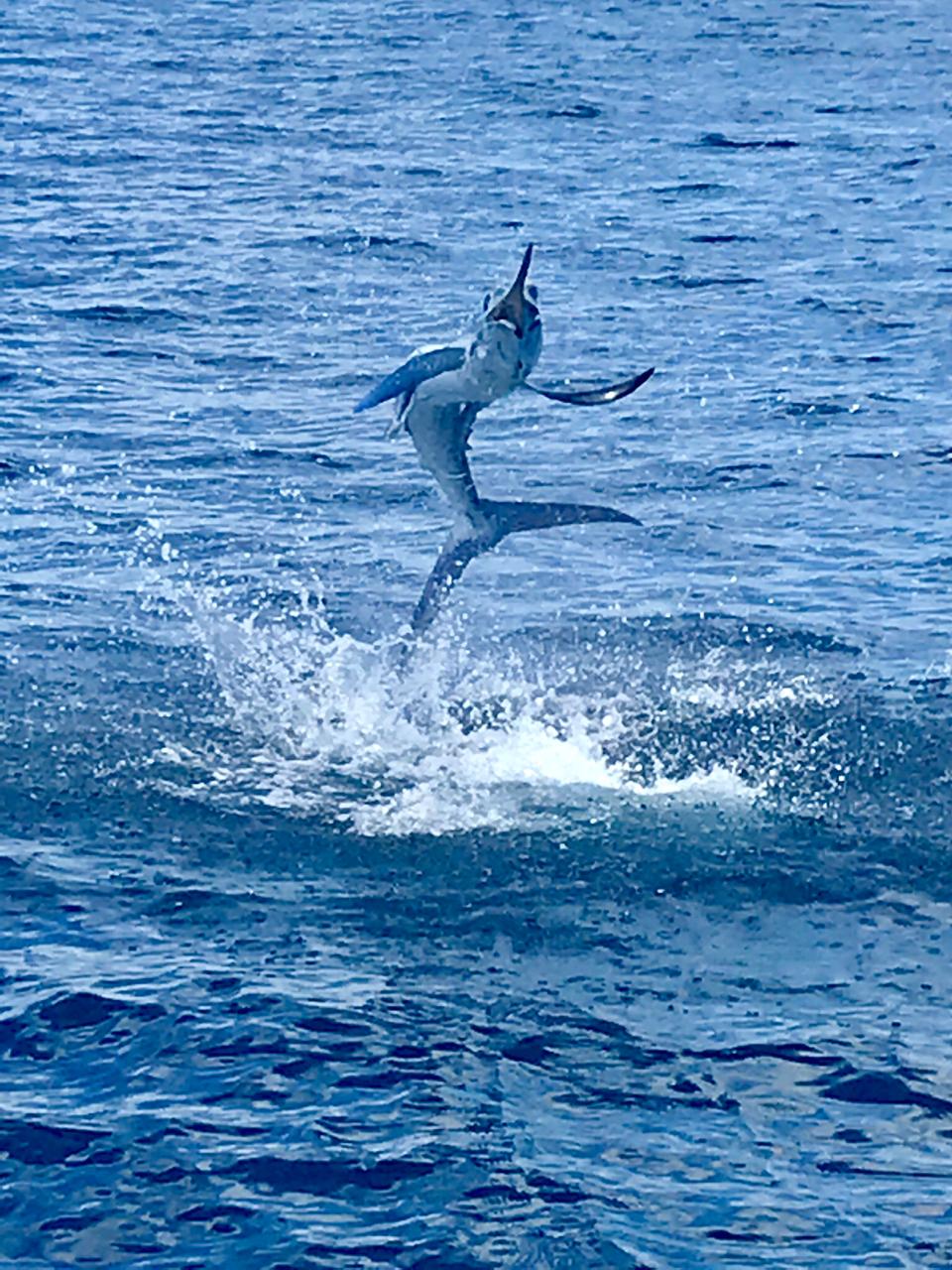 Another great week of fishing in Cabo! Quite a few highlights this time around, as we also had one of our Pisces boats, Pisces 72′ Tag Team, participate in the 1st Annual Robert Ross Tournament in Loreto, bringing back 1st place with 22 billfish released! In Cabo, we saw decent numbers of striped marlin around too, with the top boat being Pisces 31′ Tracy Ann with 5 Striped marlin released in one day. Tuna and dorado were slow, with only a few caught of each, but the inshore fishing was excelente. Again, Roosterfish, Jack Crevalle and Red Snapper, along with some Yellowtail, Grouper and Triggerfish, were the main catches.

Beginning the week off strong, Pisces 32′ Bill Collector and anglers from Texas, the Owens’ and Hauck families, did well to release 4 Striped marlin. The fish ranged in size from 70 to 140 lbs each, and hit on dead caballito bait, slow trolled, out of the 11:50 Spot. The next day, Bill Collector did well again with 2 striped marlin released on live caballito bait out of Punta Gorda. Later in the week, again, 1 striped marlin released, this time only 6 miles off of Palmilla, hitting on ballyhoo bait. Closer to Cabo, around Santa Maria area, they also caught 1 bonita on feather lure, 2 skipjacks on green/white hoochis, and 12 triggerfish which they kept for anglers from Ohio. 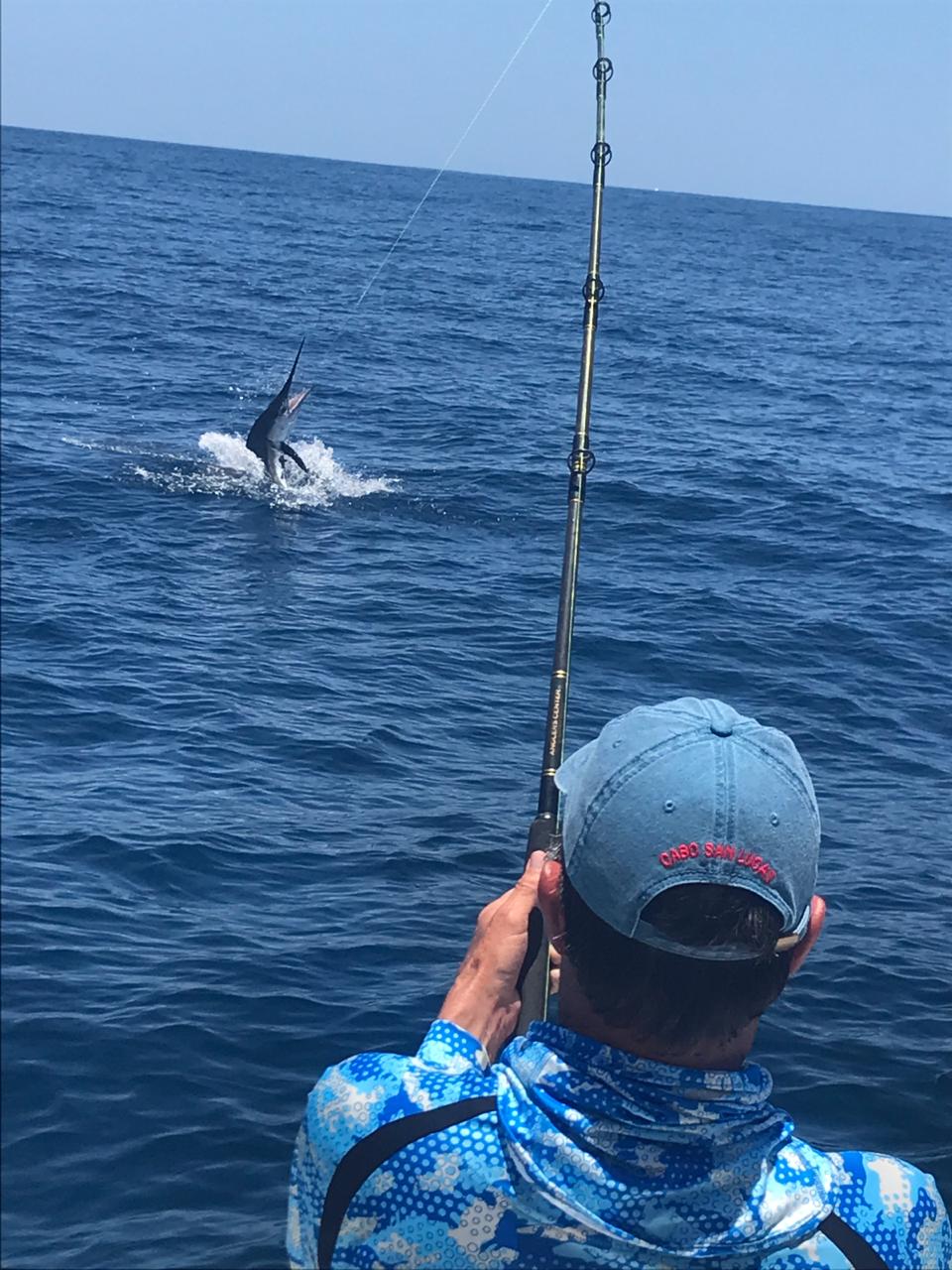 Pisces 31′ Tracy Ann, which caught the most marlin in one outing this week, found their 5 Stripeys fish from the 11:50 to the 95 Spot. They trolled dead caballito and also managed to spot a few marlin close to the surface and cast live bait. All fish were quite close in size, from 100 to 120 lbs for anglers Scott and Wesley Williams from Dallas, Texas.They also caught one of the only dorado of the week, which weighed about 15 lbs.

Pisces 42′ Caliente caught and released 3 striped marlin this same day, all between 100 and 150 lbs, hitting on ballyhoo bait at the 11:50. On their way back they headed to the reef to try and catch some eating fish and landed a monster Almaco Jack, of about 50+ lbs. 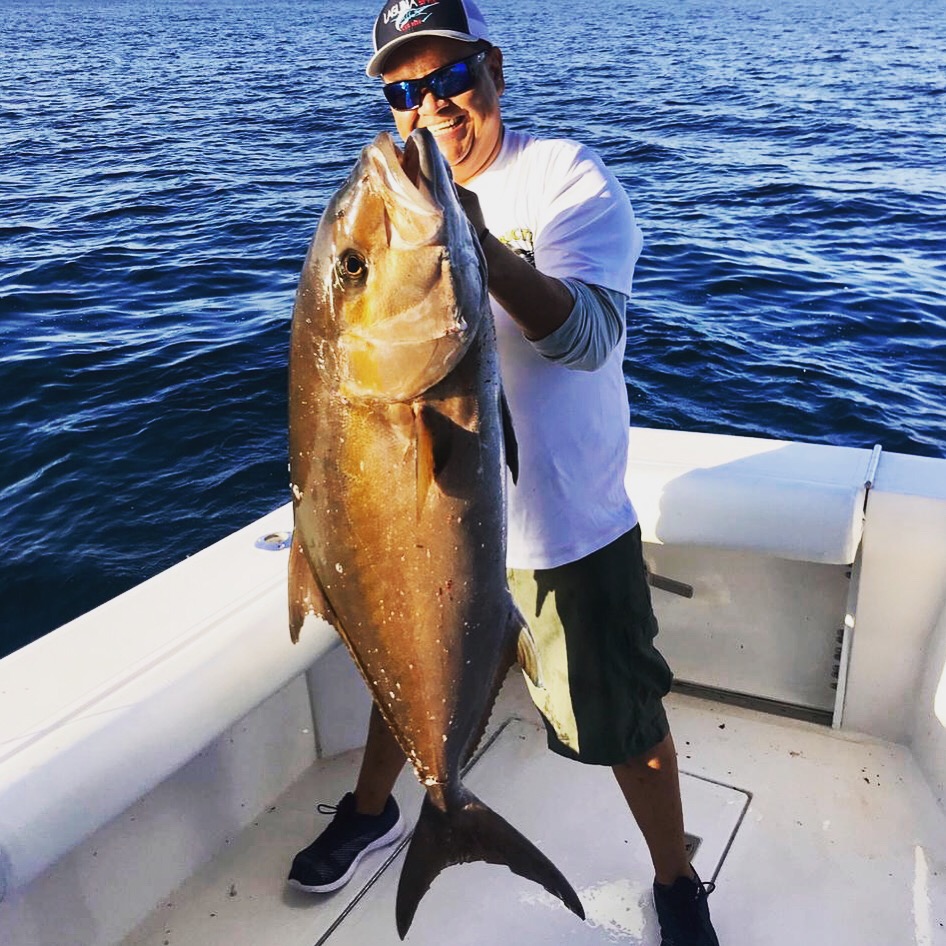 May 21st, Pisces Caliente impressed again with 3 striped marlin released, again caught on ballyhoo bait, about 5 miles out of Palmilla. Their stop inshore on their way back, again proved fruitful, with a nice 25 lbs grouper. 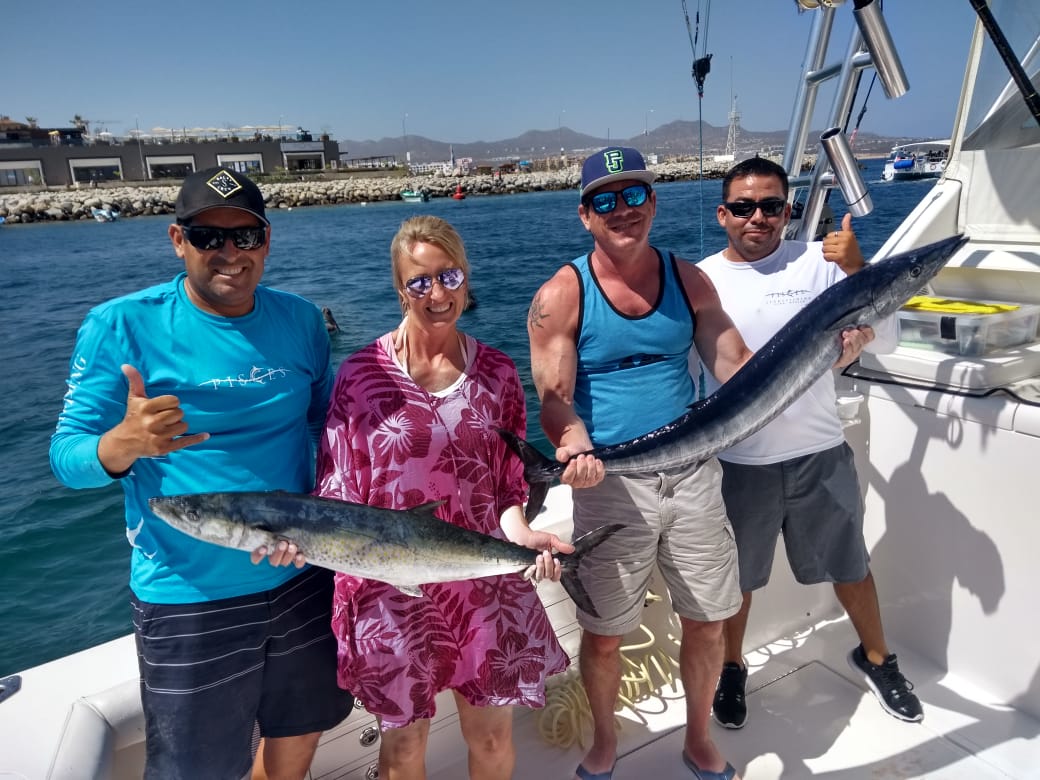 And, it seems that yes, good things come in threes, again Pisces 28′ Andrea caught and released 3 Striped marlin, between 90 and 120 lbs each between the 95 and 11:50 Spot. Angler Harold Allen also caught a small dorado on a guacamayo lure at the 95 Spot, which was released.

Pisces 52′ Free 2 Play was the only boat to land a wahoo this week, an approximate 20 pounder that hit on ballyhoo bait at the Iman Bank. They also released a small striped marlin of about 50 lbs on a blue/pink lure close to Vinorama and kept a nice 10 lbs sierra mackerel.  A great job by anglers on board, Jennifer and Kevin Gerold from TX. 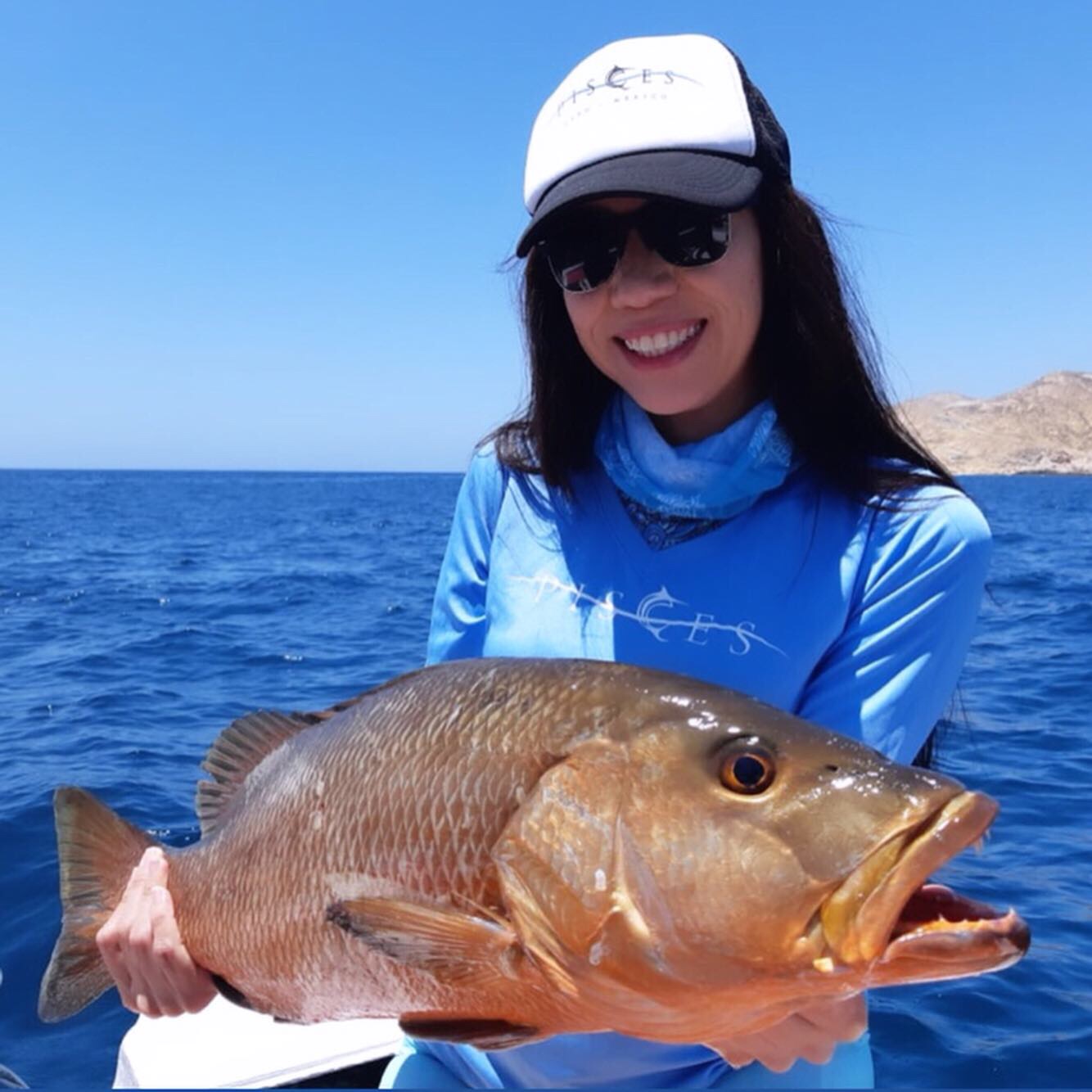 Yesenia Bassulto shows off her Red Snapper on

For inshore action this week, we saw Pisces 23′ Panga Samantha do an excellent job, consistently, starting off the week with 2 roosterfish and 1 jack crevalle released, and 2 red snapper. Anglers  were our very own, Yesenia Bassulto, Pisces Apparel Store Manager, and her husband Alberto, along with Dave Adams from Tormenter Ocean Apparel Co. The roosterfish hit early on, at the Old Lighthouse on live caballito and weighed about 10 – 15 lbs each. The Jack Crevalle was about 20 lbs and the red snappers averaged about 10 lbs as well.

Pisces 28′ Adriana also caught a nice red snapper for anglers Mark and Tracey Avarett from Louisiana, by chumming at the Barco Varado area. The also caught 12 triggerfish and a nice 20 lbs yellowtail at the Old Lighthouse. 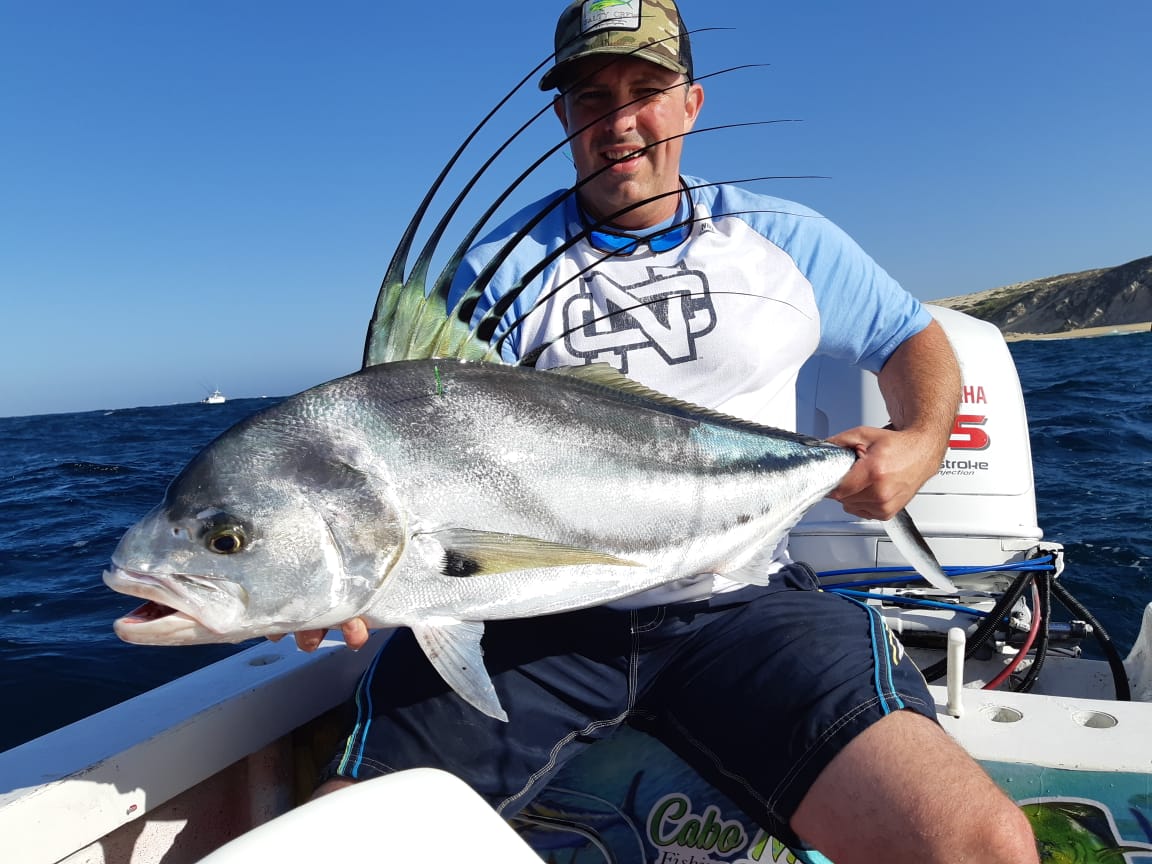 Pisces 35′ Knot Workin’ looked for inshore action this week too, with a very nice roosterfish that was pushing 50 lbs easily, successfully released.  The rooster hit on live caballito bait close to El Tule. Anglers also caught a red snapper of about 10 lbs there, along with 5 skipjacks and a bonita on feathers: green/white and hoochis, closer to Cerro Colorado.

More sierra mackerel on Pisces 24′ Anamar, 3 caught in total between 6 and 10 lbs each, hitting on green hoochis out of the Old Lighthouse. Angler Mark Averett also released a small roosterfish that hit on live bait and 1 jack crevalle. 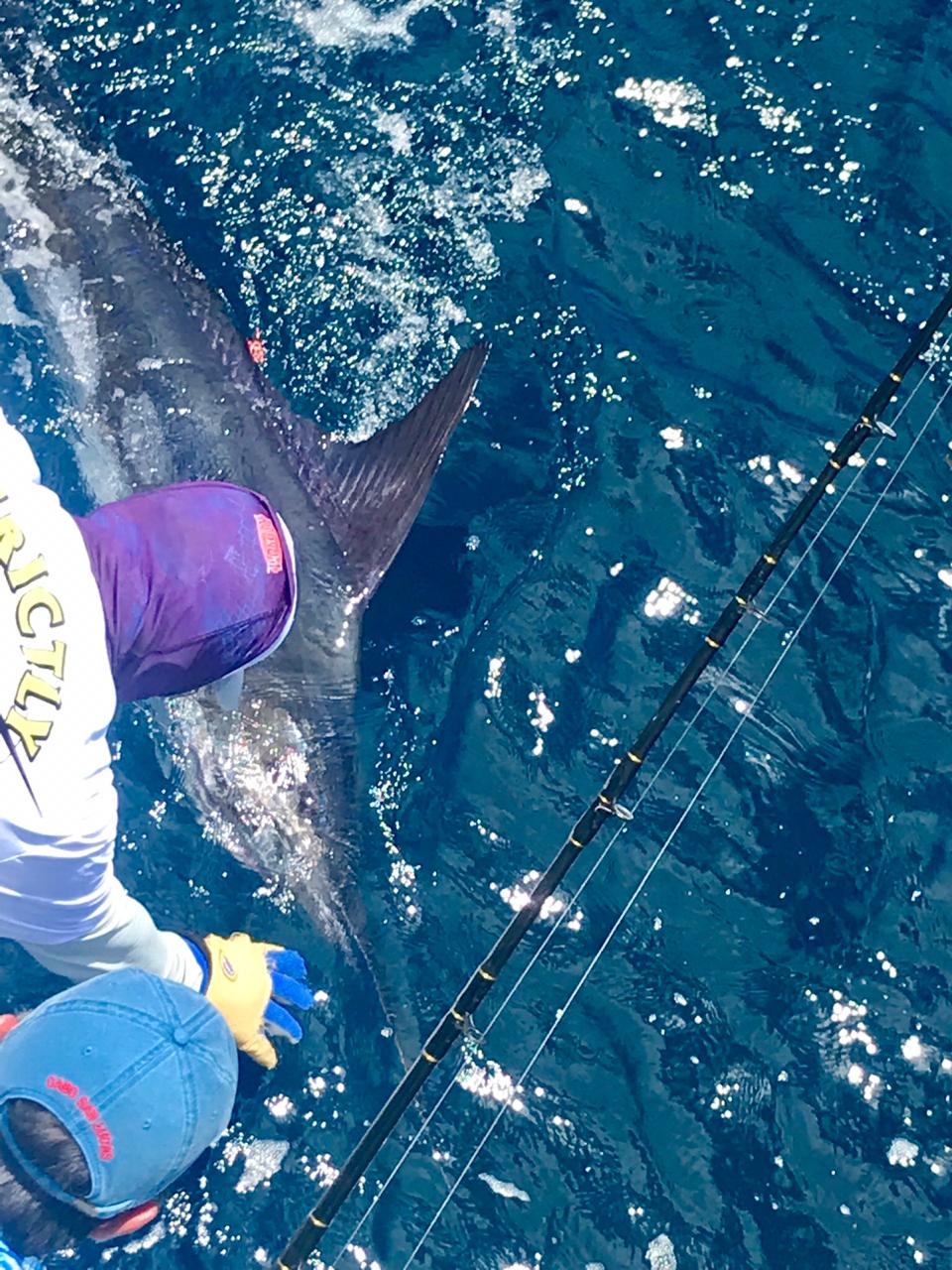 LOCATION: 11:50 to the 95 Spot mostly for malrin. Inshore fishing on both Pacific and Sea of Cortez, from Old Lighthouse throught o Santa Maria/ Chileno and San Jose.

WEATHER CONDITIONS: Beautiful sunny skies, with intermittent winds on two days of up to 15-20 knots and some swell. Other days much calmer, with seas of 3-4 ft.

AVERAGE WATER TEMP: Temperatures varied from the Pacific to the East Cape side, with Pacific about 5-7 degrees cooler.

Beginning of the week we saw warmer temperatures of up to 80F, ending the week at about 75F.