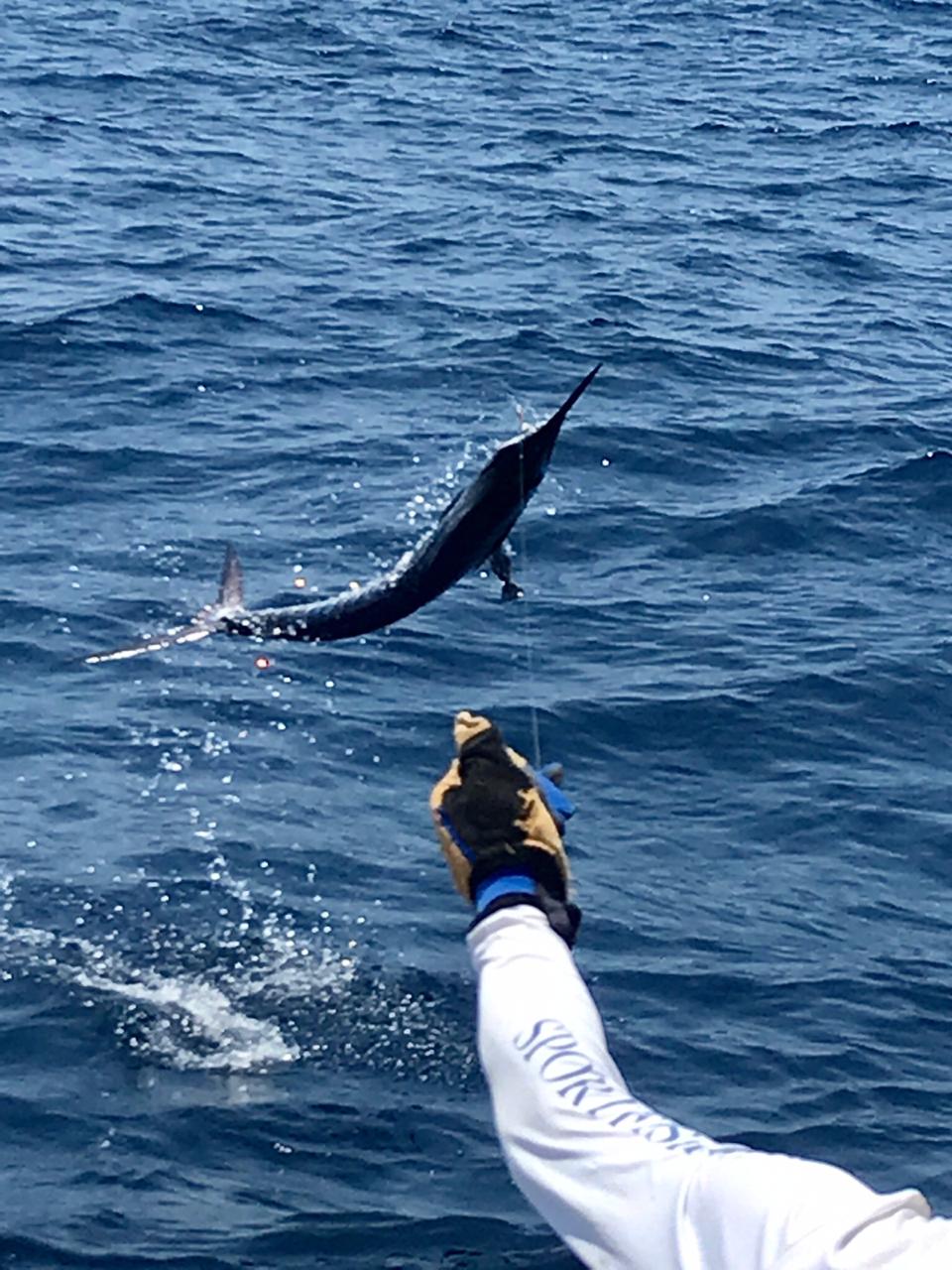 This week’s fishing was very successful; especially if you were looking to catch marlin. One hundred and twenty-two striped marlin were caught and released total by Pisces boats this week only. The week did start off slightly slower for the billfish, but picked up nicely by midweek, with several boats returning with up to 5 marlin released each. And although the weather was a little gloomy and the wind did pick up on some days, it was mostly on the Pacific side (marlin fishing has been further South or on the Sea of Cortez). Even with this, the inshore fishing on the Pacific was also fruitful, with roosterfish, sierra mackerel, snapper and yellowtail being the top producing fish. We also saw a few boats determined for tuna, find them in decent numbers. 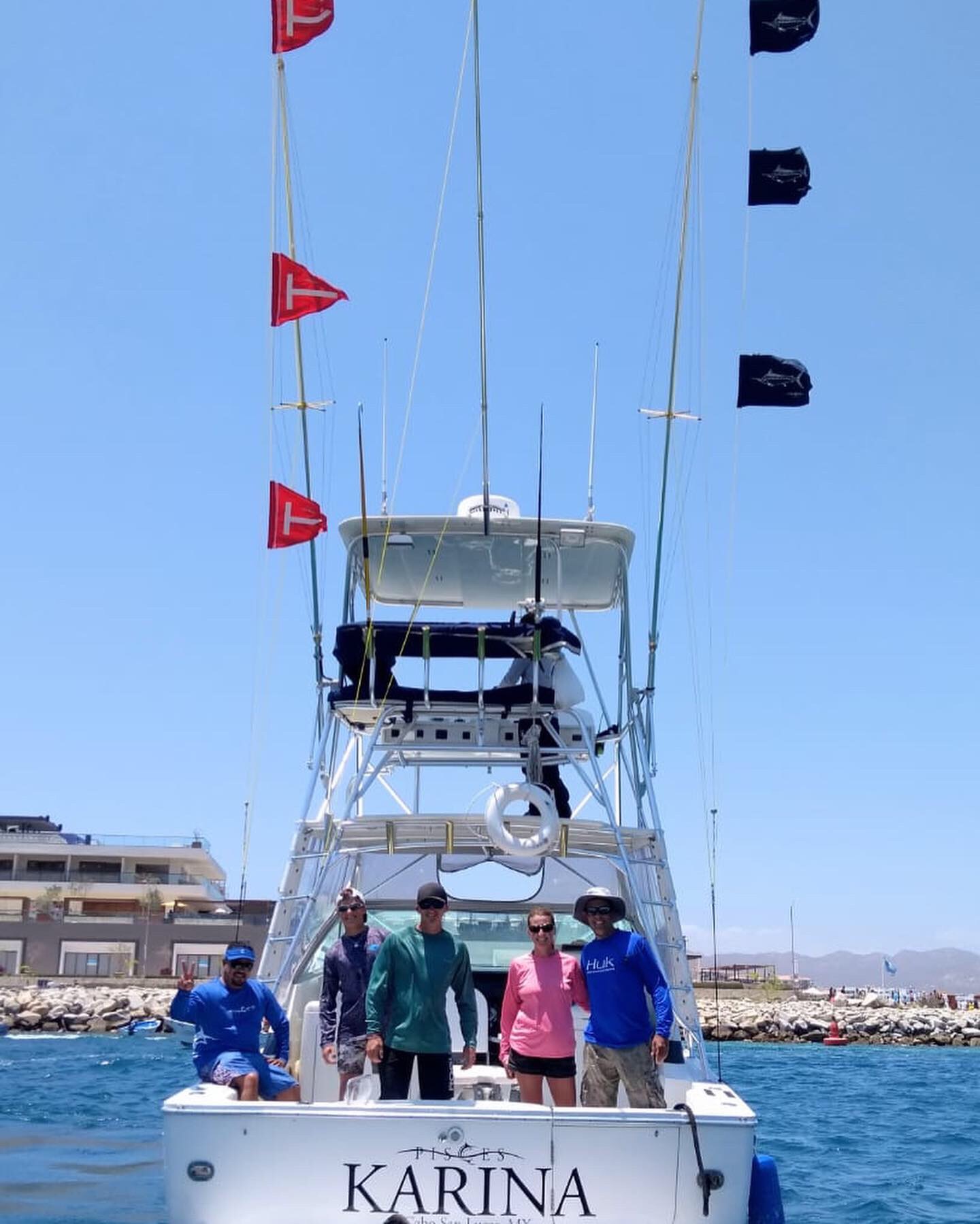 Marlin highlights for this week are too many to list here, but I have rounded up some of the top producing boats and anglers. Pisces 35′ Bill Collector 2 did well with 4 striped marlin released on live caballito bait at Cerro Colorado for Chase Hughs from Texas. And our 31′ Bertrams all did exceptionally well in the last few days of this week, all catching about 3 or 4 marlin each. Pisces 31′ La Brisa caught 3 striped marlin for Michael Hearn and Robert Foster from Florida at the 95 Spot. Marlin averaged 130 lbs each and hit on live caballito bait. The next day, the Sporrer family of anglers from Colorado caught and released 4 striped marlin between 90 and 130 lbs each at the 11:50 Spot, using dead caballito.

And longtime Pisces angler Mr. Ray Adcock from North Carolina did well on Pisces 28′ Andrea releasing 3 Striped Marlin between 80 and 100 lbs that hit on live caballito bait at Punta Gorda. He also caught 2 Jack Crevalle of about 20 lbs as well. Pisces 31′ Karina also released 3 striped marlin, all of about 90 lbs each on dead caballito bait at the 11:50 Spot for the Darnell family from Ohio.

Pisces 31′ Tracy Ann had back to back days of 4 striped marlin released, both days between the 95 and 11:50 Spots using live bait and marlin between 100 and 130 lbs each. 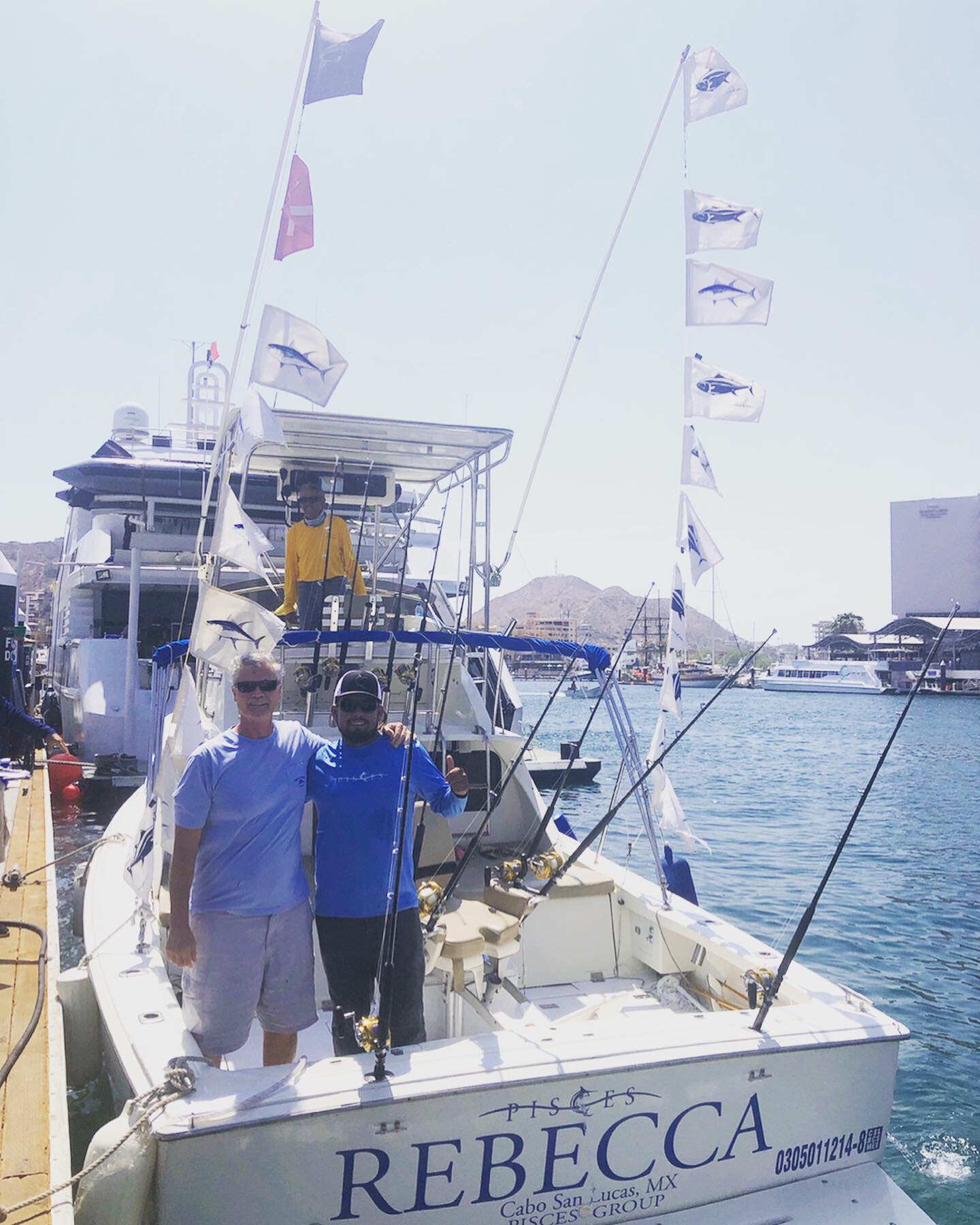 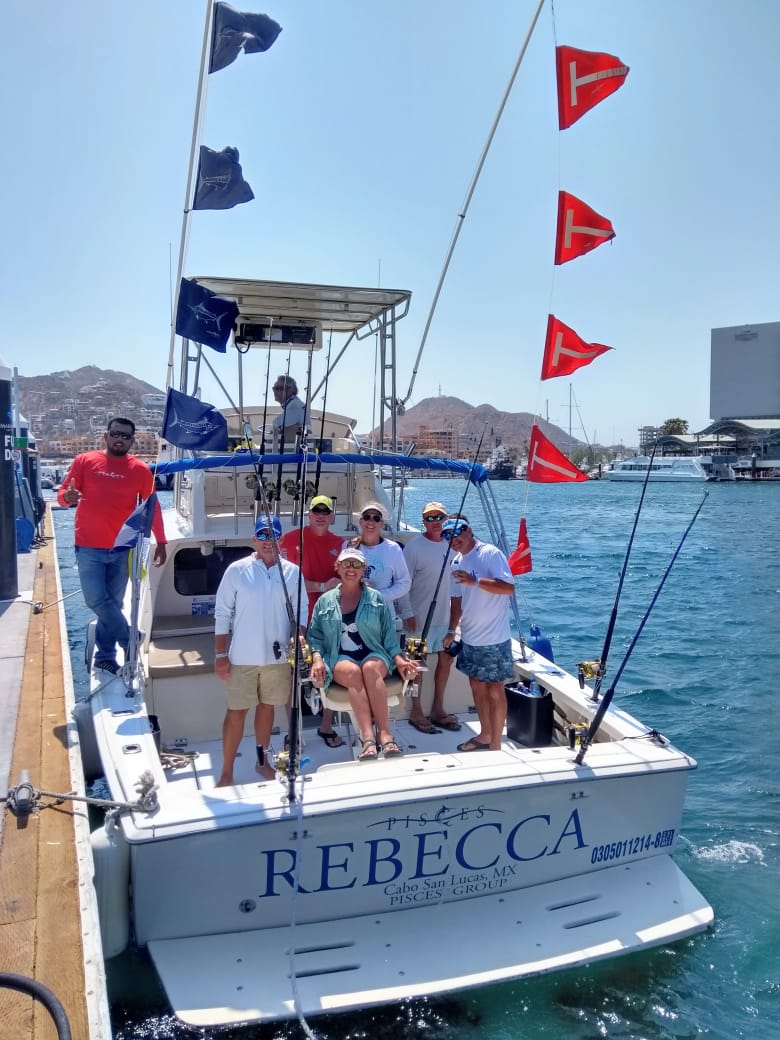 Top boat for most marlin caught in one day this week was undoubtedly Pisces 31′ Rebecca, with anglers aboard, Chris Stoudenmire, James sarahan, Paul and Torry Berry and Richard and Tomica Petty from Loxley, Alabama catching and releasing a marlin each, SIX in total. All fish hit on caballito bait at Chawita area, with marlin ranging from 120 to 160 lbs each. That wasn’t enough for these fishing machines though, as they went out again on the Rebecca and released another 5 striped marlin on live caballito, fishing between Destiladeras y Gordo Bank. Marlin ranged from 90 to 130 lbs each.

Long time angler and friend Jon Svendsen from Arizona also fished this week on the Rebecca, May 28 he released 4 striped marlin of about 140 lbs each on live caballito and mackerel at the 90 Spot.  Two days later he searched for some yellowfin tuna and found it; landing twenty for himself and the crew of 3 aboard at Destiladeras area. The tuna ranged from 10 to 35 lbs and hit on cedar plugs, and green feathers. He also released a nice 150 lbs striped marlin on live caballito. 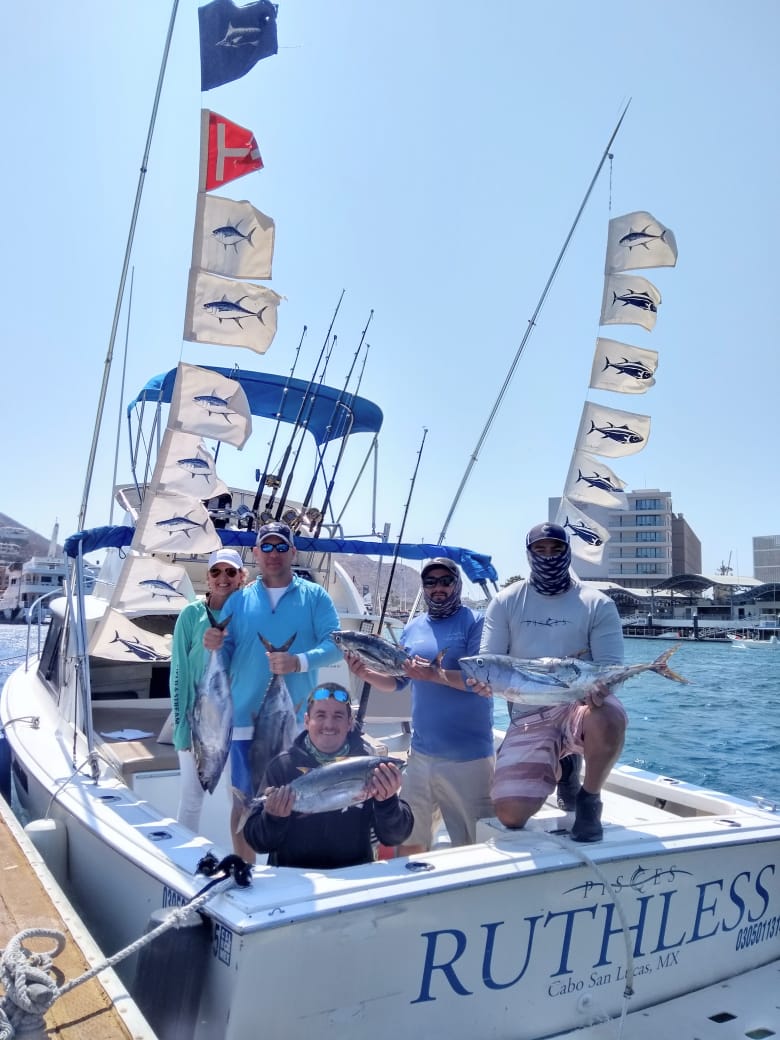 Top tuna boat was Pisces 31′ Ruthless, although they also did well with marlin in the week; for example they caught 4 stripeys of about 100 lbs each between Cerro Colorado and Chileno. May 27th they searched for tuna with anglers Miguel Lopez and Susie Brown, and successfully landed seven; all ranging between 10 and 20 lbs hitting on cedar plugs and hoochis at the Cabrillo Mount. On another day they landed 20 yellowfin, again at Cabrillo, this time using cedar plugs and feathers (blue/white) for anglers Brian and Tracy Moyse. They also released 1 striped marlin on live bait. 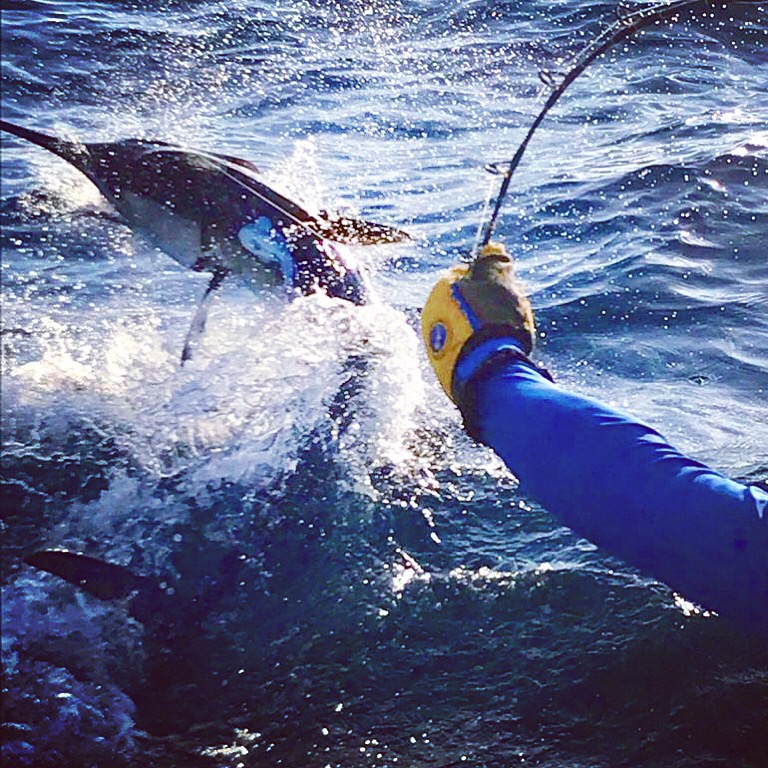 Similar to last week, we saw only saw a few small dorado. Pisces 42′ Caliente found their dorado at Cerro Colorado, but it was only small, a five pounder that hit a feather lure. But they did find two striped marlin here too, not too far from shore at all. The marlin hit on live caballito bait and weighed about 50 and 80 lbs each. The Caliente crew also headed to the reef (as they have been very lucky there lately) and kept a 20 lbs grouper which took caballito bait. And to finish it off, they also caught 4 skipjack between 8 and 10 lbs each at the 95 Spot earlier on in the day. Pisces 42′ Hot Rod also caught one dorado this week, a nice 25 pounder (approx) that hit on caballito bait at Chawita. Anglers also released 3 Striped Marlin of about 100 – 130 lbs each hitting on live caballito and a purple lure.

The biggest dorado of the week were caught on Pisces 31′ Cabolero, who found two nice 20 pounders between the 95 and 11:50 Spots, which hit on ballyhoo bait. They also caught and released 1 striped marlin nearer Chileno and 3 skipjacks. Angler was Mr. Angel Muntaner. 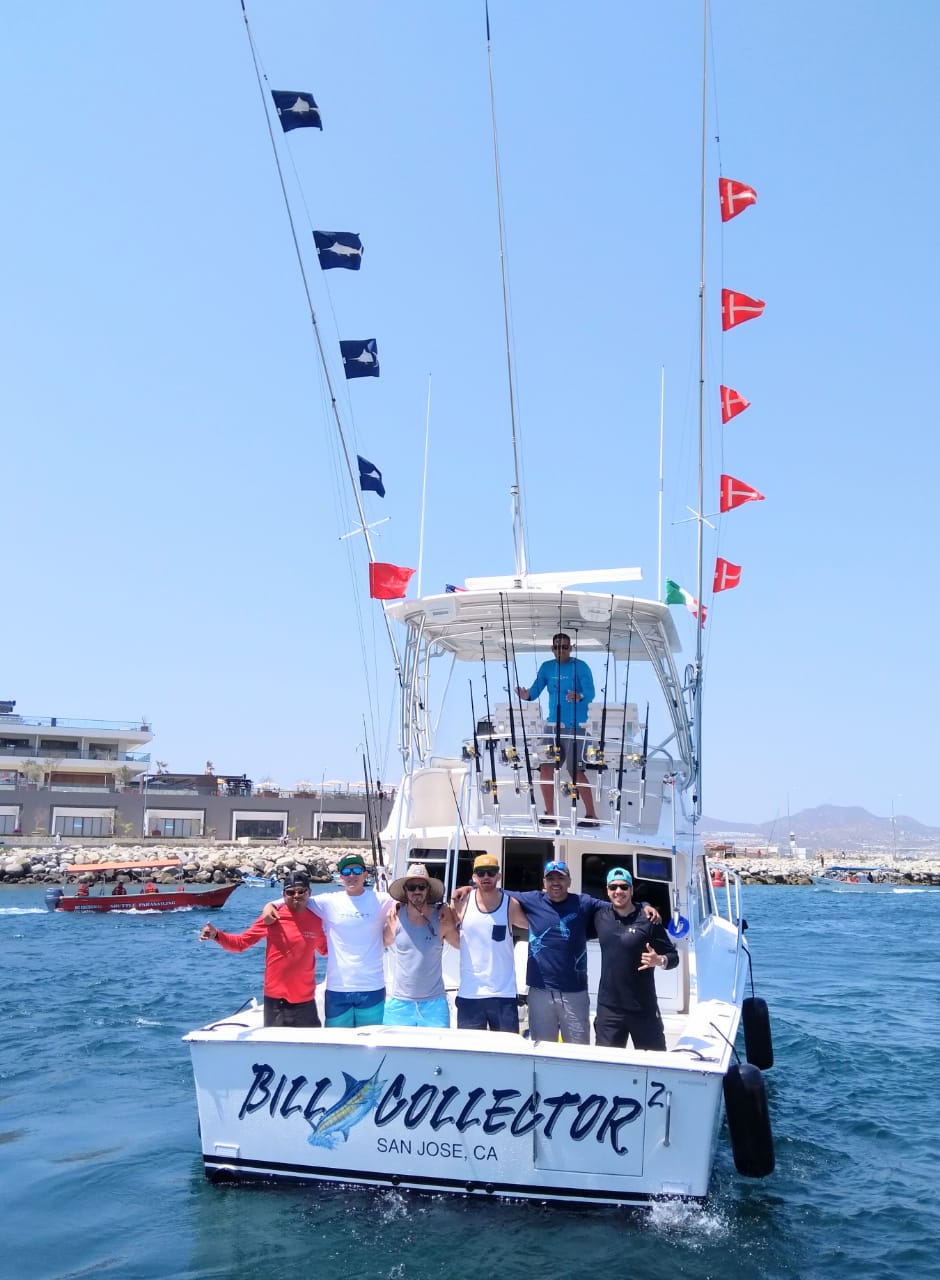 Pisces 35′ Bill Collector 2 continued with an excellent week, and also found a few dorado, one small of about 6 lbs (released0 and the other of about 10 lbs. These hit on live caballito and on ballyhoo bait close to Chileno area. They had luck with a marlin release too close by to here, a 120 lbs stripey hit on the ballyhoo nd was successfully released. Then, anglers Jeremy and Miles Goebo from Texas decided to look for some roosterfish and headed to the Pacific, successfully releasing two very nice roosters, one of about 15 lbs and the other about 30 lbs which hit on live bait out of the Old Lighthouse. They also kept a nice Red Snapper of about 15 lbs that hit on live bait.

Pisces 25′ Panga Poseidon also did well at the Old Lighthouse with the roosterfish this day, catching ad releasing two of about 20 lbs each. Anglers were Ron and Brandon Sapalo from Iowa.

Pisces Super Panga 27′ Tres Amigos did well midweek with 1 Jack Crevalle released (15 lbs) at the Old  Lighthouse and 4 red snapper, ranging from 15 to about 30 lbs each. Anglers Kathleen and Michael Moore from Denver also released a small skipjack. 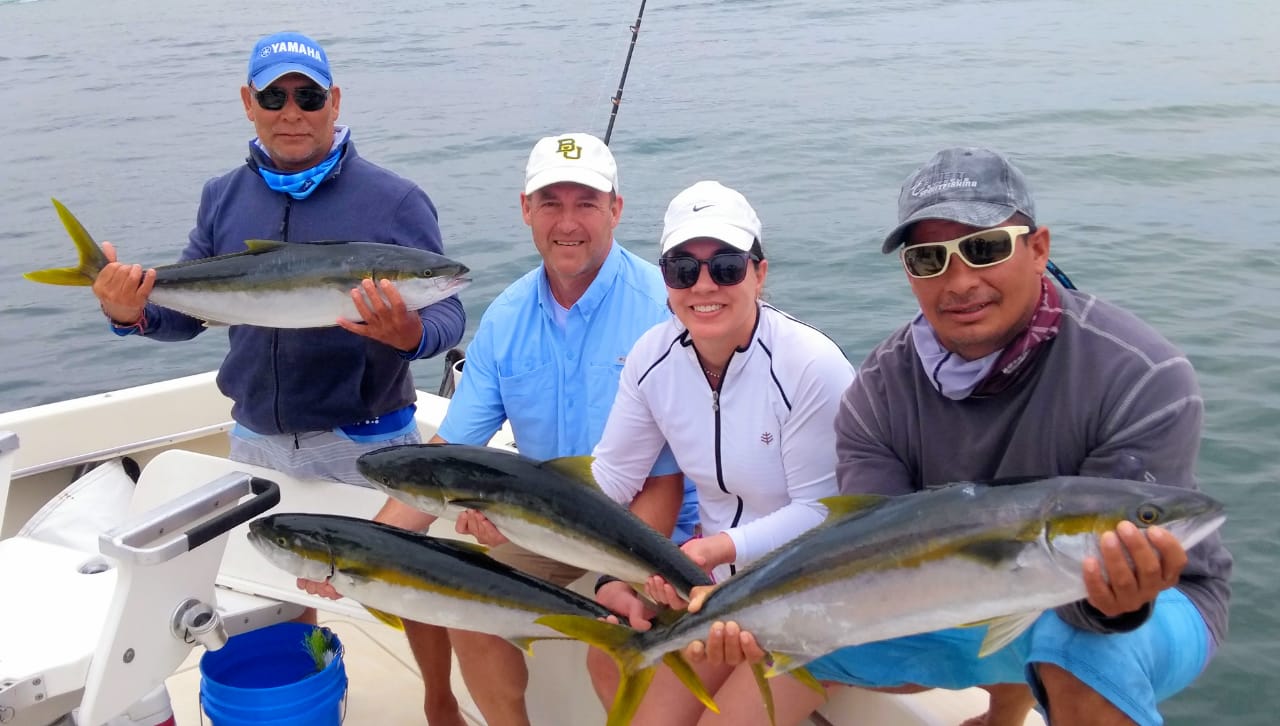 Pisces 31′ Dream Catcher  did well with 7 Yellowtail for Amy and Keith Casseri, using yoyos at Las Margaritas on the Pacific.

And last but not least, Pisces 24′ Panga Anamar caught and released 1 roosterfish of about 18 lbs on caballito bait, again, at the Old Lighthouse for Audra Fowler and Derek Lambeth. They also kept a red snapper and 4 sierra mackerel which hit on hoochis at Peregal and released a jack crevalle of about 10 lbs.

LOCATION: Marlin: 11:50 to the 95 Spot, Cerro Colorado, Chawita, Inshore fishing on both Pacific and Sea of Cortez, mostly from the Old Lighthouse through to Santa Maria/ Chileno

WEATHER CONDITIONS: Slightly overcast mostly on Pacific, with winds up to 15 knots on that side. Sea of Cortez calmer in all respects. Seas of 3-4 ft average.

AVERAGE WATER TEMP: Temperatures varied from the Pacific to the East Cape side, with Pacific about 5 degrees cooler. Average 76-80 F. 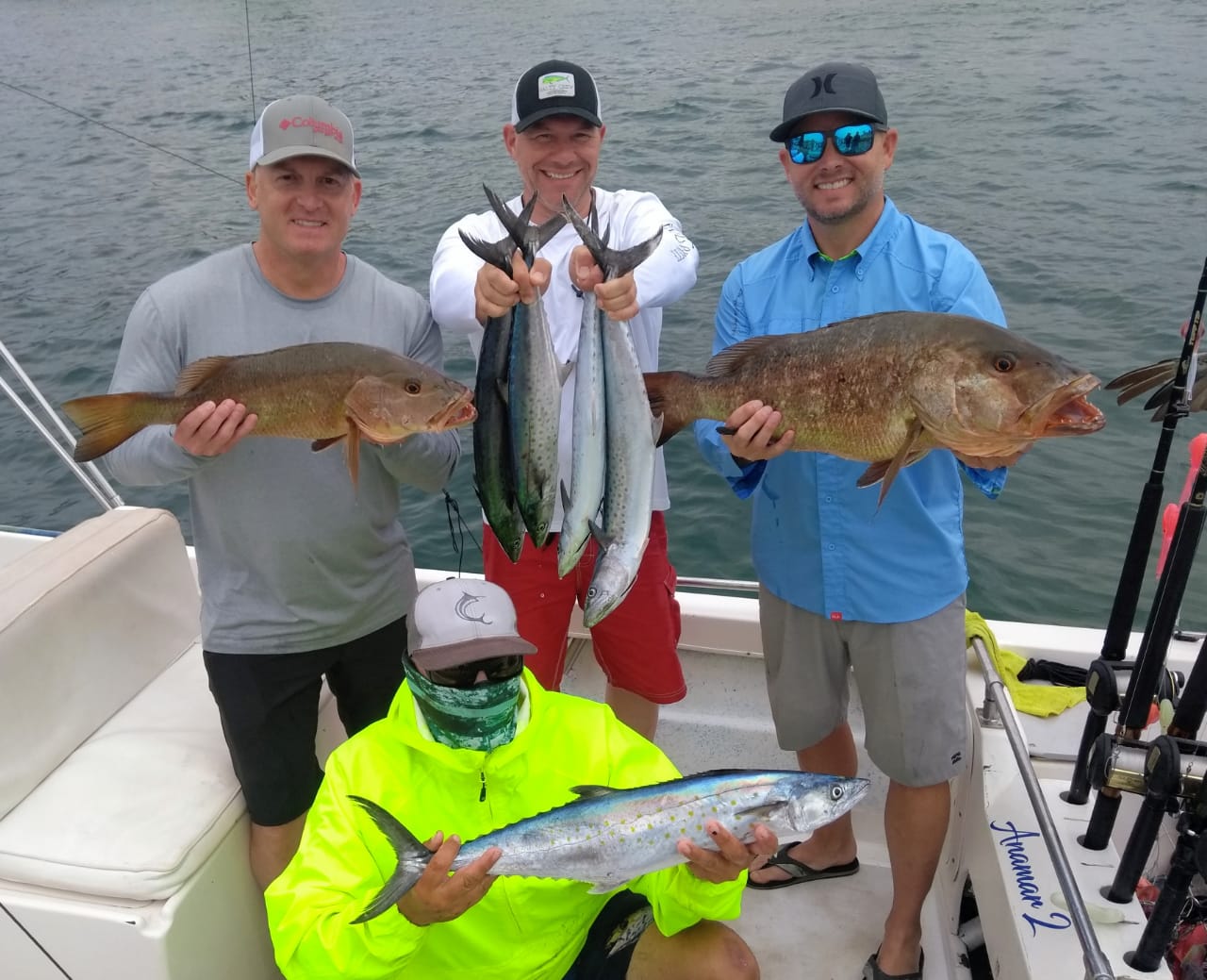